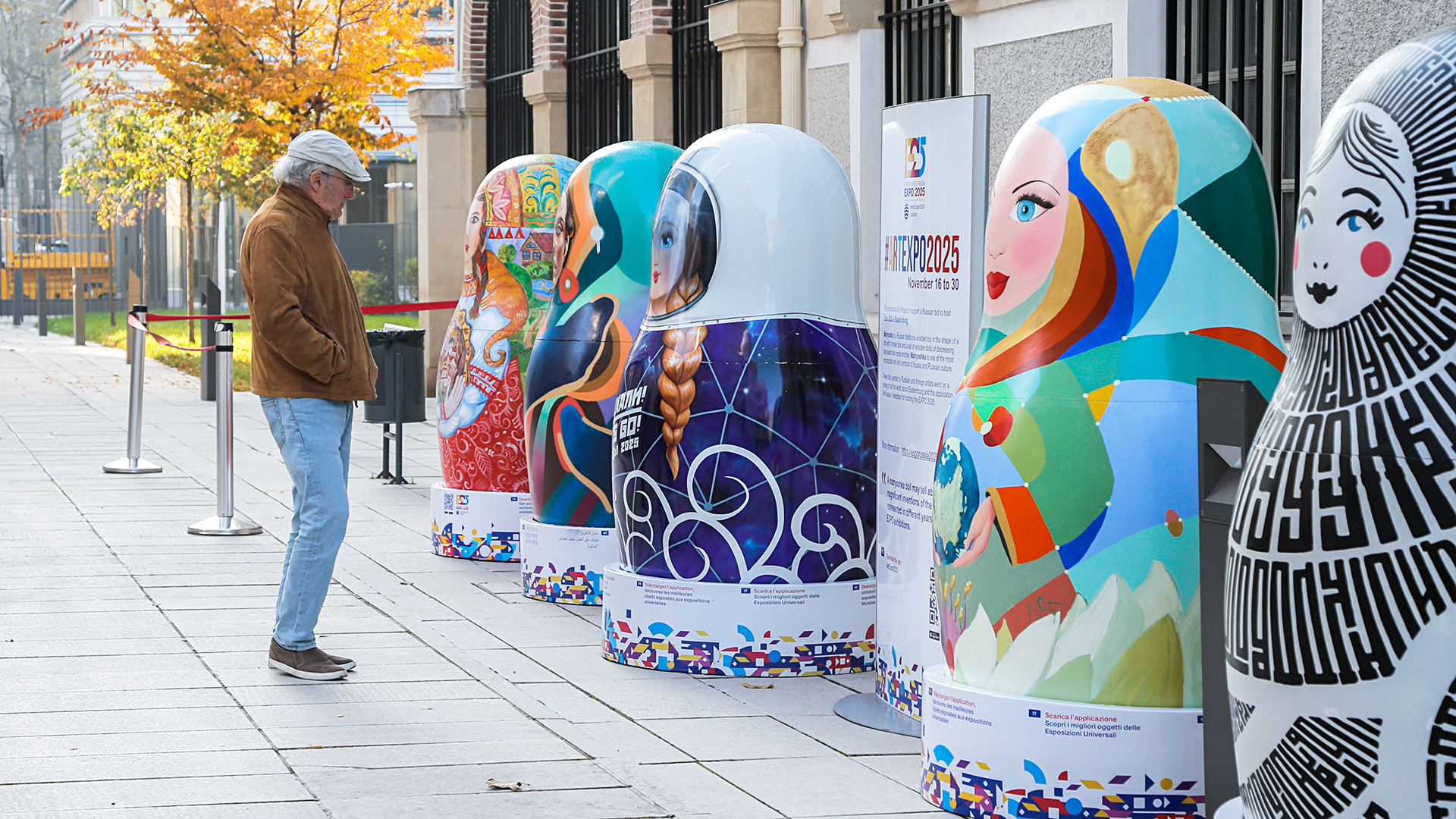 Russian Expo 2025 bid committee
Traditional Russian figures from Yekaterinburg graced art galleries and other venues in 10 cities around the world. Where are they now?

If you happened to be in Paris in late November 2018, you could not have missed an invasion of matryoshka dolls outside the Russian Center for Science and Culture. Twenty huge art objects painted by artists from all over the world were part of a campaign to support Yekaterinburg's bid to host World Expo 2025. Before coming to Paris, each of the giant matryoshka dolls had been to one of a dozen major cities around the world.

Each of the participating cities hosted two matryoshkas: one painted by a foreign artist, the other by a Russian, said Konstantin Pudov, head of the Yekaterinburg office of the Russian Expo 2025 bid committee. 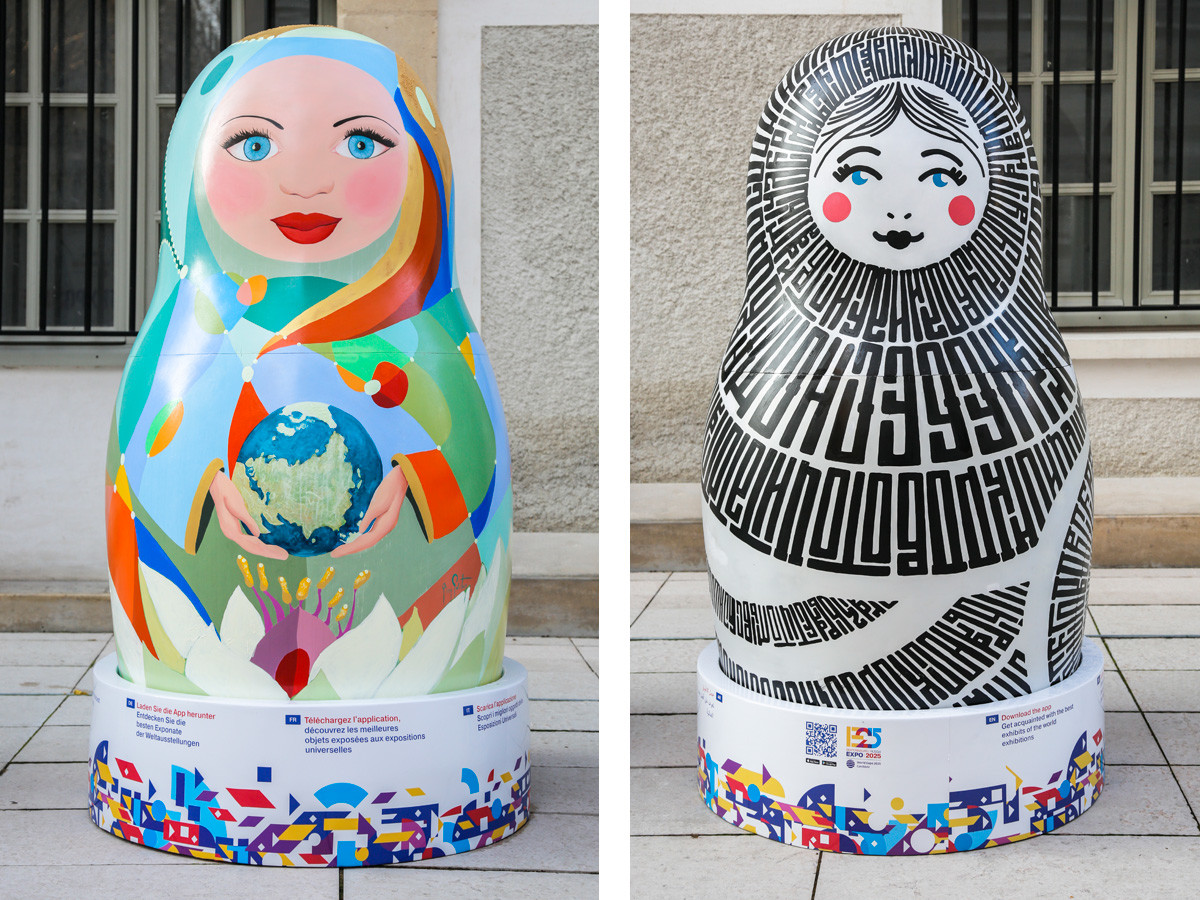 The first Spanish matryoshka doll was painted by famous artist Gina Portera, who drew her inspiration from the colors of the Urals landscape and Yekaterinburg. The message of her work is that new technologies cannot be created without love for our planet. The second matryoshka was decorated by artist Pavel Agalakov in a fancy pattern evocative of Nikola Tesla, whose discoveries transformed the world. 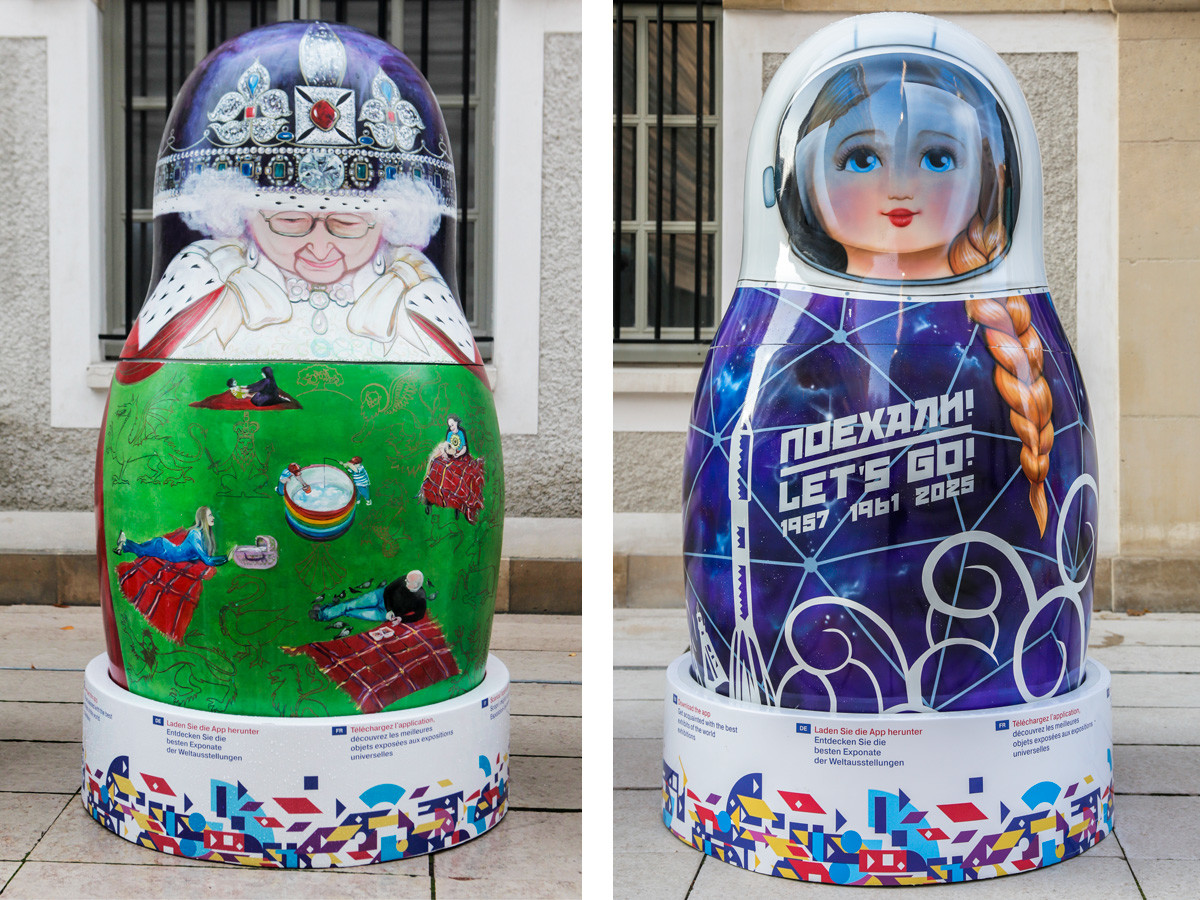 The matryoshka doll painted by Daniel Ponomari has two faces: on one side, Queen Elizabeth II, and on the other, Freddie Mercury. Its message to people is to be good and think about the future of the planet. Dmitry Shishkin devoted his matryoshka to the launch of the first and the first manned space flight. 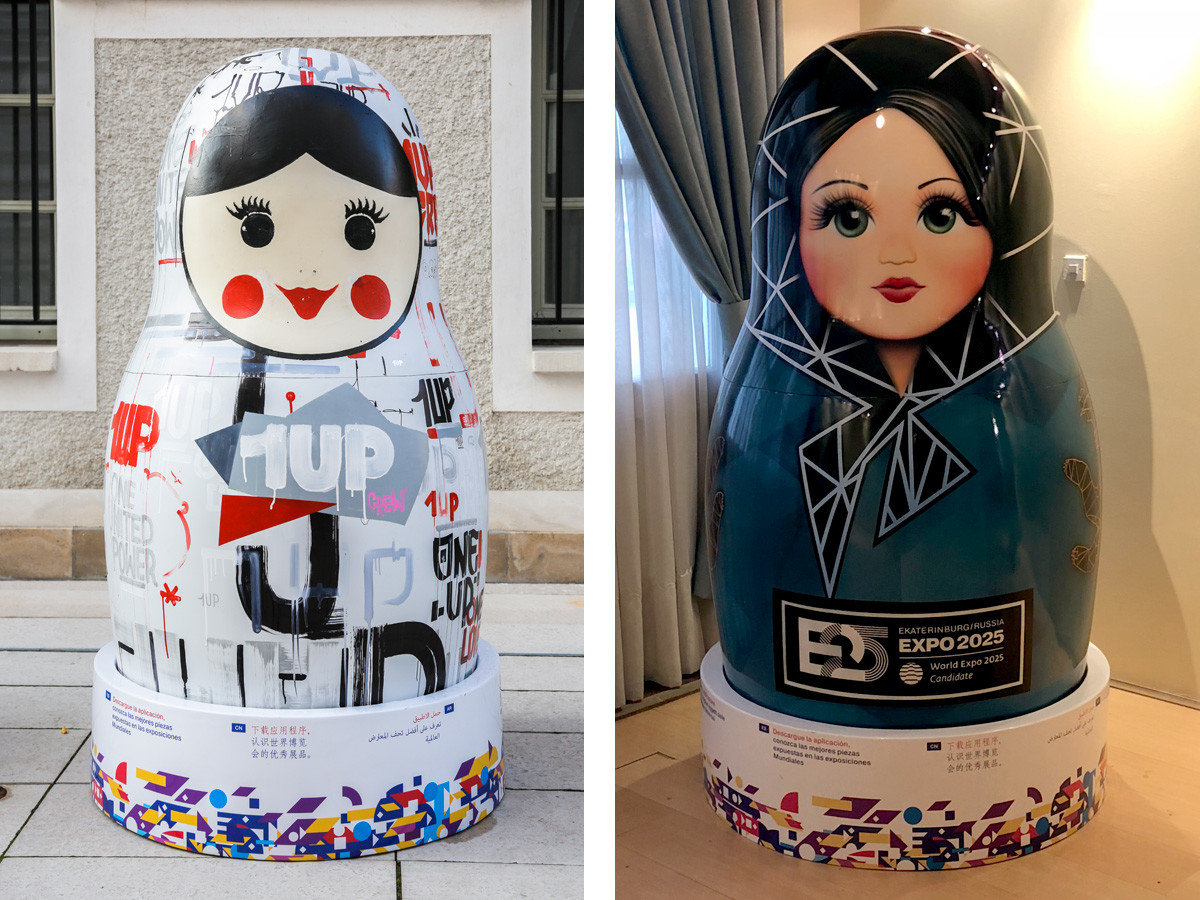 Belgian artist 1up_crew turned the traditional Russian doll into a modern woman, while Dmitry Shishkin dressed his matryoshka in a pattern looking like neural networks. 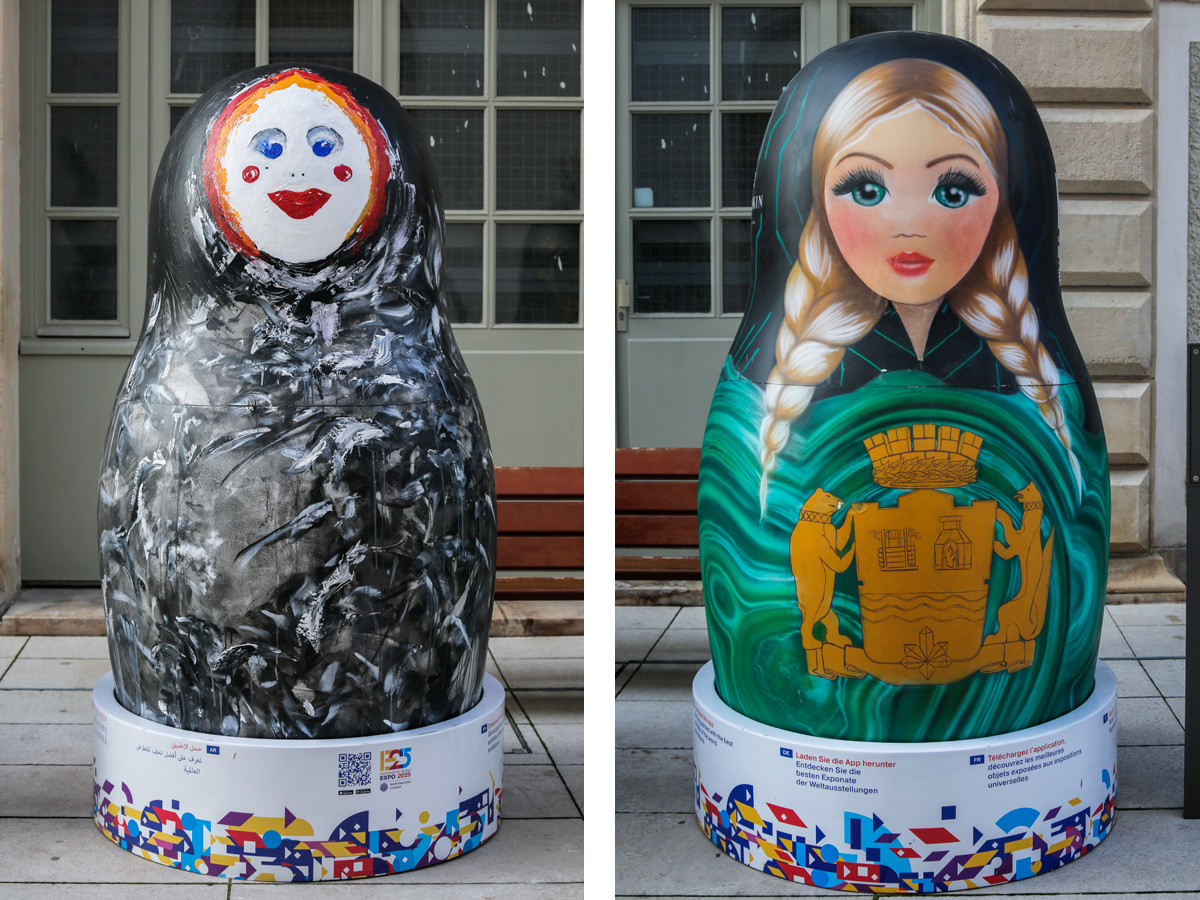 Alexandre Richelieu Beridze created an abstract matryoshka doll, but with an optimistic outlook. Dmitry Shishkin juxtaposed it with a "malachite" matryoshka, inspired by Pavel Bazhov's fairy tales about the Mistress of the Copper Mountain. 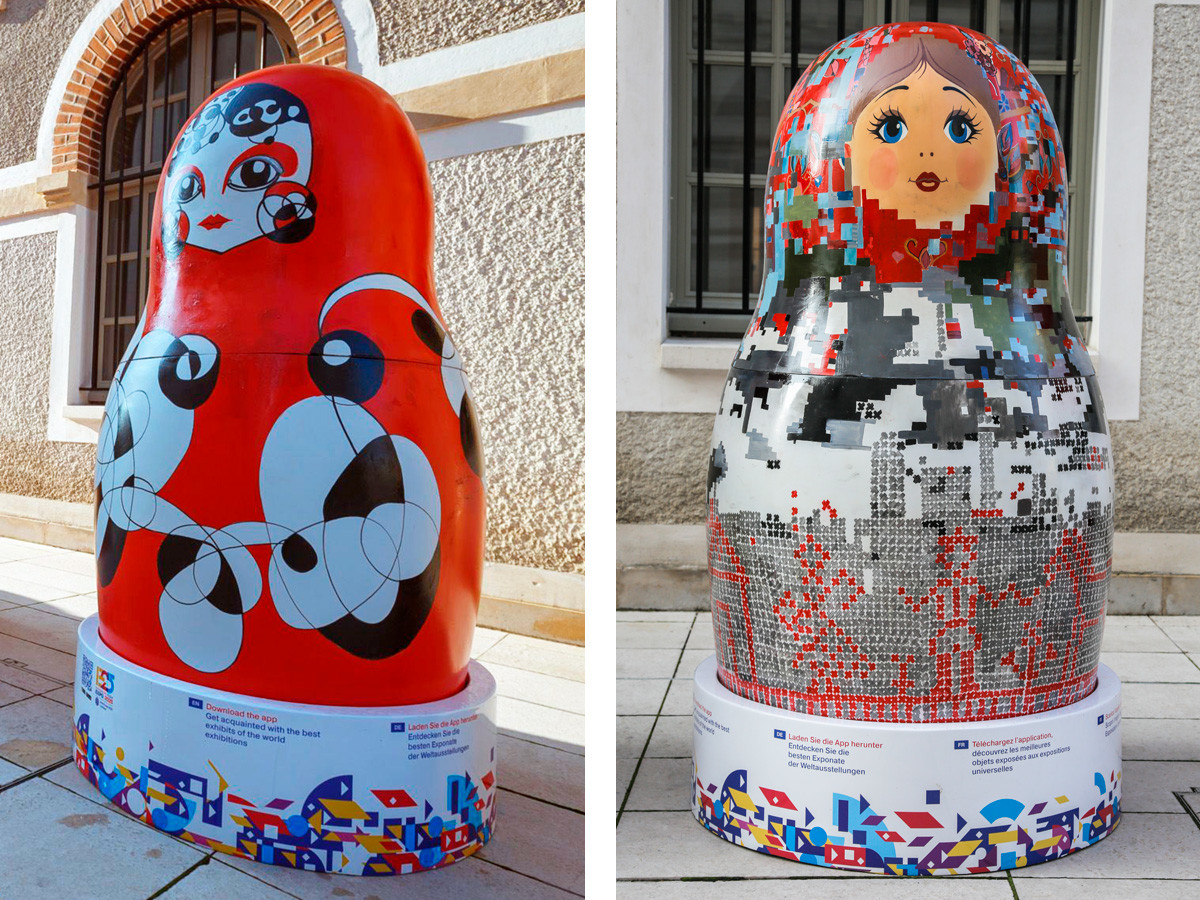 The bright red matryoshka by Giuseppe Casafina is a reference to the works by Russian avant-garde artists of the early 20th century. While Tim Avvakumov's installation in a pixel dress symbolizes the world's transformation. 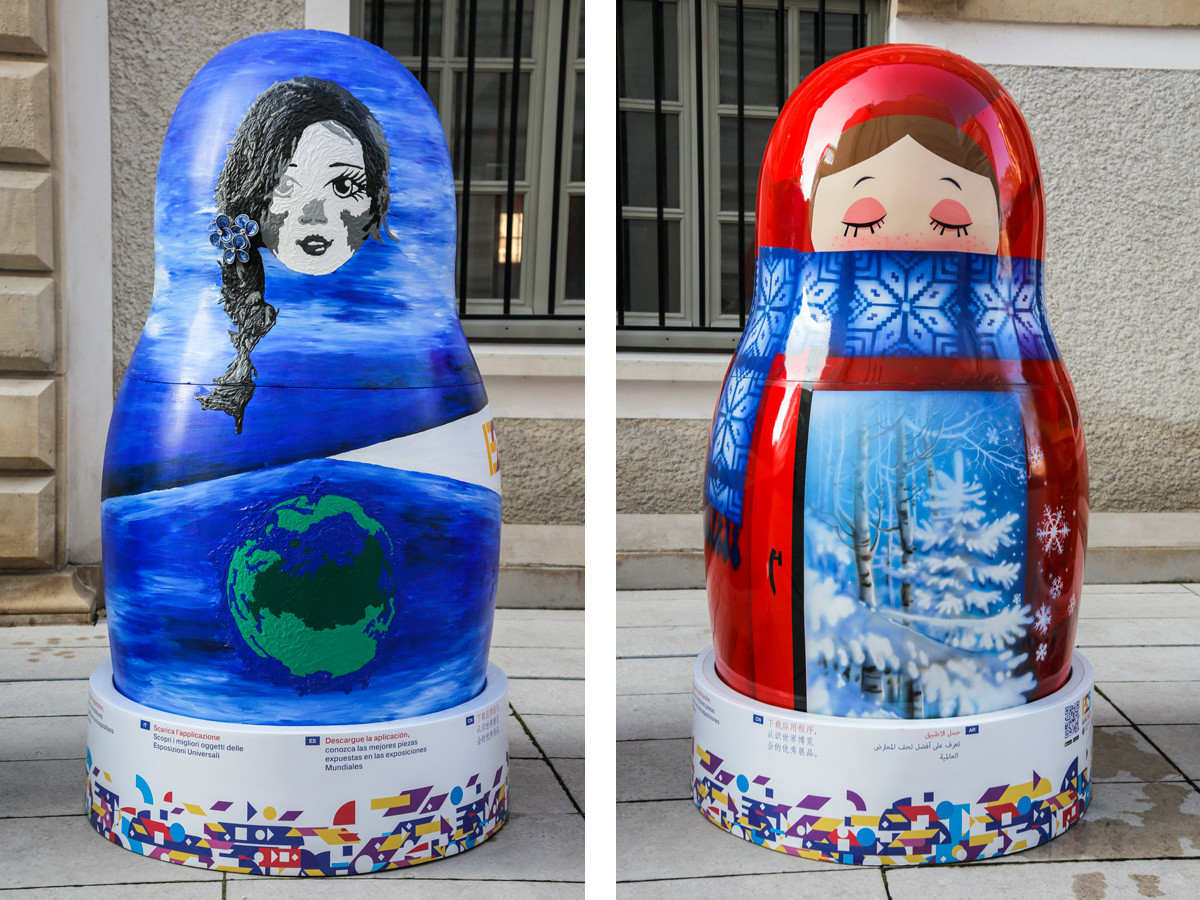 Mariska Nell created her matryoshka doll with the use of recycled materials. Artist Anna Belousova draped her matryoshka in a long scarf in reference to the traditional dress worn by women in the East. 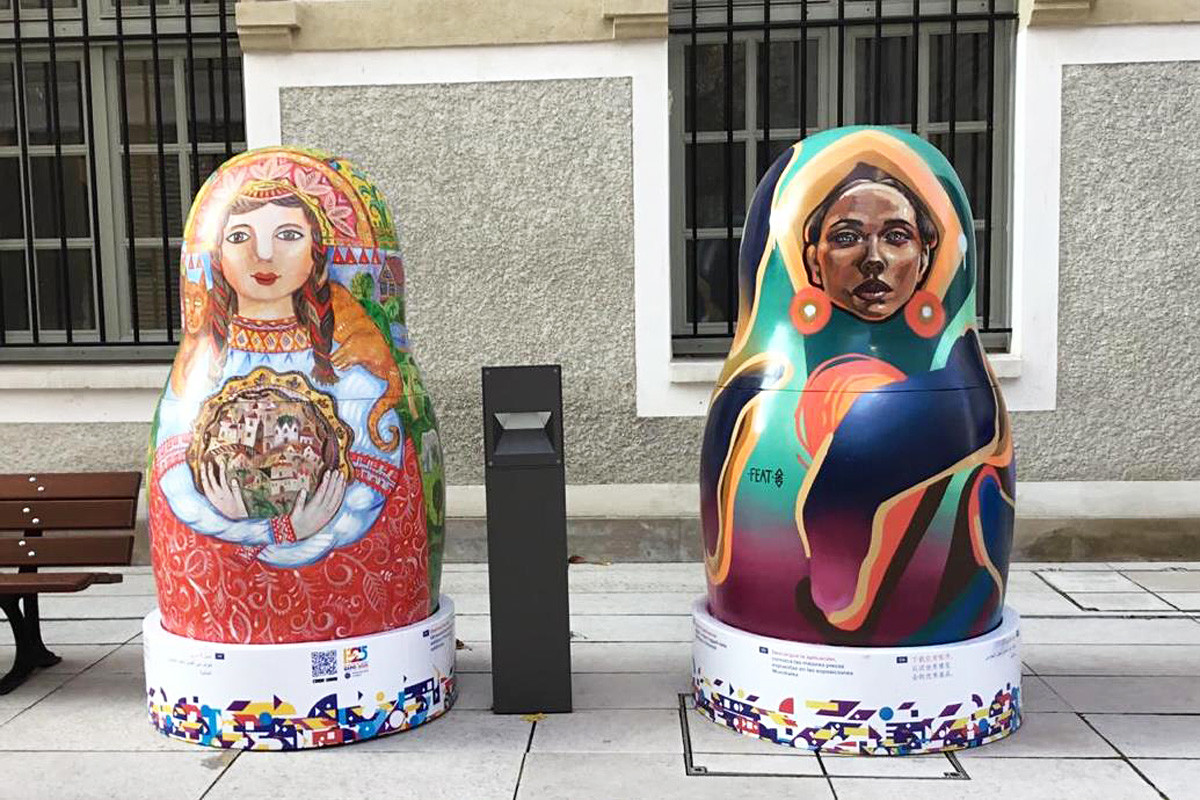 The matryoshka created by Pavel Feat looks very imaginative. Its slogan is: "Life is a dream. Realize this!" Alyona Azernaya's doll looks the most traditional of them all: it even holds a loaf of bread in its hands. 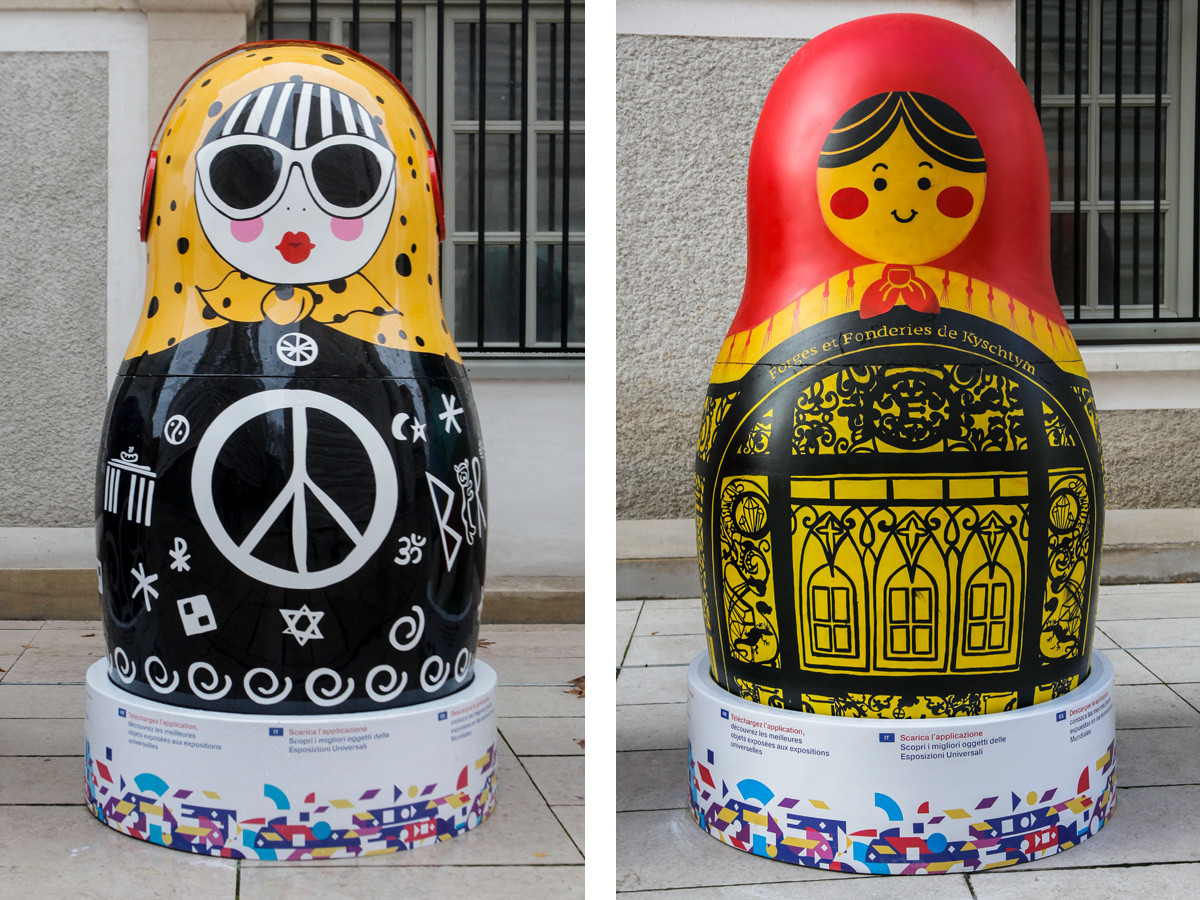 Nina Nolte's matryoshka in red headphones "world peace". Its opposite number, created by Melissa Vakhabova, sports an ornate cast-iron pavilion, which received a grand- at the 1900 Paris Exposition. 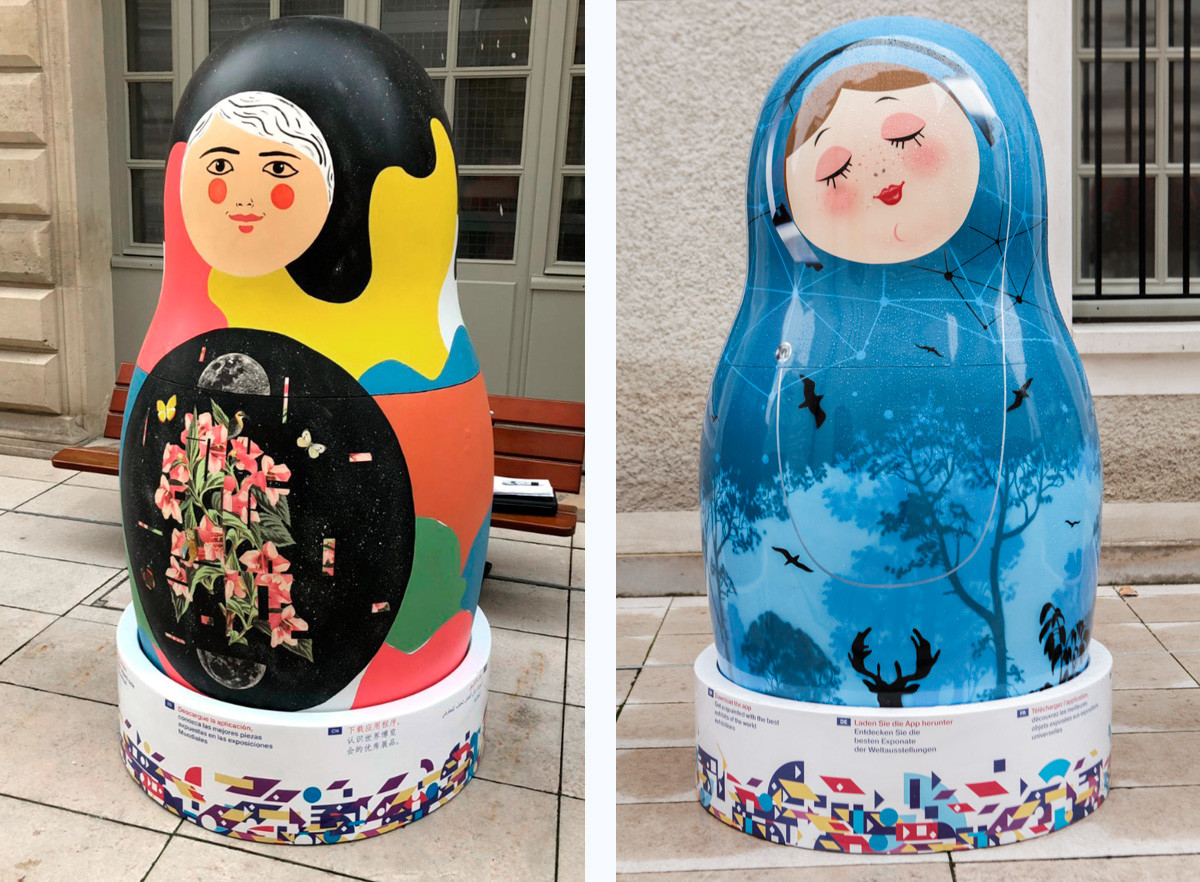 Ignacio Rivas's matryoshka has flowers blooming on its stomach, while the doll itself fertility. Anna Belousova's matryoshka is listening to music in a forest and dreaming of harmony with nature. 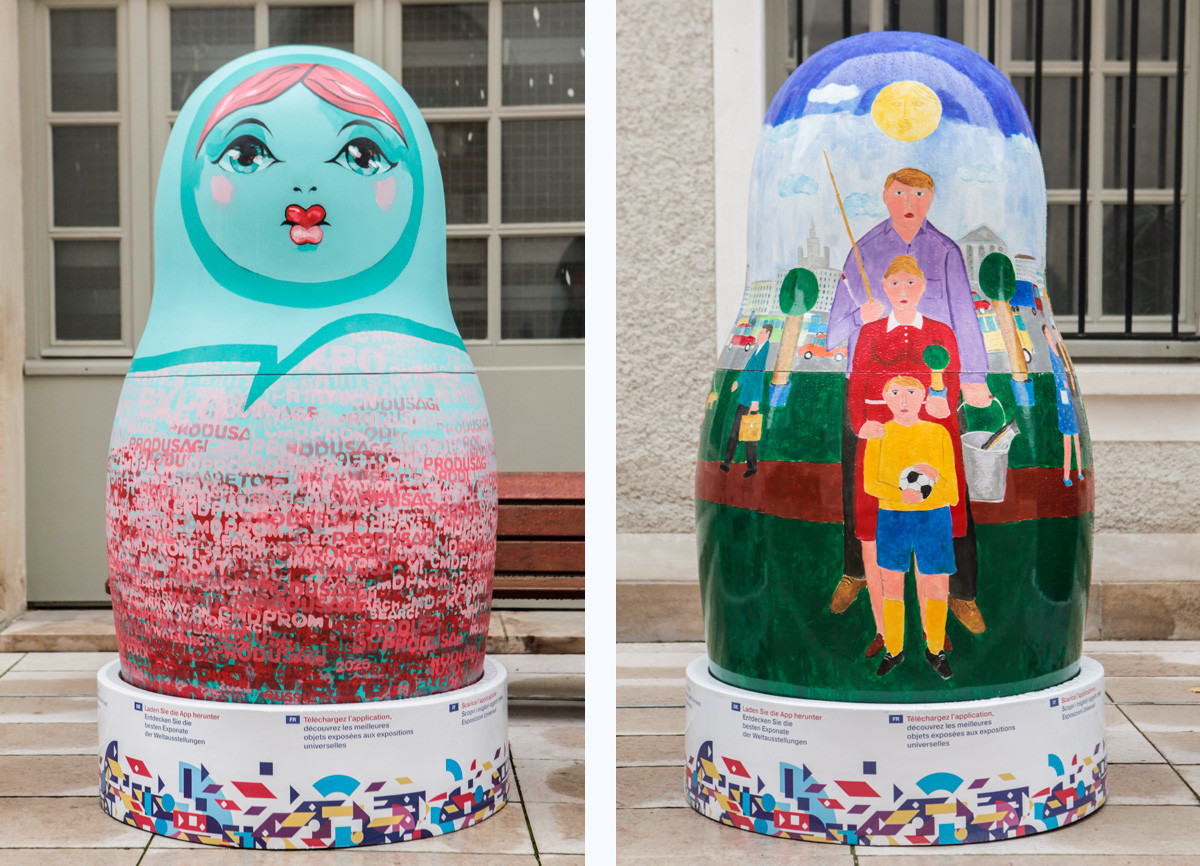 Artist Claude Chandler referenced the matryoshka's native land in his trademark stamp technique. While Andrey Karpov dressed his matryoshka in the sky and the sun, making it an object of primitive art.

In late November, all the matryoshkas gathered in Paris, outside the Russian cultural center. Unfortunately, Yekaterinburg lost its bid to host Expo 2025, which will be held in Osaka instead, and the matryoshkas went back to Russia. Now they greet visitors to the Ural cultural center in Yekaterinburg, but there are plans to exhibit them in other local art spaces too.