Is Slavic paganism a real power in Russia?

Lifestyle
Georgy Manaev
Contemporary Russian neo-paganists reconstruct their long-lost religion – but to what extent is it genuine? 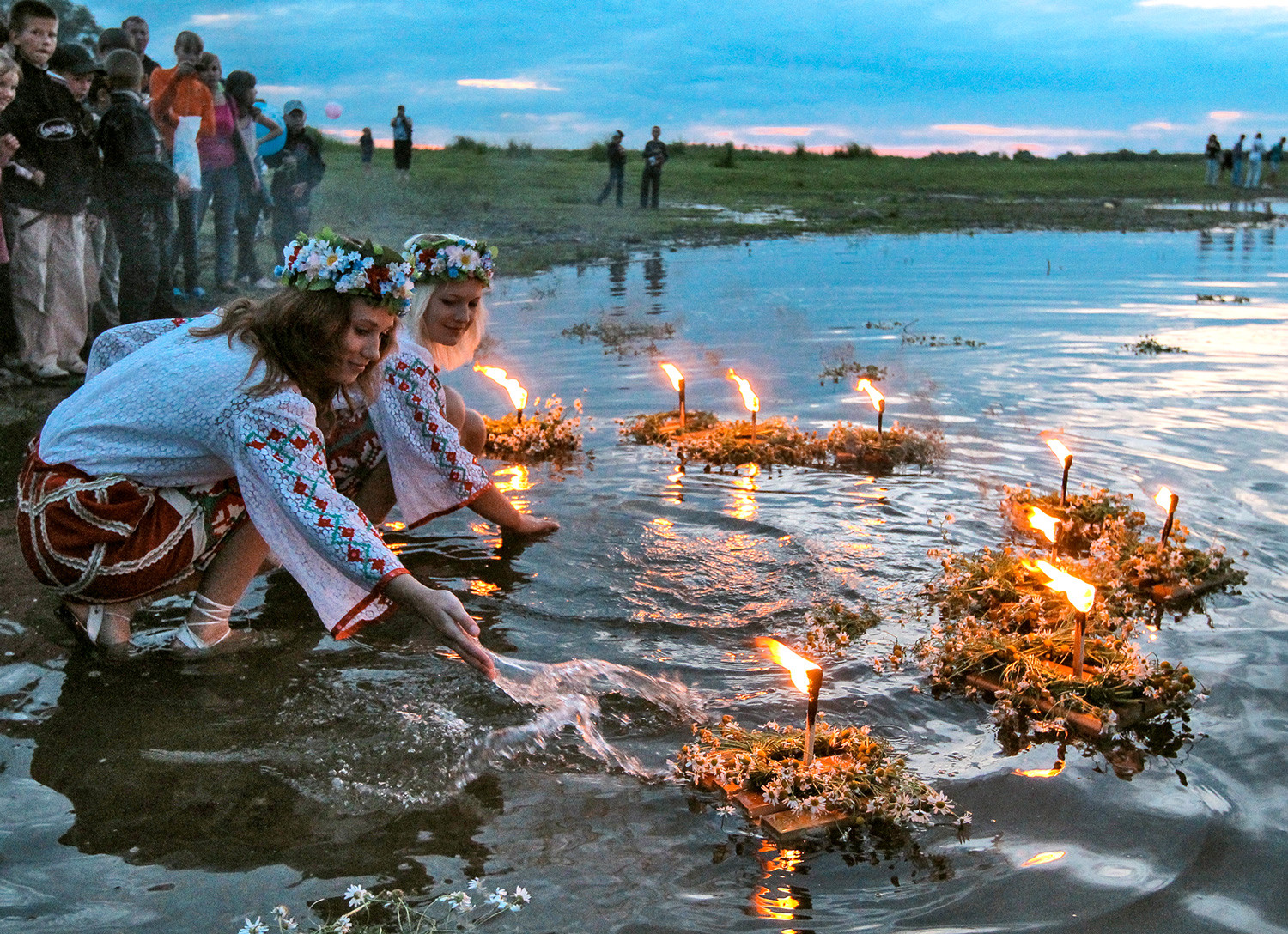 A bunch of people clad in various ethnic-style clothes are gathered around a pile of dry branches. “When we address gods, we raise our hands to heaven, but not because the gods are in heaven. They are in our hearts,” says the ‘magus’, a young man with a frail goatee and blonde hair, sporting solar symbols on his handmade shirt. “We stand on Mother Earth and address Father Heaven, and we point with our hand from our heart to the sun, showing our way…” And the magus follows this up with a ‘Roman salute’.

This is part of a neo-pagan celebration organized by contemporary Russians. “Glory to Svarozhitch, the Fire God!” exclaims another magus, and everybody repeats: “Glory!” Someone beats on a skin drum while someone else tunes a guitar. And the pile of branches is set on fire.

This is a ritual dedicated to the gods of fire (Svarozhitch) and sun (Yarilo), but the rites, the words, and the clothes are all self-invented. Contemporary Russian paganism – does it have any historical roots, or is it just a hobby?

Currently, there are 10 official pagan religious organizations in Russia. Numbers of pagan believers are high in the regions like Altay, Yakutiya and the Republic of Tuva – over 13%. But these are local shamanic cults not related to Slavic paganism.

Followers of Slavic neo-paganism call themselves rodnovery (Slavic Native Faith). Their first official religious organization was registered in 1994. Currently, one of the most influential rodnovers’ communities is called the Union of Slavic Native Belief Communities. It was established in 1997 and now comprises several local neo-pagan groups across Russia, mainly in the central region.

But aside from them, there are a great lot of sympathizers and pagan wannabees. VKontakte, Russia’s largest social network, hosts a group called ‘Slavs. Paganism. Rus’ that has over 250 thousand members. The page is largely dedicated to Slavic ancient fandom – posts on mystical beliefs, Slavic principles of life and motivating pictures. Elizaveta Orlova, the official administrator of this community, calls herself a pagan believer but says she mostly practices her faith alone: “I don’t perform rites every day because I have few fellow believers. Periodically, I perform reinforcement of power with the elements and I also use runes for various purposes,” she says.

The memory of the kin 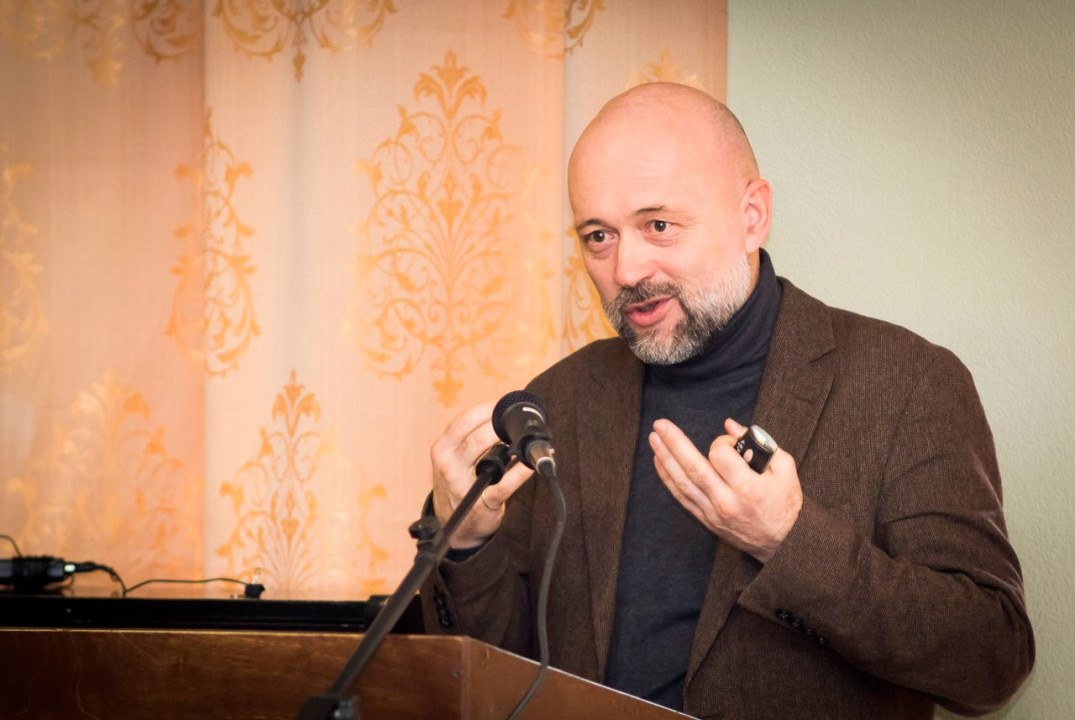 But what sources have neo-pagan people used to reconstruct the beliefs and the rites they practice? Vladimir Koval, candidate of historical science, head of the division for Middle-Age archaeology at the Archaeology Institute at the Russian Academy of Sciences, confirms that the only source telling us about pre-Christian Slavic paganism are chronicles. “Archaeological data on Slavic paganism is either nonexistent or debatable. We know about burial rites (cremations), but even here everything is questionable,” Koval, a practicing archaeologist, says. “Eastern Slavs before 988 were, unquestionably, pagans. But they didn’t leave any grandiose monuments like Stonehenge.” So what’s the problem with chronicles? The fact that they were created a few hundred years after the adoption of Christianity and written in Orthodox monasteries, so they were definitely biased.

When asked about the lack of historical sources, Elizaveta didn’t move a brow: “Indeed, there are very few sources, but people have the memory of their kin and they remember some things. Sometimes, we receive hints from the higher powers, I would not dare to call them gods, though.” 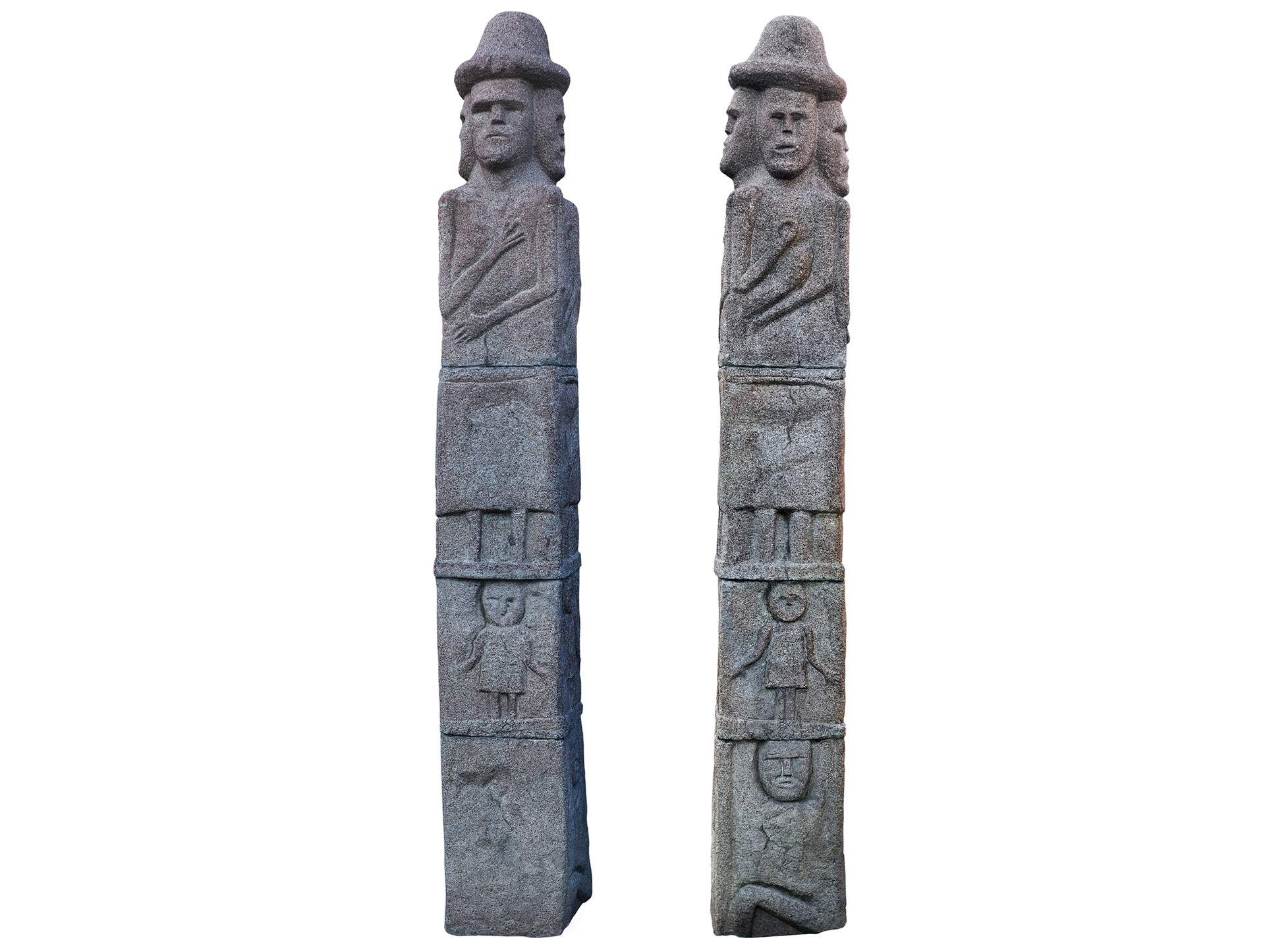 A сopy of pagan idol from Zbruch river, Ukraine

But were there actual Slavic gods? We know at least one of them, Perun, the Thunderer, but none of his sanctuaries have yet been discovered. Until recently, the ‘Zbruch’ Idol, a stone sculpture depicting four Slavic gods, was the most prominent archaeological finding related to Slavic paganism, but in 2011 Ukrainian historians Aleksey Komar and Natalia Khamaiko provided solid proof that the sculpture was a 19th-century fake. Study of the stone revealed it is much younger than the 10th century it was supposed to belong to. 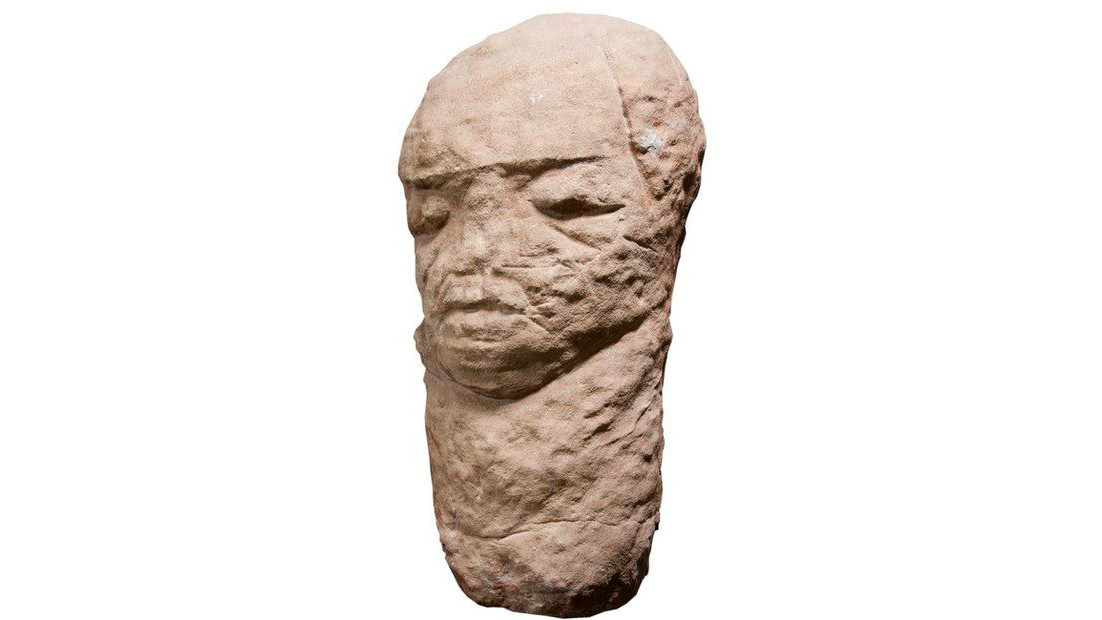 The Shklov Idol, one of the genuine Slavic pagan monuments found in Ukraine

The Russian Orthodox Church is firmly against Slavic neo-paganism. Alexy II, the former Patriarch of Moscow, condemned paganism in 2004, comparing it to terrorism. In 2014, Patriarch Kirill of Moscow warned about “dangerous attempts to reconstruct pseudo-Russian pagan beliefs.”

Common Christians, or people who call themselves so, would outright vandalize the sanctuaries neo-pagans have created. Elizaveta has mentioned some people graffiting the Blue Stone that pagan people believe to be their cult object. In 2017, wooden idols in the forest in Tsaritsyno park, Moscow, were vandalized – burned and chopped with an ax. Since then, local pagan believers have formed a group that crowdfunded the erection and protection of new idol statues. “This sanctuary doesn’t belong to any congregation!” – the official page of the sanctuary says. “This is a people’s sanctuary which anyone with good intentions can visit!” 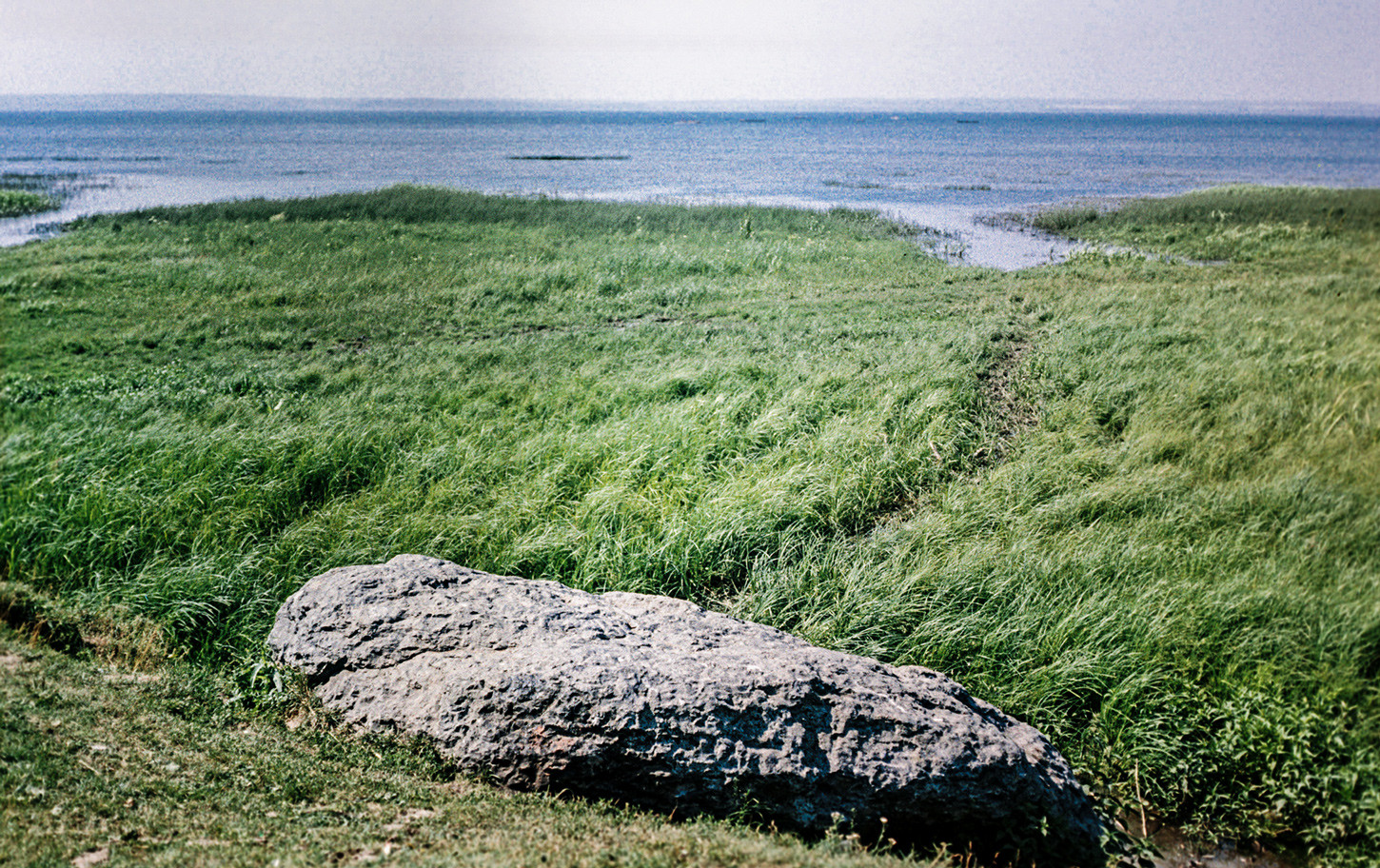 The legendary 'Blue Stone' on the Pleshcheevo lake shore.

In no way are we diminishing the importance of the beliefs the neo-pagan people employ, but we think these belief systems can be easily compared to self-invented New Age cults like Wicca or other alternative spiritual cults.

Nikita, who often visited neo-pagan celebrations, says that such sanctuaries can be used for reconstructed “sacrifices”: “There is no common list of prayers, spells or whatever – the priest delivers some speech addressing the Native places, Native Earth, and the nearby natural objects like rivers or memorial places connected to ancestors. The speech is made up by the one who speaks – and nobody objects, because the outlook on the world is the same for everybody at the celebration,” Nikita says. “The rite itself is, for example, cutting meat bought from a store with a ceremonial knife and burying it in the ground. This is a gift to the gods. Or they can kill a sheep and burn it on a ritual fire.”

Some neo-pagan organizations, however, were banned in Russia, and not for religious reasons. “These people are often fiercely anti-government. Many of them eye contemporary Russia warily, they think the Jews have taken over the country, that it’s necessary to build a Russian national state and so on,” Nikita says. The Orthodox church, in their opinion, is also alien to Russians. These people arrogantly set themselves aside from all other ‘Russians’.” When asked about right-wing people and their symbolism, Elizaveta says, “Many people alienate themselves from their families and friends, so the adoption of paganism doesn’t come unnoticed. Around 50 percent of our members are right-wing people. And there are problems with that because sometimes we are compared to the Third Reich!”

It is highly unlikely that ancient Slavic pagan beliefs were connected to the idea of racial supremacy – these beliefs were born in the territories that are now Ukraine, as the most archaeological findings related to paganism are there. But, Vladimir Koval says it is now time to reconsider what we know about the Russian past. “Today, Russian archaeology is at the uneasy stage of reevaluating its former fantastical views on paganism. Soviet archaeologists have preferred not facts, but hypotheses based on their conjectures. So reconsidering them is a necessary stage of historical research.”