Can Russia become a beer superpower?

Lifestyle
Victoria Ryabikova
Legion Media
Some brew beer at home in saucepans, others open their own breweries; still others are busy making hangover-free varieties.

In the small kitchen of a gray high-rise building on the outskirts of Moscow, a sound rings out like an object striking glass. It’s 2am. I go out of the bedroom, and my eyes are met by the following scene: my boyfriend, a tall, fair-haired, athletic guy, is pouring a muddy brown liquid from an old five-liter pan into plastic bottles. Strewn on the table are glass jars and old rags soaked with the same liquid. The smell, to put it mildly, is peculiar.

“I’m just brewing some beer,” he replies to my inquiry, as if he does it every night. 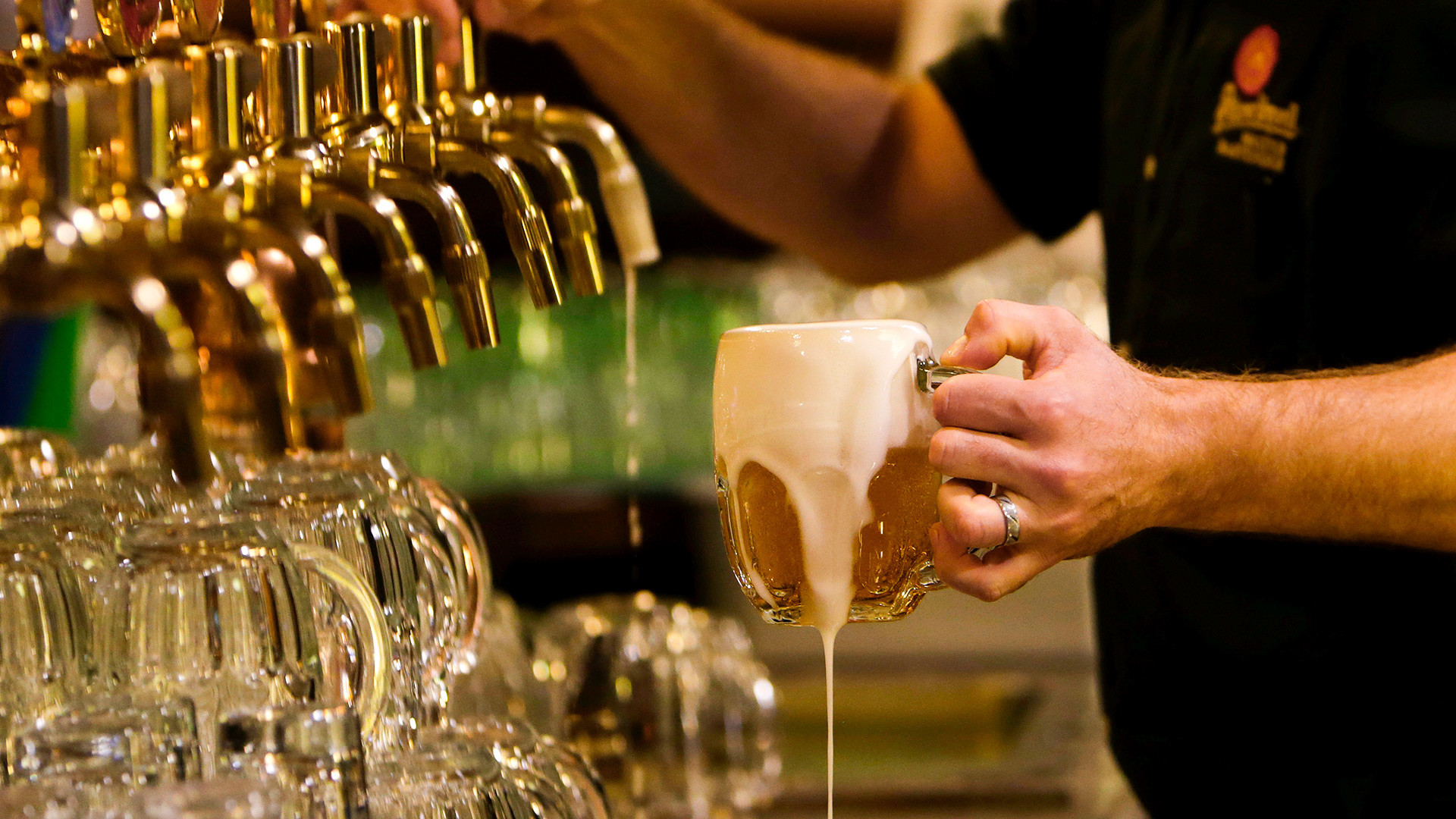 The question “Why?” provokes a even more surprised reaction:

“What do you mean why? If it’s good, I’m going to sell it at living history festivals,” he explains, trying to shove pieces of sugar into the would-be beer bottles.

Recalling that historical reenactment is in his blood (a week ago, I caught him sewing old stockings for a costume under the light of a church candle), I suggest leaving the experiments for the morning and going to sleep.

“Later. The beer will be ready in a month, I’ll make my own kiosk, you’ll see, business will boom,” he mutters and continues his work.

This story, which happened two years ago, provokes unfeigned nostalgia in the owner of the Shagov brewery and chain of beer bars, Vyacheslav Shagov, a good-natured man in his 30s.

“Once I even bought a home beer-making kit. But in fact, you can do it all in a saucepan, there’s no difference,” he says. We sit in his personal bar, which is joined to a brewery. The interior is made of pure wood, everywhere are barrels and beer taps for aesthetic purposes. Behind the glass, directly opposite the tasting room, stand huge vats, each with its own sort of beer.

Vyacheslav, who back then earned his crust in the private home-building industry, decided to open a bar after visiting European breweries housed in old buildings, offering visitor tours and tasting rooms. 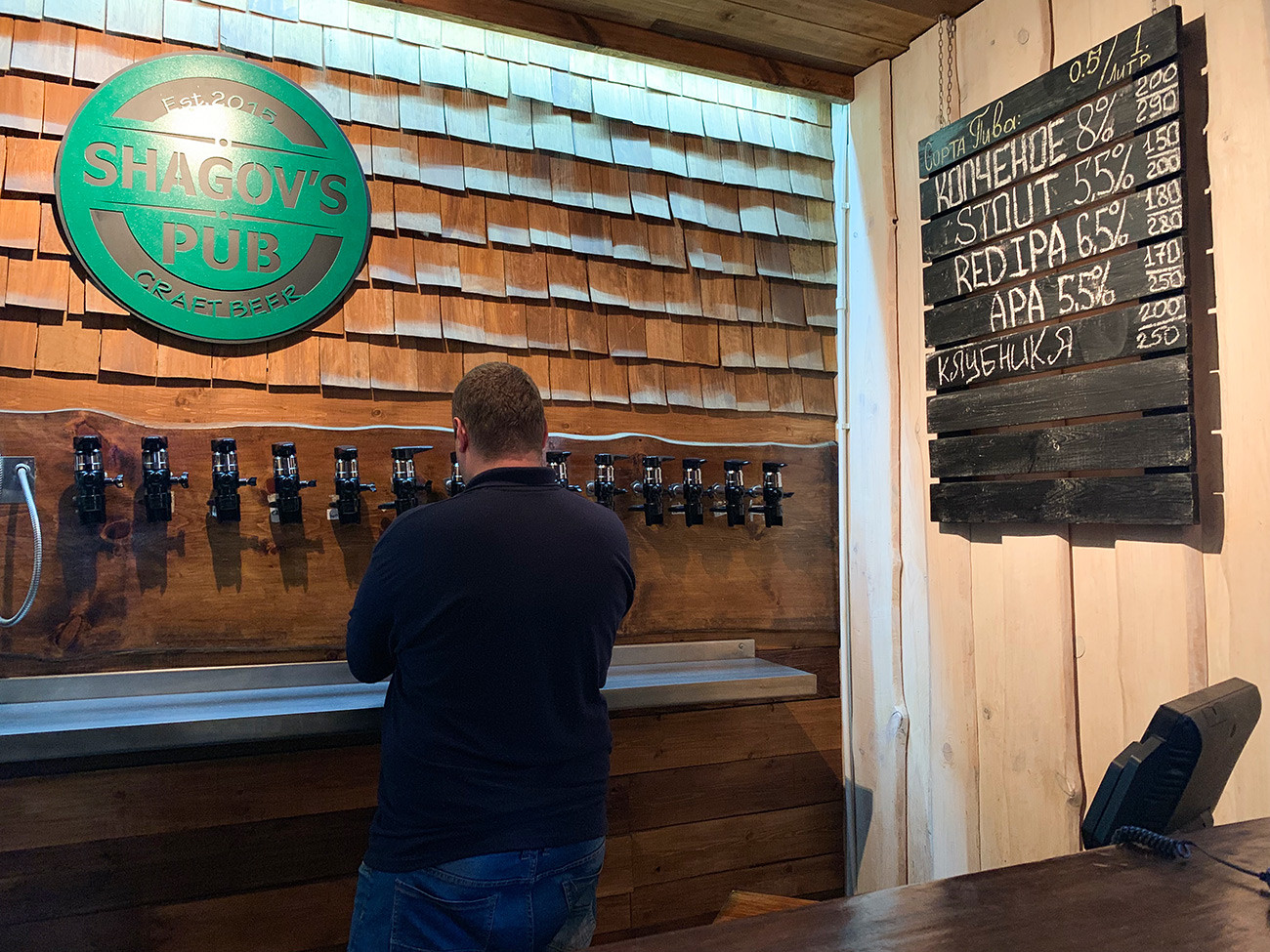 “We were used to Lager beer from the Soviet Union, but abroad they had completely different sorts. In the 2000s, some brands appeared in Russia, but most were fake. Far from being age-old recipes, it was just ordinary beer sold under the guise of something unique,” he recalls.

It took Shagov several years to get acquainted with the first home brewer festivals in Russia and brewing equipment exhibitions. At one such event, he met his business partner, who is today responsible for beer quality.

“We started out by opening a small summer bar on the lakeside. Not for money, but to find out how it all works. Then we got our first big bar in the center of Lyubertsy, 200 square meters it was. To open it, we had to take out a high-interest loan,” says Shagov. 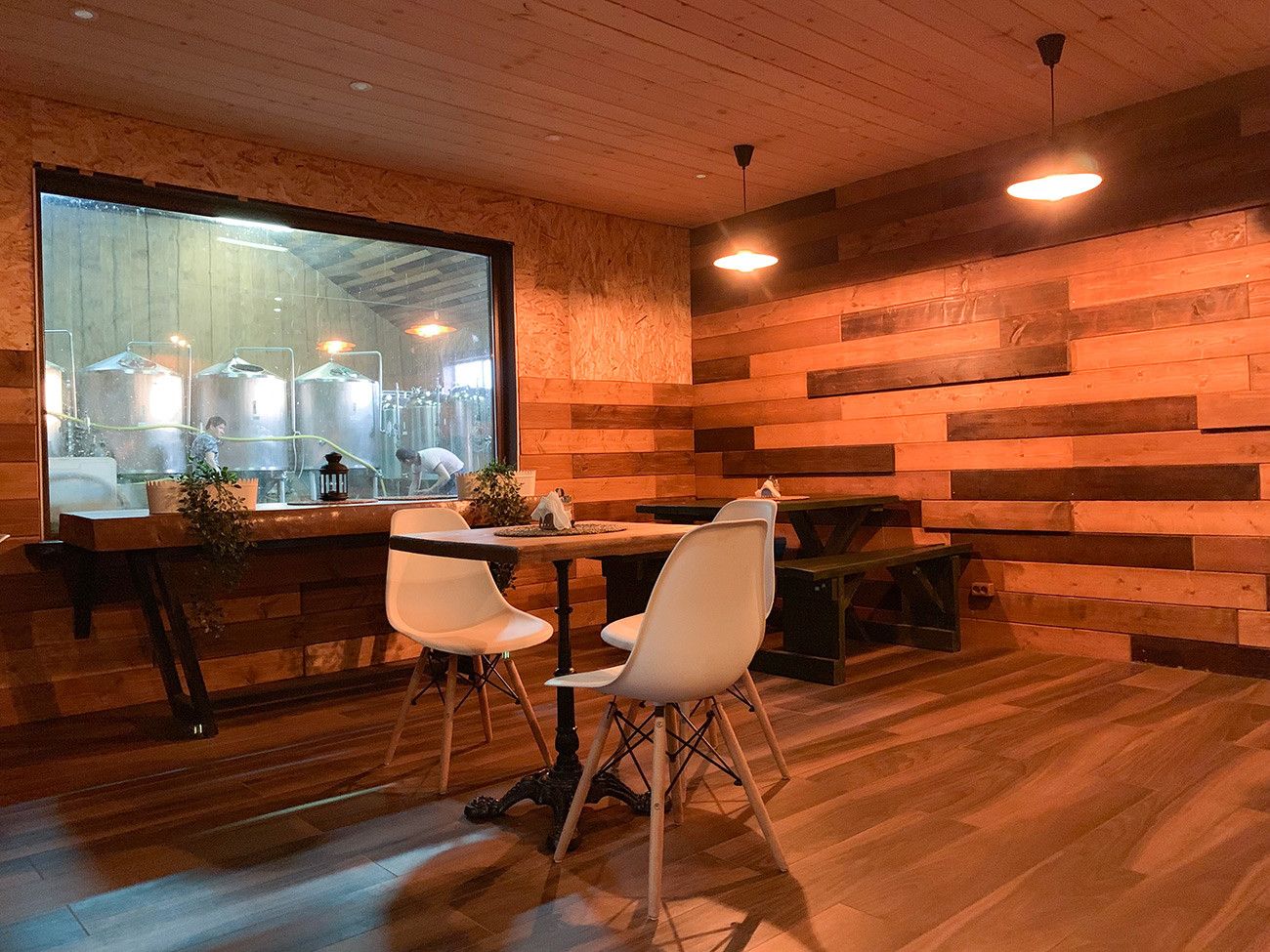 The day after the opening of the bar, Shagov was hit by the hammer of bureaucracy – the sign had not been run past the city administration, so it was quickly removed. It took eight months to get approval.

“When we opened the bar-brewery, the next day I received a document with a court decision saying the building was due to be demolished. We spent two years suing. The usual routine,” Shagov calmly outlines the problems typically faced by Russian brewers.

In his view, the development of the Russian beer industry is also hampered by ever rising excise taxes and the need for special measuring devices that require additional outlays. 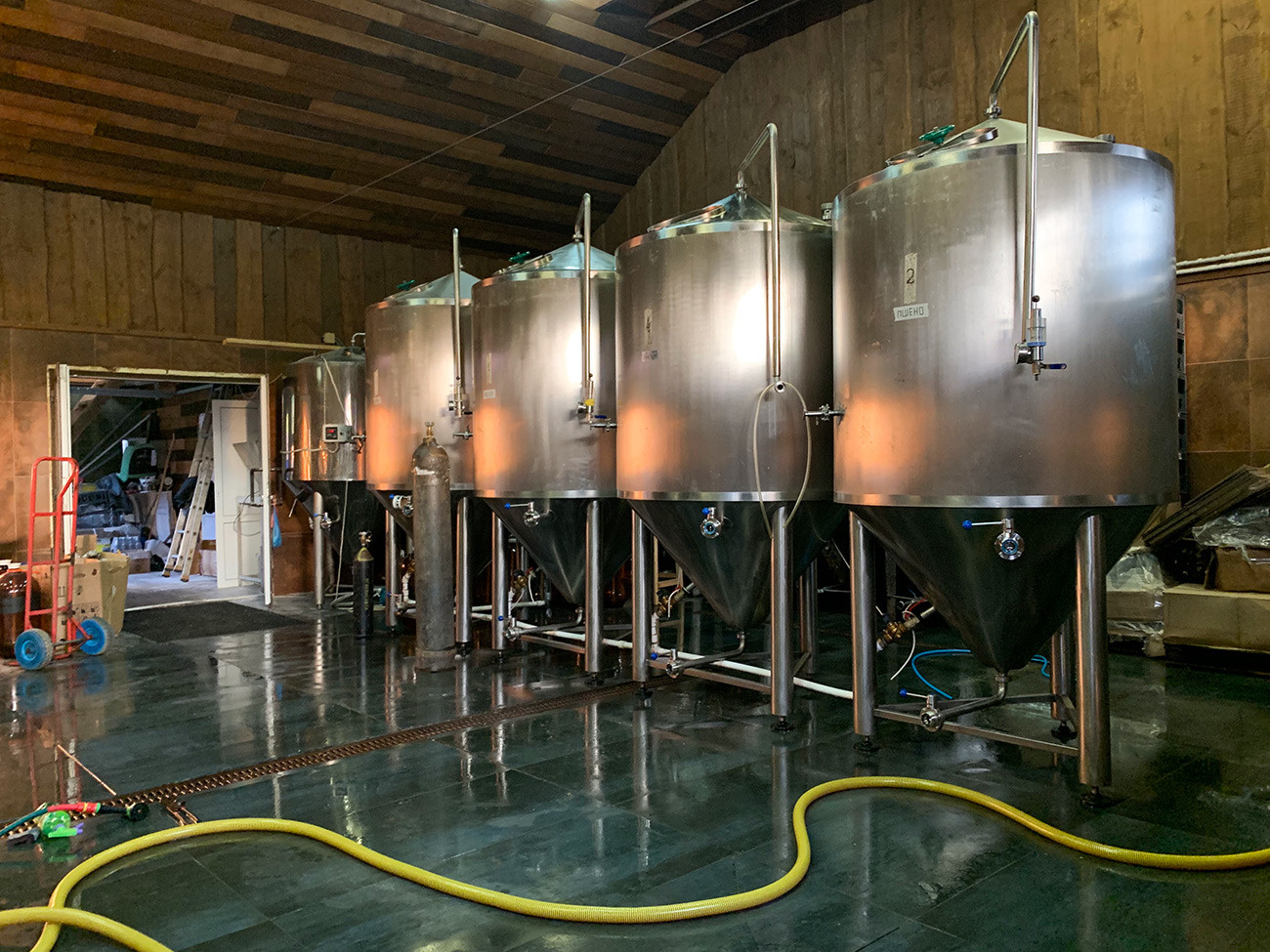 In Russia, brewing companies that produce more than 300,000 decaliters of beer a year must supply such devices at their own expense. However, the government proposed lowering the threshold first to 100,000 and then to 50,000 decaliters, which will eventually affect small breweries that cannot afford to incur such large costs.

According to Shagov, Russia already stands out in Europe for its craft bars and shops selling bottled beer. He predicts that soon most bars will combine with breweries to develop their own products. But on one condition. 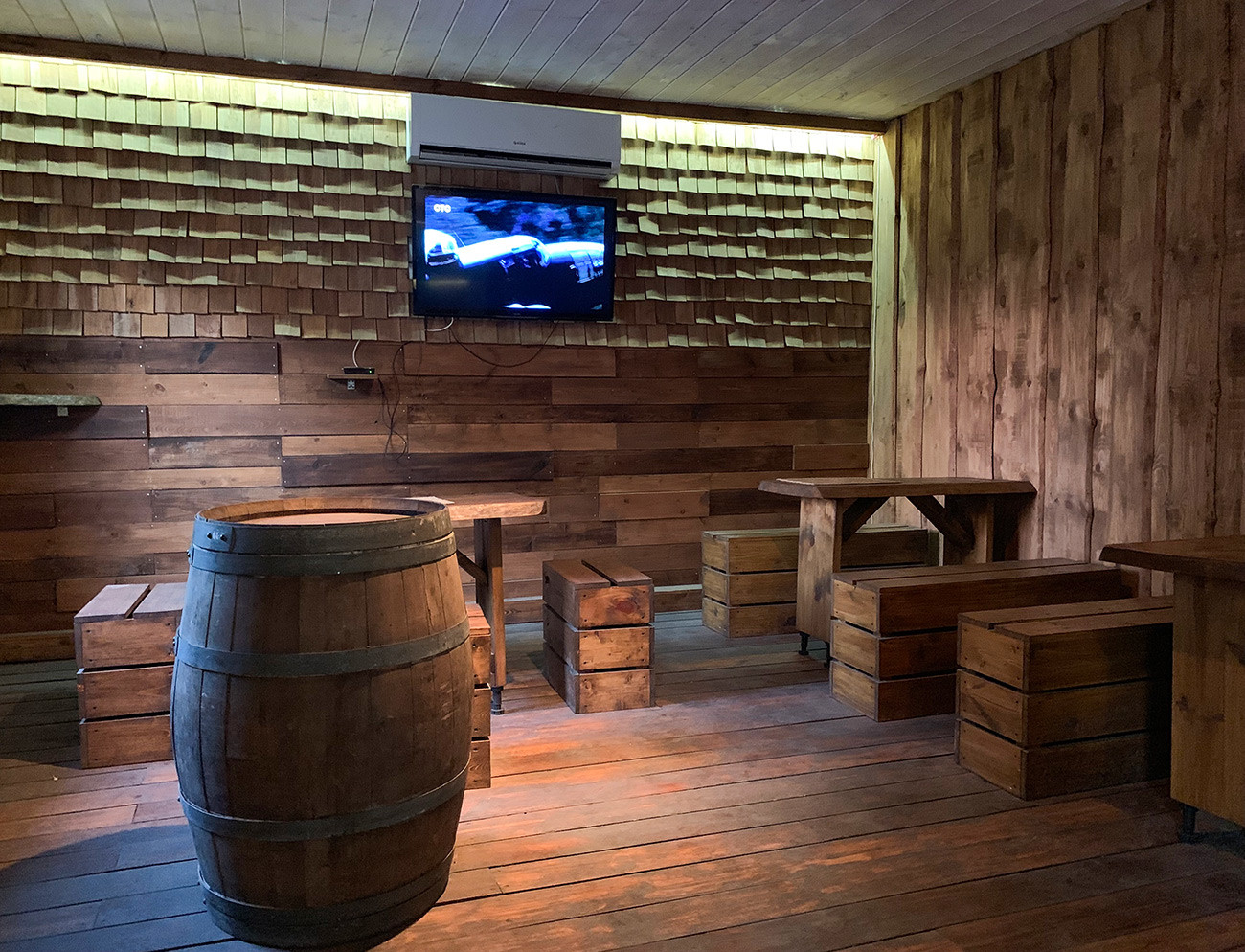 “If the state leaves people alone, then everything with beer will be ok,” says Shagov almost in a whisper, before adding: “It’s just a pity my wife doesn’t drink beer.”

“It’s impossible not to love beer, it just has an image problem,” says Vladimir Korolev, head of the training center at the Russian Sommelier League and a beer sommelier course leader in Moscow, a toned man of about 30 with a well-groomed beard as if fresh from the barber shop. “If you serve a heavier beer, like stout, with a chocolate muffin or a scoop of chocolate ice-cream, everyone will love it,” he purrs, almost licking his lips.

Every two weeks, beer sommelier courses are held for mini-groups of five students, with most coming from the Russian regions, explains Korolev. Classes last from three days to a week, and the main goal is to teach people to distinguish between different sorts of beer and to demonstrate that alcoholic beverages can be consumed not for the sake of getting drunk or slaking one’s thirst, but aesthetic pleasure. 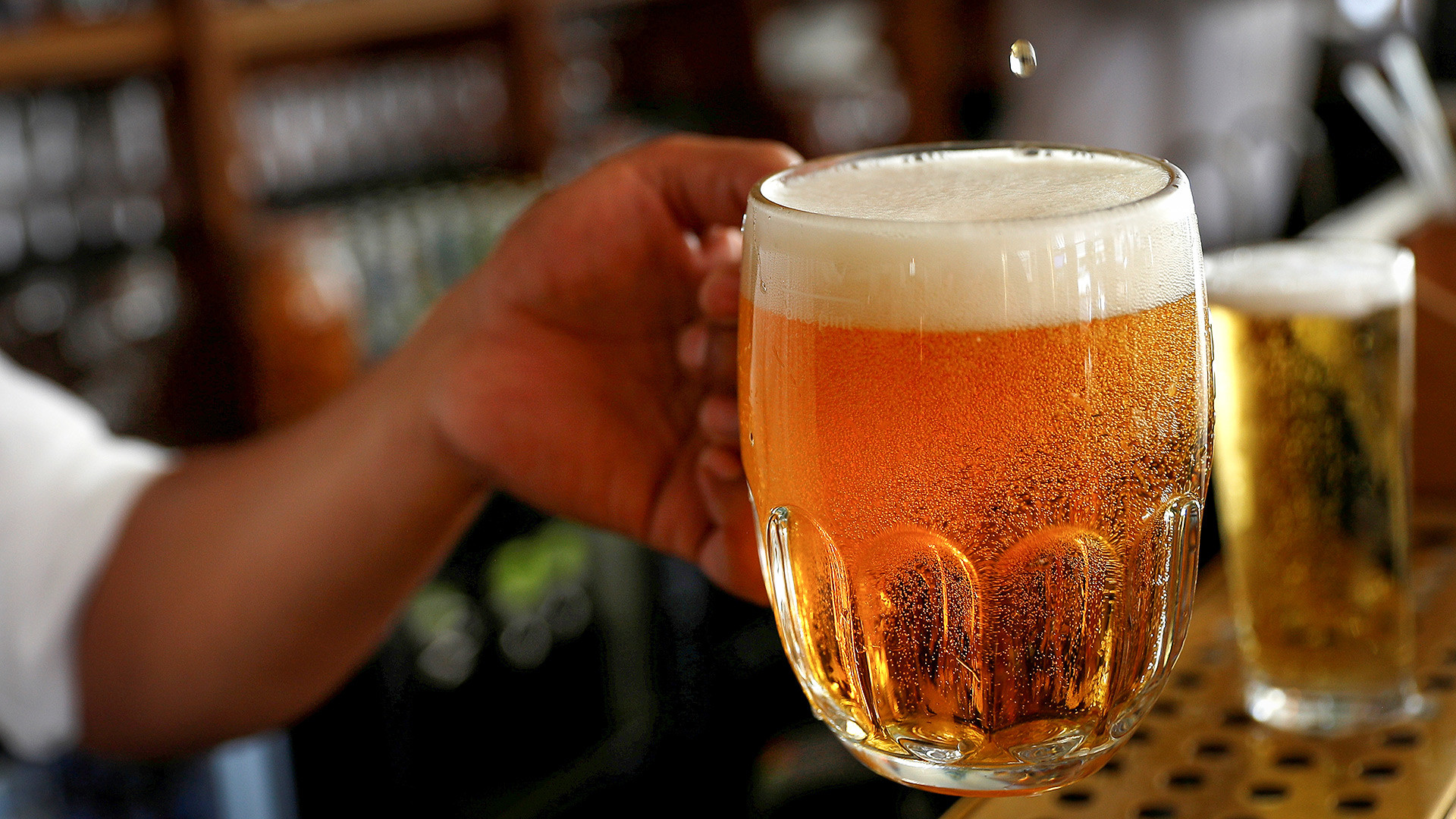 “Russian beer culture is still at the embryonic level. A few years back, people here described craft beer as rotgut for nutcases,” he says.

The craft brewing boom began in Moscow in 2013-14, and spread throughout Russia, Korolev continues. This was facilitated by recipes from European producers and the import of all necessary ingredients to Russia.

“In the space of five years, the line between European and Russian production finally began to fade,” says Korolev.

In order to make a splash on the world beer stage, Russian beers need to be produced and promoted, for example, the “sour shchi” sort, which was previously described as a special kind of kvass.

Meanwhile, chemists at the Ural Federal University are developing a variety of beer that produces no headache the morning after, it was reported by the university press service. However, it is not known when it will become available and thus earn Russia immortal status among beer drinkers.

“We have all the necessary resources and capabilities. Brewers are honing their skills; Russia has good-quality water and grows barley and hops,” says Korolev, adding that any industry, not only brewing, depends on the development of the economy.

Beer is not everyone’s cup of tea

From just late 2018 to April 2019, beer's share of the alcoholic beverage segment in Russia increased from 55.4% to 64.2%. At the same time, demand for vodka remains around 10%, reported RIA Novosti, citing a study by online product information service Rate & Goods.

However, Russians are turning to beer more to economize than anything else, asserts Roman Meister, general director of the service.

“People are spending less and less on expensive drinks like whiskey, brandy, and wine in favor of the more ‘democratic’ beer. This year, we didn’t observe any growth at all in champagne sales on May 8, although that day is the second-biggest consumer peak, after New Year,” he explains.

In November 2018, the Beru Vykhodnoy store opened 200 meters from Rizhskaya Metro Station, intended to further raise public interest in beer. The store sports a usual entrance with a red sign, but inside is a veritable exhibition of 3,000 beers covering two storeys, like a library, plus 200 draft beers on tap.

In the words of store owner Konstantin Zhelagin, some beers, like wine, should be stored for years in order to mature. For this purpose, a special aging vessel stands in the corner.

The store also has rooms where beer presentations and tastings are held.

At the store entrance, I meet a short blonde woman of around 40 years old.

“I used to get Velvet beer from a store near where I live, but the quality went seriously downhill. But here they’ve got so much you’d need several lifetimes to try it all,” she says happily and sets off around the store with a preprepared supermarket shopping bag in hand.

Against the backdrop of all I’ve seen and heard, I decide to call my ex. Maybe he’s already opened his own bar or brewery, or bar-brewery?

“Yes, but the beer smacked of acetone, everyone complained. And it’s expensive to open your own place, I only earn 50,000 rubles ($789) a month. That’s the beer boom for you!” he replies and hangs up.