Mystery of the 'bottomless' lake in Russia's Caucasus 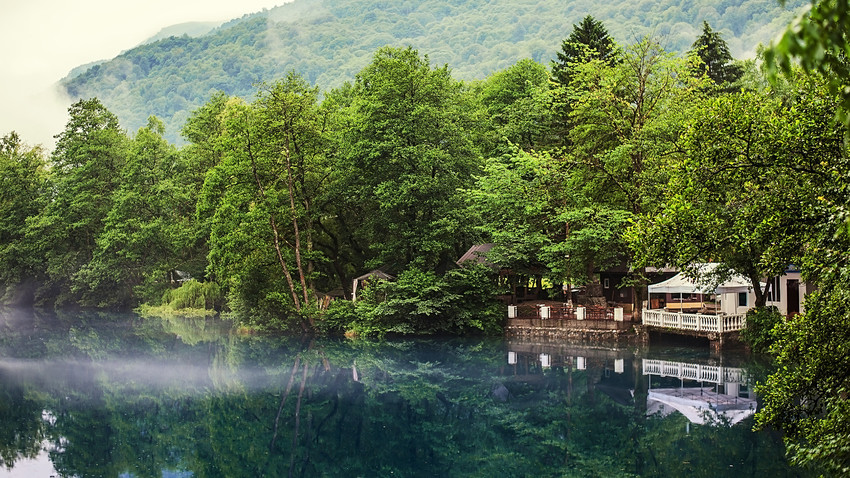 Legion Media
Not a single local ever fishes or swims here. Legend has it that a ‘dragon’ lives at the bottom.

The deep blue waters of this stunning lake, hidden in Russia’s Caucasus mountains, are surrounded by mystery. It’s uninhabited by fish and avoided by locals; only occasional tourists, scientists and divers dare to swim here.

Whatever the weather, its water temperature ALWAYS stays the same (9 degrees Celsius) and, even though its underground water source hasn’t yet been fully identified, 70 million liters of water flow out of it daily (!), giving birth to a small river.

Read on to find out what secrets it hides and whether we are anywhere near discovering them!

Found 40 km to the south of the city of Nalchik, at 809 meters above sea level, the “Nizhneye Goluboye” (Eng. ‘Lower Blue’) lake is one of the five karst lakes in Russia’s Kabardino-Balkaria Republic, which allegedly appeared as a result of the collapse of the limestone rock thousands of years ago.

This picturesque lake is almost uninhabited. In the local Balkar language, the lake is called “Tserik-Kel” which can be translated as “rotten” pointing to the unpleasant smell of hydrogen sulfide present in the water. The high concentration of hydrogen sulfide gives the water its deep aquamarine color and makes the lake uninhabitable by fish. NO ONE, apart from crayfish gammarus and algae, could adapt to living here.

Even though the lake is not that big - 235x130 meters - it’s the underwater world that makes it special. It’s not only the most beautiful, but also the deepest of Russia’s karst lakes and is among the top 10 deepest lakes in the country.

Its depth has been a mystery for centuries and is considered “bottomless” by locals. It was only in 2016, when a scientific expedition managed to go as deep as 279 meters (21 meters deeper than was previously achieved). That’s deeper than the height of the main building of the Moscow State University (182 meters) or three U.S. Statues of Liberty put on top of one another.

After 400 dives and research done with underwater equipment and remote controlled robots, the scientists claimed the lake’s underwater caves seemed to go even deeper. But visibility suddenly worsened and they had to leave further investigation for the future. The following 3D model of the lake has been made based on the findings of the expedition.

The scientists also believed that the lake to be around 10,000 years old and “fed” not only by one underground water source, but from various cracks covered by stones falling from its walls. The reason behind its constant water temperature is in its depth: the water that constantly comes from the bottom simply doesn’t have enough time to warm up during hot summers or cool down further in cold winters.

The problem with exploring such deep waters, especially at 809 meters above sea level, is that it’s extremely difficult for divers and very expensive, says Sergei Gorpinyuk, a technical diving instructor. “In terms of difficulty, it might be compared to flying to the Moon! When a person is in space, the difference between the internal and external pressure is only 1 atmosphere [ATM]. When diving to 200 meters, such a difference reaches 20 ATM,” he explained. (link in Russian)

Scientists and divers have also attempted to explore the lake’s depth before 2016. In 2012, British diver Martin Robson set off on an expedition together with his team, but it ended in tragedy. Russian diver Andrei Rodionov died during the dives and Robson himself had to go through intensive care after making a record 209-meter dive. He surfaced too quickly which led to a decompression sickness - he fought for his life for 11 days in one of the hospitals in Sochi.

The “bottomless” lake is clouded by many myths - from the stories about the army of Alexander the Great that allegedly drowned in it to a truck full of port wine that fell into the water in the 1930s. Coincidentally, the 2016 expedition did find (link in Russian) a truck, however without any port wine.

The most popular ancient legend, however, tells of a dragon that was defeated here by a local hero. Hit by an arrow, the beast fell onto the mountain range and its tears of pain flooded the place around it, creating the lake. Some jokingly suggest that it might be the dragon still living at the bottom that prevented the scientists from discovering all its secrets in 2016. Who knows, maybe it’ll emerge to be the deepest - and most precious - lake of them all?