What the last Chuvash pagans ask their Gods for

Sergey Poteryaev
In the heart of the Republic of Tatarstan, a predominantly Muslim region on the Volga River, there is a small Chuvash village populated by pagans, who have miraculously escaped conversion, either to Christianity or Islam. Its residents practice ancient rituals, including animal sacrifices. We managed to witness one of them.

We arrive at Staroye Surkino at ten to six in the morning to see the annual rite of worship called “Uchuk”. Local residents and visitors are gathering in a field outside the village to ask their supreme god Tura for prosperity and offer him a sacrificial animal as a gift. I know that the prayer will end with a meal made out of the sacrificial bull, and the thought makes the hair stand up on the back of my neck. When you buy a steak in a supermarket, that seems to be alright, however, when you look at this bull in the eye, you suddenly feel very sorry for it. Anyway, for the time being, the bull is still standing in one of the courtyards and I, fortunately, cannot see it.

The first to appear is Uncle Petya, a heavily built man in his 50s, dressed in overalls. He is one of those who will be slaughtering the bull. He tells us it’s not his first time, so he is very calm. He is followed by several more men and women, who have changed into traditional Chuvash costumes. The bull is brought out and tied to the fence, so that it can graze for one last time. In the meantime, Uncle Petya is sharpening his knives. 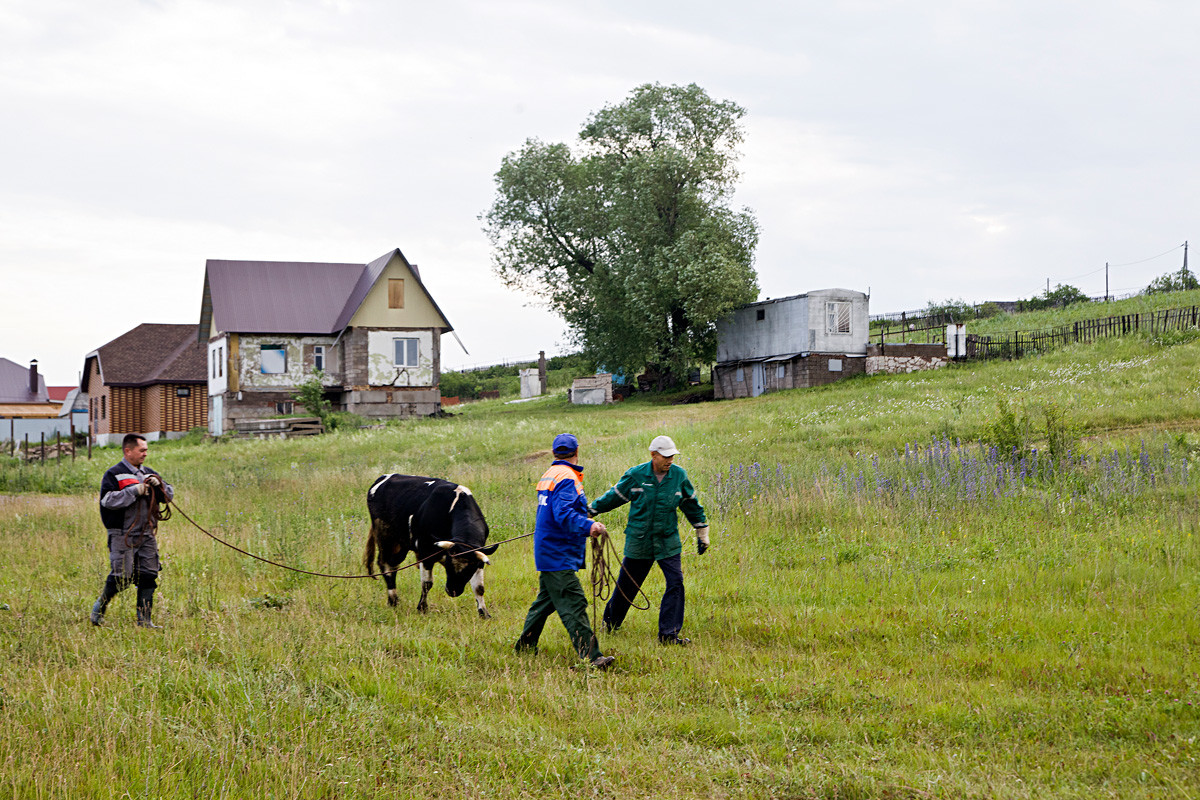 The women pour beetroot kvass into a jar, take a sacrificial flatbread - a “yusman” - and go to a hillside by the river, where the Uchuk will take place. Just before the bull is sacrificed and decapitated, the women read a prayer and sprinkle the animal with clean water.

Apart from us, there are no more than a dozen people in the field. “Tell me when it's over,” a genteel elderly woman in glasses asks me, turning away. Zinaida Voronova works at the University of Culture in Cheboksary, the capital of Chuvashia. She and her colleagues have come here to learn the local customs. She is not too keen to watch the proceedings, saying she is not used to things like that. Zinaida comes from a family of baptized Chuvash, like everyone else in Cheboksary, but she says she has never made a distinction between those who are baptized and those who are not. “We all knew about these rituals from childhood, but we never attached much importance to them,” she says. There are small pagan communities still remaining in several villages in Tatarstan, but the majority of pagans live here, in Staroye Surkino.

'None of our family have been baptized'

The Chuvash moved here in the 17th century from near Kazan, fleeing from both Christianity and Islam. The Chuvash and Tatars are Turkic peoples, but the Tatars converted to Islam in the 10th century, while the majority of the Chuvash were converted to the Russian Orthodox faith. However, some of the most steadfast of them managed to hide in remote little villages and preserve their paganism. Their supreme deity is a kind god called Tura (which in Chuvash means god or sky). His opposite is “Shuittan” (“the devil”). They believe that all that is alive has a spirit in nature, and that there is a deity supervising any type of human activity. Generally speaking, this belief system was quite common among different Turkic peoples, except that they called their supreme god differently: Tengri, Teyri or Tor. 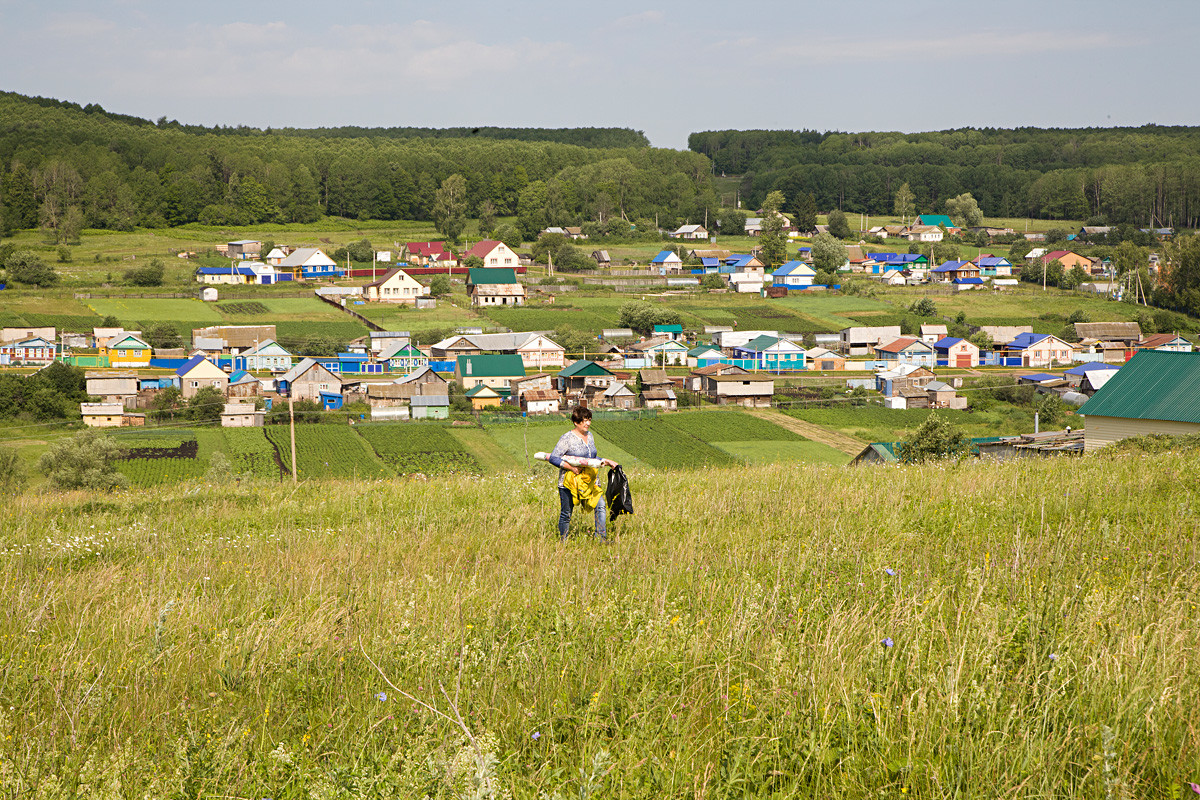 The village of Staroye Surkino was named after its first settler, Serke. It lies hidden in a lowland, surrounded by dense forests and, even in this day and age, is not so easy to reach: the nearest town of Almetyevsk is about 20 km away. Staroye Surkino has a population of about 1,500 people. They live in solid houses, many of which are new. They have a kindergarten and a school. Locals speak both Chuvash and Russian. As long as they are not engaged in their rituals, they are no different from any other people: they surf the Internet, watch TV shows, drive cars, work in offices.

There are three cemeteries behind the village: for Christians, for Muslims and - the largest and oldest one – for pagans. In it, instead of gravestones, there are pillars - called “yulas” – made from oak for men and from linden for women. The wooden pillars are later replaced with stone ones (that ritual is held once a year, in November). There are no churches in the village, and have never been. There are no priests either, as everything is decided by an elders' council. “We pray where we stand,” says Galina Timerbaevna Bikbova, one of the village elders, who approaches us after the prayer. She hands out kvass and yusman, "so that the God accepts our sacrifice. Our god is the pre-Christian and pre-Muslim god, Tura."

While the men are carving up the bull, the women make a dozen bonfires to cook a sacrificial porridge called "uchuk pata". It is made from three cereals: buckwheat, rice and millet, which is why some people call it “porridge of friendship”. The last ingredient to go into the cauldrons is bull meat. The bull's head and hooves are hung on an old oak tree, while those of last year's bull are taken down and buried in the same field along with the hide and tail. 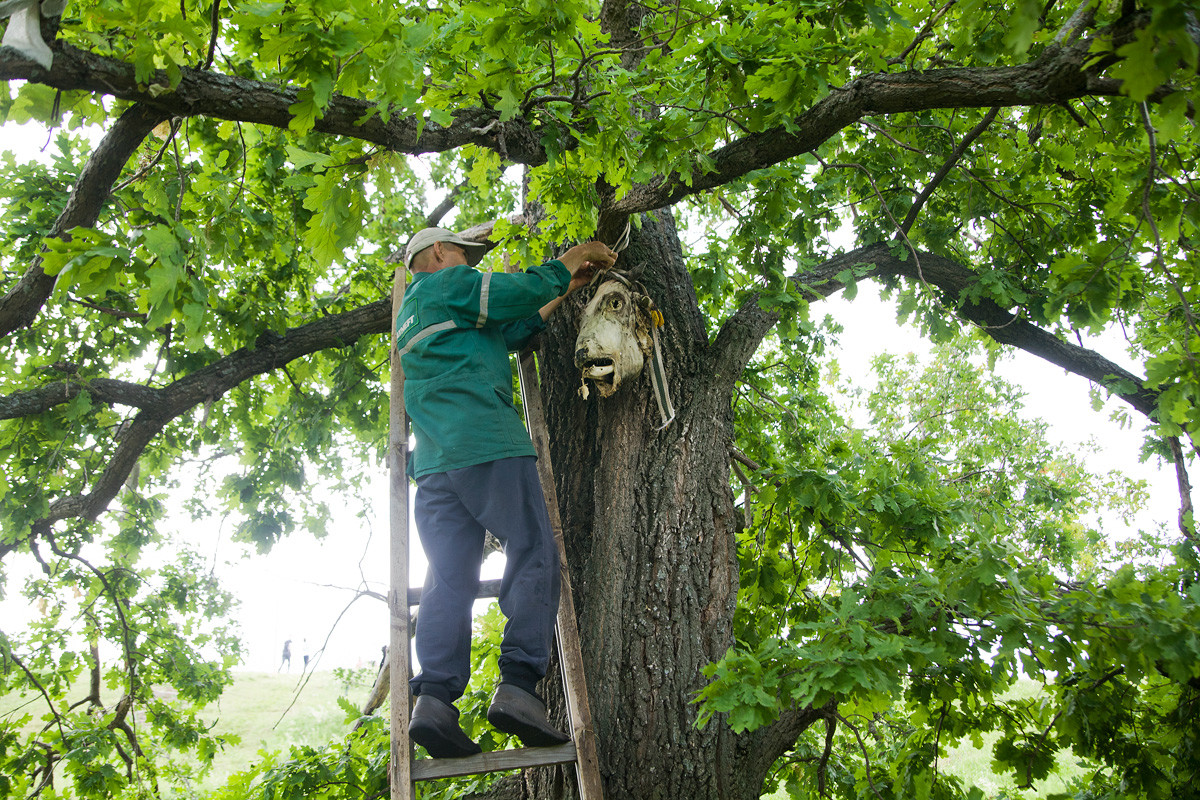 Villagers believe that the ritual of prayer in the field will help protect them from evil elements and evil people. “Recently there was a hurricane. In Almetyevsk, in Zelenogorsk, everywhere roofs were blown away. Whereas, here the wind blew for five minutes and that was it. And we say: thank you, God, for protecting us,” says Galina Timerbaevna. She spent 45 years teaching Russian at school, and is now retired, and looking after her grandchildren. She has nine of them, and they are all brought up in the Chuvash faith. “None of our family have been baptized, touch wood. Had I been meant to be baptized, then God would have sent me to a baptized family. Why go against one's faith?" This is the fifth year when she takes part in the ritual, and previously, she would deal with organizational matters.

The southeast of Tatarstan was indeed hit by a hurricane four days earlier. Even the previous night in Almetyevsk there was heavy rain with thunder and lightning. According to the weather forecast, there was supposed to be a drizzle in Surkino all throughout the day, and we have even asked the locals to lend us rubber boots. But we needn't have worried: immediately after the prayer, the clouds miraculously cleared, the sun came out and the grass in the field became dry.

“When I was young, I was a Komsomol activist and I rejected these rituals,” says Galina Timerbaevna. “Although somewhere deep down the faith was probably there all the time.” She recalls that, even in Soviet times, all these rituals were held in Staroye Surkino: weddings, funerals, fairs, and prayers in the field. The local authorities did not interfere, because they themselves adhered to these traditions. In recent years, the ceremony of the prayer in the field has been held as part of a festival of the Chuvash people from beyond the River Kama. It is organized by a former head of Surkino, Inna Almukova, along with activists. She is slightly upset that she did not have time to change into a folk costume: they were at a Chuvash youth forum till late last night, then overslept, so they had to attend the ritual in their regular clothes.

Usually Chuvash women decorate their clothes with coins, a symbol of wealth. Galina Timerbaevna is wearing beads made of Soviet kopeks.

'This is not a religion but a world older'

The men who were carving up the bull change into business suits and prepare to welcome guests, a delegation from the district administration. By ten in the morning, there are already several hundred people gathered in the field. Folk music groups will be performing old traditional songs, tents will be set up to present traditional crafts, and all guests will be treated to the porridge. 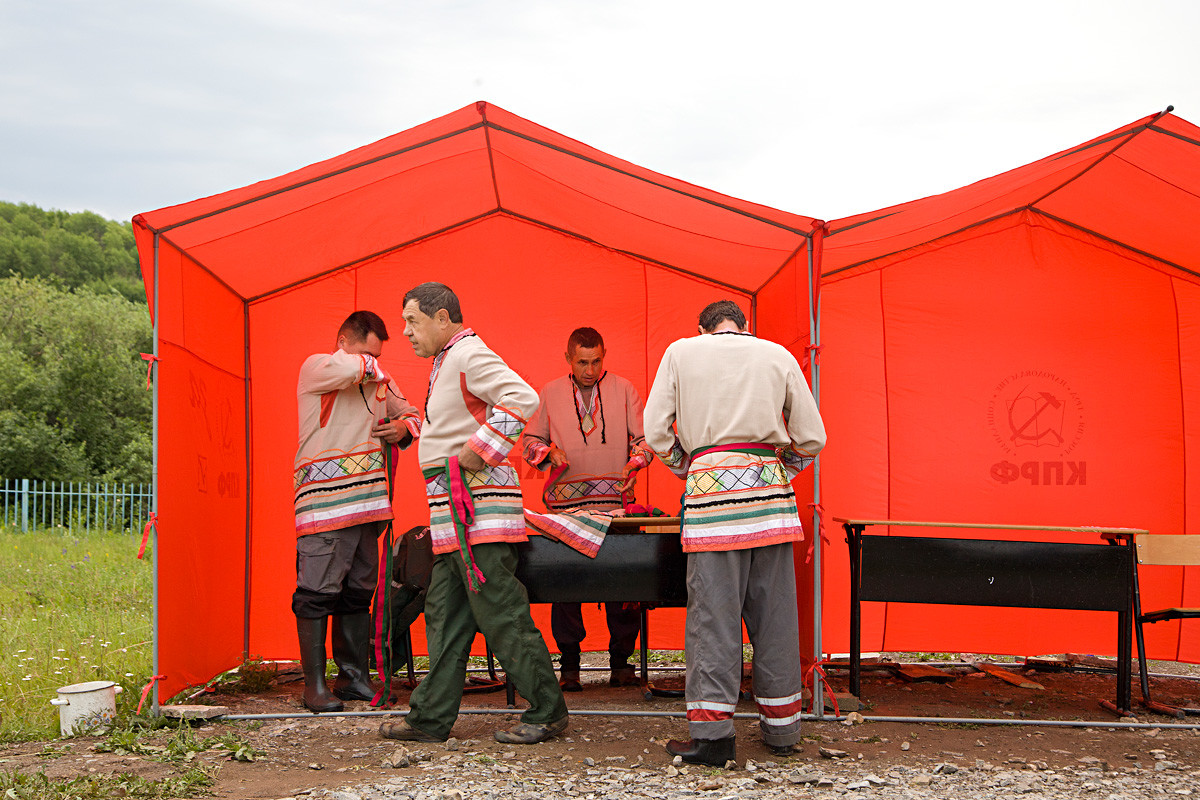 A sporty man wearing a shirt with folk embroidery introduces himself as Nikolai. This is the name written in his passport, although everyone calls him Migous: it is customary for many Chuvash to have two names. He is a sculptor from Cheboksary, aged 54, and he has come here to get acquainted with the traditions of his people. He was baptized as a child, but later in life he came to the traditional Chuvash faith. “Back at university, we studied different religions, and already then I realized that it was not my cup of tea. My baptism was a formality; let's say, my parents did not really think about what they were doing. My two grown-up sons, too, have now decided to study our traditions. After all, what we believe in is not a religion, but a certain world order.” He says that deep down, even baptized Chuvash people believe only in Tura.

At the same time, Galina Timerbaevna points out that there are fewer and fewer pagan Chuvash people left. "It is fashionable among young people to be baptized, so it may well be that we'll turn out to be the last pagans." Just 10 years ago, only 5 percent of the village population were baptized, whereas now the figure is 20 percent. 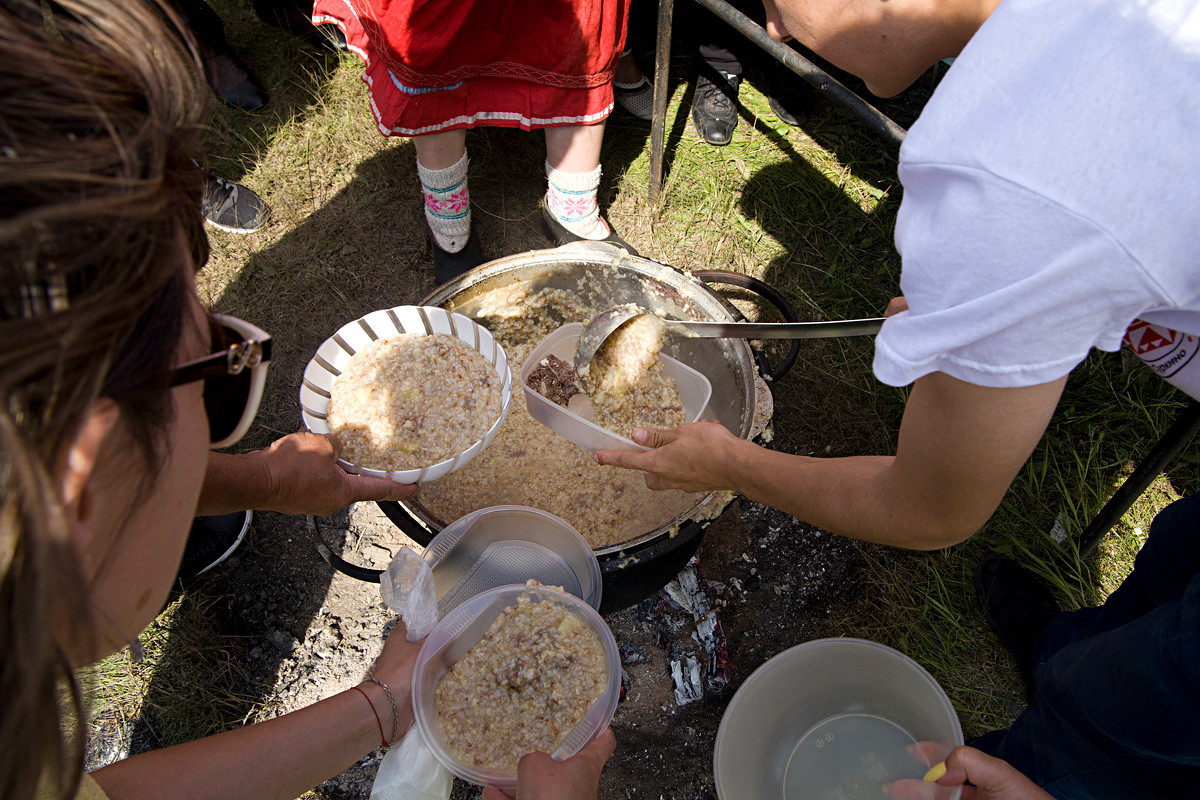 That said, the money to buy the bull was collected by the whole village, with some residents donating 100 rubles, some 200. Today's bull cost 54,000 rubles, plus the cereals, says the head of Staroye Surkino, Nikolai Valerievich Leontyev. “I had lived all my life here unbaptized, and my wife was unbaptized, and her parents too, – he says. – However, in 2006, when our youngest daughter was born, we decided to get baptized all together. I was 35 at the time. We chose the Russian Orthodox Church, it just seemed more natural. We have always believed in God, although there are no churches here. Everyone makes their own choice.” He says that the main thing is that the residents of his village have jobs, good roads and electricity. Nikolai Valerievich even chipped in for the bull, too.