Lifestyle
Oleg Yegorov
ZUMA Press/Global Look Press, James Mangold/20th Century Fox, 2013
It looks like Russia’s reigning UFC champion is going to fight American Tony Ferguson, but who’ll be next? We’ve put together a list of opponents that realistically could have a chance!

In September 2019, Russian MMA fighter Khabib Nurmagomedov successfully secured his UFC champion status, when he beat Dustin Poirier. That was Khabib’s 28th straight victory against zero defeats. So it’s no wonder Khabib has also become the most popular person on Russian Instagram, beating (but not literally) the country’s top celebrities, pop stars, and singers.

Khabib only needs two more victories to reach an unprecedented 30-0 score – a score he’s signaled he’s ready to retire with. Allegedly, he considers American fighter Tony Fergusson his next rival, saying Tony “deserves it” while also suggesting he may also face Georges St-Pierre in the octagon. It seems Khabib doesn’t have many options, being so strong a fighter in his category.

But why not go further and widen the potential candidates? Well, we did – and went far and beyond not only Khabib’s weight category, but UFC and MMA rules, common sense and reality, and figured out five potential fighters that could be a match for Khabib (in our imagination). The only criteria: they are physically strong male pop-culture icons, who fight a lot. Just like Khabib. 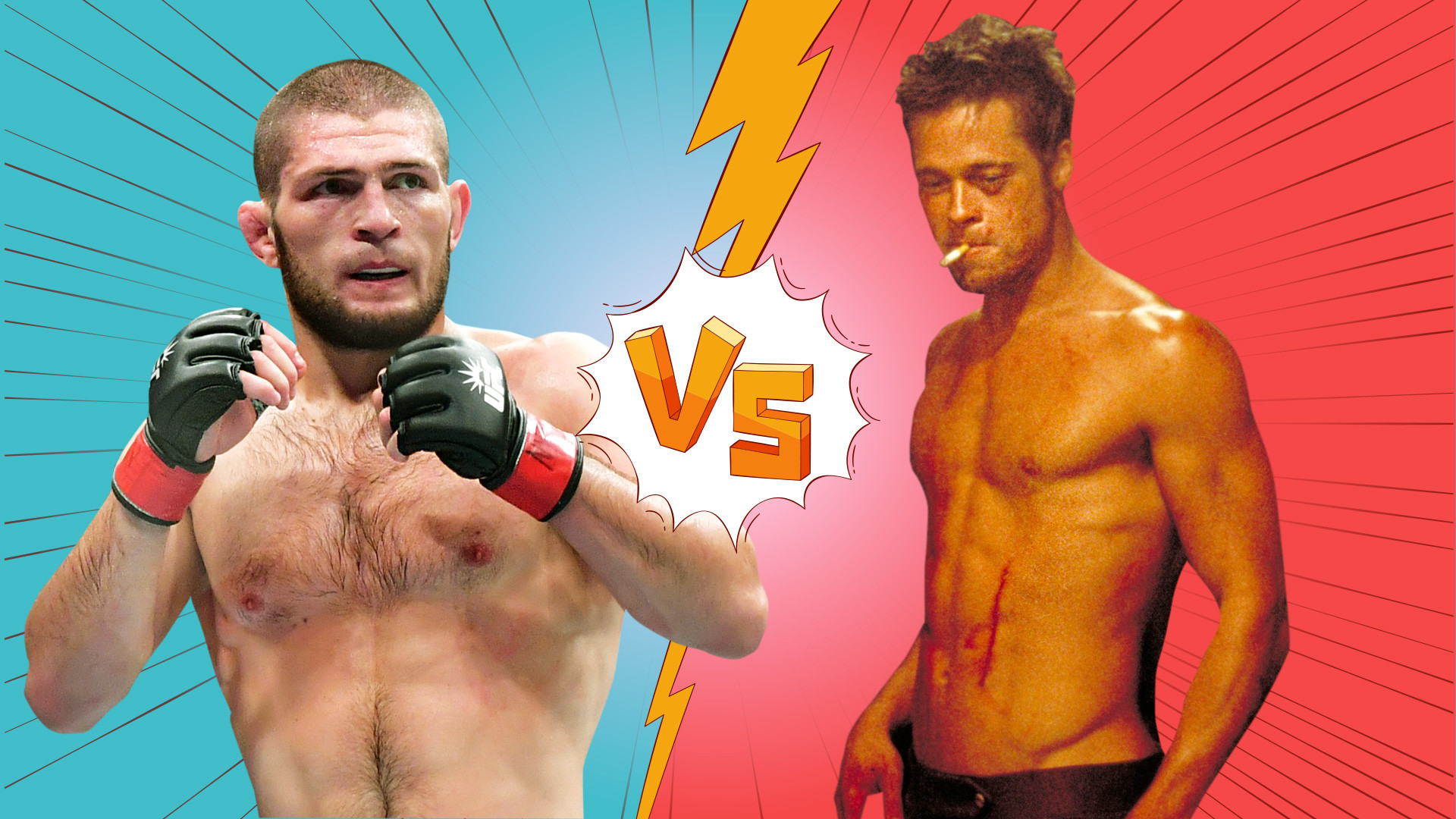 The first rule of Fight Club is: you don’t talk about Fight Club. Unlike Conor McGregor, and other natural-born show-offs among fighters, Khabib, who keeps his public persona relatively on the down low, genuinely looks like he could live by that rule. Which is why Tyler (no one really knows what he looks like, but according to the 1999 film, he resembles Brad Pitt a bit…) could make a great opponent for the Russian fighter.

If this fight ever took place in a parallel universe, we’d finally figure out who is stronger: a stone-cold professional like Khabib or a berserk amateur with an appetite for self-destruction, like Tyler is portrayed. Let’s just hope that, unlike the narrator in Fight Club, Khabib won’t find out after the fight that he was punching, kicking and choking himself all along! 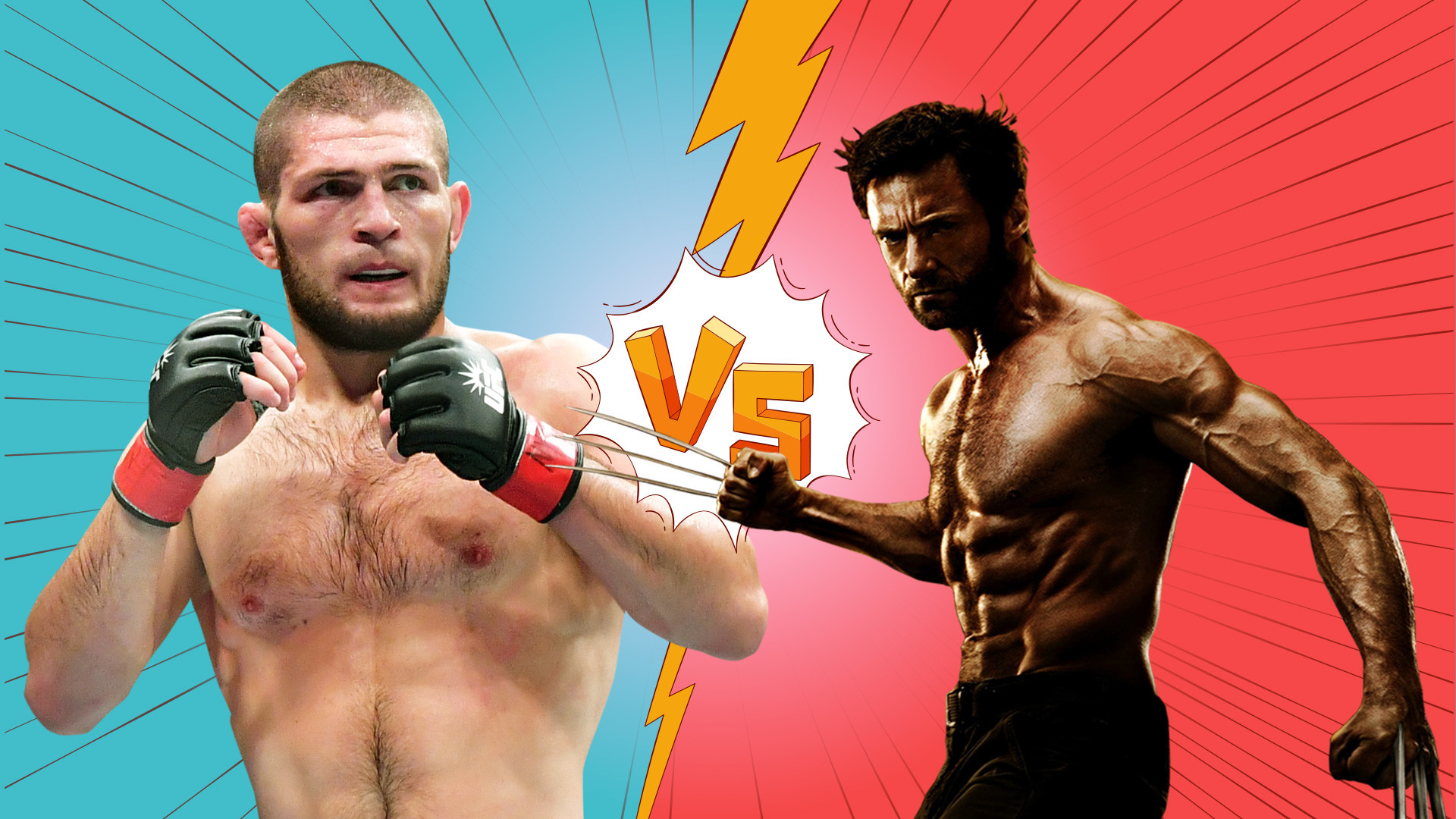 It was pretty hard to pick a Marvel universe opponent for Khabib. Iron Man? Without his suit, Tony Stark would be an easy target for the champ from Dagestan. The Hulk? Well, Bruce Banner turns into a green giant when he gets angry – and we can only imagine what Khabib might transform into when pissed off (we nearly saw it after his victory over McGregor), so let’s drop this idea!

So we went for Wolverine: a tough, furious fighter with loads of experience. Of course, Logan would have to fight without using his claws – and Khabib would be prevented from inviting his Dagestani brothers to join him. 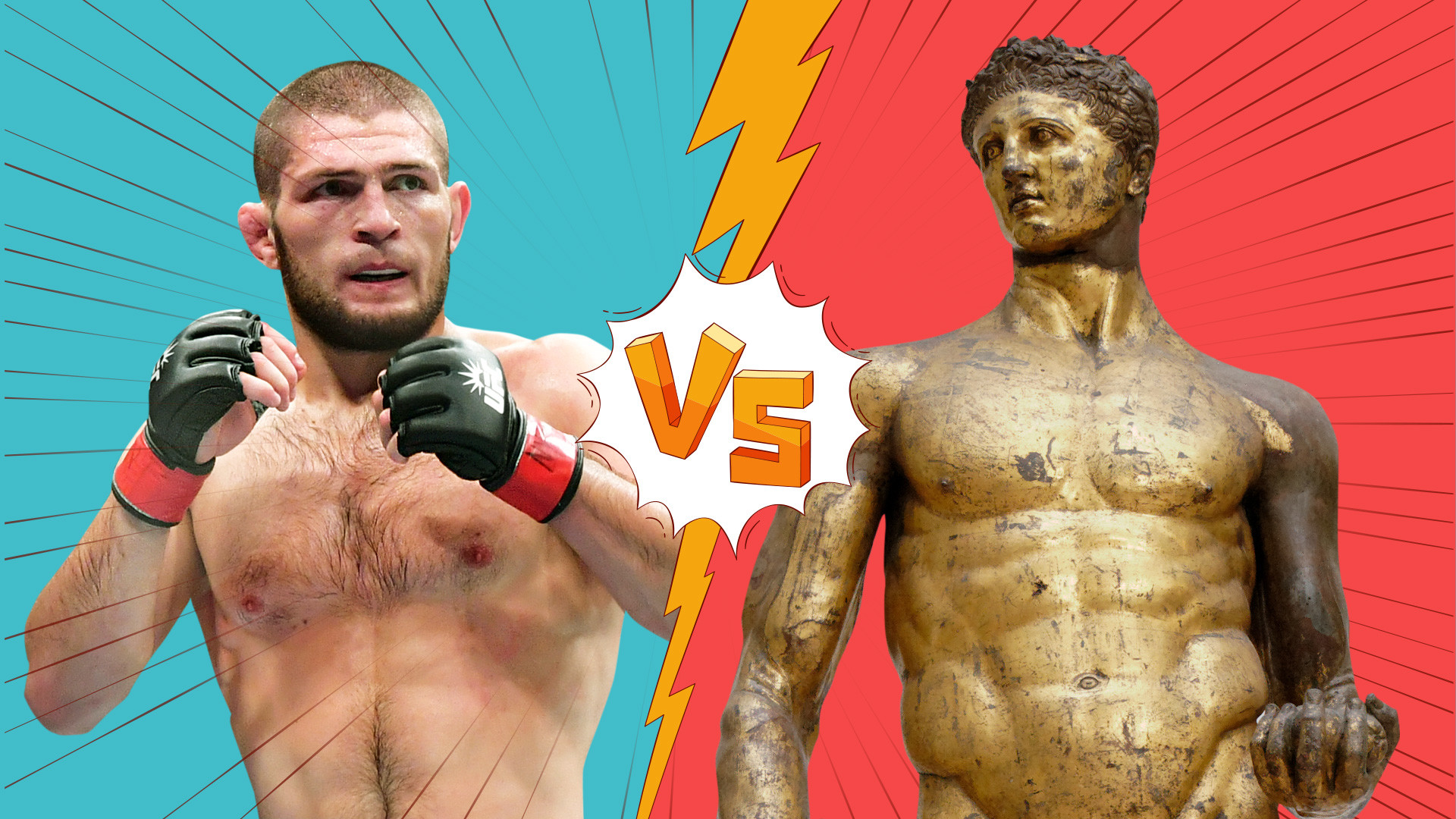 Fairytale icons existed long before the 20th century, so the next challenge we thought would be good for Khabib would be to face Hercules, the pride of Ancient Greece and Mount Olympus. Quite the opponent for the Russian fighter! Hercules, in his own right, would surely be glad to be in the spotlight again: he’s cool, freakishly strong, and has defeated every single monster in Ancient Greece (okay, but that was literally ancient mythology!). Being Zeus’ son was ‘cool’ back then, but nowadays, it’s the number of Instagram followers that counts – and probably more people know about Khabib than Hercules today! 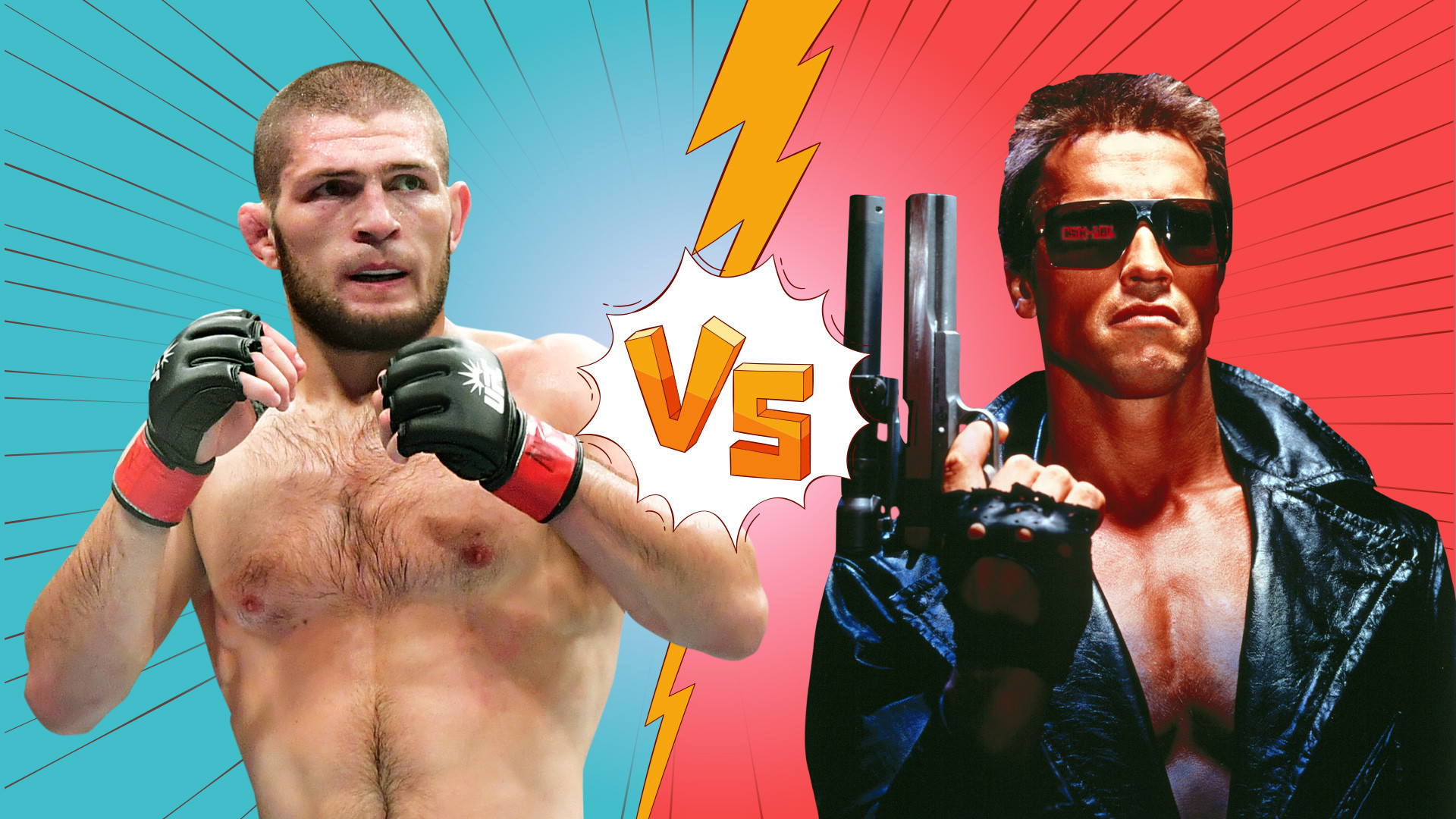 After Khabib successfully beats Tony Fergusson, Tyler Durden, Wolverine and Hercules (this will probably happen by 2021, fingers crossed!), the evil machines from Skynet will understand that it is Khabib, not Sara Connor, that is humanity’s last hope, so they will have to send the Terminator from the future to eliminate the threat to their supremacy. But the only way to defeat Khabib will be in a fair fight, so the old robot will also have to go into the octagon with him.

As the Terminator is, strictly speaking, a machine made out of steel, it will definitely be hard for Khabib to win this one. So he will probably have to sit down with his father and coach Abdulmanap and re-watch The Terminator, looking for clues on how to beat the metal killing machine. But all six movies? That’s a kind of a fight in itself! 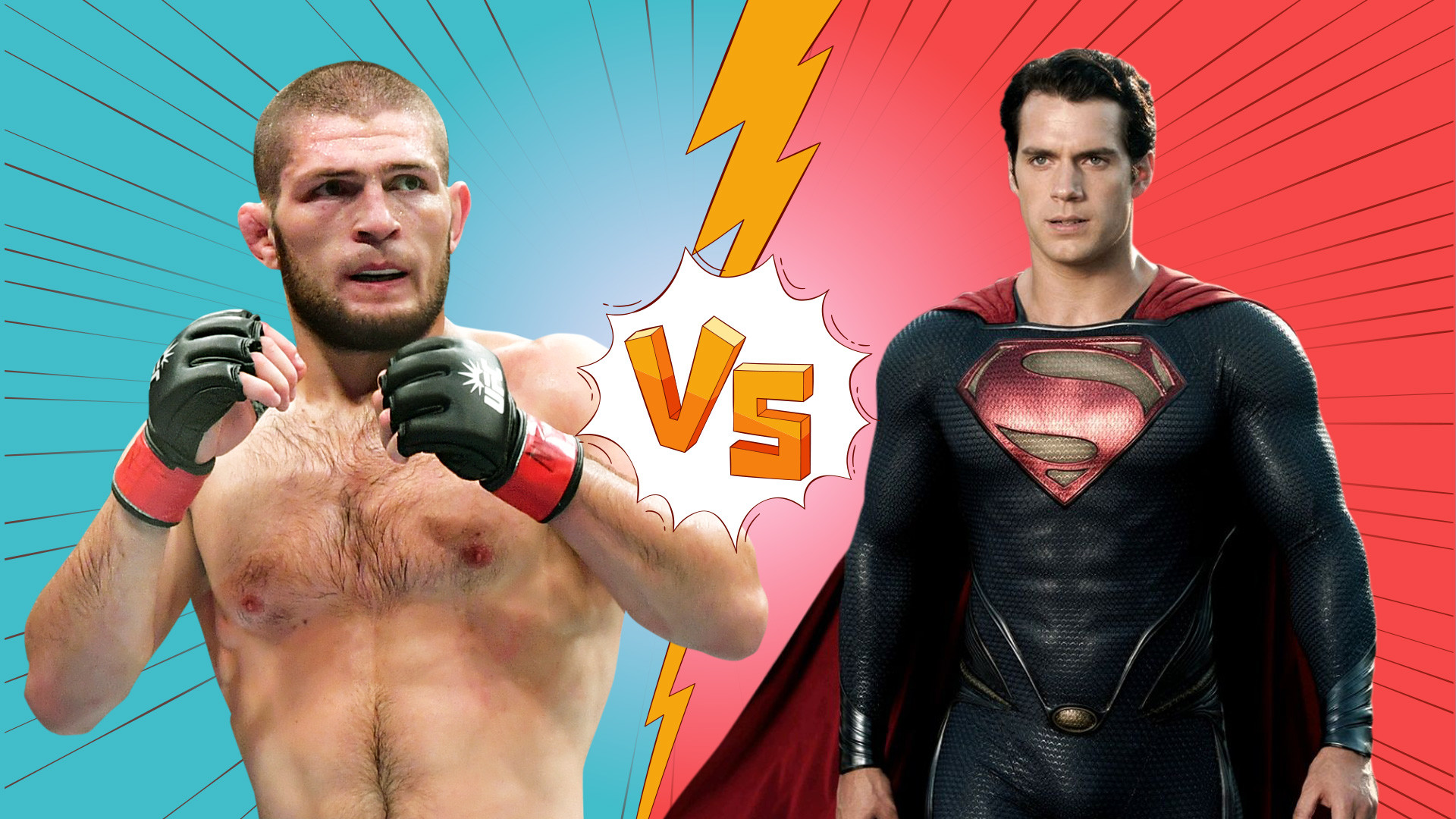 Superman is, basically, the ultimate fighter, a God-like alien who can defeat anyone on Earth. Seems like a worthy opponent for Khabib, finally. We’re not sure what he would do against Superman (probably put on a championship belt made of kryptonite, but it would be hard to get one, even for the UFC champion), but have no doubt: he’d figure something out. If he did defeat Superman, Khabib could definitely finally retire, delete Instagram and dedicate himself to fostering future champions of the universe in Dagestan.