Russians dressing up as animals: Harmless fun or sexual deviation? 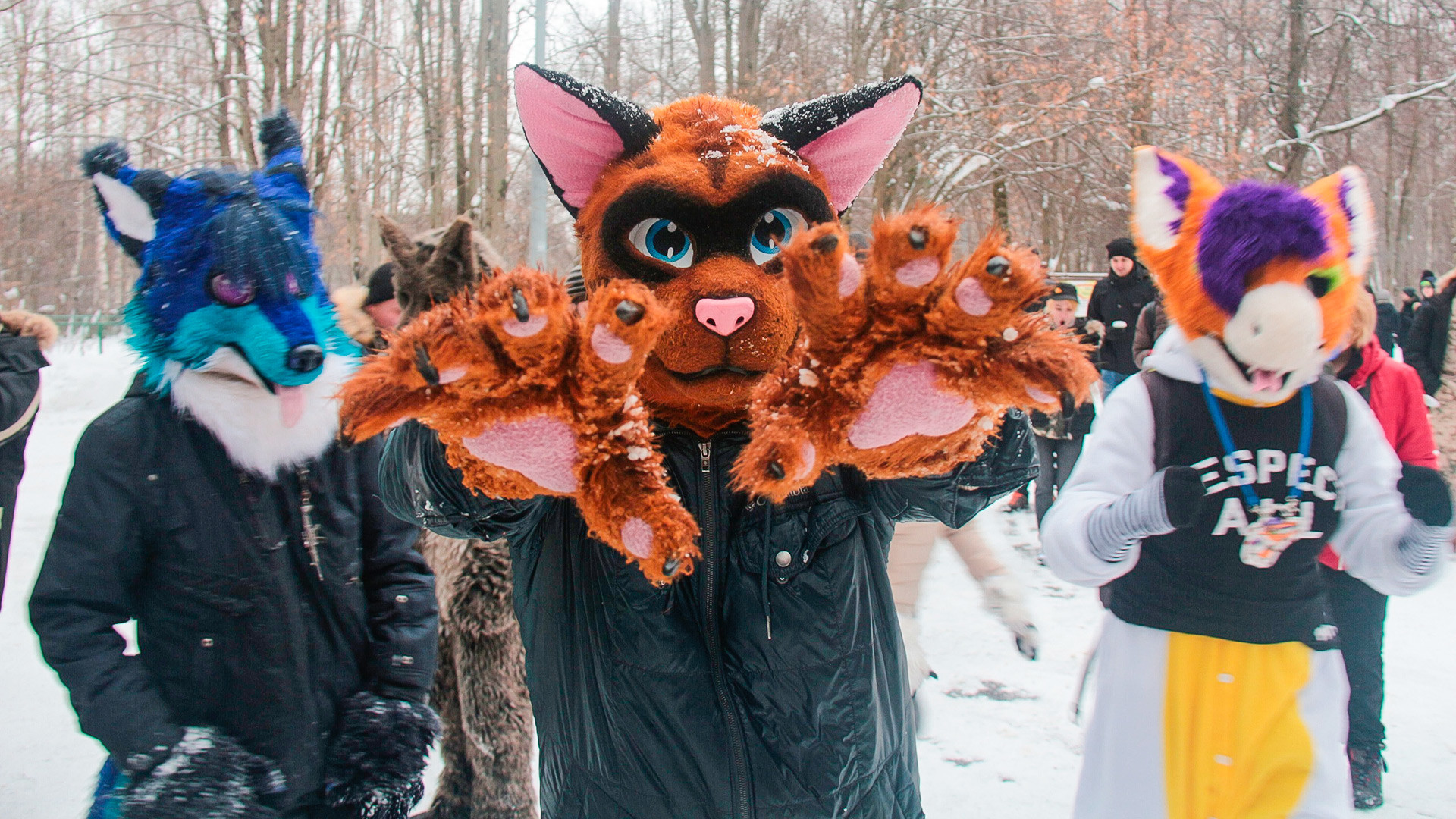 Personal archive
Furry tigers, cats, and wolves stroll leisurely around parks to the delight of young children. Yet some activists are trying to stop the practice, suspecting the humans underneath the costumes to be guilty of bestiality.

The newly opened skating rink on the main square of the city park in Noginsk (59 km from Moscow) is crowded with people, mostly families. While young people are sipping mulled wine to fend off the cold snap, some children, together with their parents, are testing the solidity of the ice. Others are dancing around the decorated fir tree to the sound of Christmas music.

A group of three children spot a woman in a black cat suit, gracefully pacing across the square. Immediately they surround her, blocking all escape routes. One boy starts tugging her tail, another pulls her large fluffy ears. The third child, a girl, boldly thrusts her hand directly into the jaws of the cat. 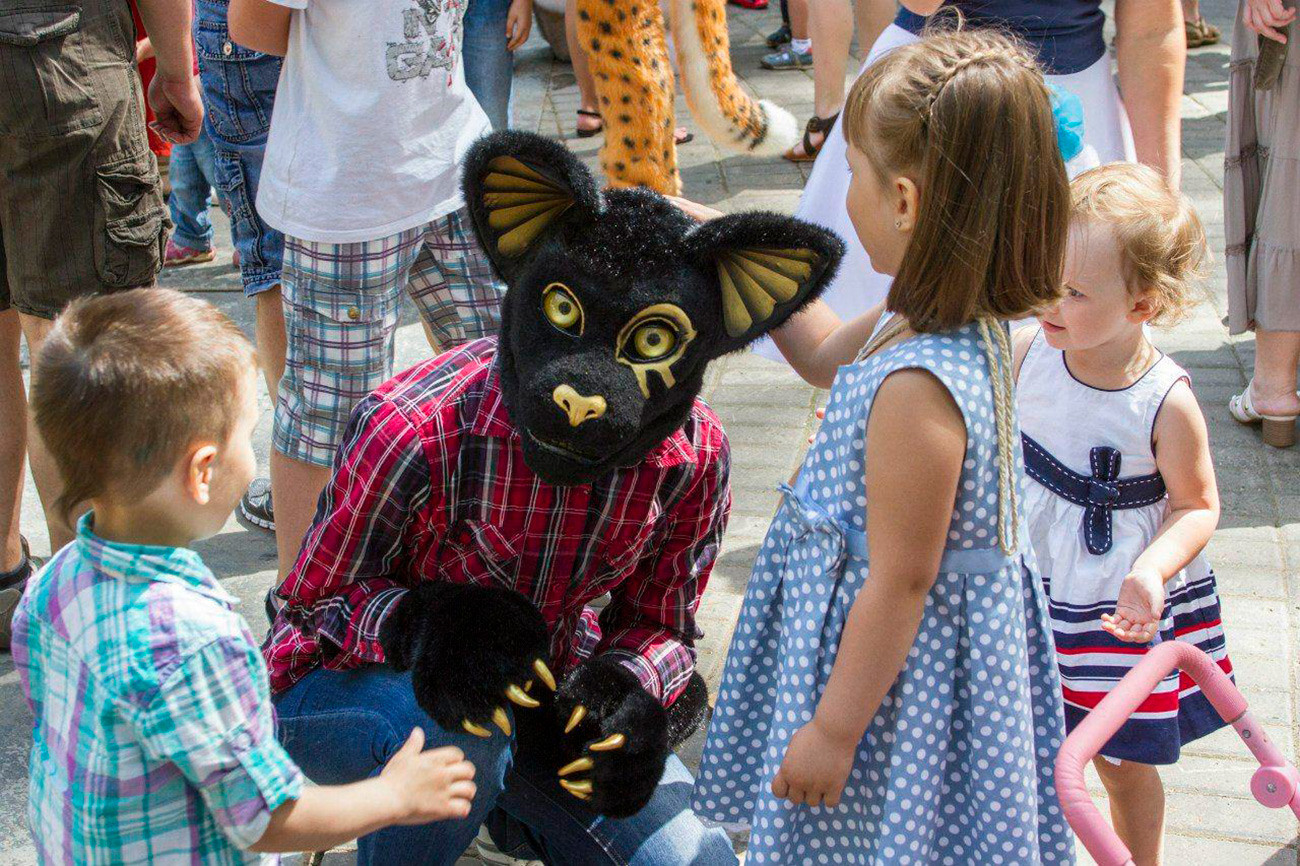 “And that’s despite me being much bigger than them. Feeling a child’s hand on my nose under the mask was a surprise and quite amusing. Also not very pleasant, because her palm was sticky,” the cat recalls the experience.

This is a typical outing for Bastet (real name Tatiana), a 30-year-old costume designer. This short, doll-faced blonde is a furry, i.e. an enthusiast of fursuiting and anthropomorphized animals. Furries create art and fan fiction about various animals, and appear in public dressed as tigers, wolves, cats, even unicorns and dragons.

The purr-fect cure for boredom

The Russian furry community arose in the late 1990s after the release of The Lion King, says Dreamer, a short, slim 36-year-old IT professional. He is one of the oldest members of Moscow’s furry community.

“The first meetups took place in 2000 in a small basement off Old Arbat. There were no more than ten people. Plus there was a small online forum where students uploaded Lion King-related artwork and fan fiction,” says Dreamer. 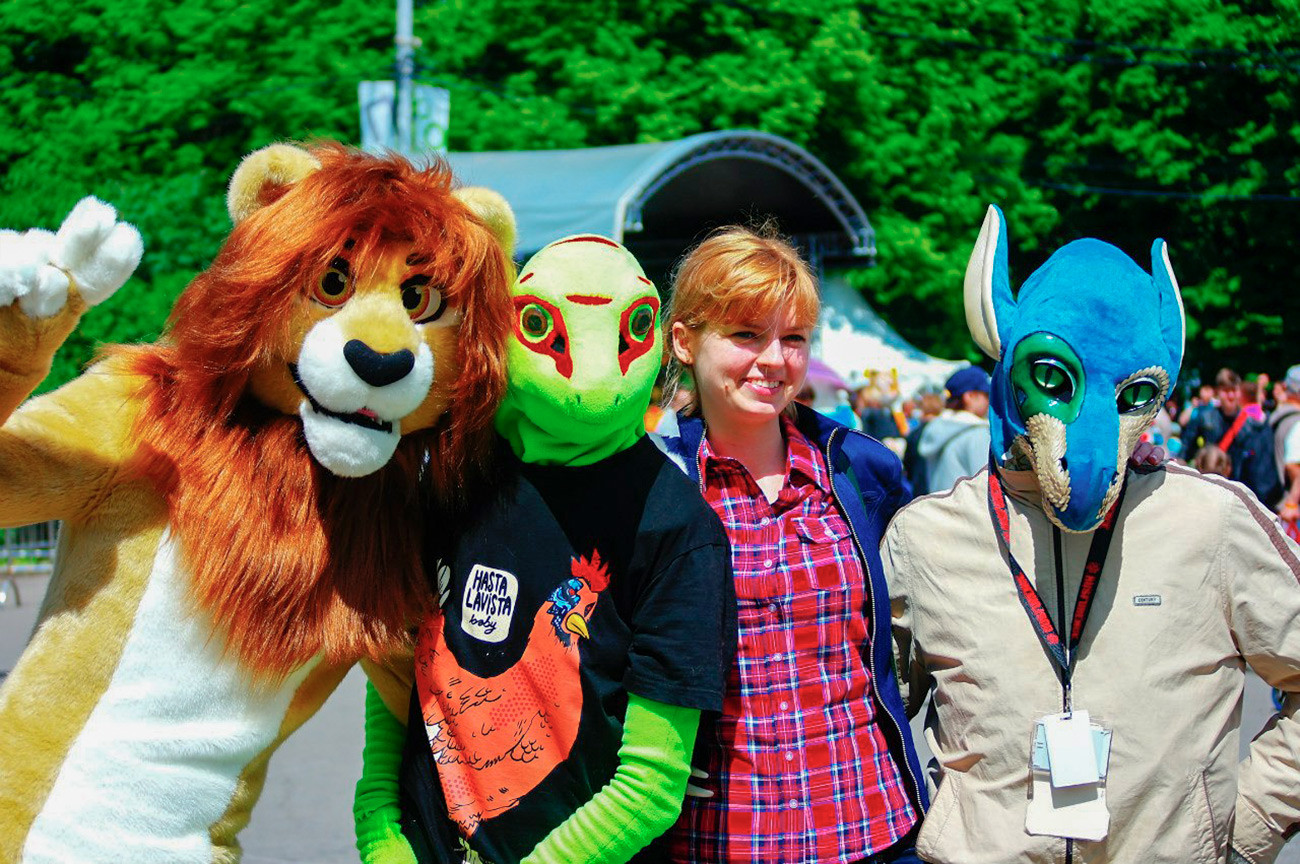 He himself lived not far from Yekaterinburg. Having learned about furries from the forum, he attended his first meetup in Moscow only four years later. Despite his shyness and lack of a suit, he was warmly received. “It let me escape from the daily grind, at least for an hour, and say to myself: ‘Hell, I’m a lion, I have paws.’”

Thanks to the spread of social networks, the furry community in Russia began to grow. And in 2004 the first Rusfurence (Russian furry conference) was held.

“We rent a hotel in suburban Moscow, give costume-making and drawing master-classes, go for fursuit walks, and hold competitions. In the evening, we have furry disco parties. It’s like a regular hobby group.” 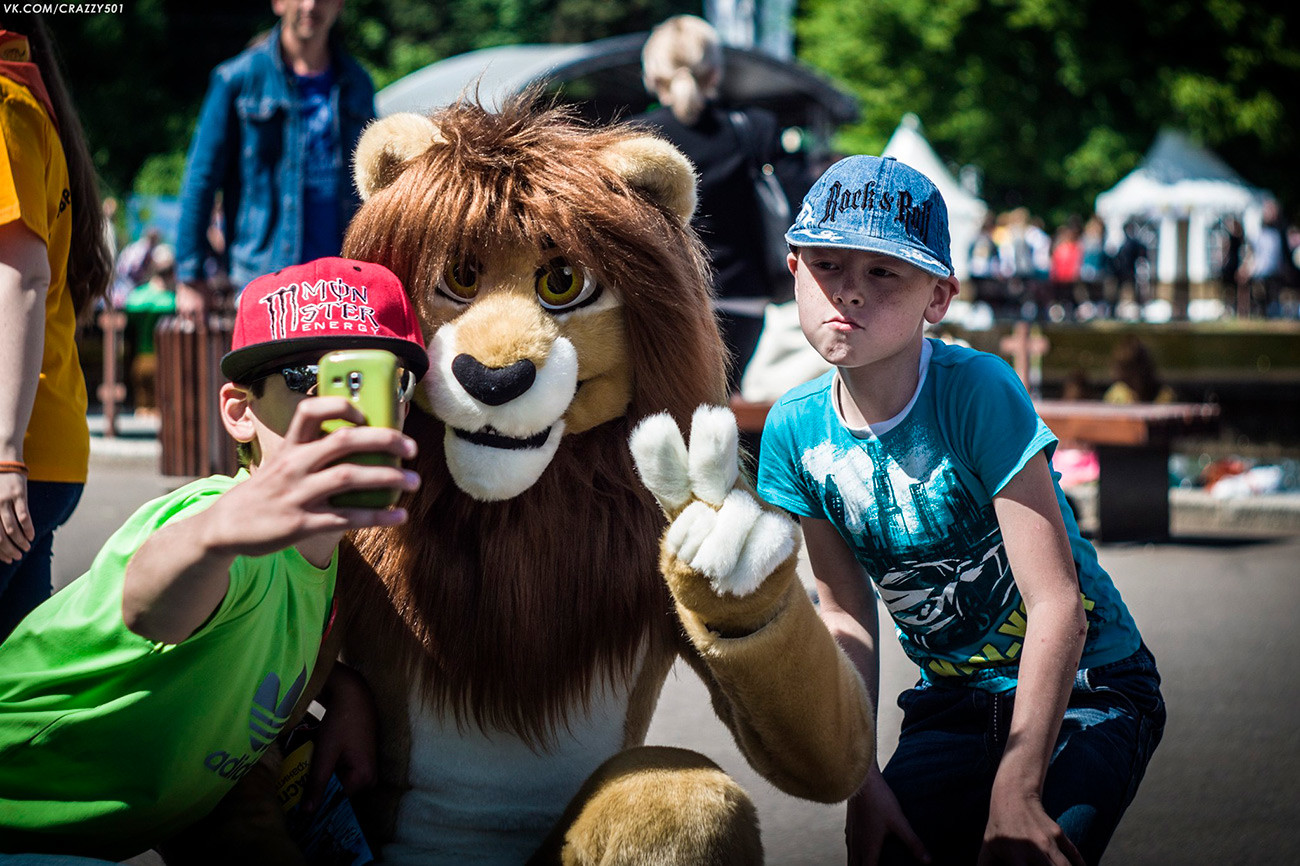 According to Dreamer, about 400 people, including guests, show up at the “conference.” Today, Moscow is home to no fewer than 1,000 furries, and most are barely 18 years old.

Dreamer himself does not like fursuiting with students; he prefers playing board games with less active furries.

“I try to find common ground with other furries, and bring something new to the community,” he explains.

Are you kitten me?

Bastet didn’t end up in the furry community by chance.

“It was the early 2010s. I was working as a body artist, and my projects were mostly animalistic. Photos of my work were distributed in furry communities, people started following me and saying that what I was doing was furry-related,” she recalls. 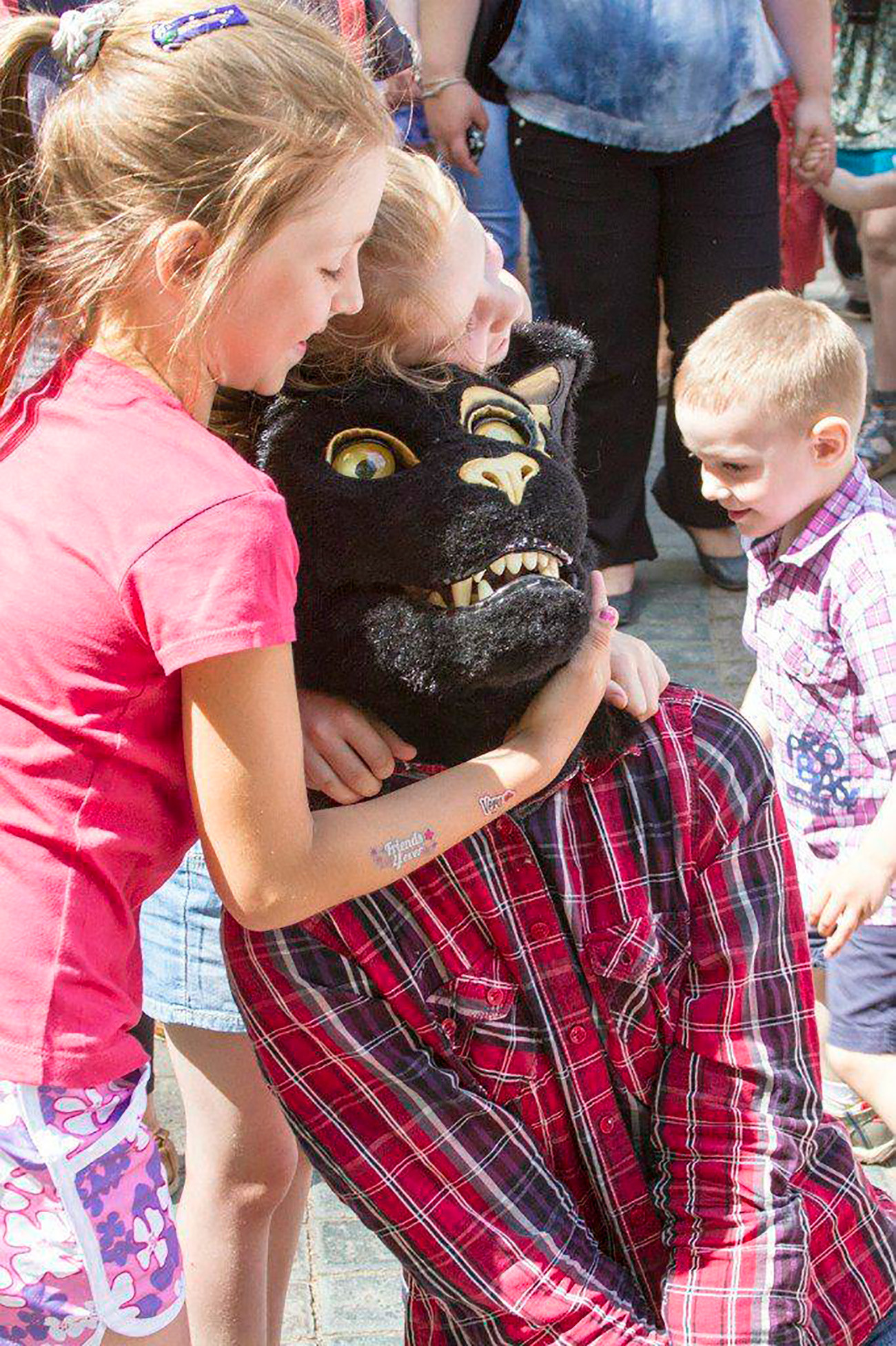 “Furries don’t have to wear a suit, but then they won’t get noticed. I don’t even remember how I became a cat, someone just suggested it. But as a cat, I really get into character. I wouldn’t say that I purr like a cat. Just that my movements change, they become smoother and more playful, less abrupt,” says Bastet.

She believes that passers-by see her not as a person, but an “oversized kitty.”

“People play with me like a cat, scratch me behind the ears and on the back. Yes, middle-aged adults switch into childhood mode quite readily. And they always smile at me,” she notes.

The less cuddly side of furriness

Not all animal-related pastimes are harmless.

The picture shows a German shepherd. Its hind and front legs are shackled, and a gag is inserted in its mouth. An oblong object is thrust under the tail. The dog’s eyes were wet with tears, gazing at an invisible master, waiting for help.

Under this picture, users of a private group on the Russian social network VKontakte are invited to select an action that they would like to do to the dog — punish it, “sexually train” it, or even take the place of the dog. About 100 people responded out of 1,400 group members. Many are looking to have sex with a dog for a fee; others offer the “services” of their own dogs. Some members describe themselves as furries. 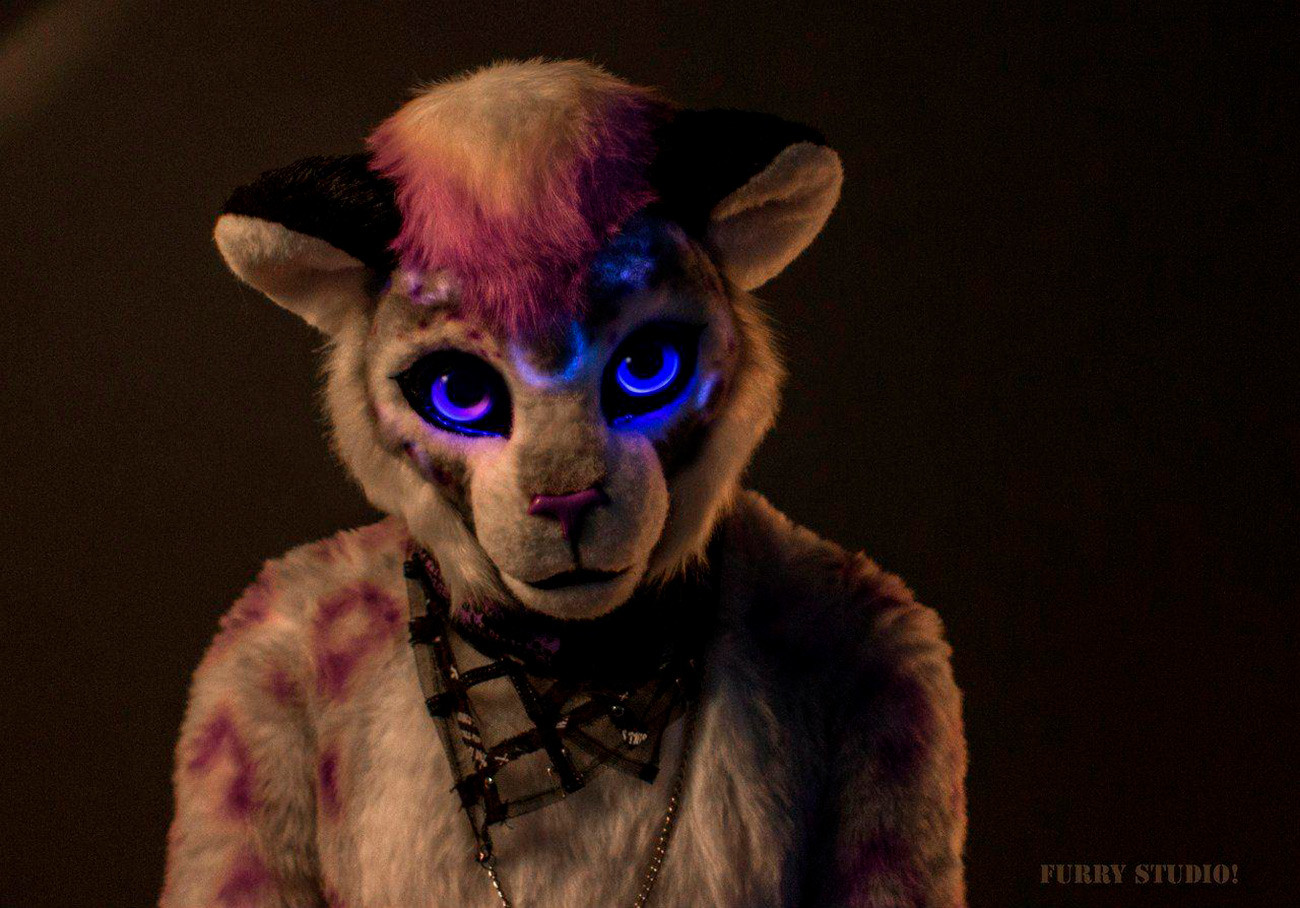 “I’m a furry, but not 100%. Some furries may be prone to bestiality. But I think people here are just looking for diversity,” states group member Alexander Nelyukin.

Another member, under the handle Fox Fox, admits that he gets turned on by such images when “in the mood.” Alexander Shirokov, another group member, is sure that some furries do sexually fantasize about animals, but “fantasies and reality are very different.”

According to Paul Jacobson, an Orthodox activist, all furries are zoophiles who instill their depravity in children. 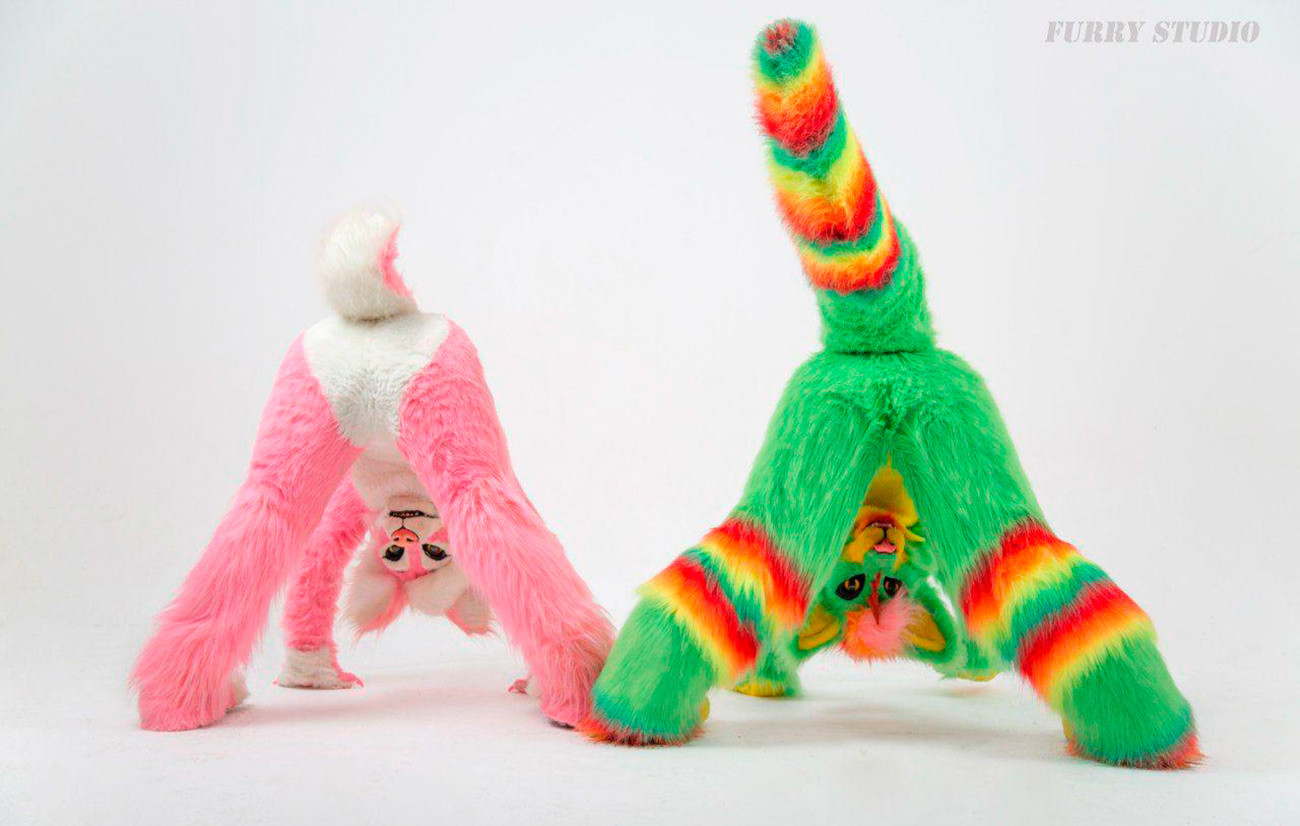 “The animals are deliberately drawn in such a way as to arouse the vilest feelings in the target audience,” Jacobson is adamant. “Teenagers looking at it start to direct their sexual energy toward images of humanized animals. That’s how paraphilia and other fetishes are formed.”

He is also troubled by the fact that some furries have a non-traditional sexual orientation, and gain the trust of children by dressing up in animal costumes. 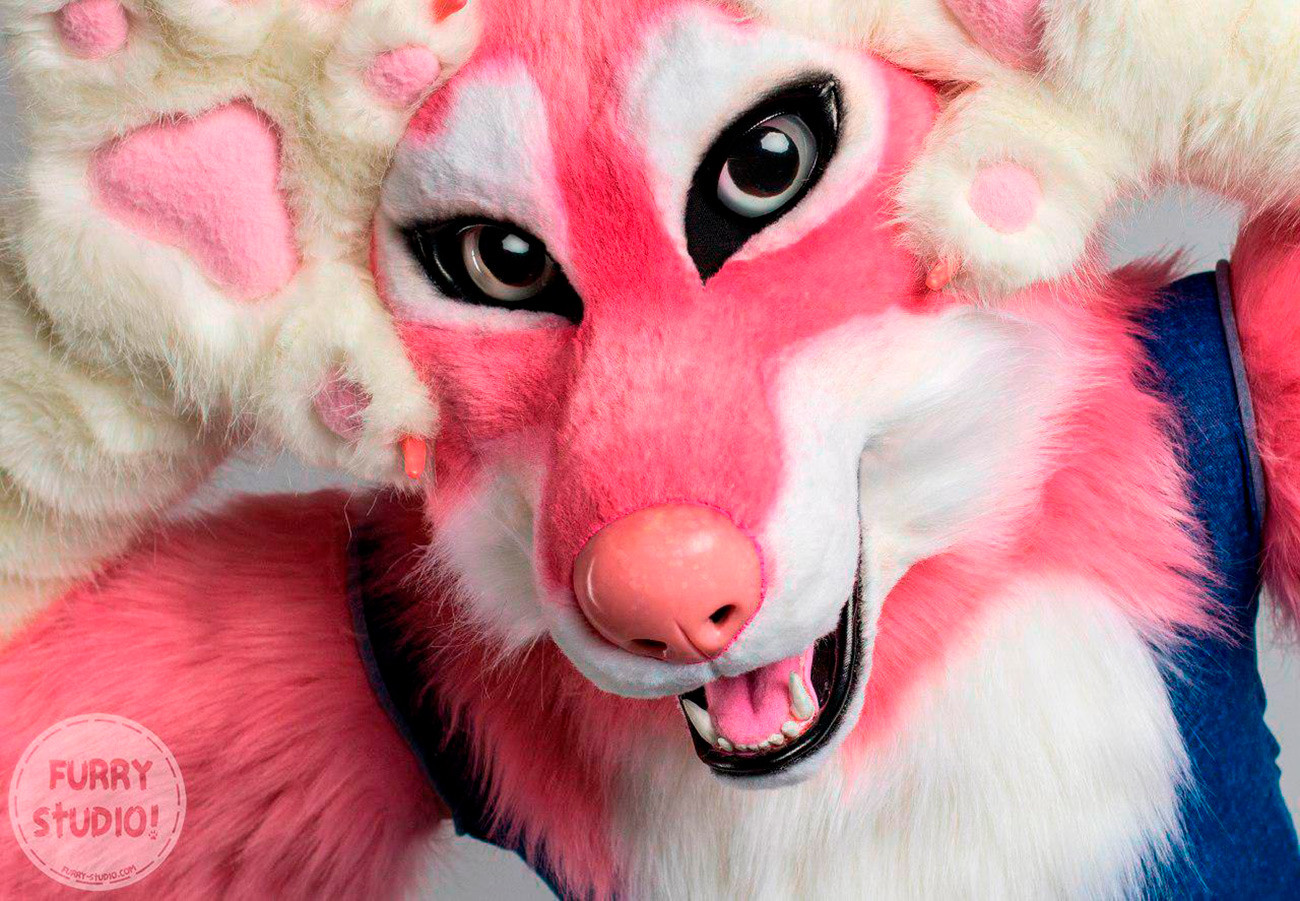 Most furry communities and accounts that spread bestiality have already been blocked. Meanwhile, other members of the furry community deny Jacobson’s allegations.

All the same, it is becoming harder for furries to get into parks, asserts Anton (nicknamed Cat Bandit), one of the main organizers of furry walks in Moscow. Even suitless, he resembles a cat — one that has overstuffed itself with cream.

“These days, every walk has to be coordinated with the park authorities. Sometimes they ask furries to remove their headgear at the entrance, and sometimes they don’t let them in during public events,” says the organizer. 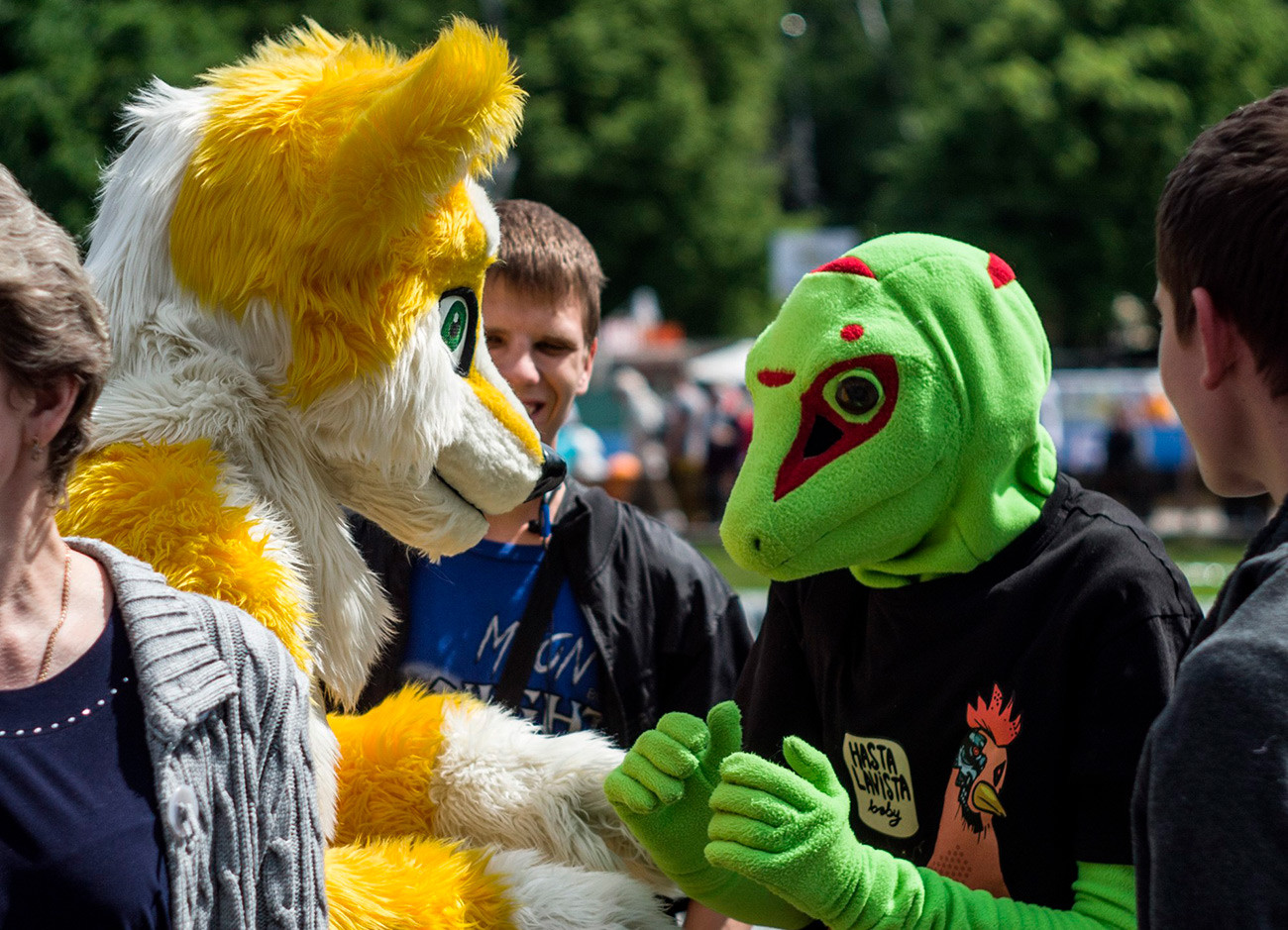 In his words, the furry squad is no longer allowed into VDNKh (a large amusement park in northern Moscow). In response to Russia Beyond’s request, the park’s press service cited the official reason as reconstruction works.

“They authorized a meetup in the spring, but so many of us turned up that the park staff mistook it for an illegal rally. We were escorted to the exit by a whole convoy of security guards,” he complains.

That said, the Russian furry community is too small to be officially banned, reckons Anton. Besides, most passers-by react positively. 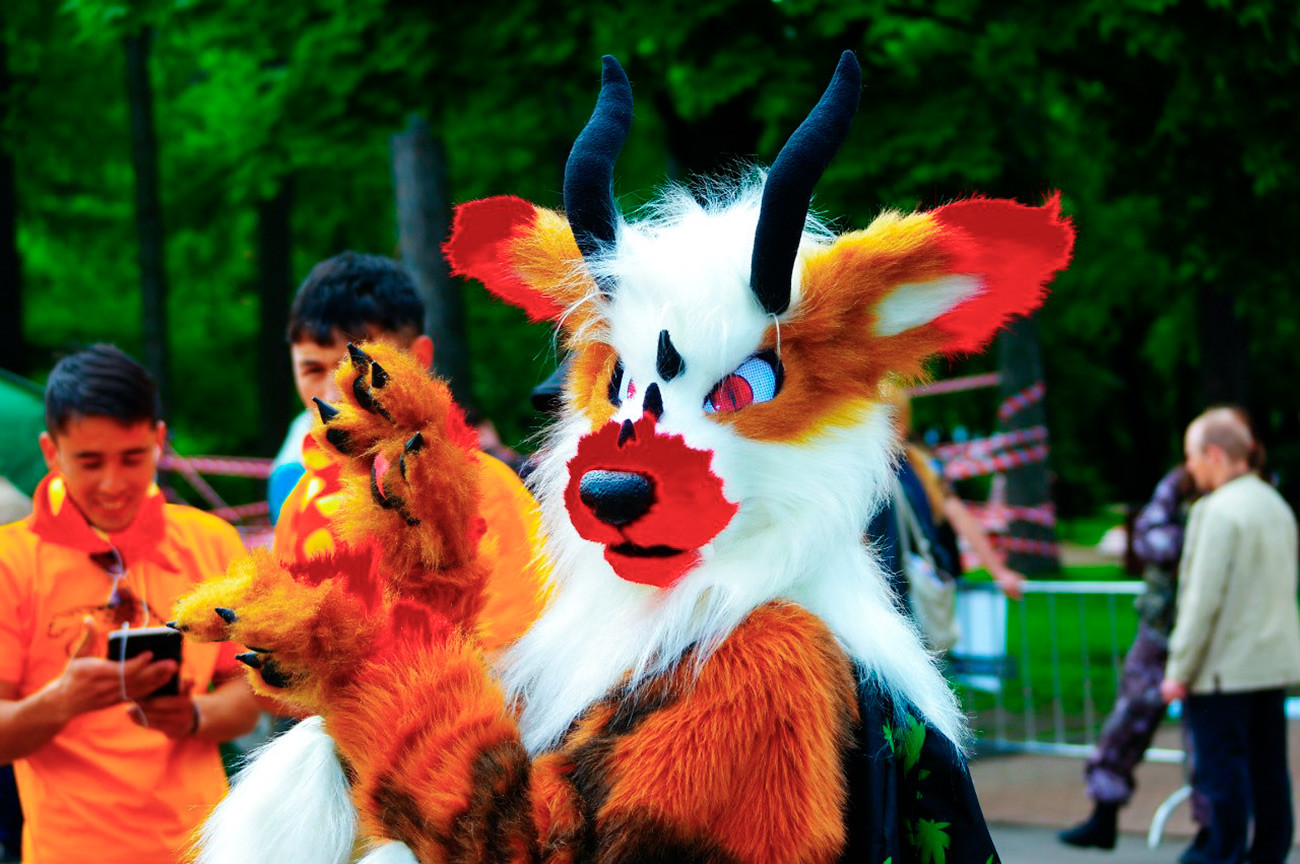 “I don’t just walk around parks; sometimes I visit orphanages and entertain the children there. Everyone wants to look at you and take a selfie, it’s such a buzz,” says Anton.

“In a suit, there’s no communication barrier, even language. You can just meow and move like a cat. I was always uncomfortable about touching strangers. But hugging is the norm for furries,” she explains. 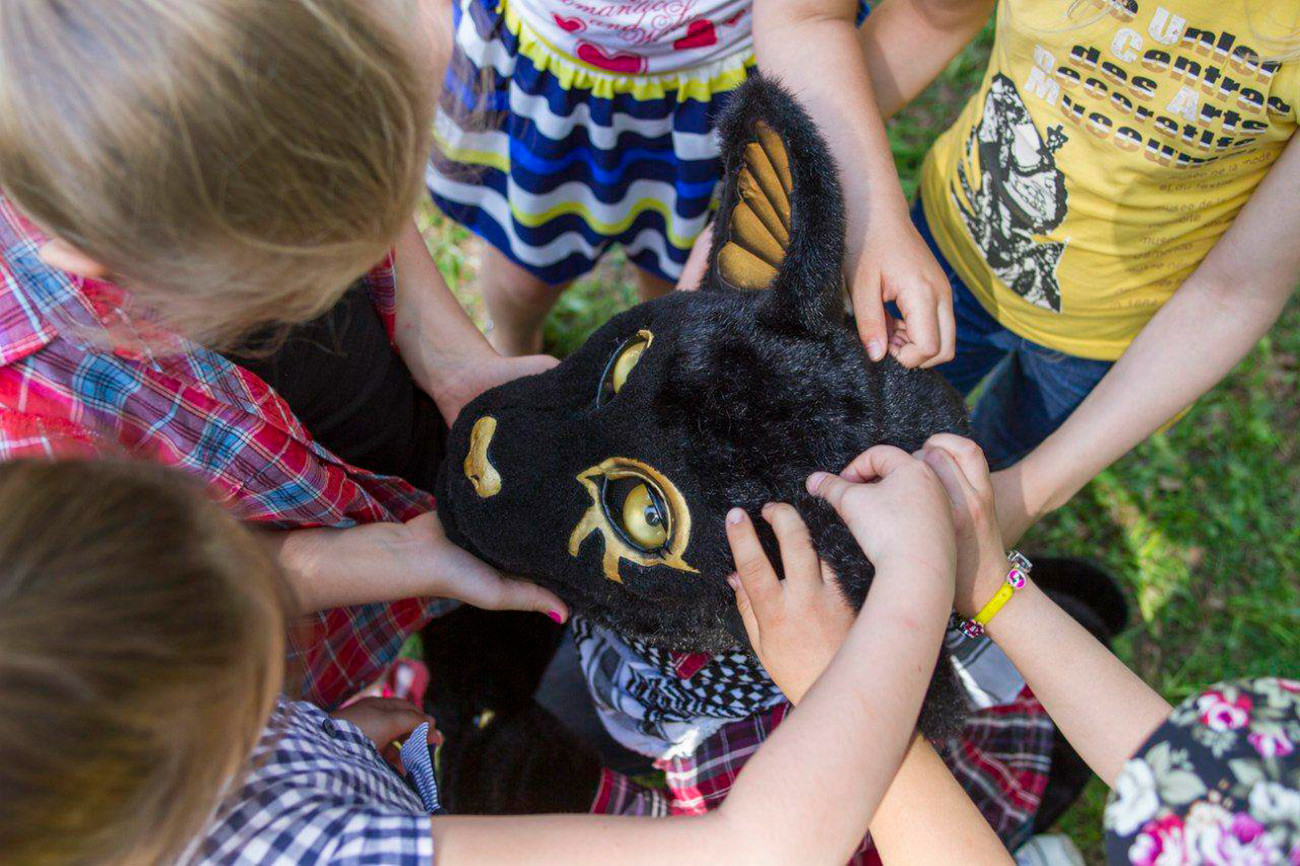 What Bastet likes most of all is children’s genuine acceptance of her feline alter ego.

“Children sometimes cry and have to be dragged away from me. They want to take me home with them, and tell me about their mom, dad, and granny, where I can sleep, and what color bowl I’ll have. Sometimes it’s worth being a furry for that alone,” she concludes.