This 5yo girl is Russia's most popular YouTuber 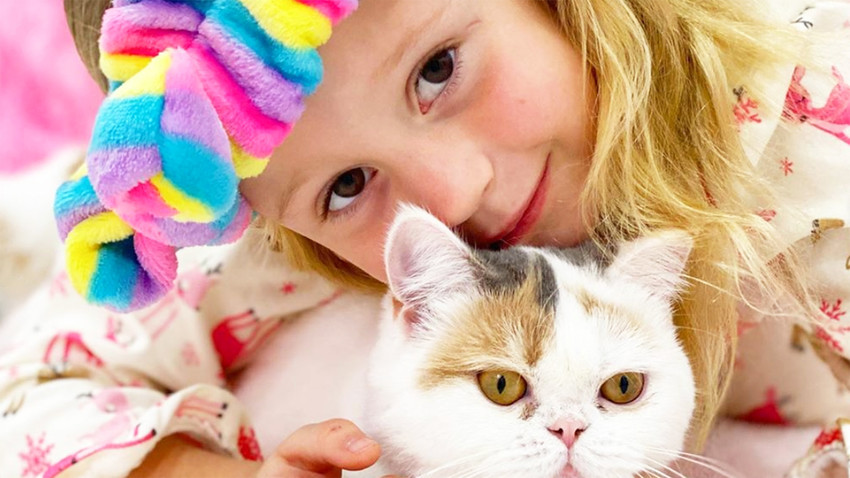 Anastasia, of the Like Nastya YouTube channel, and her father with their four YouTube Diamond Creator Awards. Date 9 September 2019
Forbes has published a ranking of the world's highest-paid YouTubers. Among the top three is Nastya Radzinskaya from Krasnodar Territory. What do we know about the five-year old Russian who made $18 million last year.

Nastya was born in 2014 in Tuapse (1,507 km south of Moscow). At birth, she was diagnosed with a severe form of cerebral palsy resulting from intrauterine trauma; the doctors said that the girl would never be able to walk or talk. Her parents, 42-year-old Sergey and 34-year-old Anna Radzinsky, had Nastya examined by numerous doctors, and devoted all their time and energy to their child. By the age of two, she no longer displayed any signs of the debilitating affliction.

"Either the treatment and our love helped, or the original diagnosis was wrong," says Anna Radzinskaya in an interview with Forbes.

Therapy through filming, and her first vlog income

To prevent a relapse of cerebral palsy and to monitor their child's development, the parents decided to develop Nastya's acting ability. Anna bought several toys for Nastya and let the girl unpack them. The parents recorded the girl's reaction on camera and uploaded the videos to a YouTube channel called Like Nastya. According to Anna, the girl was not at all shy in front of the camera, displaying genuine joy when receiving gifts.

“We didn’t even tell her what to do: we just filmed the child as she is. Children are so cute,” says Radzinskaya.

After six months of filming, YouTube paid the Radzinsky family 20,000 rubles ($324) in one day. That was when the parents saw a business opportunity and completely changed their approach to vlogging.

A new format, travels in Asia and a move to America

To add some variety to their content, Nastya and her parents traveled to Asia. The trip lasted nine months, and during that time the parents shot vlogs and stories about Nastya having fun on amusement park rides, choosing clothes and trying local food. The girl began to be recognized in Malaysia, Indonesia and Thailand, and the number of subscribers reached a million, Nastya's mother recalls.

At that time, Anna ran a bridal salon and an event agency, while Sergey had a construction company, but those businesses brought little profit and took a lot of work. Anna closed her business, and Sergey appointed a manager to run his. It was then that the parents began to hire editors and visual effects specialists and to pick up unusual toys and clothes for the videos.

Anna says it was difficult to find something unusual in Russia. Due to the cold weather and the shortage of interesting props for the vlog, the family moved to Miami and rented a house there.

Nastya's father began to participate in his daughter’s videos: he rides toy sheep, builds water slides for her and makes cakes, dressed as Minnie Mouse. At the same time, he is responsible for the financial and legal aspects of the project. Anna writes scripts for videos, orders props, hires editors and even composers who create original music. One video costs $1,000-2,000 to make, while the family's' monthly income from the videos ranges from $200,000 to $500,000.

Nastya's parents are not averse to product placement. If you see Nastya in Adidas sneakers, or a Mercedes suddenly appears on screen, then you can be sure that advertisers paid at least $10,000 for this, a standard rate for the channel. The only direct advertiser is Danone: several videos feature Nastya eating the company's dairy products. The amount of the contract has not been disclosed.

In 2018, the Like Nastya channel was blocked over a video in which the girl was shown eating cake: YouTube considered the video to be promoting junk food among children. Access to the channel, however, was restored several months later. In the meantime, the Radzinskys launched several more channels in different languages.

It was then that the Radzinskys signed a contract with Yoola, a digital media company that resolves conflicts with YouTube, communicates with advertisers and offers tips on creating content.

“For example, in one of the videos, Nastya was jumping on a trampoline and you could catch a glimpse of her underwear. Our lawyer watched the video and immediately said that it would not be allowed to publish and had to be reshot,” Forbes quotes Yoola COO, Anna Gradil, as saying.

Success and plans for the future

Anastasia’s seven channels have a total of 107 million subscribers. Her videos in Russian, English, Arabic and Spanish have been watched a staggering 42 billion times, while her most popular video from a sheep farm received 770 million views.

According to Forbes, next year Nastya's parents plan to release a mobile app, toys and a book.

While her parents spend all their efforts on creating new videos, Anastasia herself is not afraid that at some point she will cease to be popular.

“Anastasia is already working on a plan B. She is dreaming of becoming a dolphin trainer and a cat doctor,” Forbes reports.