10 Russian online banking features that you probably don't have 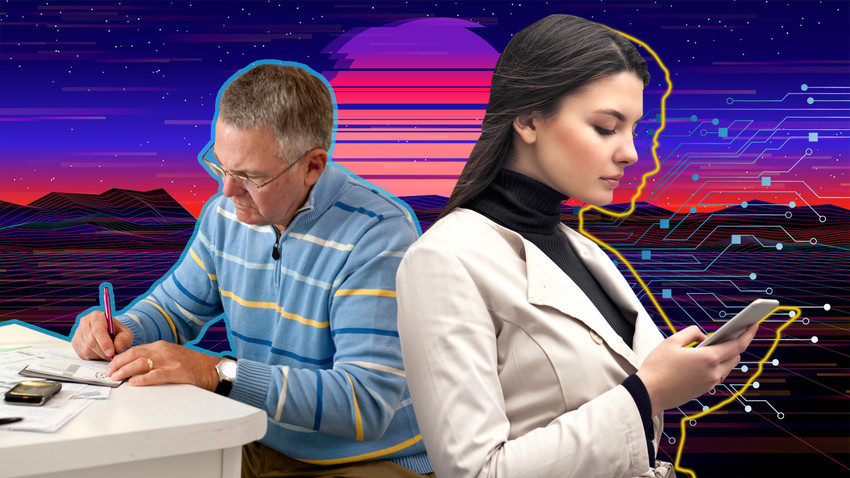 Getty Images, Freepik
We studied the services offered by Russian banks and have come to the conclusion that we live in 2119 and not 2019.

Private banks and credit cards appeared in Russia relatively recently - in the early 1990s after the collapse of the USSR. The local banking system developed from scratch, and didn’t have to depend on old software solutions, thus avoiding many of the intermediate development stages that more advanced economies had to go through.

As a result, Russian banks are now among the most innovative in the world. Here are some of the special features they offer that might not have yet reached other leading countries.

Every self-respecting Russian bank has a mobile app that people use to pay for their mobile connection and internet, as well as their utility bills, taxes and fines, and even for their children's university or college tuition.

Moreover, you can use such apps to transfer money to anyone who has a bank account. And the two don't have to have accounts in the same bank: money transfers are possible from and to any Russian bank. True, you will have to pay a small commission, starting from 30 rubles ($0.48), per transfer. But if you transfer money to someone who has an account in the same bank as yours, then there is no commission. At some banks you can transfer money to accounts of other banks without commission as part of a monthly allowance. All money transfers are usually done in a minute.

Finally, push notifications or text message alerts about all transactions - whether it be transfer of funds, payment of bills or shop purchases - are sent as soon as an operation is complete.

In Moscow and other major cities any purchase, even fast food bought in the street, can be paid for with an NFC-enabled (contactless) bank card, Apple Pay or Samsung Pay. For those who can't be bothered to take their phones out to pay for their purchases, Russian banks now offer NFC-enabled rings and bracelets.

The principle of how they work is simple - the bank gives you a ring or bracelet, you download the necessary app onto your smartphone and sync the card data with the new accessory. You can connect only one account, either debit or credit. The main thing is not to lose the accessory, otherwise criminals can make purchases until you block your account. 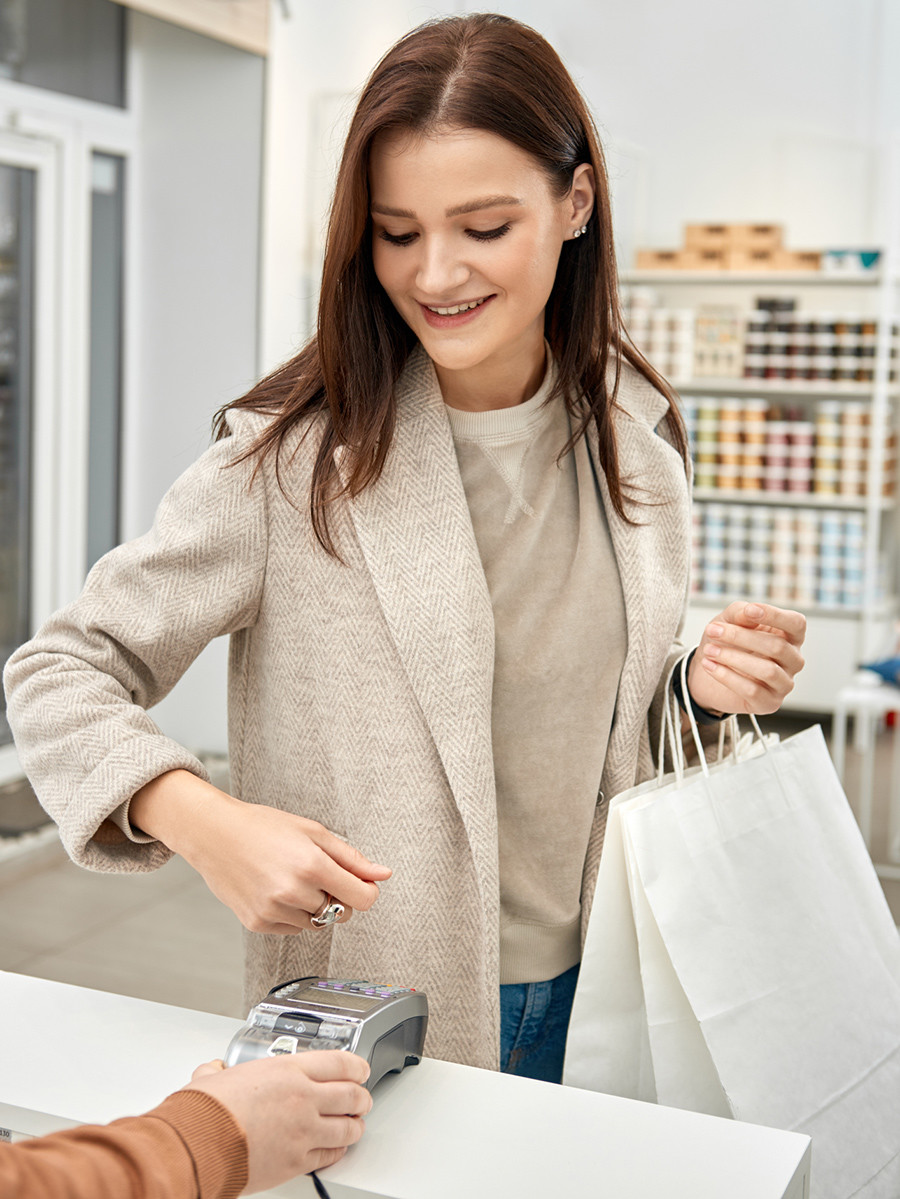 3. Instant issue of debit and credit cards, with home delivery

Only a few years ago, in order to open a bank account you had to go to a bank branch, queue for half an hour and then wait another half an hour for a bank employee to fill in the application form. As for credit cards - to get one you had to bring many supporting documents.

Nowadays, you just fill in an application on the website of almost any bank and get a reply within minutes. The following day (in most cases) a courier will deliver the card free of charge and help you activate it. Some banks are prepared to deliver their cards by courier even to cities in which they don't have branches, as well as to inaccessible places and remote areas of Russia.

You no longer have to wait a long time for an operator to answer your call. The mobile apps of many Russian banks have built-in online chat messengers whereby a web bot can answer the most frequently asked questions or, if this doesn't help, it will put you through to a human operator. Some banks suggest that you ring their hotline from the app on the internet so as not to incur mobile charges (this may be particularly relevant when roaming). 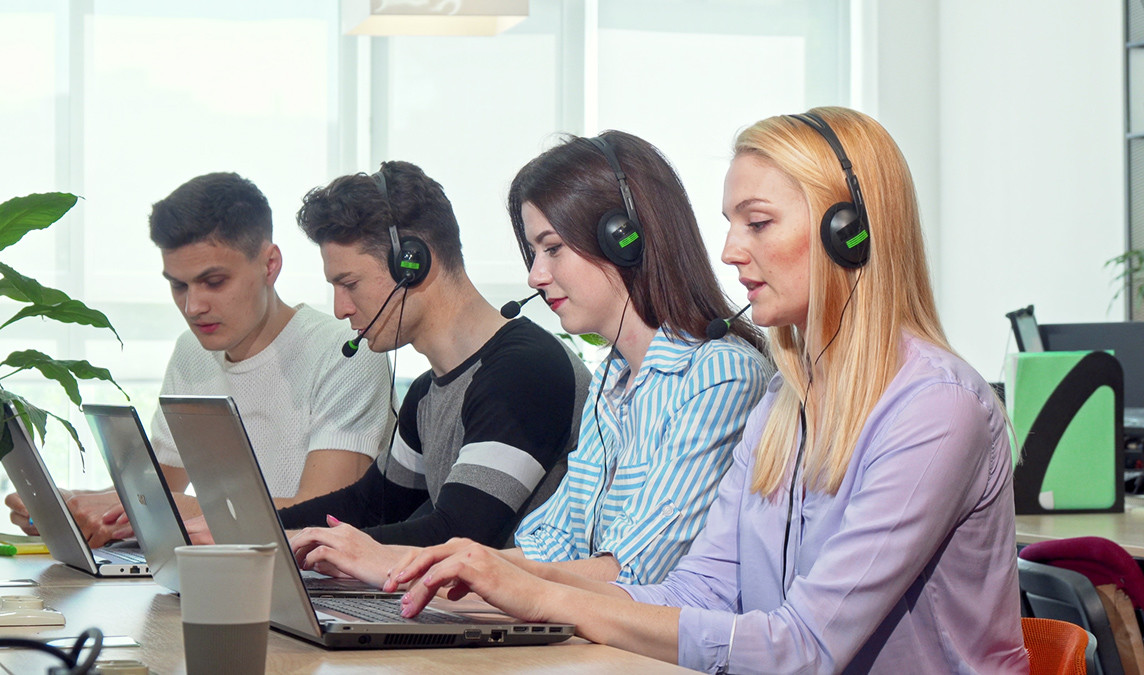 Many banks in Russia have become full-fledged media resources and have even added an Instagram-style 'Stories' feature to their apps. For instance, did you know that the average tip in Russia is 7.5 per cent of the total bill? You can learn such micro-facts and other useful information from banks' Stories feature.

Chat messengers have also migrated from social networks to some Russian banking apps. Initially, they were intended only for sending money to friends but then emoji stickers were added, as well as the option to simply send routine messages.

So far, only one Russian bank - Tinkoff - has launched a voice assistant in its app. However, unlike Siri or Alexa, the local assistant is male and named Oleg (the first name of the bank's founder), and for the time being it can only reply - even to voice inquiries - by text. On request, Oleg can transfer money to other users, buy cinema tickets, book a table in a restaurant or look for shopping discounts. 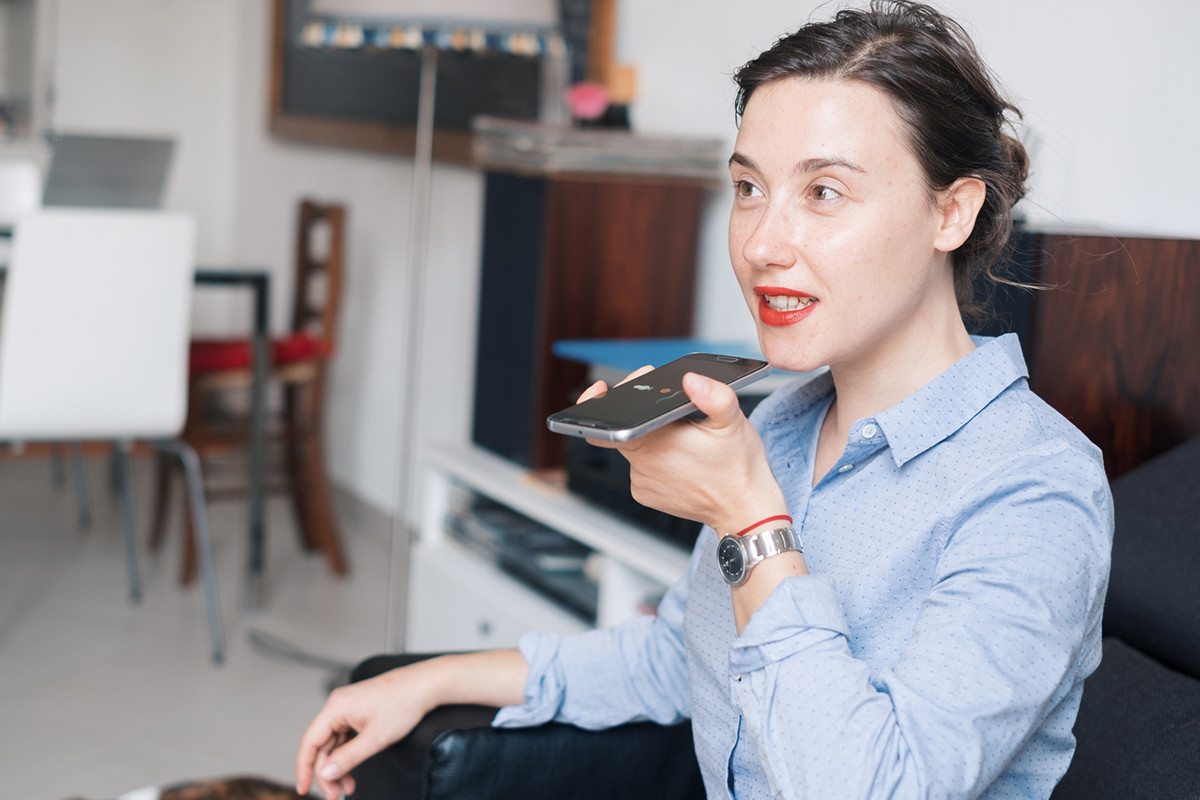 Imagine that in one app a user manage their finances, pay bills, make purchases, correspond with one another and buy insurance. Add to that the option of being able in the same app to make an appointment with a doctor, buy a theater or concert ticket or book home cleaning services. This is what the Super App concept means. So far it has been fully implemented only by the Chinese WeChat app. Super apps are like mini-versions of app stores: They connect additional services with new functionality directly from within the app. On the Russian market, several players have already announced that they have created or are developing their own super apps, including three banks: Sberbank, Tinkoff and VTB.

Super apps won't be limited to providing a wide range of services: In the future, the system will learn to recognize client habits and offer the most personalized services. For example, if a man books a table in a restaurant, the system will offer to book a taxi there or to buy flowers. In addition, an assistant in the app will remind the user about unpaid bills and provide financial consultations and advice.

This service, available at several Russian banks, helps customers to get cash even when they don't have a card to hand, and allows relatives or friends to receive cash without it having to be handed from one person to another.

A QR code is generated directly in the mobile banking app upon request. Then, you need to position the code close to the scanner of an ATM that supports this function, and the terminal will recognize the code and release the cash. 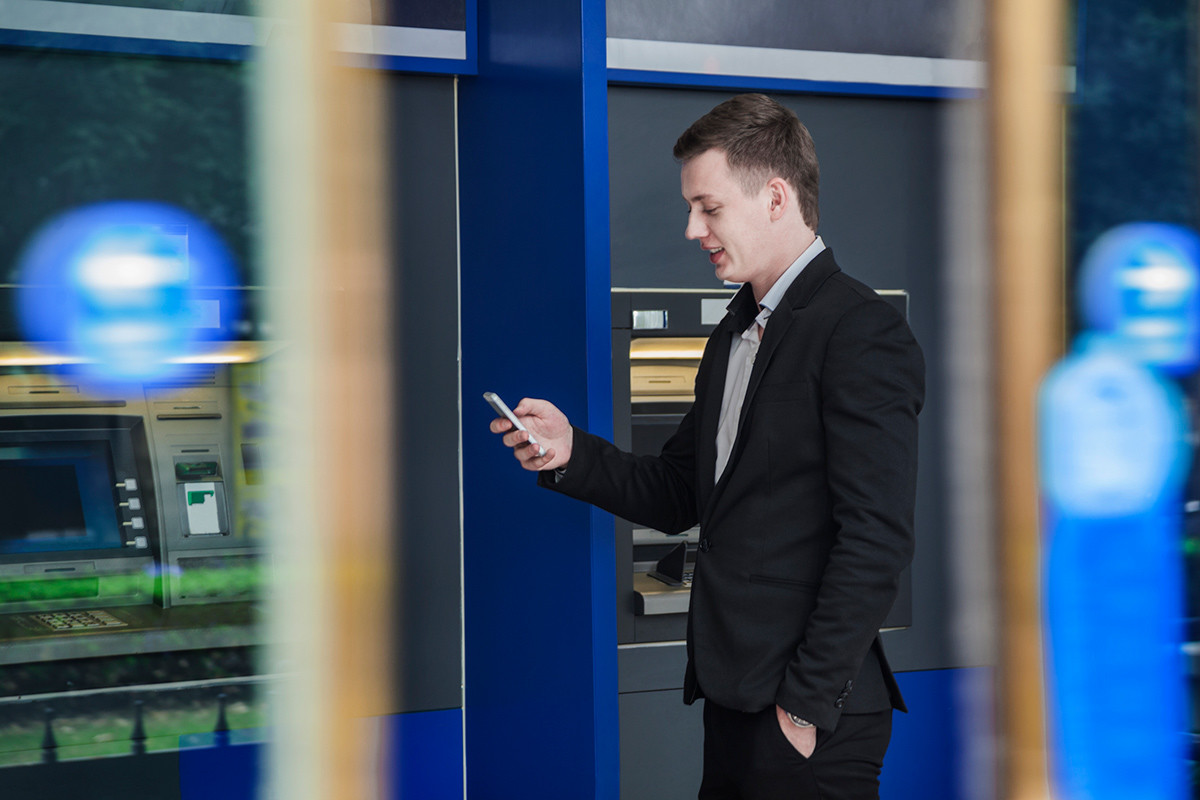 9. Analyzing spending in a banking app

In October 2019, I spent almost 10,000 rubles ($159) on local travel, and I realized that I need to cut back, at least on taxis. In November, my spending on travel halved and I instead used the money that I saved for a holiday.

If I had not analyzed my monthly spending using a banking app, it’s unlikely that I’d thought of trying to save money. The analysis uses a graph showing spending on restaurants, travel, supermarkets, clothes purchases, and etc. The graph shows where most of your money has gone, allowing you to better plan your budget next month.

10. Quick split of the bill and joint purchases

"Card or cash?" - this question from a waiter can lead to arguments among even the closest of friends. One is frantically shaking out small change from their purse while the other is nervously looking at their account in the app, realizing that the last five cocktails were too much.

To deal with similar problems the mobile apps of some Russian banks have introduced the option of splitting the bill in a restaurant or chipping in for a birthday present for a mutual friend. At the click of a button, the system generates a link for payment that can then be forwarded to friends or posted on an office chat messenger. And a built-in calculator will tell you how to split the bill fairly. 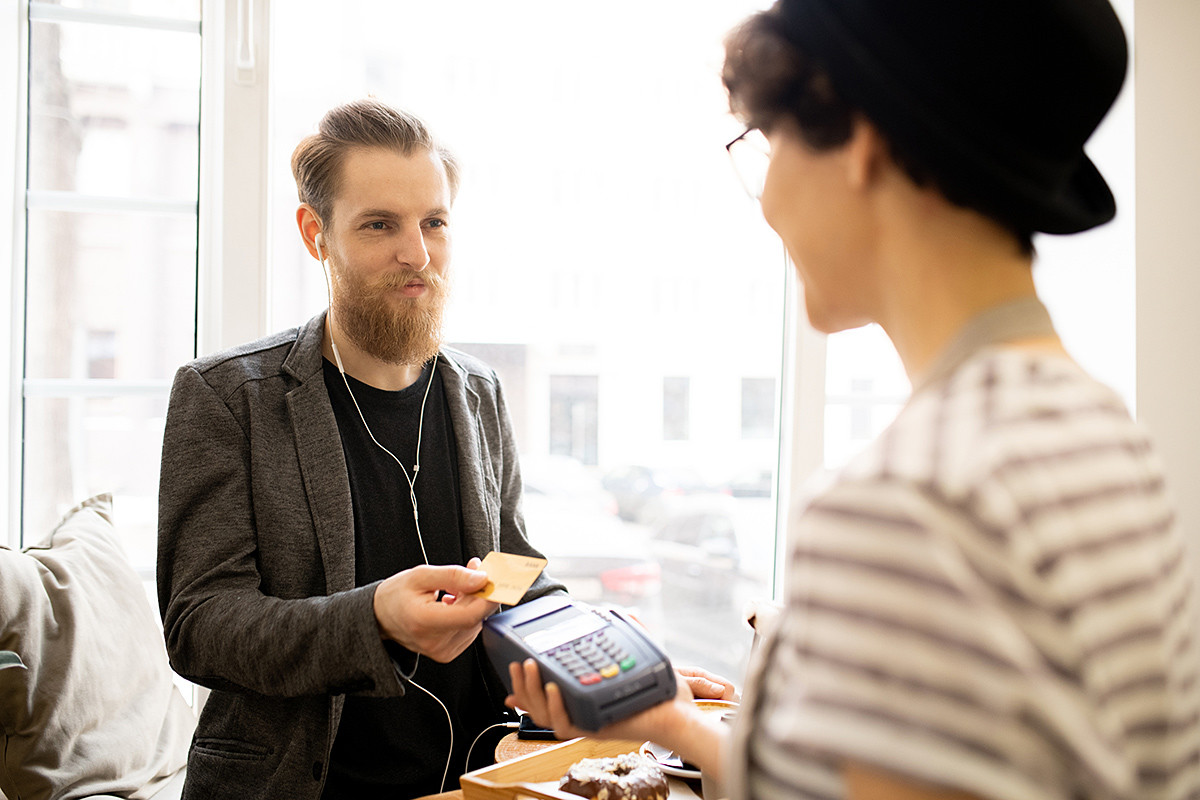