Siberian tiger vs grizzly bear - Who would win? 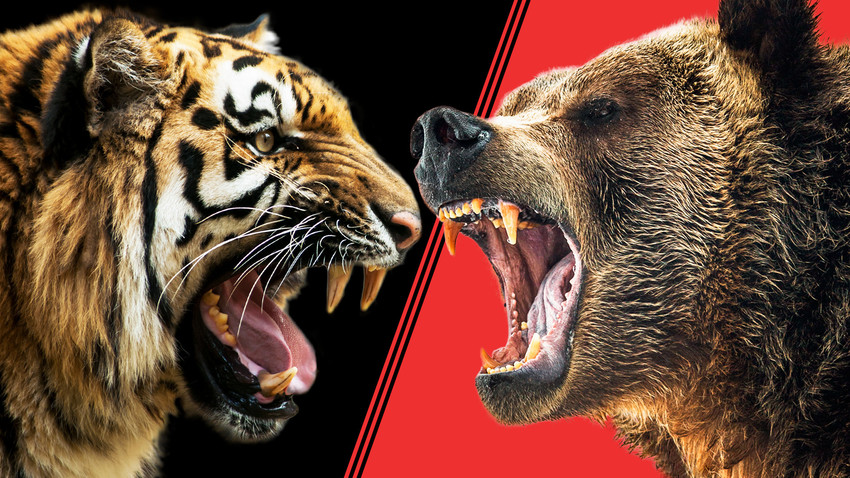 Legion media; Getty Images
Our analysis of this heated online discussion should decide the matter once and for all…

Both beasts are predators at the top of the food chain.

Both the Siberian tiger and the grizzly bear are the undisputed lords of their respective habitats. For the Amur (a.k.a. Siberian) tiger, it is the forests of the southern part of the Russian Far East; for the grizzly, it is predominantly North America. Consequently, these predators would never encounter each other naturally in the wild. 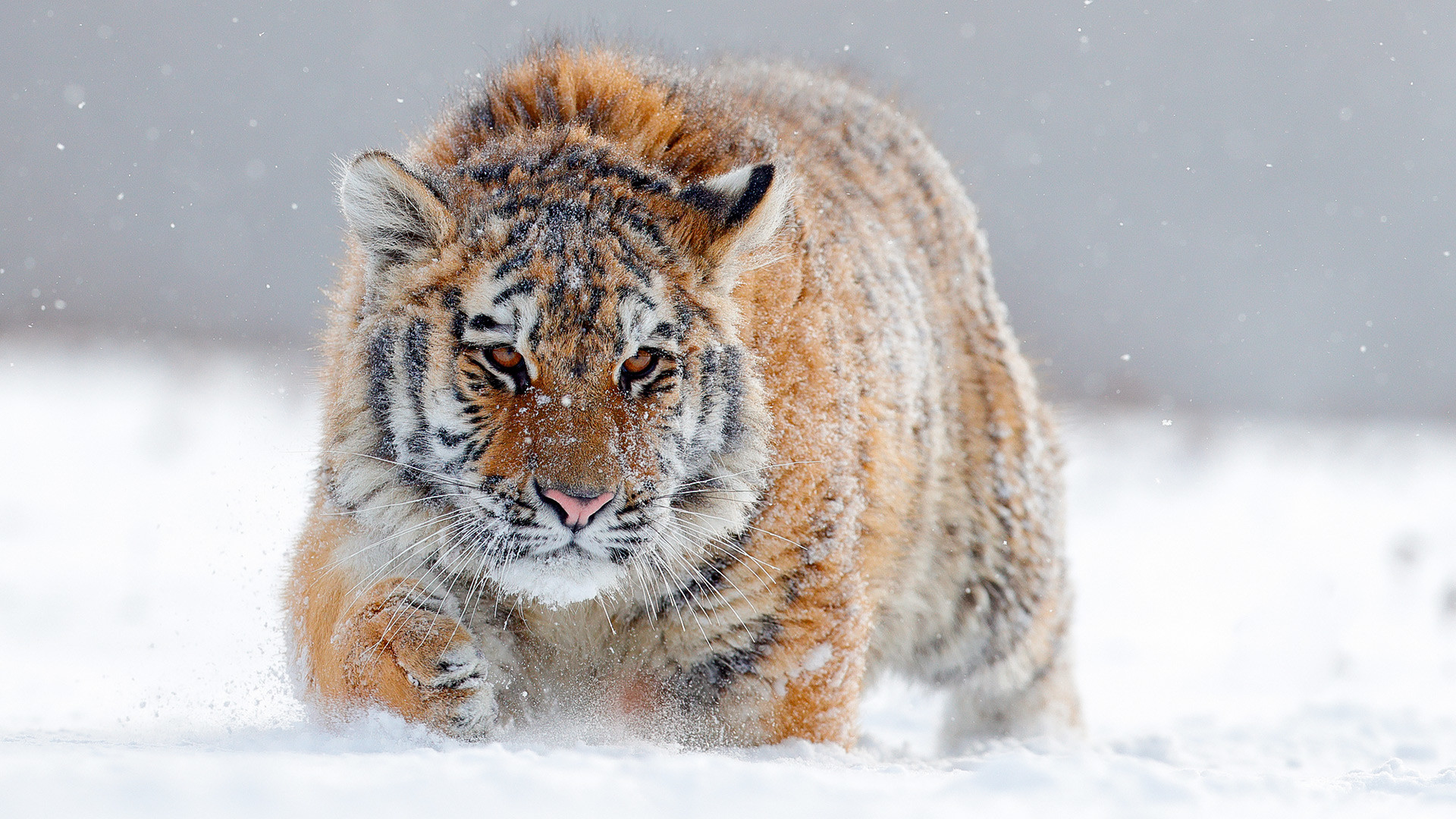 Nevertheless, we can still speculate with some degree of certainty, since two species of bear do live in the habitat of the Siberian tiger — the Himalayan and the brown bear, the latter being related to the North American grizzly, but even more aggressive and predatory. They are not fond of sharing food and territory with each other, but sometimes have to. 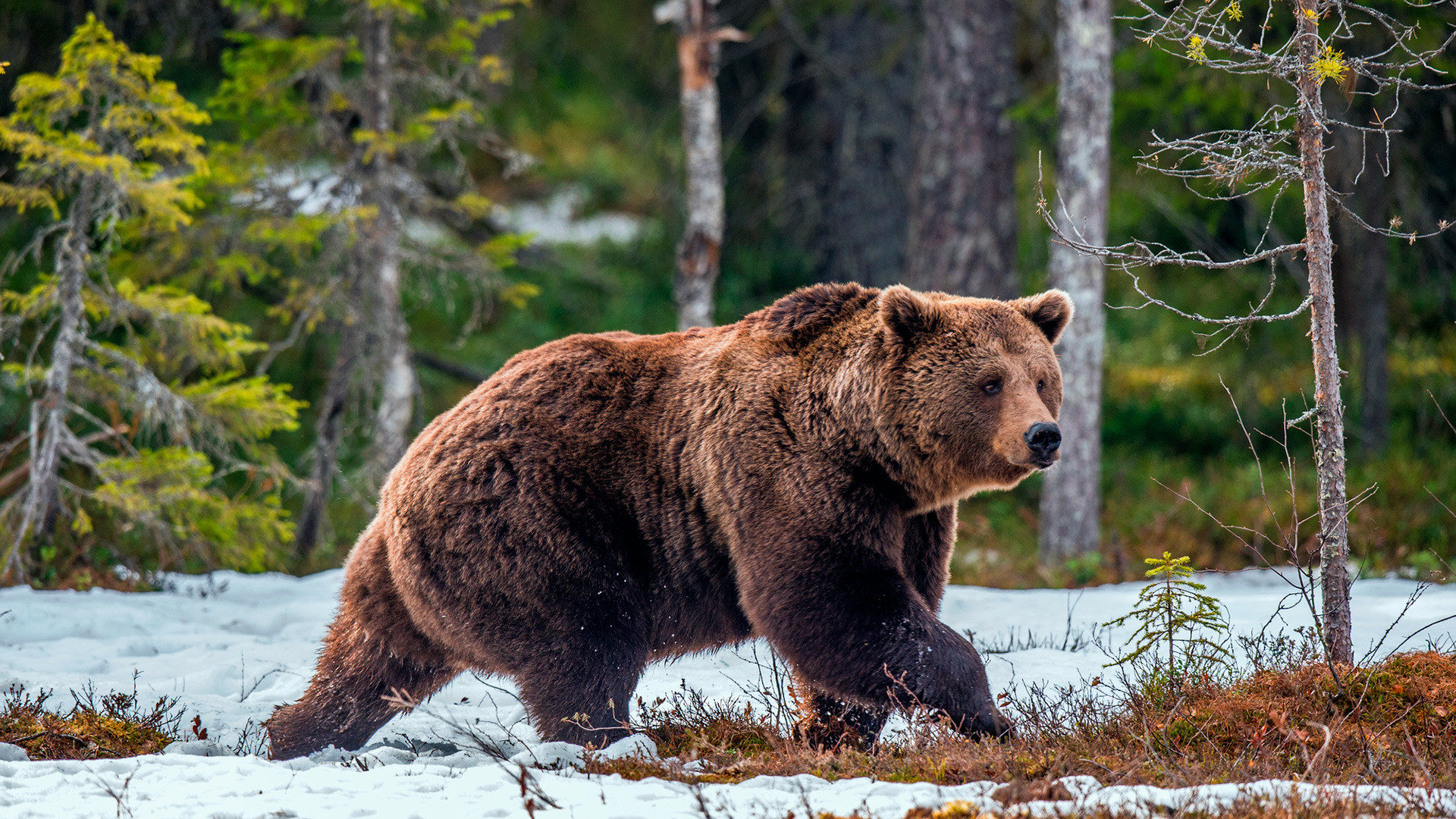 Tigers prey on large animals: deer, moose, wild boars, and, yes, bears. The latter account for 5% of all main courses on the tiger menu (true, they are mostly Himalayan bears). On encountering an Amur tiger, a bear has one option to stay alive. “The only way to escape is to climb a tree,” Sergey Aramilev, biologist and head of the Amur Tiger Center, told Russia Beyond. Tigers are very reluctant tree-climbers. “Sometimes, the tiger simply waits for the bear to come down. Or, if the tree is soft (fir, for example) and the trunk is less than 20 cm in diameter, it can bite through it like a beaver and watch its prey fall to the ground,” says Aramilev . 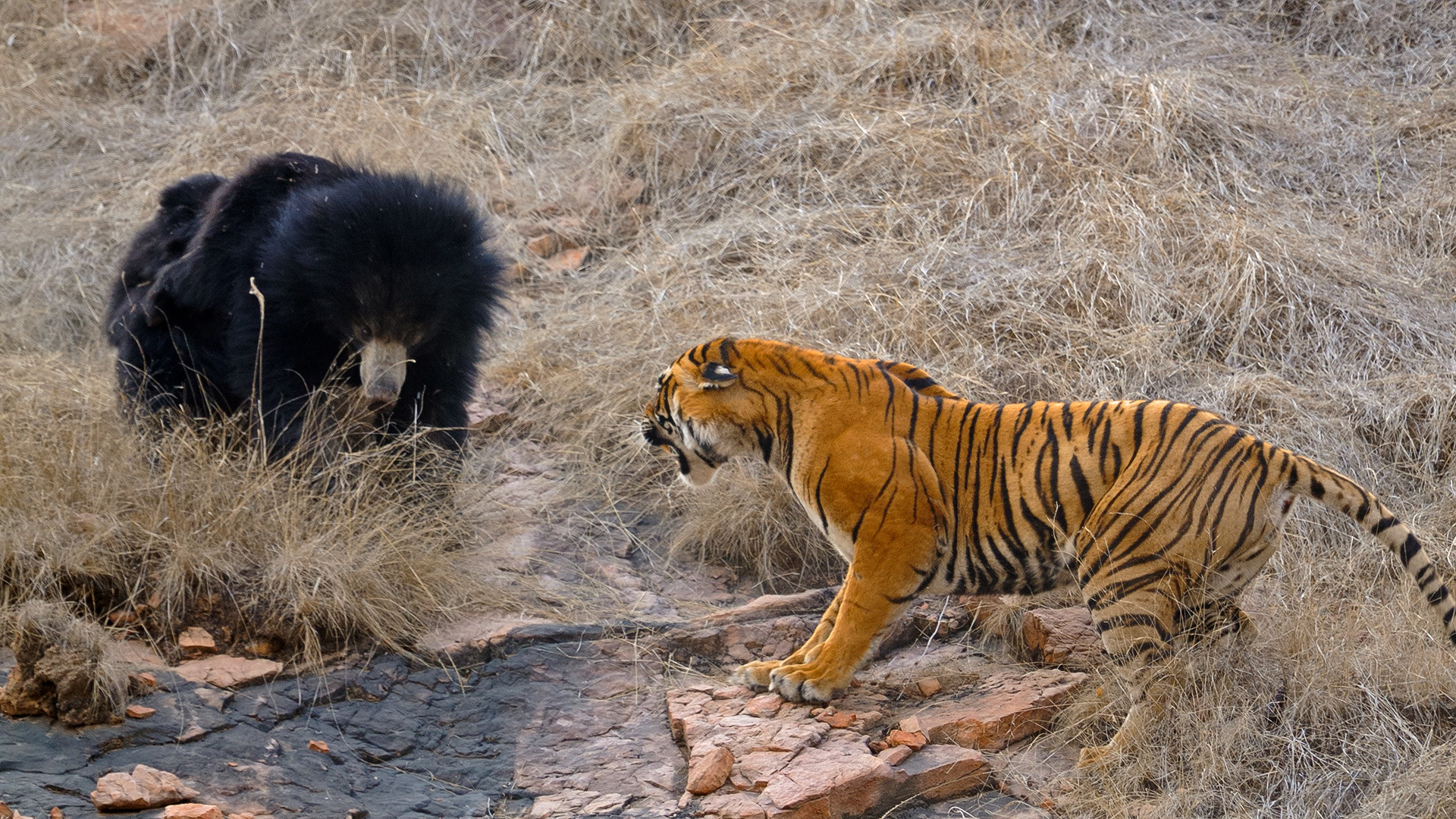 A grizzly, however, would not be such a pushover.

Now for a SWOT analysis.

Both animals are natural killers with plenty of “murder weapons” at their disposal. The Siberian tiger is the largest predatory cat in the world, with a body length of 1.5-2 meters and weighing 180-300 kg. “In strength, it is unrivaled in the Russian Far East,” says  the World Wildlife Fund (WWF). It thinks nothing of running at the average speed of a car on the highway — 80 km/h, and in snow at that. 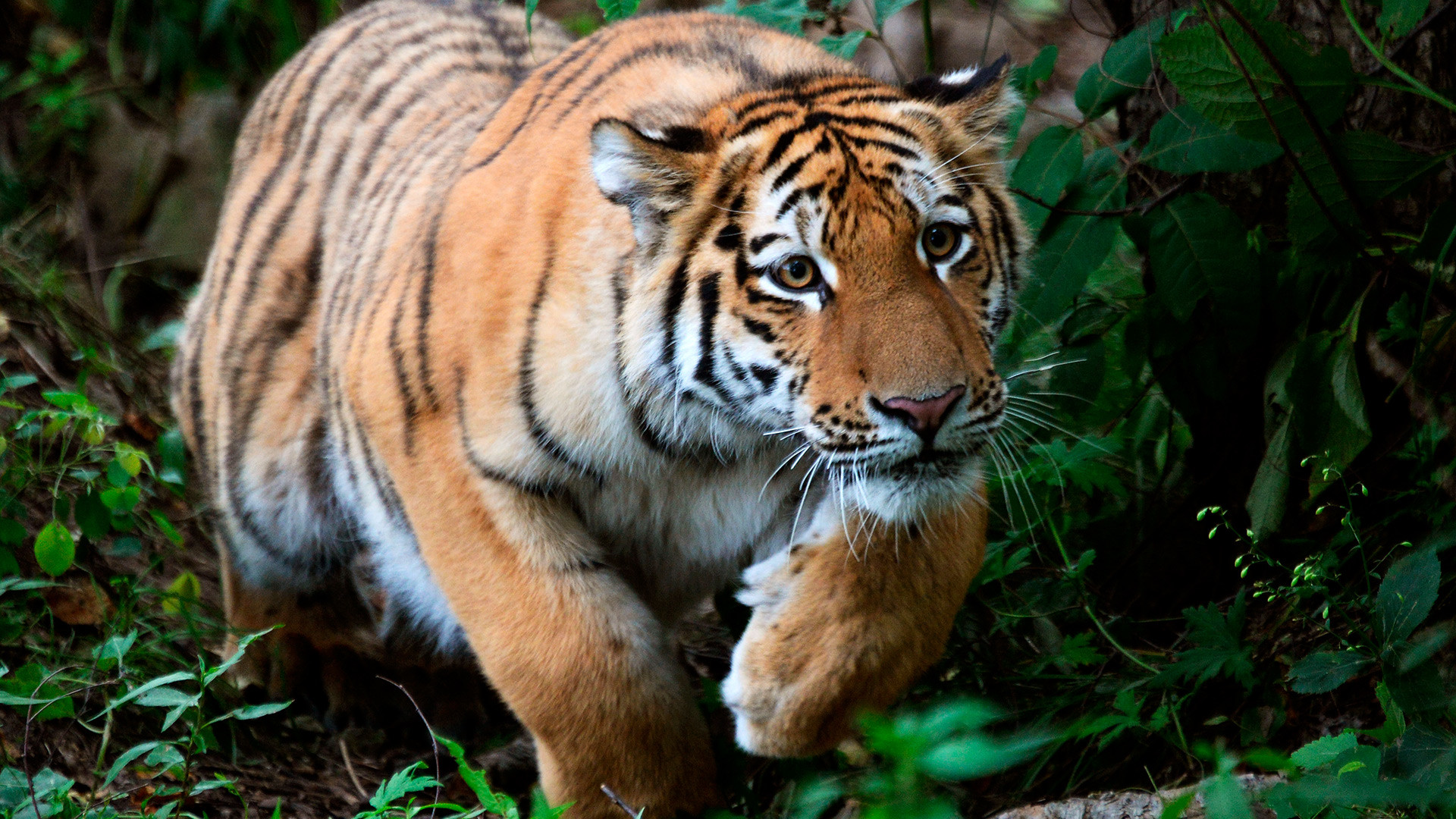 An adult grizzly, like its subspecies, is far more massive and stronger than the Siberian tiger. It can reach 400, 500, sometimes 600 kg in weight. If it were to stand on its hind legs, it would be a walking mountain — 3.3 m! 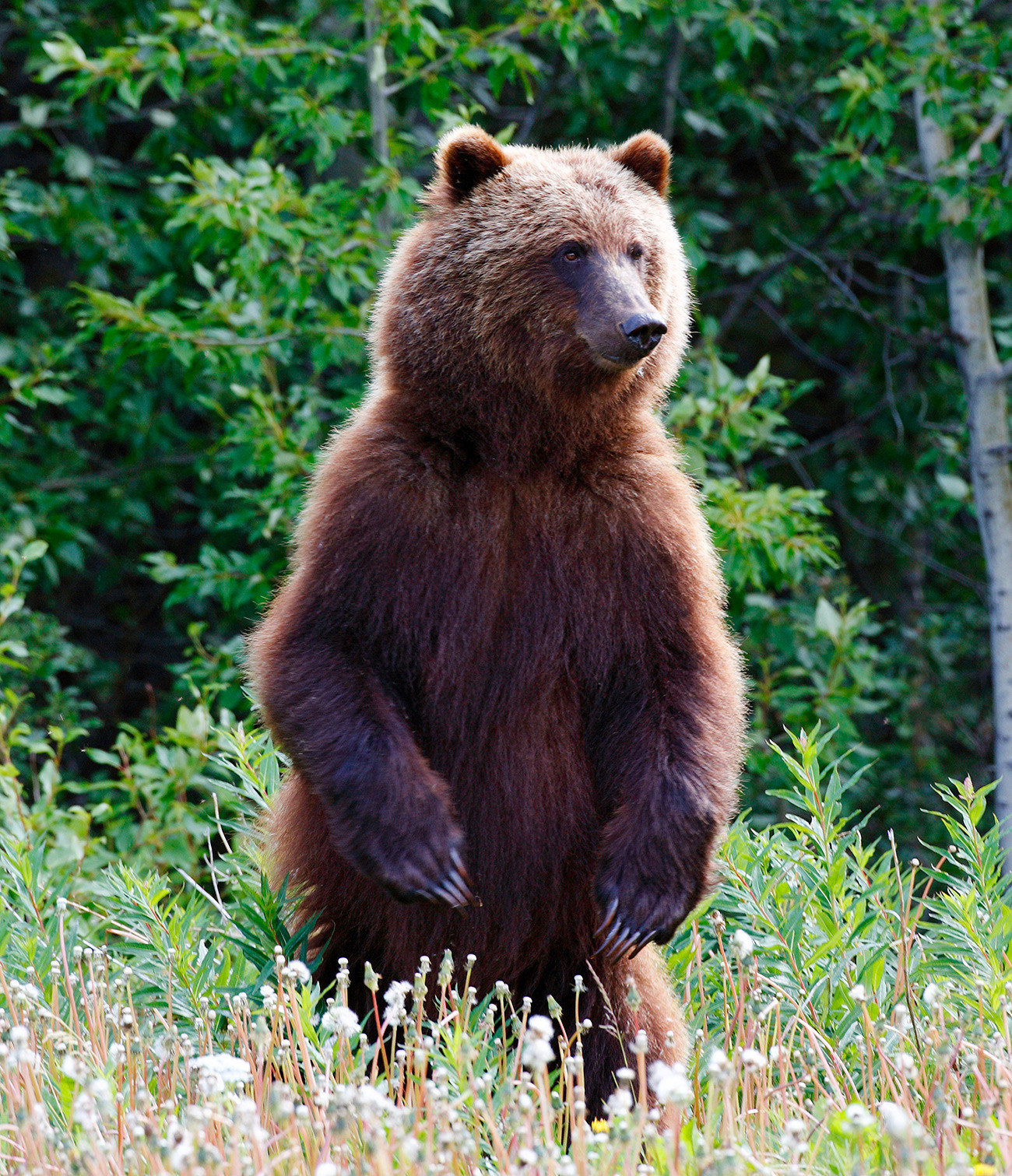 The grizzly’s powerful jaw closes with a force of 1,250 PSI (pounds per square inch), while the tiger’s has a force of 950 PSI, which is still enough to bite through bone. 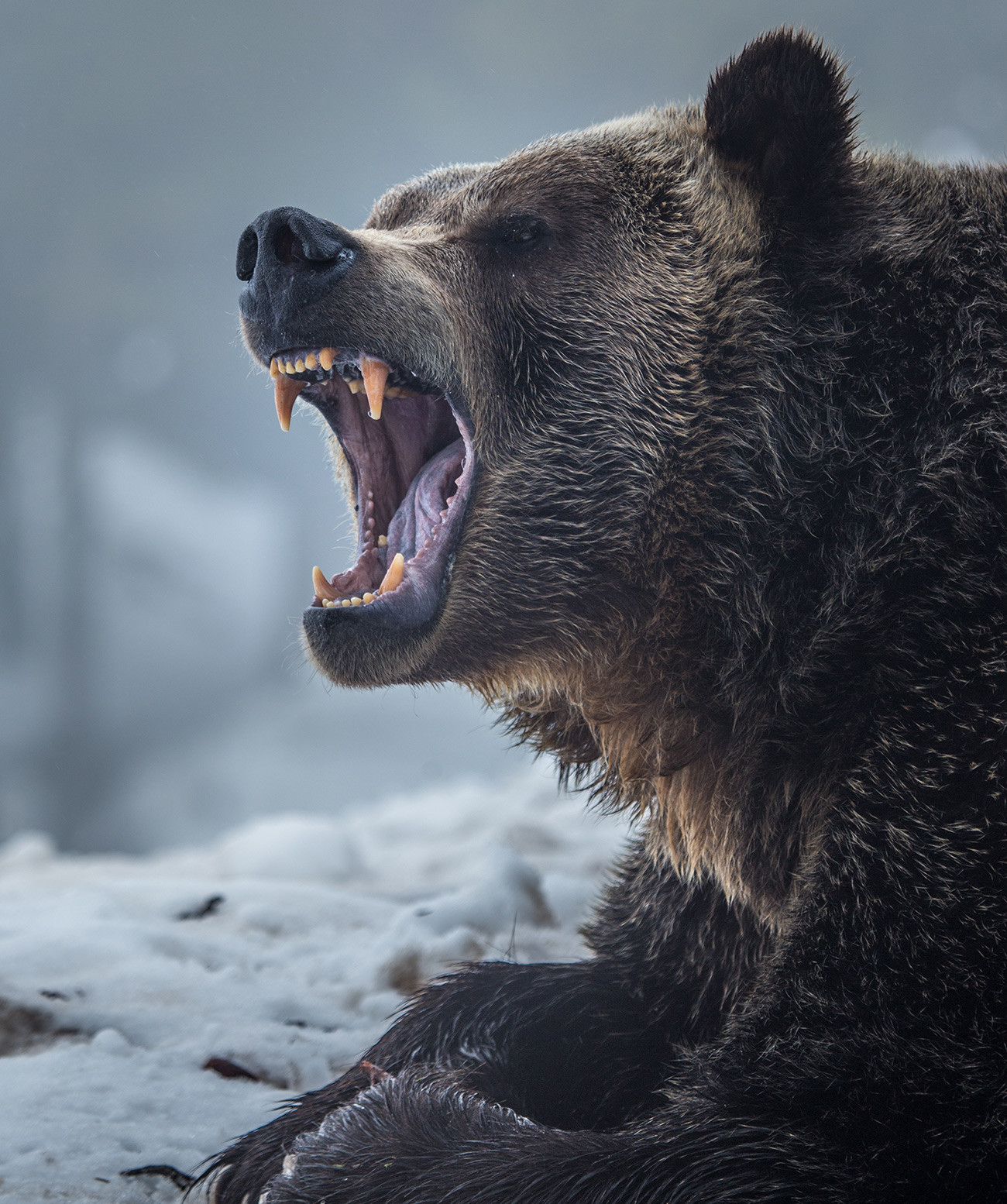 Grizzly bear has a powerful jaw.

But the tiger’s teeth are longer and thinner, leaving deeper wounds that bleed longer. 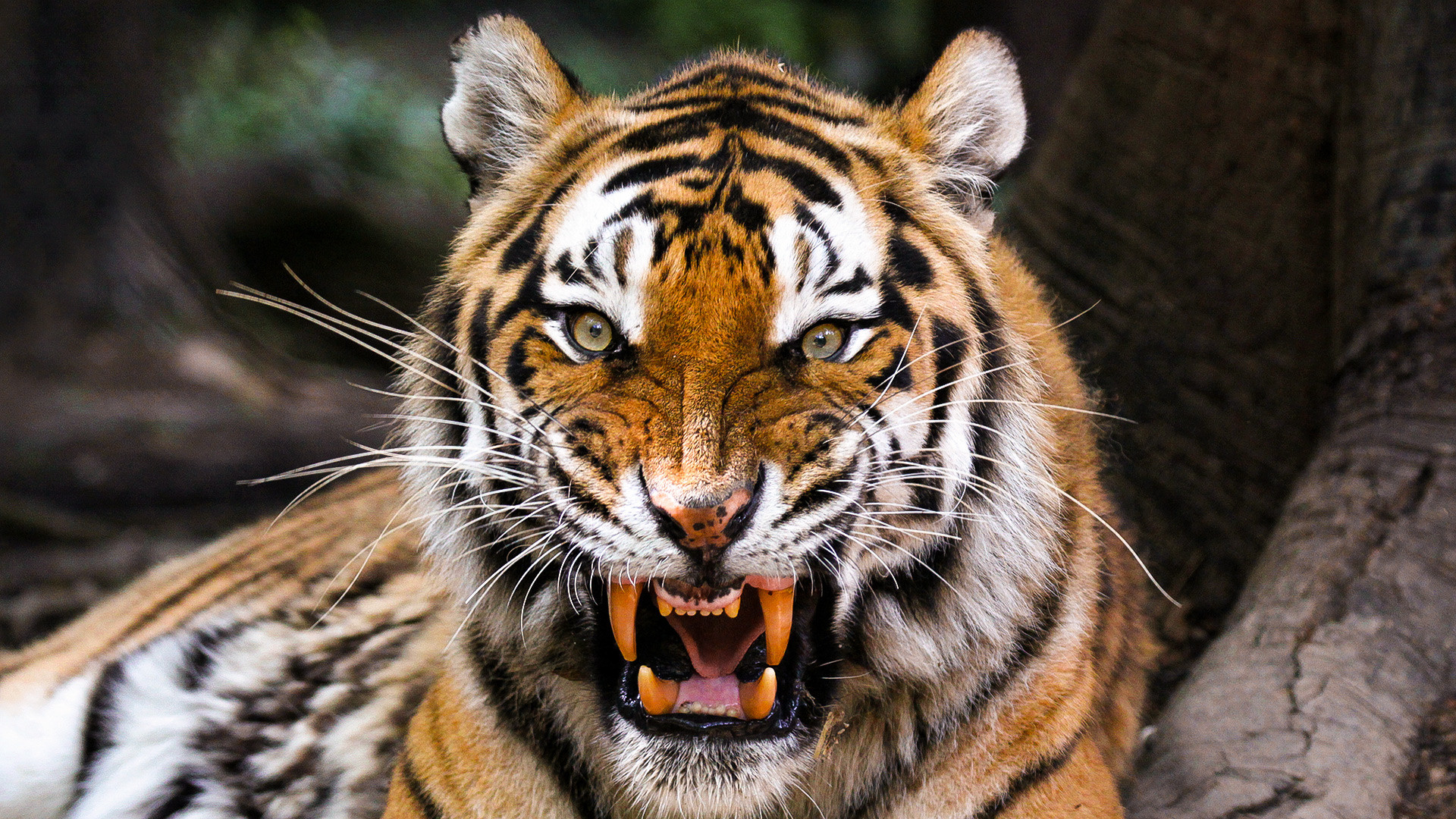 This is an “important source of trauma” in the grizzly’s arsenal. Its claws are longer and sharper than those of a lion or polar bear, and can tear an enemy to shreds. 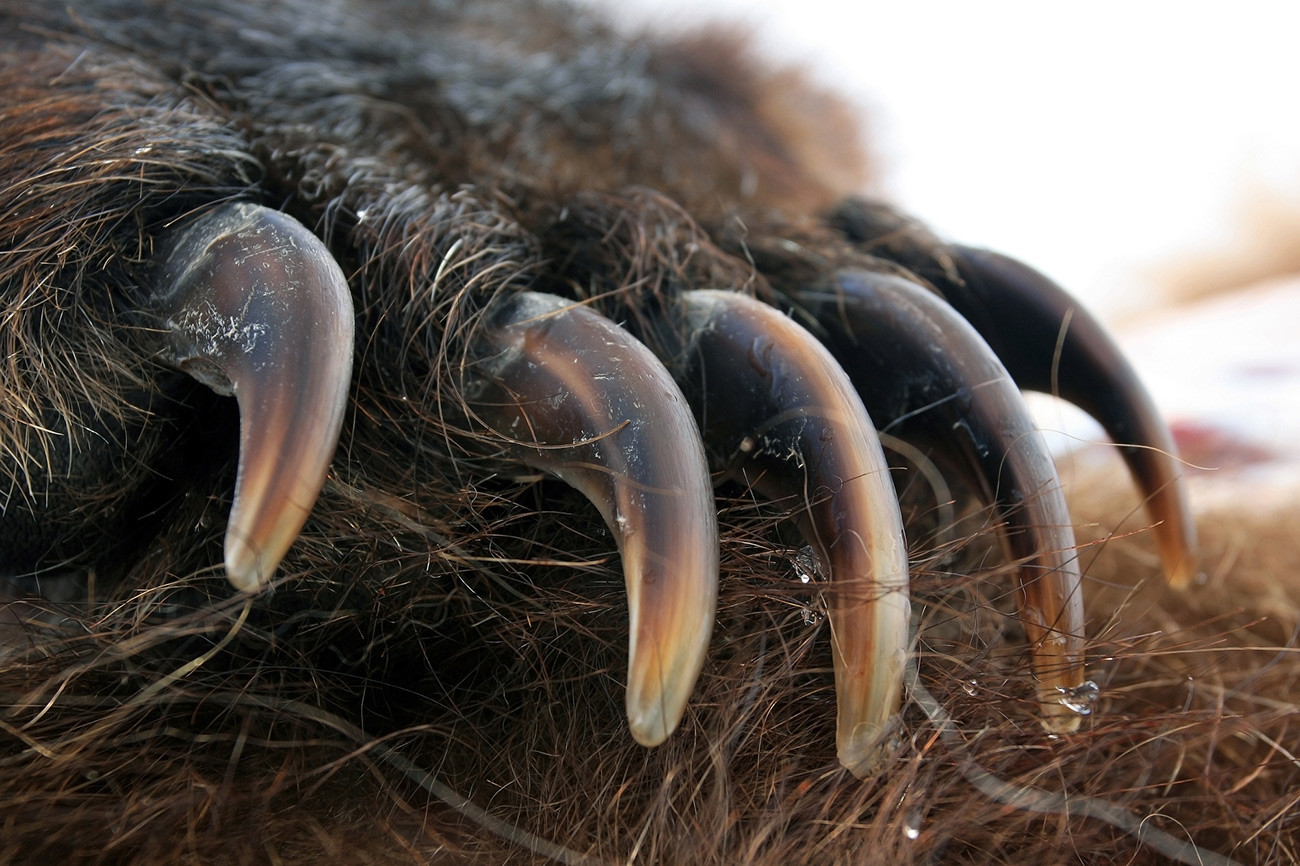 They are not as sharp as the Siberian tiger’s, but factor in the crushing power of the blow itself, and that could be the end of it. Such a blow could simply snap a tiger in two. “The force of impact of the bear’s paws is so great that it could knock a 150-kg adult boar tens of meters through the air,” say wilderness medical experts.

They can move without making a sound, and ambush and attack from the most advantageous position from their perspective, and at the most unpredictable moment. “We have wandered about in its habitat for 25 years, getting close to it on occasion, and in all that time, we have heard a tiger roar fewer than five times. But once is enough, for its thunder chills the blood in one’s veins and leaves an impression that last a lifetime,” recall biologists Yuri Dunishchenko and Alexander Kulikov.

Bears are resistant to wounds

Whereas the tiger clearly has the upper paw in terms of speed and agility, bears are the armored tanks of the animal world. All its arteries and trachea are protected by solid fat and muscle, and lie very deep. Bears have been known to continue fighting even when bullets have penetrated their lungs and liver.

So, now for the most crucial factor.

Without a doubt, the first thing a threatened bear will do is to rear up to look as big as possible. Like in this clip:

It could be the last thing it ever does, or, preferably, it might just persuade the opposition to seek an alternative lunch.

The tiger has one aim in mind — to bite through the neck bone. All tiger experts highlight this as the most common kill technique: “It deftly makes its approach and with a single bite, the victim is rendered motionless. Do what you will, the victim is not going to recover.” But getting hold of the bear’s neck is not easy given the amount of fat and muscle, which is what makes this whole discussion never-ending — everything depends on the individual tiger and the individual bear.

“If a very large male bear fights a tigress or a small male, then the chances of victory will be equal or even slightly in favor of the bear,” says Aramilev.

But imagine two heavyweight rivals. Who would you put your money on? Naturalists, for their part, would back the tiger. But only for one reason — it is accustomed to killing.

“It’s all about the difference in feeding patterns. Tigers feed only on meat, and only on the meat of animals they kill, which is why they have more developed hunting skills. It knows exactly where to bite in order to kill its victim, how and where to strike with its paw,” explains Aramilev. Bears, meanwhile, are mainly vegetarian (plant food and fish) and scavenging; they do not hunt regularly. “It could be said that bears have forgotten where to bite, that is, lost the requisite hunting skills,” he notes.

Timofey Bazhenov, zoologist and presenter of the TV program Dikiy Mir (Wild World), offers this opinion: “I am often asked: If a tiger met a brown bear in the taiga, who would win? As a rule, the tiger!”