10 things you should never do on Russian trains 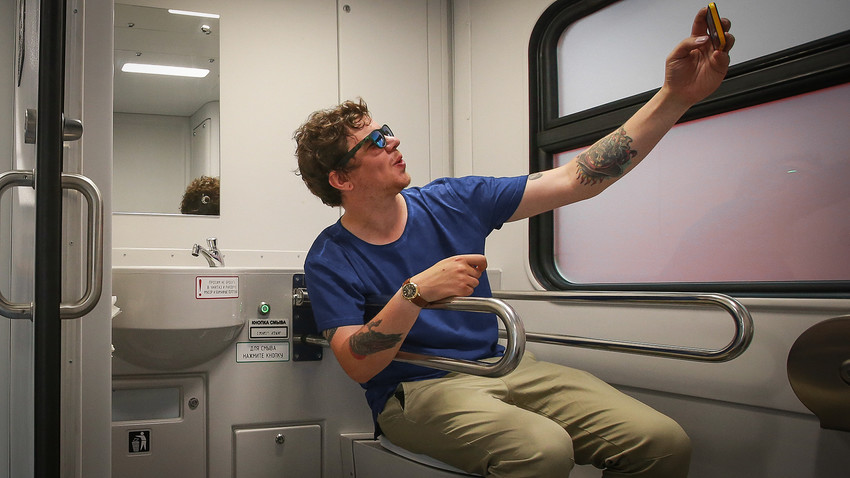 Sergei Fadeichev/TASS
Do you like eating instant noodles when travelling on a train at night? Keep in mind then that there is a special cauldron waiting in hell for people like you!

Are you planning to spend a week travelling on the Trans-Siberian Railway or at least make the overnight journey from St. Petersburg to Moscow? Then you should know that buying a ticket is far from the most difficult part of the journey. There are unwritten rules for those travelling by train in Russia that should always be observed. 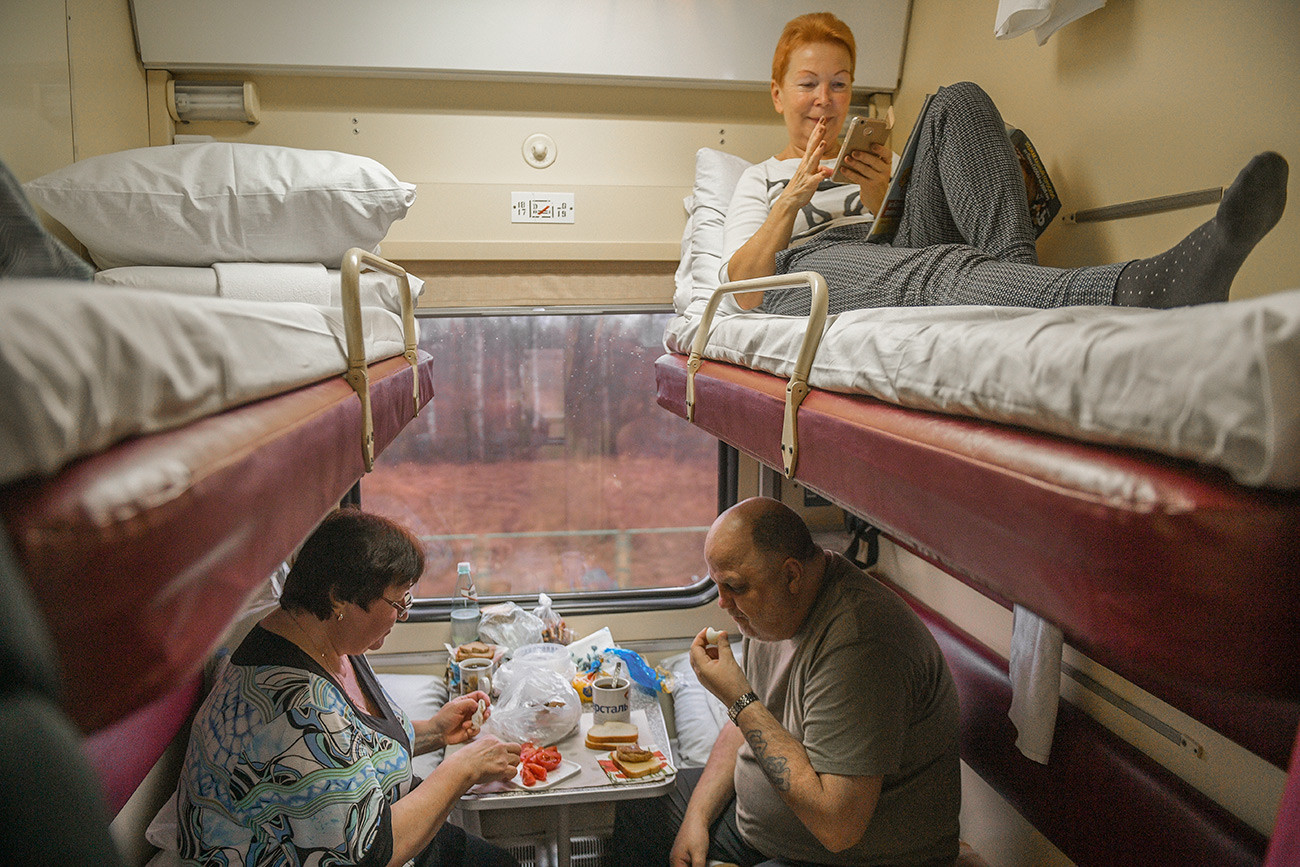 Whether you’re in a second-class four-bunk coupé compartment or a third-class open-plan platzkart couchette car, there is always a small table by the lower bunk bed. Usually it is used by travellers for unwrapping their homemade food they have brought with them for the journey. But there is an injustice: If you’ve bought a ticket for a lower bunk bed, you get to be near the table. But if your ticket is for an upper bunk bed, you don’t. Admittedly, the tickets do not specify who is entitled to use the table, so passengers should be polite and offer a seat at the table to people who have an upper bunk bed ticket.

9. Getting dressed/changed in front of others 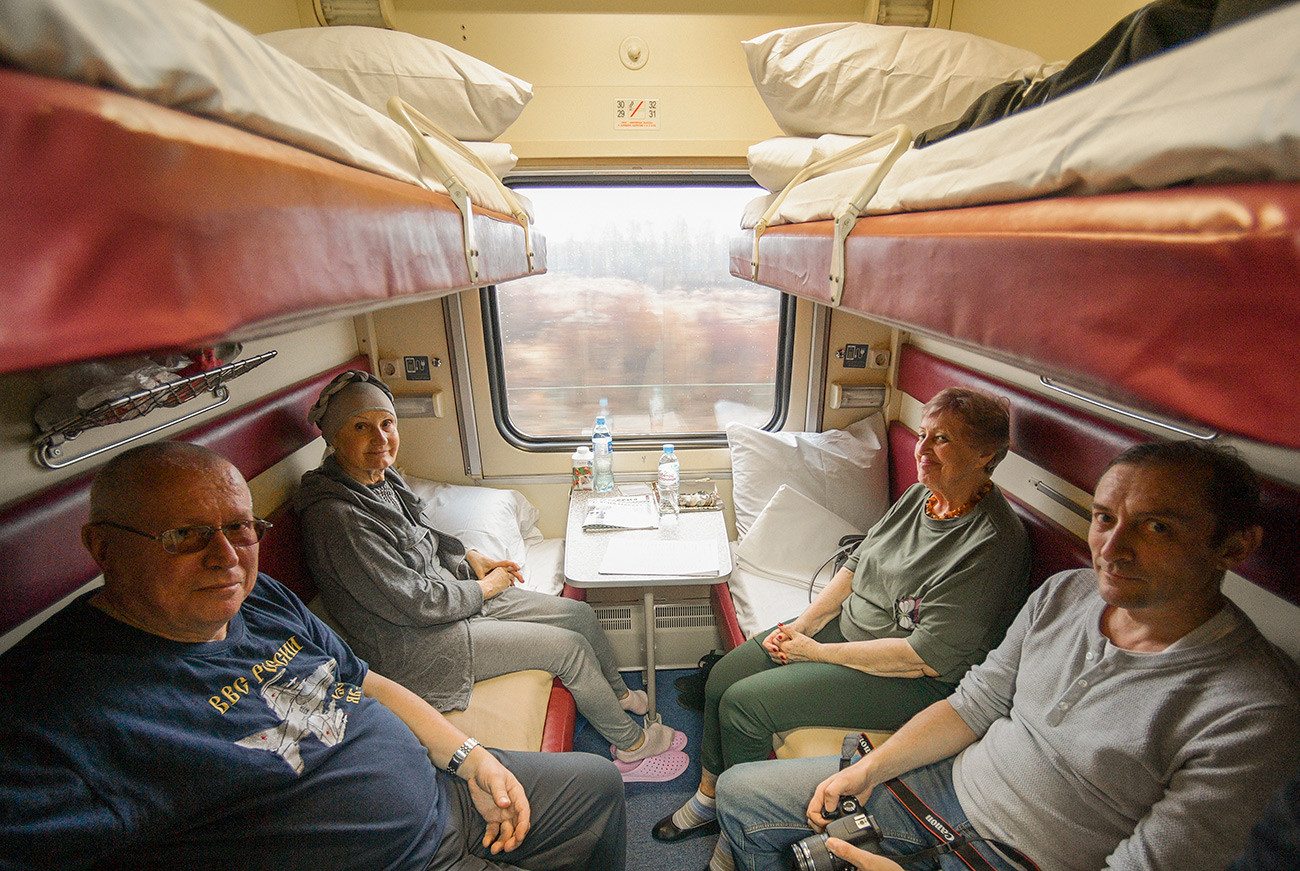 The first thing passengers do when they get on a train is change into casual clothes. Some people simply hang a sheet in the compartment (or awkwardly ask all the other passengers to leave the compartment). But, at the very least, this is not polite towards your travelling companions. Especially if they have already made their tea and unpacked their sandwiches. Some experienced travellers have mastered the skill of discreetly changing under a blanket, but, if you haven't attained this level of sophistication yet, head to the small “vestibule” - the open space at the end of the car - or, even better, the bathroom.

8. Occupying the bathroom for a long time 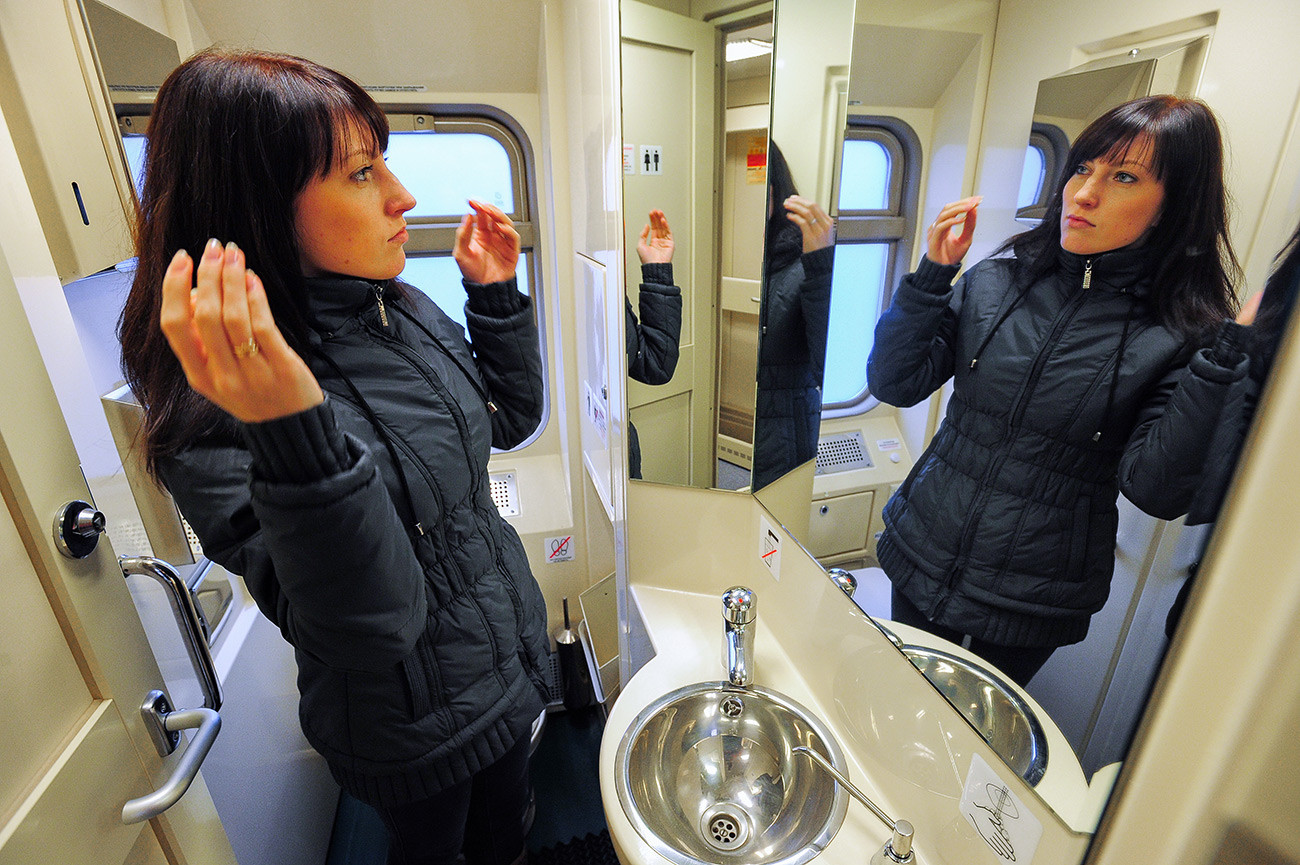 The biggest lines form in overnight trains prior to arrival at the final destination, because in the morning, everyone wants to wash up, brush their teeth and use the toilet. If there is a shower in your train car, you should also think about the other passengers and limit your time under the hot water. 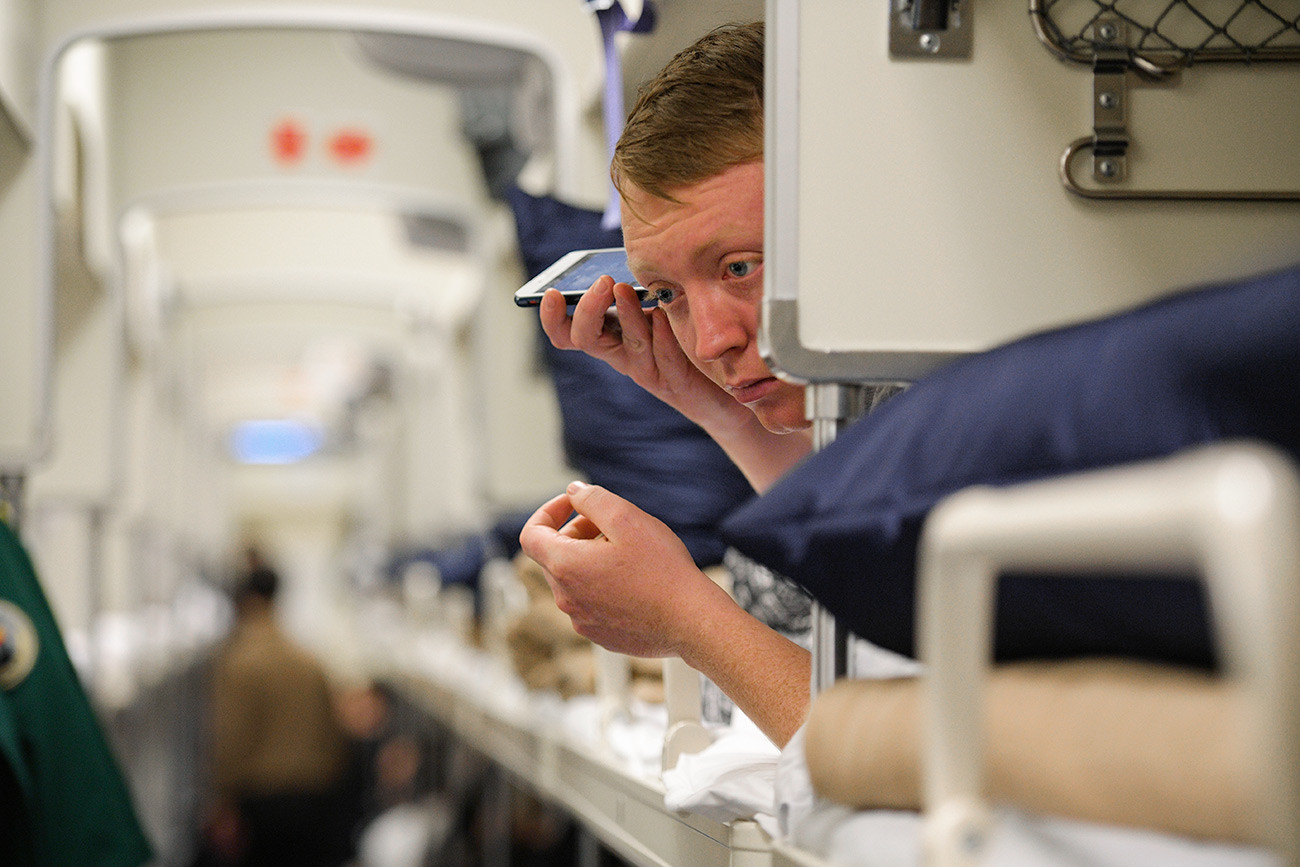 It goes without saying that a long journey can be boring and you may want to talk to someone. But speaking loudly on the phone is not the best option. After all, the other passengers don't have to know what has happened to John's grandmother in California or why this year the potatoes in Idaho are not as large as last year. So, it’s better to talk on the phone in the vestibule at the end of the train car, while, inside the coupé, try to have a chat with your fellow travellers instead: Random travelling companions often turn out to be very interesting conversationalists. 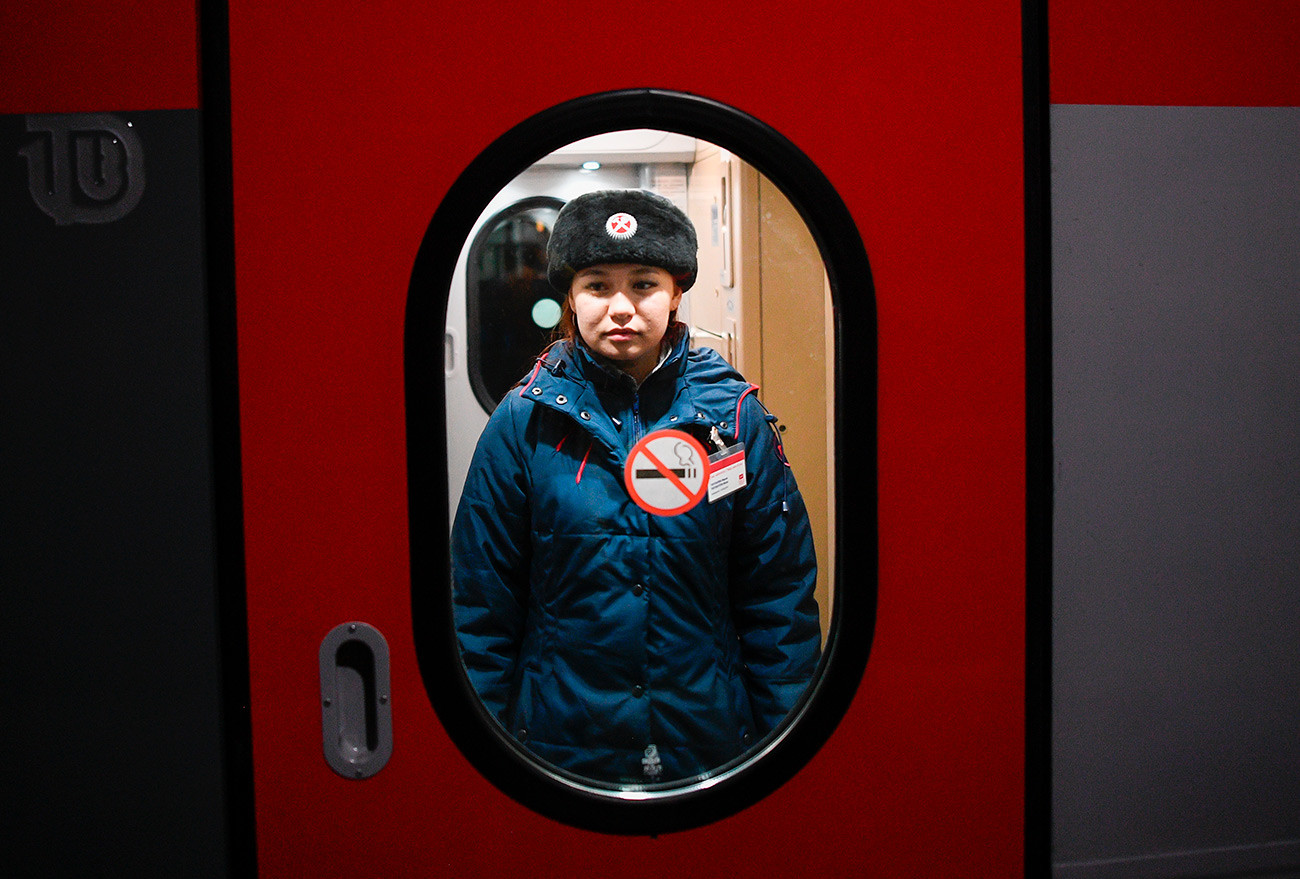 Yes, smoking was banned on trains in Russia a few years ago, so now you'll have to wait until the train gets to a stop, and even then, it’s not guaranteed there will be a smoking area on the platform. And for smoking in non-designated areas, a passenger can end up with a fine of up to 1,500 rubles ($25). Perhaps it is a good time to give up the harmful habit? 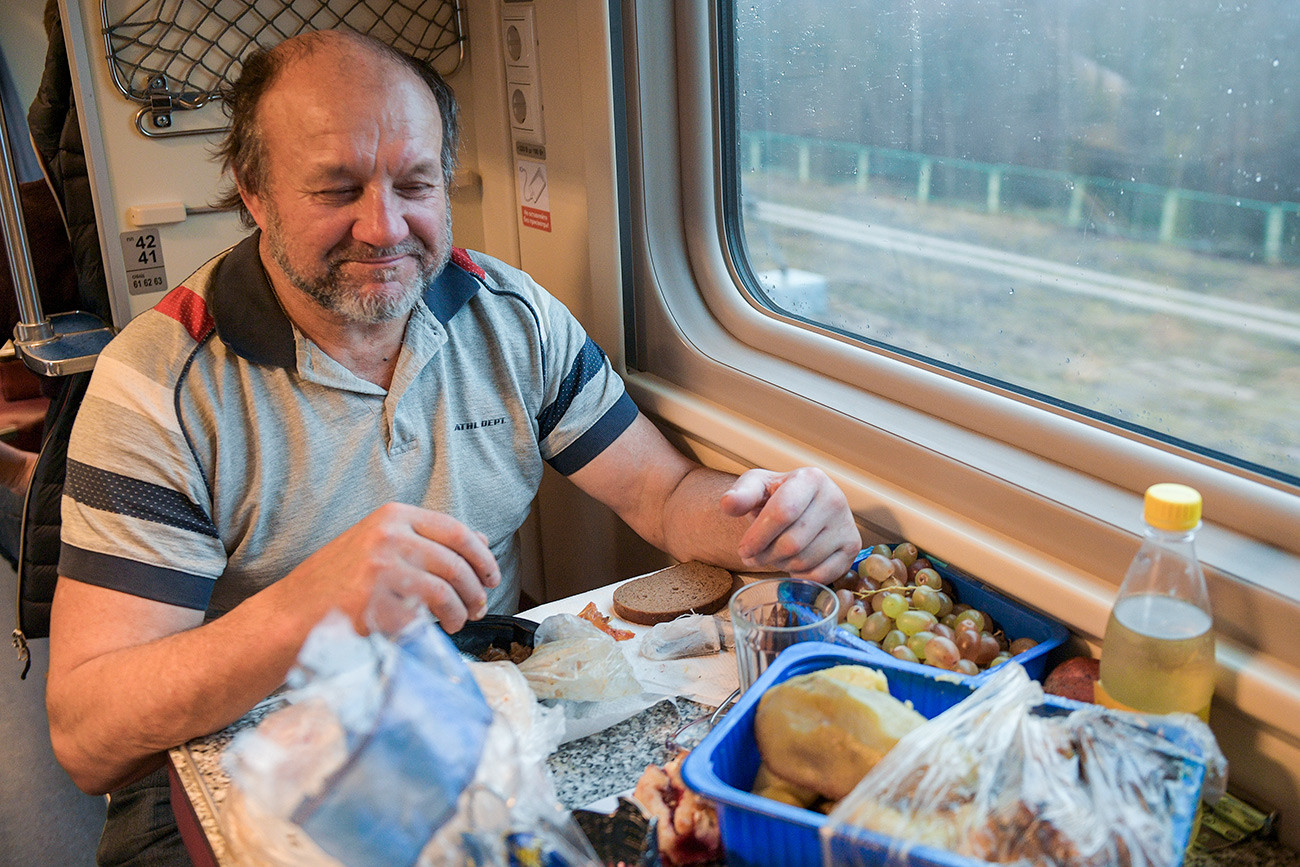 Even in winter it is VERY warm on Russian trains. Just imagine what will happen to your chicken if you leave it out on the table overnight? Try to eat meat and dairy products on the first day, and for a journey lasting several days stock up on nuts and crackers, or go to the restaurant car. 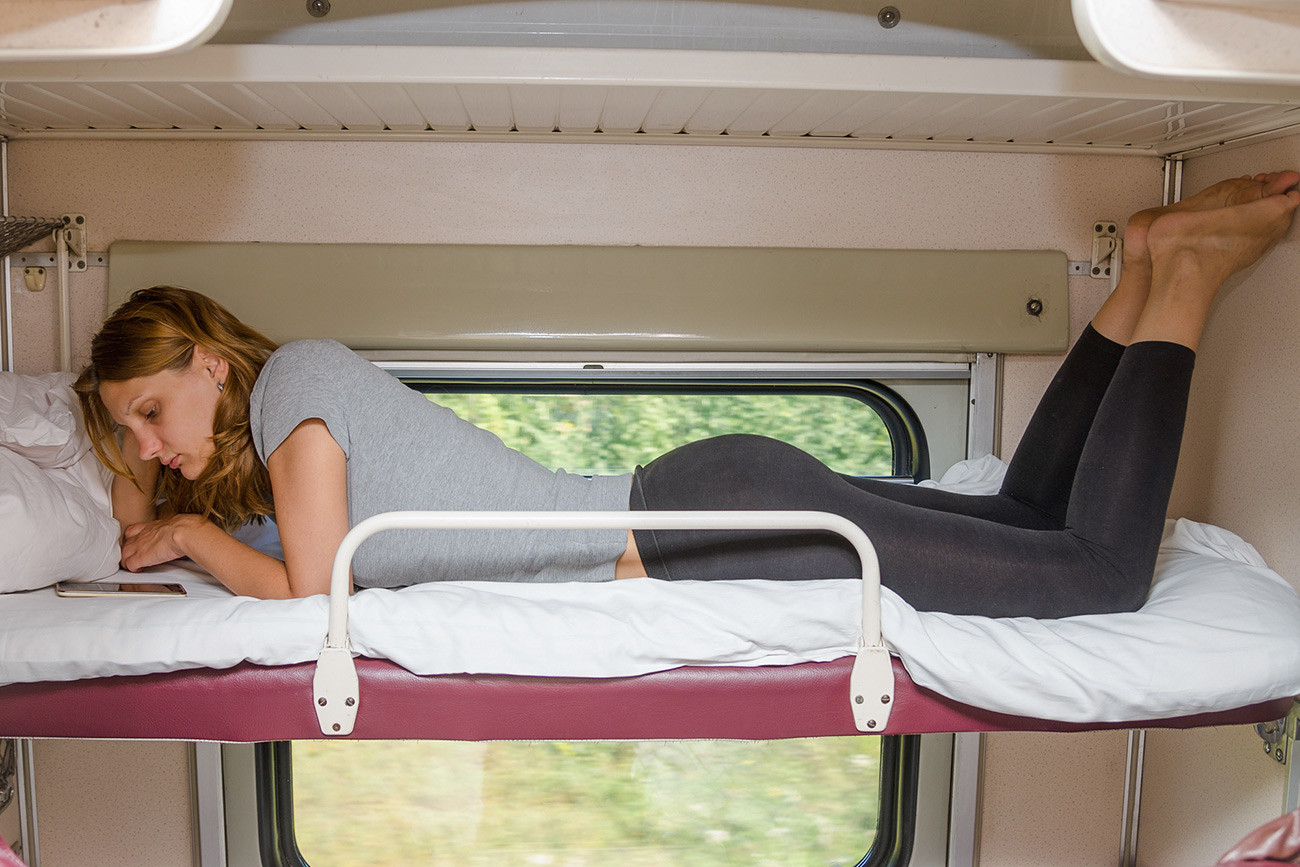 If you travel by train for more than one day in the summer, don't take seats 9-12 and 21-24. The thing is, these seats are in compartments with emergency exit windows - in other words, you won't be able to open the window and will suffer from the lack of fresh air. Even if you have air conditioning in the train, it will only start working when the train is moving over 30 km/h (and if the stops are frequent - for example on a train travelling along the Black Sea coast - the speed will be low, due to the numerous stops). It’s easy to avoid these seats when buying tickets online - as a rule, they are in the third and sixth compartments, counting from the attendant's compartment (Check out our guide for more details on how to book a train journey).

Also, don't book seats on a lower bunk bed at the end of the train car if you are tall. It usually has a partition at the end that will make it uncomfortable for you. 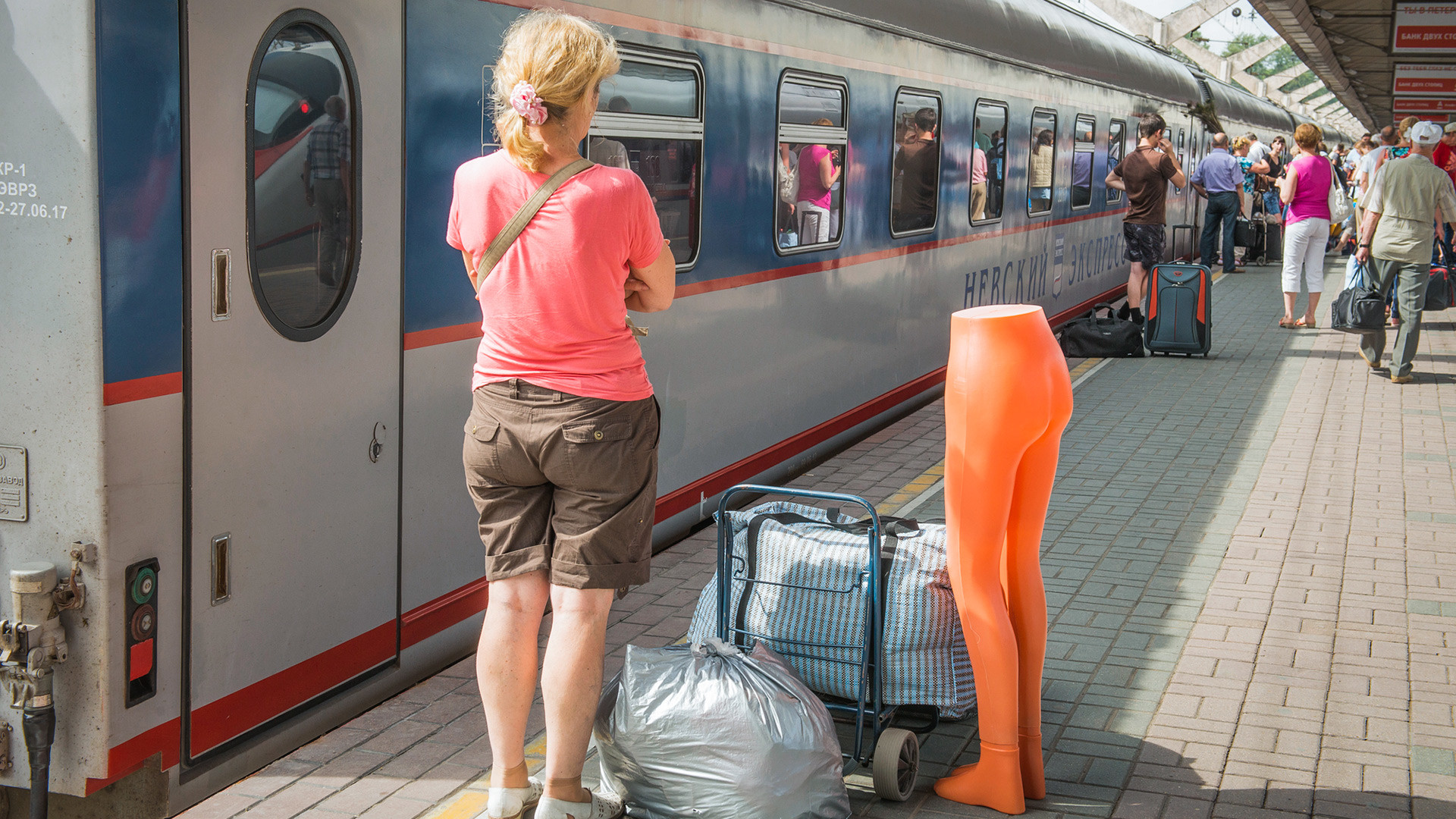 Locals may ask you to take a parcel for a relative in the city you are travelling to. Naturally, never do this if you don't know what exactly you will be carrying.

2. Arguing with the train car attendant 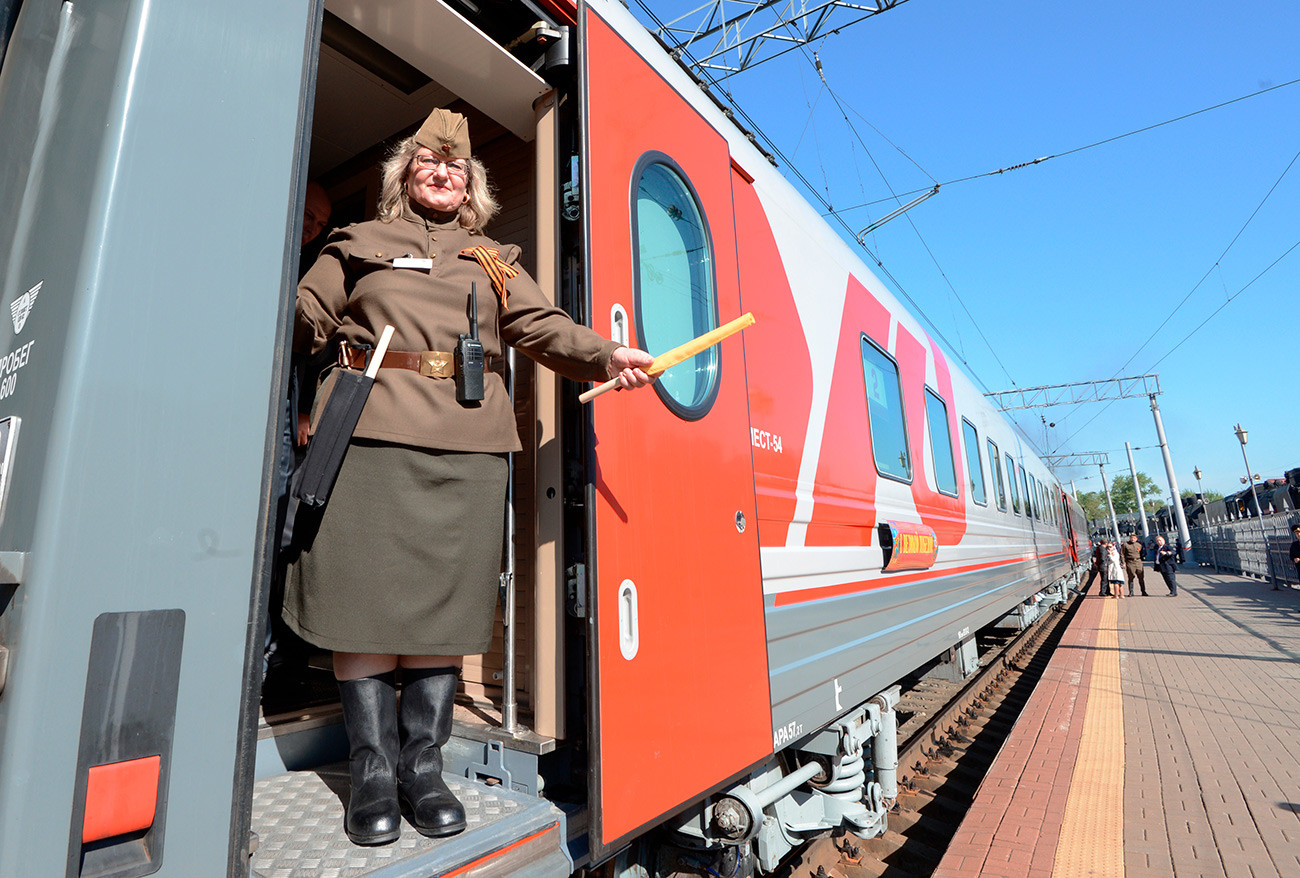 Train car attendants don't just check tickets and sell tea. In the train car, they are in charge and deal with all issues that may arise. They can provide medical assistance, wake you up before the right stop or even find a better category seat for you. Also, in new train cars, attendants have a mini-fridge in their compartment, so if you behave well you can ask them to put your perishable food there. 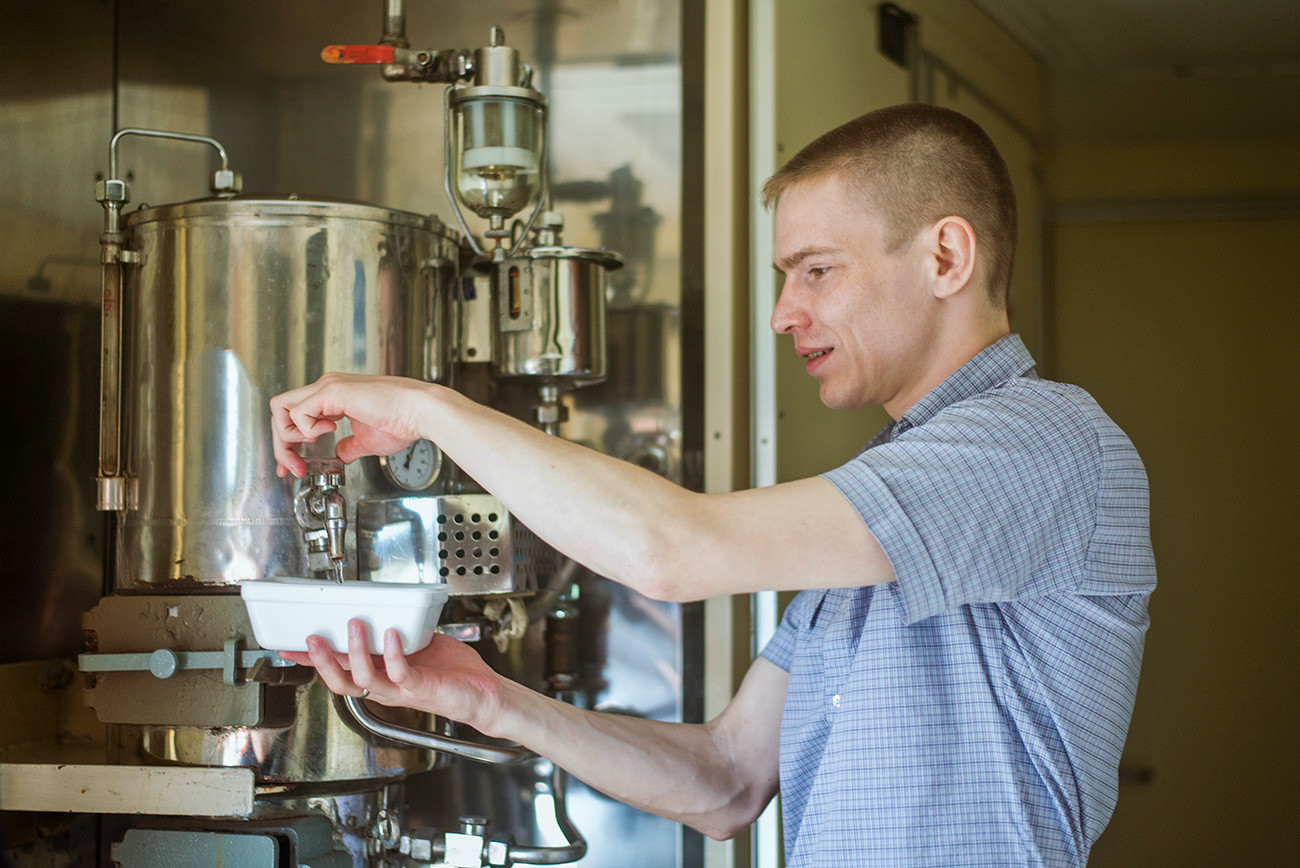 Generally speaking, it's not good for you to eat before going to bed but, if you can't wait, go to the restaurant car. Even smelly socks that have not been changed for three days won't kill the smell of freshly-made instant noodles. And for those who do eat instant noodles or instant mashed potatoes in a stuffy train car at night, there is a special cauldron waiting in hell!