Retro trains that can transport you back in time (PHOTOS) 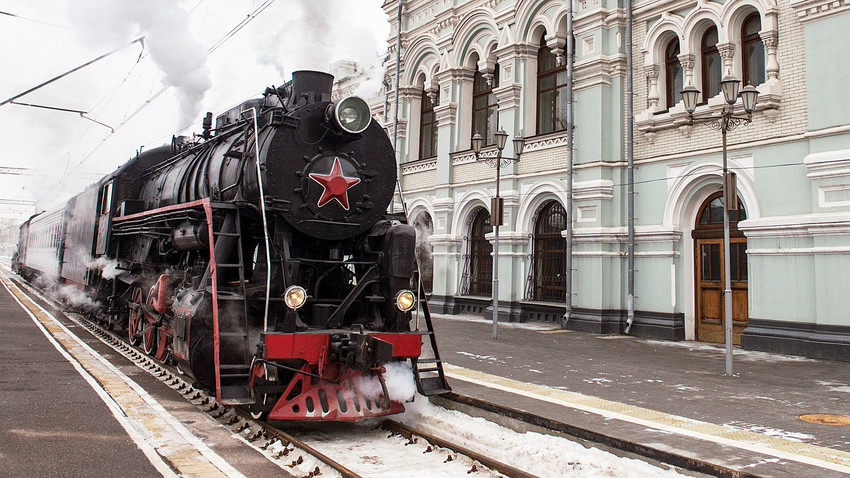 A retro train at the Rizhsky railway station, Moscow.

Evgeny Biyatov/Sputnik
In Russia, you can take a journey on a vintage train - not only on a guided tour - but also on a regular suburban route. And even on the metro!

Left: Sokolniki retro train in the style of the first metro train. Right: The first train of the Moscow metro, 1935.

The Sokolniki retro train runs on the red line of the Moscow Metro, along with regular trains. In fact, it was actually built in 2010 to mark the 75th anniversary of the metro, but is stylized to look like a 1930s train. Inside, it has soft seats made of faux leather, as well as lamps and handrails of that era. And no advertising on the walls, especially since the walls are covered with lincrusta and nothing will stick to its deeply embossed surface anyway. Incidentally, this is the only train in the Moscow Metro that does not have Wi-Fi. That is because passengers in the 1930s read books, not blogs! 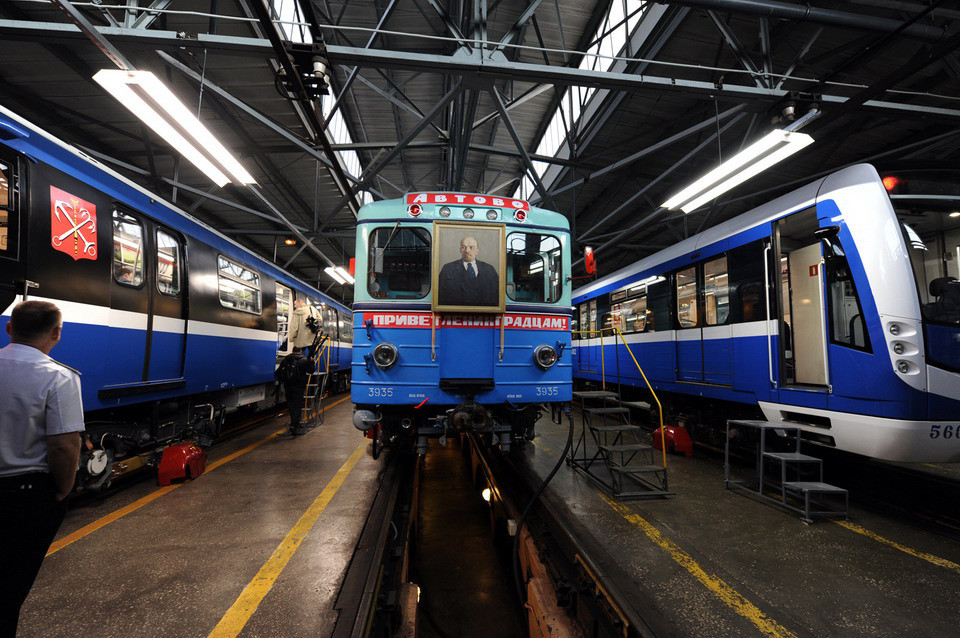 The St. Petersburg metro has its own retro train, too, but it can only be ridden on with a guided tour. It consists of four restored 1960s train cars, which, in addition to the usual seats, also house an exhibition about the history of the subway. The train was launched in 2015 to mark the 60th anniversary of the St. Petersburg Metro. At first, it ran on weekends between Avtovo and Ploshchad Vosstaniya stations; however, now this train can only be seen a few times a year, and only on a guided tour (in Russian, English and Chinese), where passengers are even allowed to take a peek inside the driver’s cabin. The tour can be booked on the St. Petersburg Metro website. 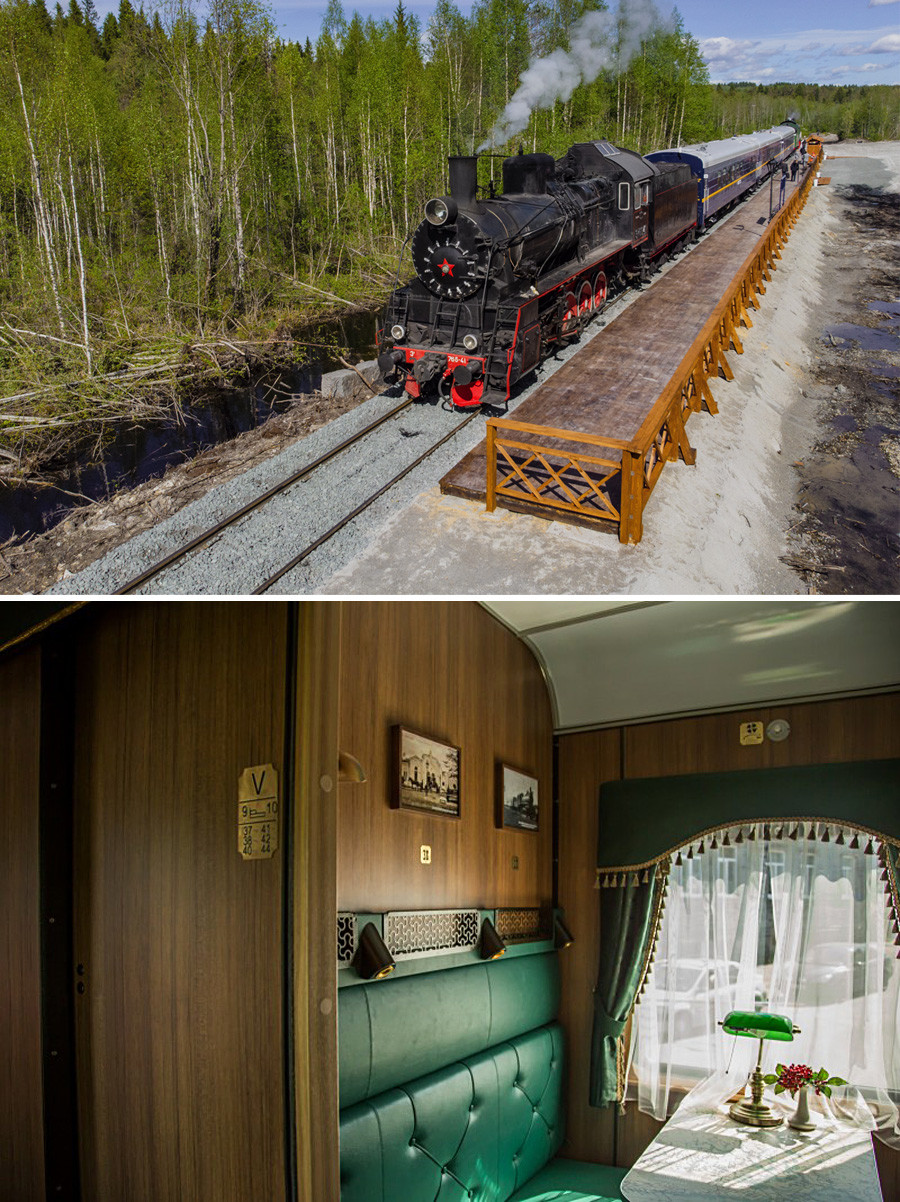 You can take this retro train that takes you to one of the most beautiful national parks in Russia. Starting from June 2019, the Ruskeala Express runs daily between Sortavala station (250 km west of Petrozavodsk, the capital of Karelia) and the park. It departs Sortavala at 10:40 AM and leaves the park at 530 PM. This is the only daily steam-powered passenger train left in Russia. It consists of five train cars (four with passenger compartments and a restaurant car), whose interiors are fashioned to the late-19th century look. It also runs with a locomotive built in 1949: with coal, smoke and steam.

The journey to the park takes about an hour. Tickets can be bought at any Russian Railways ticket office or on their website (sales open 45 days in advance, and a single ticket costs about 300 rubles, roughly $5). A ticket to the national park can be bought on board the train (that will also set you back 300 rubles). The route became so popular that in the first month after its launch it carried more than 3,500 passengers! Previously, the Ruskeala park was only accessible by car. 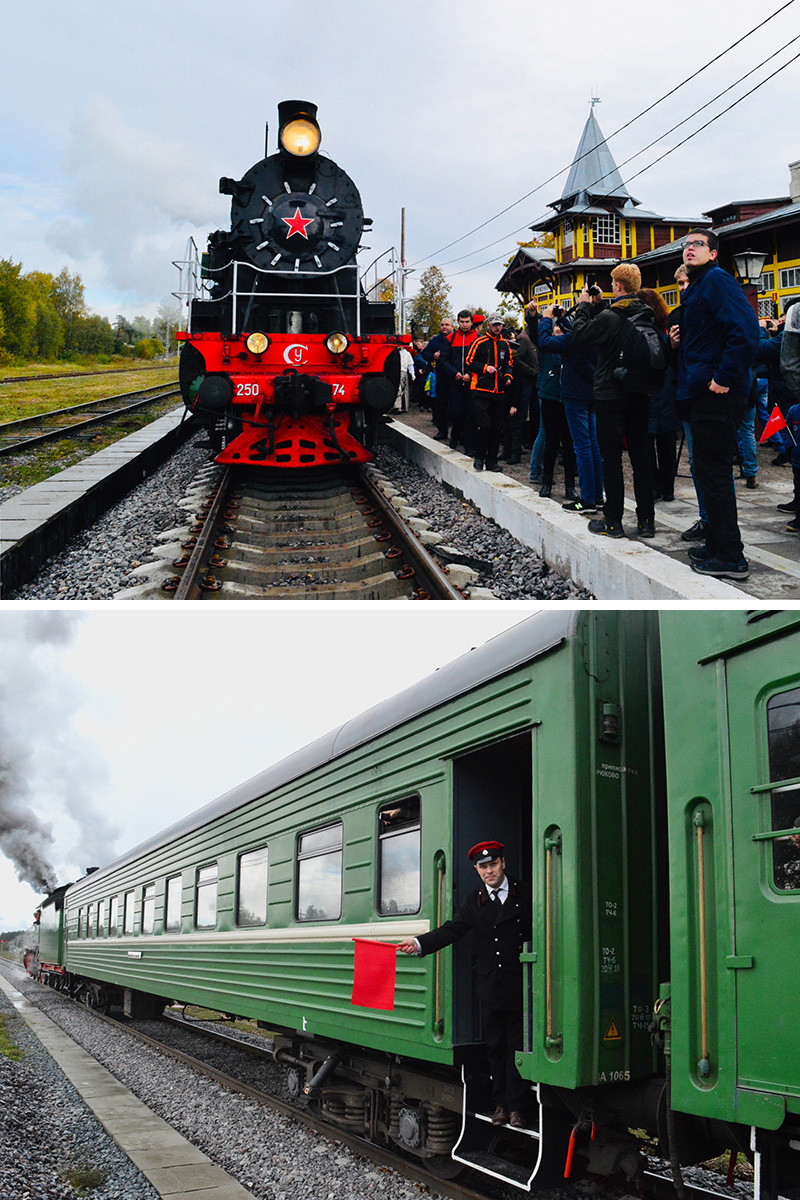 There is a regular commuter train leaving the Bologoye station (175 km north of Tver) every Saturday at 9.25 that is pulled by an L series steam locomotive from the late 1940s. Its engine drivers and train attendants are all dressed in 1940s uniforms and sell old-style tickets. However, the seats in the cars are modern (the original wooden benches have been replaced with new cushioned seats, for passengers' comfort. The train arrives in Ostashkov at 1:07 PM, and departs on its return journey exactly two hours later, at 3:07 PM. Along the way, it makes a 25-minute stop at the old Kuzhenkino station, which is now a museum. In Ostashkov, there is enough time to check out Lake Seliger, as well as the old city. Tickets can be bought at Bologoye or Ostashkov, and onboard the train. A single ticket costs 300 rubles (ca. $5). 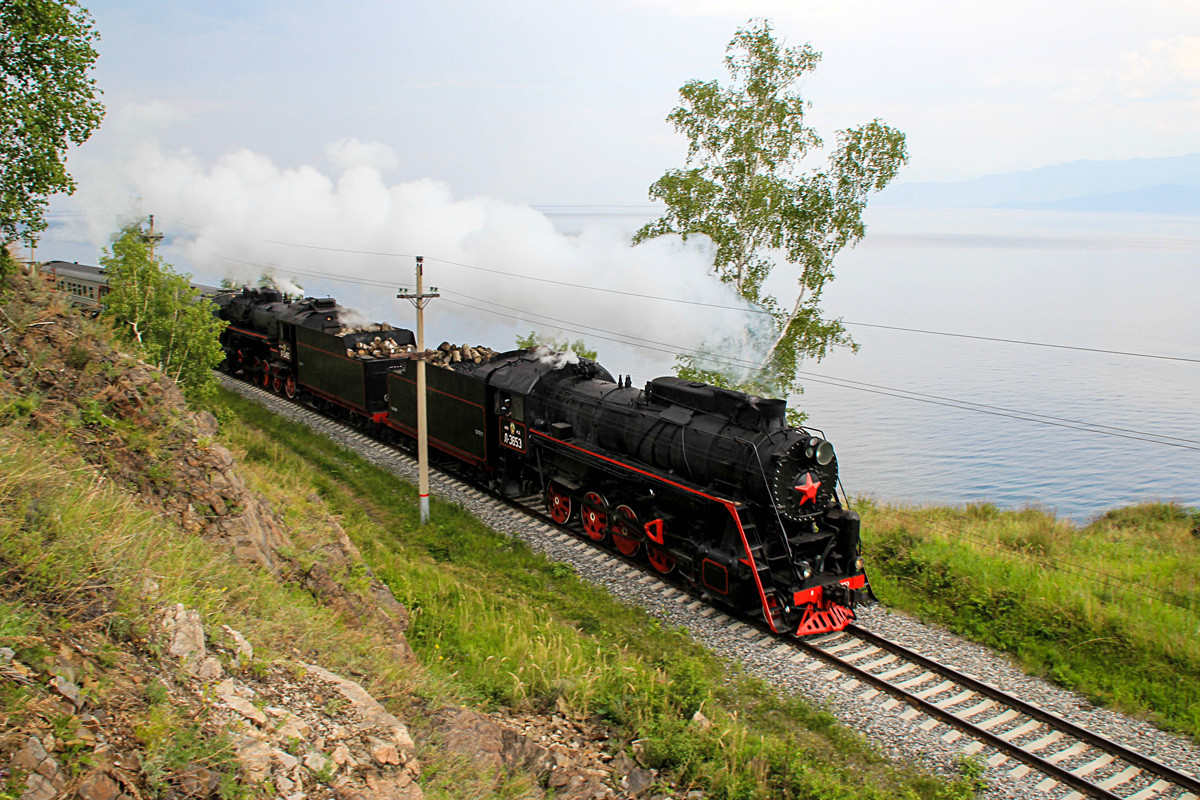 A steam engine of a tour train rides on the Circum-Baikal railway, a part of the East Siberian Railway along the shores of Lake Baikal.

The world's deepest lake can be reached in many ways, but perhaps the most romantic one is on a vintage train, with a 1940s steam locomotive and new train cars. It departs from the Irkutsk railway station at 8.00 AM and travels along the Circum-Baikal Railway, making several stops where you can admire picturesque views of the lake. The train arrives at its final destination, Baikal port, at 7.30 PM, and passengers then return to Irkutsk by bus. The round tour costs 4,000 rubles (around $60) per person and can be purchased either on the website of the Russian Railways travel agency or in its offices in Moscow or St. Petersburg.

6. From St. Petersburg to Tsarskoye Selo 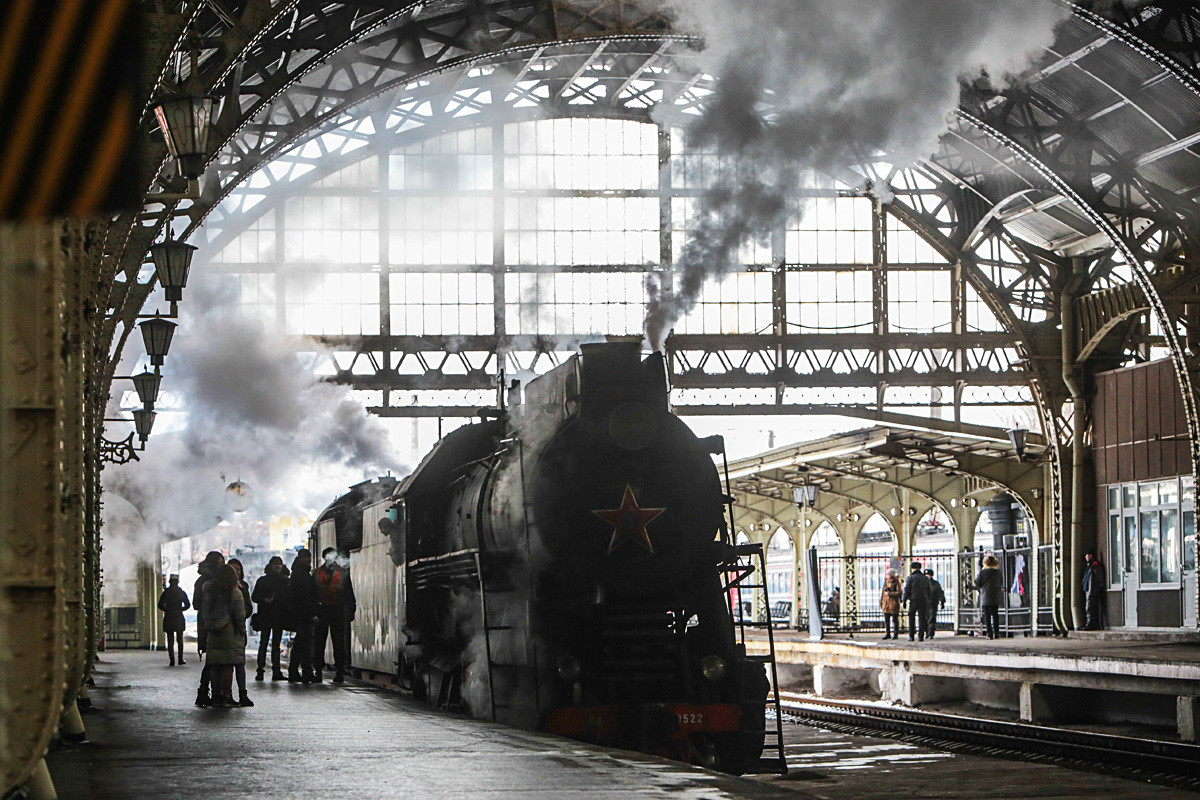 Every other Sunday, you can take a vintage train from St. Petersburg's Vitebsky railway station to Tsarskoye Selo. The train uses an L series 1940s locomotive with new train cars. During the two-hour journey, passengers are presented with an interesting presentation about the history of railways in Russia, while being dined with hot tea in traditional iron cup holders and various sweets and pastries. Unfortunately, the return journey is by coach, however! Tickets cost 1,300 rubles (ca. $22) per person and are available on the Russian Railways travel agency’s website.

7. From Moscow to Vladivostok 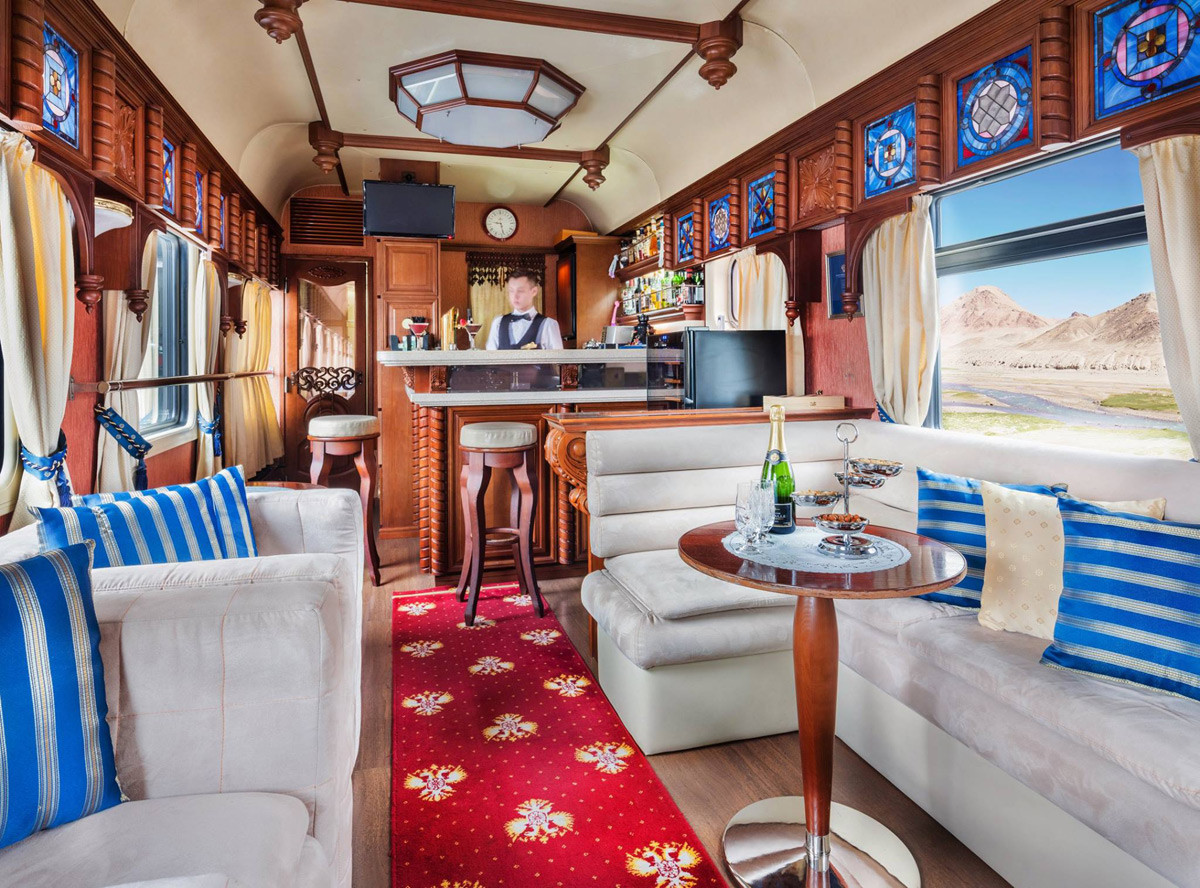 Yes, one can even take a trip across the whole of Russia in a retro train. There are several options for trips from Moscow to Vladivostok, that usually last up to two weeks and make stops (with excursions in different languages) in Kazan, Yekaterinburg, Novosibirsk, Baikal, Ulan-Ude and Khabarovsk. Passengers can either return to Moscow by plane or continue their journey further into Asia. The trains consist of an L or P36 series steam locomotive from the 1950s and new train cars, with the interior fashioned to look like pre-1917 revolution Russia.

The “cheapest” option can be purchased from the Russian Railways travel agency (prices start from $6,000), while the most expensive option, on the Golden Eagle train, will cost over $31,000(!!). Not surprisingly, this is the most expensive train in Russia.