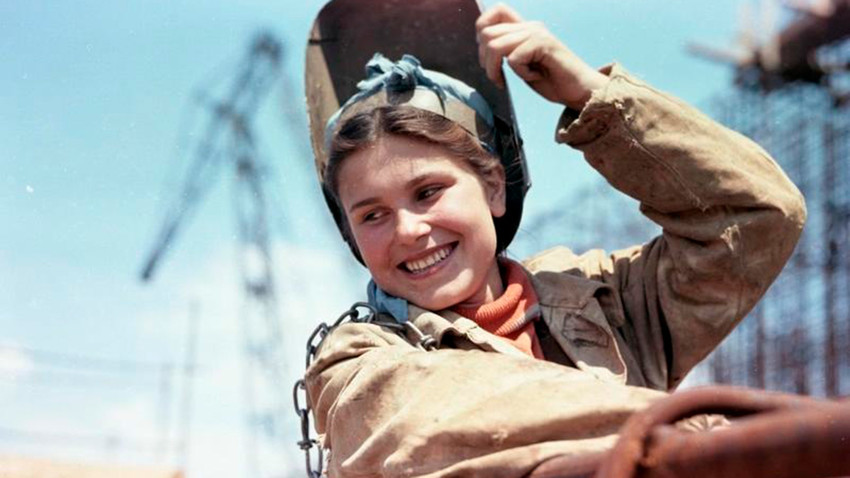 Vsevolod Tarasevich/MAMM/MDF/russiainphoto.ru
From sharing a bathroom with eight other families to living in private, spacious apartments in semi-futurist high-rises, the Russian people’s living conditions dramatically changed throughout the last hundred years.

Shortly after the Communist Revolution, headed by Vladimir Lenin in 1917, radical new projects appeared, outmoding Russian lifestyle ideals. With a view to raising a new type of well-organized and hard-working citizen, capable of building socialism and then communism, the government spearheaded great changes in people’s lives, starting with housing. The Soviets nationalized private property and started the so-called “уплотнение” (housing compaction), giving rooms to working-class families in large central apartments that used to belong to a tiny number of the former gentry. This project officially laid the groundwork for the often bizarre kommunalka housing - a resilient symbol of the Soviet past. 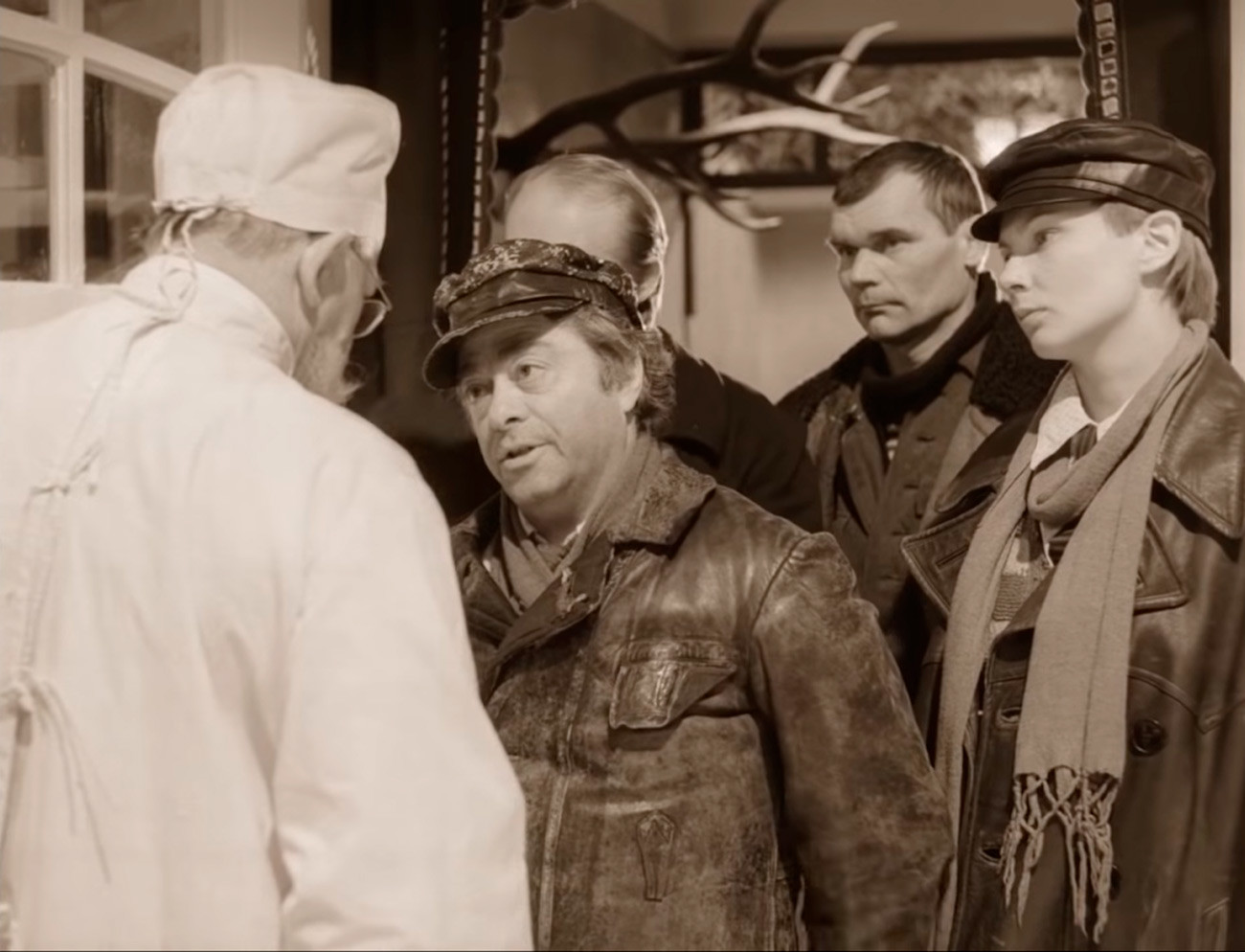 Scene from “Heart of a Dog” by Vladimir Bortko, based on Mikhail Bulgakov’s novel of the same name. House management representatives attempting to reappropriate two rooms for public needs from Professor Preobrazhensky’s 7-bedroom apartment.

Artists inspired by the newly established state, were also creating revolutionary designs that would reflect an era of equality, functionality, and modernity. Starting from the 1920s, architects modeled buildings in the constructivist style with emphasized industrial and proletarian features, such as the Narkomfin building at Novinsky Boulevard 25 in Moscow, designed by Moisei Ginsburg and Ignaty Milinis in 1928. This massive communal living project had private family apartments, most of which, however, did not have kitchens and showerrooms. Organizing and structuring the residents’ lives, the architects put an emphasis on communal living, creating spaces for public use on the first floor and the rooftop. In order to have lunch, for instance, many tenants would go downstairs to a large dining hall, whereas during weekdays, they were supposed to eat in cafeterias at their work and to sleep mainly in their private apartments. 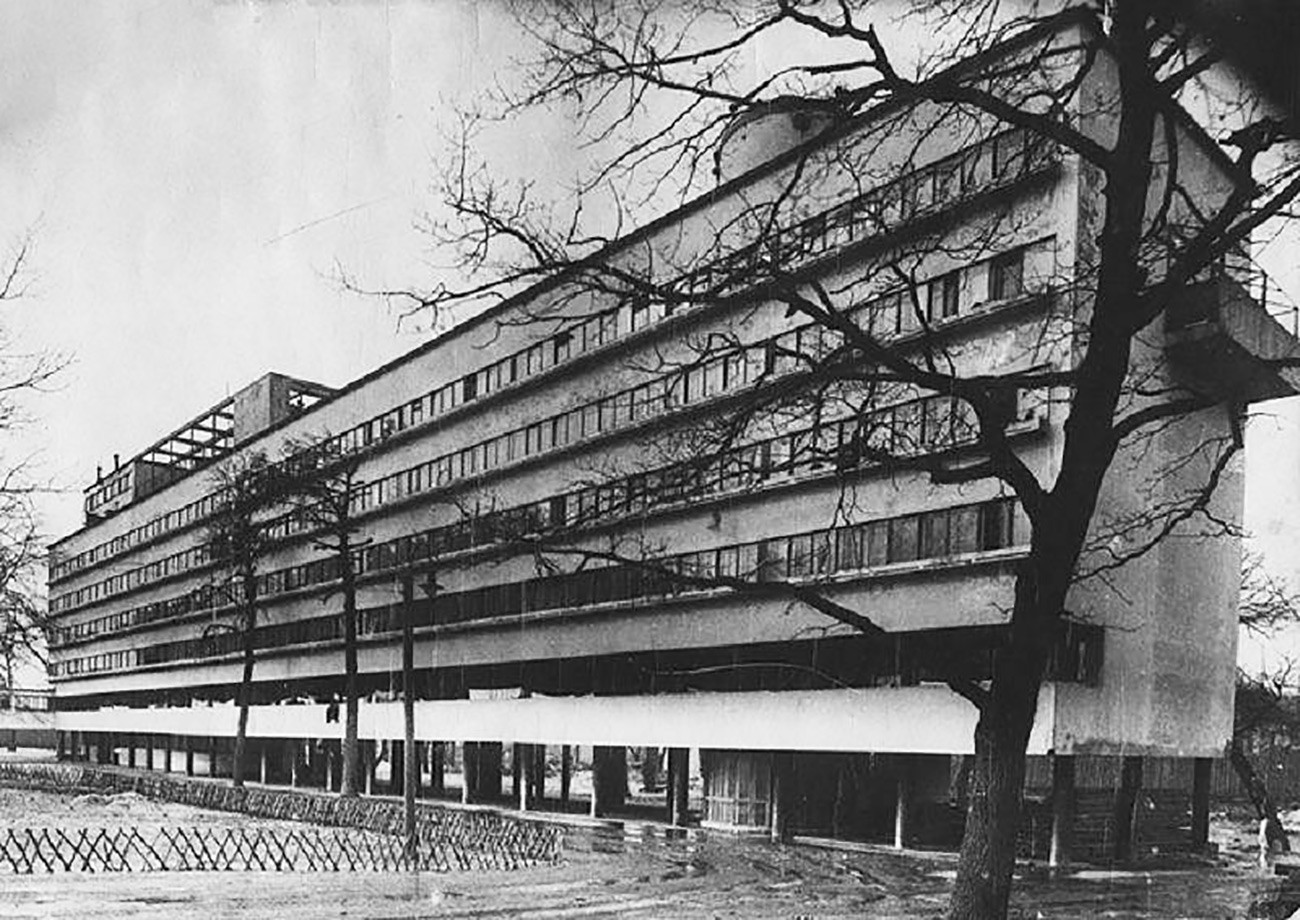 Narkomfin building in the 1930s.

During the rule of Joseph Stalin, mass housing projects accelerated immensely, creating new districts and whole cities. Rejecting the avant-garde experimentations of constructivist architects, Stalin established the new eclectic imperial style of Soviet architecture. The so-called “stalinkas”, usually grandiose structures with spacious apartments, housing primarily local elites, were a new symbol of growing industrialisation and expansion, consolidating the new ideology that would permeate every moment of people’s lives. Monumental neoclassical columns and balconies of building facades on vast prospects perhaps were also thought to inspire common people to work even harder in order to supply every Soviet citizen with such utopian conveniences. 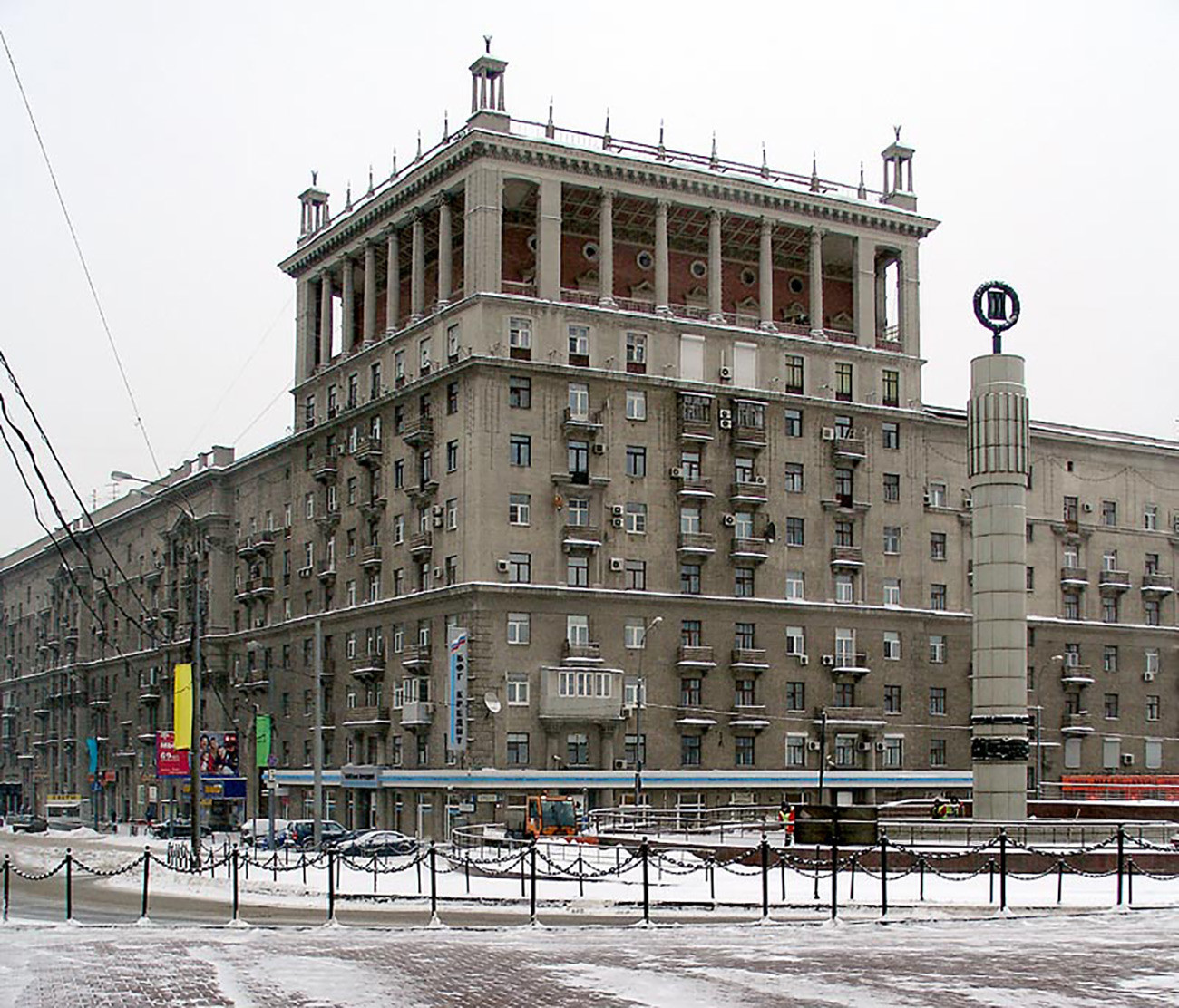 Apartment building on Kutuzovsky prospect 35 from 1938-1941 in Moscow.

Although most proletarians lived in communal apartments or standardized wooden two-storey structures, opportunities to experience imperial architectural luxuries were accessible to everyone in public places, such as houses of culture or the Moscow Metro, where cultural enlightenment and technological progress went hand in hand with each other, raising and educating all Soviet citizens. 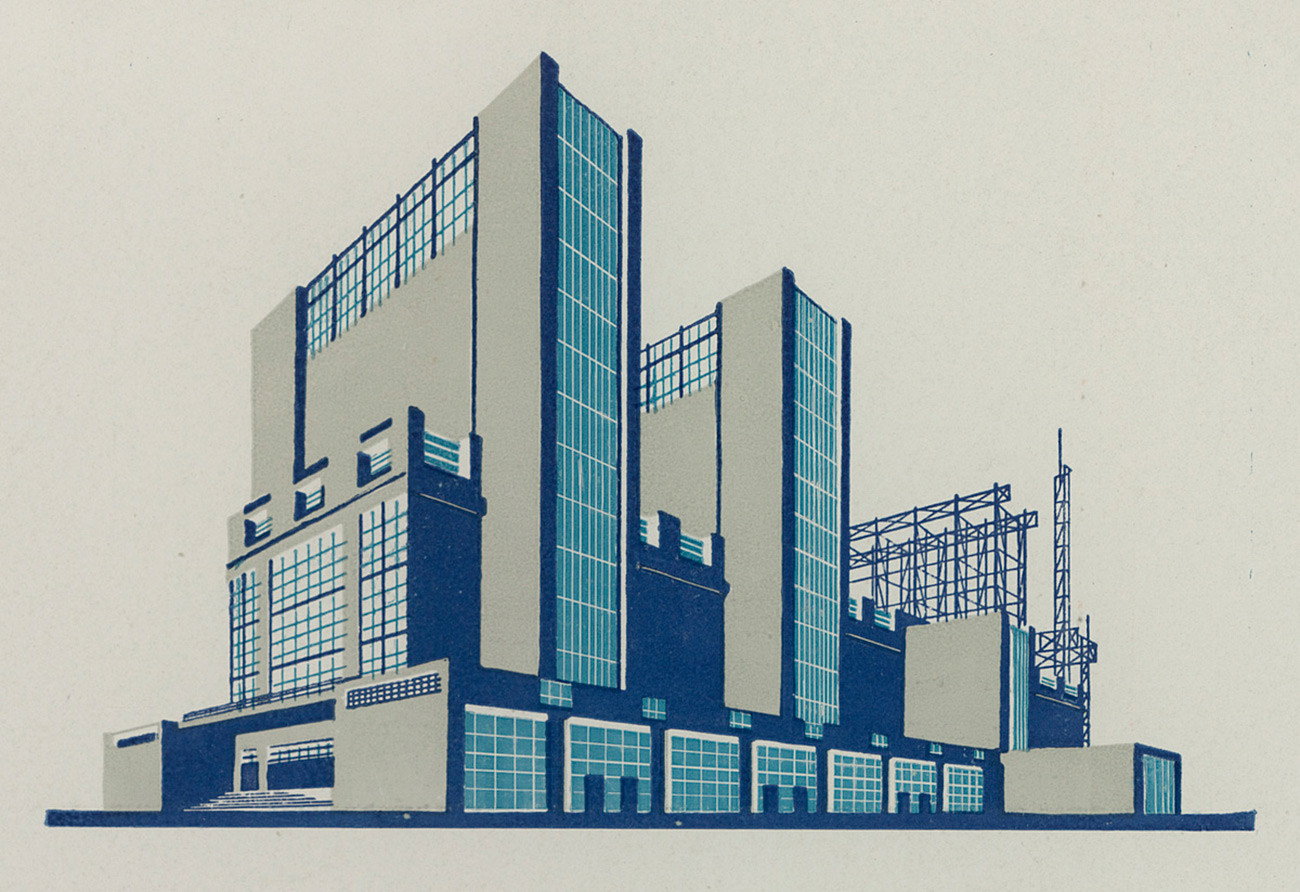 Nikita Khrushchev, 1953 - 1964. Economic simplicity on the way to communism

The most passionate Soviet proponent of socialism and communism, Khrushchev advocated for economic simplicity and functionality in architecture, renouncing Stalin’s bourgeois tastes. Therefore, compact “khrushchevkas” quickly replaced older buildings to form new city landscapes. Concrete-paneled or brick buildings with tiny kitchens, significantly lower ceilings and smaller windows than in “stalinkas”, “khrushchevkas” contributed immensely to solving the problem of housing shortages for commoners in overpopulated industrializing cities. The government claimed that instead of decorative excesses, the true beauty in architecture was to see that all people have equal opportunities and conditions. To build a five-storey panel structure with no elevators was extremely time-effective and cheap, compared to “stalinkas”. Therefore, during this prolific construction era, the Soviet Union broke records in mass housing construction, providing millions of Soviet families with private apartments. 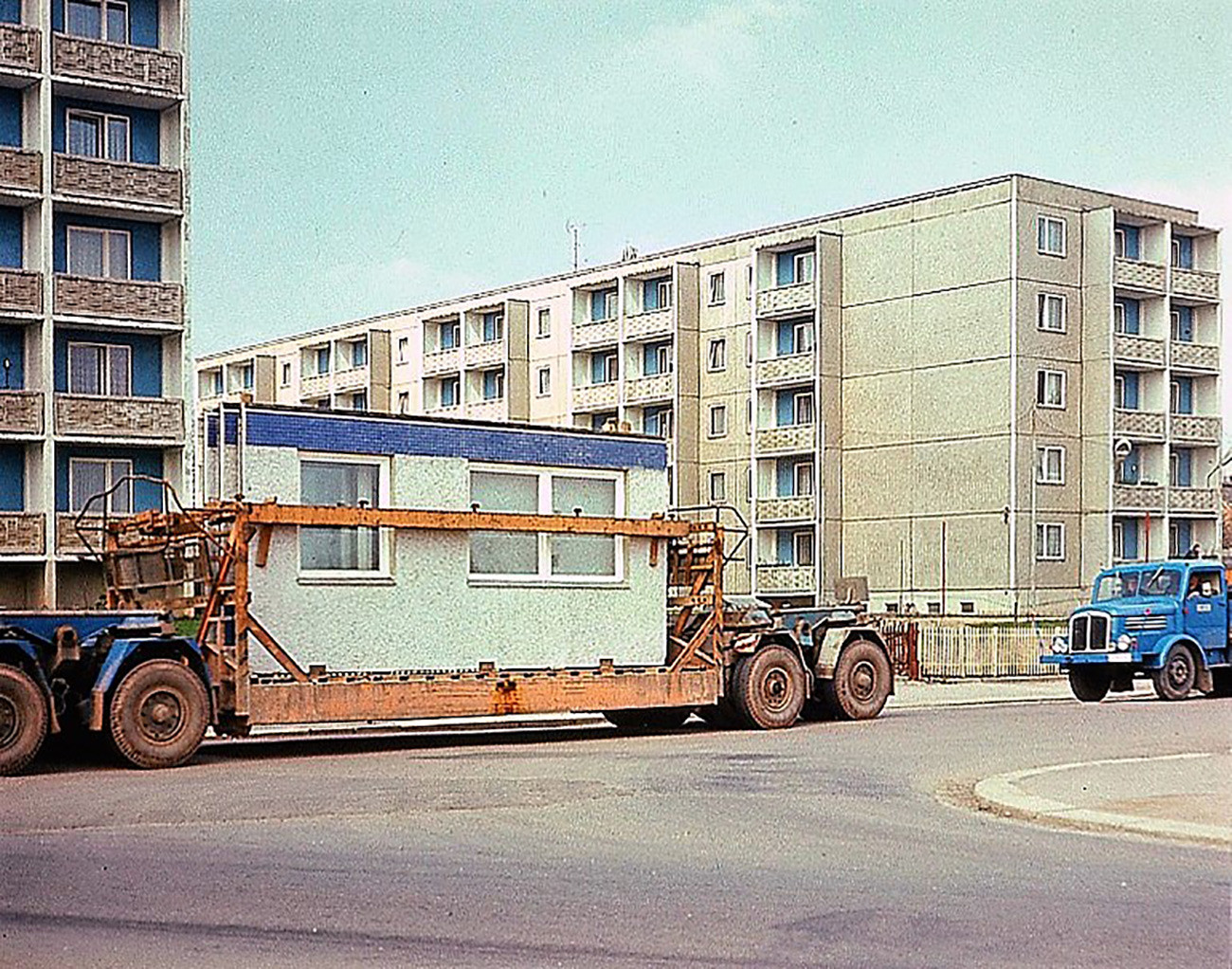 Even though standardised mass housing projects were first introduced during Stalin’s rule and the elegant and spacious “stalinka”-style buildings were still constructed for the late 1950s-60s elites, Khrushchev’s name symbolises the era of cheap five-storey buildings that populate most post-Soviet cities to this day.

During the “Era of stagnation”, highrises would become the embodiment of solid stability and boredom. During the comparatively peaceful 1960-70s, the economy slightly improved, which is why new much taller “brezhnevkas” had begun to dominate. People who lived in “disposable”, temporary wooden buildings erected during Stalin would eventually be able to replace their old housing with convenient and comparatively spacious apartments after waiting in lines since as far back as the late 1930s. 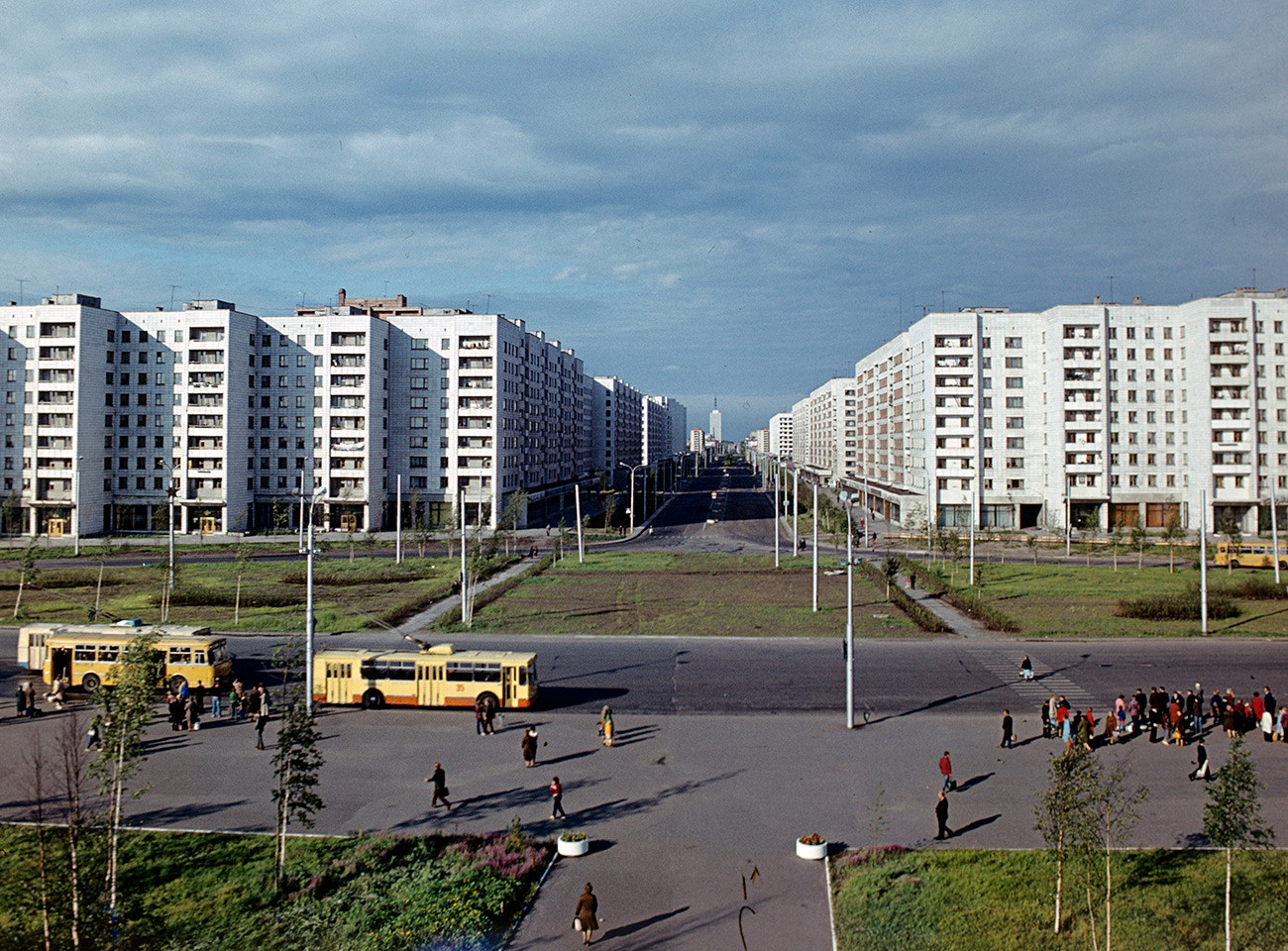 The tumultuous and experimental late 1980s-1990s

The economic hardships during Mikhail Gorbachev’s (1985 - 1991) and then Boris Yeltsin’s (1991 - 2000) leadership did not contribute to substantial changes in mass housing construction at the end of the century. However, as a result of the disappearance of official Soviet ideology and the sudden access to western cultures, new Russian “businessmen” commissioners appeared. The sudden political freedom didn’t impose any aesthetic or societal standards, which is why the new buildings from the late 90s are extremely diverse and extravagant, not even trying to match city landscapes. In an attempt to escape the standardized architecture of the past, new commissioners and architects constructed commercial buildings, luxury boutiques, and private houses in “neorussian”, “european”, high-tech, and many other styles, sometimes even mixing several together. Among the most unusual examples of apartment buildings are the “Patriarch” house and an egg house, both designed in the late 90s and finished in 2002 in Moscow. 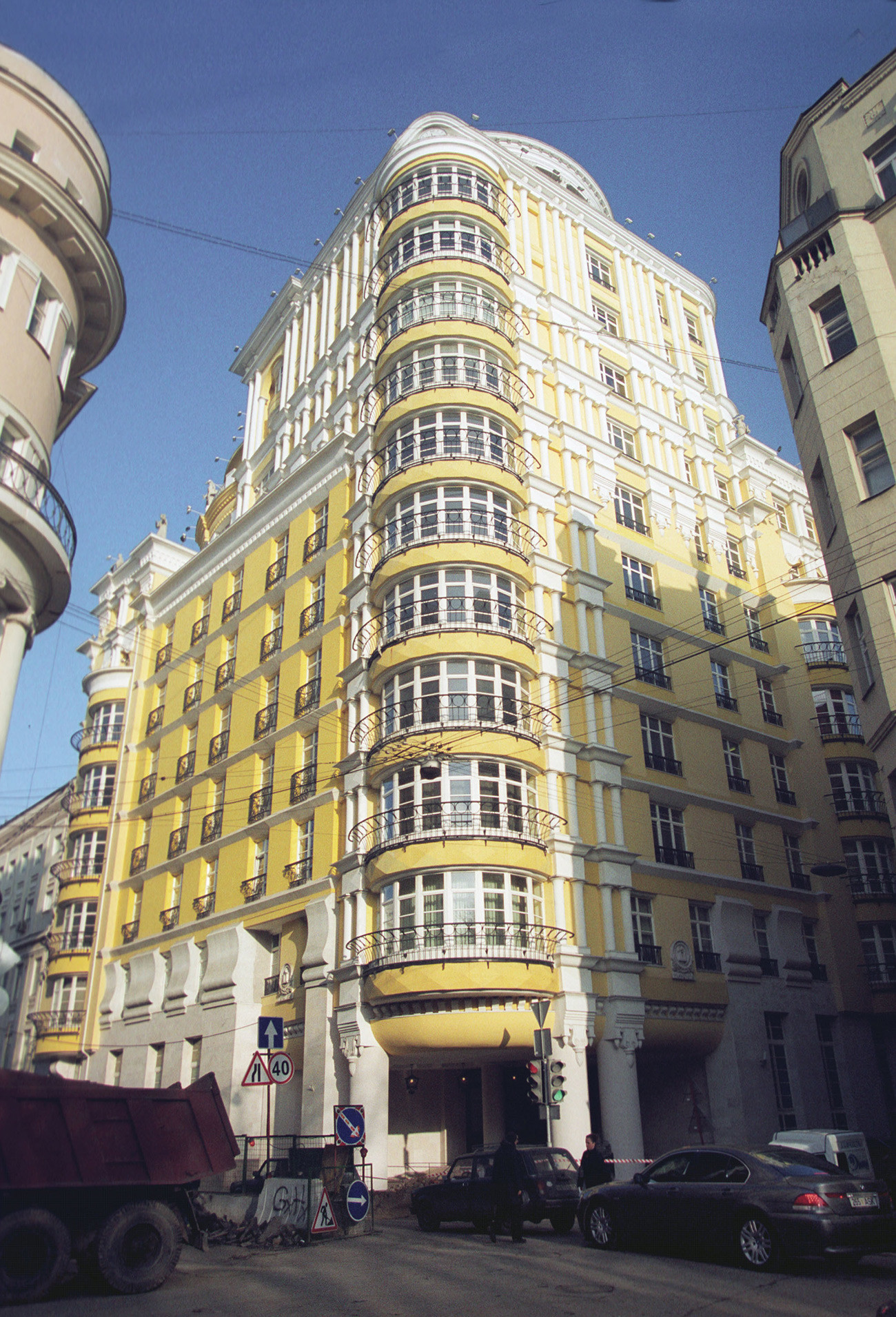 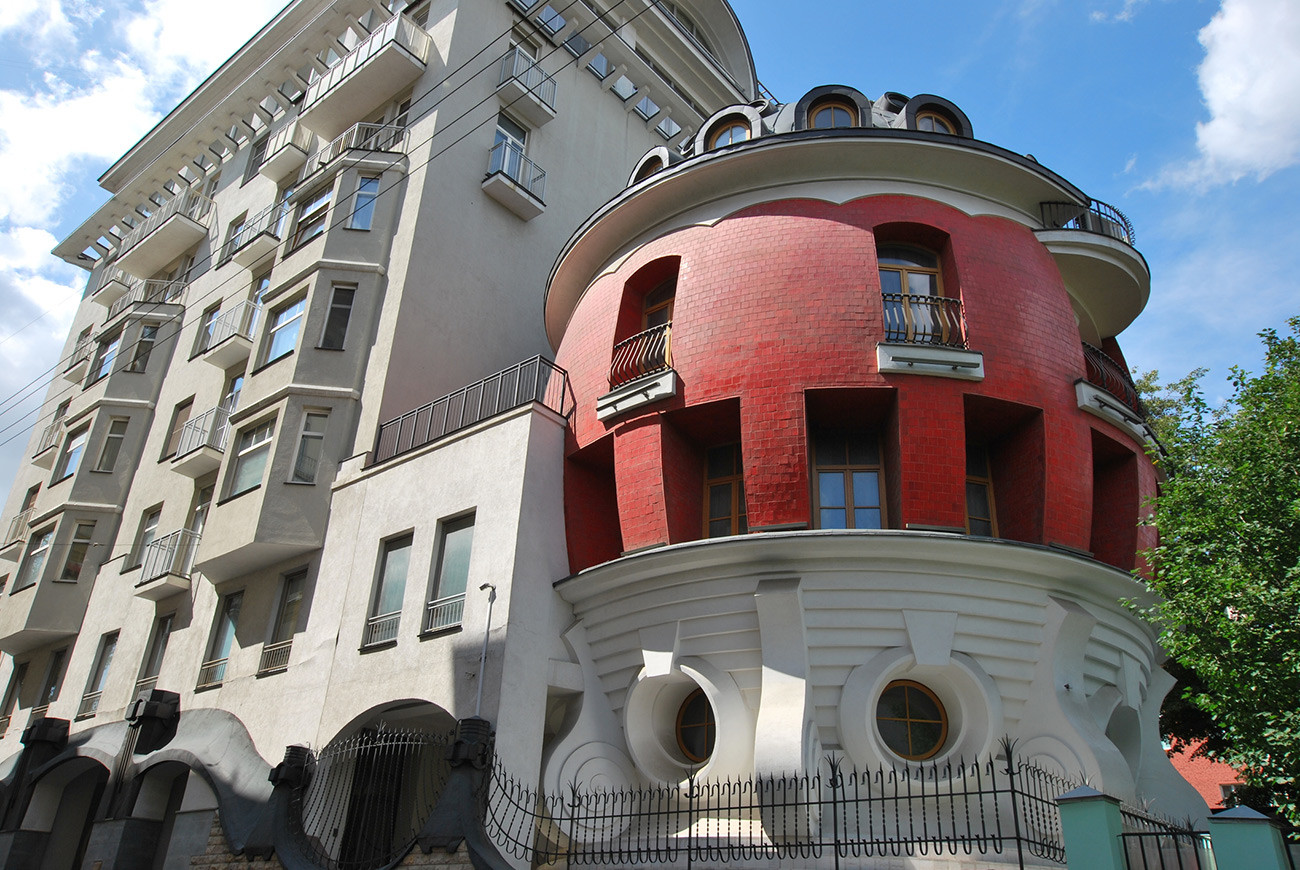 A decade after the USSR’s collapse, the Russian economy gradually recovered, average Russian salaries increased, and naturally, a higher demand for new, comfortable housing emerged. The suburbs of large cities expand outward every year, forming neighborhoods of identical highrises. Although rather contemporary in style and colors, the new blocks of well-structured monumental anthills recall, on the one hand, the utopian futurist projects of the early 20th century, and on the other, their Soviet replacements, drawing a full circle in the history of Russian 20th century architecture. 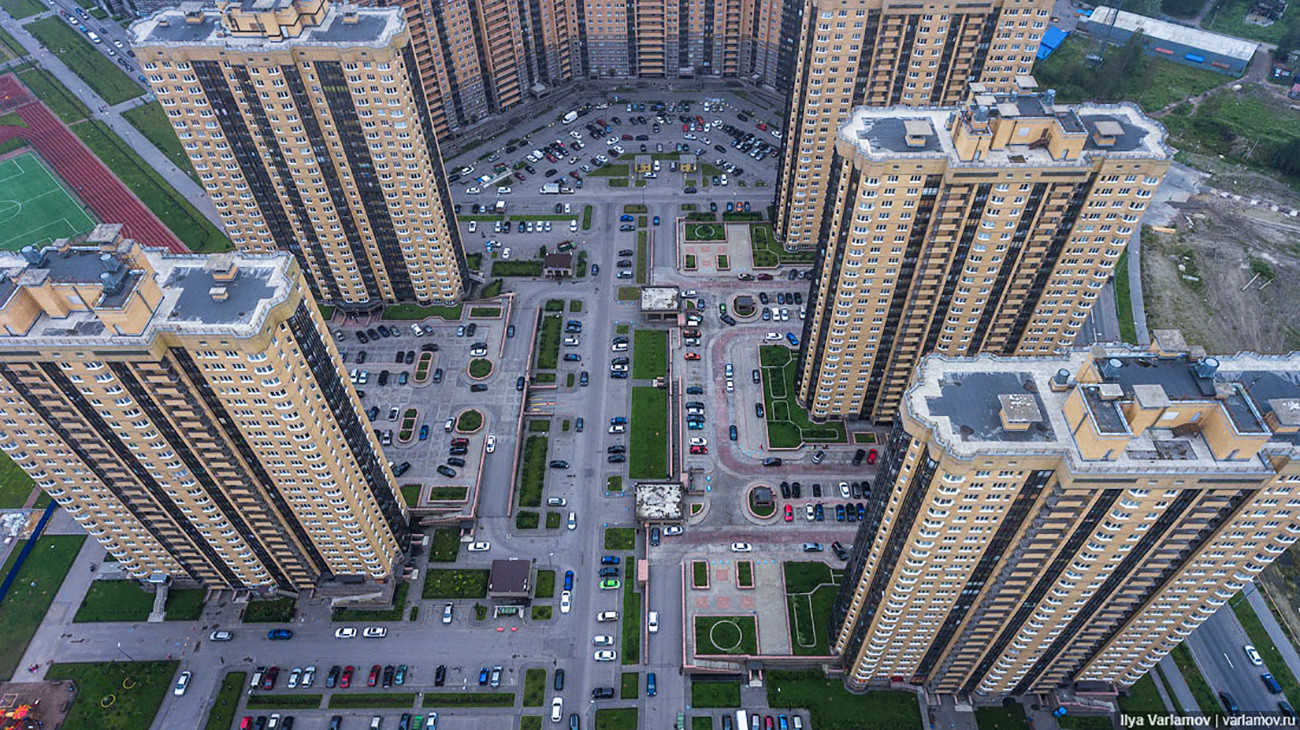 Parnas district in the north of Saint Petersburg