Tennis star Maria Sharapova hangs up her racket: her career in photos 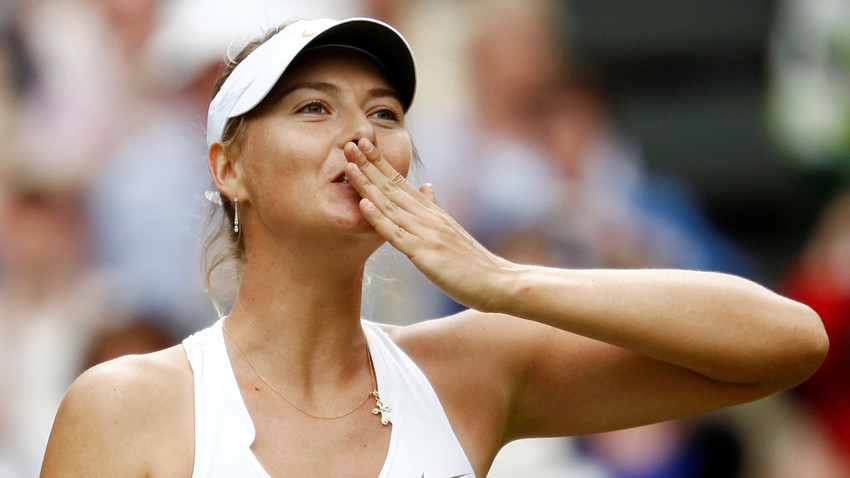 Reuters
Russian tennis player Maria Sharapova has announced her retirement after 28 years in the sport, in which she managed to win five Grand Slams. Our photo gallery charts how she changed, what she did, and what else she fought for over all these years.

“How do you leave behind the only life you’ve ever known? How do you walk away from the courts you’ve trained on since you were a little girl? ...I’m new to this, so please forgive me. Tennis - I’m saying goodbye,” said Maria Sharapova in a moving column for Vogue magazine about her retirement. She explained her departure as the result of injuries and age. Sharapova is 32 years old. 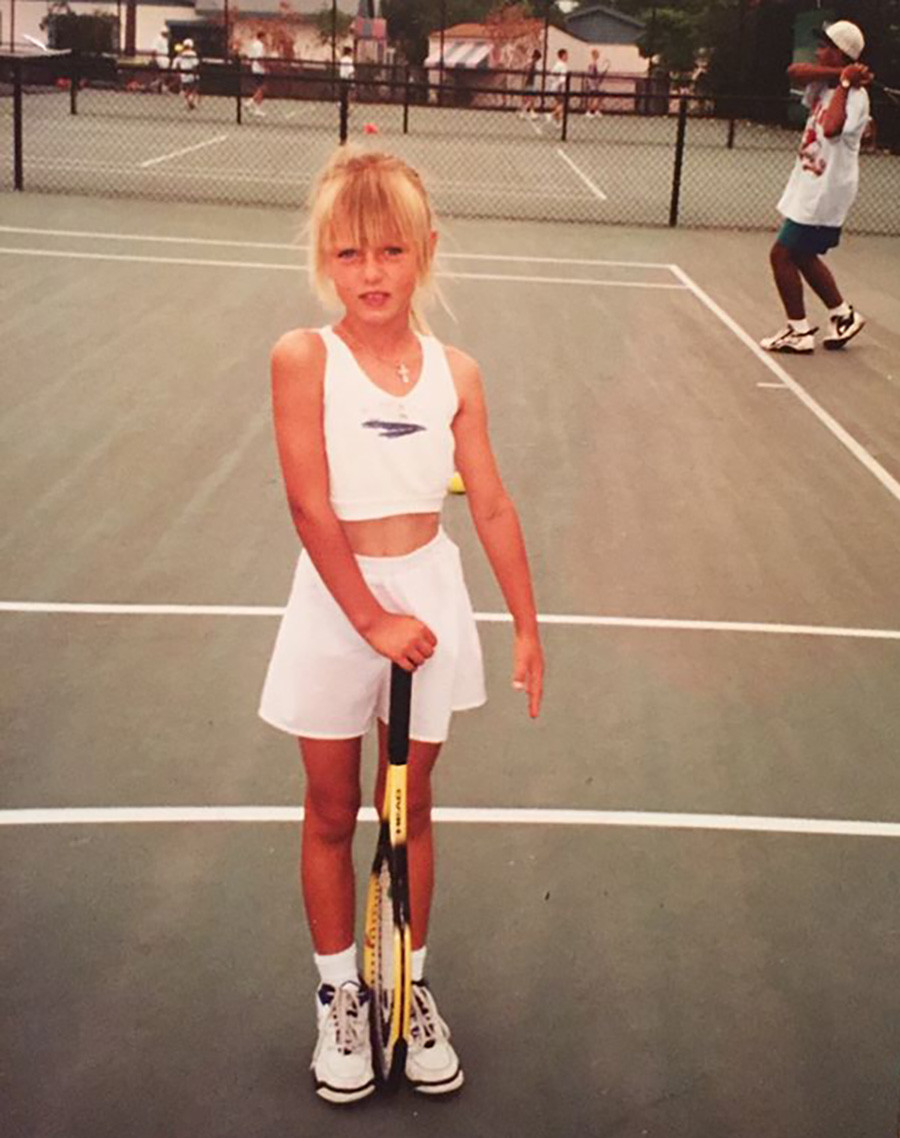 Maria was born in Siberia, where her family moved to from Gomel, Belarus a few months before her birth. At four years old, the young Masha (short for Maria) started tennis lessons, and at the age of six, she had a rally with the great Martina Navratilova during a demonstration lesson in Moscow. And it was Navratilova who first spotted Sharapova's talent. 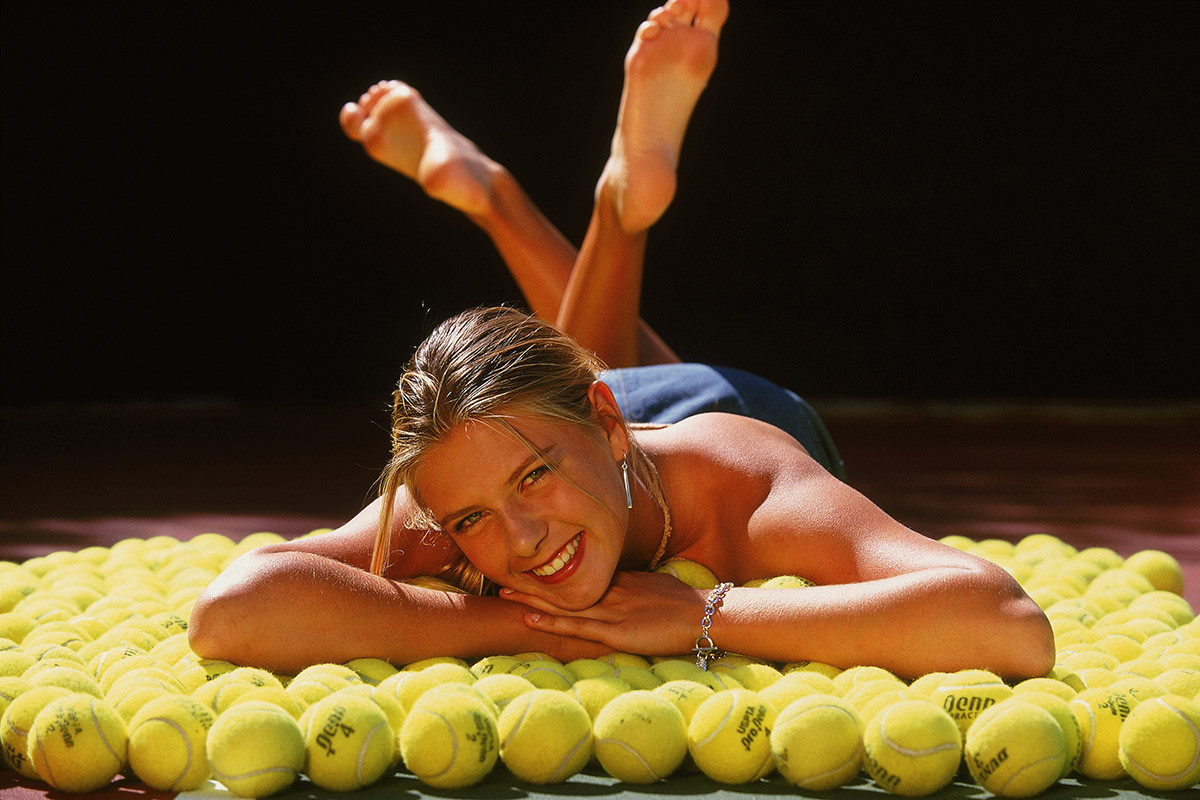 On the advice of the former world number one, the Sharapova family moved to the United States in 1995, where Maria was sent to Nick Bolletieri’s tennis academy in Florida. The family initially lived in a hostel and scrimped on everything, since her father, Yuri Sharapov, did not know English and could not find work for some time. 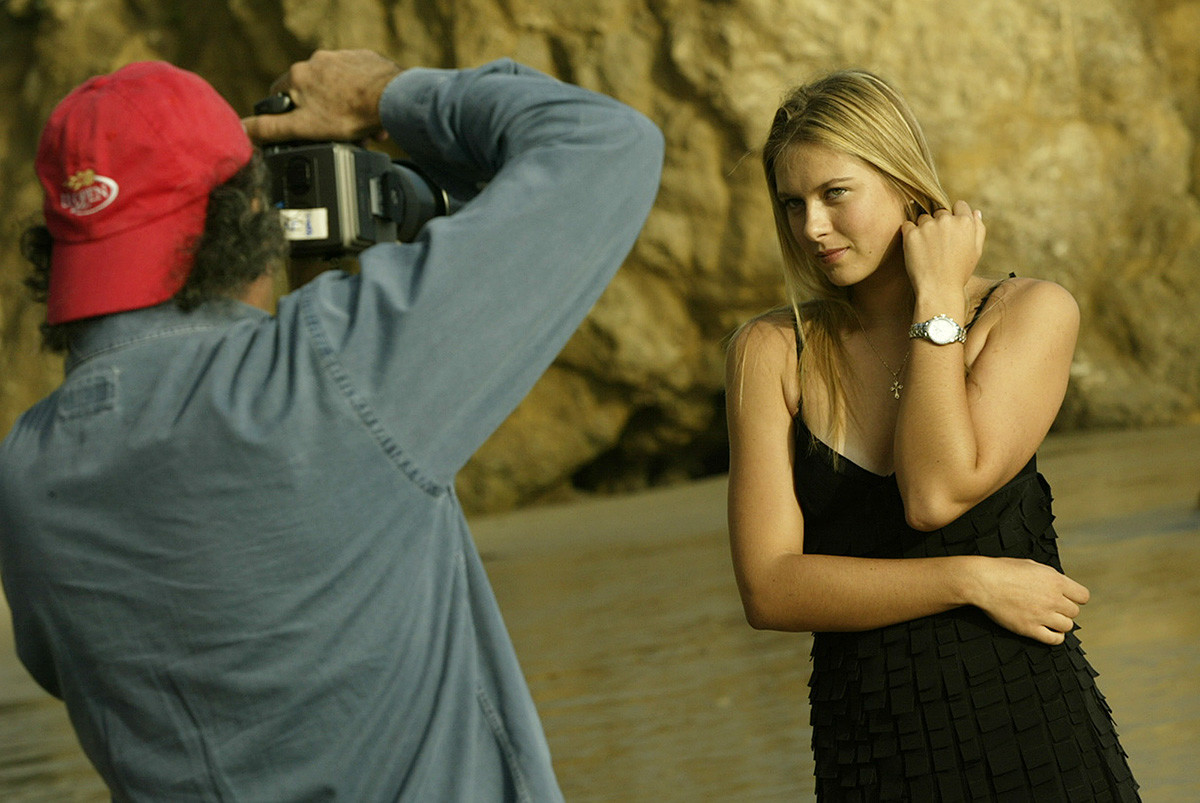 Maria Sharpova for a TAG Heuer watch ad on a Malibu Beach. 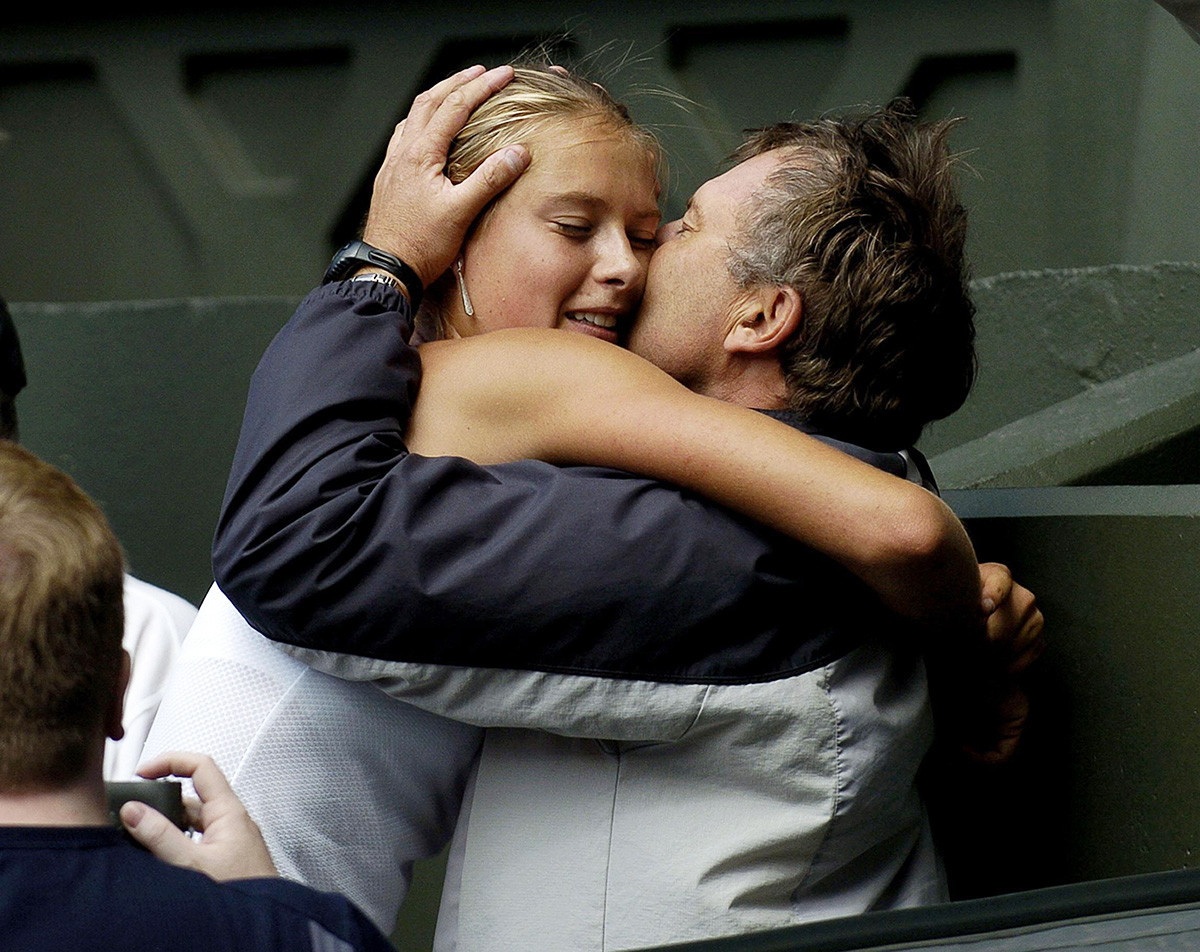 Sharapova with father Yuri after defeating Serena Williams in straight sets 6:1/6:4 in the final of the Ladies' Singles tournament at The Lawn Tennis Championships at Wimbledon

In 2004, a 17-year-old Sharapova became world famous when she beat Serena Williams to win Wimbledon, the most prestigious Grand Slam tournament. For many years after that, she was untouchable as Russia’s top female player. 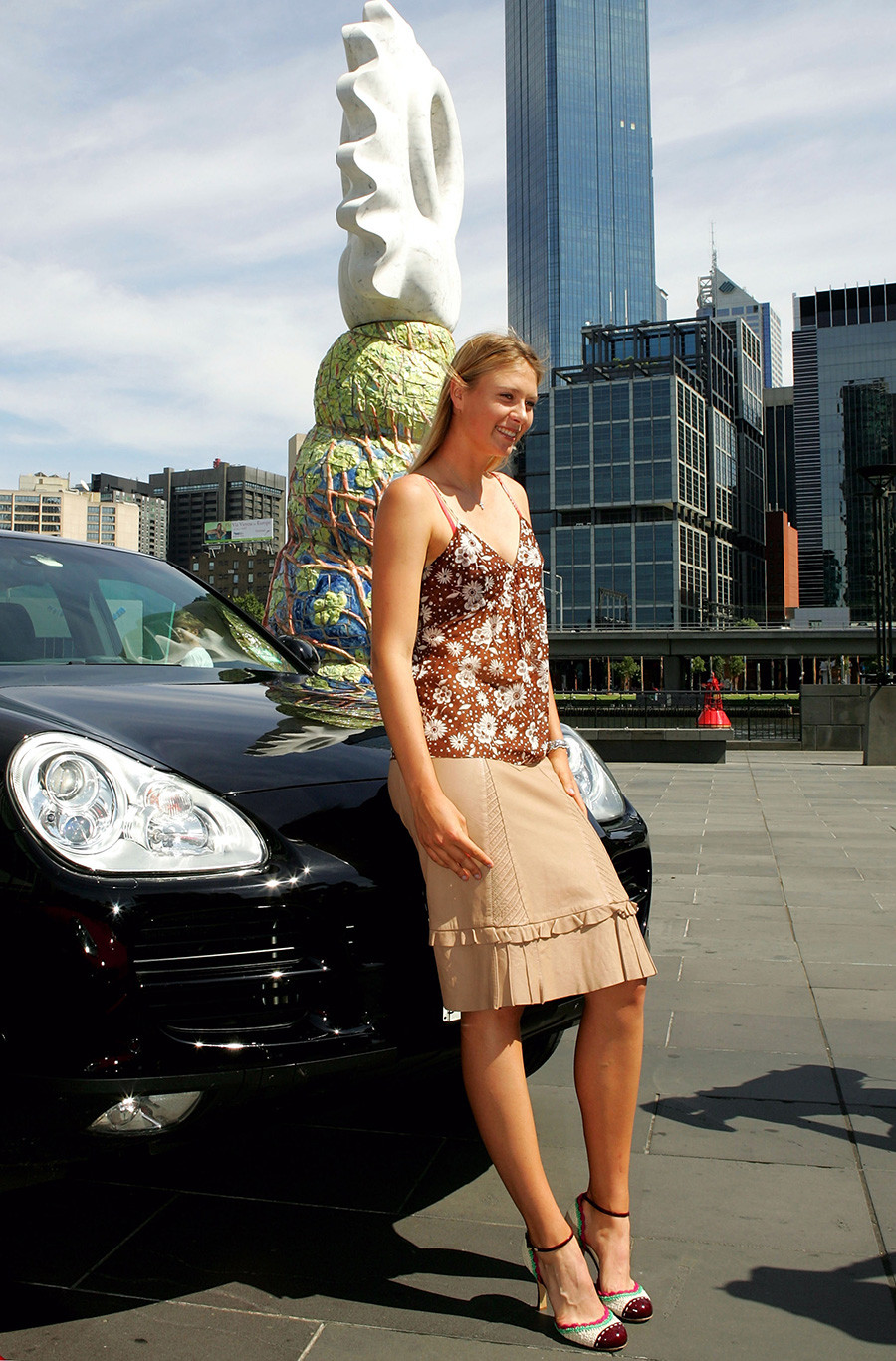 Maria Sharapova after donating the value of a Porsche won at the 2004 WTA Tour Championships to charity during day twelve of the Australian Open Grand Slam at Melbourne Park.

Sharapova became world number one in 2005, and had all the major sponsors beating a path to her door. A year later, she became the official face of Porsche. 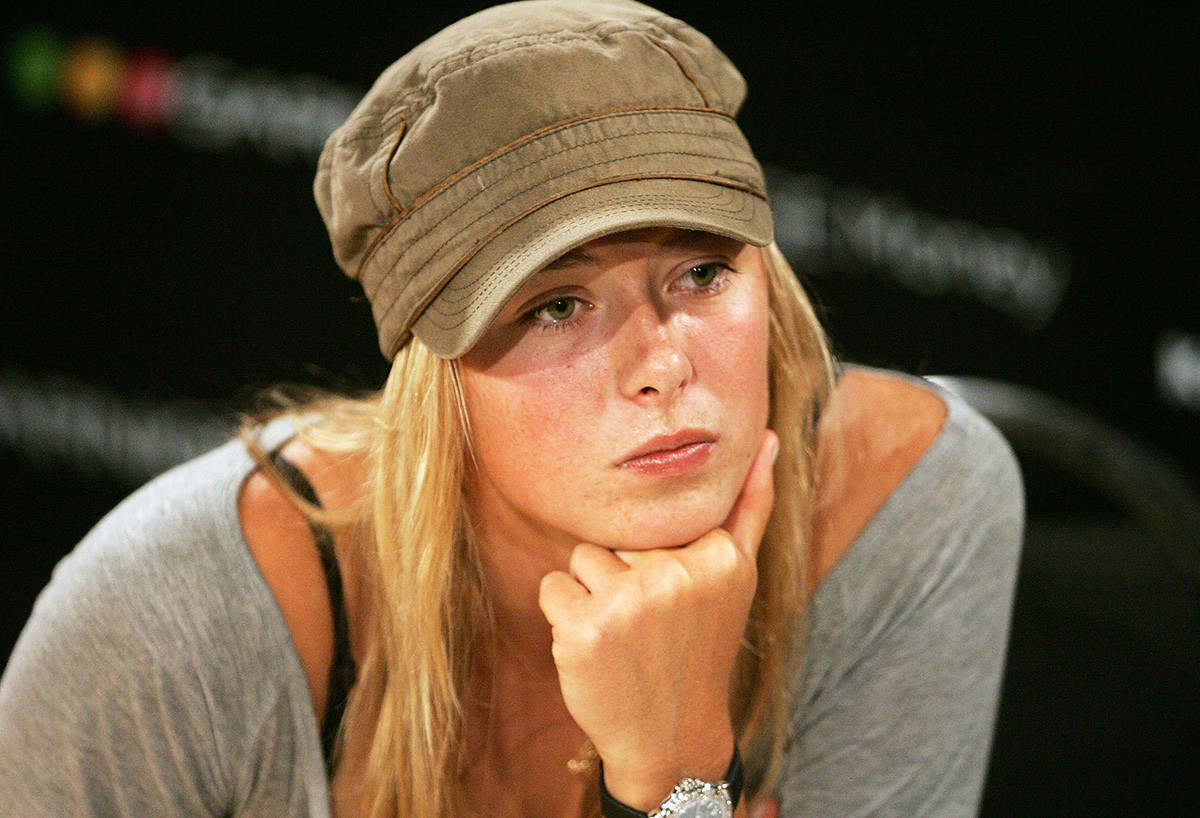 Press conference after defeat in her women's final match against Serena Williams of the USA in 2007.

Her first disappointment came in 2007 when she injured her shoulder for the first time. “At first it was nothing — a twinge in the shoulder when serving. But it got worse and worse,” she wrote in her autobiography. Soon, the situation became serious. Her doctor diagnosed a ruptured tendon that needed emergency surgery. 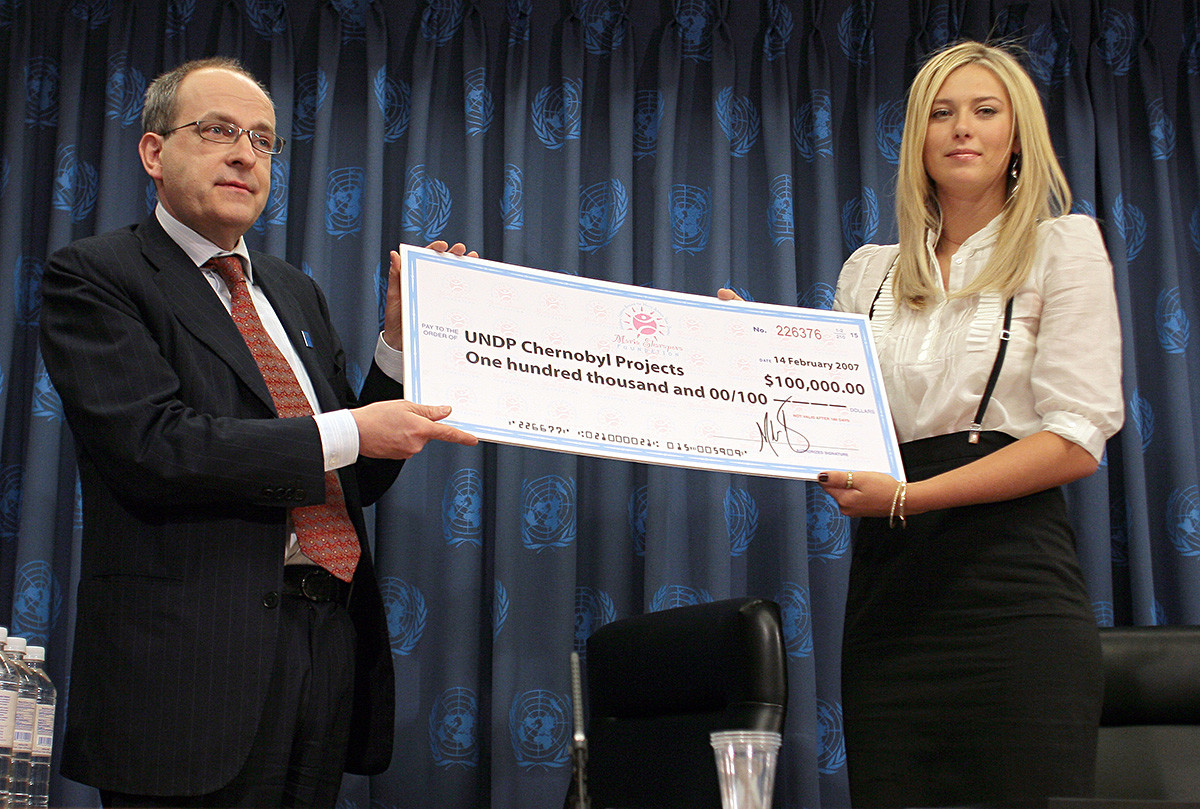 Ad Melkert, Associate Adminsistrator of the UNDP receives a check from Maria Sharapova during the press conference in which she is appointed UNDP Goodwill Ambassador at the United Nations on February 14, 2007.

Having recovered from surgery, she resumed her tennis career. But the pain was still there, and she just had to put up with it. Alongside tennis, she got involved in charity work. With UN support, she set up her own fund in support of victims of the Chernobyl disaster and their families. 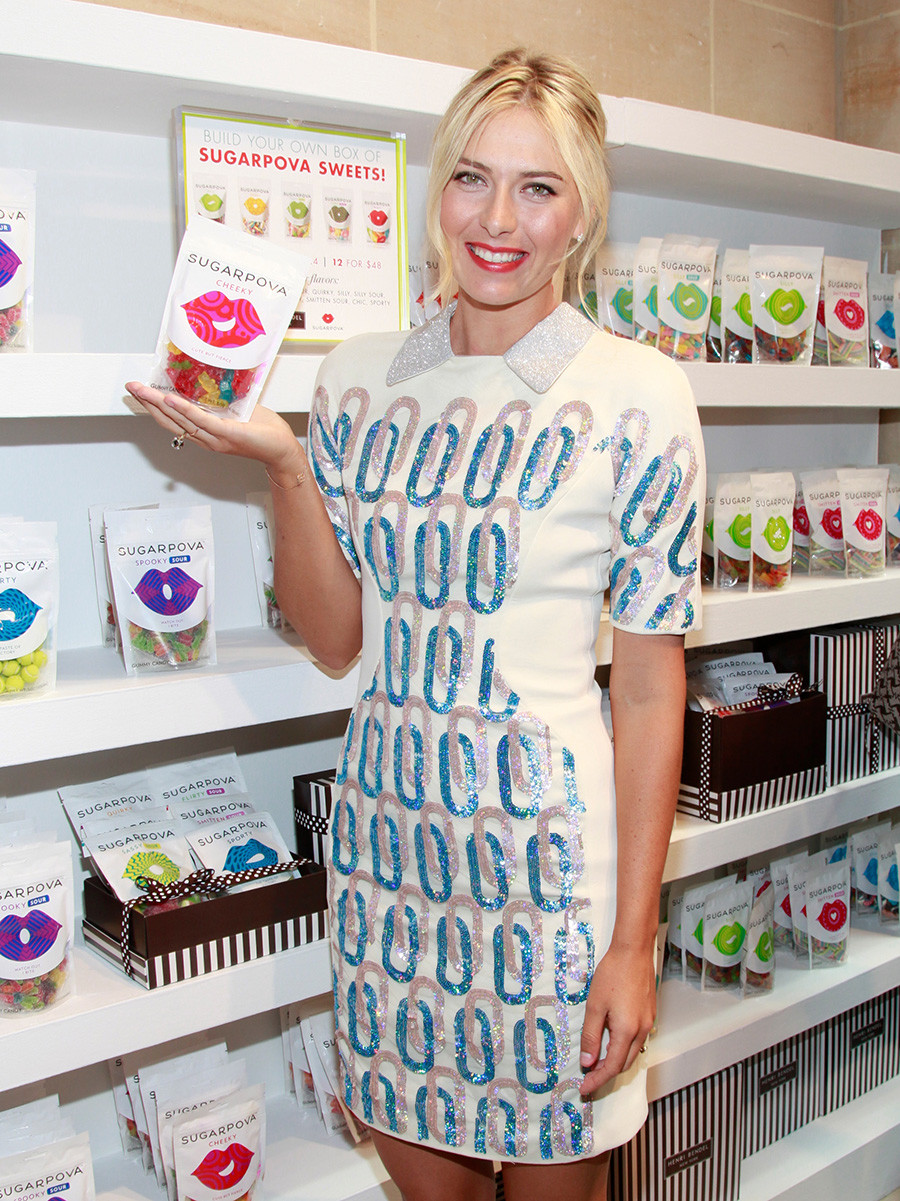 Sharapova herself became a brand, launching a range of personalized ‘Sugarpova’ premium candies and accessories. “When I had to take a break [due to injury], it struck me: ‘Masha, you’ve been playing tennis for so many years, but you need to think about something else,’” she said in an interview with Russian newspaper Vedomosti. 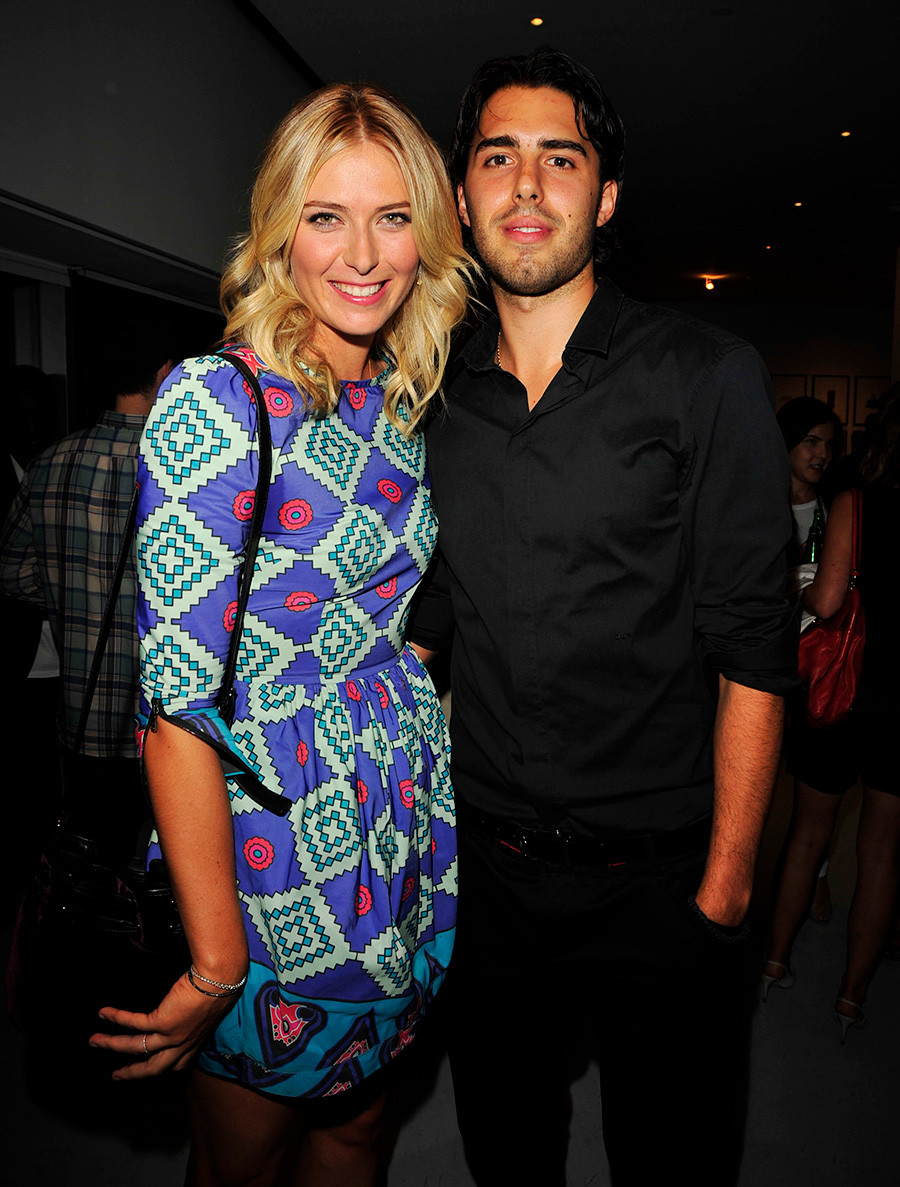 It was then that she met Slovenian basketball player Sasha Vujacic (they got engaged, but broke up in 2012, due to their heavy schedules). Next, Sharapova struck up a relationship with Bulgarian tennis player Grigor Dimitrov, a former boyfriend of Serena Williams. The couple split up in the summer of 2015. 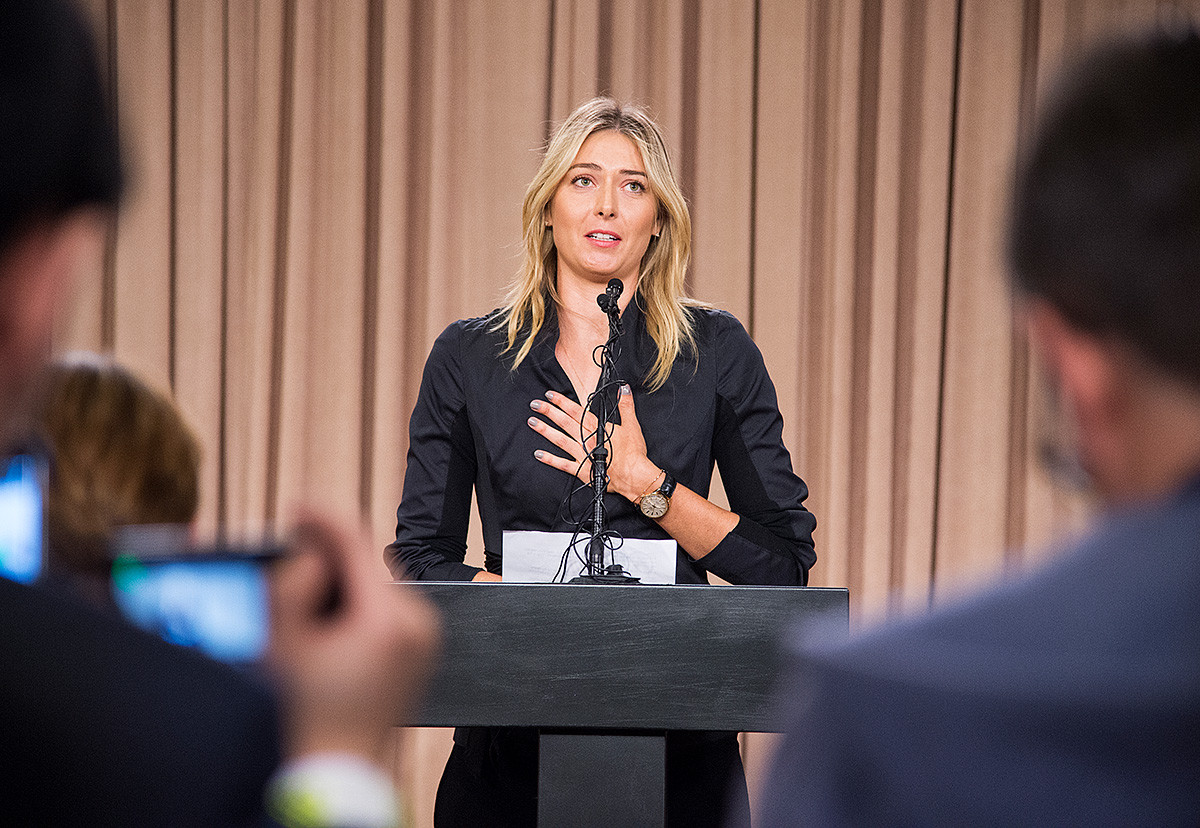 The second major blow to her career came in 2016, when Sharapova confessed to using the banned drug meldonium. The doping scandal scared off most major sponsors, and she was suspended from the sport for 15 months. But she put the time to good use, enrolling as a student at Harvard Business School. 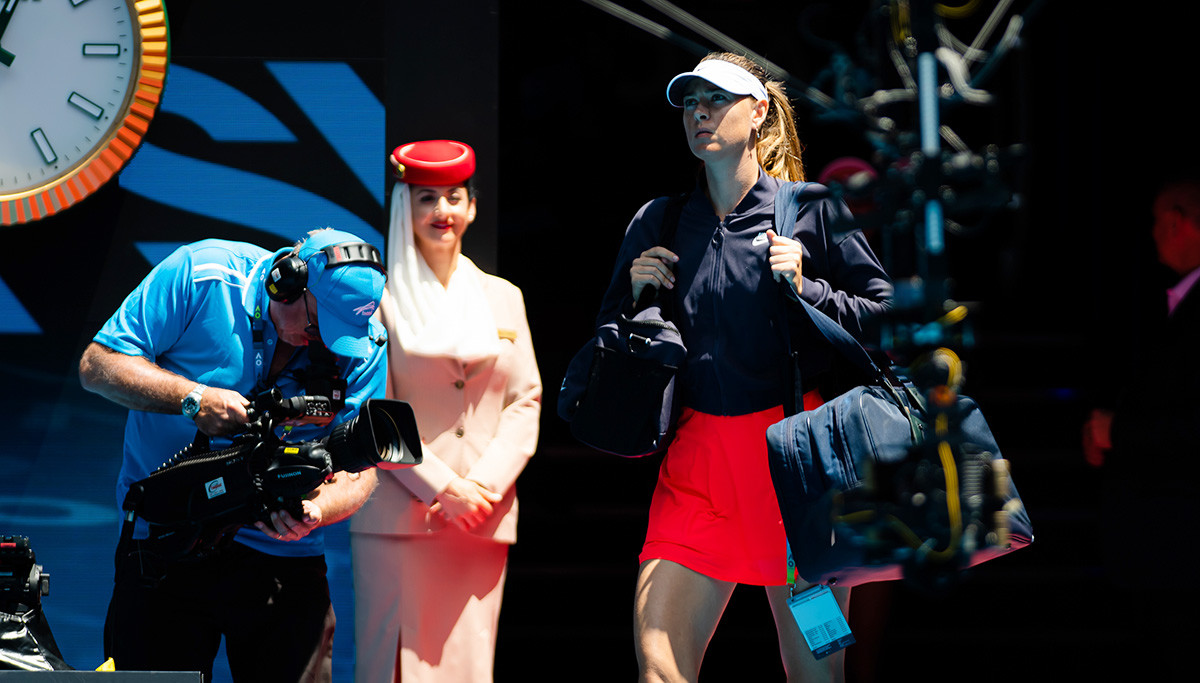 After returning to the sport, she won a WTA tournament and changed coaches, but scored no major victories. Her last match took place on January 21, 2020, at the first Grand Slam tournament of the year, which she lost. 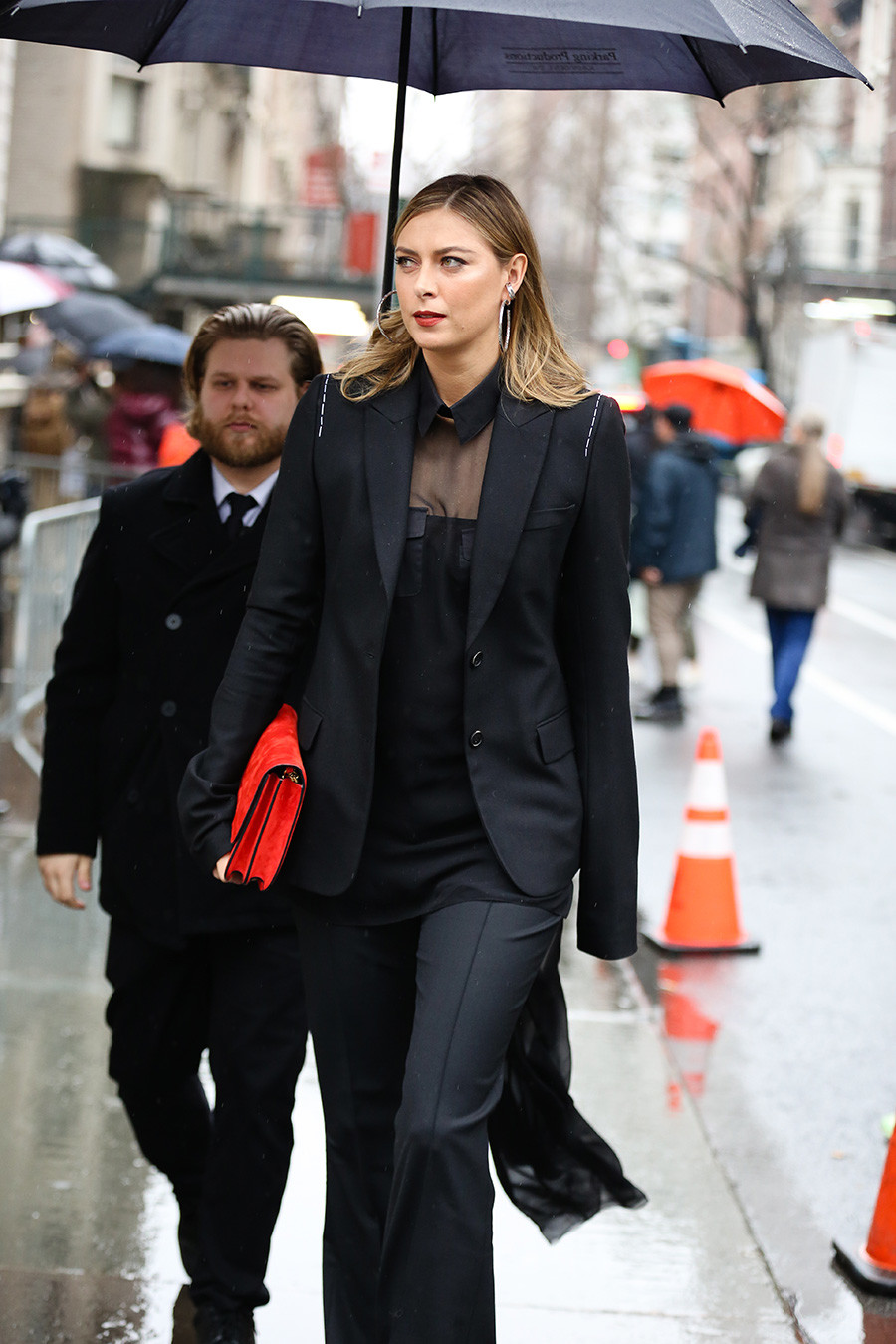 Maria Sharapova is seen outside of the Vera Wang show during New York Fashion Week on February 11, 2020 in New York City

“Looking back now, I realize that tennis has been my mountain. My path has been filled with valleys and detours, but the views from its peak were incredible. After 28 years and five Grand Slam titles, though, I’m ready to scale another mountain — to compete on a different type of terrain,” said Sharapova about her departure. 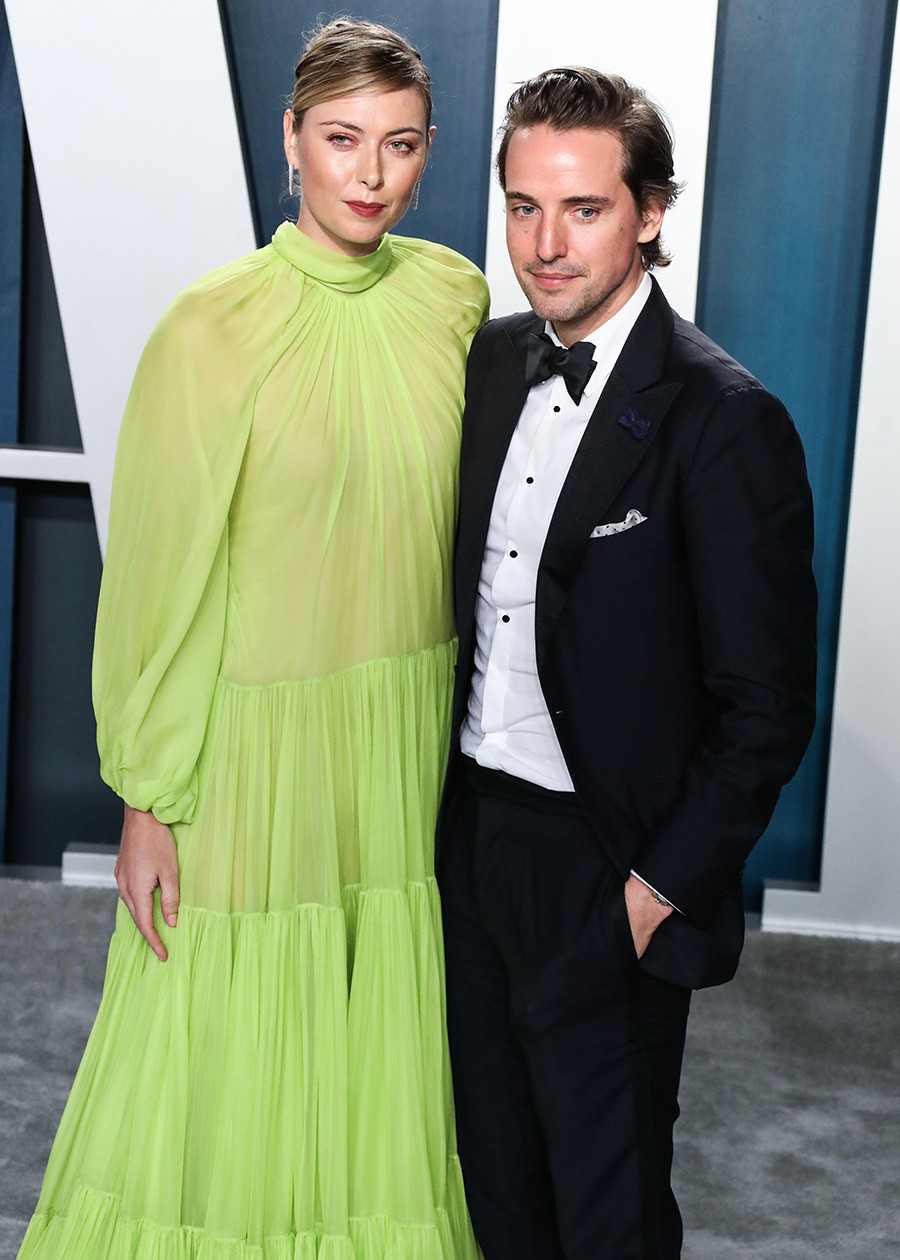 At the end of February 2020, Forbes magazine named Sharapova as the highest paid Russian athlete of the decade, earning $197.8 million. Photos also appeared on Instagram of her wearing an engagement ring — since 2018, she has been dating British millionaire Alexander Gilkes.