How has life in Moscow changed due to coronavirus? 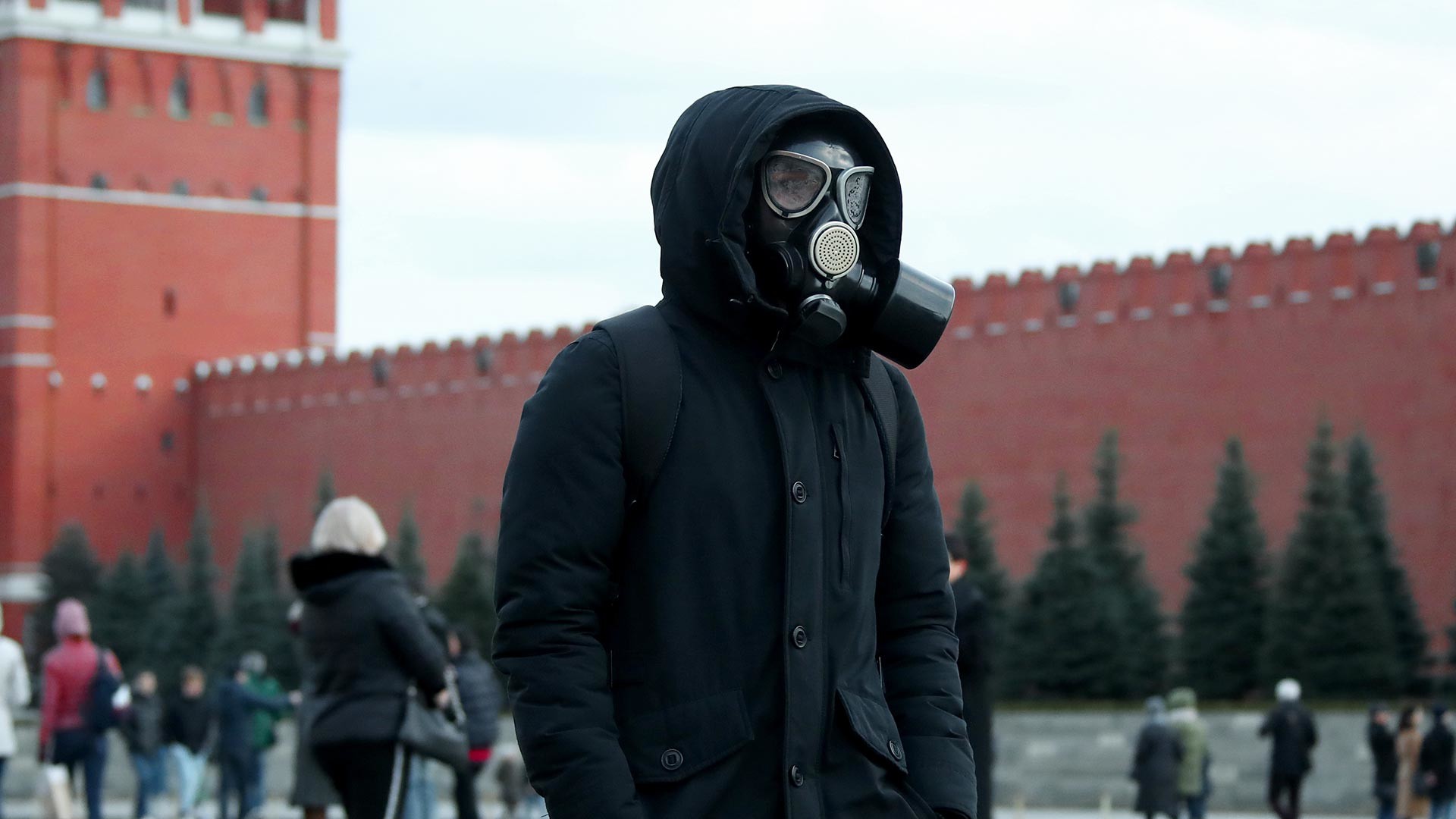 A man in a gas mask walks on Red Square

Valery Sharifulin/TASS
Some companies have ordered part of their employees to work from home. In the meantime, Muscovites are stockpiling essential foods and trying not to leave home unless they have to. And this is far from everything that is happening in Moscow because of the coronavirus outbreak.

Russia is to restrict entry to all foreigners from March 18 to May 1, TASS has reported, citing the Russian cabinet of ministers. The announcement came after the number of people who have tested positive for the novel coronavirus in Russia increased by 30 in a single day, March 16, from 63 to 93 people, as announced by Russian Deputy Prime Minister Tatyana Golikova, who heads the operational headquarters to combat COVID-19, on Monday. According to a Yandex map that tracks the spread of the disease, 53 of those cases were recorded in Moscow and Moscow Region. Moscow Mayor Sergey Sobyanin has introduced new restrictions on residents of the city, while some people have seen their life change dramatically over the past several days.

Working and studying from home, or having your temperature checked at work

Starting from March 16, 2020, Moscow Mayor Sergey Sobyanin has instructed all employers to screen their employees for fever and send those who have high temperature home, says the relevant order issued by the mayor's office. All Moscow schools have been temporarily closed, while university students have switched to distance learning.

Some companies have introduced remote-working arrangements even before these official measures were announced.

“We were told back on March 13 that work in the office was being suspended for at least two to three months until everything settles down. At first everyone was happy, but now it is scary,” a TASS news agency employee told Russia Beyond. 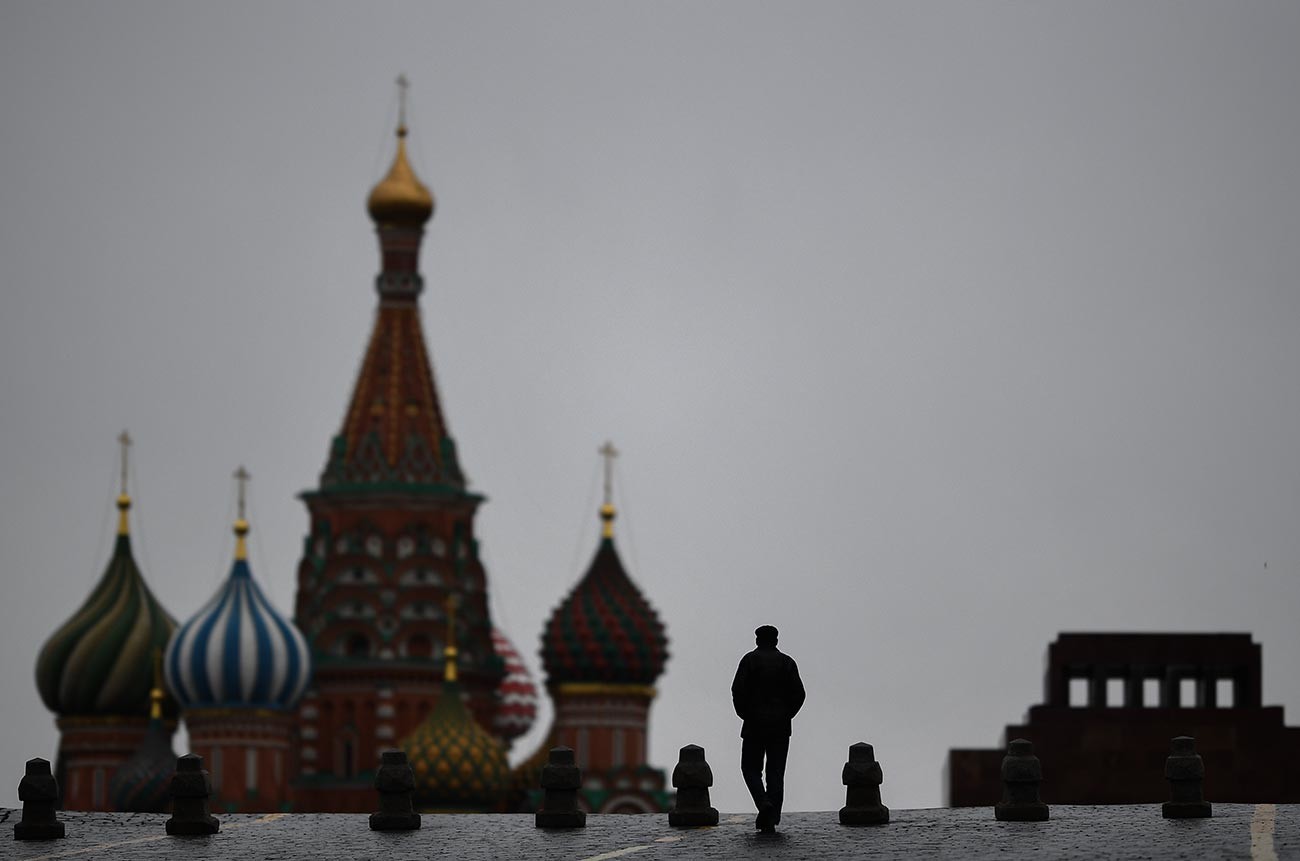 Russian Internet company Mail.ru Group has introduced working from home arrangements for most of its employees, says the company's press service.

“Colleagues will work from home until at least March 31. The office will continue to operate for those who cannot perform their duties remotely, but the canteen, the restaurant, the gym, and the fresh bar will close,” Mail.ru Group said in a statement. Employees who will continue to work in the office will be provided with coupons for taxi to and from the office.

Anna Ustinova, a correspondent with Comnews.ru, has been working remotely since January but has to attend press conferences in person. 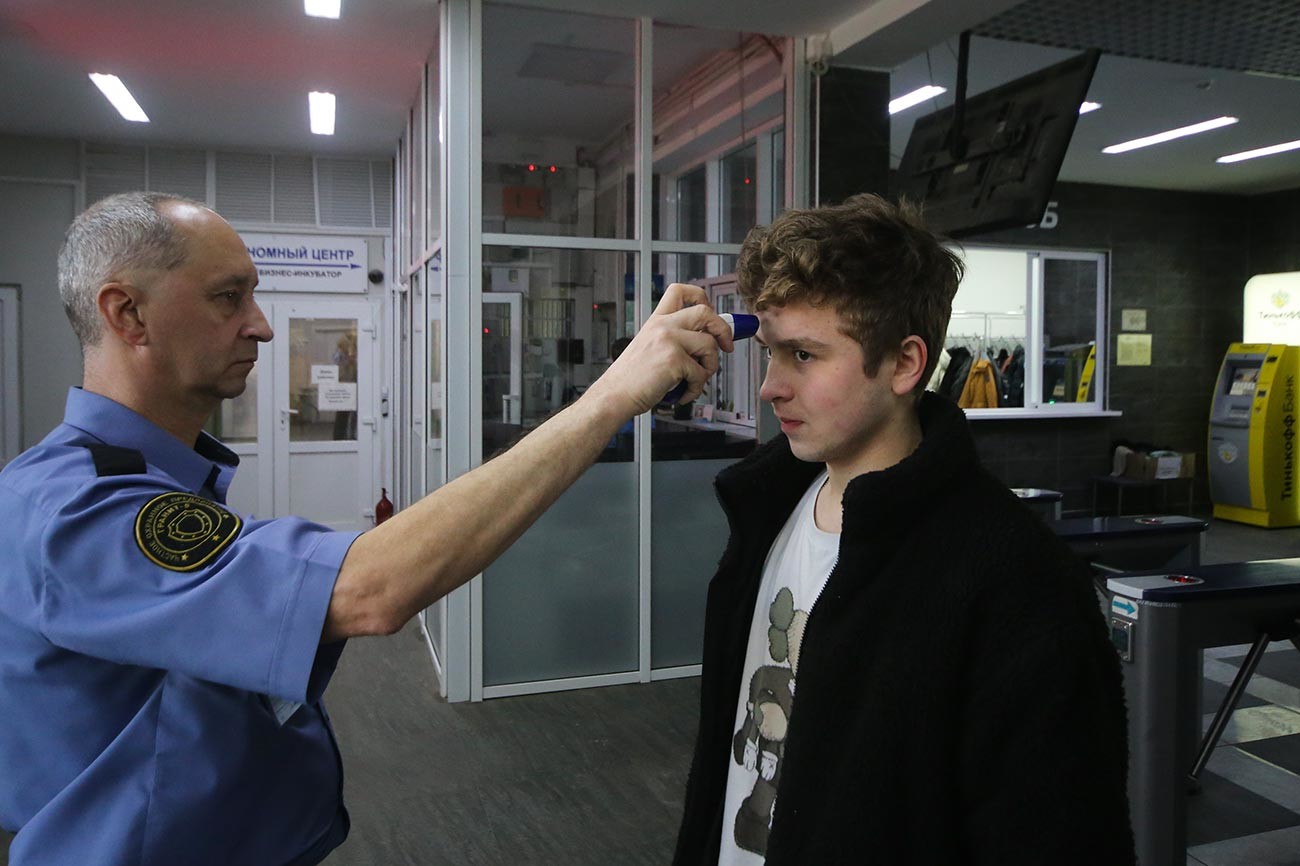 “Generally speaking, I try to avoid public transport - I walk as much as possible. In terms of mass events, I attend only press conferences, which do not involve large crowds, and, as a rule, there are soap and sanitizers at the venues,” she says.

Alexander, a 29-year-old analyst with a state-owned company, woke up on March 16 with a runny nose and a fever, but when he came into work, there were no preventive measures in sight.

“They didn’t even look at me in the office, nobody took my temperature. They told me to get down to work, saying that when people work from home, their performance suffers. I'll take sick leave tomorrow, health is more important,” says Alexander.

Empty shelves in supermarkets and growing demand for home delivery

Muscovites have begun stockpiling salt, sugar, cereals and hygiene products. Shelves in some Moscow supermarkets now look like this:

“There was plenty of toilet paper, some antiseptic hand gel left, but canned meat and cereals have almost disappeared! It was the same in Auchan last night! Canned food is fast disappearing too! Friends, get ready, keep well!” one shopper wrote on Instagram.

The Russian Ministry of Industry and Trade said that shelves were empty because supermarket staff were not always able to restock them quickly enough, while retail chains had already increased orders from suppliers, so there was no reason to expect any shortages.

At the same time, many Muscovites have stopped going to the shops altogether, switching instead to home delivery. 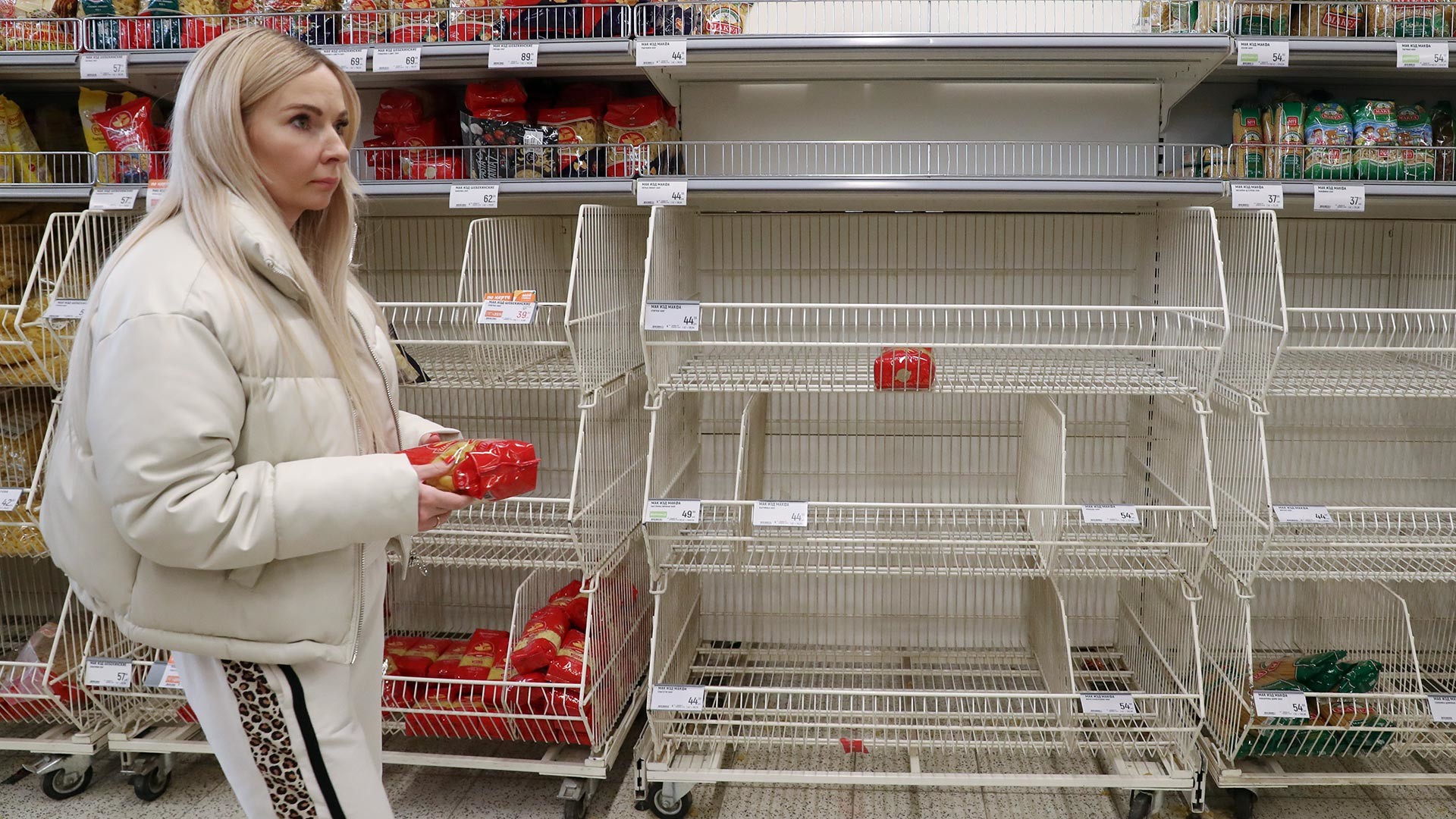 “For example, today, on Monday, a box with cereals was delivered to me from Ozon. The courier just left it at the door, rang the bell and left. I am more than happy with such contactless delivery,” says Natalya, a 24-year-old resident of Moscow.

Muscovite Irina Sablinskaya prefers home delivery too. “I need one sanitizer a week. My last one ended, and I could not buy another one in any shop or pharmacy. So, I had to order it online,” she explains.

On March 16, 24-year-old Tatyana Morozova from Moscow woke up with a cough and a runny nose. She wanted to call in a doctor and be tested for coronavirus - just in case - but she was unable to get through to the nearest clinic: they were just not picking up. The health care website, where you could sign up for an appointment online, was down, and all the operators on the health hotline were engaged. Several hours later, when the girl was already running a fever, she finally managed to call in a doctor.

“He listened to my lungs, checked my throat, asked if I had been in contact with any foreigners in recent weeks or been abroad. He prescribed me aspirin and paracetamol and told me to drink more water, but refused to take any tests,” claims Tatyana. 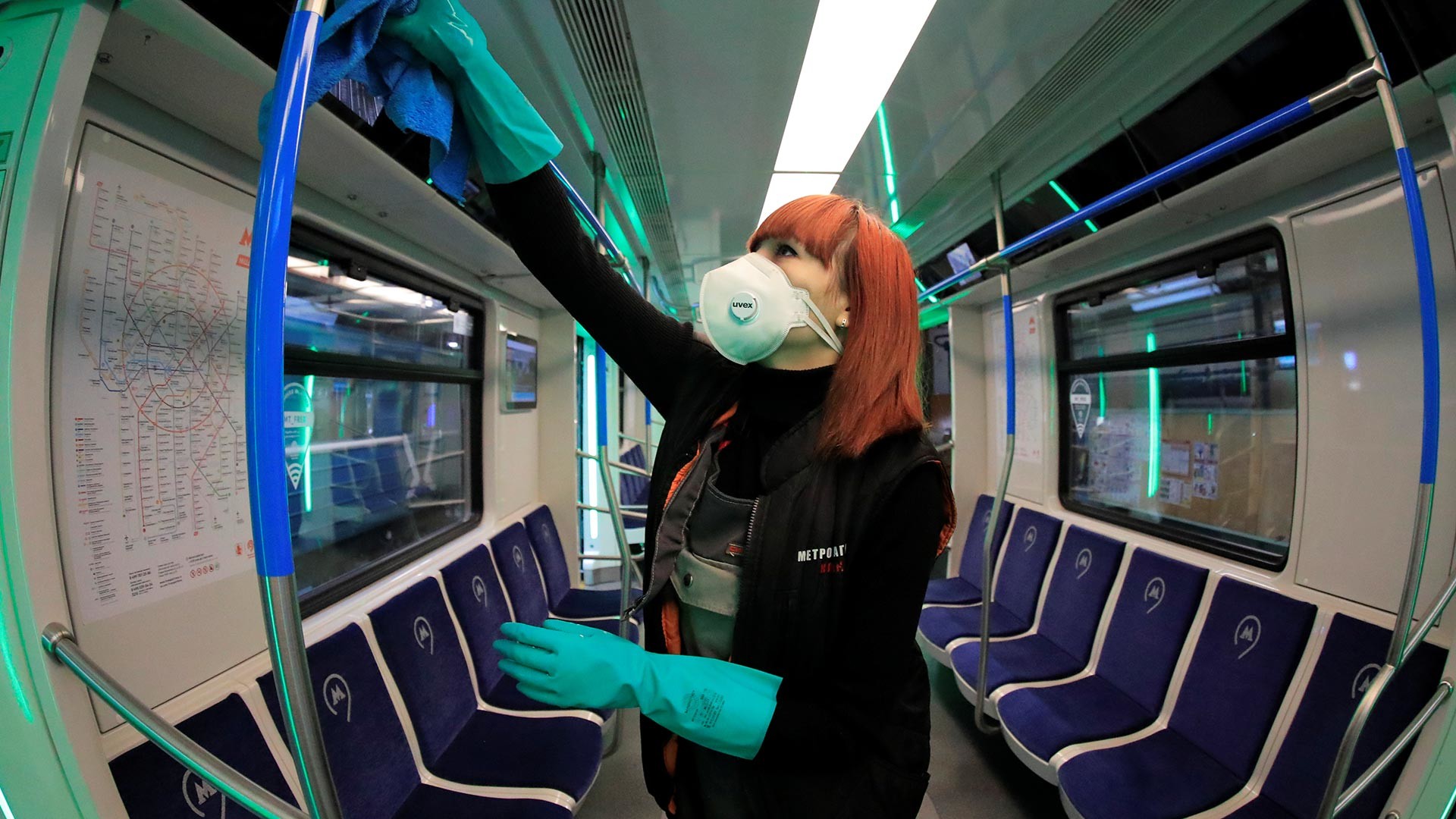 On the same day, Moscow Mayor Sergey Sobyanin instructed medical institutions to have all patients with respiratory symptoms tested for coronavirus.

“Each new case requires hospitalization not only of the sick person, but also of all the people who were in contact with them, if they show the slightest signs of an acute respiratory viral infection,” Sobyanin wrote in his blog.

In addition, Moscow has allocated a site for the construction of a new hospital for those infected with coronavirus. Residents of Moscow who have recently arrived from Europe have been ordered to self-isolate at home. The same restrictions apply to their family members.

The mayor of Moscow has banned, until April 10, any mass events involving more than 50 people.

A couple of days prior to that, the Moscow Garage Museum had already announced a temporary closure. The Culture Ministry has introduced a Russia-wide ban on visiting libraries, RIA Novosti reports.

The Vakhtangov and Sovremennik theaters have announced that all their performances from March 17 to April 10 will be cancelled. The Jewish Museum, the Museum of Russian Impressionism and the Gulag History Museum remain open, but have cancelled all events, the Vedomosti newspaper reports.

To keep Russians entertained in self-isolation, Russian online cinemas have opened free access to movies and TV shows. The Pushkin Museum of Fine Arts will be moving its conferences and lectures online, reports Rossiyskaya Gazeta, citing the museum. The Pushkin Museum, the Hermitage and the Russian Museum in St. Petersburg also offer virtual tours. 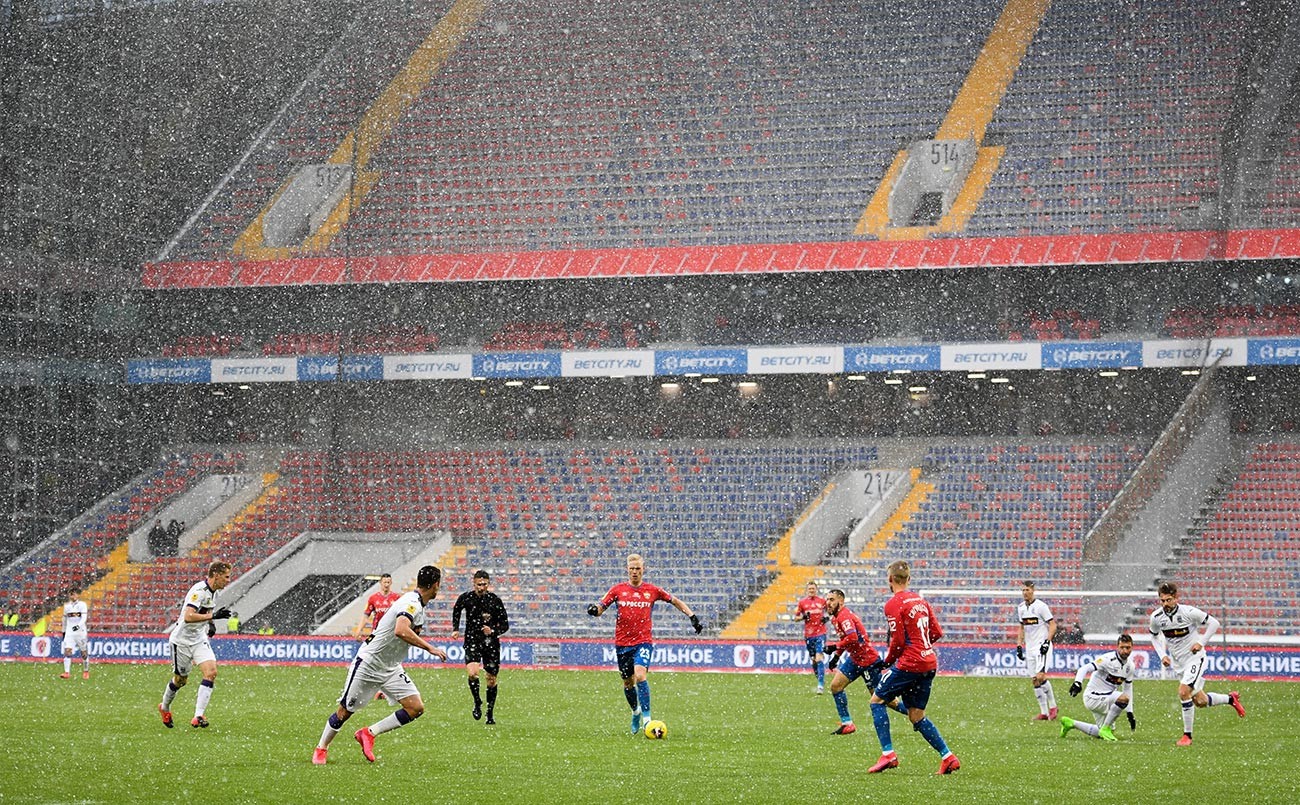 It is not yet clear whether Moscow will be ordering other crowded places - cinemas, restaurants, bars and shopping centers – to close, too. Alexei, an 18-year-old student from Moscow, says he has no intention of giving up his weekend visits to the bars.

“You can’t deprive people of their last joy, otherwise people risk dying of boredom more than of coronavirus,” he argues.

For those who miss their visits to bars because of the quarantine, the Russian agency shishki.collective has launched an international online bar, Stay The F*ck Home Bar. It consists of a number of ‘rooms’ on the Whereby video conferencing service, each able to accommodate from four to 12 people. You can invite a friend to any of them, by copying a special link, to have a drink together, to toast each other and to chat.

Other Muscovites have long been ready for complete self-isolation.

“I’ve been trying to stay at home for two weeks already,” says Natalia, a Russian Railways employee. “I have long stocked up on food, I have bought a protective mask. I couldn’t care less about clubs and all that. It’s better to wait it all out. Everything will be fine. I hope."