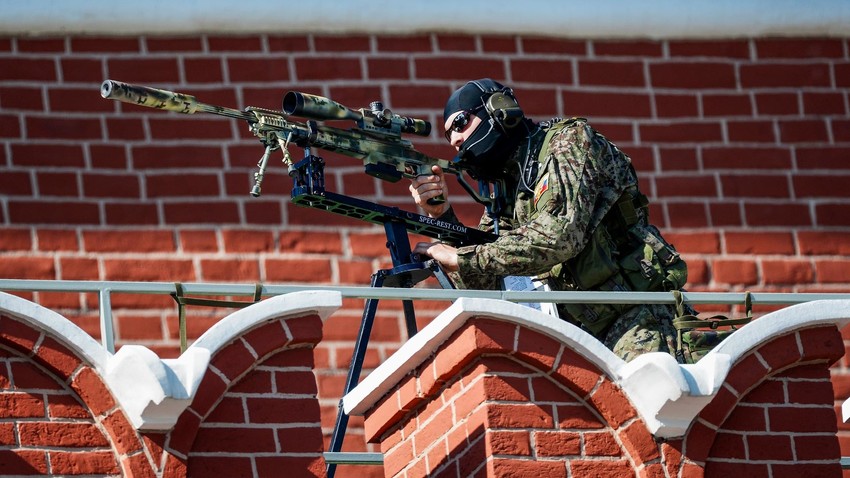 Ilya Pitalev/Sputnik
We sat down with a former special operations division sniper to get the lowdown on what the job entails, and dispel any myths surrounding it.

How to get into Spetsnaz and become a professional sniper

In order to be admitted to the Russian special forces division and qualify for counter-terrorism operations, you will require special training. Ideally, it starts with a specialized higher education institution, giving you the opportunity to spend five years training with the Spetsnaz on Russian territory.

If you manage not to “burn out” - or change your mind about wanting a cushy office job, a nice suit and shiny shoes at army headquarters, you can then submit an application to the Special Operations Forces (SOF: an assorited mixture of specialists from Russia’s elite special forces divisions - the GRU, SVR, FSB, FSO and others). Human Resources assesses each application and offers the applicant the chance to pass a fitness test (you can read more on the selection process here). 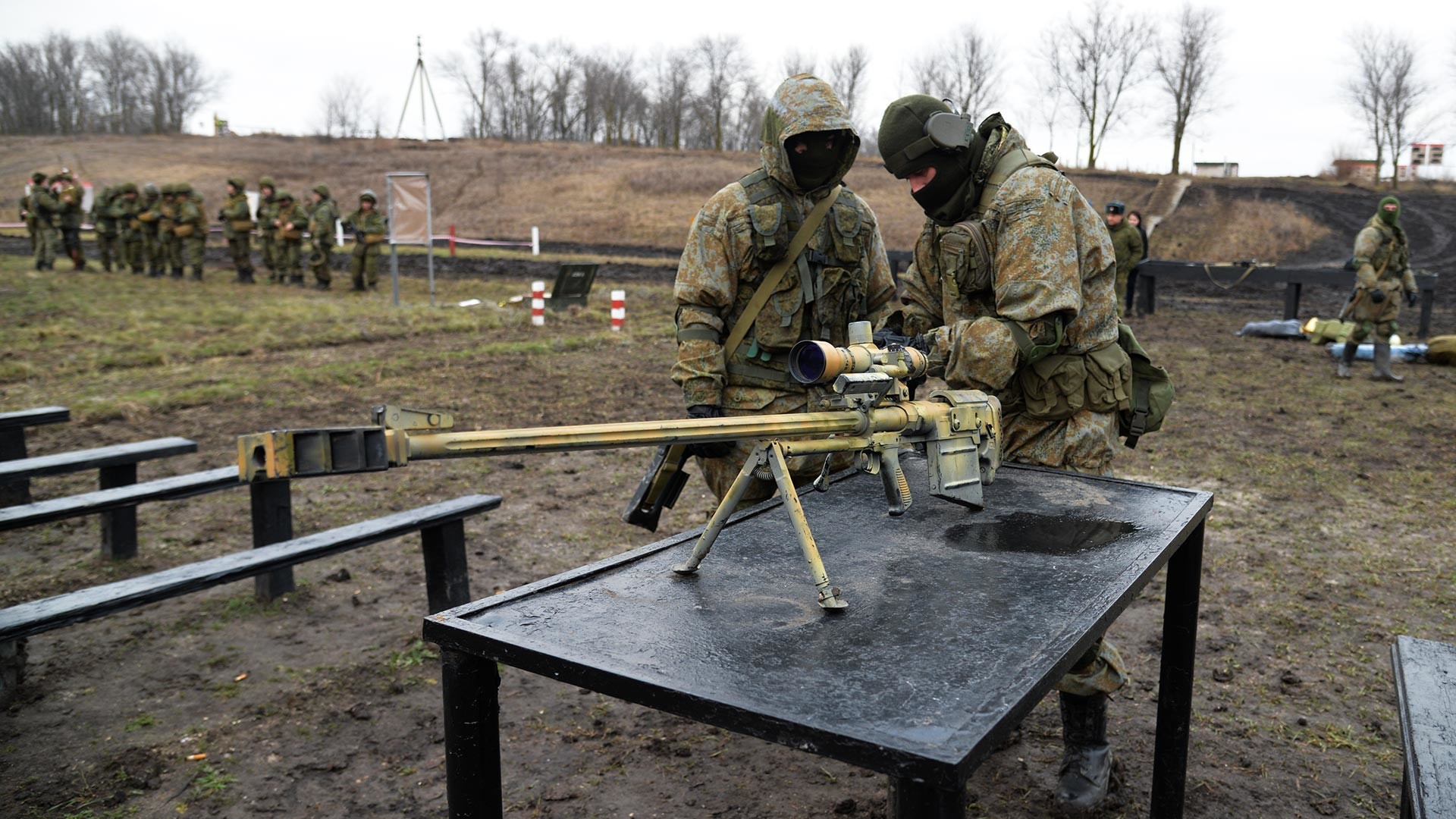 Successful applicants must go through a medical and psychological checkup, and, once you turn 27 (in an ideal scenario, where you pass every exam on your first try), you become a member of the SOF.

Should you then decide to change your qualification to sniper, you will again have to pass a separate series of psychological tests to establish your fitness for that specific role. Your shooting skill level actually plays a secondary role here. You can be taught that part. What matters is the ability to focus and make active use of your brain.

Skills of a modern sniper

You must become an expert in ballistics, as you’ll have to work with the elements, such as wind (calculating the speed and the resulting deviations in the trajectory of a bullet during flight), as well as hit moving targets, and additionally being able to do it all at night, in pitch blackness.

The lion’s share of a sniper’s work takes place after midnight. You must be a capable user of the latest technologies and establish targets on the ground in conditions when the enemy is actively hunting and trying to kill you. A sniper’s job essentially resembles a hunt: one side “hunts” the other. 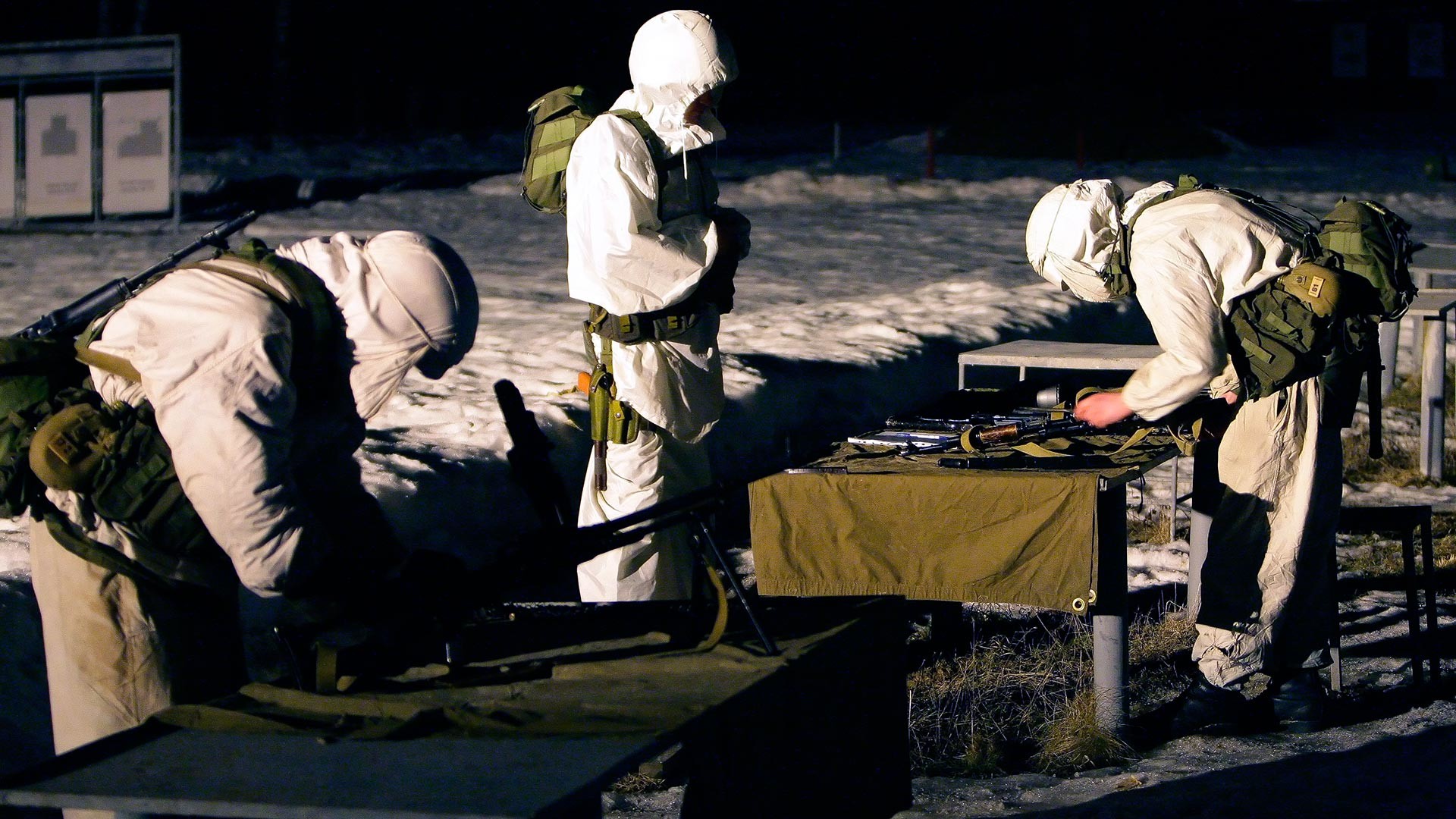 Aside from being an expert with a sniper rifle, your skills must also extend to carbines and handguns. For example, your objective is to take up a position in enemy territory. Support will always be minimal. Don’t harbor any illusions about being dropped off by helicopter behind enemy lines, and then picked up at the same spot - no. You’ll have to cross the enemy line on your own two feet, take up a position without attracting attention, complete the objective and return. And all of these auxiliary tasks you’ll have to do alone or as part of a sniper squad eliminating enemies in close combat with only the use of handguns and/or carbines.

Depending on the mission, a squad can consist of up to 10 men: a leader, spotters, shooters, an operator and a couple of operatives providing cover.

There are two branches of sniper training - police and military. Put simply - urban or front line operations. Police snipers must be able to hit a 20-30 cm target (the size of a standard human head) at 300 meters. This exercise usually involves having to conduct a headshot on a terrorist dummy using a human shield.

A military sniper, on the other hand, is taught to hit targets a kilometer away. The task here is simply to hit the target, as the caliber required for such distances ensures that body parts will be torn off on impact, ensuring an enemy’s death through loss of blood, in any scenario. 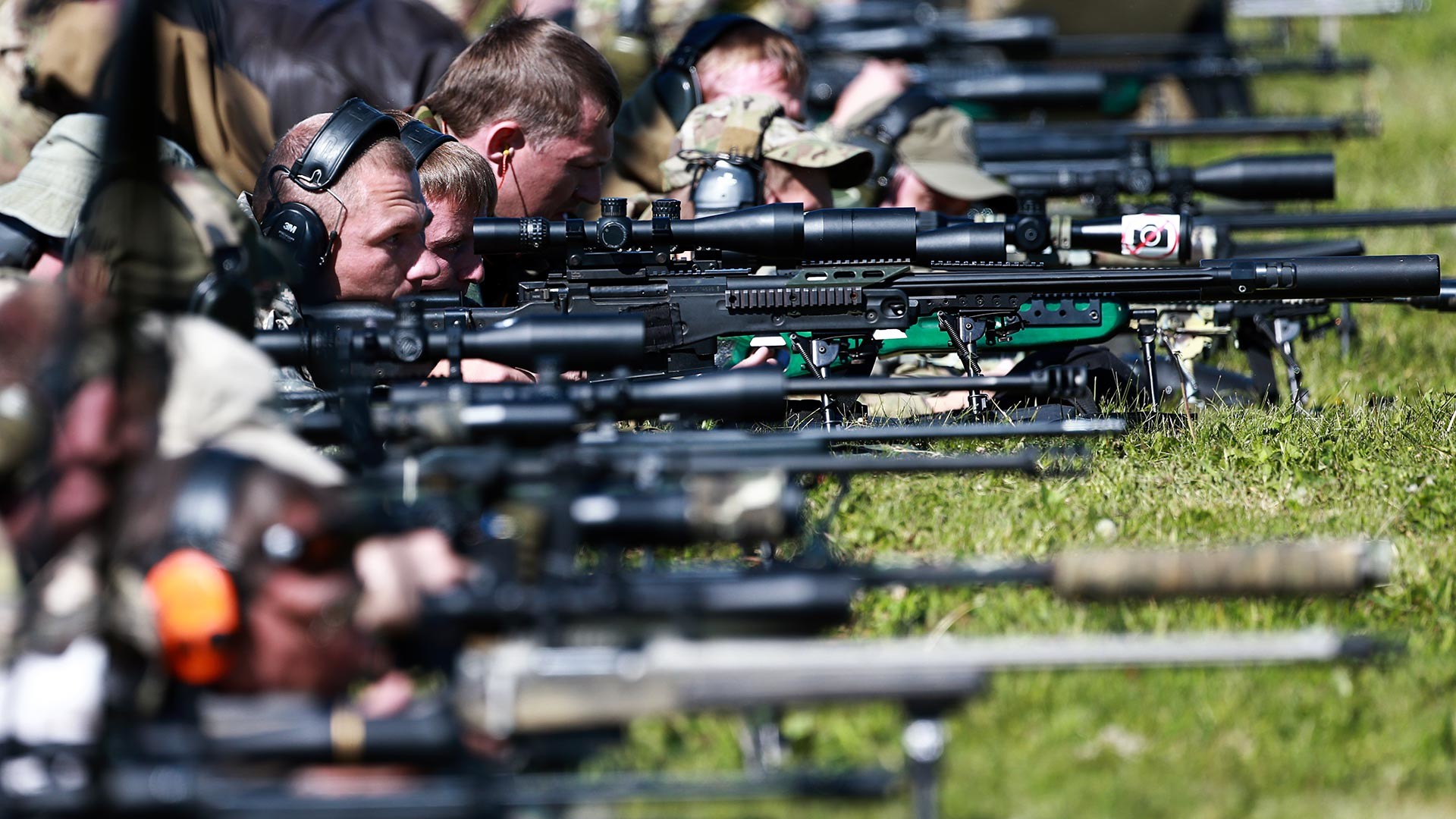 Guarding the President or fighting terrorists

If you pass your tests with flying colors, securing a spot with the SOF by the time you turn 27, you’ll be sent for additional sniper training, after which you will be ready to be sent off on assignments by 30. Although, in all likelihood, you’ll probably be older.

The candidate needs to mature. The sniper wins by way of cunning and skill - not muscles and bravado. With age, people become calmer and learn to assess the battlefield on a situational basis. And, on top of that, to not overestimate themselves.

A sniper’s job requires battle-readiness only in specific, difficult situations, with no time left to think and the need to act fast. For example, if a comrade is wounded or when your cover is blown and you’re required to make an immediate escape.

Deciding whom to send where and when 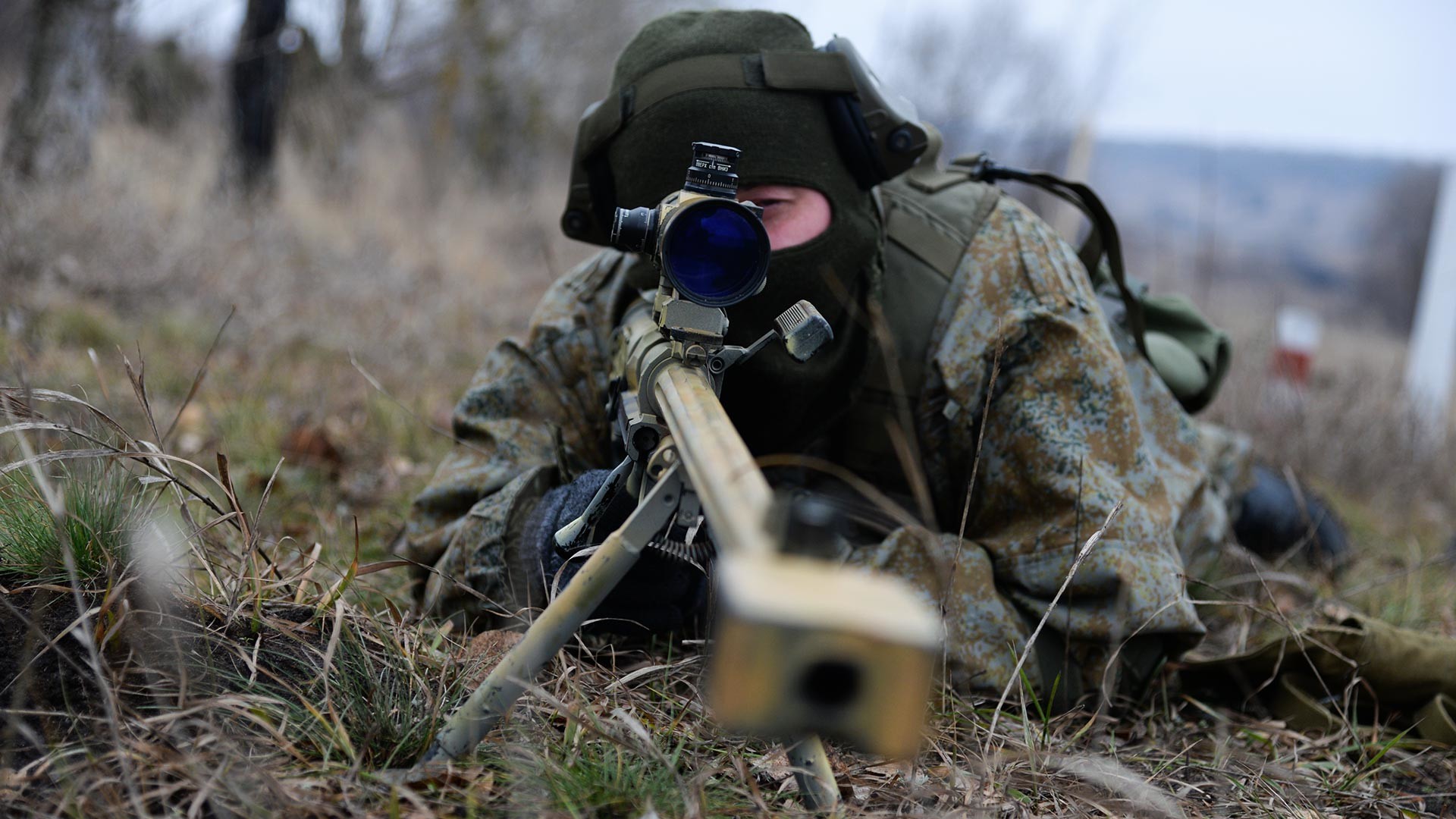 A sniper’s job is governed by federal law in Russia. In our line of work, the enemy isn’t discriminated upon by age, sex, race or skin color. Put simply, if, during a mission, our group encounters a child or a pregnant woman with a rifle or a grenade, the shooter will take out the target without a second’s thought.

Terrorists are picked out of the crowd by both snipers positioned around the perimeter, as well as agents inserted into the crowd. The target’s weapons or explosives must be determined on first inspection. The threat must then be neutralized quietly by the agents, without attracting attention and with a view to avoiding panic. In the event that this cannot be accomplished, a sniper squad is called upon.

The decision to take or not take a shot must be taken independently, as the group leader isn’t always in the best position to assess the situation. Nobody is going to be firing on targets indiscriminately.

For instance, a terrorist intends to detonate an explosive in a crowd. The squad weeds them out and makes the decision to neutralize them. Moreover, the objective isn’t always to kill, but to immobilize the target, so that it doesn’t get the opportunity to activate the detonator or fire a weapon on civilians.

A guaranteed kill is always a headshot: immediate immobilization and death. The stories you hear about hitting the heart and other organs - those are all silly. However, if the target is mobile, especially in a crowd, the sniper must determine the correct tools to use, so as to avoid hitting bystanders.

The moral dilemma of taking a human life 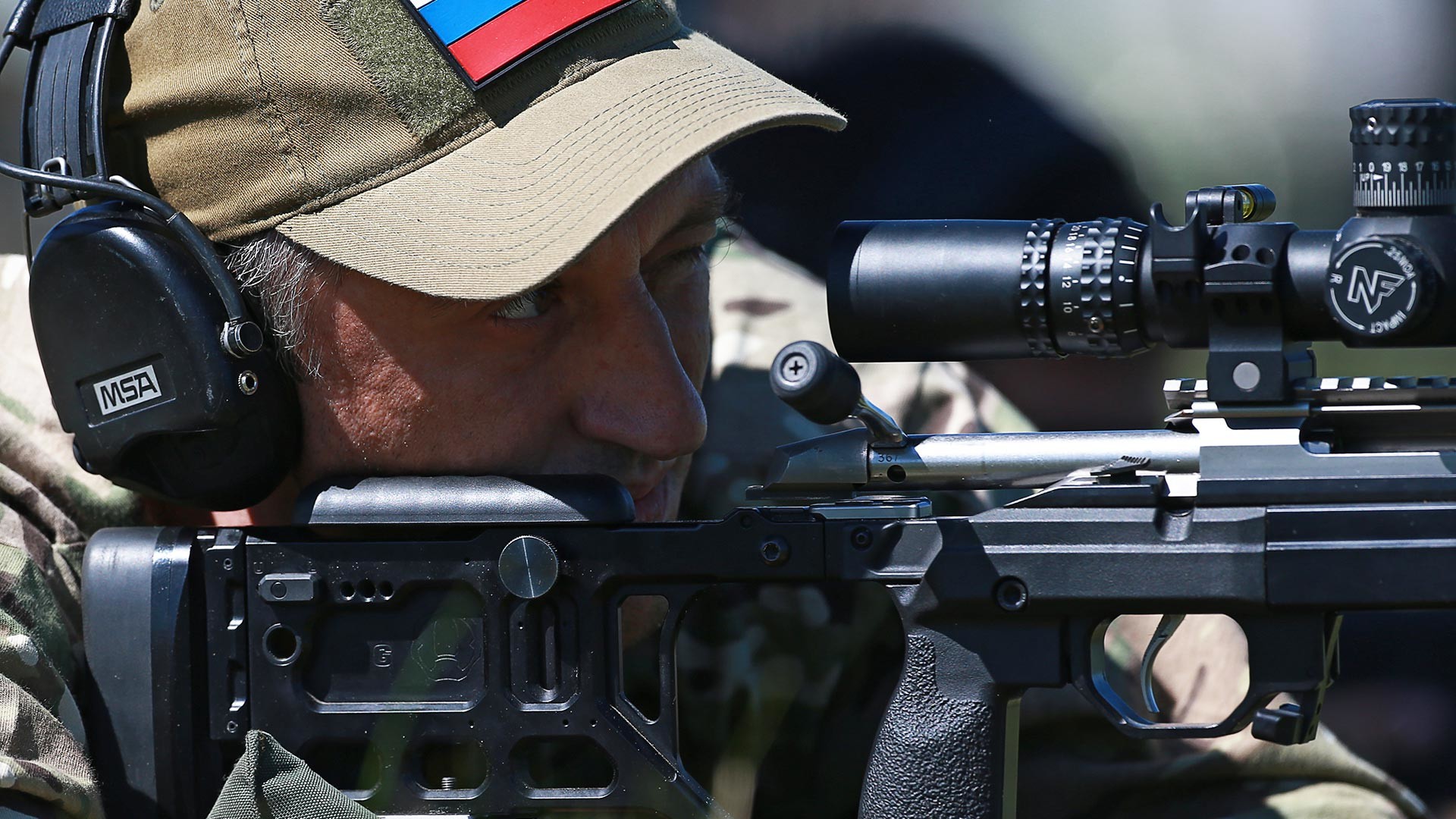 No. Everything you see in movies about the protagonist’s psychological breakdowns and mental suffering are all lies. Only those with specific training are accepted into this line of work. We sleep peacefully at night and don’t endure any sort of emotional suffering.

And all these stories about Chris Kyle (the legendary U.S. sniper with 255 confirmed kills in Iraq) are dramatized for the screen. All army and police snipers enjoy normal lives even after taking other people’s lives.

The cost of failure 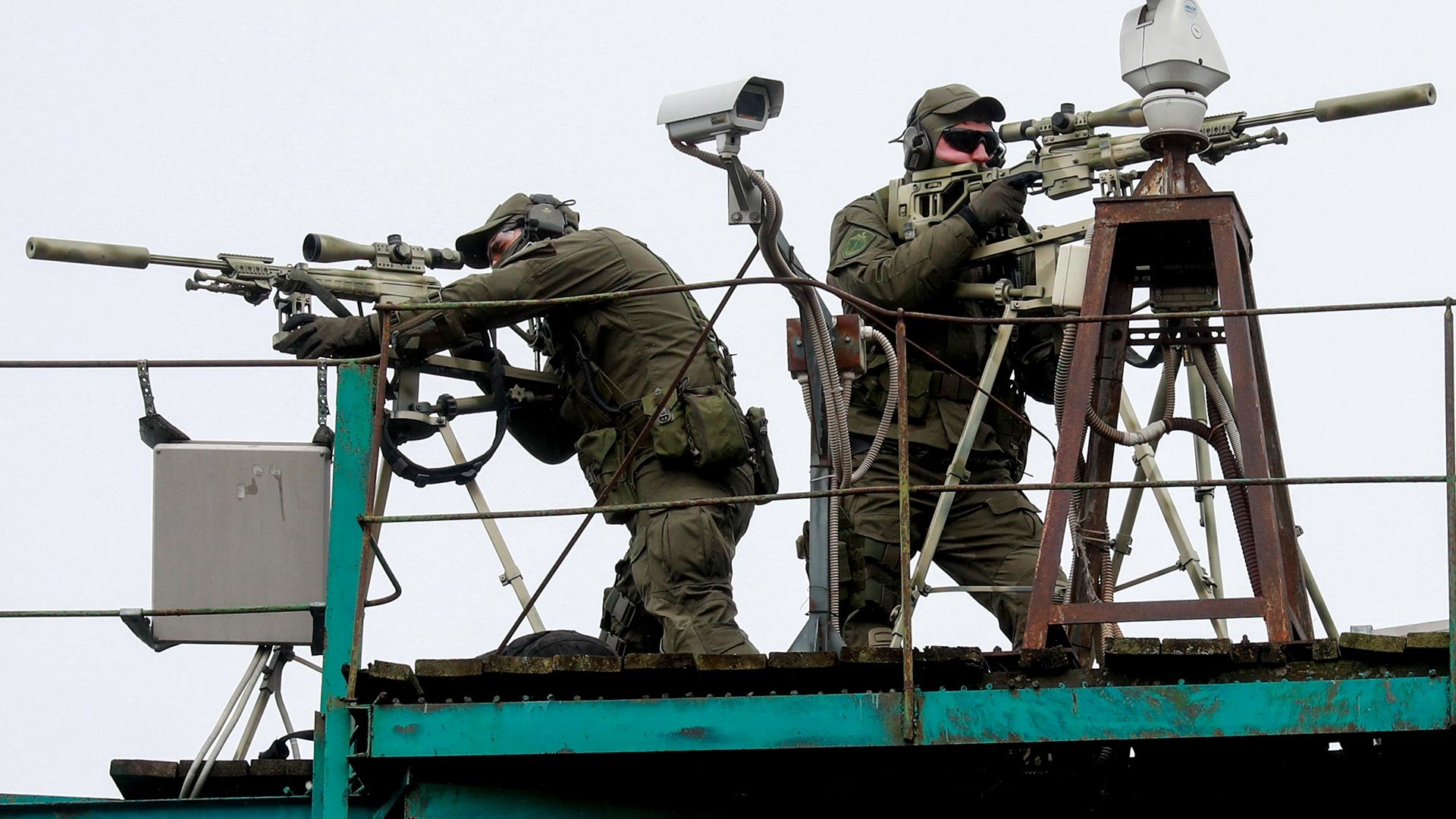 If you commit a mistake and kill a civilian, you’ll be court-martialed, where an investigation will be carried out in line with your country’s laws. In Russia, a mistake like that could get you 15 years.

It must be added, however, that each individual case hinges upon the sniper’s particular division and the situation on the ground at the time of the incident.

The salary of a modern day sniper

It all depends on the division and the difficulty level involved.

Everyone gets different per diems. Sometimes, individuals with different divisions may end up on the same mission, performing the same tasks, and may receive a bonus of $3,000-$30,000 upon their return home. It all depends on where you’re serving. But it’s not the money that attracts people to this job - it’s the action. We just really enjoy the process.