How Russians deal with over-curious bears 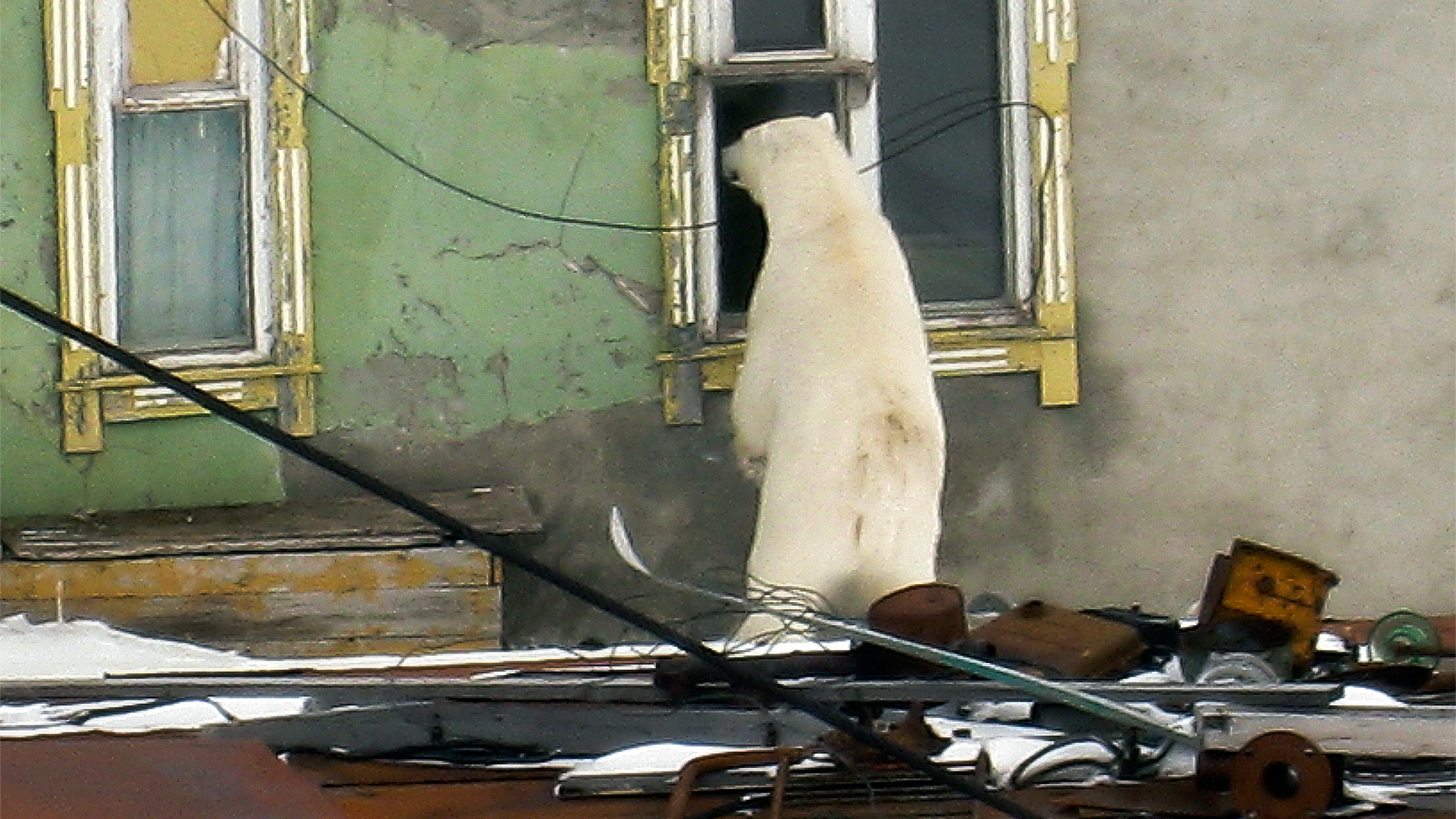 Bear in the Amderma village

WWF Russia
Imagine you leave your apartment and encounter a huge polar bear on the landing. Who you gonna call? The Bear Patrol, of course — a body specially set up to rescue people from wild animals. And vice versa.

In early May, in the small village of Ust-Kara (population no more than 500) on the Kara Sea, the temperature was still stubbornly refusing to rise above zero. The handful of flimsy two-storey apartment blocks were snugly wrapped in high snowdrifts. On the second floor of one of them, Evgenia Amelychkina, head of the local village council, was sound asleep. At 6 am, she was woken by a phone call. Ready to curse the evil sleep-disturbers, she didn’t have time to get the words out.

“Evgenia Yuvinalievna, there’s a bear on the roof, just don’t panic!” shouted a neighbor into her receiver. Hearing the word “panic” only made her panic even more.

According to World Wide Fund (WWF) Russia project coordinator Sergey Uvarov, the young bear had climbed up a snowdrift and onto Amelichkina’s roof. Fortunately, no residents was injured, and Evgenia promptly called the special patrol, who used flares and snowmobiles to drive the animal away from the village. 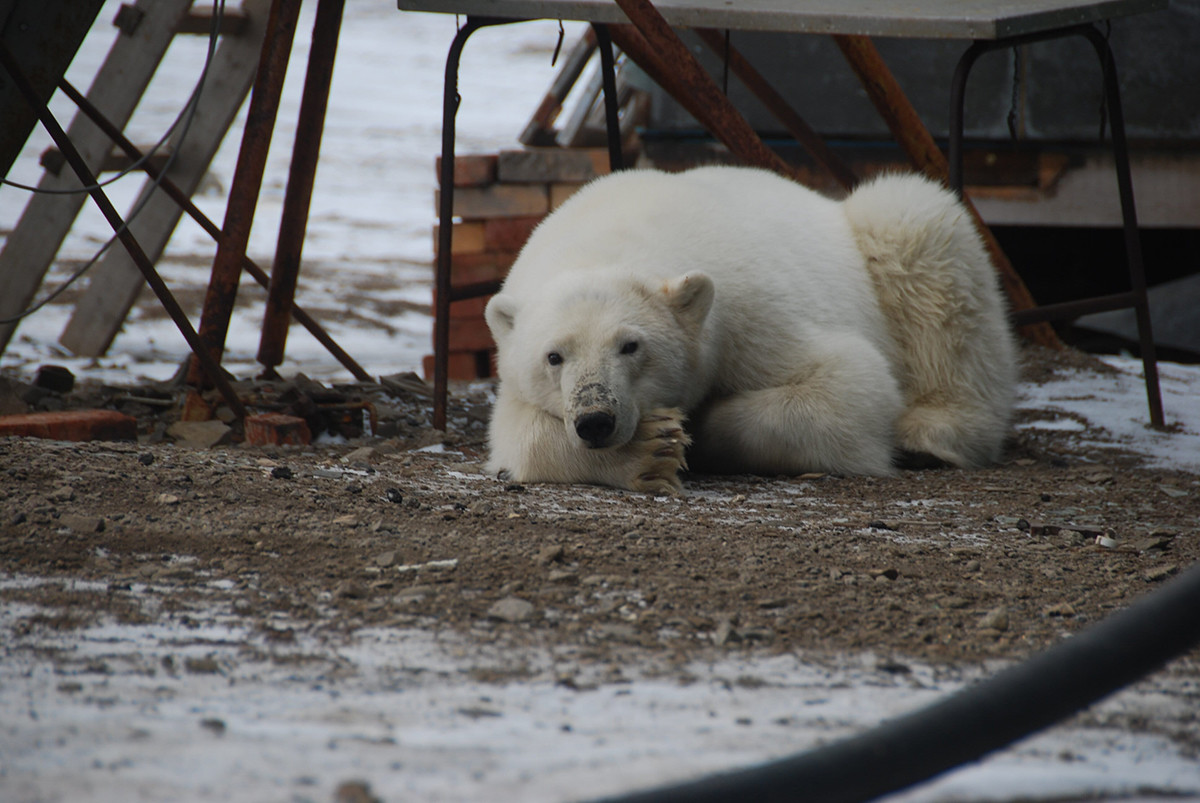 This is no isolated incident. For residents of settlements in the Nenets Autonomous Okrug (where Ust-Kara is located), Chukotka, and other Arctic regions, encounters with bears are commonplace and becoming more frequent.

“You can run into a bear when taking out the trash or taking the children to school. You might not even be able to leave home because there’s a huge beast waiting by the entrance,” explains Uvarov.

It was for situations such as these that WWF Russia created the Bear Patrol — a group of local volunteers who prevent humans and bears coming into contact, and escort the animals back to their natural habitat.

How do these volunteers keep Russia’s northernmost settlements safe, and why is their workload increasing every year?

The first Bear Patrol brigade was set up in 2006 in a village in Chukotka, says WWF Russia director Dmitry Gorshkov. He says that a total of eight Bear Patrol teams operate in the Arctic: two each in Chukotka and Yakutia, and four in the Nenets Autonomous District. Each patrol consists of 3-4 people.

“Basically, the patrols chase bears away from settlements, and notify local residents that the animals might appear and about safety measures they need to take. They also monitor the bears’ condition, as well as their dens and food supplies, which include walruses,” Gorshkov says.

Bears are seen around settlements from autumn until late spring, explains Uvarov. In the fall, when the ice freezes, the bears move along the landfast ice. In the spring, the snow begins to melt, and they relocate to ice edges near the coast, where seals, their main food, usually live.

Due to global warming, the ice is becoming thinner, and the ​​ice floes are smaller. This forces the bears to go ashore in search of food. They are attracted to the smell of meat and fish emanating from garbage heaps. 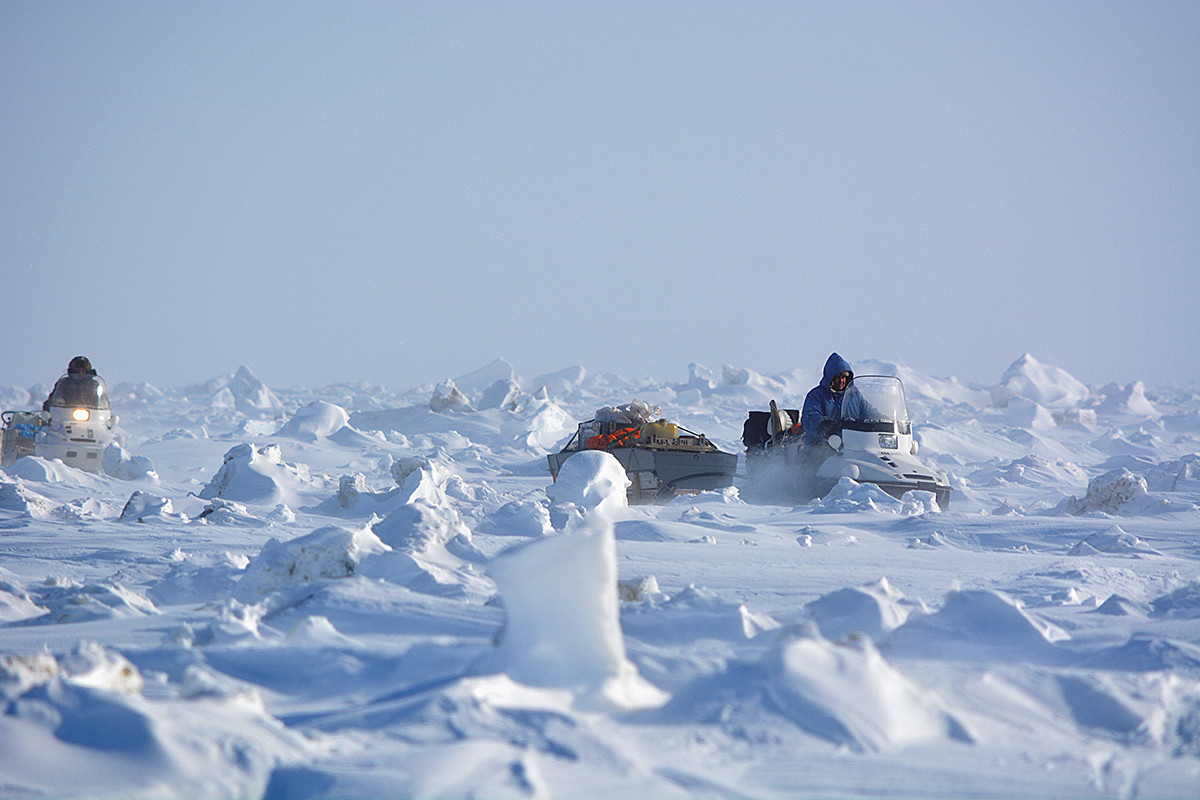 “The melting ice means that the bears are forced to cross a large body of water to get to the shore. They arrive on land hungry, exhausted, angry, and sometimes wounded, for example, if a female had to defend her offspring. In this case, the bear is dangerous and can see humans as prey,” says Uvarov.

Very young bears weighing 50–100 kg can wander into settlements out of curiosity. They don’t pose a threat until the mother comes looking for them — she can attack people to protect her cubs. 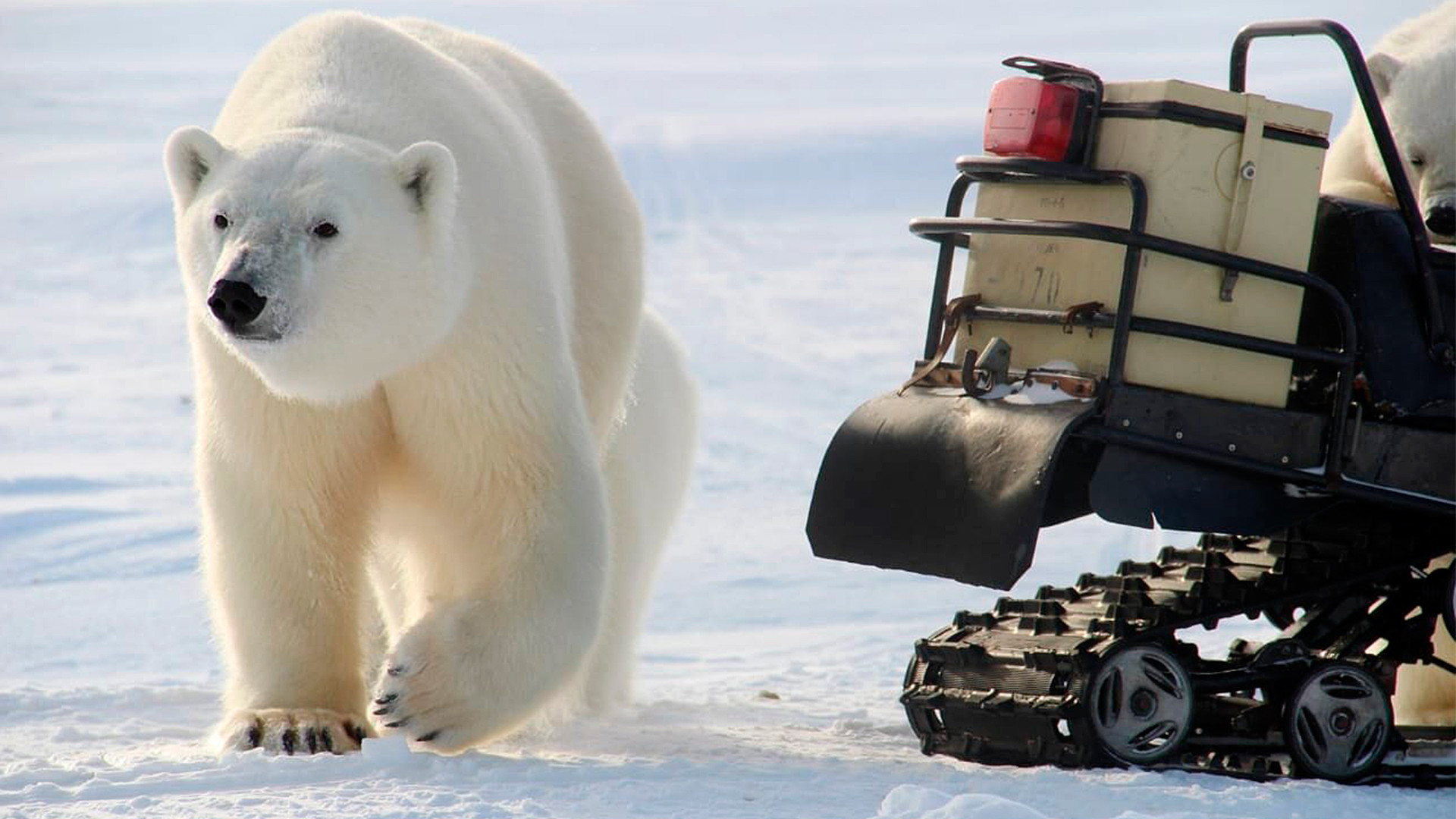 Bears can be driven out using loud noises or bright lights, says Uvarov, for which flare guns are most commonly used. The unpleasant noise of a snowmobile engine also helps chase them away.

“It’s very important to scare away the animal using a method where a human silhouette is visible — so that it learns to be afraid of people. The animals are escorted to the sea, and then left alone,” explains Uvarov.

Tatiana Minenko, head of the bear patrol in the village of Ryrkaipiy in Chukotka, joined the team in 2007. She started observing bears, whales, and walruses in early childhood, and has worked as a reindeer herder and seamstress, making clothes from animal hides.

Asked how many bears she has seen in her life, she quickly loses count. Any fear she once had of them is long gone, and today she frightens them using only throaty cries and swings of an ancestral spear. However, an incident in 2019 shocked even her.

“At 10pm I was doing my evening round. It’s always so quiet, you can’t even hear any dogs,” says Tatiana in a slightly trembling voice, holding the camera. In the frame are several two-storey houses, snowy streets, darkness, and deafening silence. 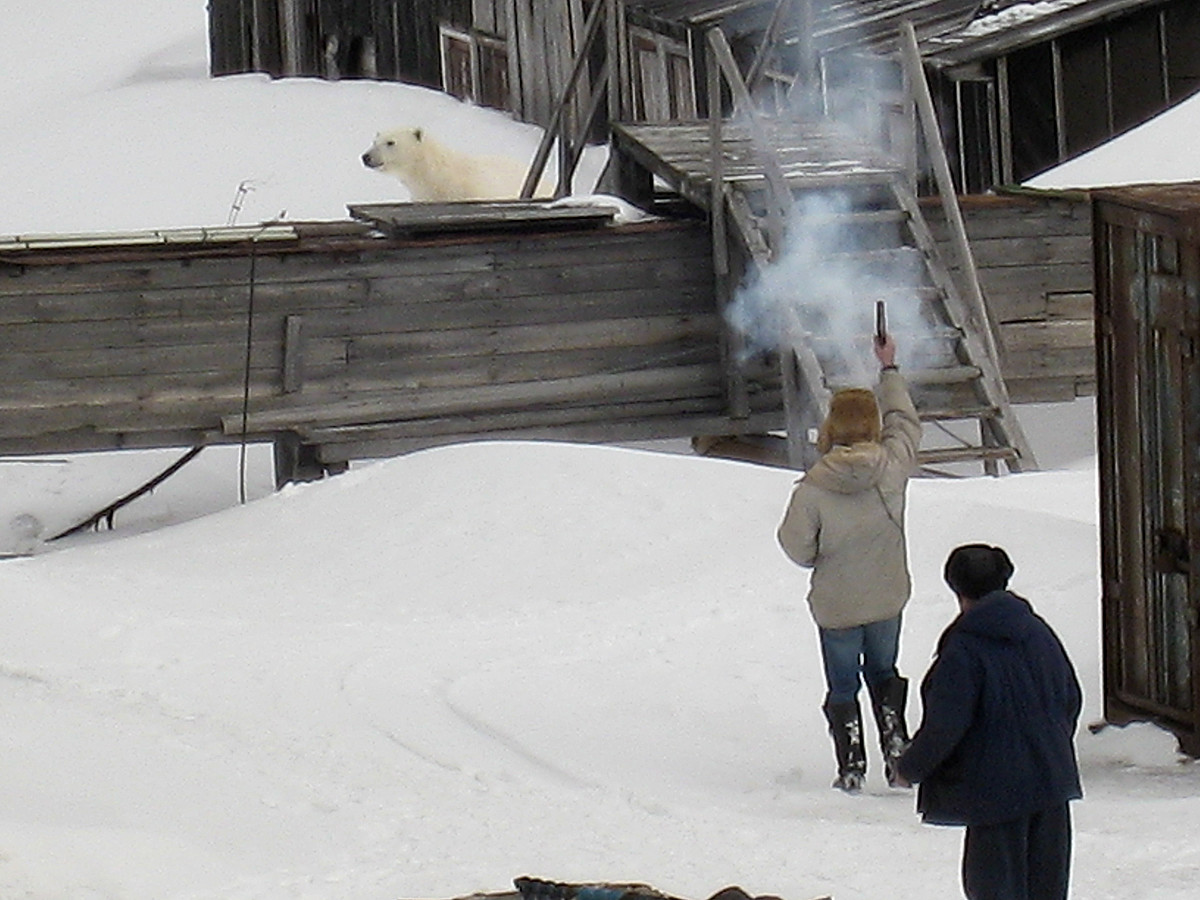 Bear in the Amderma village

Tatiana shot the footage in December 2019. It show how her native village was surrounded by 60 bears — the ice was not strong enough for the animals to head north, so they had gathered on the shore near the village where walrus carcasses had lain since autumn.

For more than five days in a row, Tatiana and other residents dug the walrus carcasses out of the snow and dragged them away from the village to ward off the bears, and also went round the village several times a day and guarded the kindergarten and school in case bears showed up there. It was certainly one of the most hair-raising missions of recent years.

The fall of 2019 was hard too for the village of Amderma in the Nenets Autonomous Okrug, says Uvarov. According to him, the village was once home to 12–14,000 people, but today counts no more than 350. Most of the buildings lie in ruins, and bears come scavenging.

“In the fall of 2019, a large bear went right inside a residential building and up to the second floor. People tried to scare it away by shouting, five or six of them all at once, but nothing worked until the patrol arrived and led it back to the sea,” Uvarov recalls.

In May 2020, a bear with two cubs left her den and spent five days in a garbage dump in the village of Leningradsky in Chukotka in search of food. There was no patrol nearby — the closest team had to drive 100 km on snowmobiles and then take the bear and cubs to the sea where they could hunt seals.

“We accompanied them for more than 3 hours, a distance of 26 km. Only when they reached the shore did the mother lie on the ice and calm down. We were ecstatic. ‘Home at last!’ we shouted,” recalls patrolman Valery Kalyarakhtyn.

Besides global warming, the patrols try to protect bears from poachers, who were first spotted on Vaygach Island in 2014-15, says Uvarov.

"The last criminal case related to poaching was in 2017. Fortunately, we haven’t come across any more poachers since.” He notes, however, that there are still no watchposts in bear habitats, and their safety is ensured only by occasional inspections and surveillance by the Bear Patrol. 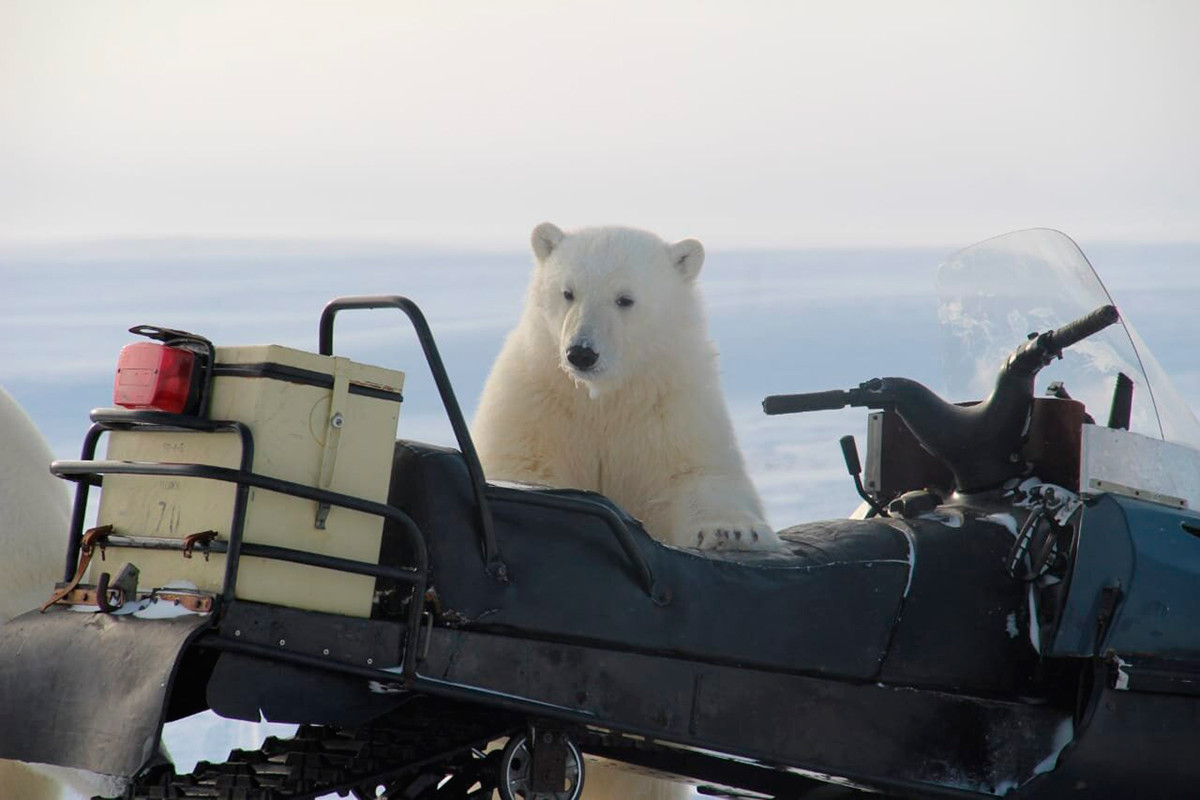 Moreover, some settlements, like Amderma, require more protection, including a system to warn about the appearance of bears, permanent video surveillance, and fencing to keep the animals out.

“We’ve spoken to the administration about improving the protection system, and now we’re looking for funding from those who support it. Our main goal is to avoid loss of life — both people and animals,” says Uvarov.