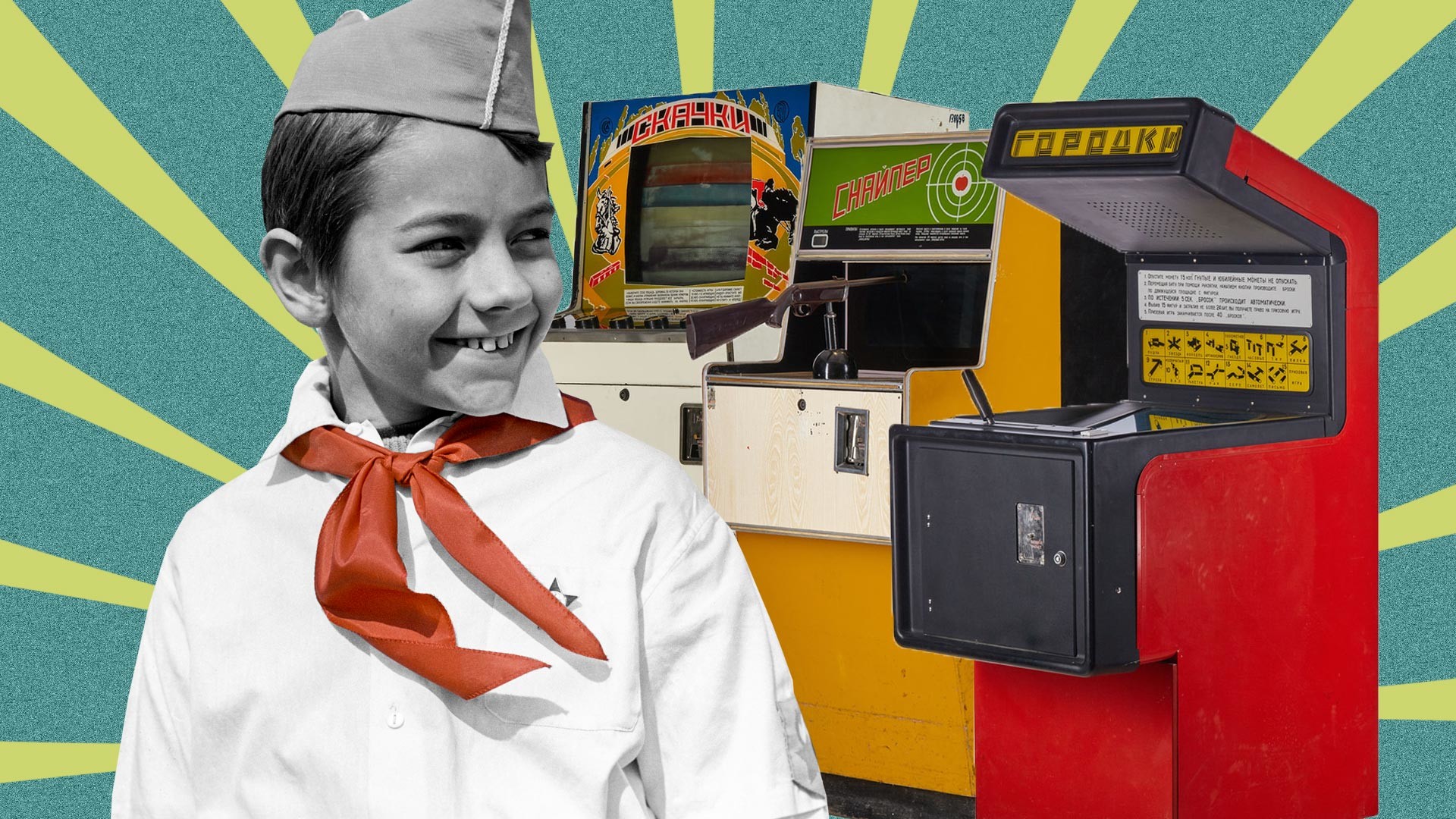 Museum of Soviet slot machines; Boris Kavashkin/Sputnik
In the Soviet Union, you could see a movie and buy a donut for 15 kopecks. Those were the days… However, both kids and adults in the 1970s and 80s were more likely to spend this princely sum on slot machines and arcade games. We list the most popular that gobbled up people’s time and hard-earned cash.

The most popular arcade machine in the Soviet Union was a clone of the US-made Sea Devil. The rules were simple — the player fired 10 torpedoes and tried to hit as many ships as possible.

The uncomplicated gameplay captured the attention of Soviet children and adults alike. From 1974 till the early 90s, several versions of the game were produced (by the Serpukhov engineering plant). One was even used to “train” Soviet submarine crews — the machines were installed right inside the submarines, which delighted the sailors.

You can play Sea Battle here (in Russian) 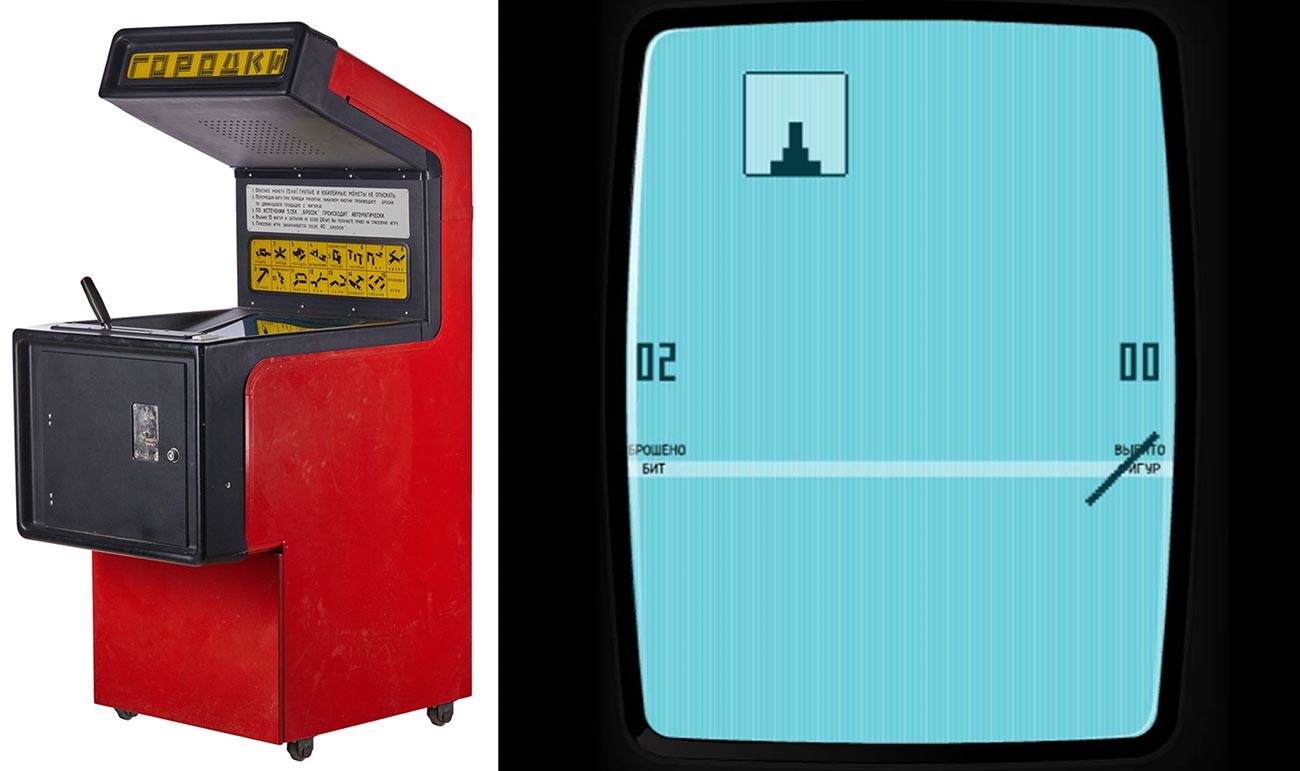 Unlike Sea Battle, Gorodki had no Western equivalent — the machine was based on a popular Russian yard game. The player was tasked with hitting 15 objects with a bat (joystick in the arcade game). There were all sorts of objects, and each was named after what they depicted: Cannon, Star, Well, Sickle, Airplane, etc.

The task was complicated by a time limit of five seconds per shot, otherwise the bat was thrown automatically and randomly. If they succeeded in hitting all the objects in 20 shots, players won a coveted prize (most failed).

You can play Gorodki  here (in Russian)

This table-hockey game is now available in any children's store. Back in the USSR, it consisted of an imposing metal table with massive handles attached to plastic hockey players under a high glass dome. If no one was playing, every 90 seconds the machine blasted out the overture to the opera Carmen. And the theme music at the start of the game was the famous Soviet song “Cowards Don’t Play Hockey” by Eduard Khil. Adrenalin-pumped hockey lovers, remembering a favorite cartoon from childhood that also featured this song, fought tooth and nail to get hold of the precious handles. 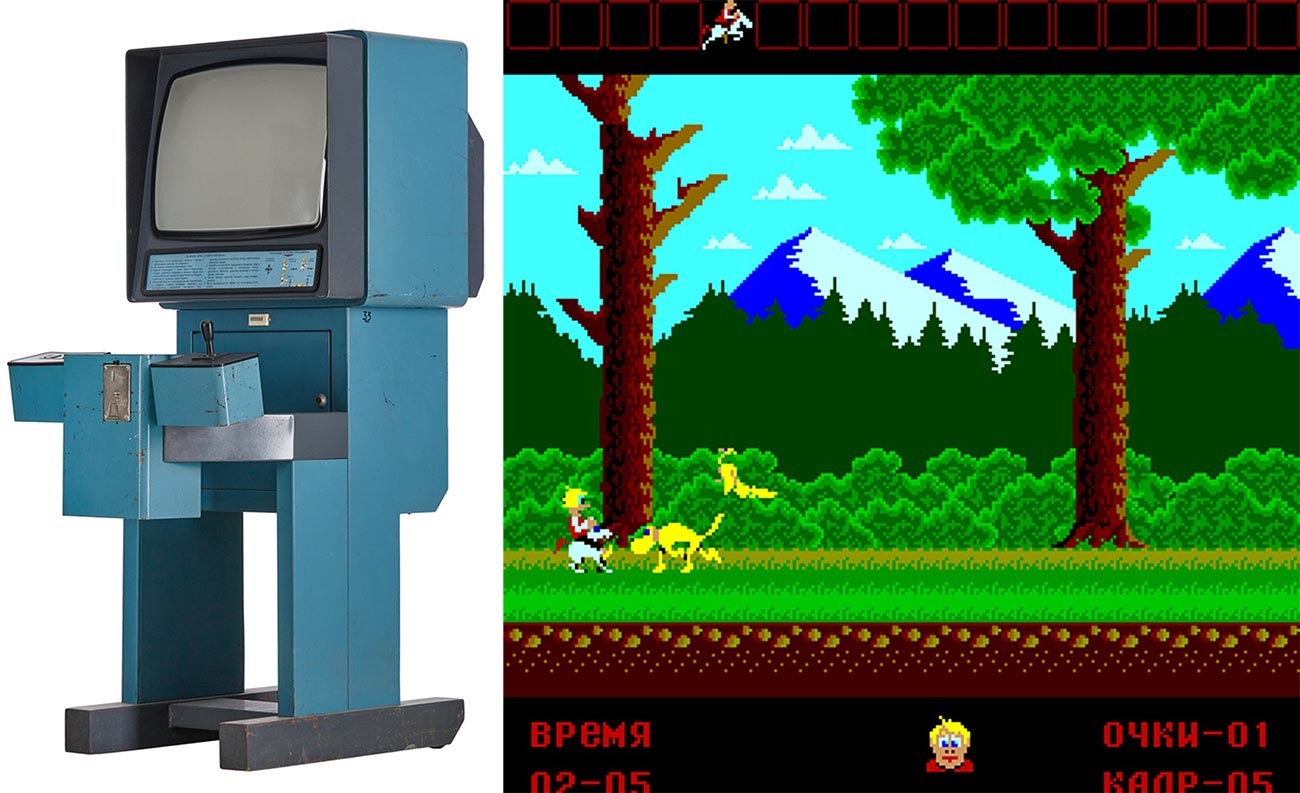 This machine, based on a Russian fairy tale, appeared in Soviet cinemas and arcades in 1986. Many tears were shed and hair torn out over this game.

The seemingly simple plot involved players pressing buttons and moving a joystick to lead Ivan the Fool on the Little Humpbacked Horse over obstacles to the right edge of the screen, where a prize awaited them in the shape of a firebird, a treasure chest, or a princess.

Sounds easy, but the player had only three lives. Stones, flying fire, and dragons were waiting at every step, and the joystick was a nightmare to control. Each mistake cost a life, and after three attempts the game stopped.

On top of that, there was a time limit of five minutes, which didn’t simplify matters.

Some spent months on the game, and especially avid gamers chucked tens, if not hundreds of rubles at it — almost their entire monthly salary.

See the game in action (in Russian) 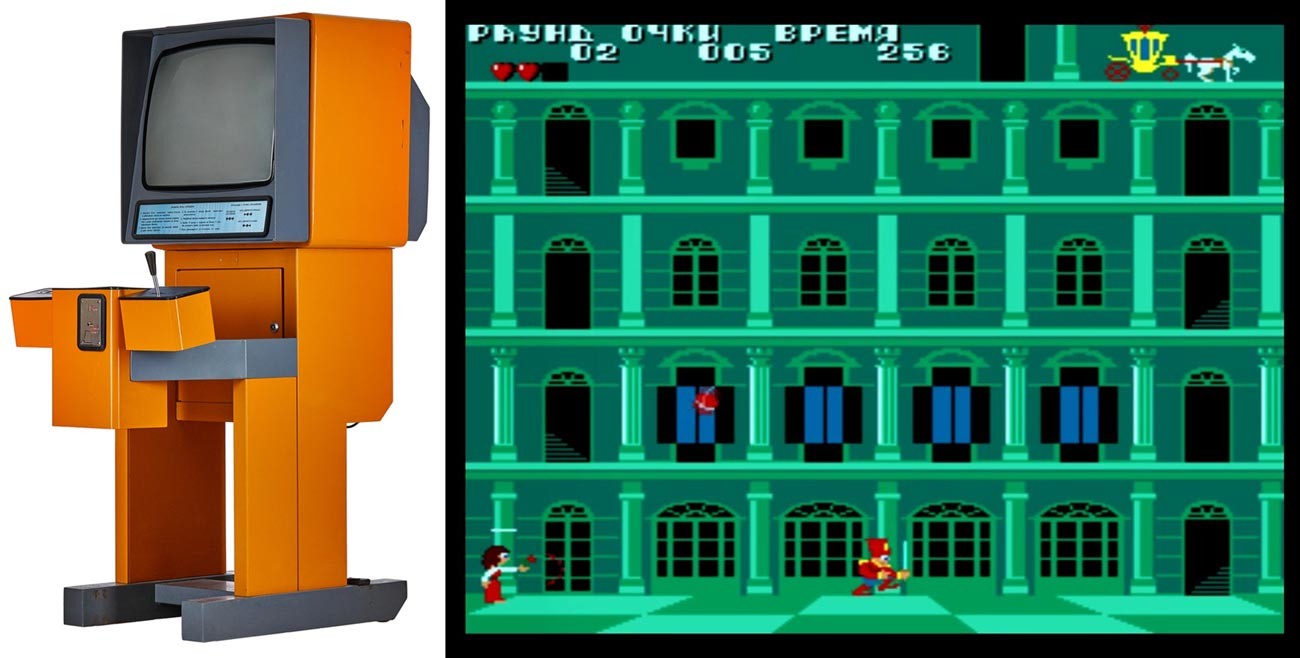 This game, based on the tale by Hans Christian Andersen, was the cause of countless nervous breakdowns.

The game consisted of four parts: first, Gerda collected roses in the flower garden of a kind sorceress, then ran away from the guards in the princess’s palace, then from a band of robbers, and finally from snowmen in the Snow Queen’s castle.

Gerda was given five minutes to overcome all the obstacles and complete the quest, after which the game reset automatically.

You can check out the gameplay (in Russian)

You’re probably familiar with high strikers and strength testers. People take a mallet and bash a gong with all their might, hoping to see the tower light up to the top.

The Soviet Union came up with a more interesting variant: instead of a mallet, in Turnip the player pulls a handle as hard as possible (simulating pulling a turnip out of the ground). The maximum traction force is 200 kg (for physicists: almost 2,000 N), but not even the Hulk could do that (although he probably never tried). Very often people’s hands slipped from the “turnip” and they ended up flat on their you-know-what with a beetroot face.

Watch it here (in Russian)

This standard two-player racer with obstacles was one of the most difficult games of its time. There were no buttons or joysticks; instead players had realistic steering wheels and metal pedals, and an innovative (back then) split-screen view.

The game had day and night modes, and while the former was manageable, the latter was effectively impossible.

You can play Freeway  here (in Russian) 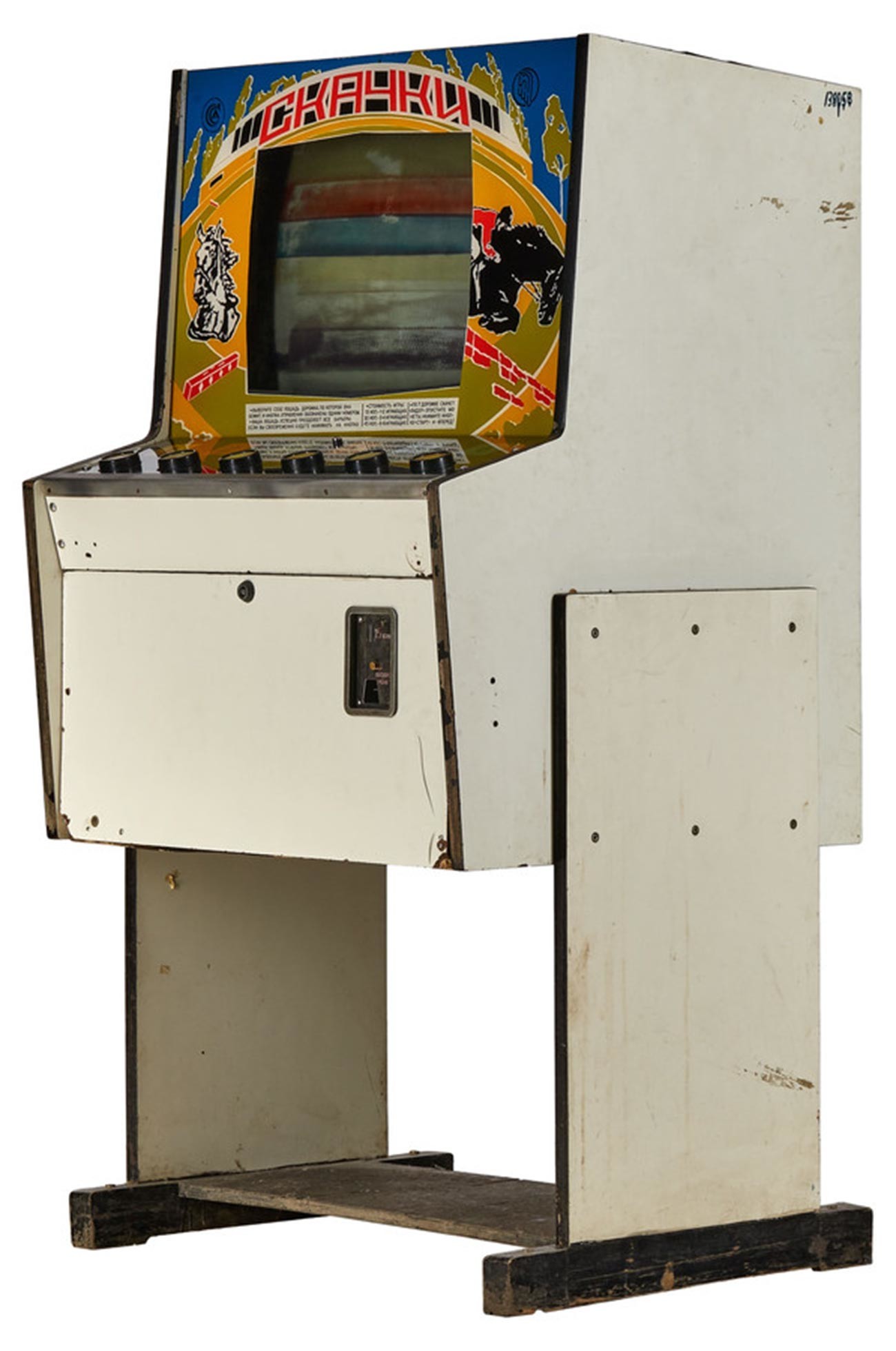 Outside the USSR, the arcade game Safari, in which a hunter rode through the savannah shooting animals, was hugely popular. Inside, there was a more entertaining alternative.

Up to six people at once could play Skachki. Each player was allocated a lane down which his or her horse would gallop. Players had to press a button at the right moment to jump over obstacles.

Every second new obstacles appeared, and successful players had to almost second-guess where they would pop up. It set nerves on edge, inflamed passions, and turned what was meant to be a bit of fun into a relationship-ending competition.

There was no time limit, but a maximum 20 shots per session. What’s more, the mechanism skillfully imitated the recoil of a real rifle, throwing the shooter’s hands back and increasing the likelihood of a miss. Countless Soviet schoolboys fell in love with it because it made them feel like a real soldier, at least for a few minutes.

Check out the game (in Russian with English subtitles)

Another popular game of the 1980s, this was nicknamed the Soviet Mortal Kombat. True, there was no whiff of ninjas or monsters here, only fish. The main character was a cat that fought enemies to get valuable fishing worms.

Nor were there any complex combos or gut-spilling executions — the cat could move left or right, jump, and strike opponents with its paws, nothing more. What it lacked in thrills, it made up for in hilarity — especially the scenes with the crow, which, when defeated, fell so theatrically that even Stanislavsky would have applauded.