What CREEPED OUT Russian kids in the 90s? 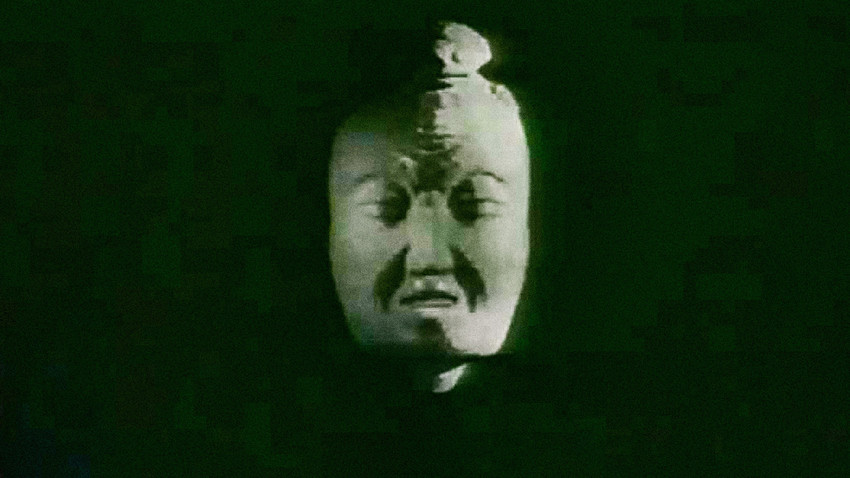 Russia-1
You might think we’re talking about horror movies or scary tales, but you’d be wrong. These Russian cultural symbols weren’t even designed to be scary. Perhaps, it’s their harmless nature that made the terror so visceral!

The production company produced content for TV channels such as Channel 1 and NTV, and, from 1990 to 1997, its logo consisted of a grotesque head that slowly emerged from total blackness into view, filling imaginative little children with mortal fear. Ironically, the opening animated sequence at the beginning of their TV shows wasn’t meant to be scary, and would be followed by all manner of content - analytical talk shows, kids entertainment and everything in between. A number of children and even adults used to think the face belonged to Russia’s then-President, Boris Yeltsin - just a really evil version. Close, but not quite!

The actual idea behind the logo is far less sinister, however. The production company’s founder, together with his wife - who worked at the State Museum of Oriental Art, were actually inspired by the face of an Ancient Chinese philosopher named Guo Jia, depicted with a toad on his head. The face was meant to be a symbol of wisdom and prosperity.

But why was it so frightening? Well, for starters, the designers that brought it to life had - probably for some technical reason - removed the ears. Secondly, nobody could tell that the scary growth on his head was actually a toad. Finally, there was the ambiguous smile. Even in its original form, the face looked somewhat creepy, while the company’s designers somehow managed to turn it into an outright grimace.

Curiously, the design would subsequently be changed several times to reduce the creep factor. Later versions of the logo were a tad less terrifying. And, to everyone’s relief, one could finally make out the toad on the philosopher’s head.

You’d be hard-pressed to find a single person in all of the former USSR who isn’t familiar with everyone’s favorite ‘Tom & Jerry’-styled cartoon characters - Wolf and Hare. Each episode, Wolf chases Hare, with every attempt, predictably, ending in hilarious failure.

There was nothing inherently frightening about the cartoon. Until you got to 1984’s episode 14, that is. There, Wolf finds himself in a lab where he’s stalked by a really annoying robot version of Hare, constantly repeating the words “Hare” and “Wolf”, while pointing its robotic finger back and forth. The robot wasn’t too scary to look at, but, at one point, Wolf finds the whole thing really tiresome, loses his cool (not that he had any in the first place) and hits the robot on its head. This leads to a complete metamorphosis, with the friendly-looking robot turning into a blocky robotic monster with red eyes.

It’s difficult to know what the writers were thinking coming up with something like this, but they really pushed the envelope with this one!

3. ‘The mask of confessions’ from the talk-show ‘Moya Semya’ (“My Family”)

The Mask of Confessions

There was a talk show in the 1990s-2000s, called ‘Moya Semya’ (“My Family”), dealing with relationships within the family. One of its regular features revolved around a guest putting on a mask, allowing them to anonymously reveal a very sensitive story from their life. The people changed, but the mask remained the same.

The design itself wasn’t that scary to an adult - the mask resembled something you might see at a Venice carnival. The children, however, really got the creeps whenever it appeared.

What was so scary about it? Well, there were the hollow eye sockets. And the mask itself resembled a large alien head - so large that you couldn’t even tell if the person underneath was a man or a woman. Finally, there was the creepy voice used to anonymize the person. Put together, these things became fuel for children’s nightmares.

4. The bear from the motion picture ‘Morozko’

‘Morozko’ came out in 1964, but the movie would be shown to children around the country as part of the New Year’s night TV program for decades. The fairy tale tells of a wicked stepmother, which forces her husband to banish his daughter out into the cold, dark woods at night. The story itself has a happy ending, everyone survives.

However, there’s a character in the movie that you might think twice about showing your kids. His name is Ivan. Not exactly a fine young man, his character got him in trouble with an old wizard, who decided to teach him a lesson by turning him into a bear. Well, part bear, part man.

Ivan’s body stayed human, while the head was transformed into that of a bear (Soviet filmmakers weren’t really masters at making masks, because the mask resembles something out of ‘The Texas Chainsaw Massacre’, but with more hair. We’re freaked out by it even today).

In the end, Ivan is, of course, transformed back into human form, and everything is back in its rightful place. Everything except the fragile psyches of the Soviet and Russian children exposed to that hideous ‘bear’, that is.

5. The demon from cartoon ‘Kak kazaki na svadbakh gulyali’ (“How the Cossacks Partied at the Wedding”)

The series of animated short films ‘Kak kazaki…’ deals with three Cossacks, and comes to us from the distant 1960s, courtesy of Ukraine’s ‘Kievnauchfilm’.

The jolly Cossacks engaged in a variety of activities and adventures: played football, travelled and even encountered extraterrestrials. However, there was one episode, produced, incidentally, in 1984 - just as the ‘Nu Pogodee’ one. And it really didn’t sit well with small children.

There, the Cossacks partied at a wedding, where they encountered a whole army of demons, witches and other supernatural evils. Most of them looked quite comical, but they also had a gang leader - a large creature with a head almost the size of its entire body, complete with a huge nose. The ears weren’t much better to look at.

The tale ends happily with the evil destroyed, and the Cossacks continuing to party at their friend’s wedding. All’s well that ends well!