How Russians turned remote photo shoots into a new genre 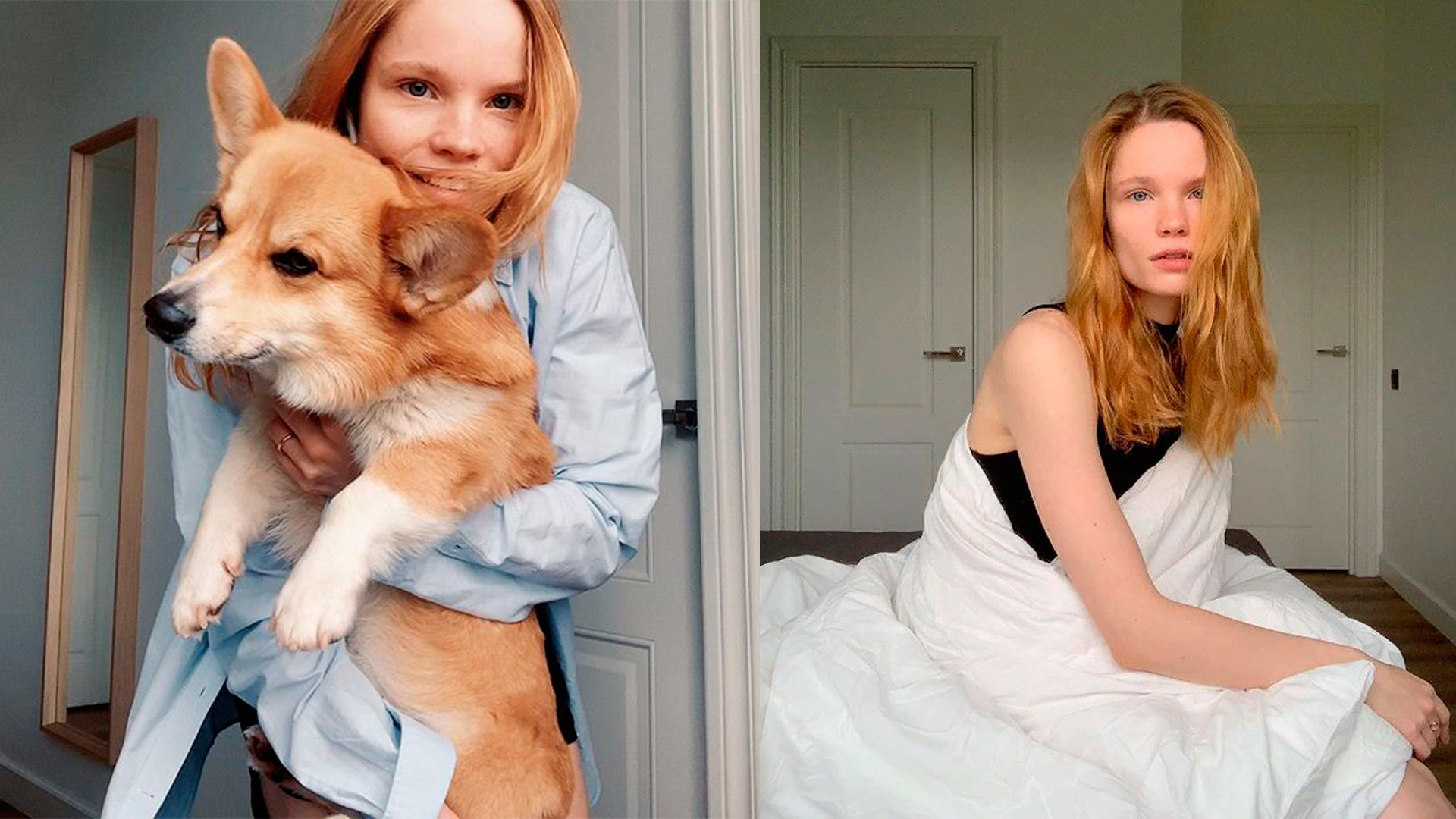 @polina_oganicheva @alenachendler
We thought that social distancing had put a temporary end to photo art. In fact, it’s opened the door to all kinds of new opportunities.

It’s already about 2pm, and I'm still in my unicorn PJs, trying to recover from another night of TV binge-watching with the help of a third cup of coffee. Taking a sip, I peer at my smartphone screen. A tall, slightly disheveled brown-haired guy is talking to me over a video link, spinning around on his chair. Somewhere from the bowels of the room, a female voice rings out. It’s not clear at first if she’s talking to him or me.

“Hey, you should comb your hair!”

“Yeah sure, I forgot. Some model I am…” the guy flusters. Phew, it wasn’t aimed at me. I touch the screen and take a few shots.

It’s all part of a spontaneous photo session via CLOS, a Russian iOS app for professional remote shoots. The app creator, Dmitry Rollins (the chair-spinner himself), is sure that it will remain popular even after the pandemic, and ultimately redefine the future of photography.

“If art can be created on the couch, count me in,” I think to myself, and take a couple more shots.

The idea for CLOS came to Dmitry in March 2020, when the whole of Europe was already in lockdown, and photographers had just started doing shoots via FaceTime and Zoom.

“I’m the founder of a post-production company that retouches photos for magazines and videos. A photographer friend of mine asked us how he could do a remote shoot with no loss of quality and no noise. It dawned on us that the market was crying out for such a solution,” says Dmitry.

The app was two months in development. Besides Rollins himself, programmer Dmitry Ponamarev and designer Dmitry Gavrikov worked on the project.

“Each photo weighs in at 4-5 MB, and is saved on the model’s smartphone. After that, the pictures automatically upload to the cloud where shoot participants can select the best images and monitor the process,” explains Rollins.

“CLOS and similar apps will give rise to a new kind of shooting. They will let people realize their creative ideas not only at home, but outside. It’s not a quarantine app, but an app that appeared during quarantine and solves user problems that existed before,” states Dmitry.

Commercial photographers, he says, travel to different cities and spend a lot of money for the sake of just a few decent images. Now, to do a shoot in New York, for instance, there’s no need to spend money on a flight and hotel — the photographer can find a model in New York, agree a price, and set up the shoot via the app without leaving home, Rollins explains.

That allows photographers to do several shoots in different places all in one day. It will also help those who, due to disability or other reasons, cannot leave their apartment or city.

When the app starts up, it prompts me to create a “room” for the video call. In addition to the model, I have the option to invite two other people: for example, a lighting technician or stylist. The “room” itself imitates a standard no-frills camera app: the interface has buttons for filming, saving, and switching between the front and back cameras, nothing more.

As the "location" Dmitry suggests a vintage pedestal surrounded by portraits. In this setting I could imagine an elegantly dressed dame, but not a rugged-faced lumberjack (no offence, Dmitry). That’s when I learn the first rule of CLOS club — always discuss the location and the model’s appearance in advance. 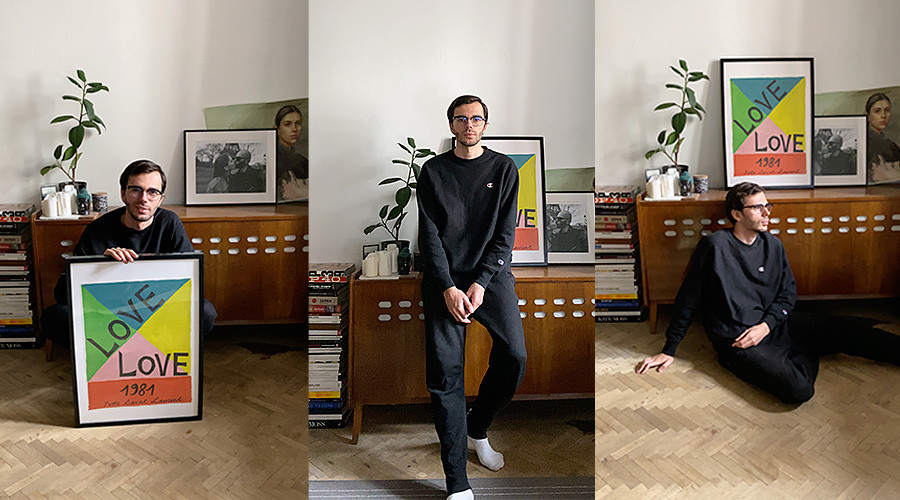 As it turns out, explaining what poses you want is a darn sight harder than showing. The camera sits on the floor a few meters from the model, who stares confusedly in the direction of the muffled voice coming from the other side of the room:

At this point I learn the second rule: find a common language with the model… and quick, before the shoot goes pear-shaped. And speak slowly, since there’s a slight delay over the video link and movements don’t always happen instantaneously. 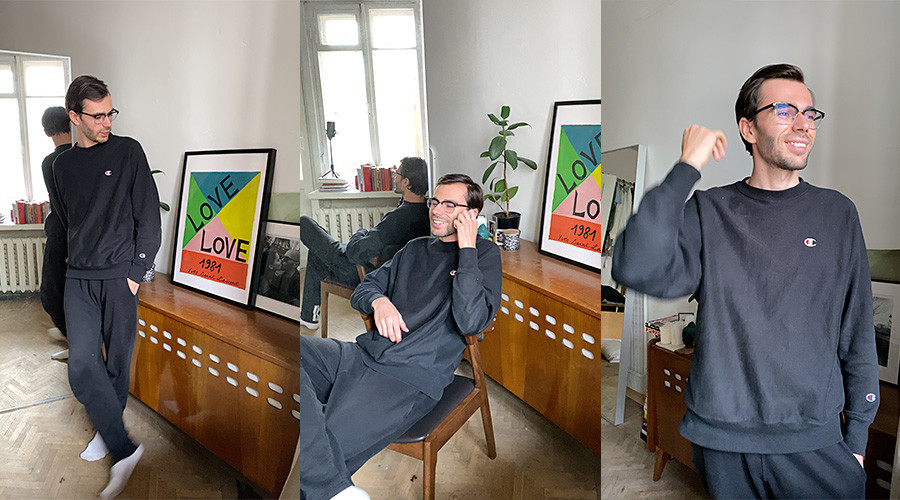 Having finished torturing the wretched pedestal, and even managed an enigmatic twirl in front of the mirror, it hits me that I want him to gaze pensively out the window!

Seeing that he has a great profile, I take 20-30 shots in quick succession.

“By the way, the app also lets you change the exposure,” notes Dmitry.

I glance at the shots, and in every one of them see an overexposed window and only the silhouette of Dmitry.

“Rule number three, dumbass, is get the light right,” I mumble to myself and continue shooting.

The result of the 20-minute shoot is Dmitry’s exhausted girlfriend, who’s been holding the mirror for us, and an equally tired Dmitry, who’s fed up of balancing the phone in all kinds of positions. Not to mention 200 images. True, many of them are blurred due to the quality of the video link (at least that’s my excuse). Then rule number four announces itself: take as many shots as possible, including in burst mode. That way, you’re bound to find some diamonds among the rough. It might also be time to upgrade your home internet.

I may have failed to create a work of genius during our poorly prepared 20-minute blitz session, but I’m consoled by the fact that even professionals need time to get used to the subtleties of CLOS.

“The app will let photographers worldwide compete on equal terms, because the decisive factor won’t be the ability to fly to a stunning location, but the skills and talent of the photo artists themselves. It will be more honest,” sums up Dmitry.