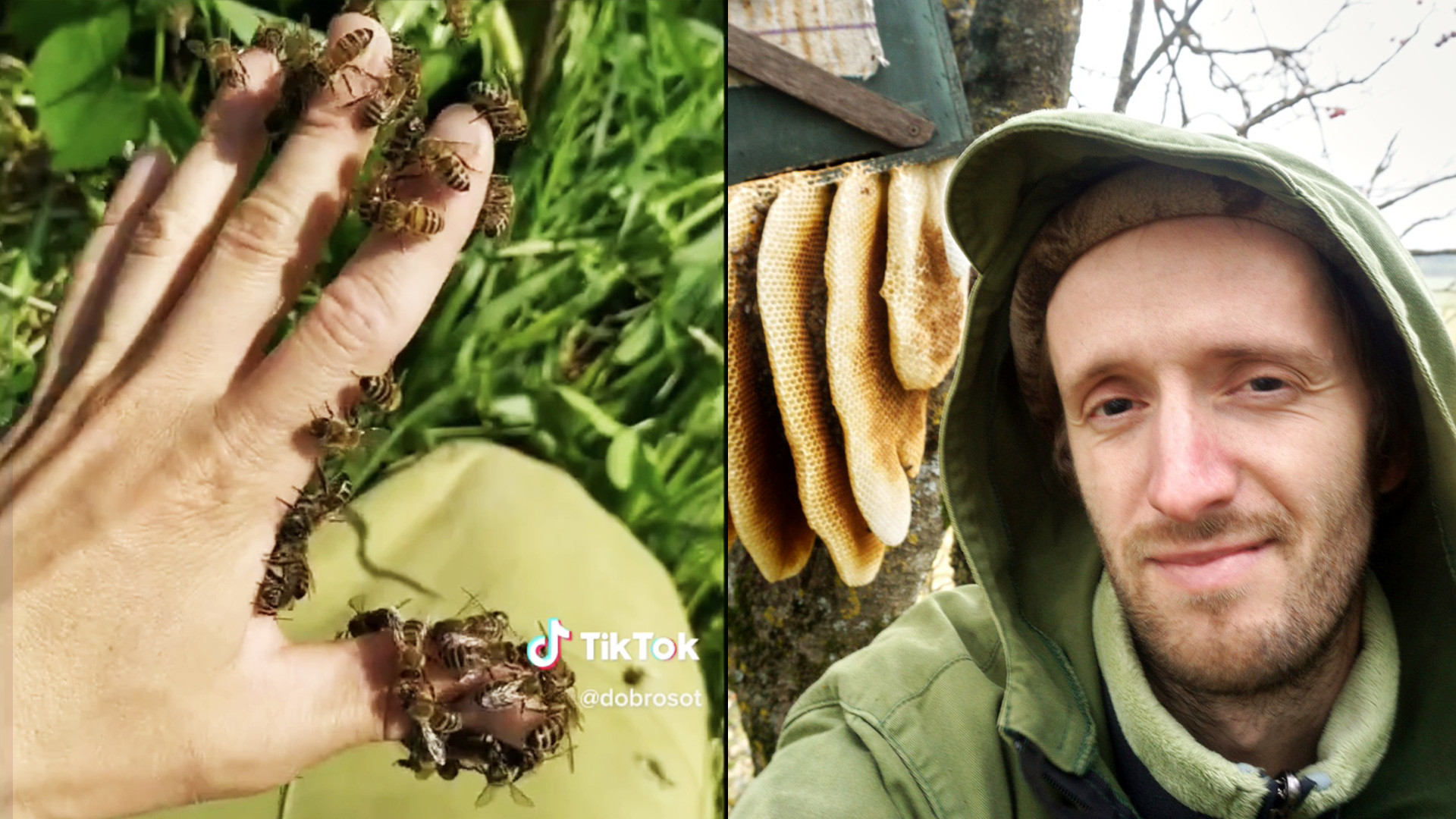 dobrosot
No dances or challenges - just up to the elbows in bees and honey. A lot of honey.

The village of Muratovo lies 83 km from St. Petersburg. It consists of 40 plain wooden houses surrounded in winter by snowdrifts and in autumn and spring by mud and puddles — or what locals call the “road”.

In late spring and summer, one of these houses turns into a nightmare for anyone who has ever been stung by wasps or bees during their childhood. That’s when beekeeper Andrei Dobrosotsky shows up to tend to the 30-40 beehives on his aunt’s plot of land.

Dobrosotsky is probably the most popular Russian beekeeper-bloggers on TikTok (not the most fiercely contested title, admittedly). Some of his videos of these stripy winged insects get up to 7 million views.

This is the brief story of how a beekeeper conquered TikTok’s Russian audience, and how his bee videos help not only sell honey, but also preserve the planet!

Andrei first thought about moving to the countryside 11 years ago, then as a 27-year-old chef working in St. Petersburg.

“Every summer as a child and teenager, I went to my grandmother’s village in Ukraine. There, I learned how to milk goats and cows, and take care of the garden. When I turned 27, I started remembering how good it was without traffic jams and crowds of people,” says the blogger.

He decided to move to his aunt’s place, a village outside Russia’s northern capital, but soon realized that this would require extra income besides his work as a cook. Dobrosotsky didn’t fancy breeding cows or chickens (he opposes the slaughter of animals), and humans do not live by milk and cucumbers alone. The solution, he thought, would be beekeeping and making honey, so he started searching online for info about it.

“Bees produce their own food, and there’s no need to kill any of them. Plus, I was never afraid of bees. The only difficulty was persuading my aunt to keep the hives on her land. For her, a 70-year-old woman, I seemed like a crazy kid who’d decided to infest the place with killer bees,” Dobrosotsky recalls.

The details are hazy in Andrei’s mind, but eventually she agreed, despite remaining scared of the buzzing creatures for several years. What stuck more deeply in his memory was the need to sell all his photo equipment (he used to be a keen amateur photographer) to purchase his first hives.

“As it turned out, bees are a commodity, just like smartphones or Coca-Cola. There are nurseries where people breed and sell them, and beekeepers sell them on classified sites,” Andrei explains.

“That’s considered a relatively small ‘starter kit’, given that 2,000 bees are born into the family every day,” says the beekeeper.

Beekeeping, says Andrei, is a fairly simple job. The main thing is to replace the boxes with honeycombs at the right time, so that the bees have somewhere to work and breed. It’s also important to monitor the production of honey and collect it. In the end, Andrei decided against permanently moving to the village, because of his main work (he still works as a chef). Instead, every 7–10 days, he visits his aunt, takes care of the bees for a couple of days, then returns to the city.

For several years, Andrei kept a bee-themed Instagram account, but his minute-long videos didn’t get many views. Then, in January 2020, he began shooting even shorter videos for TikTok — a social network that had no Russian beekeepers on it at all.

“I started talking about bees in clear and simple language: how they live, what they eat, how they breed. People were amazed to see me climbing into the hive and touching them. They asked if getting stung is painful, but for me it’s commonplace. Only yesterday it happened 10–15 times,” says Andrei about the reasons for his TikTok popularity.

The first video to make it into the recommendations list and garner more than 5 million views was about… saving bees from lice.

“I put a [sick] bumblebee in a jar with essential oils. After a couple of minutes, she was healthy and ready to be let out,” says Andrei.

After that, Andrei recalls, his viewers began to understand that bees should not be feared, and that they sometimes need a helping - human - hand.

To bee or not to bee

The reason why Andrei’s TikTok videos are so popular is not completely clear. But it seems to be partly the interesting information about a relatively unknown topic, and partly his loving treatment of these stripy insects as members of his own family, not as evil stinging things.

“There we go, my little beauty, the world’s been waiting for you. You’re such a cutie,” is how Andrei comments, in a soothing voice, the birth of a single bee in one of his videos.

It’s TikTok videos such as these that also help Andrei sell honey — approximately 20% of his sales come from users of the social network. However, for other Russian beekeepers, making honey money is not so simple.

“We have almost no local producers, which allows me to sell honey at 650 rubles (approx. $9.50) per kilogram. There’s plenty of honey in the south, but the local farmers [here] are simple guys who don’t know how to sell properly. More often, they sell to provincial resellers for a measly 50-100 rubles per kilogram, and don’t even break even,” says Andrei.

Moreover, in Russia, many plants that bees are attracted to, such as rapeseed, are treated by local farmers with the most harmful pesticides, that kill bees and all other living things around. In the words of Andrei, the practice is not regulated by law, and whole apiaries (a location where beehives of honey bees are kept) routinely die as a result.

“Yet bees are one of the most important insects on the planet. They leave pollen on flowers from which apples, cherries, strawberries, sunflowers and other fruits grow. If you like apples, you have bees to thank,” he says.

Going forward, Andrew plans to talk more about the benefits of bees.

“My aim is to get people to treat bees as a part of nature, like trees that mustn’t be cut down, and as creatures that need protecting. Then I’ll know my blog isn't for nothing,” sums up the bee-loving blogger.