7 facts about summer in Siberia 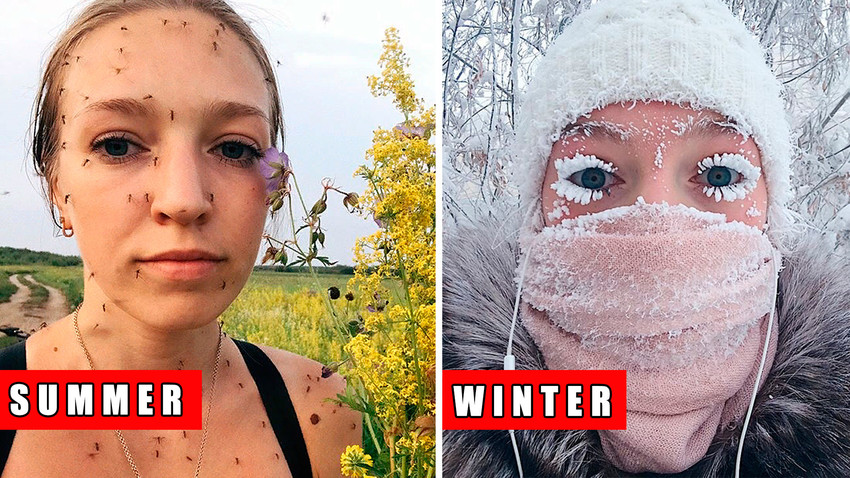 Anastasia Gruzdeva
We have ice beaches, snow even when it is 30C outside and insatiable mosquitos.

Siberia is a vast territory that has just about every kind of landscape: taiga, tundra, mountains and lakes. And very brief but eventful summers, when wild animals leave their natural habitat and come meet humans in theirs. So, what do you need to know about summer in Siberia? 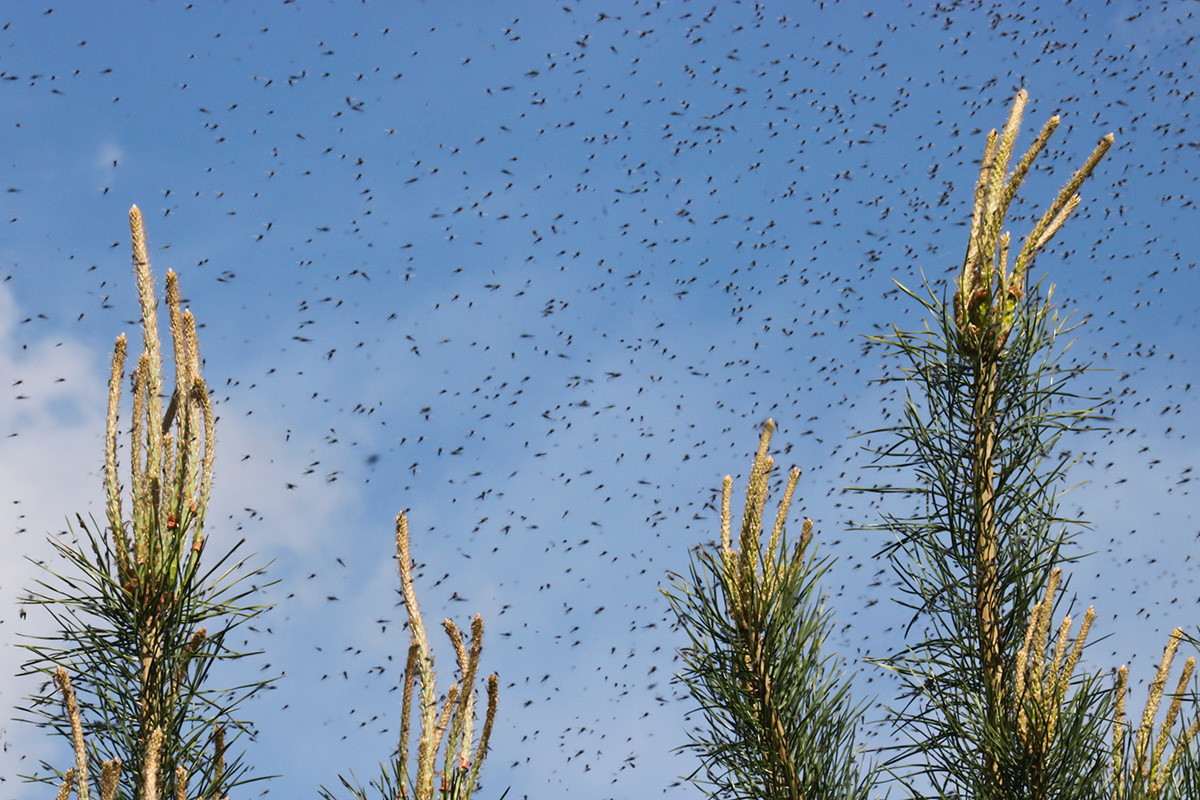 See that nice little cloud? Yeah, better not go too close because that innocent-looking cloud is actually a swarm of enormous bloodthirsty mosquitoes. As a general rule, the most brazen mosquitoes live in the country, and neither the most advanced repellents nor mosquito-repellent clothes will save you from them. They just bite right through clothes, and so after a while people just give up and start to think of them as just another local feature.

“At first, each bite itches and swells into an almost 4-5 cm spot, but after a couple of days you get used to it and cope with it better,” one local resident says.

This video was shot in Yakutia, where you can see the walls crawling with mosquitos, waiting for their victims to come home.

2. And it’s not just mosquitoes. There are also midges and horseflies

In Russian, swarms of these small insects are called gnoos (“gnats” in English), and this is where the adjective gnoosny (meaning “vile”) comes from. Which is not at all surprising since these insects do indeed have vile characters, especially when they attack people in the taiga. Their bites are even worse than those of mosquitos because what we call gnats are actually made up of several different bloodsucking species, attacking you all at once.

“When they bite, it feels like each time they aim at a nerve ending, and it is very painful. You can't get used to it, or getting used to it takes longer than a summer lasts in those northern regions," says one person with first-hand experience of dealing with these creatures.

3. You can sunbathe on top of a glacier 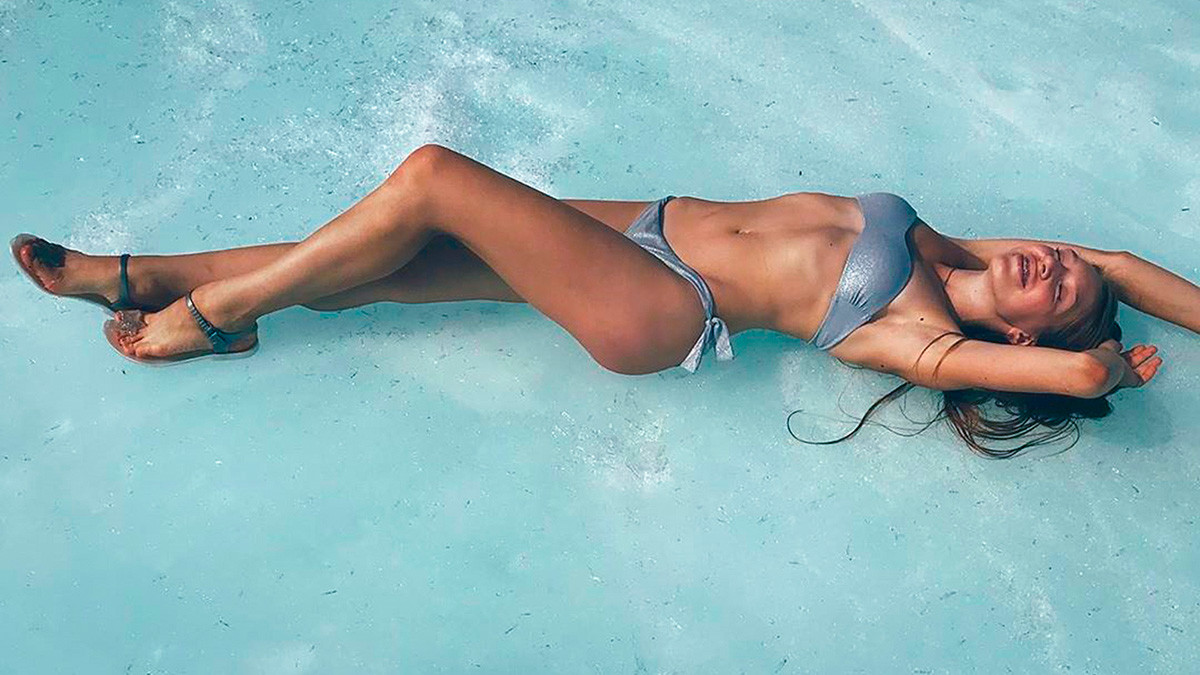 At the Buluus ice beach.

Winters in Siberia are extremely cold and frosty, and the region has permafrost areas as well as some of the coldest places on earth, like Oymyakon and Verkhoyansk. Summers meanwhile can get really hot, like, for example, in Sochi! This is particularly true for southern Siberia (Krasnoyarsk, Abakan, Kemerovo), where the hot weather can last for weeks. Meanwhile, in the central and northern parts of Siberia, the weather can change very quickly. Sometimes hot days arrive so suddenly that not all the snow has even melted yet.

In Yakutia, there are glaciers that do not melt even in hot weather—Buluus is the most famous of these—where you can relax and sunbathe. During the summer, these places turn into recreation areas for tourists. They may be far removed from your typical idea of a sandy beach with people lounging in the sun, but on the other hand you do get to play with snowballs in the heat.

4. But you should still always have a jacket on hand 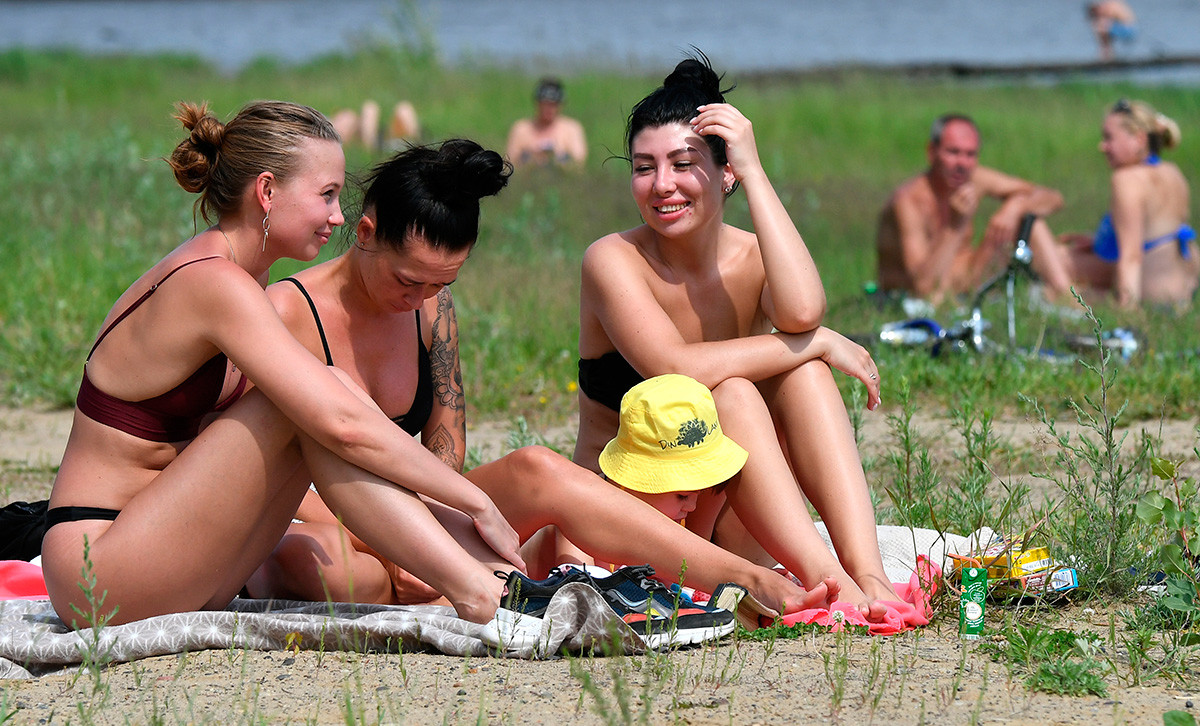 The beach in Krasnoyarsk.

Southern Siberia covers a vast territory, and summer can last a full three months and is often very hot. This makes it possible to grow grain and many other crops there. But in northern Siberia, the summer is very short, lasting from a month to literally just a couple days, and the weather changes rapidly. During the day, it can be 30C above zero and everyone goes to the beach, but then in the evening just like that it can plunge to 10C. This is why locals seize every opportunity to enjoy the fleeting moments of summer and always carry warm clothes with them.

One Muscovite gave the following account of a trip to Yamal: “I arrived from Moscow on June 1, in a jacket and shoes. As I was standing on the airstairs, taking in the view and breathing in the Siberian air, suddenly a lump of snow blew into my face. My fingers froze immediately and my face got numb with the cold. Three hours later, the snow on the streets had already melted, birds were singing and while I was driving my hands and arms even caught some sun. Well, I thought, time to stop to stretch my legs a bit. I took off my jacket, got out of the car, and am standing there, enjoying life, when suddenly I hear "ZZZZ" and sense I am being bitten! I cannot say where exactly they bit me: It felt like everywhere. Three seconds later, they had drunk 10 liters of my blood and devoured 5 kg of my flesh!”

5. No time for sleeping 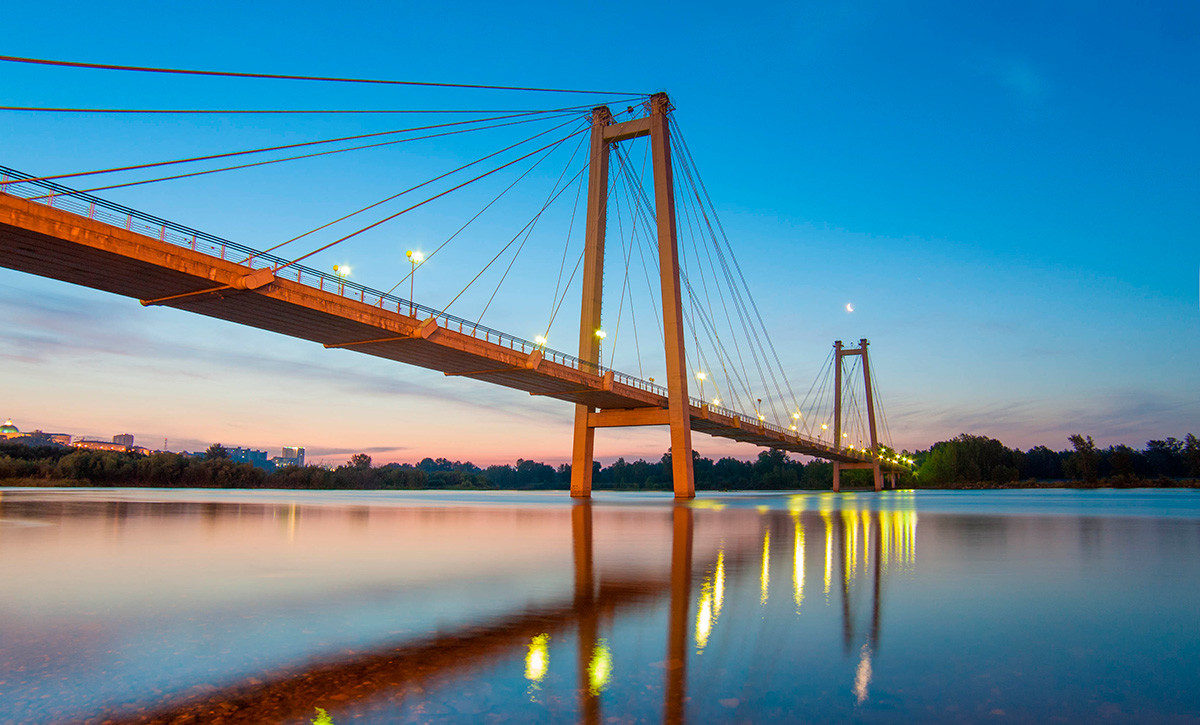 The bridge in Krasnoyarsk at night.

Everyone knows days get longer and nights get shorter during the summer. The question is how much shorter. The farther to the north a settlement is located, the longer days are in the summer. At latitudes of 60 degrees, there are even White Nights—when the sun drops below the horizon for just a couple of hours, and there is dusk but it never gets really dark during the night. Beyond the Arctic Circle, you even get round-the-clock polar days during the summer.

6. You can take a ferry to visit your friends! 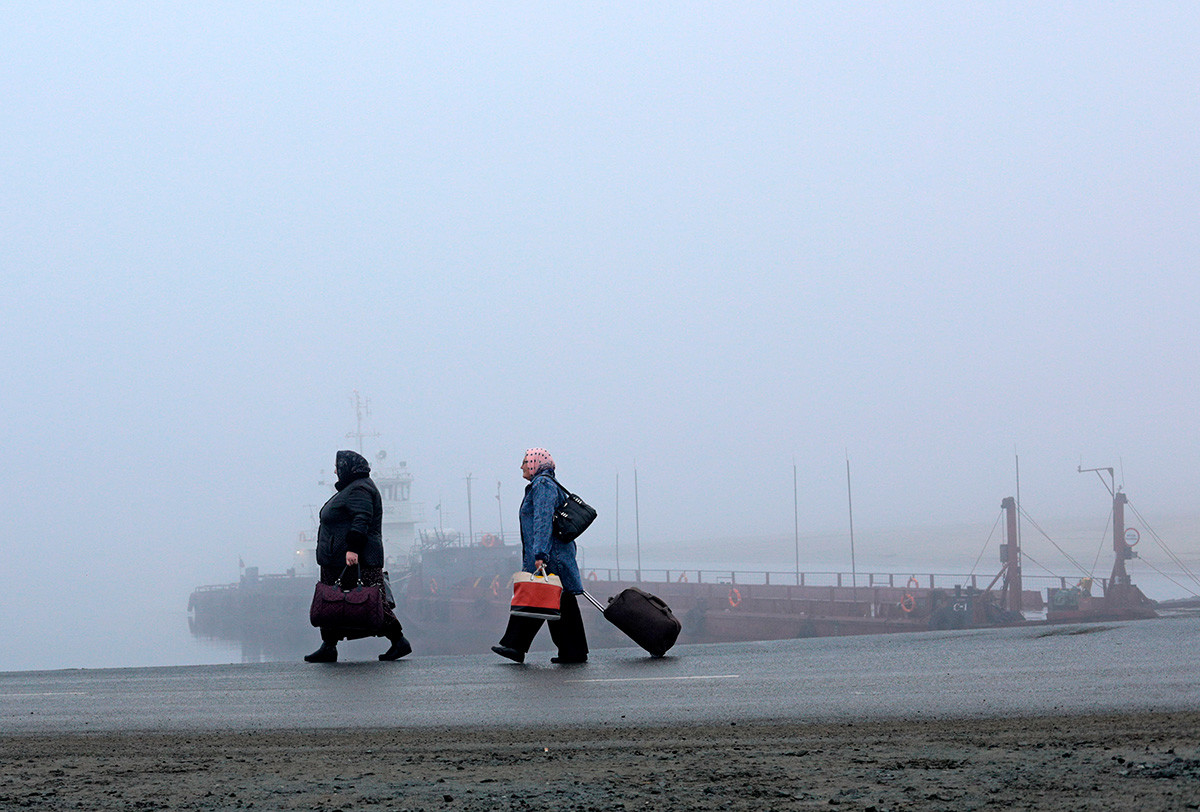 One of Siberia's problems is that it has a lot of rivers and few bridges. The issue is that the stream beds of Siberian rivers make it very difficult to build strong road bridges across them, and so to reach a neighboring town just across the river it is often necessary to take a detour…that in some cases could be several hundred km long. Some cities, like Salekhard or Yakutsk for example, have an airport on one side of the river and a railway station on the other. In the winter, locals cross these rivers on ice and then by ferry in the summer. 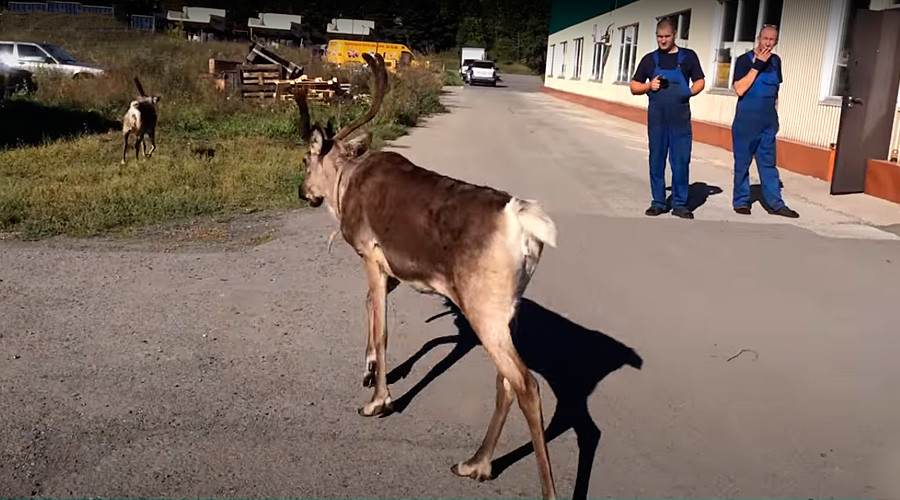 Many Siberian cities are surrounded by taiga or tundra, and so wild animals often wander into town for a visit. Have you ever had reindeer trampling on your tomatoes or arctic foxes stealing fish you just caught? And what exactly are you supposed to do or say when they do?