Made in the USSR: 6 video games Soviets went crazy over 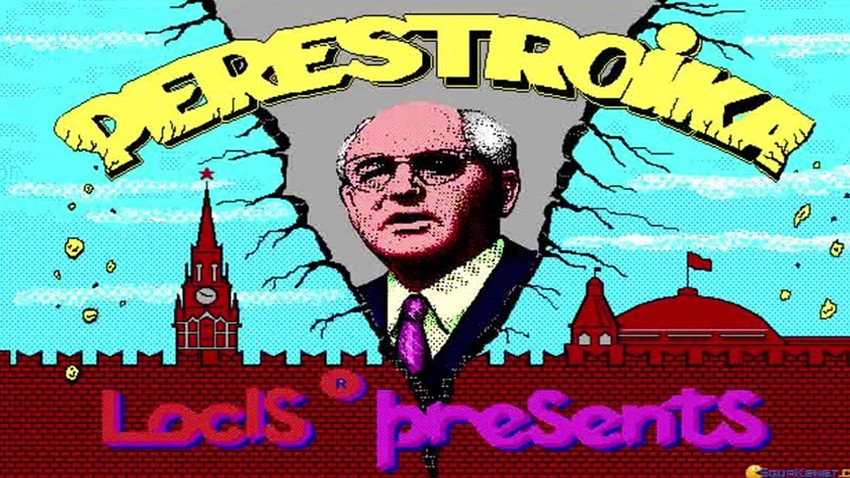 Nikita Skripkin/ Locis , 1990
A few of you probably won’t believe it, but the USSR also had video games. They existed either in arcade form, or had to be played on do-it-yourself game consoles. Puzzles, shooters, economic strategy games - and even political satire! 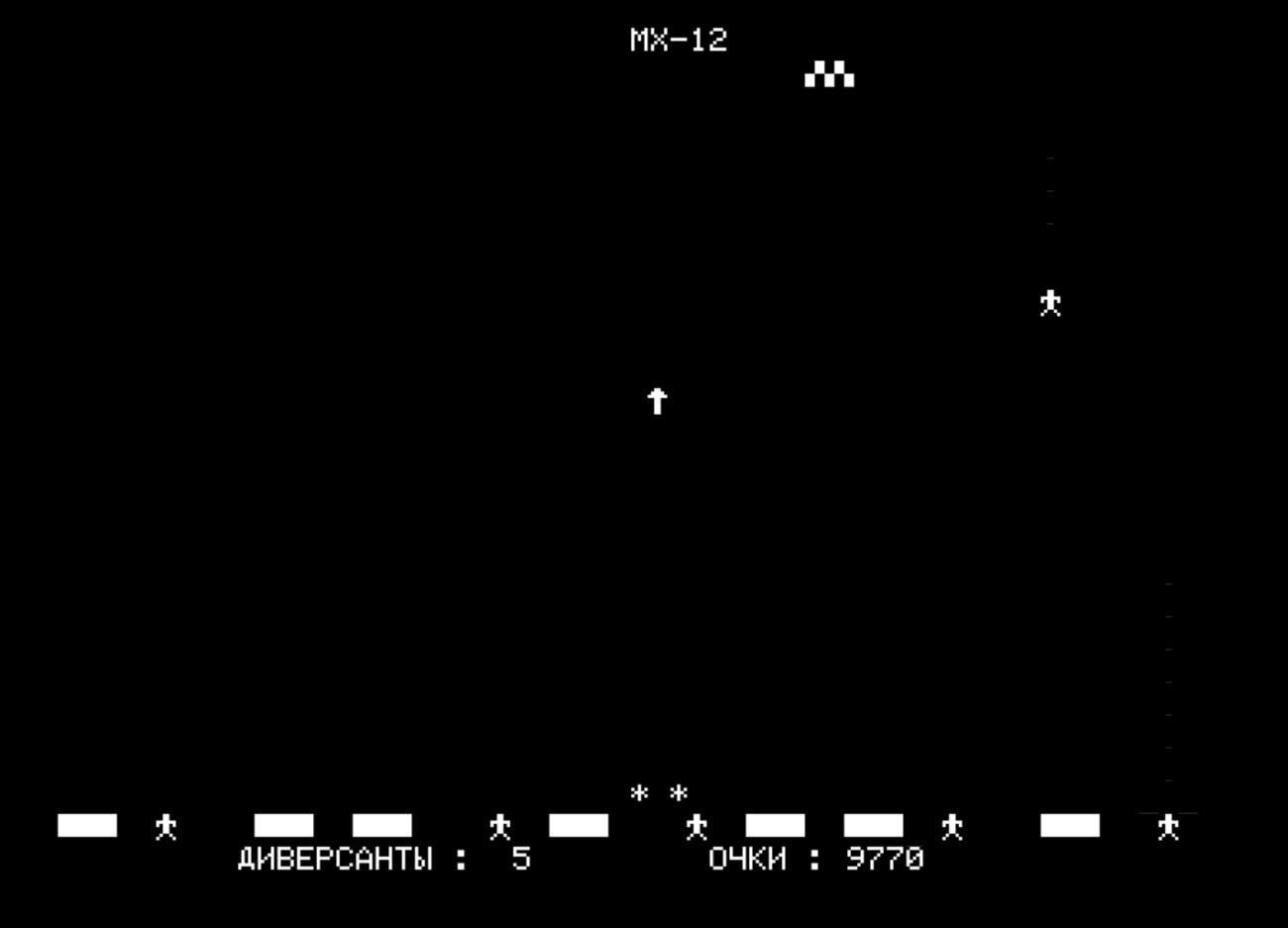 This game was created in 1989 in Kharkov, Ukrainian SSR. Your objective was to defend your city from a Martian invasion.

The gameplay centers on shooting down alien spacecraft flying overhead and deploying ground forces. Your focus needed to increase pretty quickly, as things began to speed up. If more than 10 troopers successfully touched down, the aliens won.

The game was developed for the ‘Radio86 PK’ - a build-it-yourself game console. Unlike other games made for it, Diversant had its own specially made sound effects. Other games only had primitive “bleeps”, “bloops” and “pews” - or simply didn’t have any sound FX at all.

The emulator can be found here 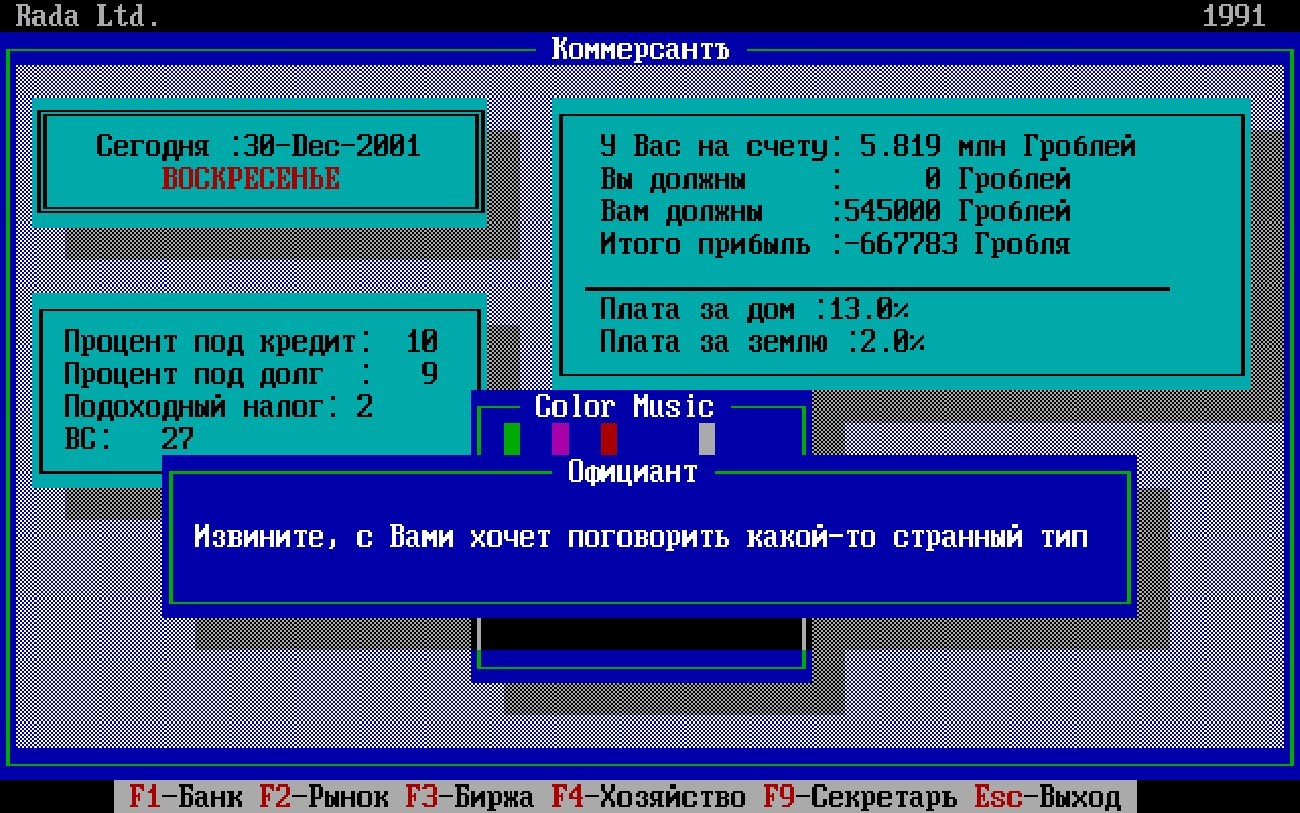 Another Ukrainian-made game - this time from Kiev - came to us in 1991, when things were about to go south for the USSR. The creator was actually a poet and artist - Vladimir Kharchenko.

In this financial strategy game, you were a businessman trying to stay afloat. You began with a house and a car and some money, as well as a little oil and a small plot of land. For a Soviet citizen, not yet familiar with how the market economy worked, the game was a sort of guide to capitalism. You often encountered events demanding a swift reaction from the player - from bankruptcy to mob kidnappings. Even natural catastrophes happened occasionally, which could really derail your flourishing business.

You could also trade stock, place horse-racing wagers, take part in casino gambling and even make lucrative deals after chance encounters in fancy restaurants. It was all about reaching the top in this game.

The game can be downloaded here, but you might need an emulator. Here’s another way to play it. 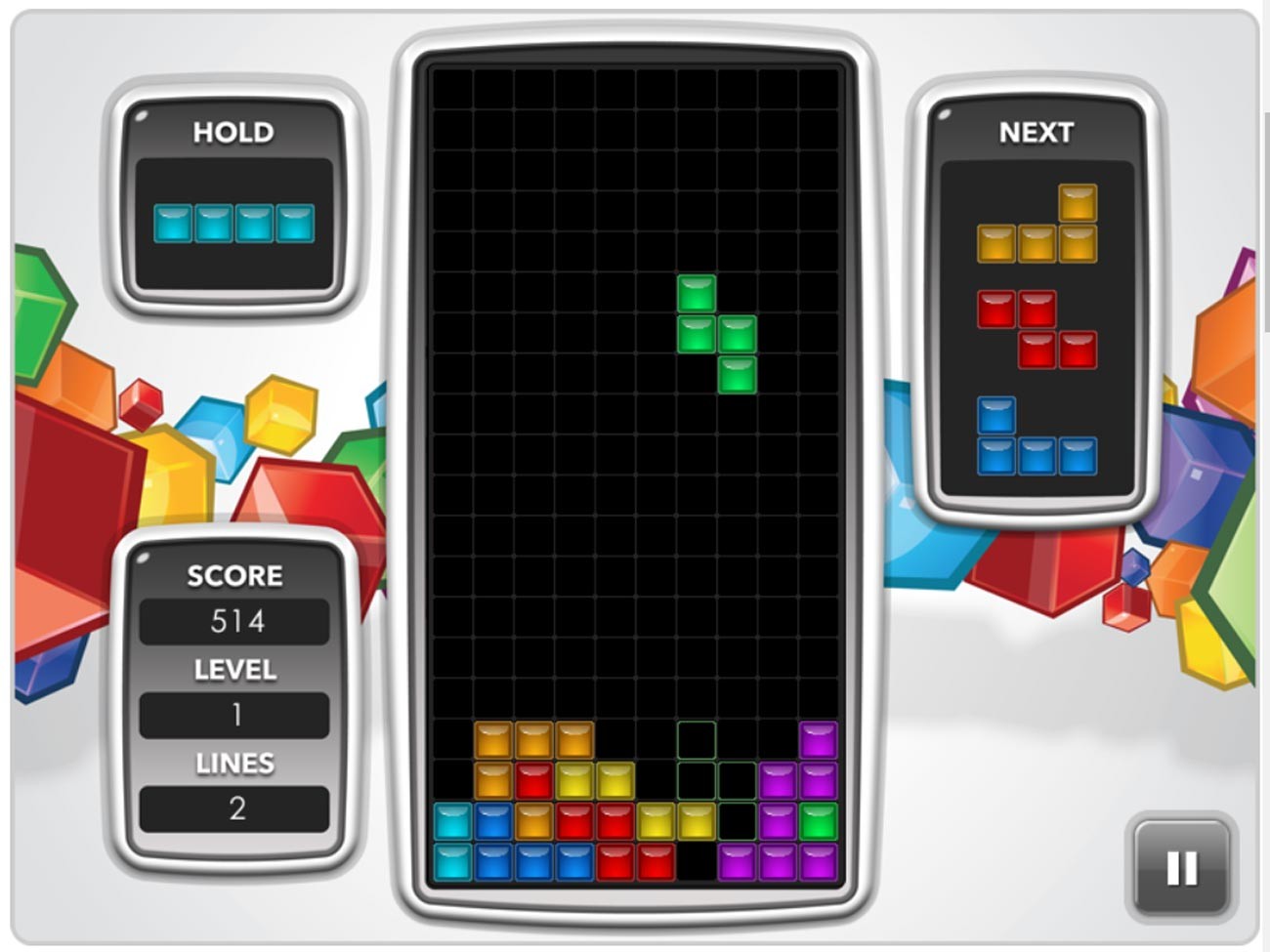 You’d be hard-pressed to find a person that hasn’t played tetris! A version of the legendary puzzle game exists on every console and gaming computer in the known galaxy in multiple iterations. It was created by Aleksey Pajitnov in 1984 in Moscow, and has become one of - if not the most - recognizable games in the world.

The designers were inspired by ‘Pentomino’ - a board game with different-shaped figures made of squares. In Tetris, the figures come down from above, with the player having to arrange them in a way that completes a horizontal line, eliminating it. They come in different shapes and sizes, which can be turned around, but never changed. It’s all about reaction time in this game, which gets faster and faster the more successful you are.

Above all else, Tetris is an example of phenomenal commercial success. It brought its creators worldwide acclaim, and continues to be popular to this day. In the 1990s, nearly every child in Russia had a grey plastic handheld electronic game called ‘Brick Game’, which everyone simply referred to as ‘Tetris’.

This video shows the evolution of the game since its inception in 1984.

And this one shows the first version. 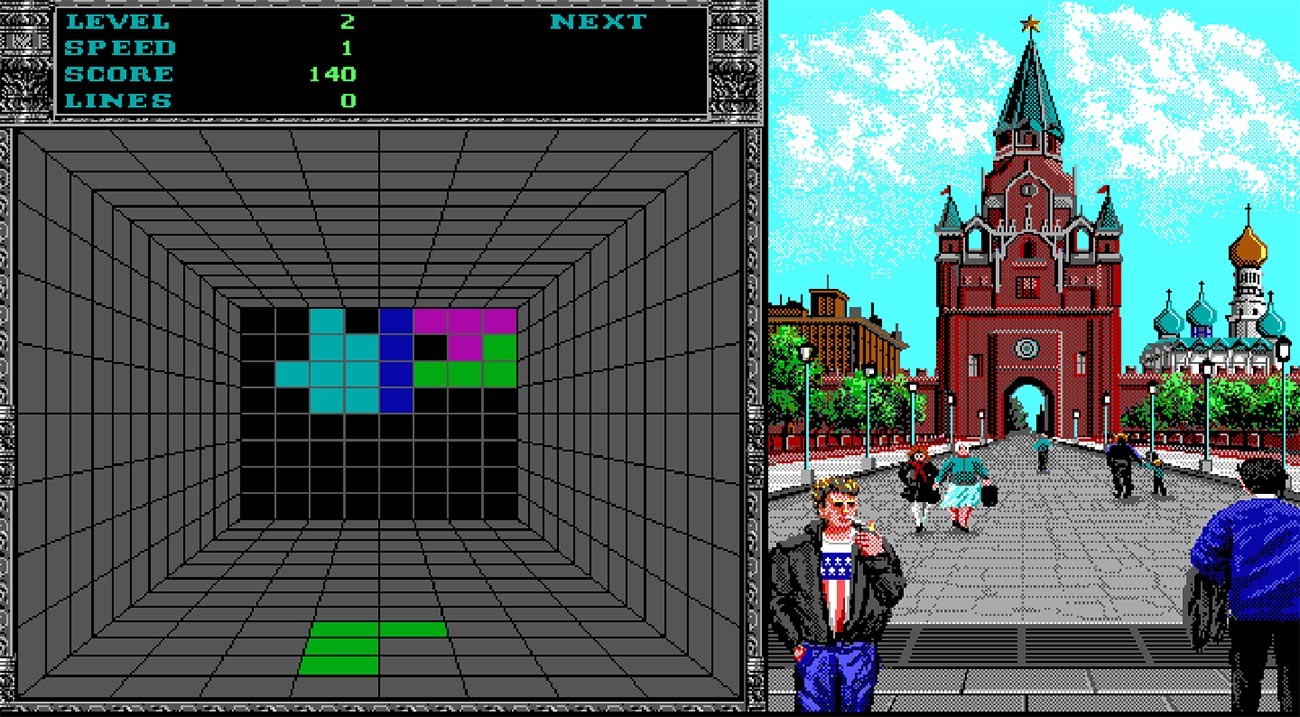 This puzzle was made in 1988 by Pajitnov - the creator of Tetris. It was commissioned by the Moscow Center for Scientific and Technical Creativity of the Youth, which, at the time, was creating educational computer content.

Macintosh, Amiga and ZX Spectrum were among the systems the game ran on. Like its predecessor, Welltris had block figures that you had to arrange. Except they fell into a three-dimensional well. A player had to clear the rows both horizontally and vertically.

You could also tweak the size of the blocks and the speed at which they turned. The higher the speed, the more points you got.

The game graphics were something to behold. They were a mixture of two and three-dimensional images. The initial plan was to have the game in 3D, but the idea was dropped, with the rationale being that the game would have been too slow, affecting its dynamics. The results didn’t disappoint, however.

Here’s a video of the gameplay:

And a website where you can play the game. 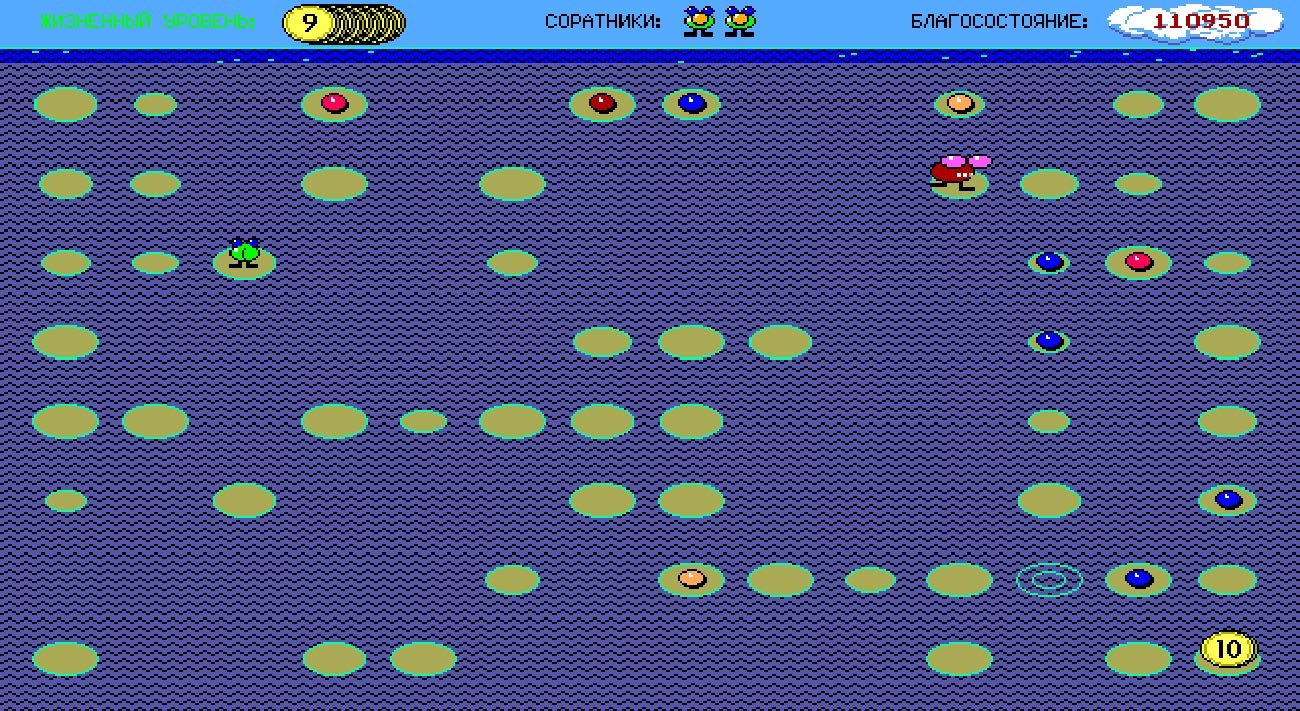 If you guessed that the game came out in 1989, you are correct. It was created in Moscow, and was a sort of political satire, demanding lightning fast reflexes. The story centered on the comical rivalry between new democrats and old Soviet bureaucrats.

The then-President Mikhail Gorbachev graced the title screen with the Kremlin as the backdrop. The interface looked like a swamp with a bunch of jumping toads. A small green figure that looked like an ordinary frog symbolized a ‘democrat’, having to jump over bumps, which symbolized laws and decrees. The bureaucrat was always in its way, and was symbolized by a larger, red figure.

You can play the game here.

If it’s not exactly your cup of tea, just enjoy the video... 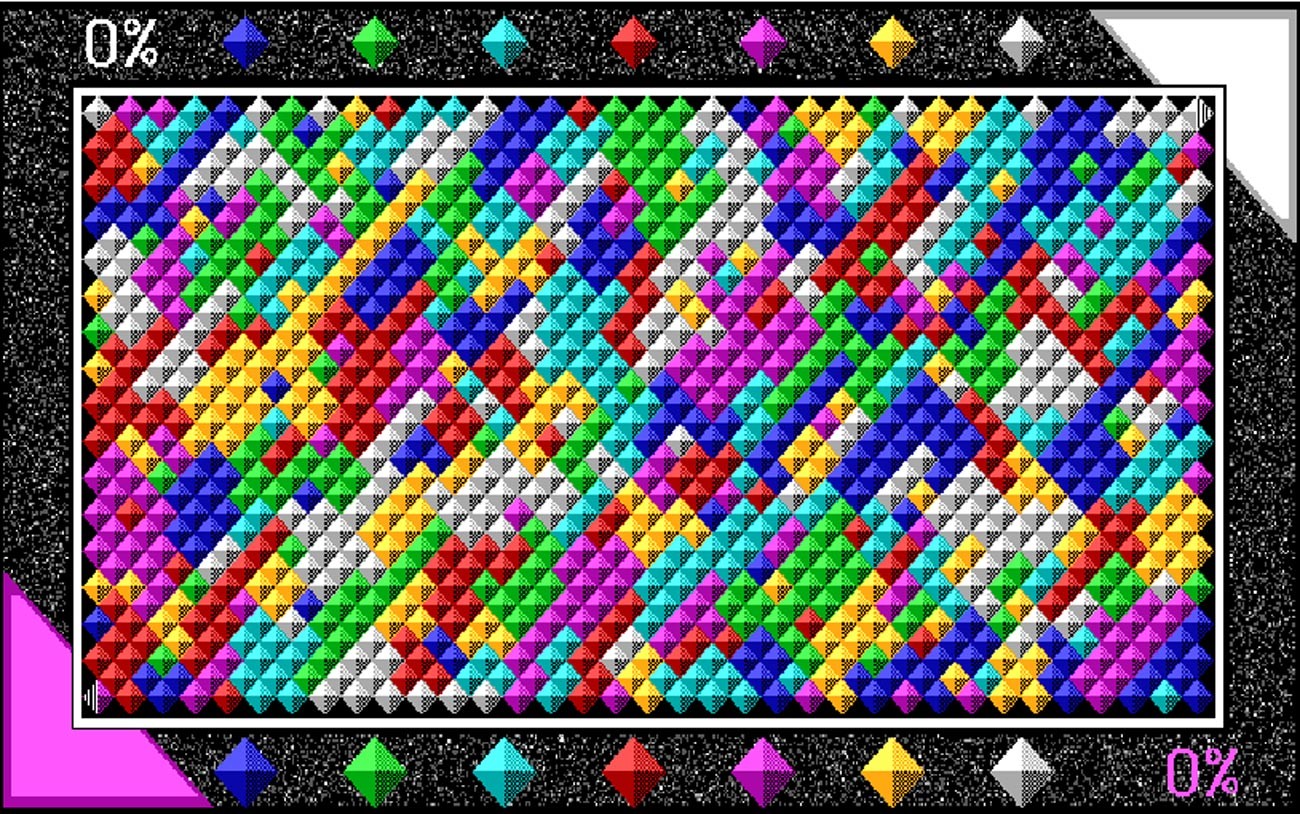 This game simply revolved around filling squares with your own color faster than your opponent. There was a two-player mode, as well as the ability to play against the computer. The game also had a quirky feature - the computer could play itself, with you watching (if that’s your thing!)

The game was created in 1990 by Moscow-based company ‘Gamos’.

Here’s where to play it.

And here’s a video of the gameplay: