Children in Russia have gone back to school despite the pandemic. Officials say it’s safe 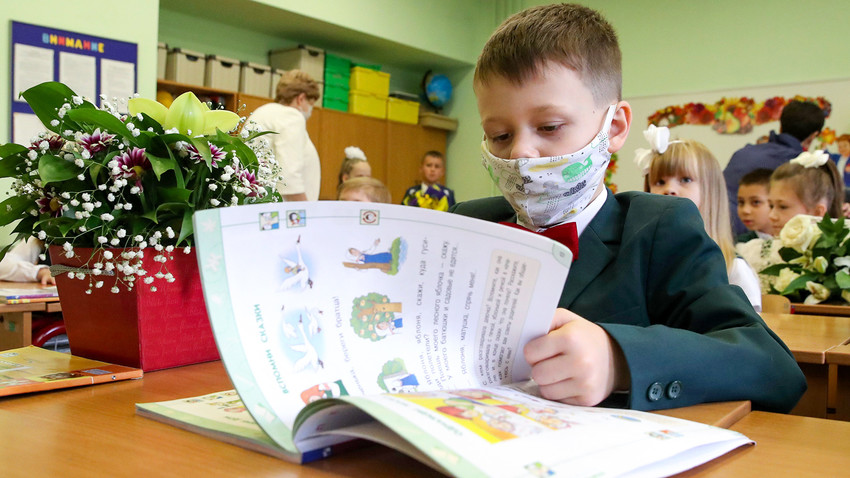 Vyacheslav Prokofyev/TASS
Timetabled use of school stairs and anti-Covid slots for entering school buildings. In line with tradition, schools in Russia opened on September 1 despite everything. Here is how they did it.

“Yesterday, I attended a parents’ meeting via Zoom. It felt like watching a movie. Something of a cross between a Woody Allen comedy of the absurd and a B-movie disaster pic from the 1990s. By the time the final credits rolled, I realized I was none the wiser,” journalist Roman said on his Facebook page, and got 8,200 likes from parents like him - who also had to attend parents’ meetings via Zoom and try to comprehend the new rules.

A month ago, parents in Russia didn’t know yet whether their children would go back to school at all. Amid talk of a second wave of the coronavirus pandemic, all the Education Ministry’s plans appeared to be hanging in the balance. People were looking for clues of any kind to second-guess what might happen: “An ominous sign. The head teacher asked whether any of the children needed I-Pads,” one worried mother wrote.

But on July 27, the authorities confirmed that on September 1, children would go back to school and that remote schooling was not being considered, despite the threat of coronavirus infection. To do this, new rules have been introduced in schools.

‘Timetabled use of school stairs’

According to the rules, children from different years will now arrive at school and start lessons at different times, and in the same way they will have separate break times. Each class will have an allocated classroom where all the lessons will take place (except for chemistry and PE). Only teachers will be able to move from class to class. As a result, children essentially won’t be able to meet pupils from other classes.

According to some parents, in order to prevent crowding of children, some schools have even introduced timetabled use of school stairs - different classes are allowed to use them at different times. Also, if possible, different doors are to be used for entering school. 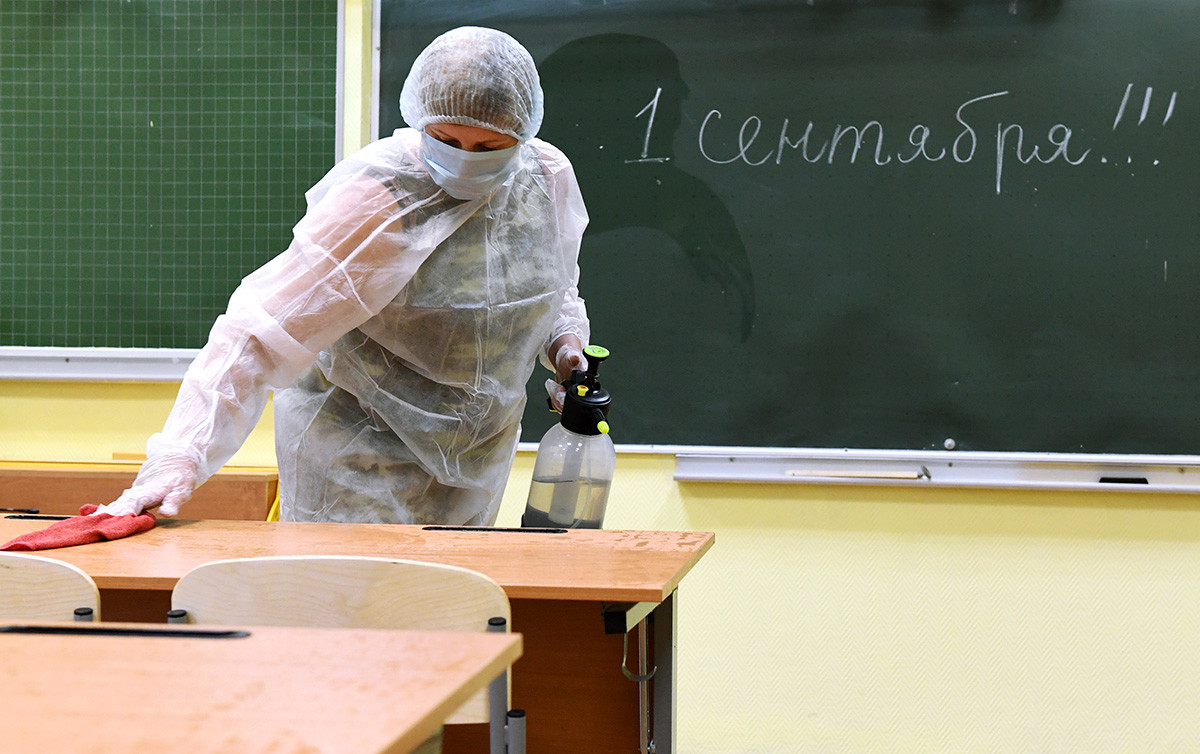 For those who have children at different schools, complying with the anti-COVID measures becomes a difficult feat to accomplish. “This question has been bothering me for a week now. Leva and Yasha go to different schools. Both schools have 15-minute anti-COVID timeslots during which you can enter the school building. You can’t do it before the timeslot. And you can’t do it after. There are 15 minutes between Leva and Yasha's 15-minute slots. One school is near Mendeleevskaya [Metro station] and the other at Sportivnaya [Metro station, in a different part of Moscow]. The question is: WHY ARE THEY DOING IT TO US?” Media manager Ilya Krasilshchik said on social media.

Isolating children from one another has affected extracurricular activities the worst - schools have had to cancel all after-school clubs. For some Moscow schools, according to The Bell website, preparatory courses for pupils were a source of income, because of their  narrowly-focused nature.

At the same time, there will be no strict face mask regime in Russian schools. Children can walk around without wearing face masks. With regards to teachers, they are required to wear them in school corridors and canteens, but it is up to them whether they want to wear face masks in classrooms. This is what Russian President Vladimir Putin had to say: “It’s not easy for teachers. We must understand this. Now would we find it easy if we were sitting here talking while having to wear face masks? After 10 minutes we would have felt very uncomfortable.” 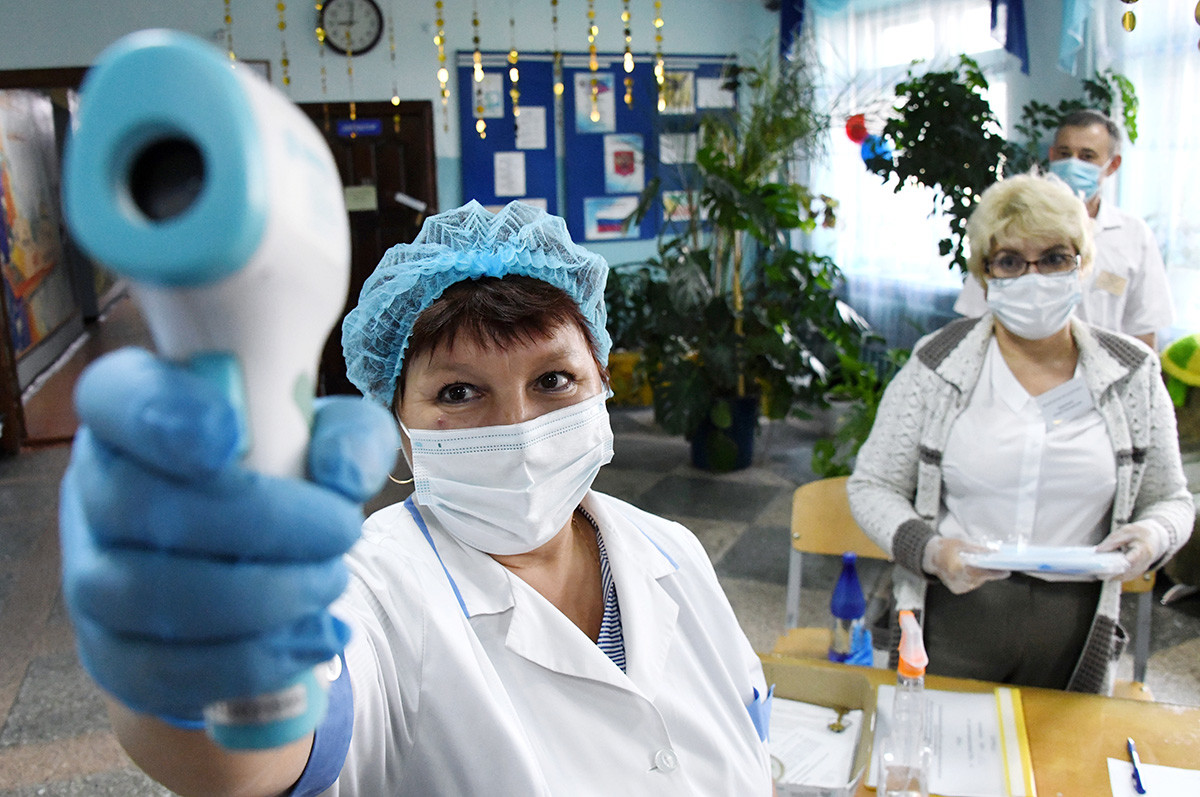 All other precautionary measures have been stepped up in schools, such as temperature checks on arrival, compulsory cleaning of premises with disinfectants during breaks, availability of hand sanitizer on all floors, treatment of canteen crockery, lavatories, etc.

As far as testing for COVID-19 is concerned, teachers and other school staff have all undergone compulsory testing. Children have not been tested for the coronavirus and parents are supposed to take them for testing themselves if symptoms should arise. There is no talk of vaccination yet either. Where possible, the first registered Russian vaccine, ‘Sputnik V’, will be given to elderly teachers first. According to Health Minister Mikhail Murashko, children definitely won’t be inoculated against COVID this year (we reported why it would be impossible here).

“We have been isolating for five months (my husband is in an at-risk category). It’s scary to send our child to school on September 1. I’m considering various options - including agreeing with the school head to allow our child to stay at home for at least the first quarter of the school year. In the worst case scenario, it would mean on-line learning permanently,” writes a contributor to a forum for mothers. Yes, parents’ “chat rooms are erupting” and schools themselves do not know how to observe all the recommendations, even though the people who don’t want to send their child to school are overwhelmingly in the minority on the same forums. 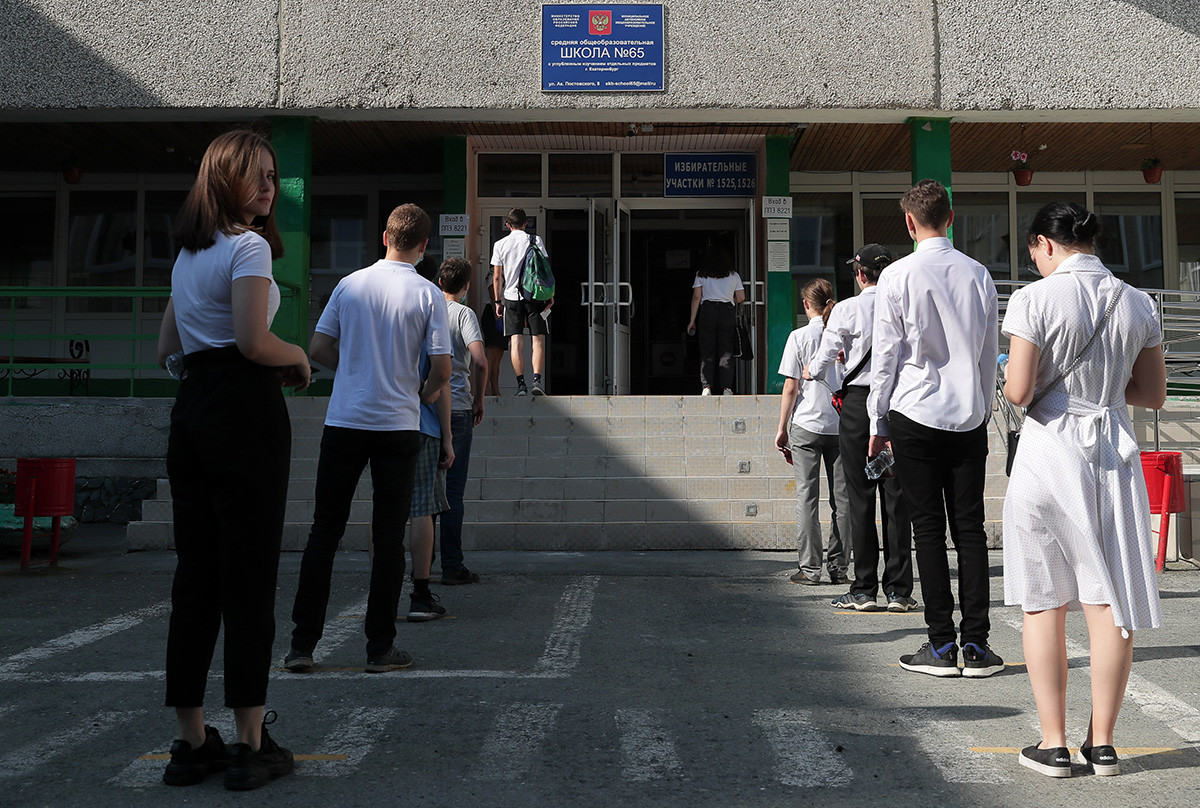 In an interview with The Bell news website, a federal education official says the authorities understand that both parents and children want to go back to school, and no-one had seriously considered the possibility that they would not return this autumn. This is particularly so in view of the fact that the experience of switching Russian schools to on-line teaching at the start of the pandemic in the spring was a complete failure - the Russian education system proved to be completed unprepared for such a move.

Russia lacks a single remote learning resource, and so the Education Ministry simply drew up a list of recommended internet services and asked schools to sort out the teaching process themselves. In consequence, the content of these platforms came under wholesale criticism, and the Russian version of so-called “remote learning” ended up being an imitation of the school classroom via collective Zoom sessions. There were no online lessons that could have been viewed from recordings or gone through independently; offline learning methods proved completely inappropriate for online working. 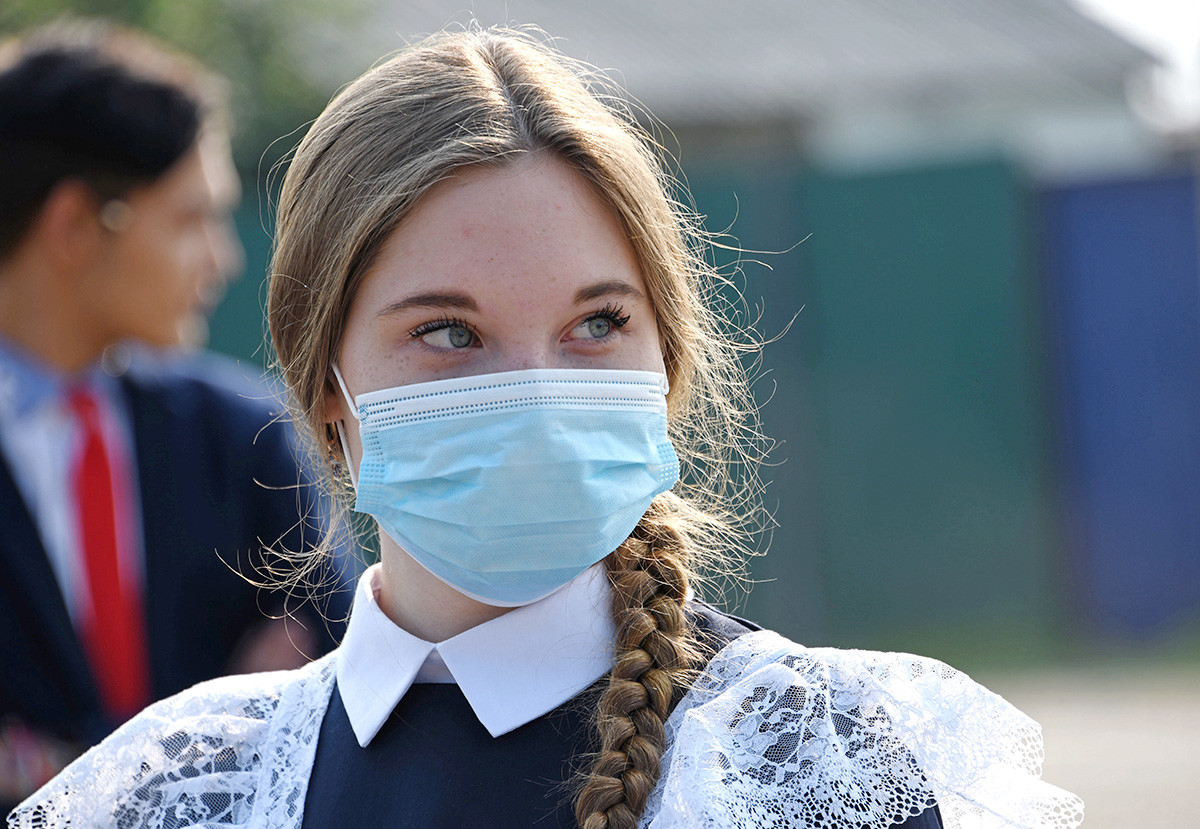 Things weren’t helped by constant service outages, pupils’ pranks and something so basic as the absence of technical equipment and access to the internet in every family. According to data from the Russian Federal State Statistics Service (Rosstat) for 2018 (more recent figures are not available), just 72.4 percent of Russian families have personal computers. With the onset of remote learning, in some remote villages not connected to the internet, pupils received their homework via the ordinary postal service. For this reason, the ministry even asked those regions with the worst COVID-19 infection rates to end the school year early for years 1-8. 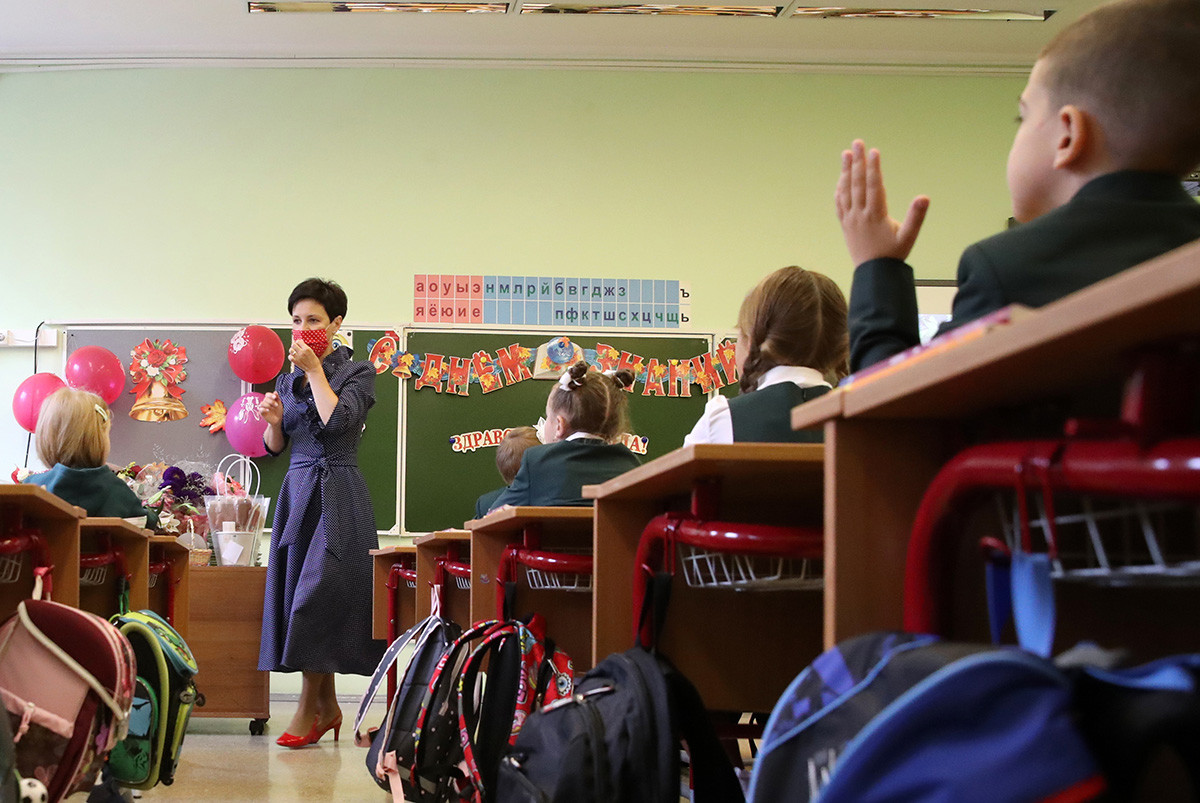 It is not clear for the time being what is going to happen in this school year if a second COVID wave arrives - officials say various options are being considered (including the very remote learning that everyone is now so intent on avoiding). For the time being, the procedure to be followed is that if the virus is detected in one pupil, the class in question will be sent for two weeks’ quarantine, and not the whole school. Many questions remain. “It cuts both ways: How can they put the children into quarantine without including the parents? What would happen if a teacher falls ill? We are all in contact, after all,” says a Moscow school teacher, expressing his puzzlement. The word in the school corridors is that the first two weeks will be crucial. After that, officials will be looking at the epidemiological situation and deciding. And those parents who decide not to send their child to school are being asked to sort something out directly with teachers and do “as they see fit”.