5 deadly animals of Russia: How to survive? 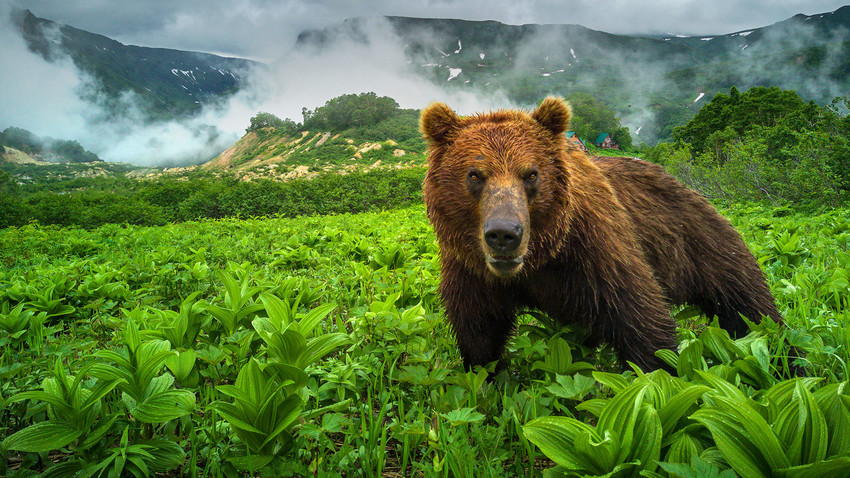 Getty Images
Many animals living in Russia are dangerous to people, but knowing how to behave correctly helps to avoid trouble. 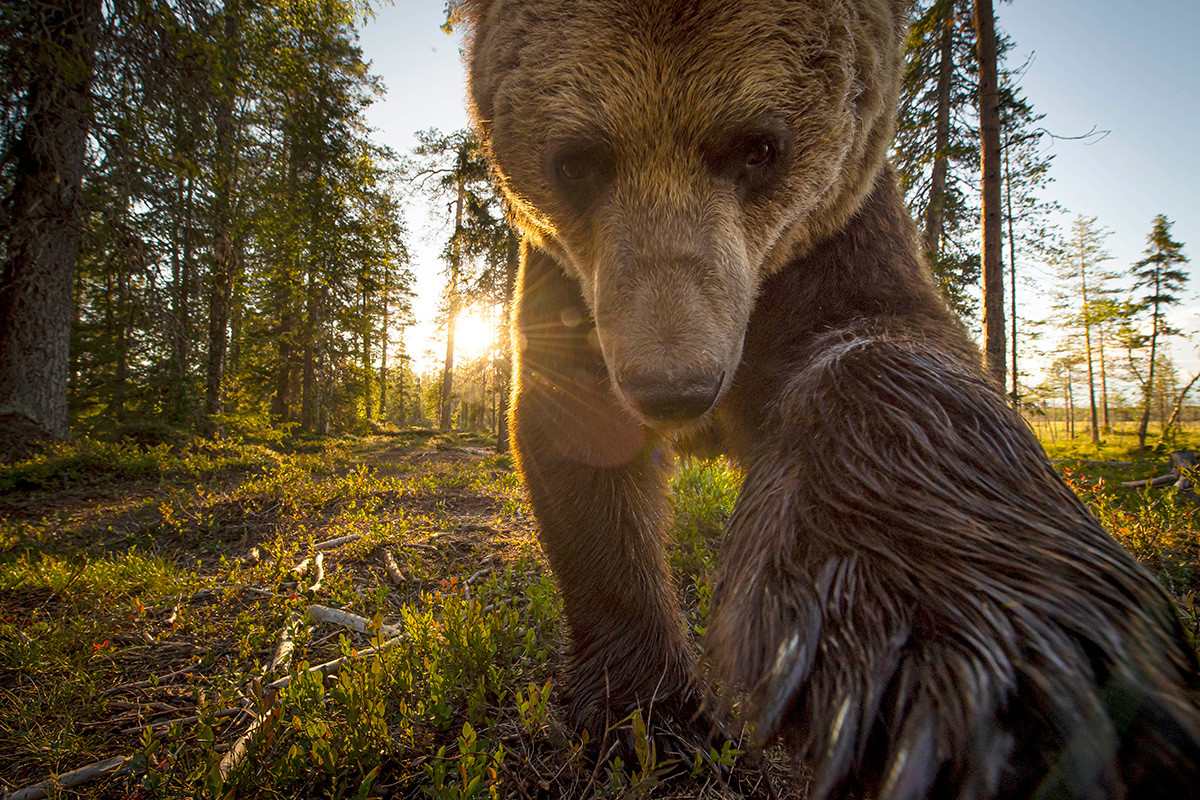 Brown bears have an enormous natural habitat in Russia. They can be found in all forest zones, including those that are located in mountainous areas, like the Caucasus in the south of Russia. They prefer thick forests, stay away from open spaces and keep close to rivers.

Brown bears attacked people in Russia 111 times between 2000-2015. They usually do it for self-defence, as they don’t hunt humans and try to avoid them. Bears with cubs, insomniac or wounded bears are the most aggressive. The easiest way to save yourself from a bear is not to encounter one. Singing, loud talking and other noises, especially in a group of people, help these animals stay away. If you walk into a bear, you must stop and stay silent. If it isn't moving, you can try to walk aside. If it starts approaching, you have to stop again. Talking to a bear in a low calm voice is a good idea, too. You mustn’t scream, run away or throw anything at the bear, as it will turn it aggressive. Most likely, it will leave you, but if the bear looks like it is going to attack, you have to pretend like you are dead: tuck yourself up on the ground with your face down, showing you aren't dangerous. 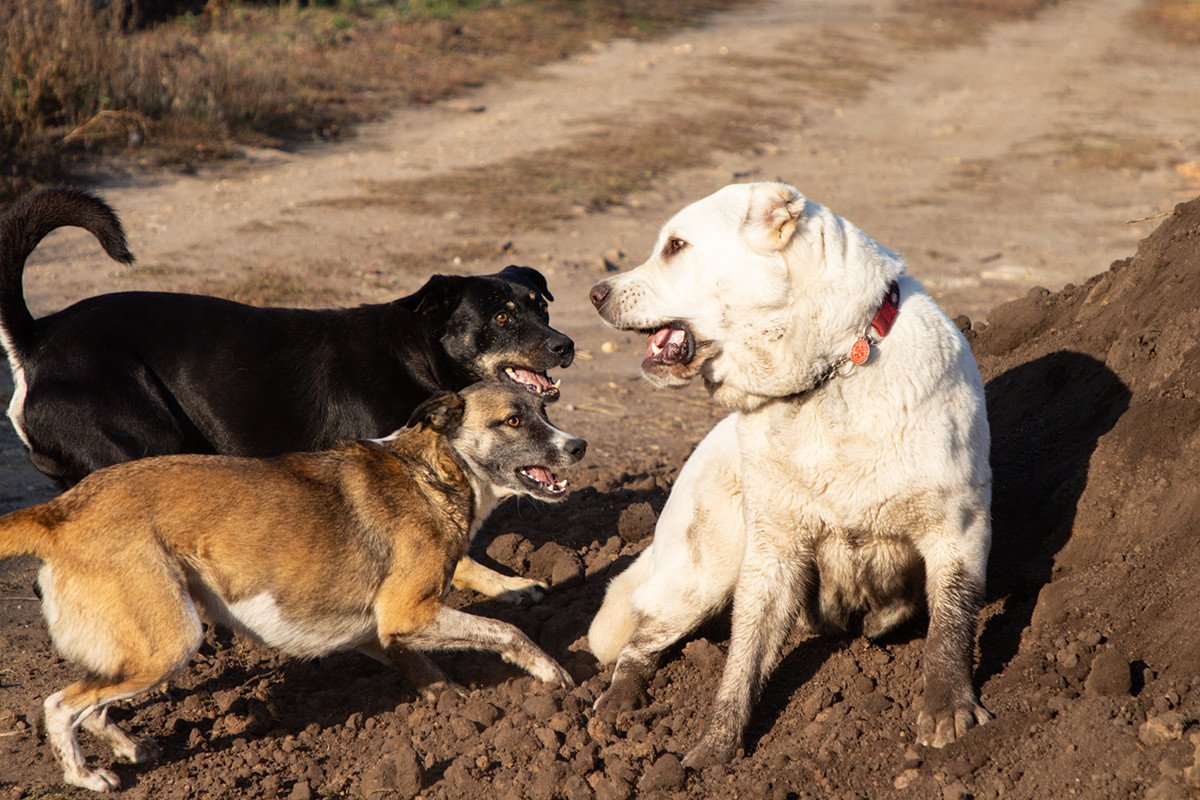 Stray dogs can be found anywhere in Russia near people’s lodgings, as they depend on human garbage to get food. Administrations across the country are constantly trying to manage the situation, but their efforts are not enough.

Dogs have rank scales, keep and defend their territories, so they can attack people if they enter “their” zone. According to official statistics, stray dogs killed 391 people between 2000-2010. Usually, dogs don’t attack immediately; at first, they show teeth and gnarl, so you can try to leave the spot slowly. The best way is to join a group of people. If you can’t, you mustn’t run away, scream or brandish anything you have in your hand - it will provoke the dog to attack. Dogs usually attack from the back, so you should face it at all times. The best idea is to find a tree or a fence to cover your back. If you can, you should climb this obstacle. It’s also possible to use an umbrella or a bag to defend from bites. If you can’t avoid a fight, the best way is to hit the dog on the nose or with a plastic bottle to make it lose orientation. After that, you should call for help. A group of people will make the dog(s) run away. 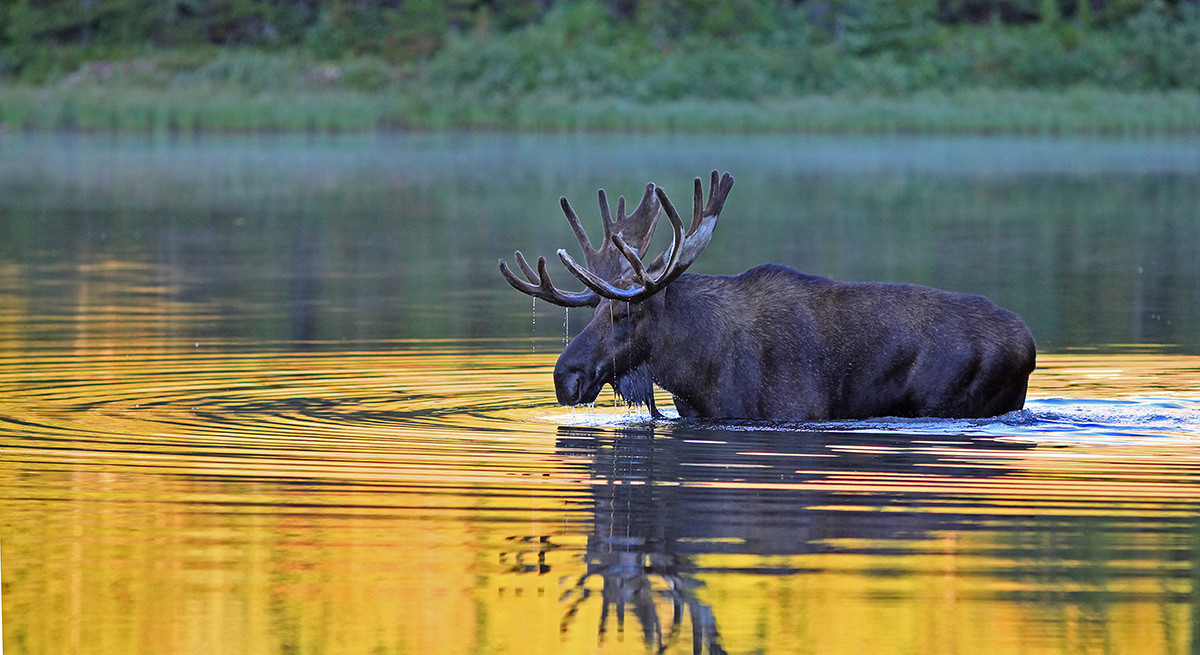 It would seem to be odd that elks are included on this list, because they are not predators, but naturally, they are very fearful and attack anyone who seems dangerous to them. Elks are now a protected animal species. In the past, they inhabited the forests all over Russia, but by the beginning of the 20th century, their population was destroyed in Siberia, so now they live only in the European part of the country (the regions to the west of the Ural Mountains). Elks often appear in towns and even big cities, especially in Moscow, often coming out of ‘Losiniy Ostrov’ (“Elk’s Island”) national park.

Elks only attack people in self-defence, but they are very easy to scare: even an uncareful hand wave can be considered as a sign of danger. They don’t hesitate to attack predators, because the elk’s size is an advantage. An elk’s kick, meanwhile, can be fatal. So, calmness is key to avoiding trouble. If you come across an elk, you mustn’t approach it, let alone try to feed or take a picture; you have to increase your distance by moving back slowly, so it understands you are friendly. If you see an elk calf, you should leave the place: if its mother appears, she will be aggressive. 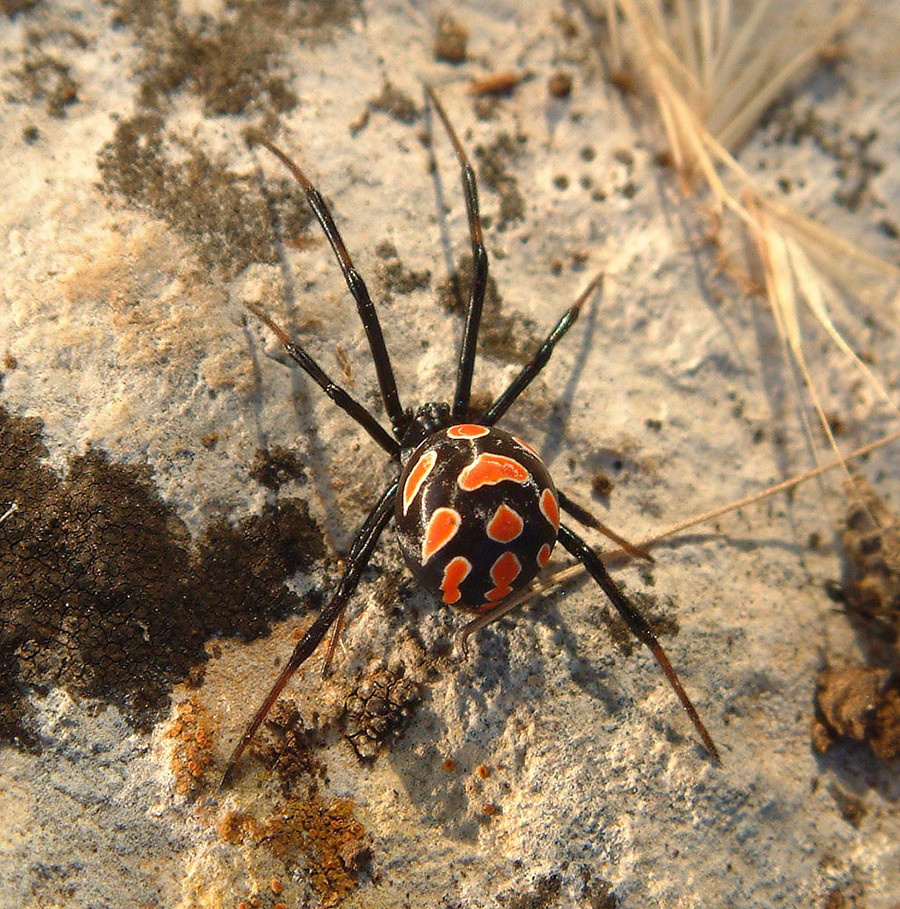 Karakurts use their poison for defence and bite people if they touch or hurt them by chance. Thankfully, karakurts are often easy to recognize: they have big black round bodies with vivid red spots, but sometimes they can be totally black. Attention can help avoid trouble, but it is also important not to walk barefoot in the regions where karakurts live. The potency of its venom is individual for each spider and depends on the area stung: arms and legs are considered the least dangerous. The best first aid is to immobilize the stung area and to keep the injured person at rest. The venom causes a complex of health problems, from weakness and sickness to mental problems. Recovery usually takes about three weeks, however 10-15% of people bitten have died. 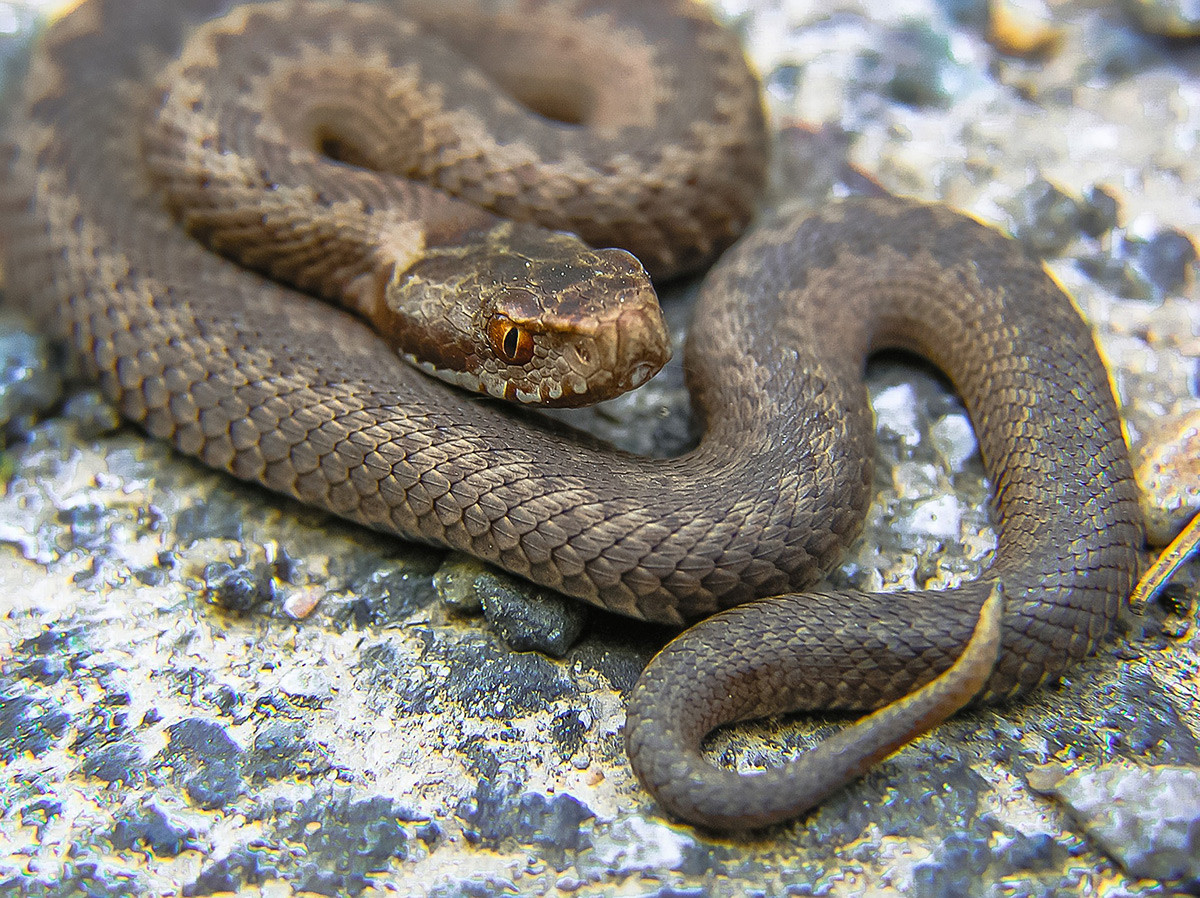 There are a number of species of adders in Russia, and they are spread practically all over the country: in forests, heaths and semi-deserts. However, you’re most likely to find an adder near a river or a fallen tree.

Common adders aren’t really deadly to healthy people, but their bites can be very harmful to children, elderly people and people with allergies. Moreover, a bite into the neck increases the danger, although that is unlikely to happen. The species that inhabit heaths have a more toxic venom. Adders can bite people in self-defence and usually try to hide. It often attacks after an abrupt movement or an attempt to catch it. It’s also easy to step on one by accident or get bitten in the arm while picking mushrooms. If you see an adder, the best way is just to let it pass by. Moreover, it is important to wear rubber boots and long sleeves and trousers of dense texture, as these snakes aren’t strong enough to bite them through. If an adder attacks, it is important to calm the injured person down, as it helps to ease off the venom. This is the only first aid. Also, people often mix up common adders and grass snakes that aren’t venomous. Grass snakes usually escape and don’t bite and have round eye pupils, while adders’ eyes resemble those of cats and it’s nose is pointier.