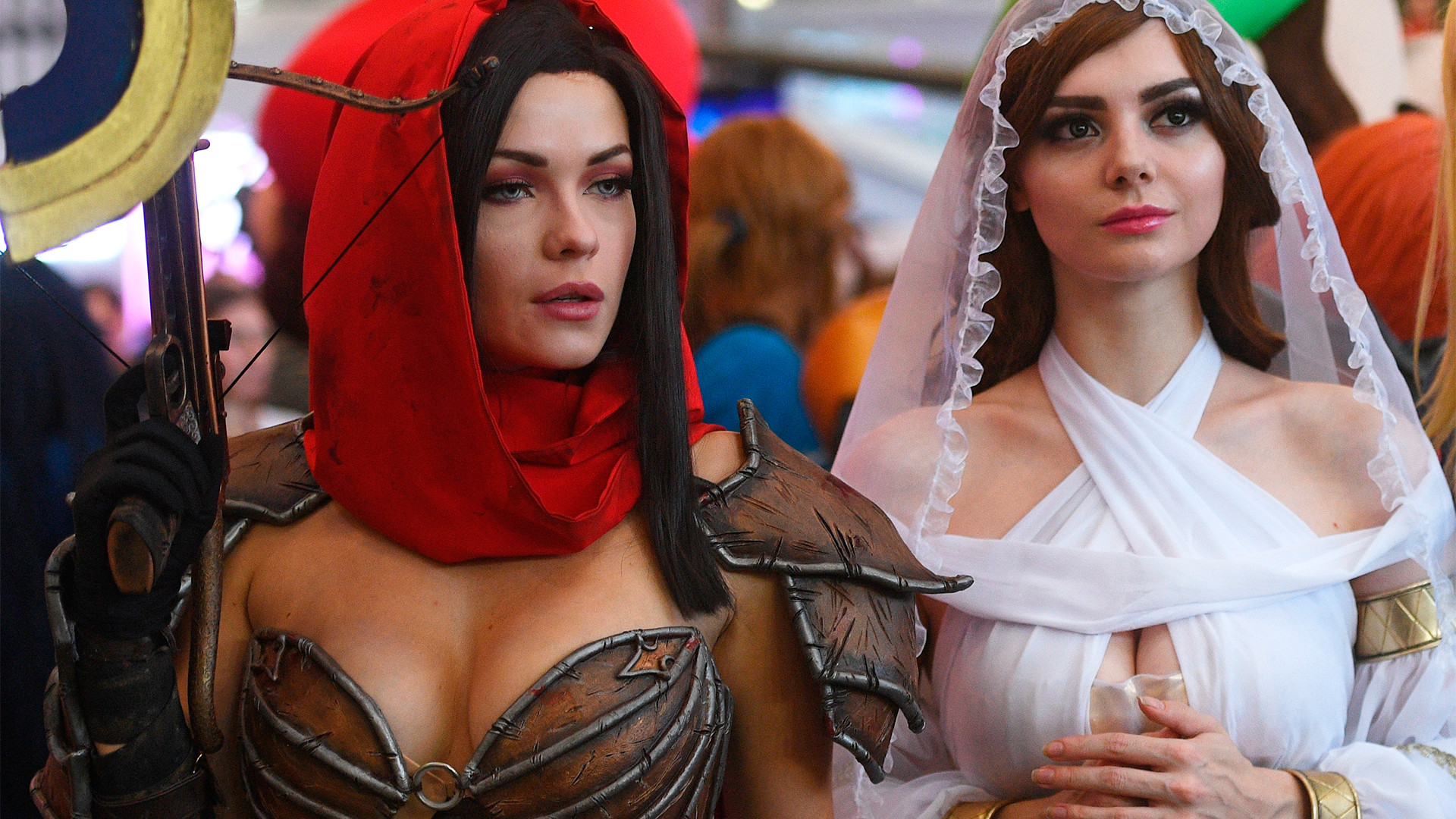 Participants of the Comic Con Russia 2018 in Moscow

Evgeny Odinokov/Sputnik
From Hermione Granger in the Harry Potter series to Lara Croft to the worst monster from the Witcher’s universe – here are some of the fascinating images created by the most popular (and insanely beautiful) Russian female cosplayers.

The real name of perhaps the most popular cosplayer in Russia is Irina Pirozhnikova. She was born in Ukraine in 1997, but moved to Moscow Region as a teenager, according to the website Championat.ru.

Irina became interested in cosplay when she was 11. In an interview, she said that her other hobby was dancing, that she was a professional make-up artist, had studied advertising in college and was spending her free time modelling and playing the game Skyrim.

Irina has cosplayed Babydoll from Sucker Punch, Dota 2, Harley Quinn from Batman: Arkham Knight, Sonya Blade from Mortal Kombat X, Supergirl, characters from The Witcher, Lara Croft and many others.

Zhanna does not share details of her private life, so only her friends know when and where she was born, where she grew up and which university she attended.

However, in the Russian cosplay community, she is known as the first Russian cosplayer to have turned her hobby into a successful business, according to the Geek`s Way: Cosplay & Stuff publication.

Zhanna has been practicing cosplay and making wigs to order since 2009. She also runs a website selling prints, posters and other merchandising, as well as a photo studio for cosplayers.

The list of characters she cosplays is endless: it includes not only female characters from The Witcher, Prince of Persia, X-Men, Silent Hill and other movies, video games and television series, but also male characters, such as the Joker.

Ilona is from St. Petersburg. She developed an interest in cosplay in 2014, when she, together with some friends, visited a pop culture and cosplay festival.

He then decided that she would be attending the next festival in character: she made her first cosplay appearance as Elizabeth from the video game BioShock Infinite.

“My friends unanimously proclaimed that I was a spitting image of Elizabeth and that if I didn’t cosplay her, I would be making a big mistake. It so happened that on the day after the festival I downloaded BioShock, had a go at it and fell in love with this character. So a month later, I attended a festival as her,” Ilona recalled in an interview with Metro newspaper.

Bugaeva has built an Instagram following thanks to cosplaying Hermione, Belle from Beauty and the Beast, Khaleesi and other characters. Soon, Ilona began to receive invitations to international cosplay festivals. She says that most of her fans are based abroad.

In addition to cosplay, Ilona is busy studying at the St. Petersburg State University, where she is doing a degree in psychology.

As a child, Anastasya, who comes from Ivanovo, dreamt of becoming a ballerina. However, in her small city, there were no opportunities for training as a ballet dancer.

So, she became interested in cosplay at the age of 15 and gained popularity thanks to cosplays inspired by Lara Croft video games and movies.

“It all began back in 2008, when I did not really know what cosplay was. I saw pictures of girls dressed as Lara Croft and decided that I must try it, too.

That same year, I made a Lara Croft costume for a mobile phone photoshoot. Today, memories of that photoshoot bring a smile to my face,” Anastasya recalled in an interview.

In her free time, Anastasya does dancing to keep fit and, in 2018, she set up a cosplay talent agency, where event organizers can hire cosplayers.

Elena comes from Novosibirsk. She began doing cosplay in 2014. In one interview, she said that before then she had been creating images for photoshoots and various theatrical productions.

She recalled that at school she weighed some 100 kg, but managed to pull herself together and managed to lose 38 kg.

Elena prefers cosplaying horror characters. She always develops the costume and make-up of a future character with great attention to detail and often uses plastic makeup. In some of her characters, she is practically unrecognizable.