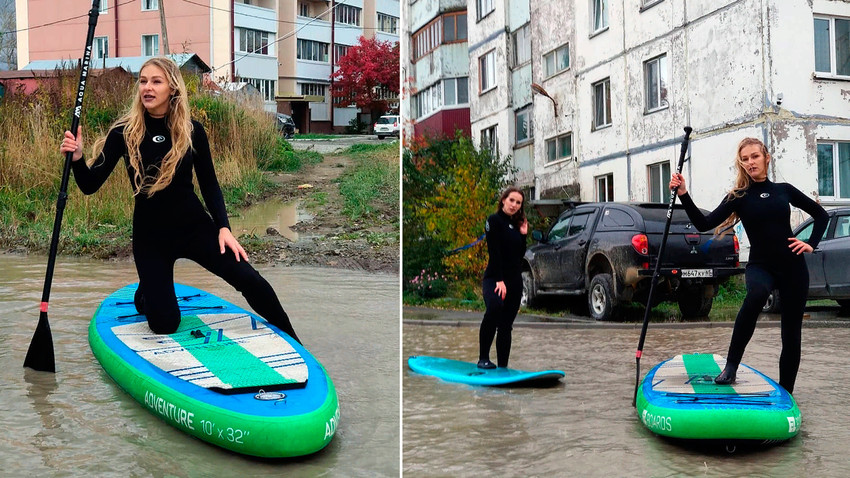 @marikot25/@sereda_blog/@milenaisterika/@ya_luzha_u_doma
This puddle of mud in Yuzhno-Sakhalinsk is invincible. For more than two decades, it has refused to succumb to drying out. So, one of the locals deemed the legendary puddle was old and wise enough to have its own... Instagram account.

Local resident Nikolay recently decided to give the puddle its own account, as it’s long become a local place of interest.

The puddle first appeared in distant 1994 and people seemed to simply have better things to do than fix it for good. In 2014, locals asked the local administration to rid them of the nuisance once and for all; however, the street works have constantly been postponed - first, to 2017, then, most recently, all the way to 2024!

The decision must have been the last drop for the puddle, which logged on with the words: “Hi, everyone! I’m the puddle near Tikhookeanskaya Street 10, Yuzhno-Sakhalinsk. I’ve just turned 25, it’s time to conquer Instagram like a grownup! :)”

In four days, the page received 3,000 visitors. The wet landmark also immediately attracted the attention of local media, as well as the administration. After about a week, workers were dispatched to flood the puddle with sand.

“Looks an awful lot like dry mud that’s been worked with heavy construction equipment” was a sceptical comment from the puddle. “We’ll see each other again during the next rainstorm.”

The puddle was right and the legend was resurrected a week on from that comment.

“What’s up! Missed me? I missed all of you, too. So much, that even that weird blanky they tried to cover me with couldn’t hold me back. Today is a wonderful rainy day, so, if anyone wants to come say ‘Hi’, I’ll gladly welcome them! We’ll have fun, there’s enough of me for selfies with everyone!”

By the end of October, the puddle became a staple site for ironic photo shoots. It even asked the authorities to include it on the list of local tourist attractions.

The Yuzhno-Sakhalinsk city hall has returned the puddle’s requests for communication over Telegram: “Good evening, dear puddle! We have already been introduced. Moreover, you are well known in specialist circles at the city’s agricultural department. We have good news for you.” The puddle was scheduled for removal in 2024, but it appears the timeline has been moved forward to 2022.