Russia’s main New Year’s tree: From the forest to the Kremlin 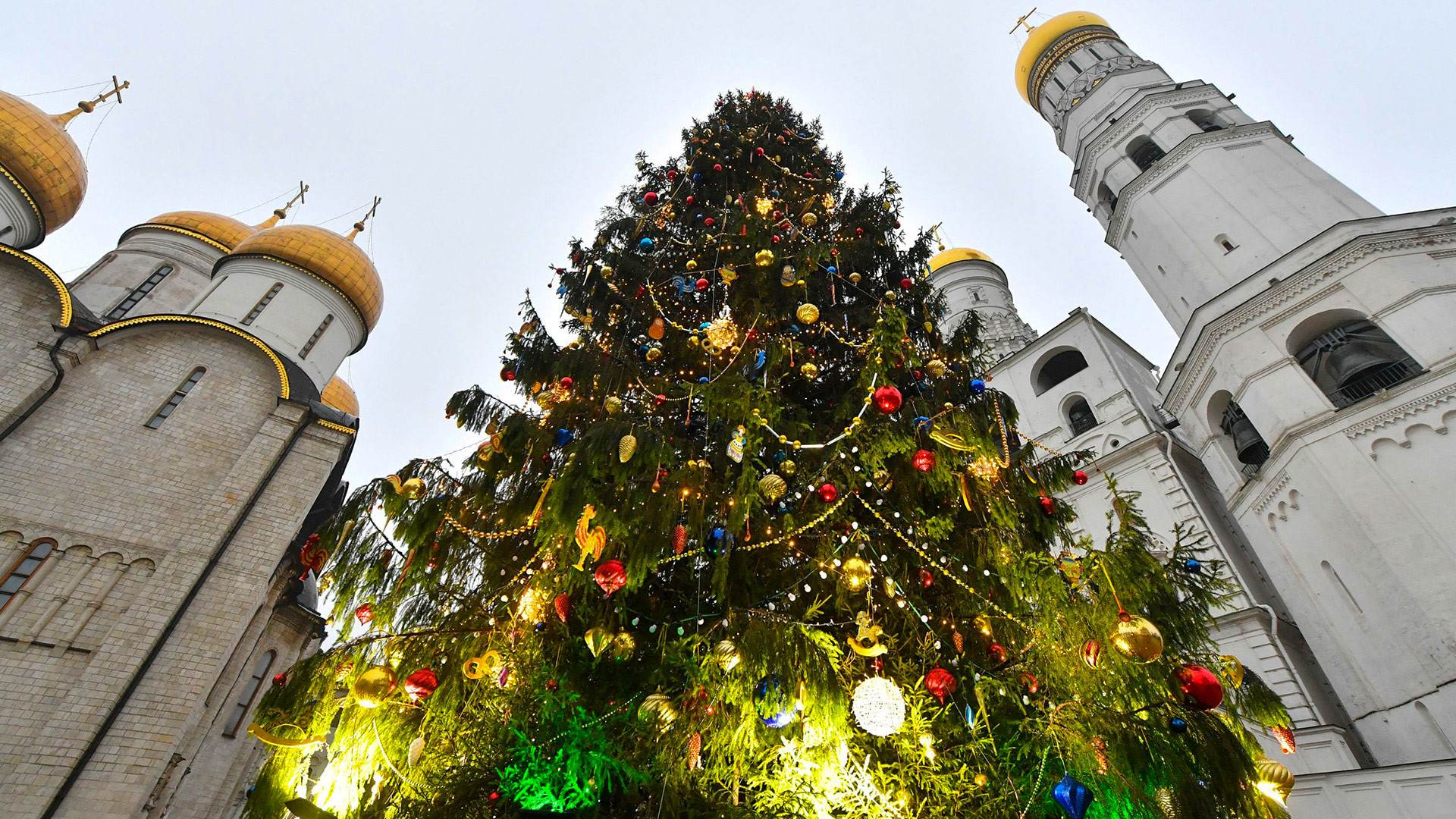 Sergei Kiselev/Moskva Agency
It’s a tradition to set up the country’s main New Year’s tree within the walls of the Kremlin. But where does it come from and how is the fir tree prepared and decorated?

Russia has an annual tradition of choosing, decorating and displaying the country’s main public New Year’s tree. Nowadays, it stands in the Moscow Kremlin, but earlier, there were different locations.

The New Year’s tree was first brought to Russia by Peter the Great, but after his death the new tradition was given up, so the first public New Year’s tree was only put on display in 1852. Predictably, it appeared in St. Petersburg, as it was the capital at the time. It stood inside the Moskovsky railway station building (at the time it was called Yekaterininsky). Later, more trees started appearing in other locations of the city. Additionally, noblemen and manufacturers would organize New Year parties for children. 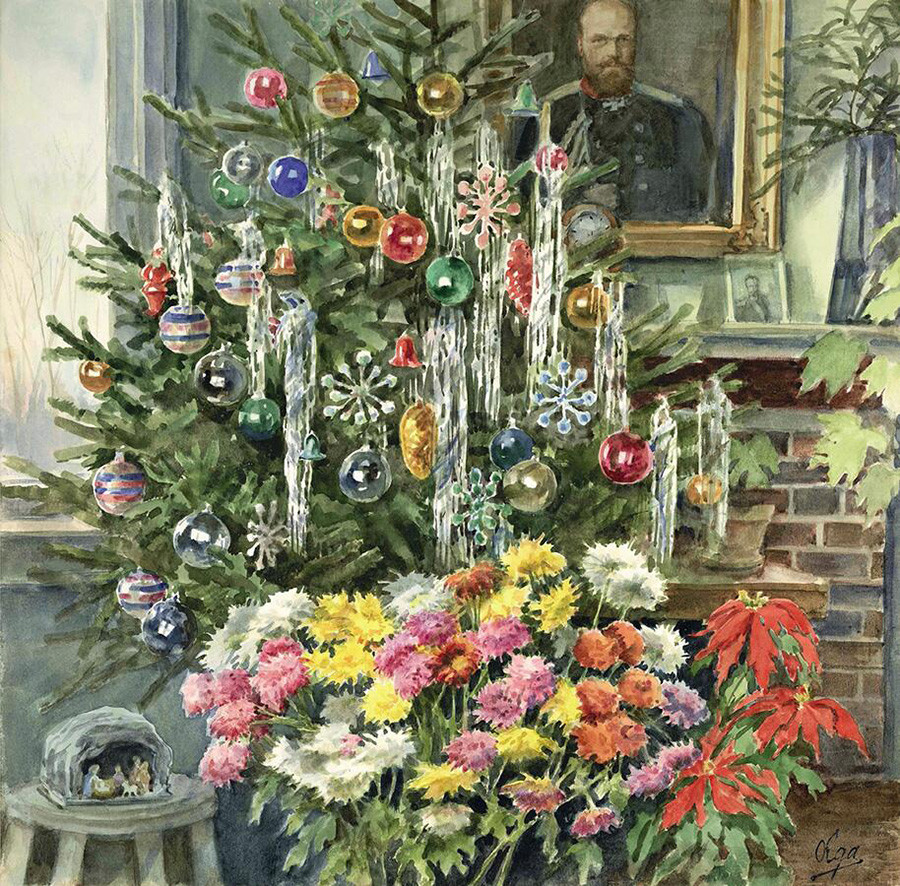 O. A. Romanova, "Christmas at the Grand Duchess Olga Alexandrovna with a portrait of Alexander III».

After the October Revolution in 1917, the tree was “legalized” again, but only until 1926, when the New Year was deemed a bourgeois holiday and banned. In 1935, the celebrations came back and, three years later, a 15-meter-tall tree appeared in the Pillar Hall of the House of the Unions at Bolshaya Dmitrovka Street. Two years after that, the first celebration for children was held there and it continued even during World War II. In 1955, the country’s main New Year’s tree was moved to the Grand Kremlin Palace and children’s parties began being held there, too. After the opening of the State Kremlin Palace in 1961, both the tree and the celebration were moved there. This tree was always real. It’s usually cut down in the Istra forestry in the Moscow Region (50 kilometers north-west of Moscow). 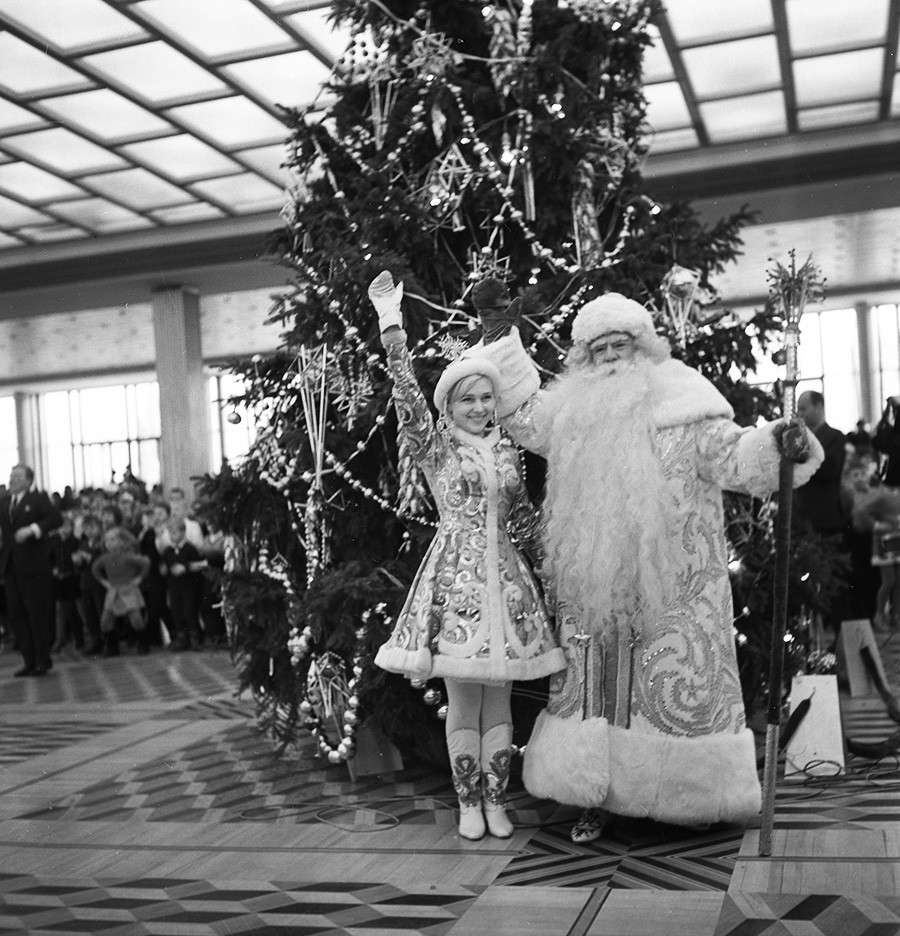 In 1996, the tree returned to Sobornaya Ploshchad after being recommended by the then Russian president Boris Yeltsin. In 2001-2004, however, a fake New Year’s tree was put on display, due to severe winters. When the cold is strong, the fir branches can easily break. In 2005-2006, a real tree was brought from Veliky Ustyug (750 kilometers north-east of Moscow), the home of Ded Moroz (“Father Frost”). Since 2007, the trees have been picked out of chosen in the forests of Moscow RegionOblast.

There is a special commission that chooses the main New Year’s tree fir of Russia. These experts work for several weeks and pay special attention to the tree’s appearance. It must be a fir with a regular shape of a pyramid, without curvatures and holes in the crown, while the color of the needles must be bright. The tree must also be tall and about 100 years old. According to the experts, a fir that has lived about a century is already quite old and will soon become weak and vulnerable, so it can be cut down without ecological concerns. 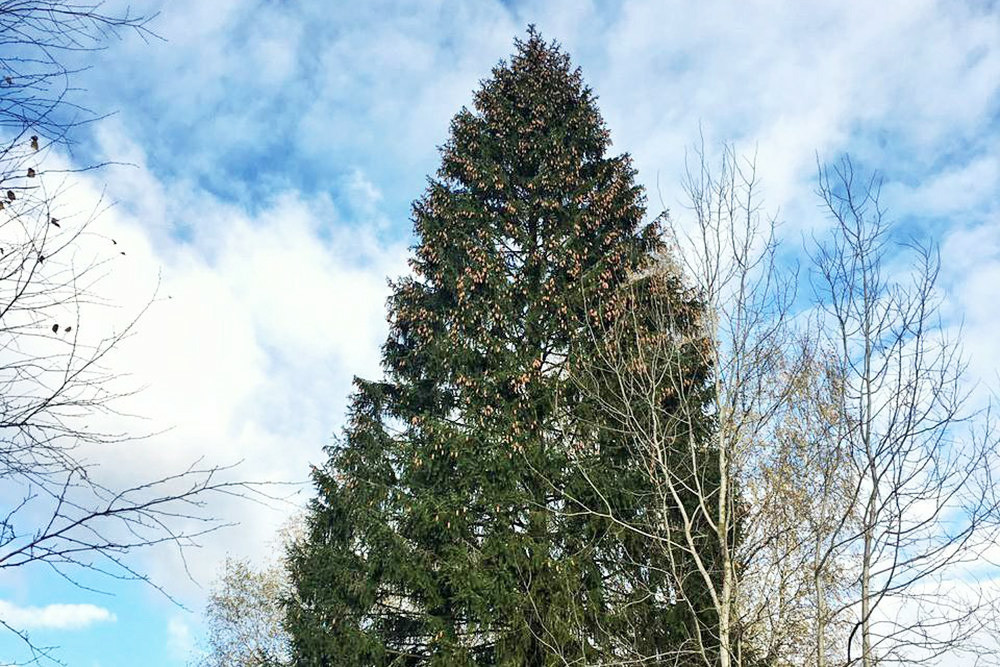 Also, the tree will have to keep its good appearance for some weeks after being cut, so it still has to be strong. The experts check to see, if the fir isn’t decaying, has no broken branches and cracks in the trunk, which must have a diameter of 60-70 centimeters at the place of cutting. The needles and the tree itself must be completely healthy. 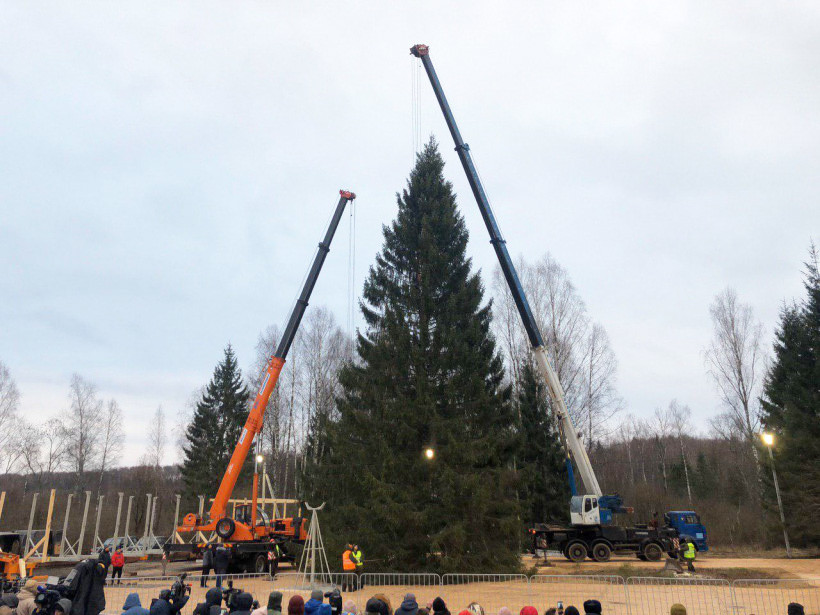 The Ministry of Environment of the Moscow Region

The condition of the fir is checked by technological means. Specialists used to use a thin borer, but, in 2020, they used a resistograph - a thin needle with an electric current. Good electrical conductivity indicates the tree is healthy and its trunk isn't rotten inside. The fir tree’s location is also important. It must stand at the edge of the forest, so it is easily accessible.

Usually, tens of trees fit the criteria and the commission chooses the best fir and 1-2 extras to be on the safe side should something happen to the main tree. In 2020, the best fir was cut on December 9., It’sit's 96 years old, approximately about 25 meters tall, with a trunk diameter of 60 centimeters and a 10-meter branches' spread is 10 meters. 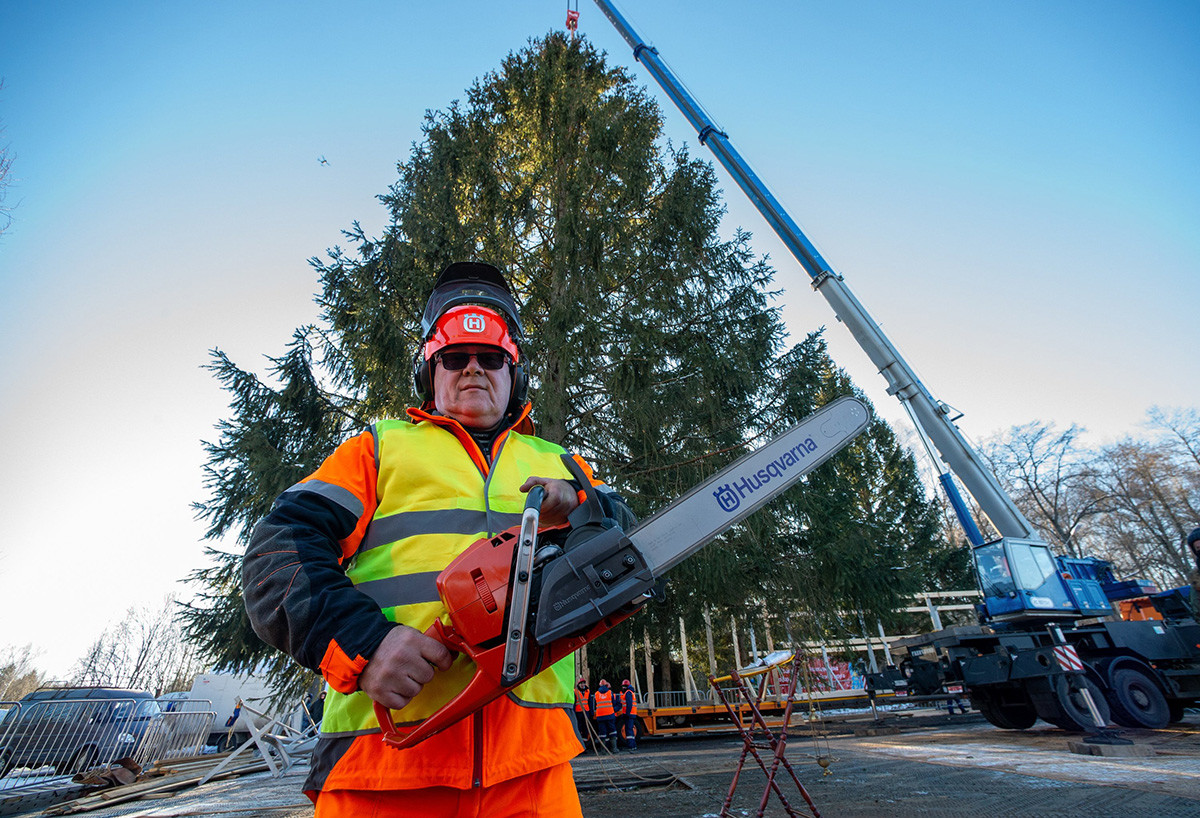 The delivery of the tree is made by the same company for more than 15 years, so the workers are experienced enough. After the festive cutting, the fir is installed on a special framework and then fit into a container on a truck, where it is practically hanging, and the trunk doesn’t touch the floor - everything is done to prevent the fir getting broken and losing its ideal appearance. By the way, this was the reason why the idea of bringing the Kremlin New Year’s tree from Veliky Ustyug was abandoned: the road took some days and the fir tree got damaged once. 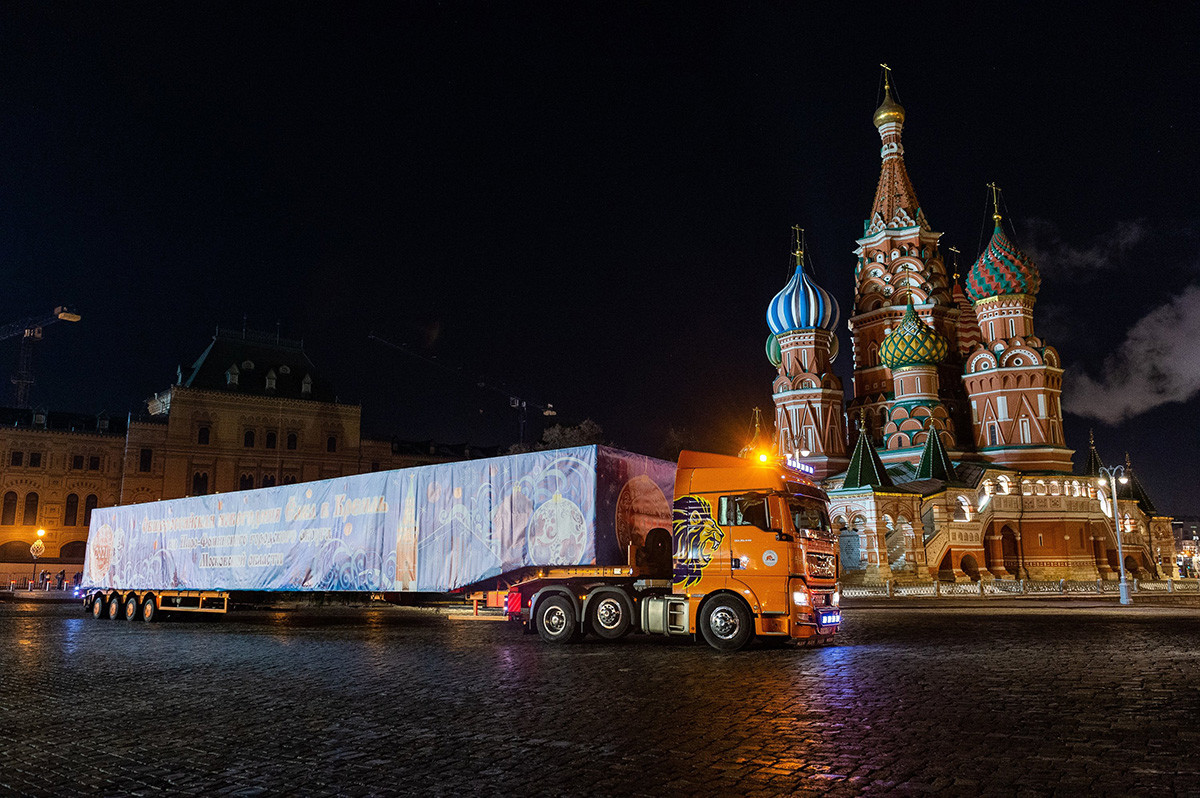 The truck driver is traditionally dressed as Father Frost. The tree gets inside the Kremlin through the Spasskie Gates, which are usually closed for vehicles. This is the most difficult transportation moment: the gates are just a few inches wider than the truck, so the driver has to be extremely careful to fit into them. After the delivery is finished, the fir tree is installed at Sobornaya Ploshchad. In 2020, it happened on December 11. 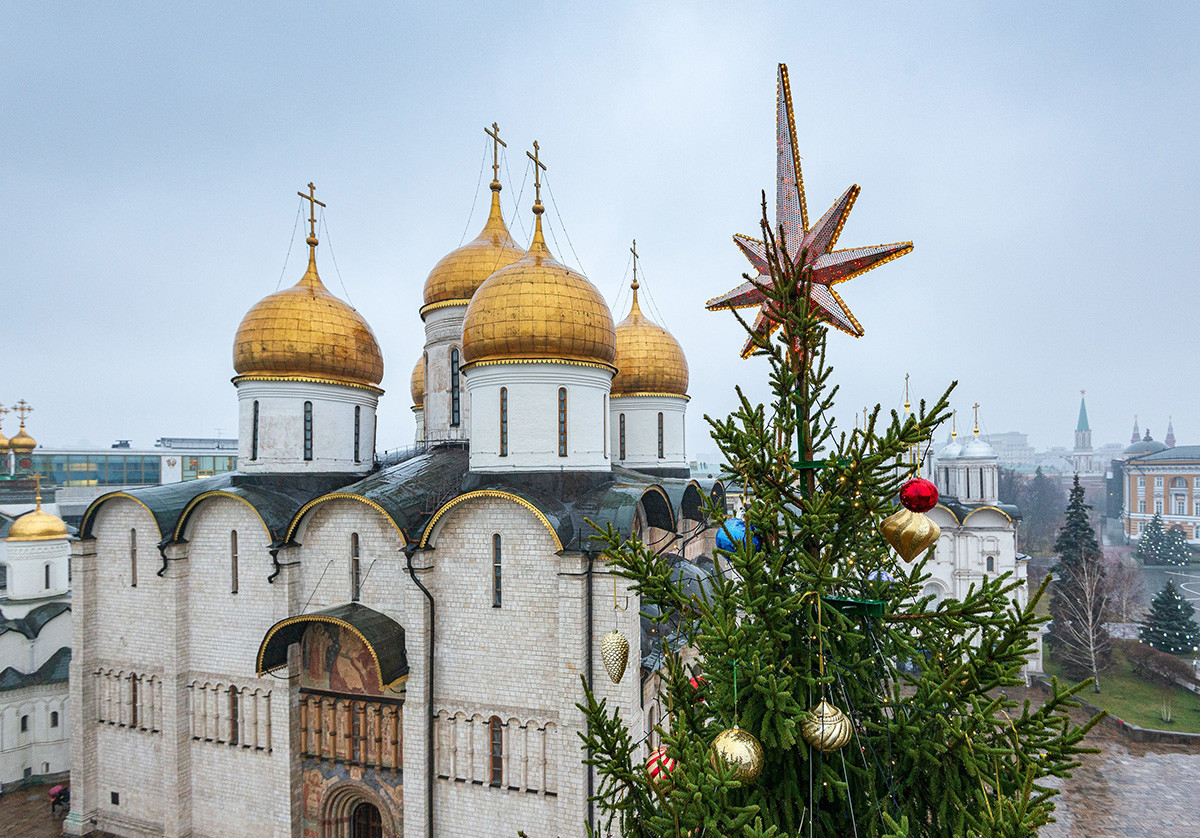 The decoration of the Kremlin New Year’s tree takes several days (in 2020, it is expected to be finished on December 21). There are canonical parts of the decoration: about 200 blue, red, golden and white glowing baubles and white, blue and red garlands that represent the Russian flag on the tree. In 2019, there were 1,800 meters of garlands and in 2020, it’s promised to be even more. A huge red star at the top of the fir tree is obligatory, too. 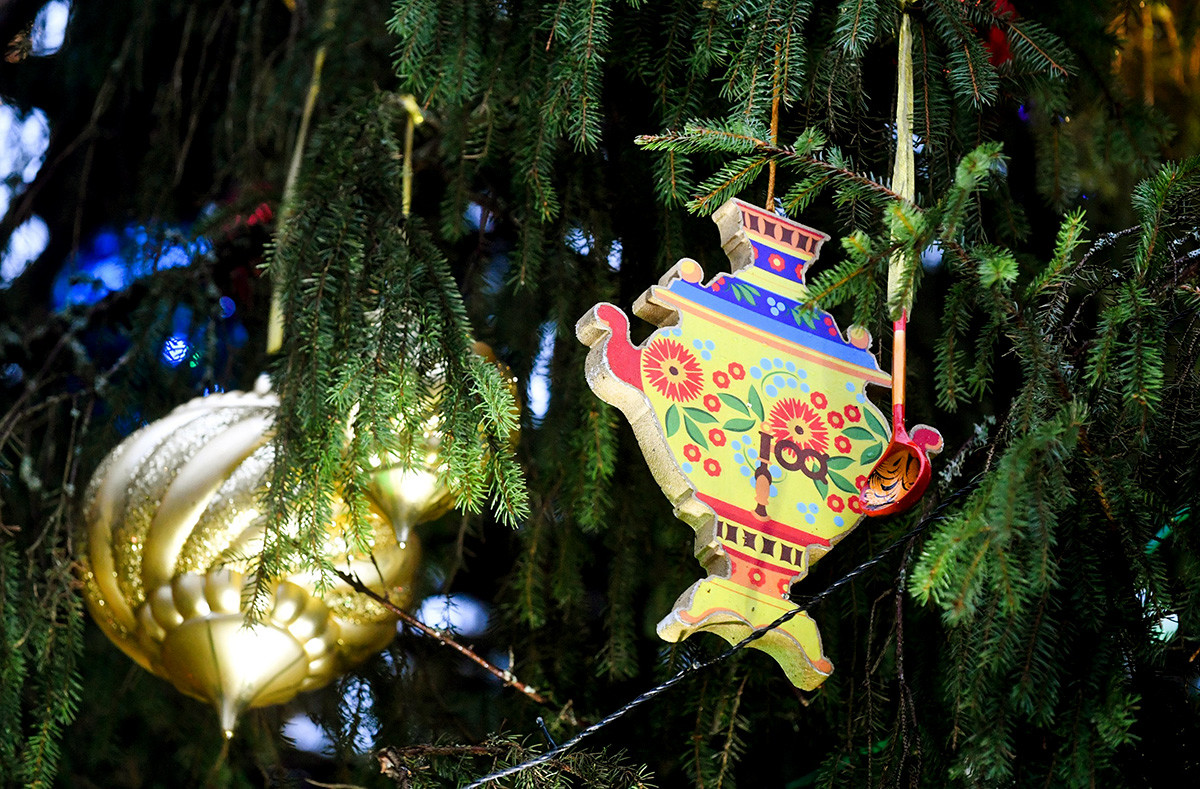 Also, there are also some special decorations every year. The secret is kept until they appear. For example, in 2019, the New Year’s tree was decorated to mark the twentieth anniversary of the main Kremlin ‘yolka’ party for children. This is why many ornaments that year were made by children from the school of art based at the Surikov Moscow Art Institute. There also were many elements dedicated to folk culture: matryoshkas, samovars and golden cockerels. There were more than 2,100 decorations in total. 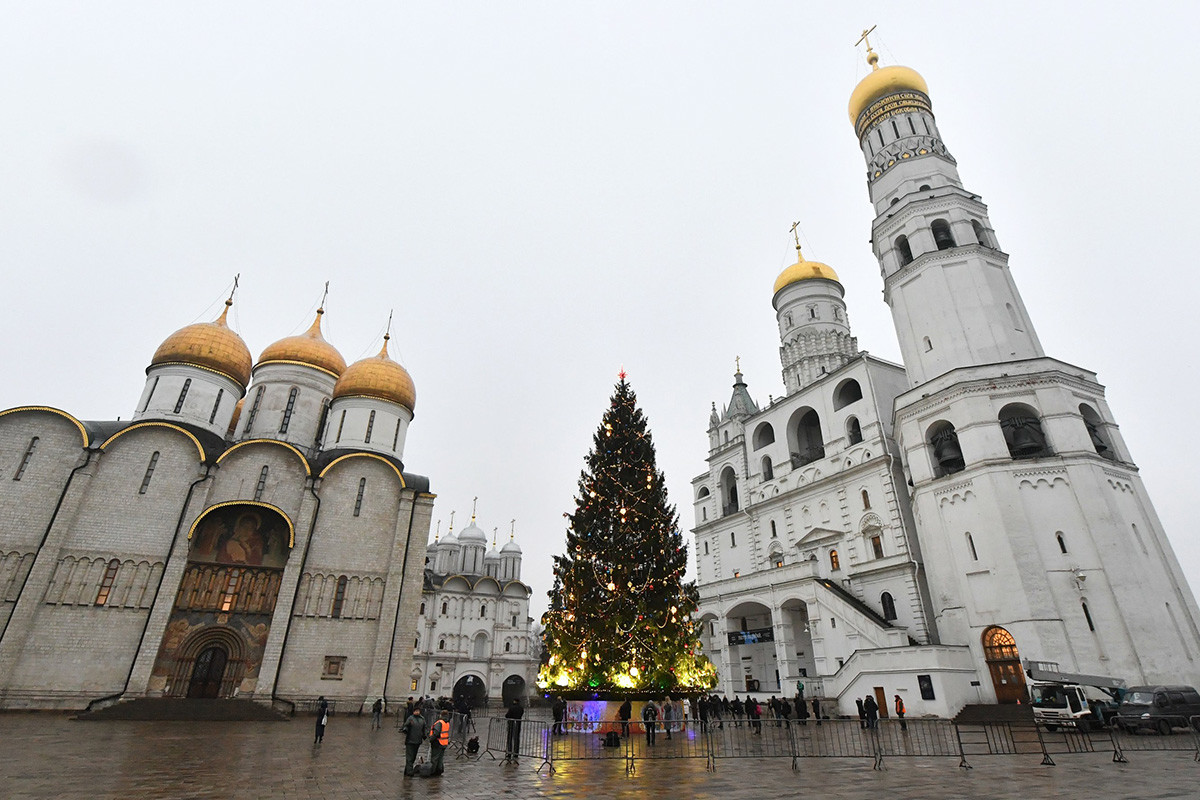 Since 2007, when real New Year’s trees started to be annually delivered from Moscow Region, they have come from different forests, but most often from Istra forest - three times. They have also been cut from  Mozhaysk forest (104 kilometers south-west of Moscow) and, like in 2020, from Naro-Fominsk forest (70 kilometers south-west of Moscow). The fir tree that was chosen for Sobornaya Ploshchad in the Kremlin this year is the shortest and one of the youngest New Year’s trees. The years 2017 and 2019 saw the youngest trees (at 90 years old) on display, whereas in 2013 and 2015, the oldest ones at around 120 years of age were chosen. And the tallest tree appeared on Sobornaya Ploshchad in 2011 - it was estimated to be 34,5 meters tall.