14 Russian ads with Hollywood stars without them knowing! (PHOTOS) 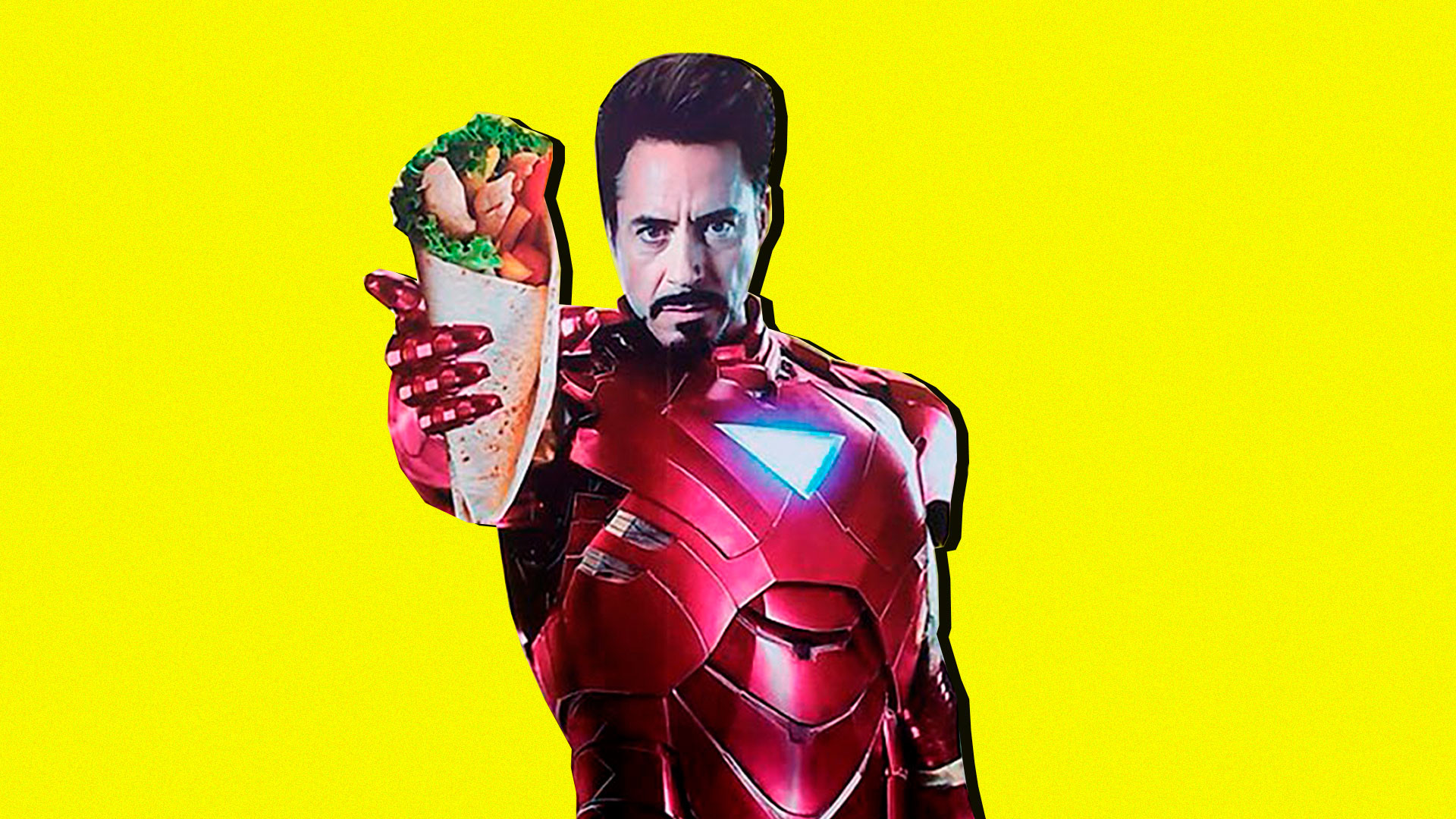 GIPestel/pikabu
Now you know where Sylvester Stallone’s favorite pancakes are made and where to try shashlik by Hugh Jackman!

Celebrities often sign advertising contracts with big companies, but clearly not in these cases.

1. This pancake cafe called ‘Solntsepek’ (“blazing sun”) in Ulan-Ude, Buryatia, became famous on the Russian-speaking Internet thanks to an extraordinary banner in which Sylvester Stallone is depicted next to Russian pancakes with red caviar and an Orthodox church in the background. 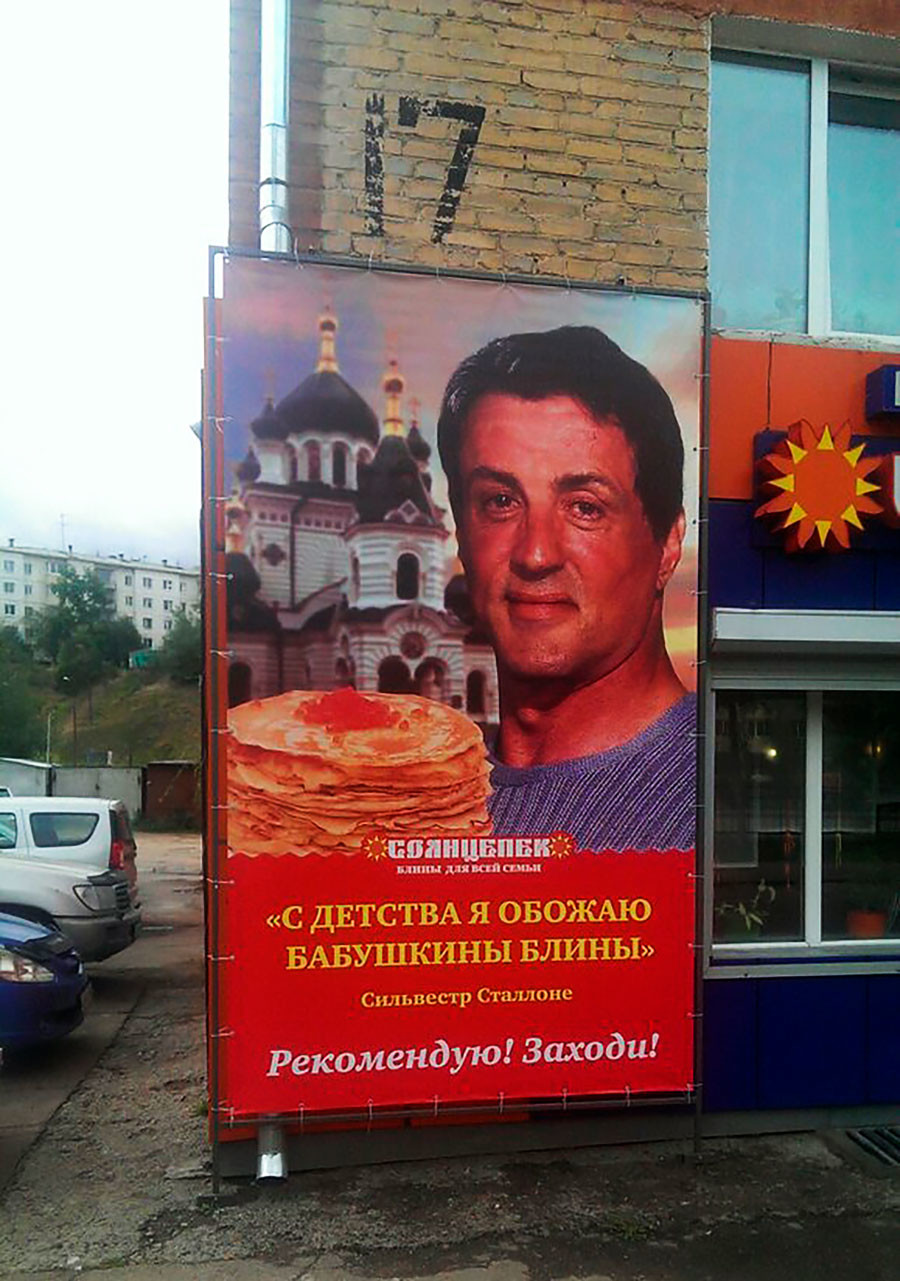 “Since childhood, I adore my grandmother’s pancakes,” the banner quotes the actor having said. At the bottom, it also says: “I recommend it! Come in!” By the way, the cafe apparently has really good reviews.

2. Jason Statham has tried himself in another Russian advertisement. For example, he “promotes” cargo transportation services. “From a loaf to a whole house” - such a “quote” from the actor can be seen on the truck of this Moscow company. 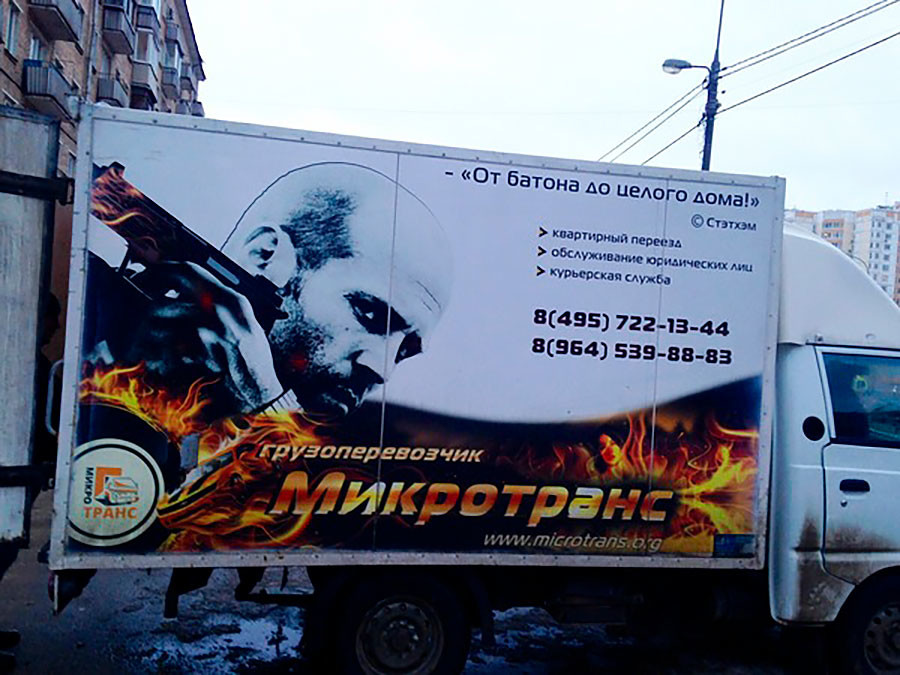 3. In the Siberian city of Tomsk, Tom Cruise also advertises cargo transportation services. The company’s name was even inspired by him - ‘Tom Gruz’ (“Gruz” means “cargo” in Russian). 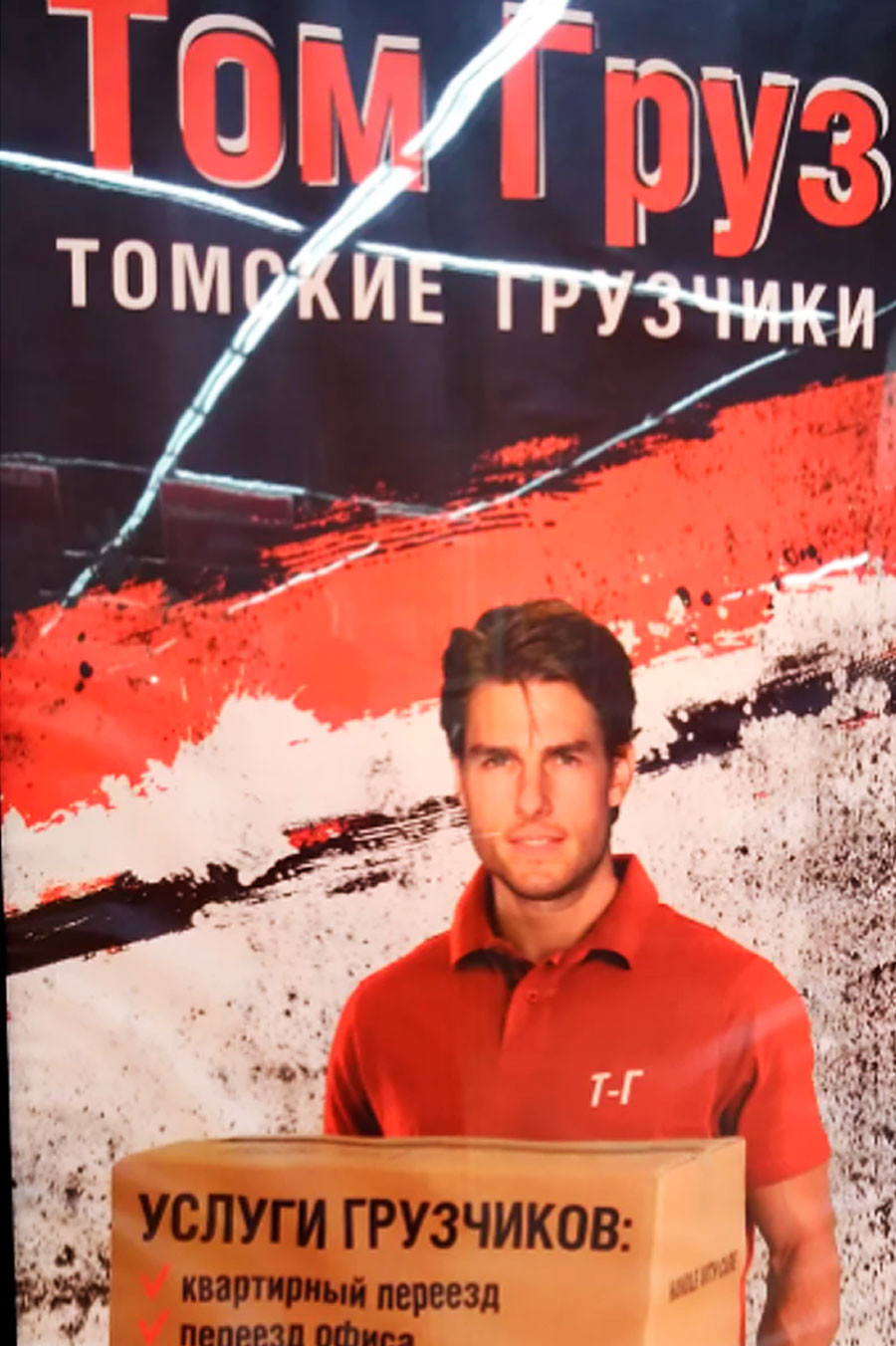 4. This photo was posted on Instagram by actress Kate Beckinsale with the caption: “So, in the spirit of U-turn week, I’ve started my own CCTV business in the Urals. It’s really just me in the back with some scotch eggs and a pickaxe but tally ho let’s go.” In the comments, her Russian fans immediately wrote that this is a success and now she definitely needs to visit Magnitogorsk. 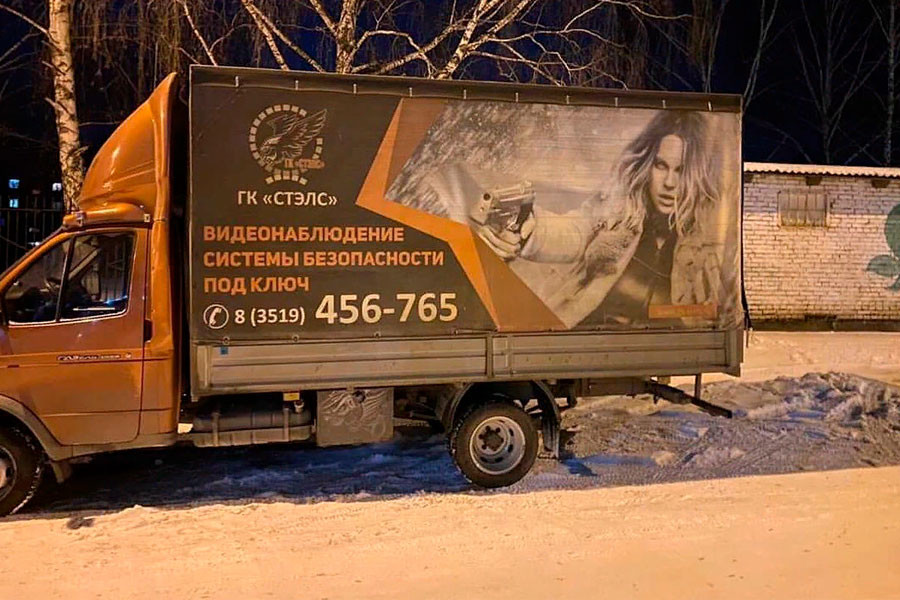 5. Shashlik kiosks on a road are very popular in Russia. Guess who often becomes the “face” of these cafes? Why, Hugh Jackman, of course, in the role of Wolverine with claw-skewers! 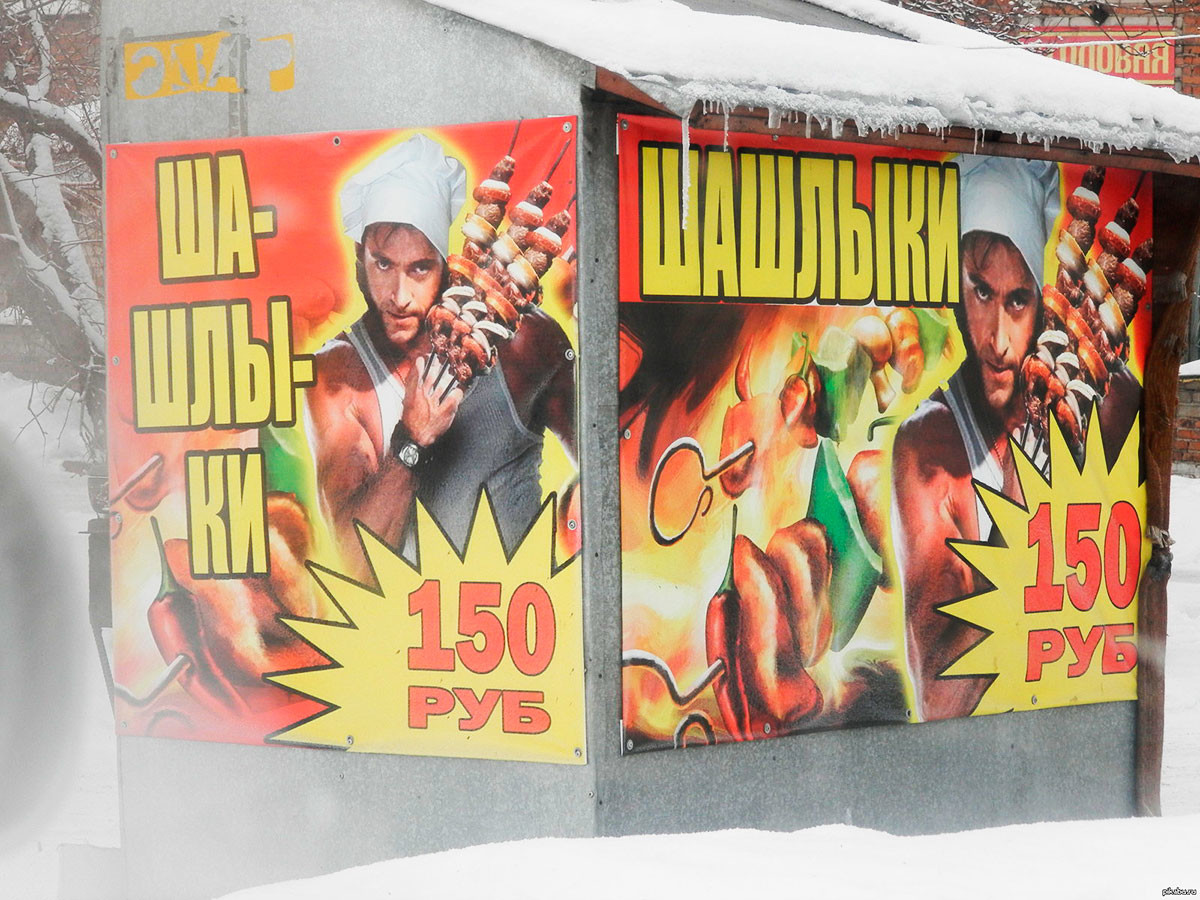 6. Brad Pitt unexpectedly became the face of a tailor store in Perm, Urals. 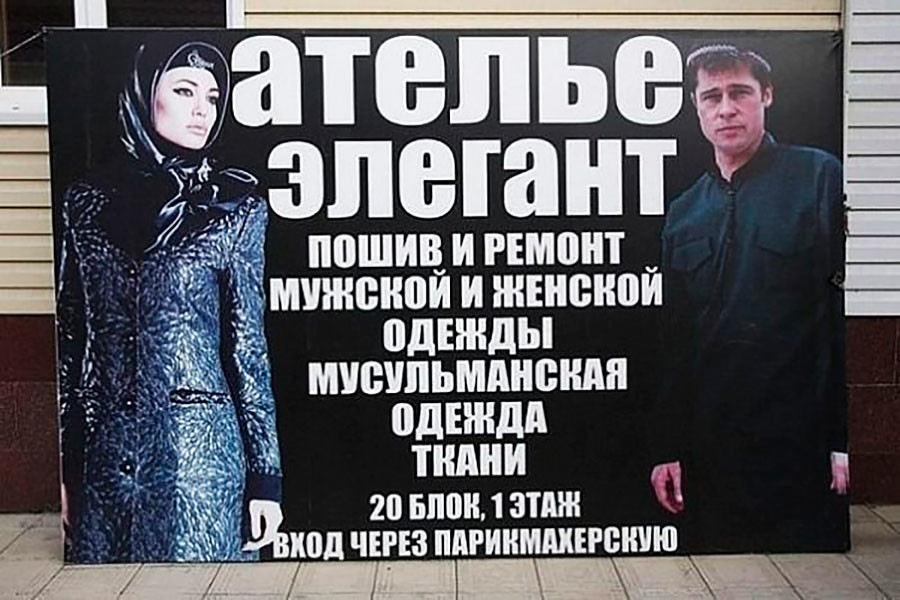 7. Robert Downey Jr. as Iron Man urges you not to pass by this fast food place in Novokuznetsk, Siberia. “Stop! The most delicious shawarma is HERE!” - reads this banner. 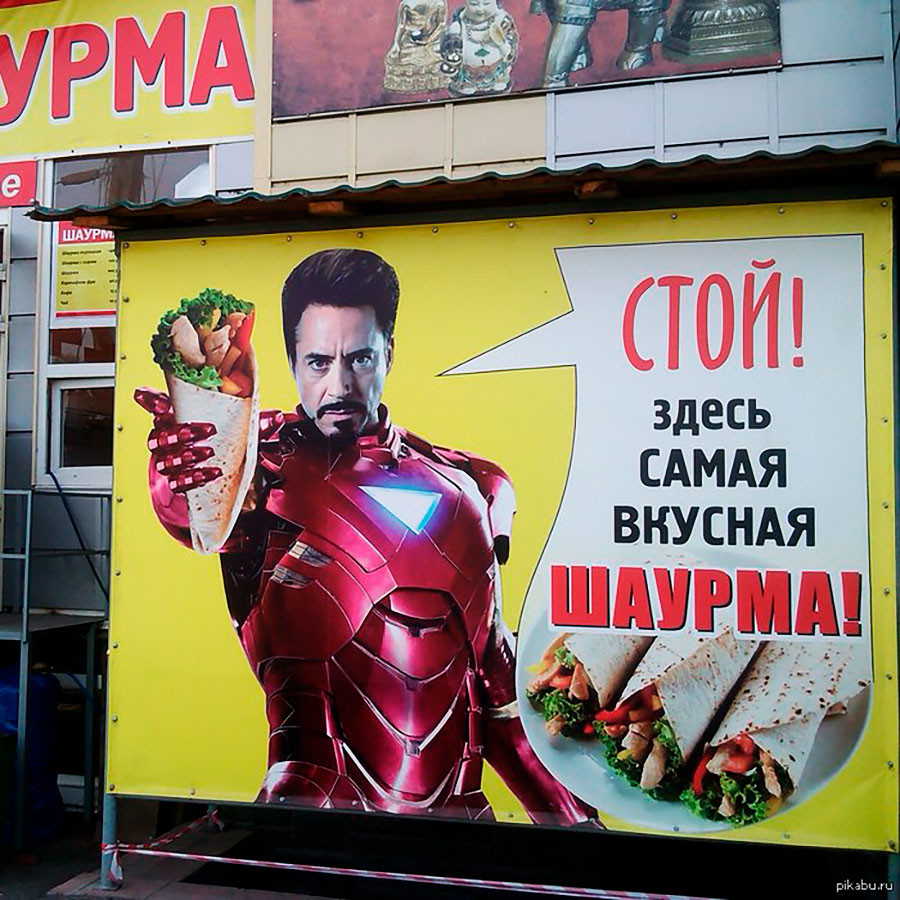 8. He also “starred” for a micro-business in Rostov-on-Don. “This grandma has the best sunflower seeds,” - “says” the actor. Impossible not to believe him! 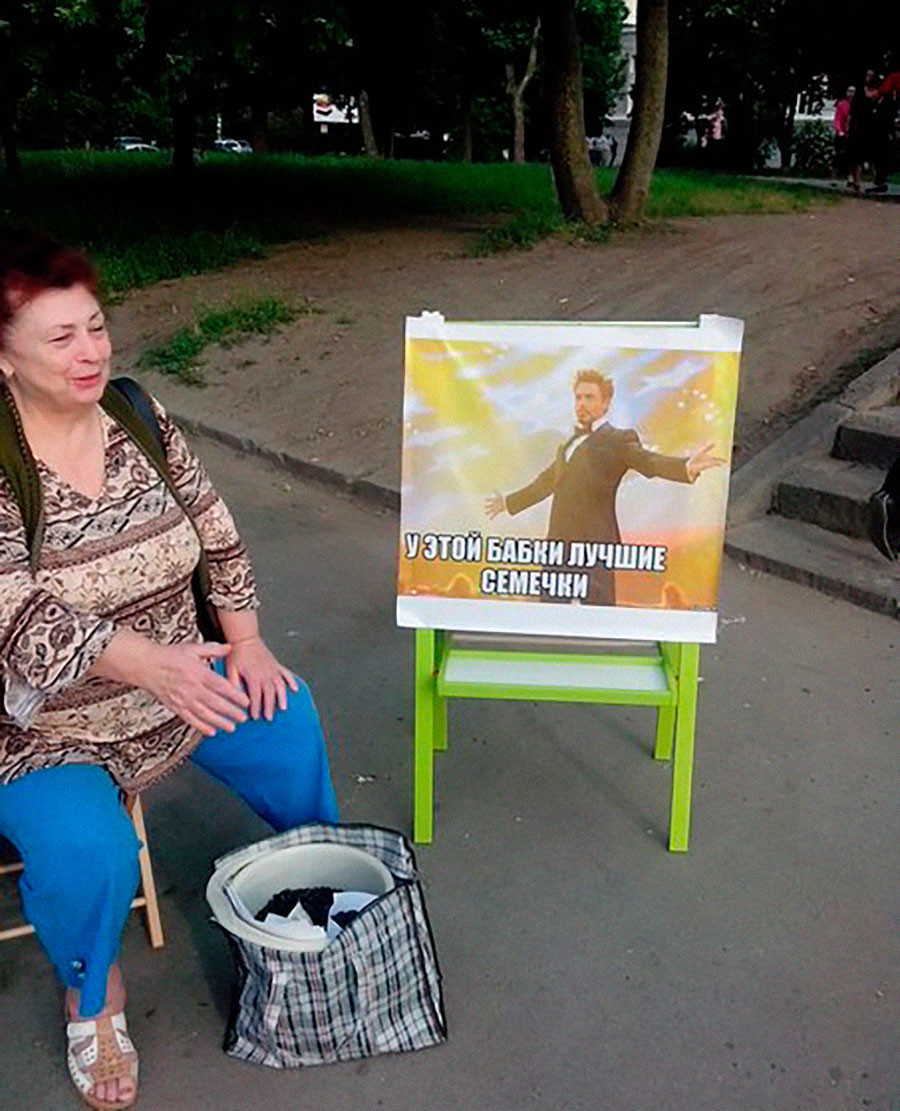 9. Kiosks that take photos for documents often depict photos of celebs as an exsample. So, here, the pension certificate photo is of Russian singer Alla Pugacheva, the Russian passport - Gerard Depardieu and the medical certificate - Hugh Laurie! 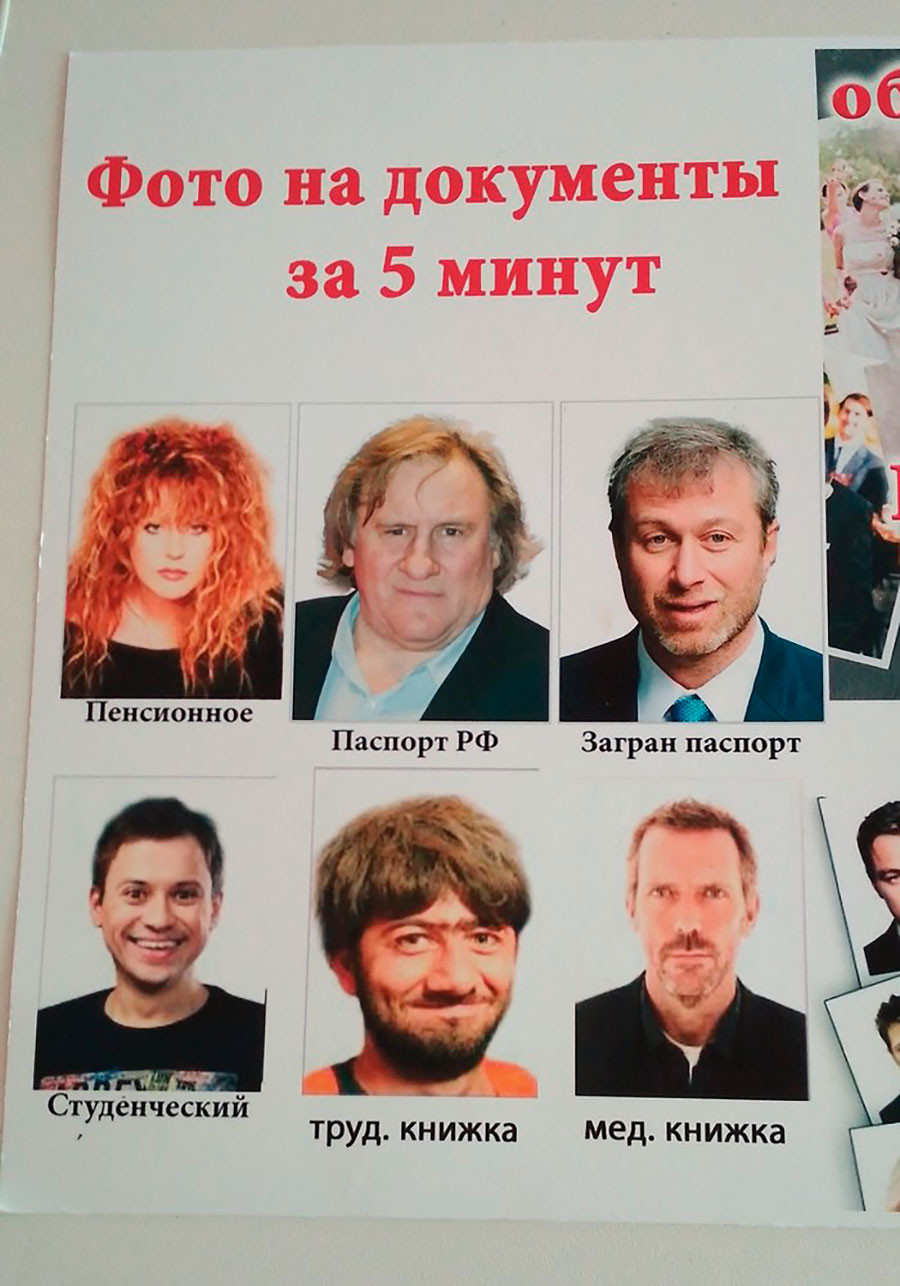 10. After a long walk through Moscow’s park of Serebryany Bor, you should definitely stop for lunch. Where to go? The choice is obvious - Canteen #33. Moreover, it is promoted by the heroes of ‘Game of Thrones’. 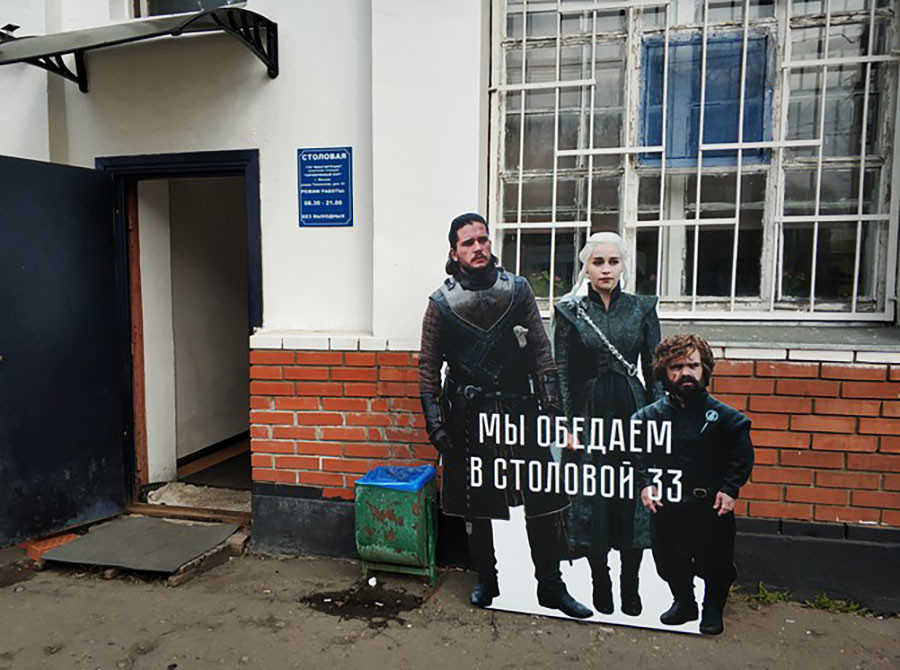 11. The fact that “winter’s coming" is also reminded by this billboard for coal boilers in Magadan. 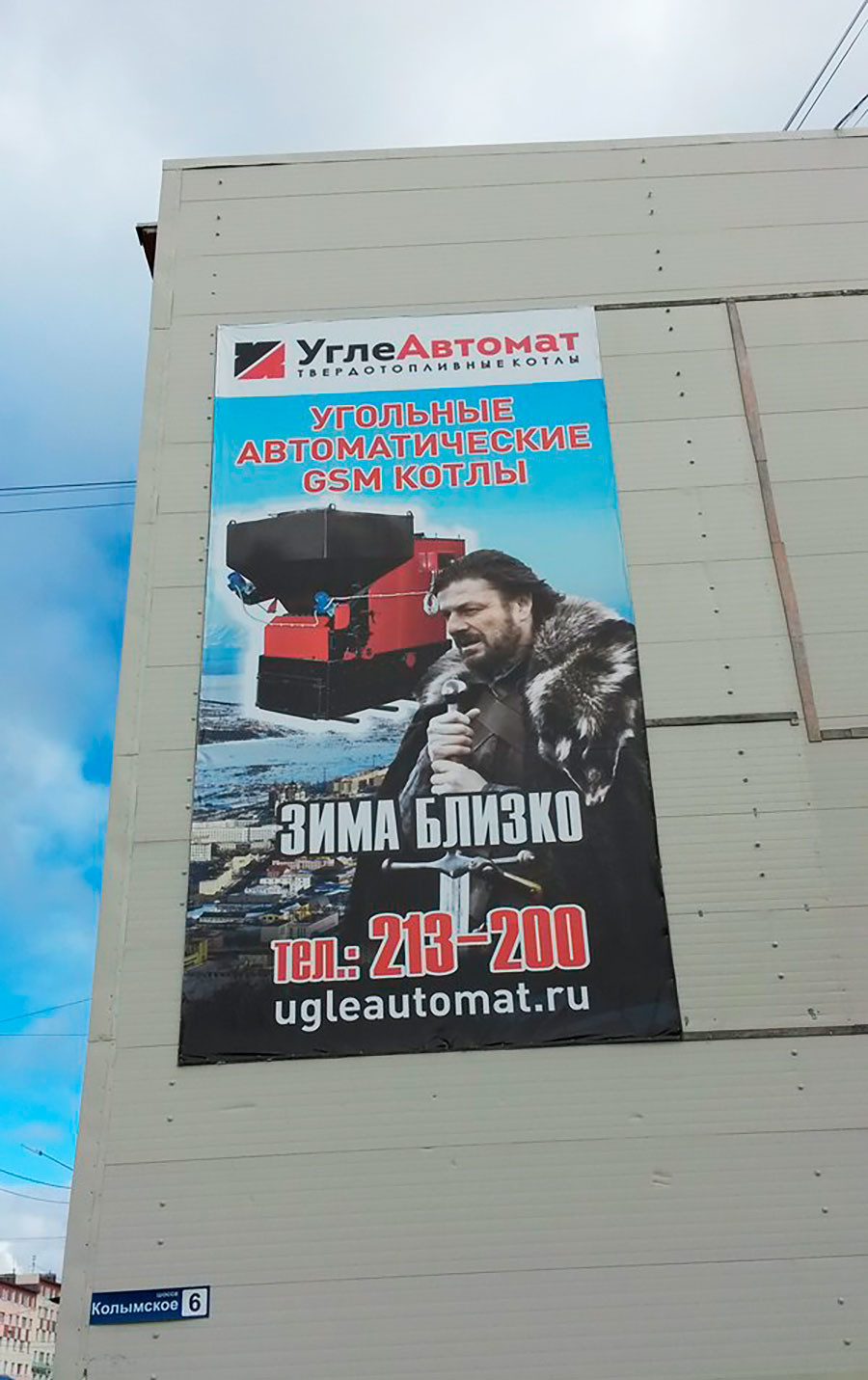 12. “The energy of your diesel in winter” reads this billboard in Ryazan. Check out Vin Diesel’s finger as he’s holding a cup of coffee. 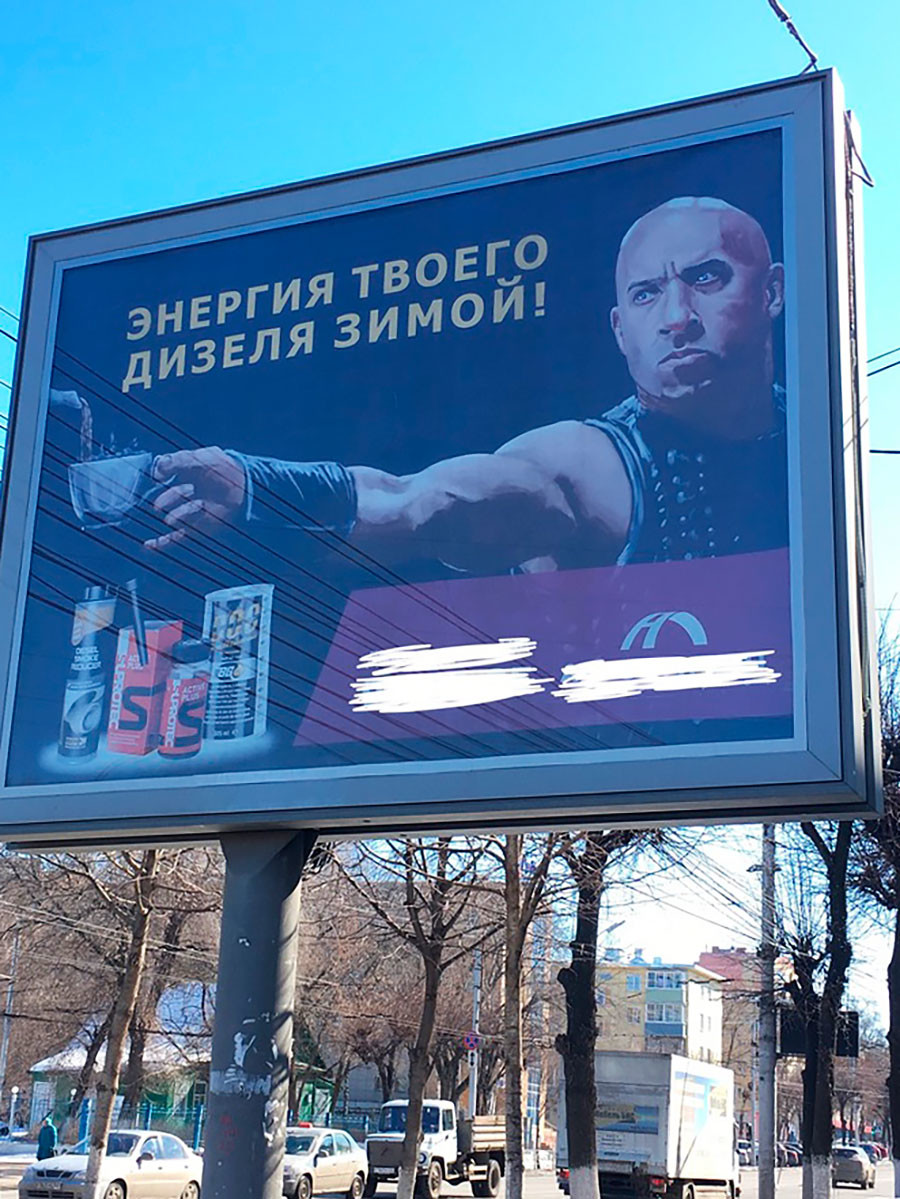 13. In Blagoveshchensk (Far East), Jackie Chan, along with Shrek and Russian singer Philip Kirkorov, promote the rental of segways in an amusement park. 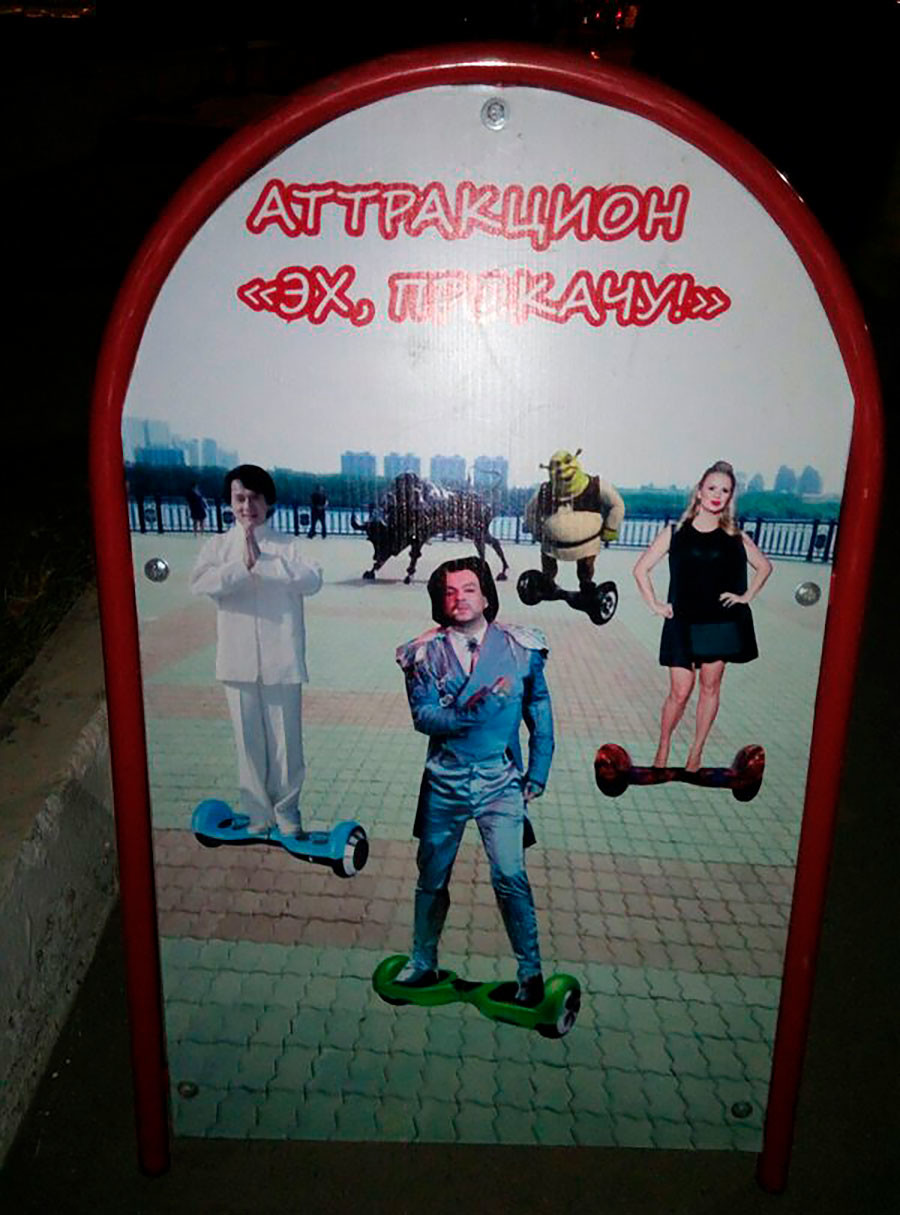 14. And how could you pass by the ‘Boss’ cologne from a Mineralnye Vody resort with Matthew McConaughey on the label? 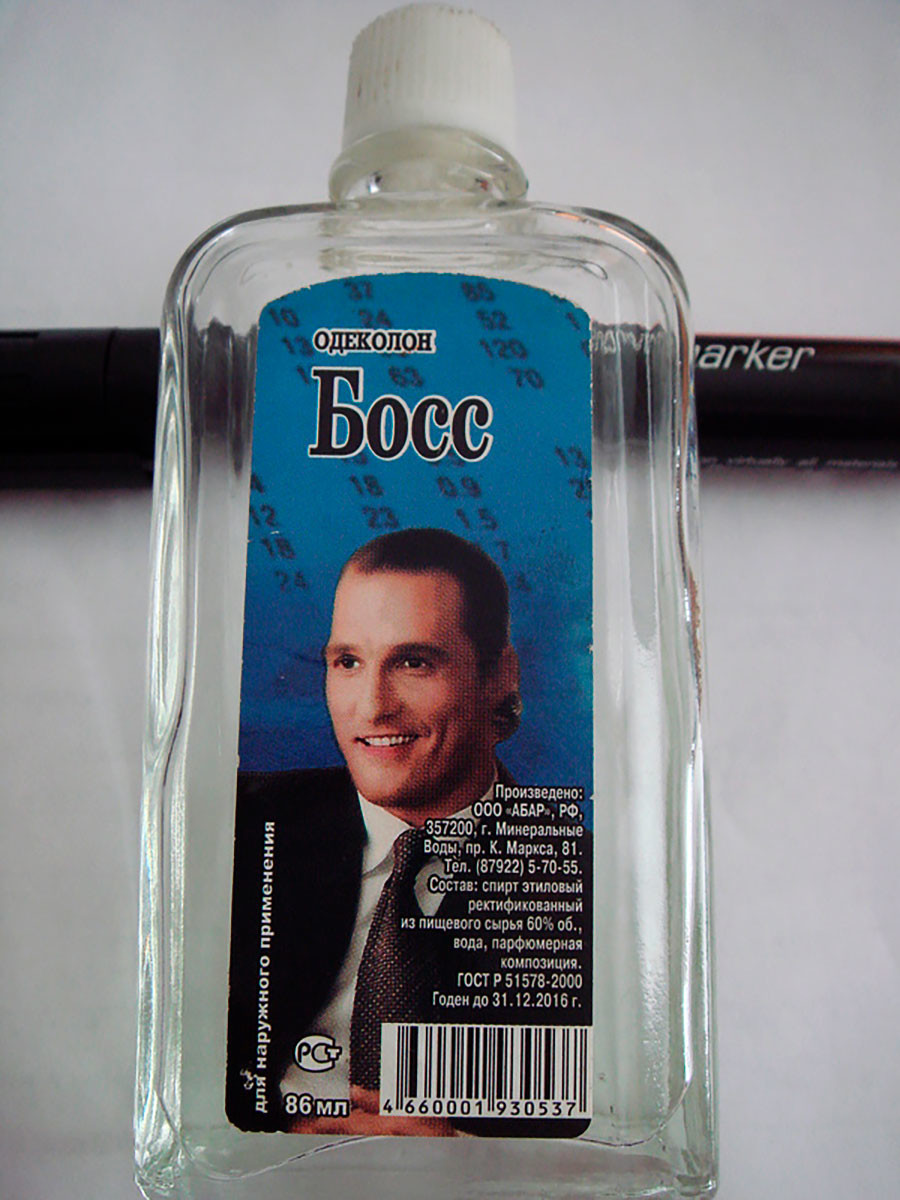