How Russian Aleuts live at the edge of the world 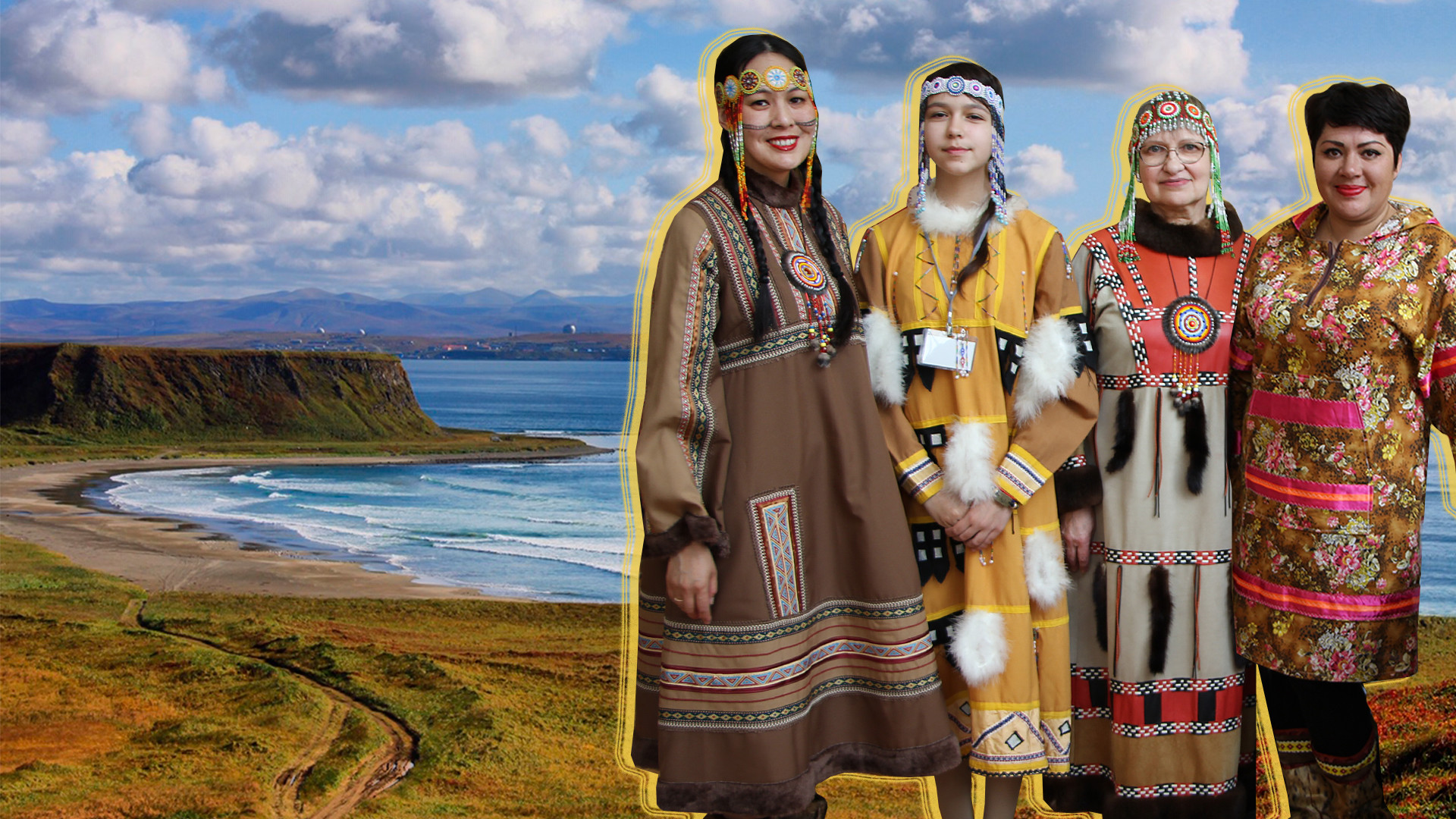 Aleutskaya Zvezda (Aleutian Star) newspaper
One of the smallest indigenous peoples in Russia, the Aleuts, live in a limited area on a remote island off the Kamchatka Peninsula and keep in touch with American Aleuts in Alaska.

The distance between the Aleutian Islands and the Commander (Komandorski) Islands is just 370 km, and this is where the border between the United States and Russia passes. In the 19th century, the Aleuts, an indigenous people of the region, found themselves divided across borders after Alaska was sold to the U.S., but the two communities still keep in touch with one another. The problems facing Aleuts on both sides of the Bering Sea are similar: Their language and traditions are gradually disappearing, as are the last remaining representatives of the Unangan culture, as the Aleuts refer to themselves. 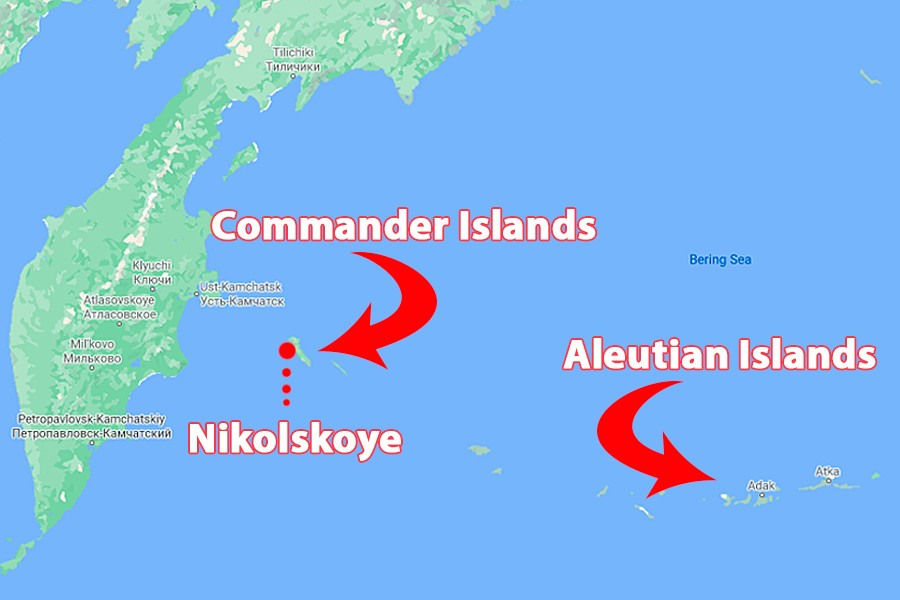 There are about 15,000 Aleuts in the world today, the overwhelming majority of whom live in Alaska. In Russia, only 300 Aleuts remain, making them one of the smallest indigenous peoples in the country. Practically all of them live in the village of Nikolskoye (whose total population is just over 600), the only settlement on Bering Island, the biggest of the Commander Islands. 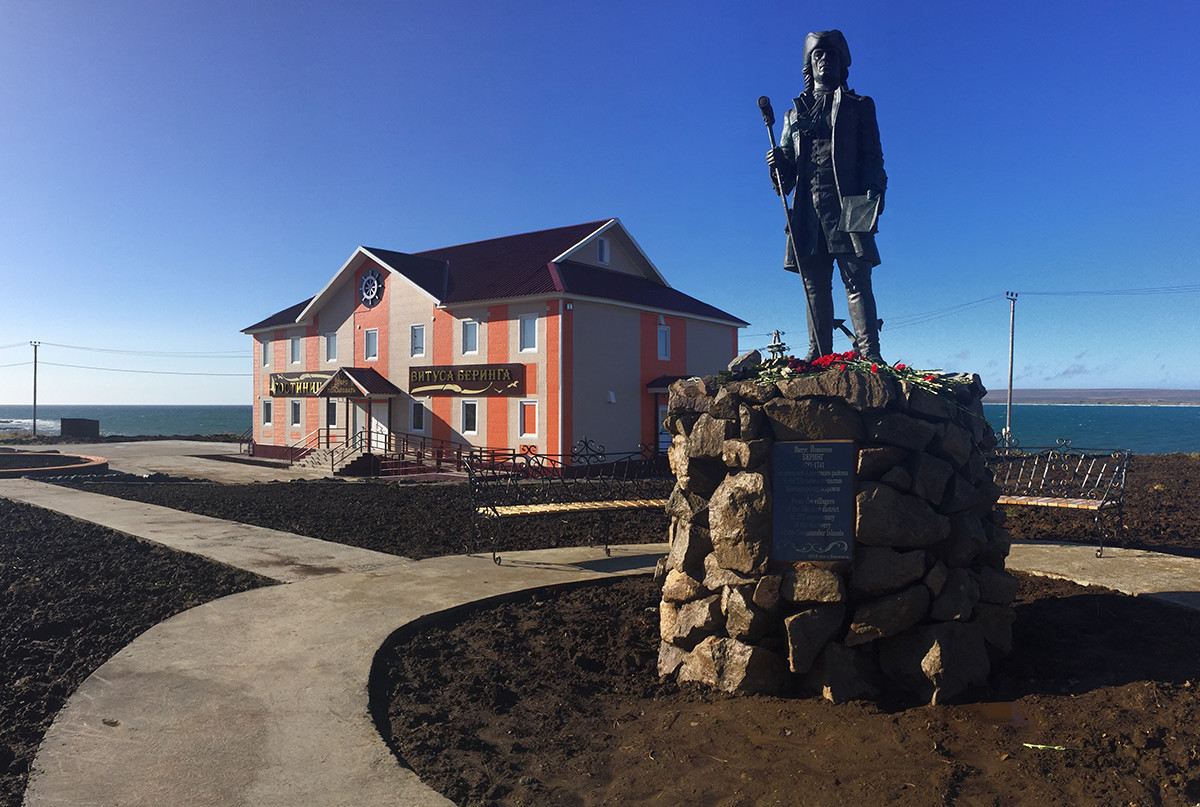 The monument to Vitus Bering and the hotel in Nikolskoye.

The Alaskan Aleuts came to the Commander Islands in 1826 when the Russian-American Company resettled them here to work in traditional hunting and fishing industries. Migrants from Atka Island found themselves on Bering Island, in the village of Nikolskoye. Meanwhile, migrants from Attu Island settled on the neighboring island of Medny (or Mednyj), in the village of Preobrazhenskoye. Since the end of the XVIII century, following a series of smallpox epidemics, the Aleut population began to decline rapidly. As a result, by the time Alaska was sold in 1867, about 2,000 Aleuts ended up in the U.S. and 500 in Russia, including 300 on Bering Island and 200 on Medny. 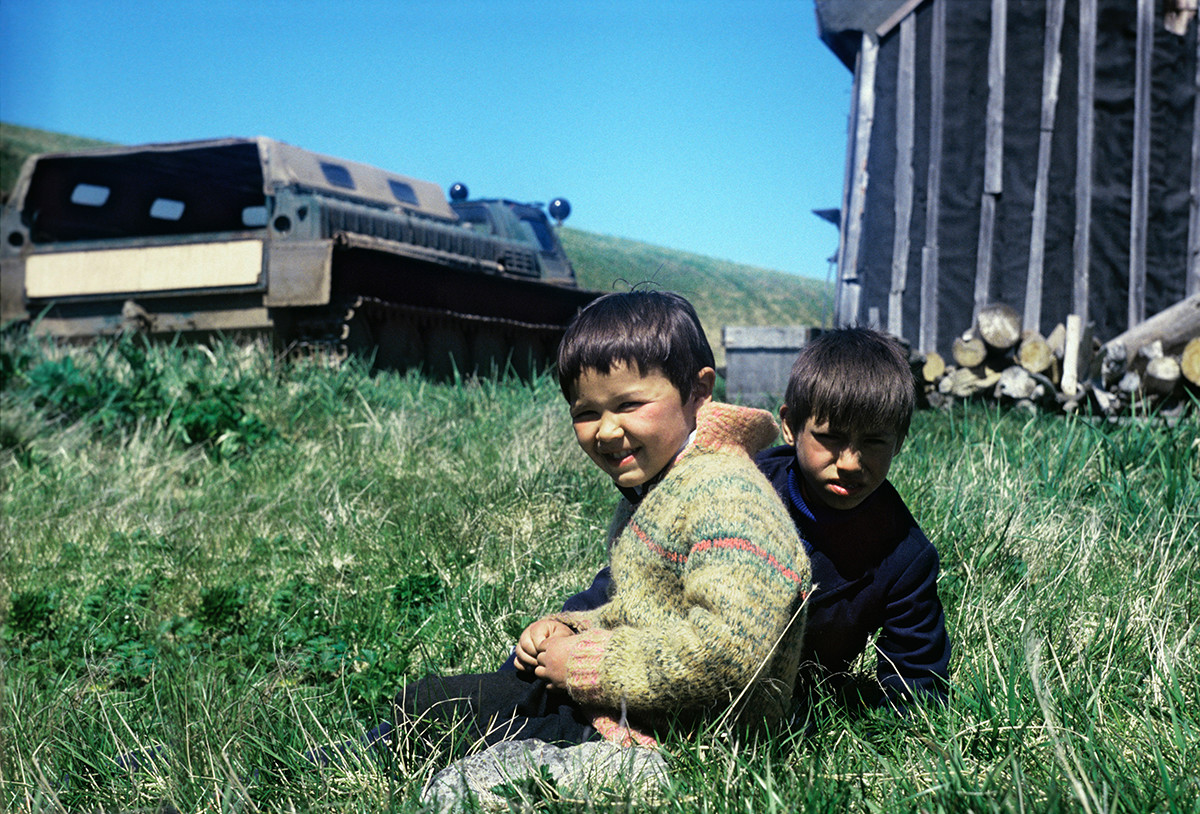 In 1970, the inhabitants of Medny were resettled on Bering Island and now Nikolskoye is the only remaining settlement in the Commander Islands. 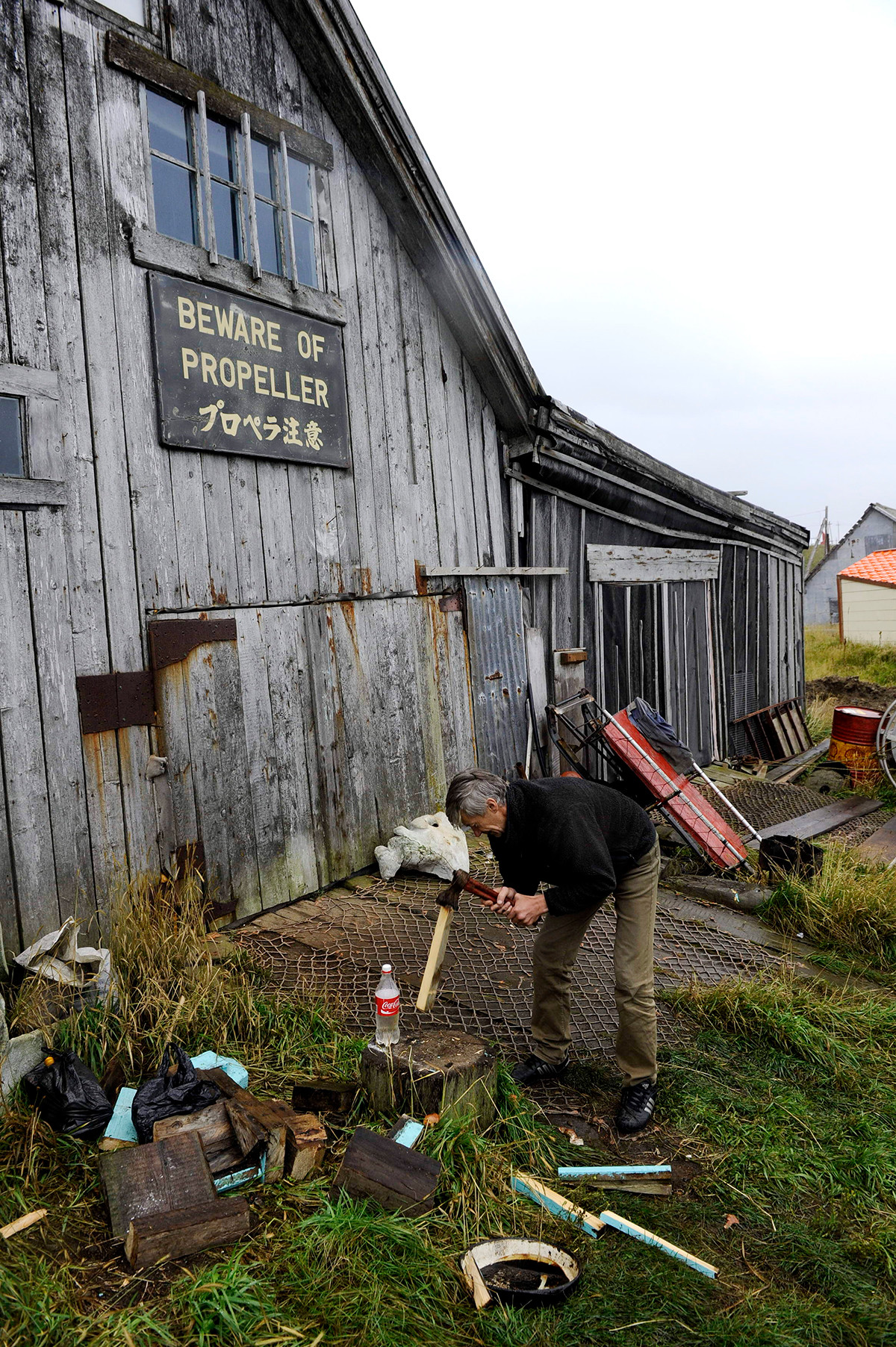 Nowadays, there is enough work available here: The village hosts a visitor center for the Komandorsky Nature Reserve, a school, a hospital and a local history museum. Aleuts most frequently make a living from the natural marine resources, but still, one wouldn't describe life on the island as easy. 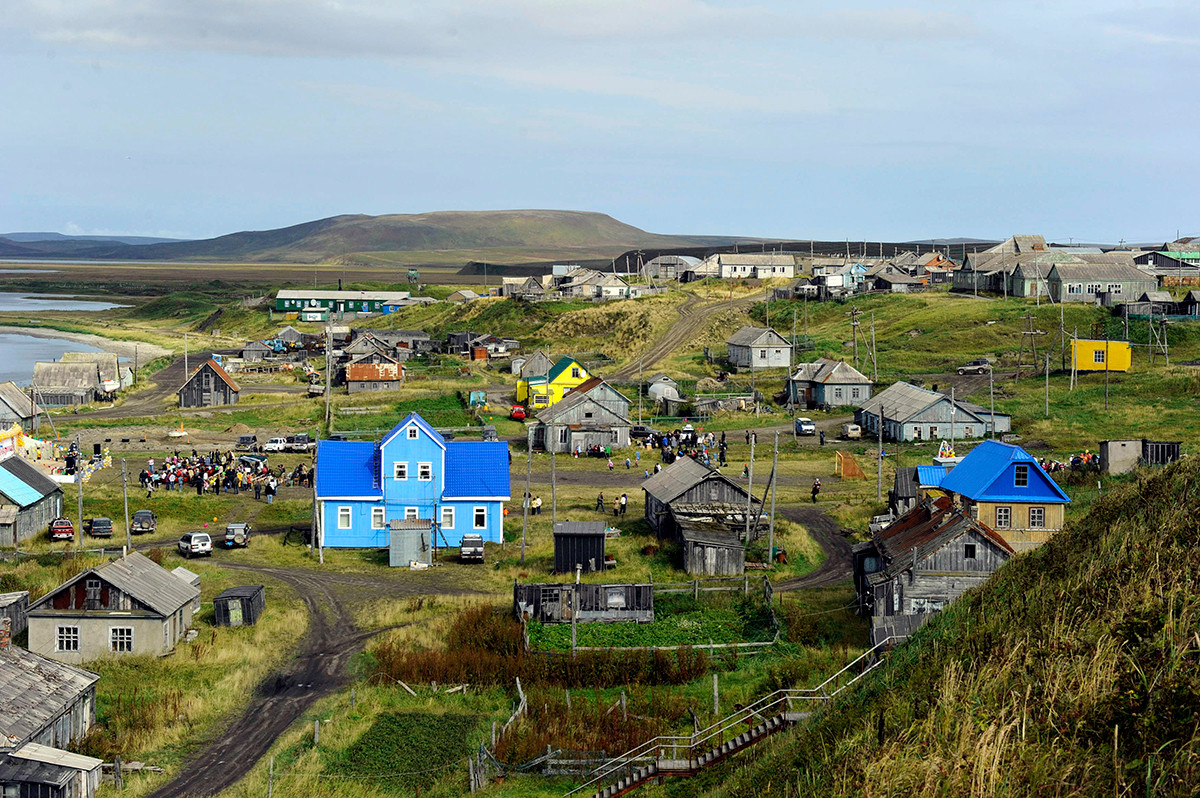 The climate is harsh and there isn't much entertainment since there are no other population centers nearby (although there are several flights a week to Petropavlovsk-Kamchatsky), so young people often leave for the "mainland." 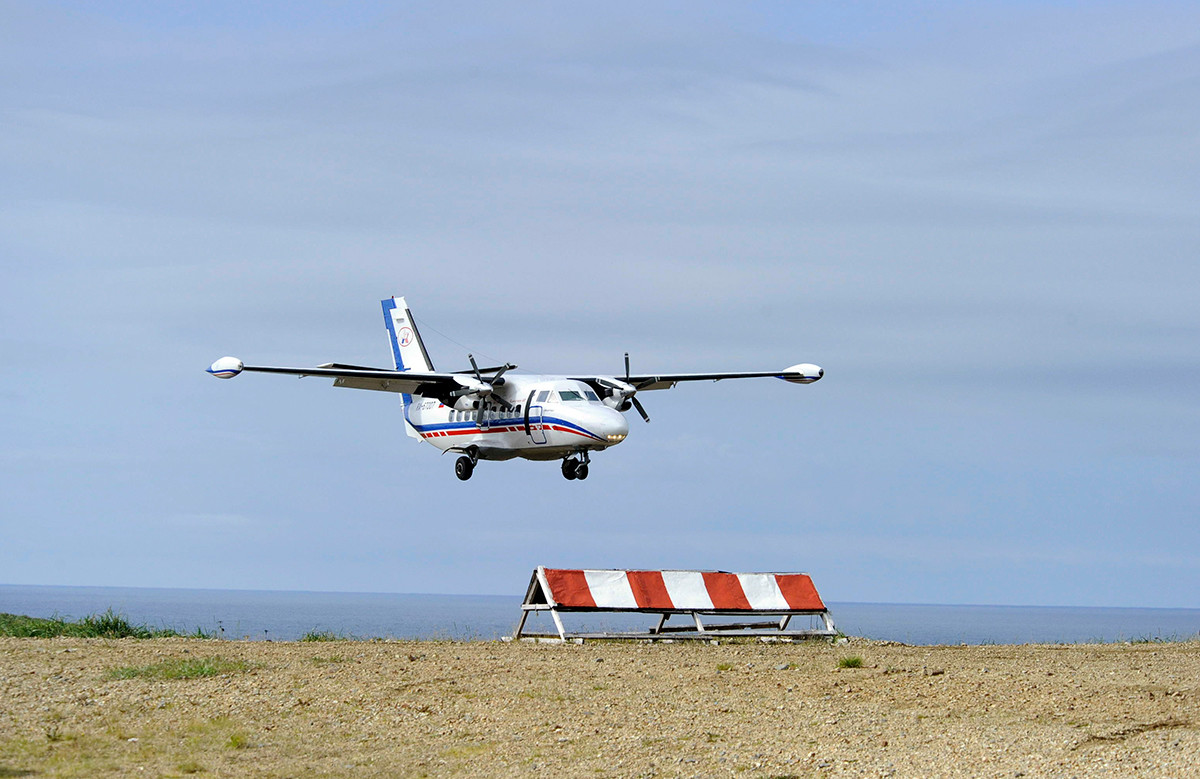 In early March 2021, the last native speaker of the local Bering dialect, Vera Timoshenko, died and there is now just one person left in Nikolskoye who freely uses the Aleut language (Mednyj Aleut language), Gennady Yakovlev. 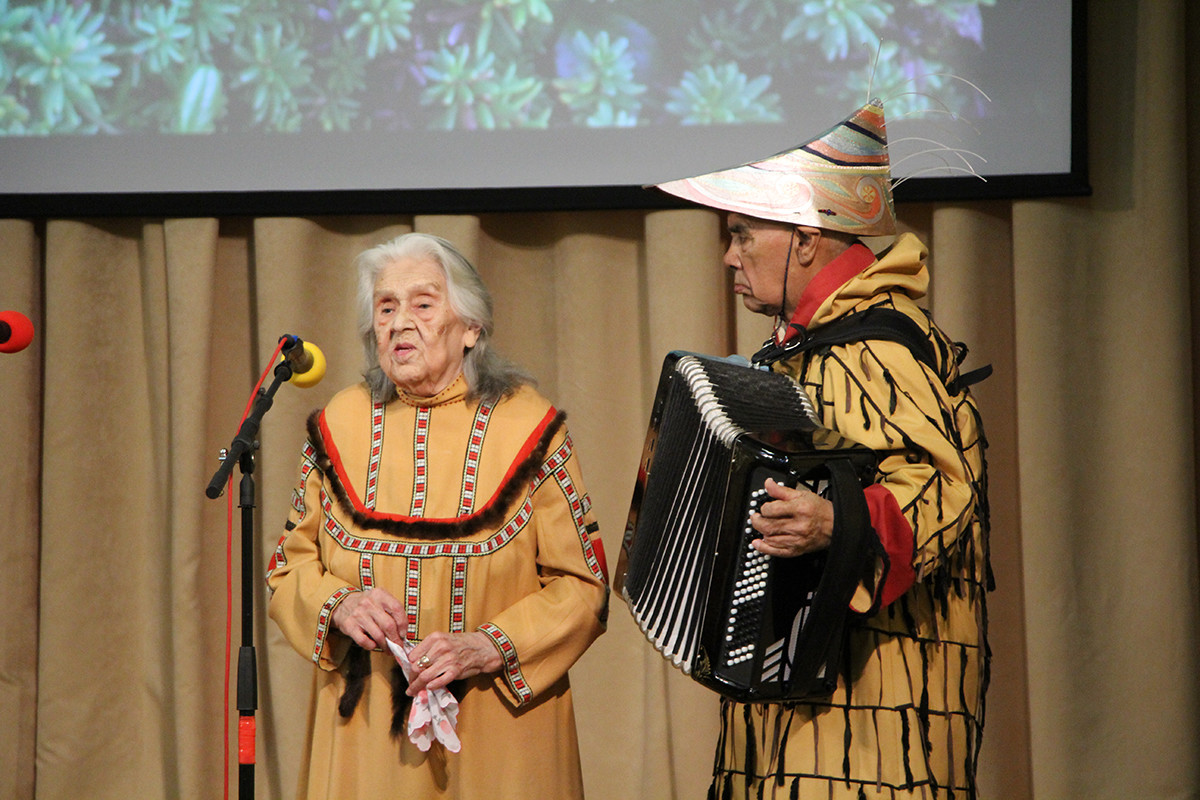 At 86 years old, he sings songs in Aleut, gives dance lessons and helps locals communicate with American Aleuts from Anchorage and Aleutian Islands. Teleconferences between the groups were held regularly before the pandemic struck. Many understand the language of their grandmothers and grandfathers, but they have spoken Russian in everyday life for a long time and Aleut is not taught in schools.

The Aleut language has two principal dialects (the western dialect, including the Bering version, and the eastern one), and Mednyj Aleut language (mixed Aleut-Russian). Additionally, the Latin alphabet is used for the written language in the U.S., while Cyrillic is used in Russia. But the reason the language is difficult to learn lies elsewhere. There is little in the way of teaching materials and few actual speakers of the language, says Elena Solovanyuk, deputy chief of the local administration. She learned the Aleut language at the Institute of the Peoples of the North in St. Petersburg under the guidance of linguist Evgeny Golovko, who has studied the languages of small indigenous peoples since Soviet times. 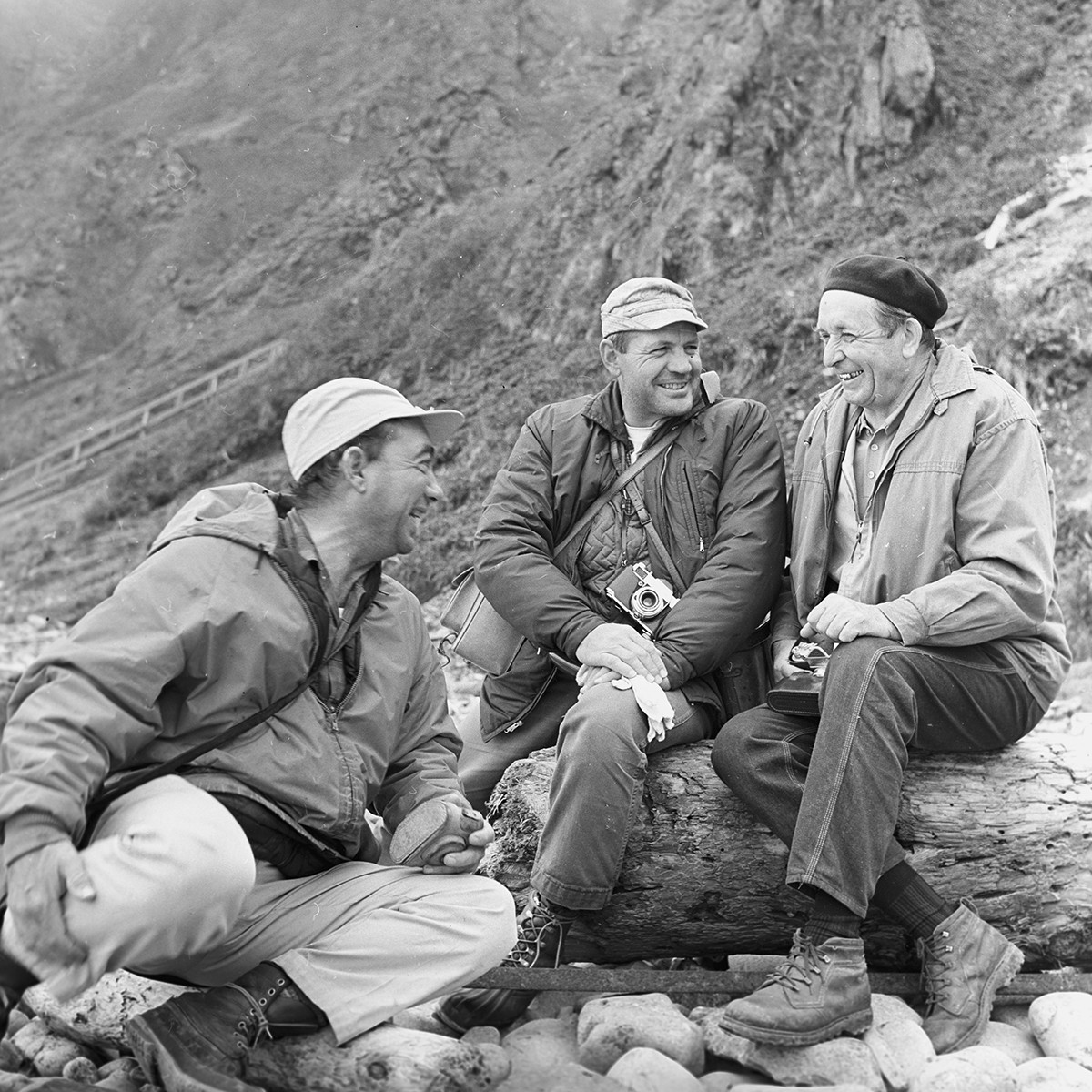 "The Commander Islands are my native land. I have a Russian father and an Aleut mother; grandfather and grandmother were Aleuts from Medny Island, and I have always been interested in the history and culture of the Aleuts," says Elena. "When I was young, I used to hear locals talking among themselves in Aleut, although if someone who did not know the language was present, they would switch to Russian." 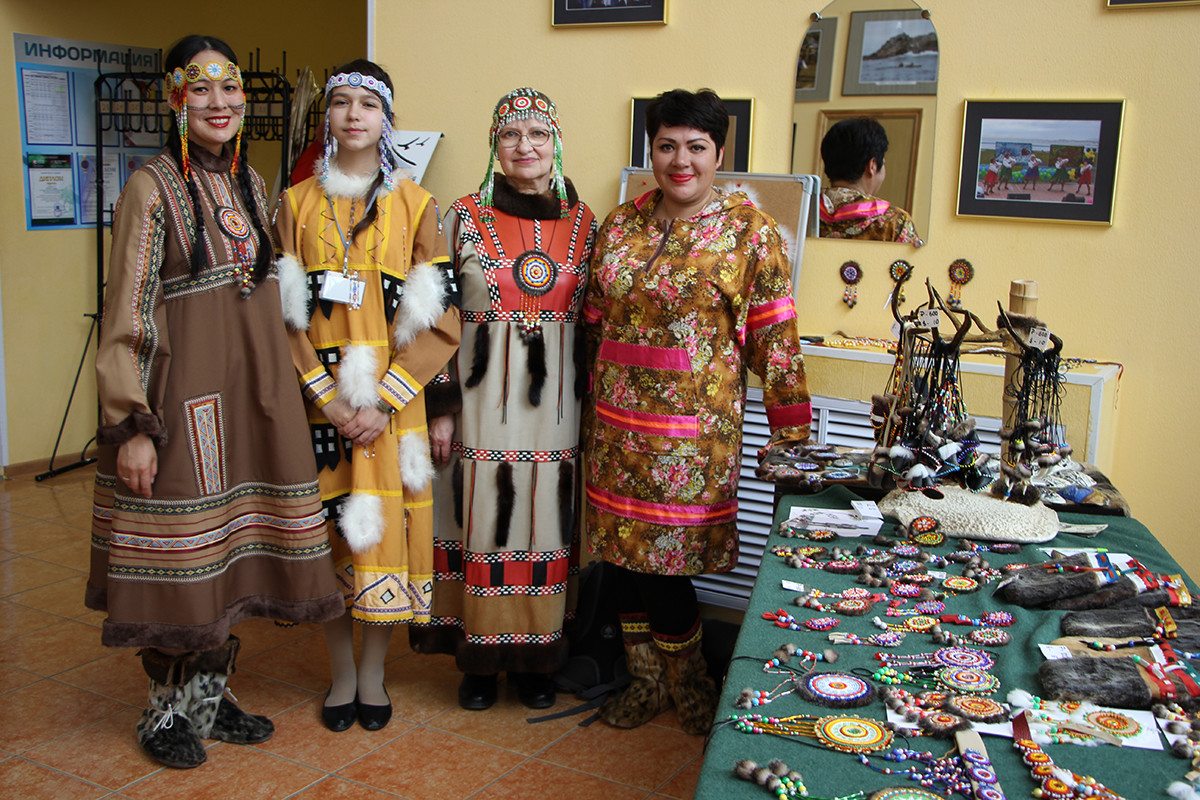 Left to right: Ksenia Kiyaikina, a dancer at the local ensemble, Diana Shumkova, a student of the Aleutian weaving class, Nina Kiyaikina, a teacher of this class, Galina Korolyeva, chairman of the Aleutsky Municipal District duma.

For several years she conducted a free language study club for adults in Nikolskoye. "We enacted little scenes in the Aleut language, wrote short stories and submitted them for regional competitions and made souvenirs with Aleut inscriptions." Aleut language aficionados also devised a board game: It was an exploration game in which players had to "make their way" from a village to a seal rookery, carrying out tasks in Aleut and moving their pieces as they progressed. Unfortunately, the lessons petered out since people were busy at work. 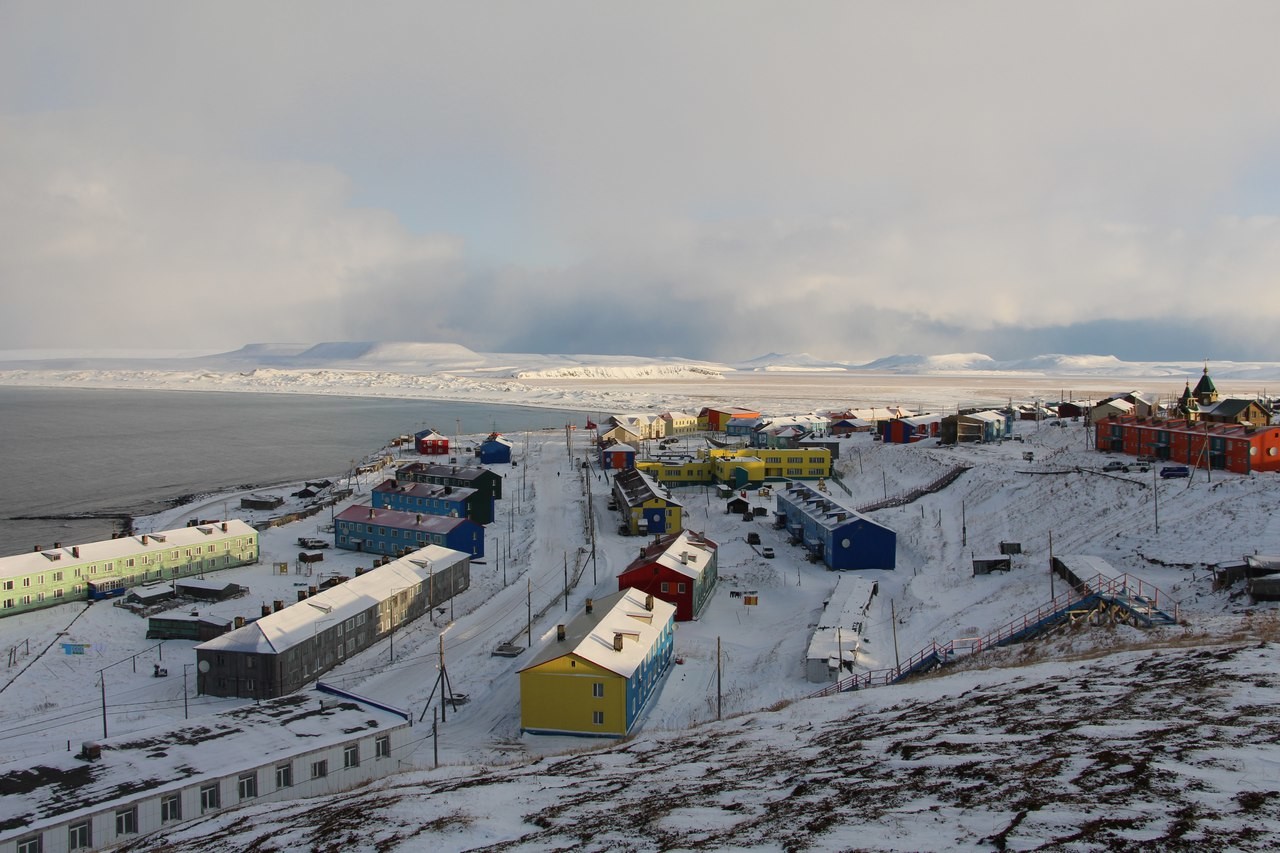 The American Aleuts also have a problem with learning their native language. Muscovite Rodion Kosorukov has been interested in rare languages all his life and once decided to learn Aleut from text books—"just for my own benefit," as he puts it. There are not any Aleut language newspapers, radio stations or films, and so to be able to communicate with contemporary speakers of the language Rodion began actively seeking out Aleuts on social media. But this turned out to be not so simple.

"Only one woman I found from the Aleutian Islands was able to reply to me," he says. "She wrote that she had understood my message, but did not know the language well enough to reply in Aleut. I also wrote to one priest, who replied that he had understood me, but could not write in Aleut, although he was able to converse with his elderly parishioners. He used English with me, while I answered in Aleut." 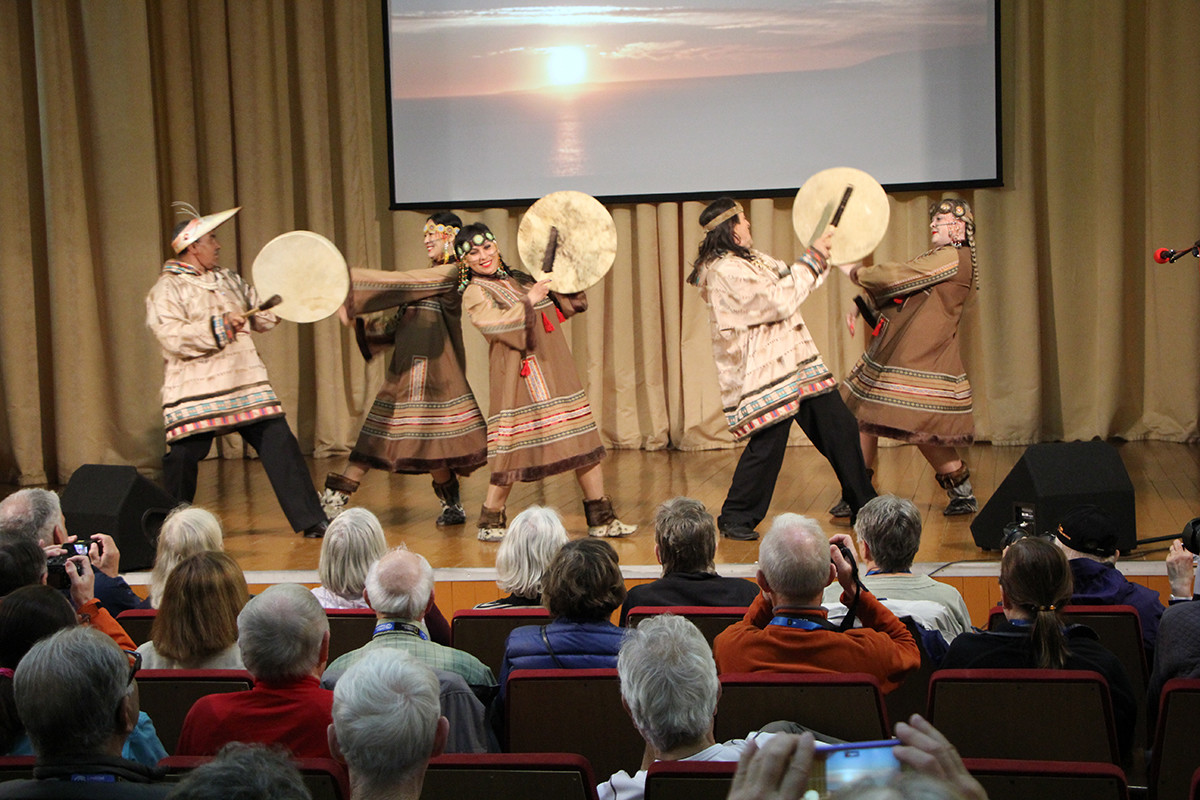 Preservation of the cultural heritage of the Aleuts is not a simple task considering that this is all literally taking place on the edge of the world. Under Elena's editorship, a Russian-Aleut language picture dictionary will soon be published and should make learning easier. This project was made possible thanks to a presidential grant won by a local public organization of the peoples of the North (ANSARKO). The grant covered the dictionary's publication costs, as well as the purchase of materials for master classes in traditional crafts and the manufacture of costumes for members of ensembles. 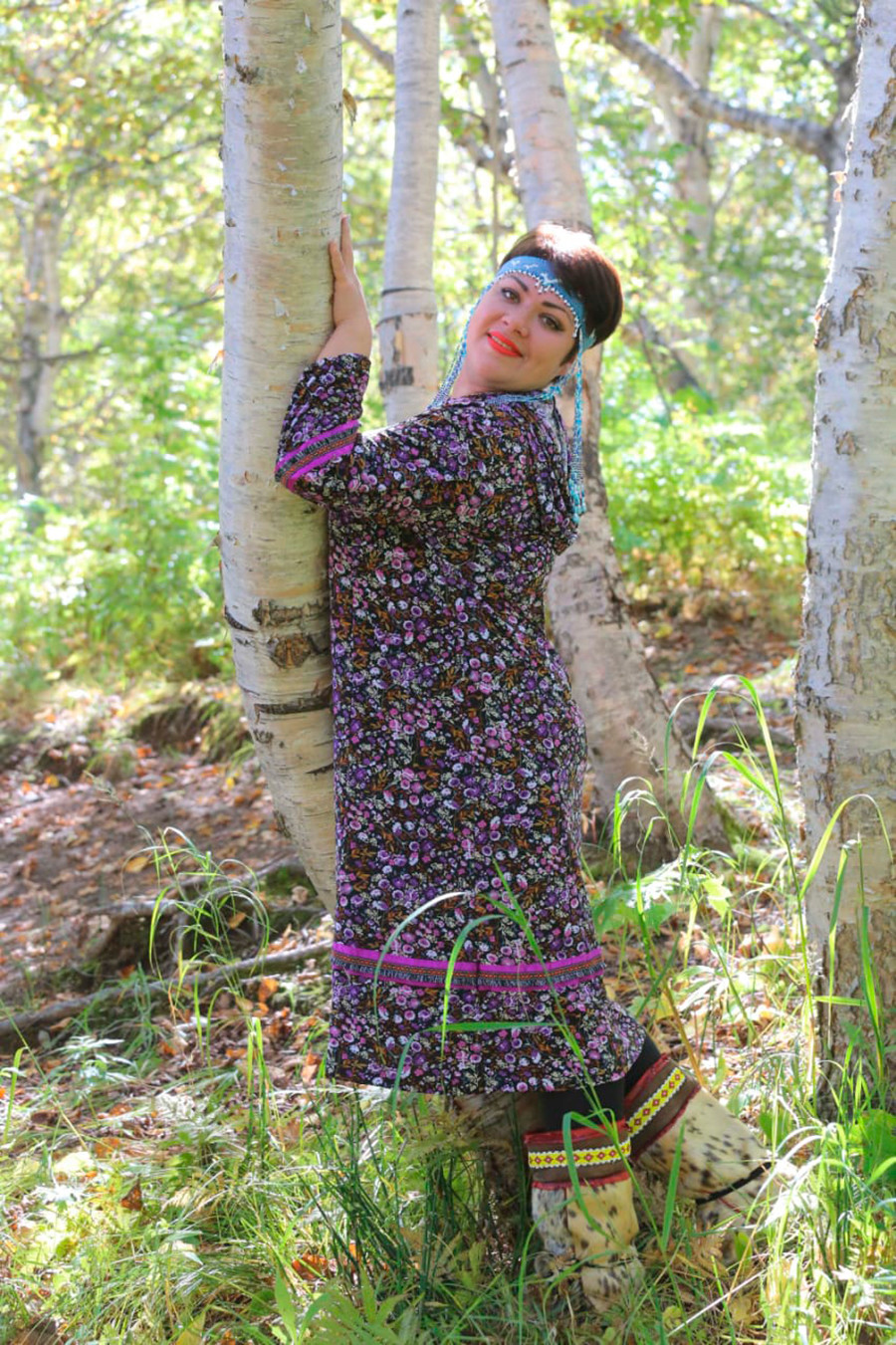 "We want our children to know at least a few words of Aleut," says Galina Korolyova, who until recently was head of ANSARKO and is now chairman of the Aleutsky Municipal District duma. She has a Russian father and an Aleut mother from Medny Island, and she can understand spoken Aleut.

Aside from her main work, Galina runs a children's folk ensemble. She also dances in an adult ensemble and plays an active part in the promotion of Aleut culture, collaborating, among other things, with the Aleut International Association in Anchorage. 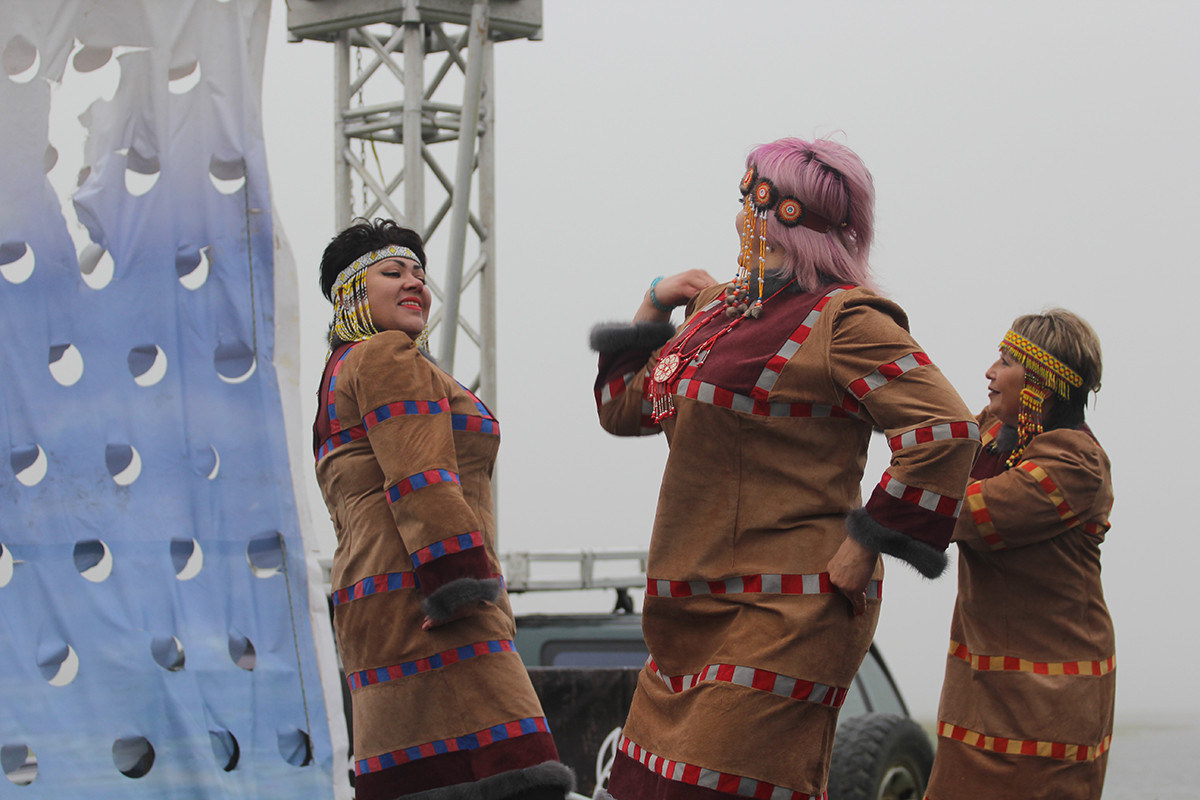