The life of German settlements on the Siberian steppes 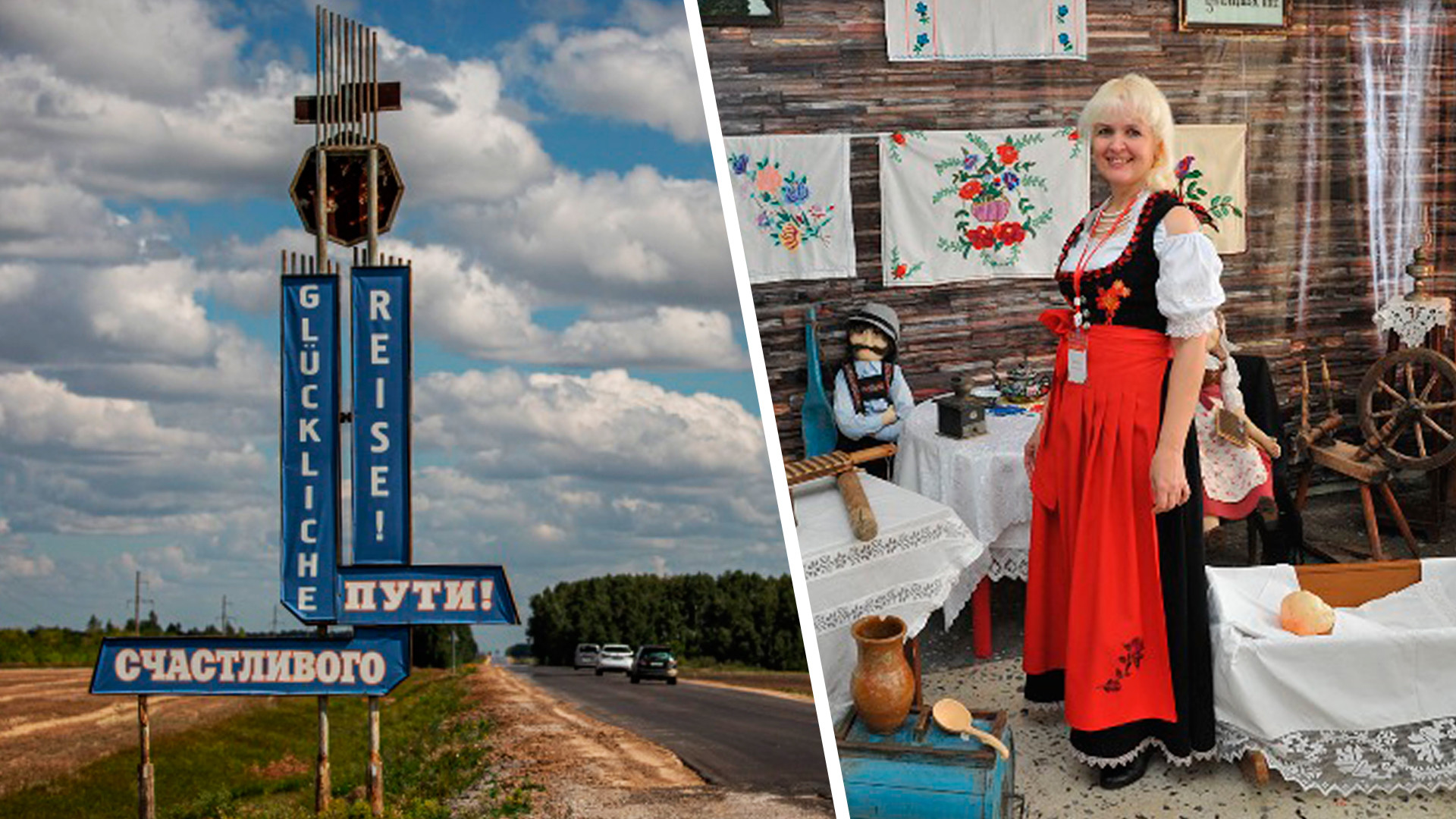 Marina Tarasova, Alexander Oshchepkov/ngs.ru
Descendants of German settlers in Russia manage to this day to retain the culture and customs of their forebears in the Altay and Omsk steppes.

Looking at ethnic Germans in Russia today, you will, among others, discover the descendants of Mennonites (a pacifist Protestant branch), who arrived in Russia in the 18th century at the invitation of Catherine II. Then there are the ‘Stolypin reform’ settlers of the early 20th century, who were promised land to use as they saw fit (more on them here). Yet another German group are the so-called “newly settled” - descendants of Russian and Soviet Germans that hailed from former Soviet republics. Then there are the forced resettlements of people during the Soviet period, when ethnic Germans were transported in cargo trains to Siberia, swiftly erasing any memory of their existence in the Crimea and Caucasus regions.

Today, people identifying as Germans number about 400,000 in Russia, most of them in Siberia and Ural Region (Altay and the Omsk Region have some 50,000 each, while the Tyumen, Chalyabinsk and Kemerovo regions and Krasnodar Krai are inhabited by about 20,000 each. There’s also a miniscule population of several thousand in the cities of the Volga Region).

These places all speak varying dialects of German and Russian, as well as marking their cultural occasions in a similarly mixed manner. And they make some amazing sausages while they’re at it! We asked the inhabitants of these areas how they manage to retain the traditions of their forefathers.

A friendship of the cultures 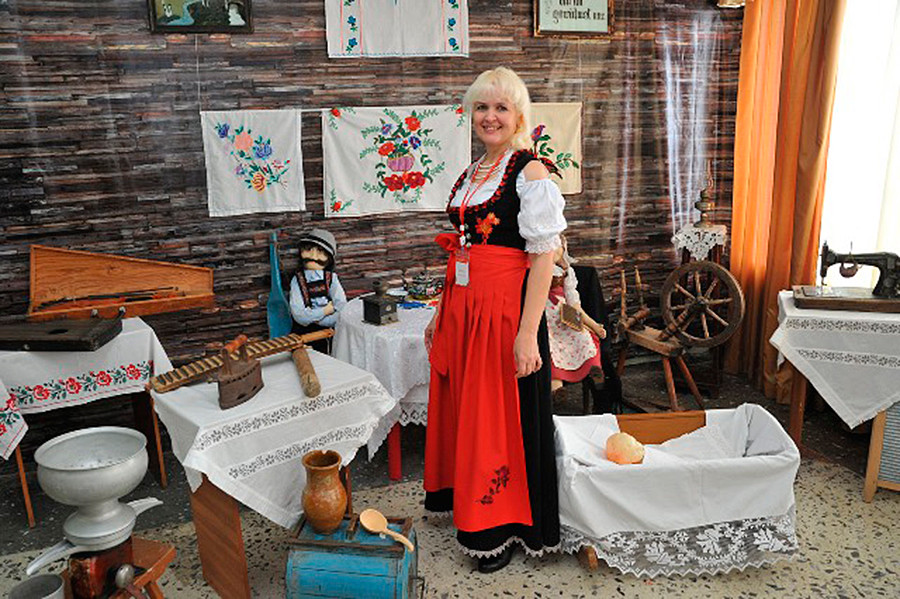 Marina at the Azovo museum.

Marina Tarasova (nee Nuss, "Nut" in German) relocated to Omsk Region from Kazakhstan after the dissolution of the USSR in 1991. She first lived in the German village of Novoskatovka (140 kilometers from Omsk). The first house was bought from a departing family, before moving to Azovo (45 kilometers from Omsk) three years ago. She now manages the area’s regional studies museum and dedicates her time to studying the culture of its German inhabitants, collecting various lifestyle antiques and photos. 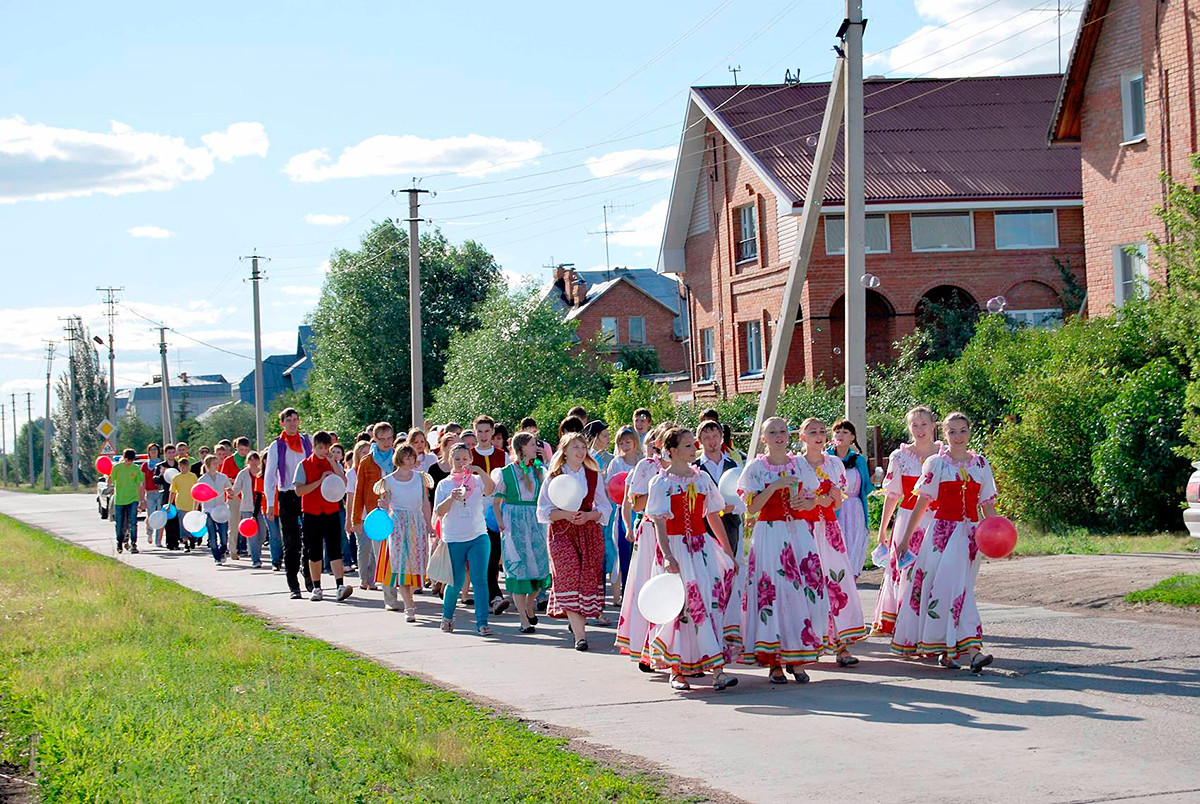 Her village of Azovo is the largest “German” village in Siberia - perhaps, in all of Russia. It was founded in 1909 with the purpose of settling Germans from the region of Malorossiya, who were promised free land. “The village of Aleksandrovka was the first to appear back in 1893, followed by Privalnoye, then Sosnovka, Novinka (boasting a number of traditional German homes); then, in 1904, a proper influx of Germans began,” Marina says. 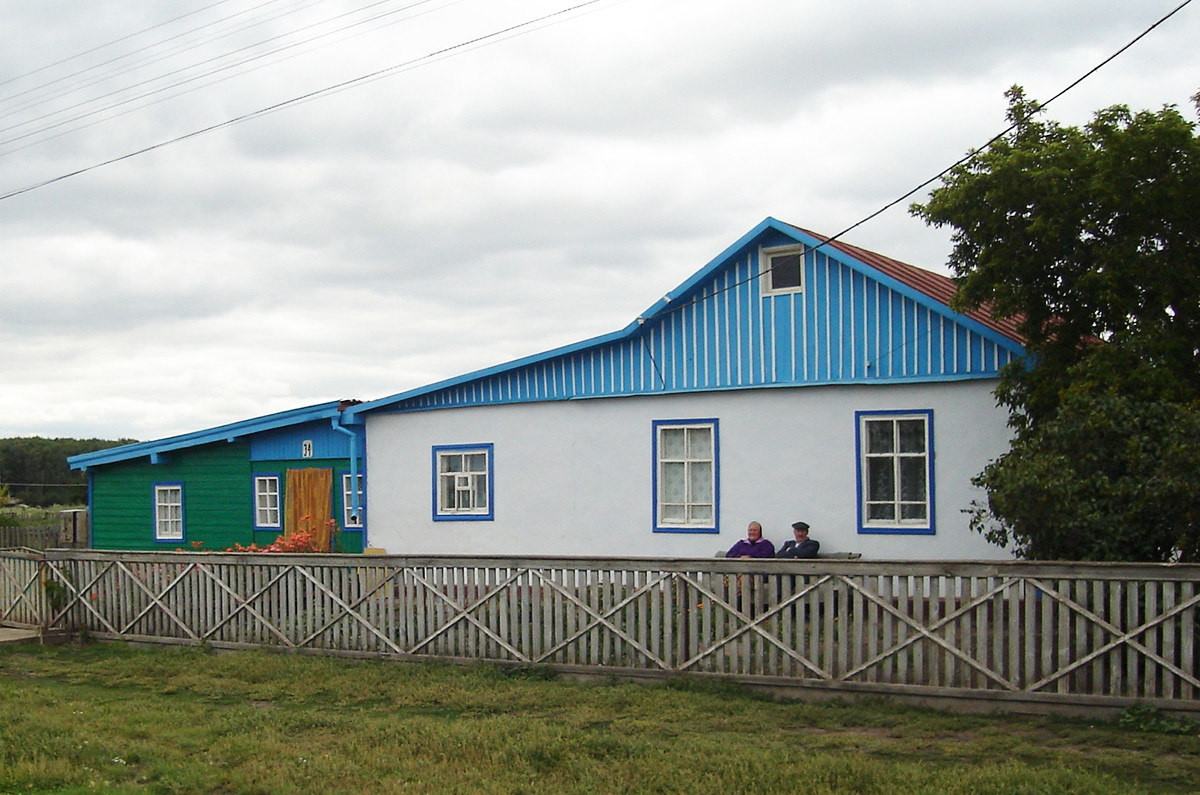 A house in the Azovo district.

Overall, the Azov area, established in 1992, has 25,000 inhabitants, belonging to dozens of nationalities - Russians, Ukrainians, Estonians, Kazakhs, Mordovians and Uzbeks, among others. Half of them, however, have German roots. “When the area was only just established, there were many ‘Russian Germans’ waiting to relocate,” Marina continues. “Germany was actively involved in assisting at the time, sending train carriages for temporary habitation. Today, the families build their own homes - often in European style.” 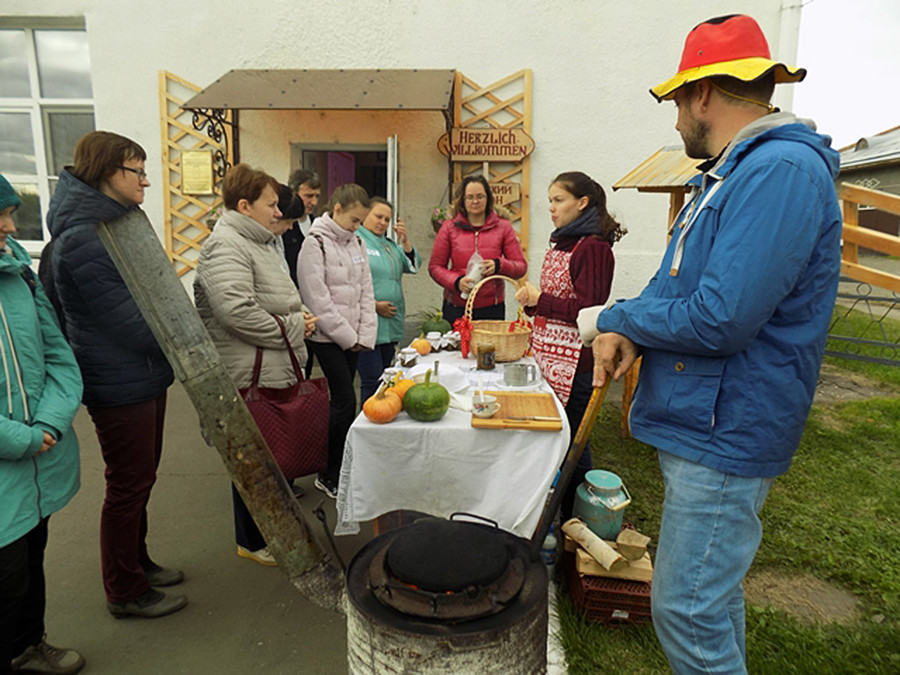 Local residents study German from kindergarten, although a shortage of teachers is being felt in light of a growing population, Marina says. Adults can also study the language in local cultural centers - they number 18 across the region, one for almost every settlement. There are also free activity clubs, which strongly resemble the Soviet era, albeit with Germans: instead of cutting out paper snowflakes, children learn to make Advent calendars for Christmas. 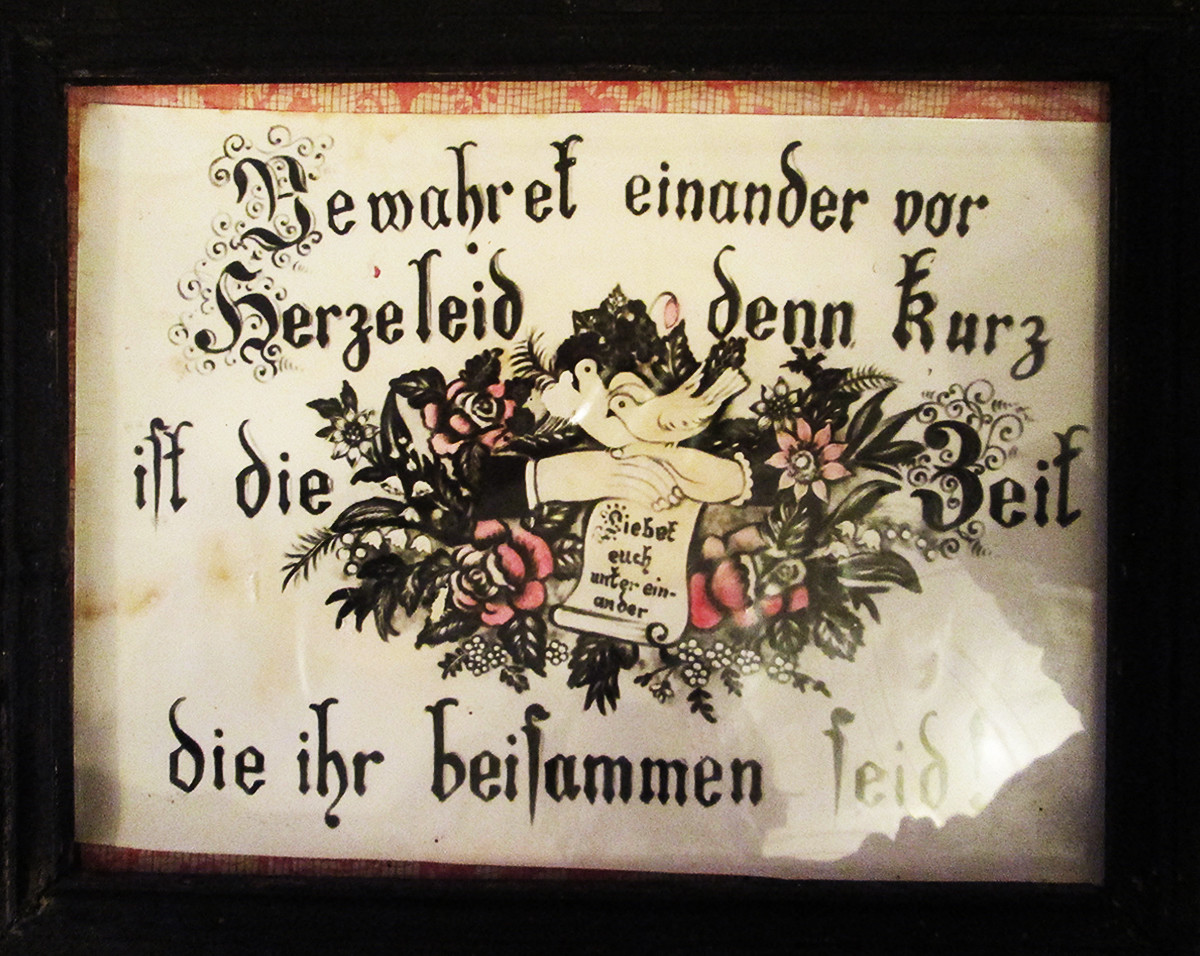 Azovo celebrates its cultural occasions with a mixture of Russian and German customs: For many families, Christmas is on December 25, for others, on January 7. Easter is celebrated according to the Catholic calendar, but the Russian ‘kulich’ bread and egg-painting are retained from the Orthodox tradition. Moreover, some families continue to observe the ancient custom of hanging hand-sewn Bible verses - or “spruchs”.

A village for difficult adolescents 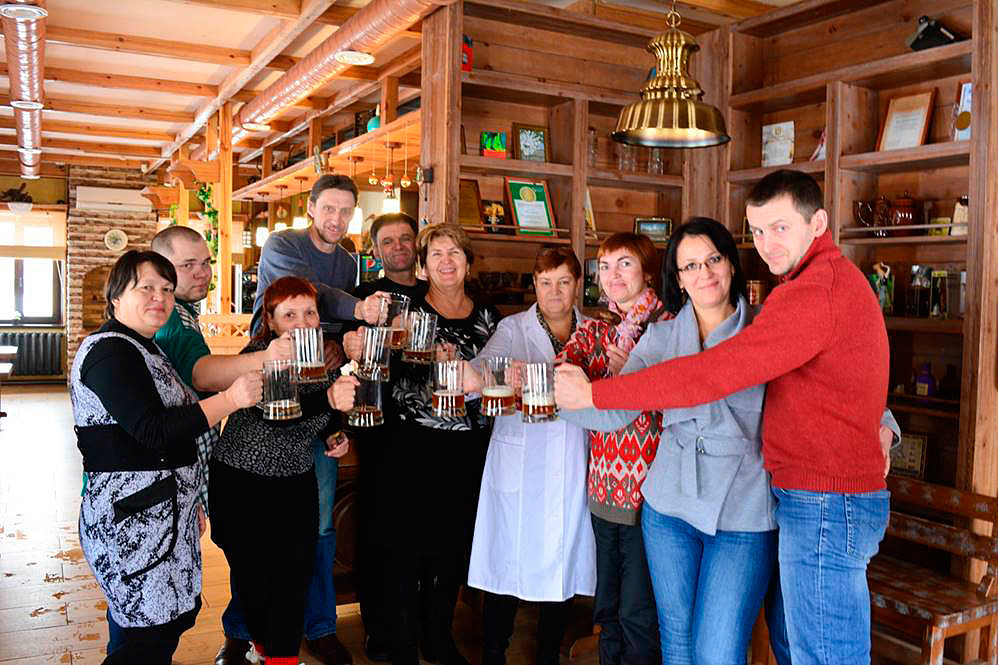 Just as it is back in Germany, the settlements have their own beerhouses, bakeries and meat-packing plants. Marina has been organizing regional gastronomical tours for some time now.

“We receive tourists not only from Germany, but from China, Canada, Belgium and Israel,” she explains. 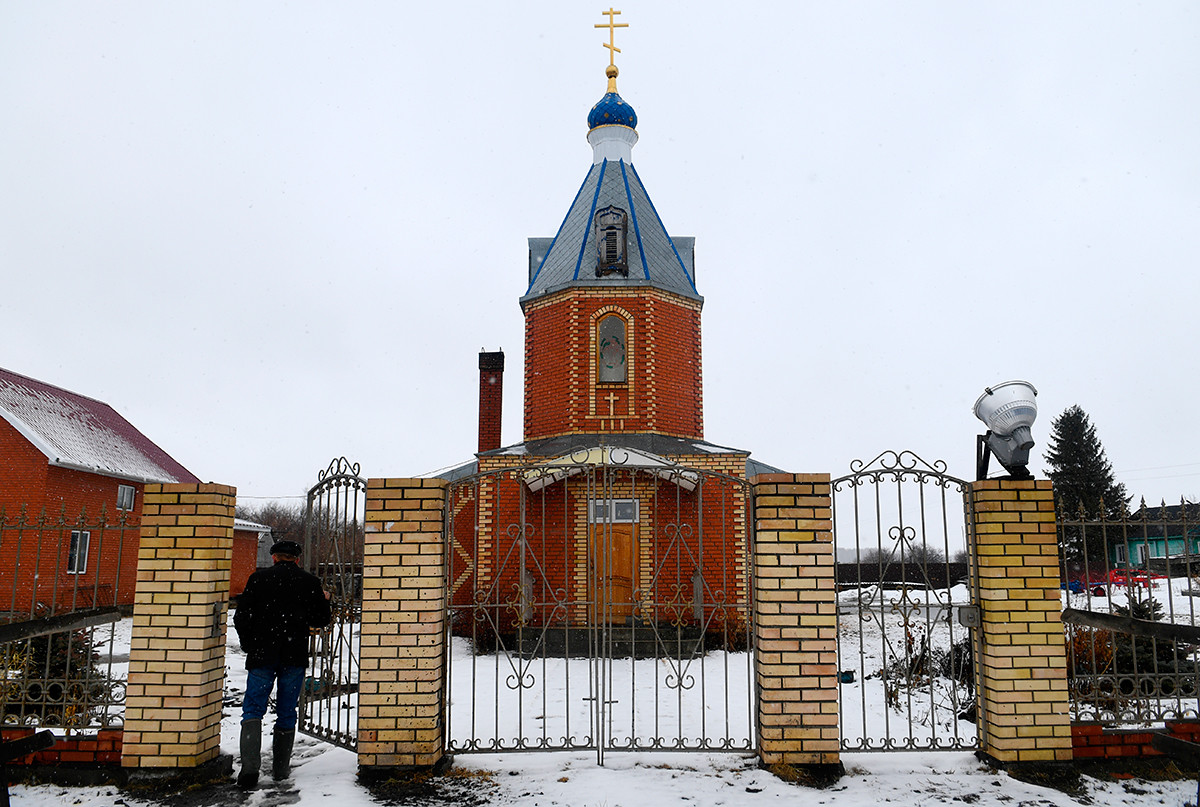 The church in Appolonovka, Omsk Region.

Furthermore, you can glimpse cathedrals belonging to a number of different faiths: most of the residents are Lutherans, but there are also Catholics, Protestants and Orthodox Christians. “In the Issikul area of Omsk Region, we also have the villages of Solntsevka and Appolonovka, where Mennonites live - and they’re very different from ours. For example, they observe the custom of gathering together the entire village’s residents to construct a house to celebrate the end of the school year,” Marina says.

As is the case with other Russian Germans, she has the legal right to be reunited with her relatives in Germany. But relocating there is not something she wants to do. “I always visit them with pleasure, but I want to work here. I’m a sociable person, I always yearn for an active role in social work, and that’s something I would miss if I were to move there.”

Germans from Germany are frequent visitors to Siberia: aside from family visits, there are cultural exchange events, as well as a program for the re-education of problem teens. For many of them, the programs are the only chance to avoid prison. So they agree to come to Siberia of their own volition, to a life without the traditional amenities we’ve all grown used to, such as central heating, a warm bathroom and so on. According to German media, at the end of every program cycle, up to 80 percent of these teens become rehabilitated and never return to their anti-social ways.

A ‘half-city’ on the steppes 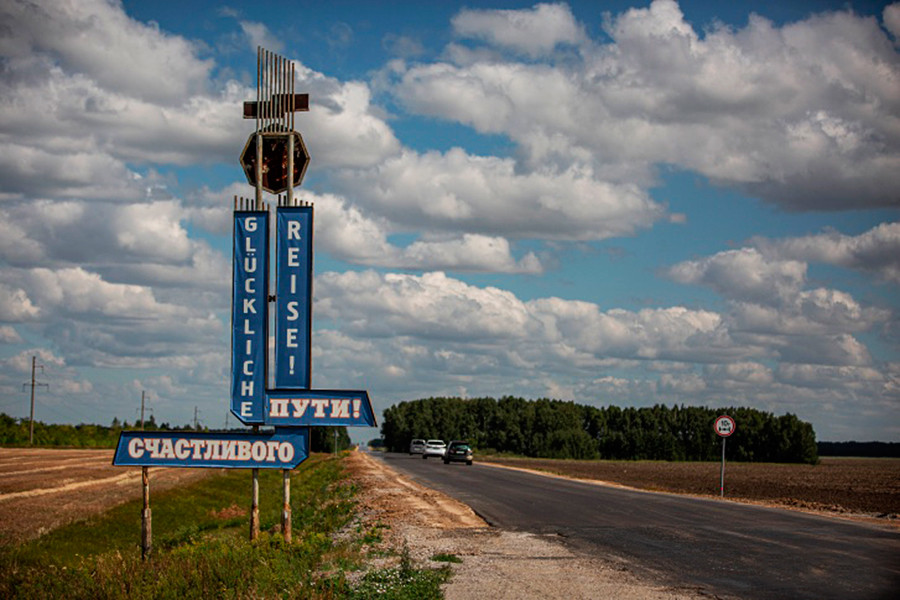 The majority-German area in the region of Altay, neighboring Omsk Region, was established in 1927 and dissolved in 1938 - before forming again in 1991. The area contains 16 villages, with only 16,000 people in total - about 1,000 individuals in each settlement. The nearest city is Slavgorod, about 30 km away. The regional capital, Barnaul, is some 430 km from the villages. 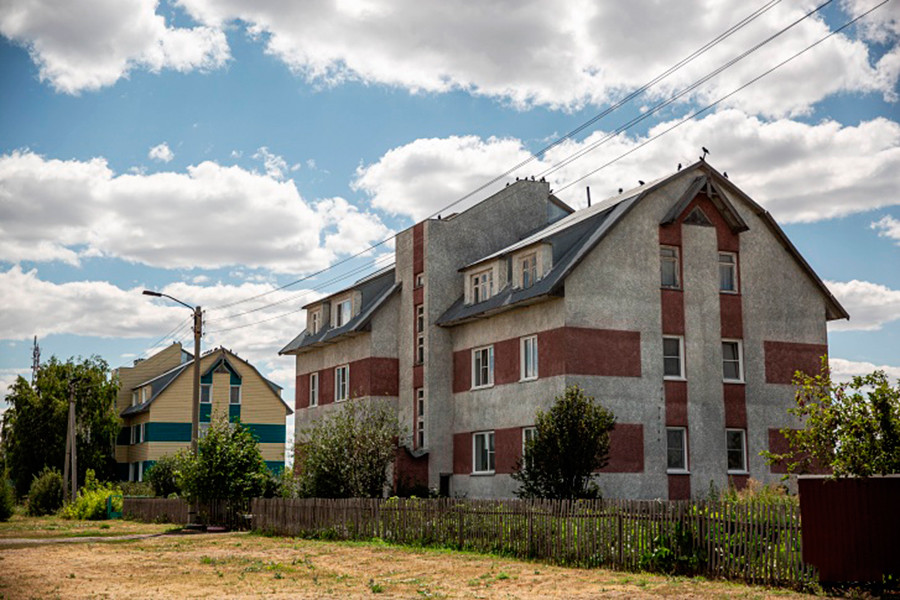 The tourists know they’ve arrived in the German parts, as they are greeted by a large banner in German and Russian. Each village has its own outpatient hospital, schools, sports grounds and cultural centers. All of the administrative signs and names are duplicated in both languages, as well. 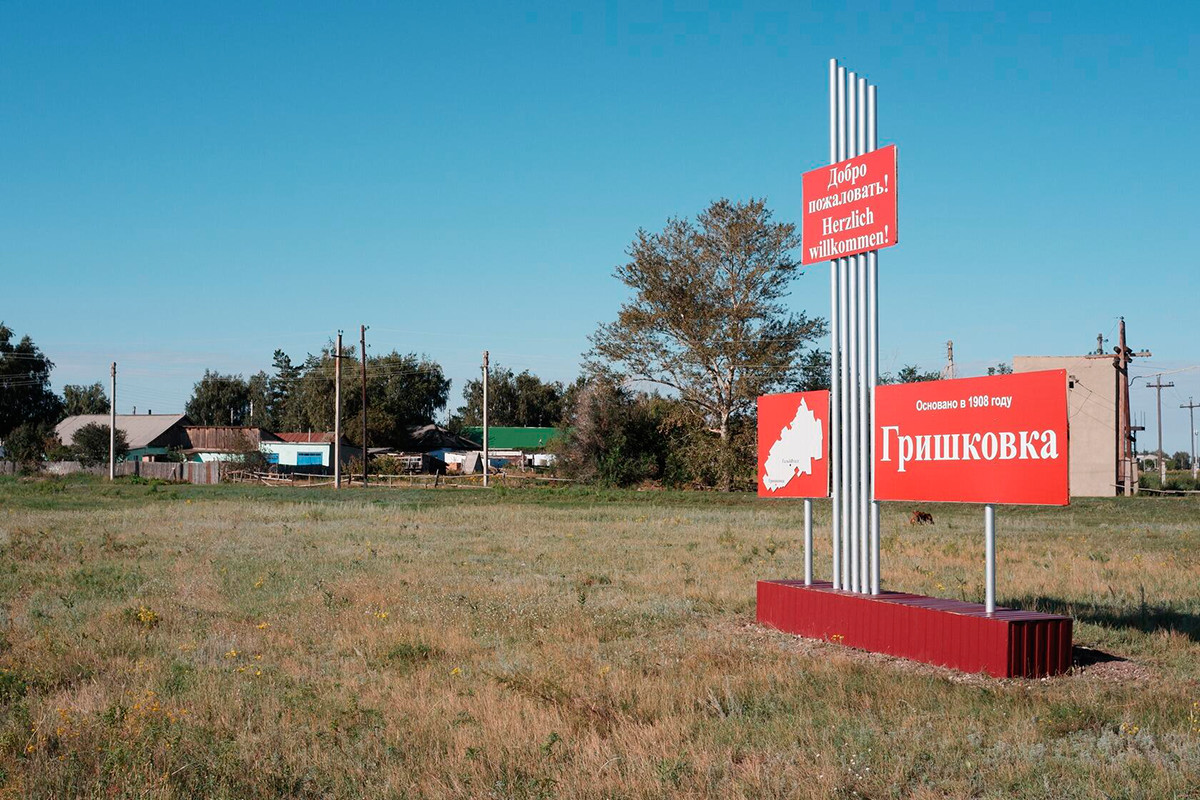 The German villages of Altai are marked by wide paved roads, low hedges instead of fences and sturdy brick houses sitting inside delineated areas. “Every house here is identical, they have two exists and each has a neat private yard,” says Vladimir Mikhailovsky, a resident of Grishkovka village, who moved here several years ago from Kazakhstan. Vladimir teaches chemistry and biology at the local school. He says he tries to stick to the traditions handed down by his parents, and celebrates local customs according to Catholic tradition. 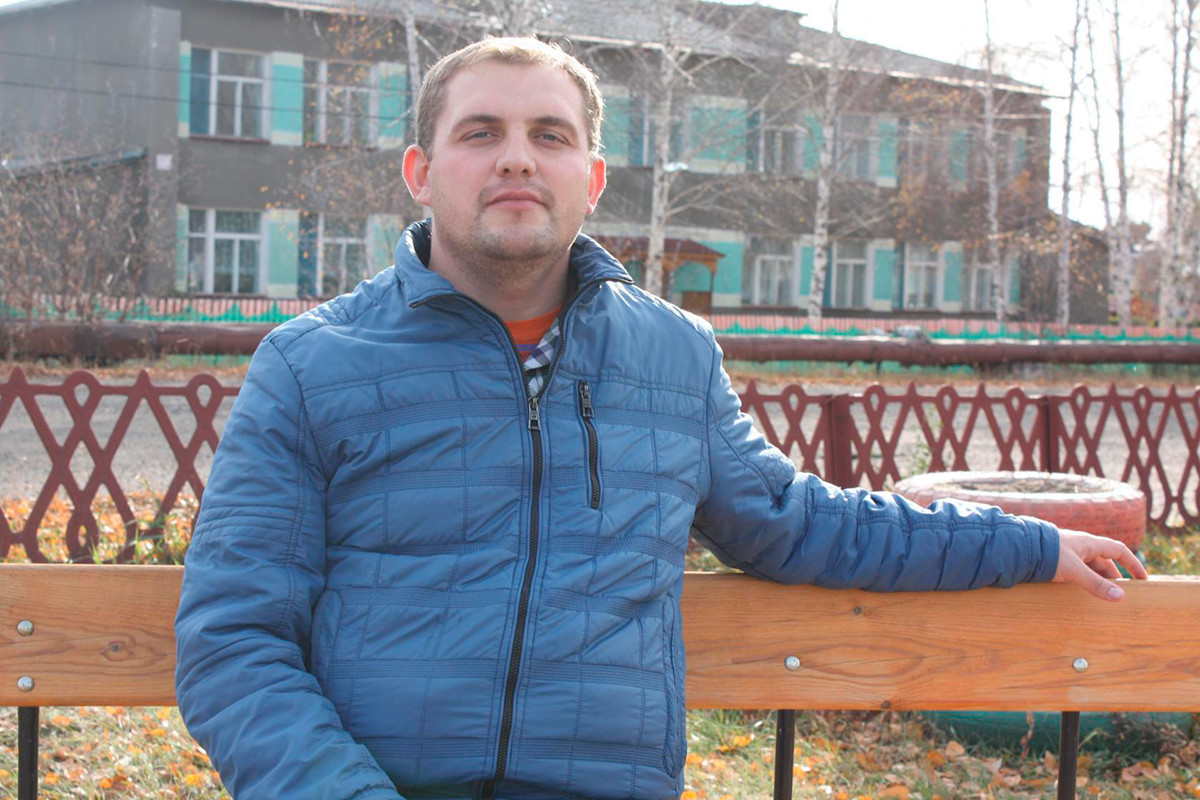 “Every event held in our village contains some elements of German culture - song and dance and so on,” he says. “There is also a museum dedicated to the life of Russian Germans, as well as an annual festival - Sommerfest - where one can sample a variety of national dishes.” 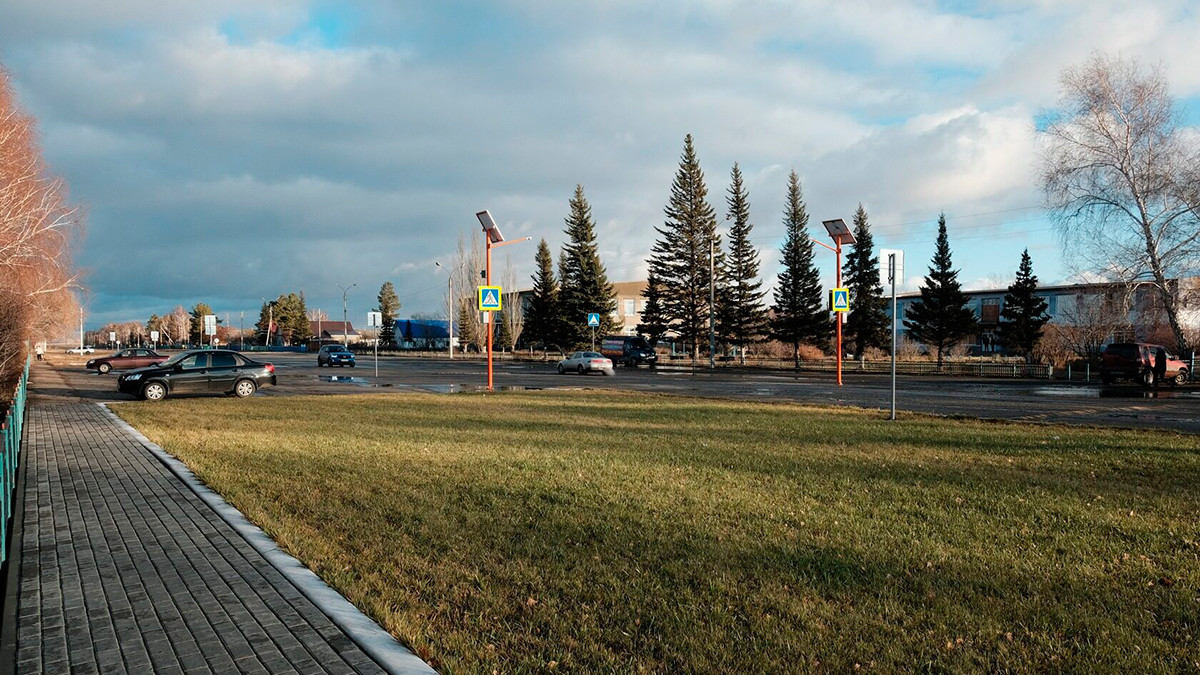 The German national district in Altai.

Most inhabitants subsist on agriculture. These lands, surrounded by countless lakes of the Kulundinskaya steppe, are amicably referred to as ‘Siberian Chernozemye’ (‘Black Earth’ - a region in central Russia). The area’s center is considered to be the settlement of Halbstadt, founded in 1908 (population 1,700) and roughly translated from German as “half-city” (Halb-stadt). Residents who identify as Germans number about a third of that population. 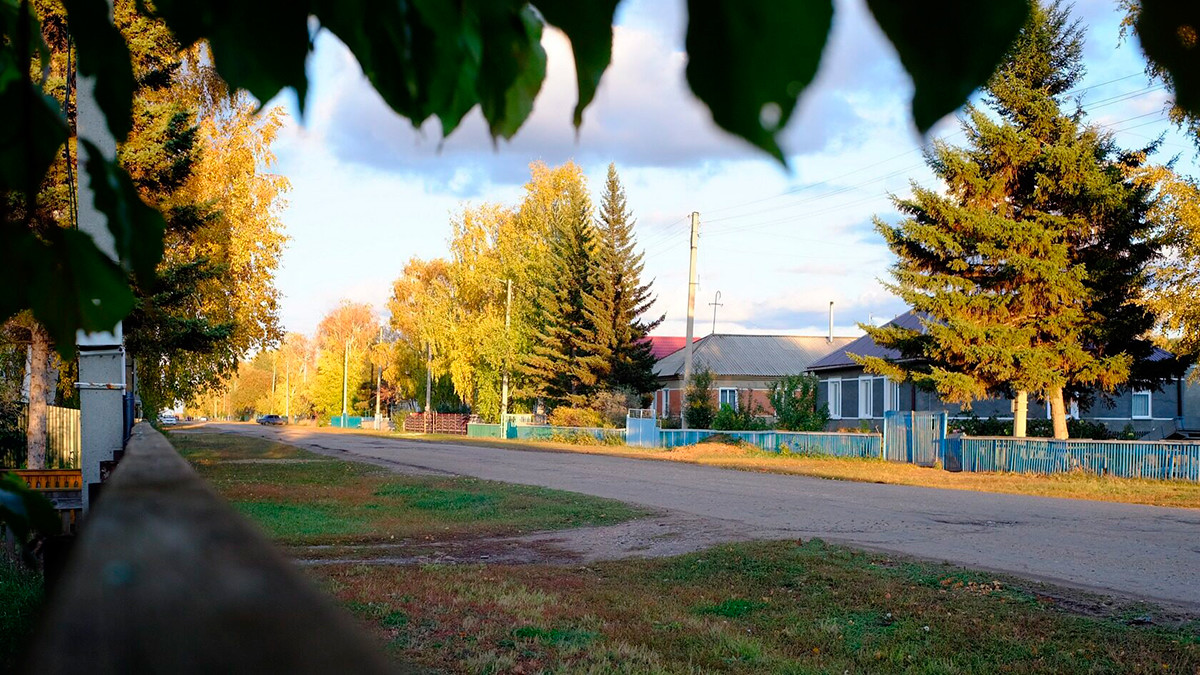 The main local enterprise is ‘Brücke’ (‘Bridge’), founded in 1995 with help from the German government. They make sausages and wieners using classic German traditions and technologies, with natural locally-sourced ingredients. So residents of other areas frequently come here on gastronomic trips. The factory’s director, Petr Boss, is proud of the quality of “German order, coupled with a Russian breadth” inherent to the place. It provides jobs for more than 250 people.