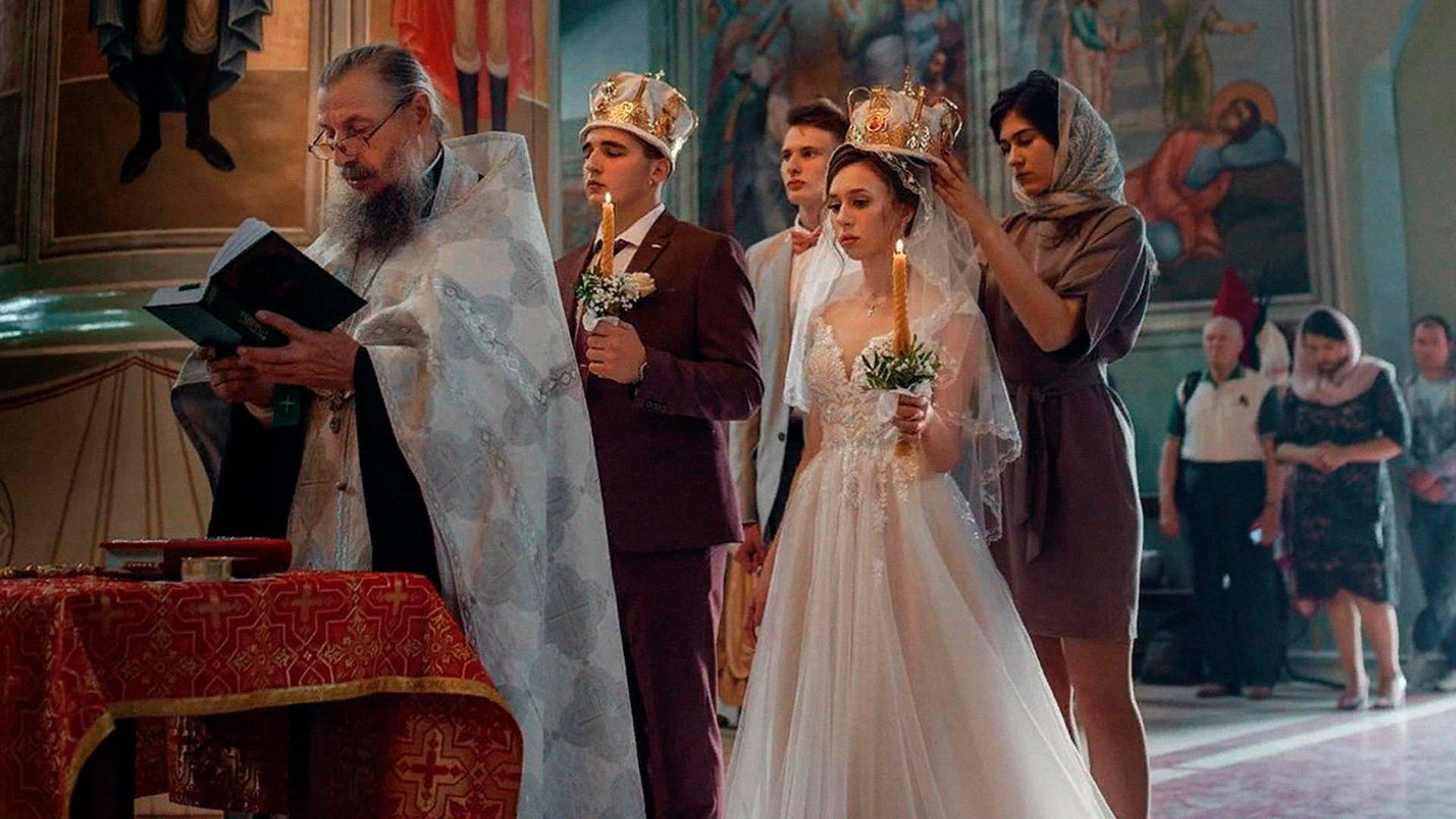 nata_photolife
Interviews with a priest, the sacrament of communion, fasts and obligatory donations to the church are only a small part of what is needed to get married in a Russian church. And it is almost impossible to have a church marriage dissolved.

“This happened to be my second marriage. I married a childhood friend when I already had a young son [from my first marriage]. We were desperate to have children, but I was diagnosed as infertile. In one church, we were advised to have a church wedding prior to beseeching God for a child. Miracles started happening in our family from the moment we took the decision to marry in church. And they are still happening,” 36-year-old Raisa Pozdnyakova says, describing her wedding. It was only after the church wedding and prayers that she succeeded in giving birth to two more sons, she says. 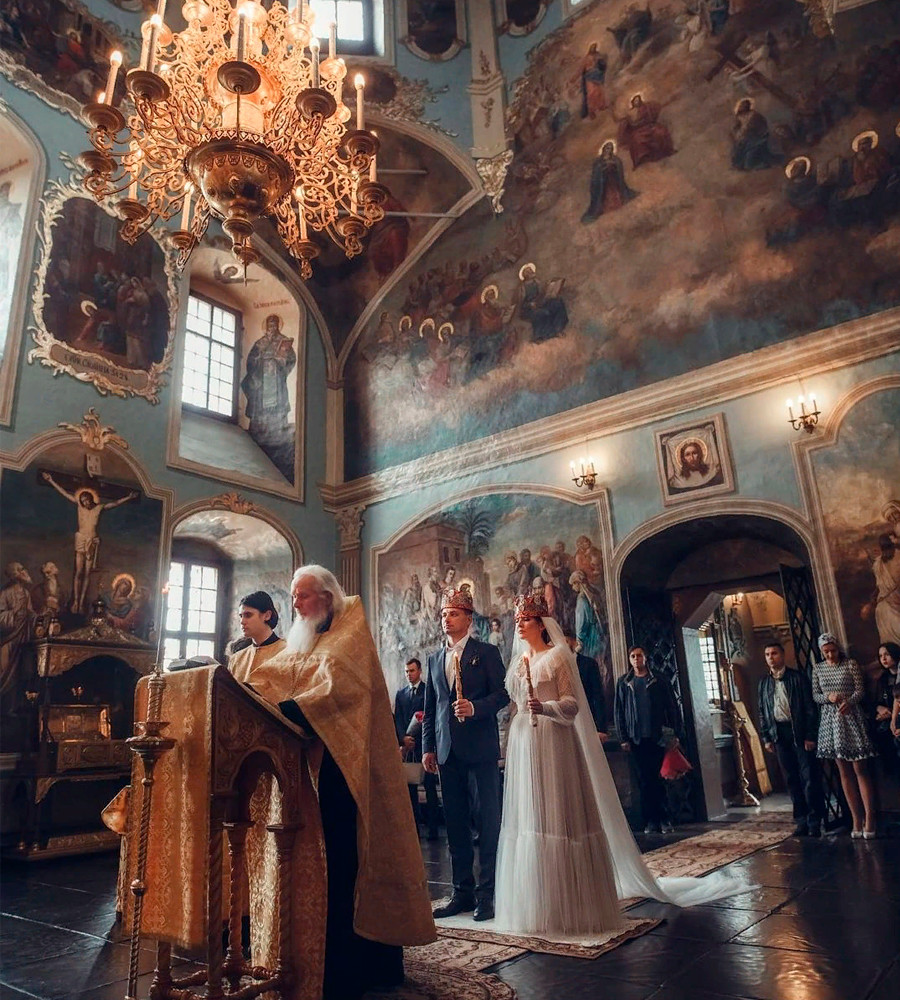 Unlike Raisa, far from everyone believes it necessary to marry in a church - there are no official statistics in Russia on how many couples have church weddings, but 48 percent of Russians are against any initiative to make church weddings compulsory in the country. At the same time, the number of marriages in Russia is also falling - according to Rosstat statistics for 2020, there were 564,000 divorces for every 770,000 marriages in Russia and more than half of couples married in church end up breaking up, RIA Novosti reports, citing Orthodox priests.

So, what does this increasingly out-of-favor ceremony involve, who will definitely not be allowed to have their nuptials in church and how can a church wedding be dissolved if a marriage ends in divorce?

Authorization and preparations for a church wedding

In 2017, a document “On the canonical aspects of church marriage” was published on the website of the Moscow Patriarchate of the Russian Orthodox Church. It consists of a set of edicts on the granting of authorization to marry in church and the procedure for dissolving a church marriage. According to the document, only heterosexual couples who have registered their civilian marriage at a ZAGS - a government agency that records marriages and divorces - can wed in a church in Russia. The Russian Orthodox Church doesn’t recognize cohabitation. An exception can only be granted to couples in which one partner is soon to take part in military action or is gravely ill.

In all other cases, couples who want to wed in church go to the diocesan bishop - the head of the local church administration - and ask for his blessing for the wedding to go ahead. Prior to the wedding, a clergyman gives the spouses several talks, telling them about the significance of the church wedding and explaining details of the procedure. 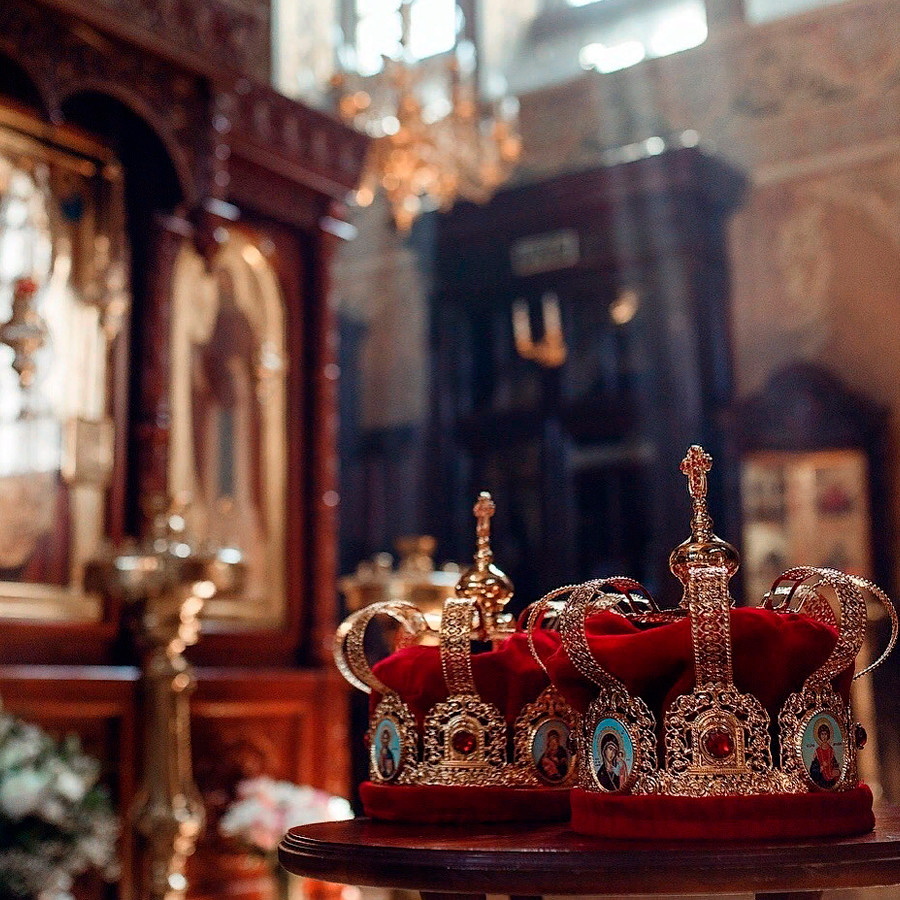 “The priest advised us to fast and also to confess and receive communion before the wedding. Together with the priest, we learned the words that we were supposed to say during the ceremony. He asked us to dress ‘modestly and without conspicuous make-up’ and he asked me to come with my head covered. The prerequisite is to buy candles for the ceremony, a rushnik (a long strip of embroidered cloth) and icons, but we had little money, so our relatives bought them for us,” Pozdnyakova recalls.

The day of the church wedding

According to another bride, Anna Blokhina from St. Petersburg, the morning before a church wedding (the Russian word for a church wedding is venchaniye, which literally means “crowning”) is like an ordinary morning for any bride.

“My husband and I had our church nuptials seven years after our civilian wedding and we had a seven-year-old daughter by then. It was a warm day in May and I did up my hair, put makeup on and wore a blue dress. Along with my husband and our relatives, I got into a limousine and we drove to the church,” Blokhina recalls. 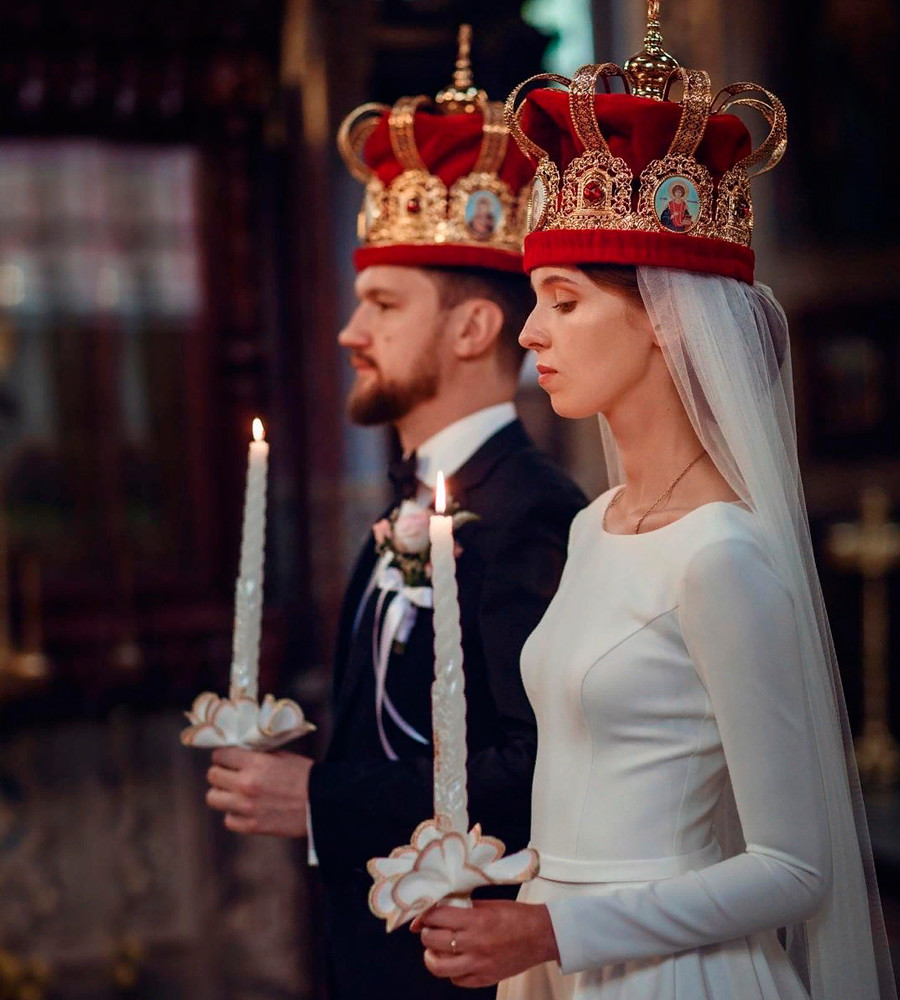 Prior to the ceremony, a clergyman goes up to the bride and groom in white robes - this symbolizes the purity of the souls intending to seal their union before God.

During the ceremony, the senior priest recites a multitude of prayers, blessing the couple and beseeching God to bless them. The bride and groom hold lit candles in their hands - signifying the love that the loving couple should feel towards each other.

After the prayers, the priest puts rings on the bride and groom’s fingers and they subsequently exchange them three times as a mark of love and devotion. Then they stand in the middle of the church on a rushnik  - superstition dictates that whoever stands on it first will have the upper hand in the family. 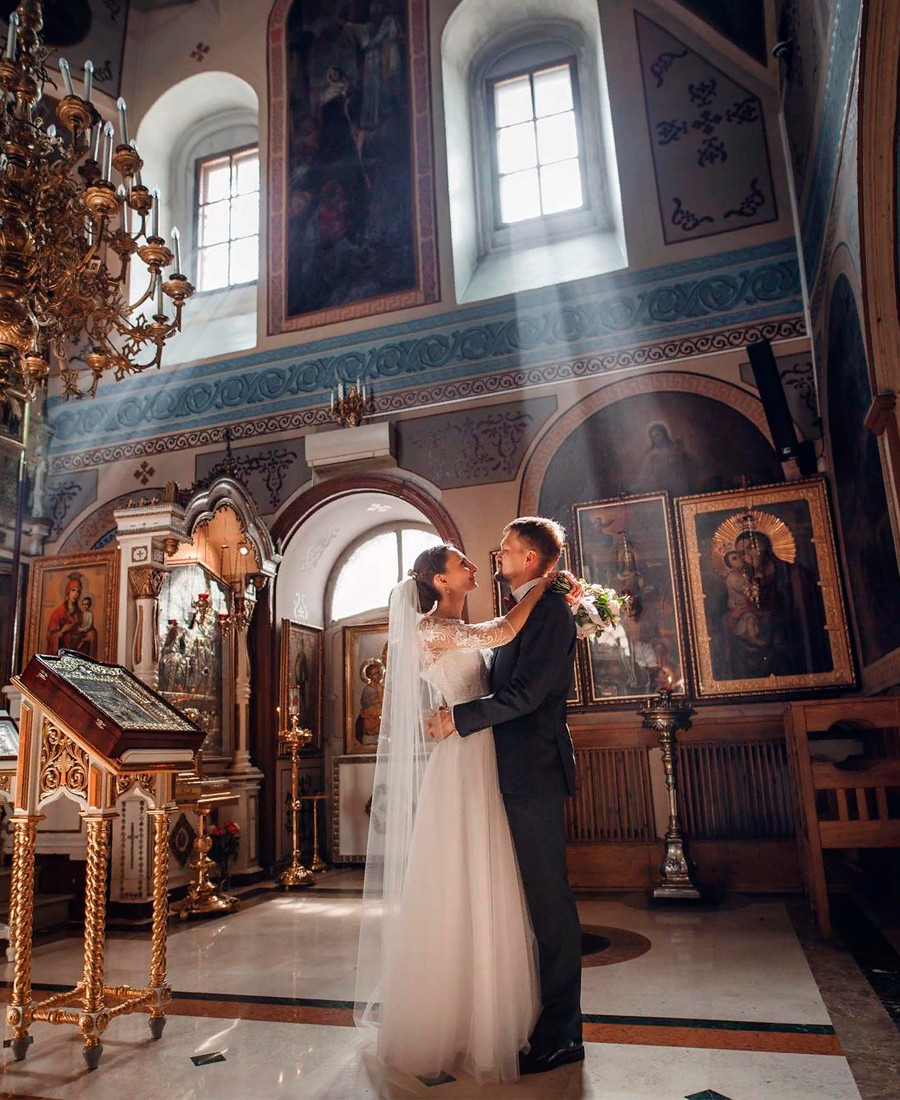 The couple once again profess their desire to wed before God and then the bride and groom kiss an image of the Savior on the nuptial crowns and the witnesses help to place them on their heads, or they simply hold them over their heads, while the priest conducts the ceremony.

After the prayers, the clergyman enjoins the couple to bow their heads before God and offers them a cup of red wine to symbolize the shared relationship between the spouses. Each of them takes three small sips from the cup. Then the priest takes away the wine, joins together the hands of the husband and wife, covers them with his stole, known as an epitrachelion, places his own hand over theirs and leads them three times in a circle round the analogion (a liturgical lectern), while simultaneously performing brief chants. This act of processing signifies the couple’s eternal pilgrimage before God.

Finally, the newly-weds are led to the “royal doors”' [tsarskiye vrata], special doors which symbolize the gates of Paradise. At the doors, the groom kisses an icon of the Savior, while the bride kisses an image of the Mother of God. Then they change places, after which the priest offers them a cross to kiss and presents them with two icons: The groom receives an image of the Savior and the bride gets one of the Most Holy Mother of God. 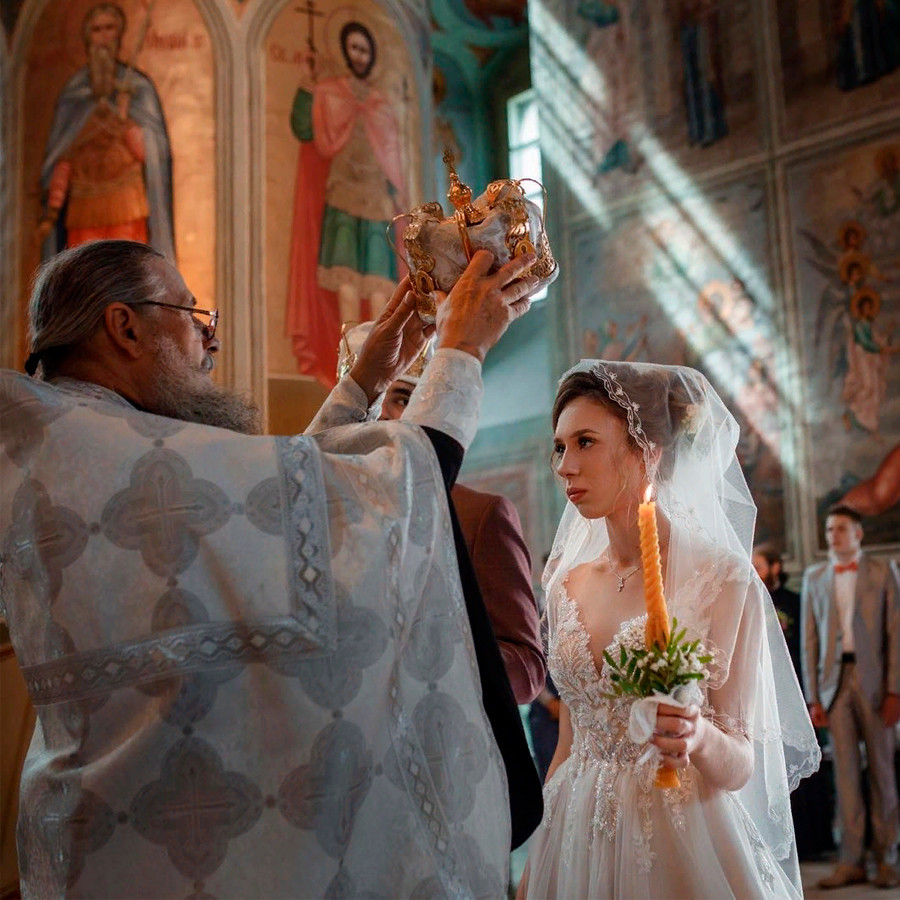 The wedding ceremony lasts between an hour and an hour and a half and, if desired, the couple’s children may take part.

“Our daughter processed in a circle with us holding a candle. It was unforgettable and very moving. It brought tears to my eyes, you know? We spent a long time preparing for the ceremony, so it wasn’t just for the sake of a few nice photographs,” Blokhina says.

It is not forbidden to mark the day of the church ceremony like an ordinary wedding, so after the service Blokhina, her husband and guests went on a boat trip and then gathered in a restaurant.

It is difficult to have a church marriage dissolved - the Russian Orthodox Church has no “uncrowning” ceremony, a civil divorce is not a reason for annulling a church union and a decision on each dissolution of marriage is taken by the diocesan authorities. The Orthodox Church can, however, pronounce a marriage invalidated if one of the spouses: 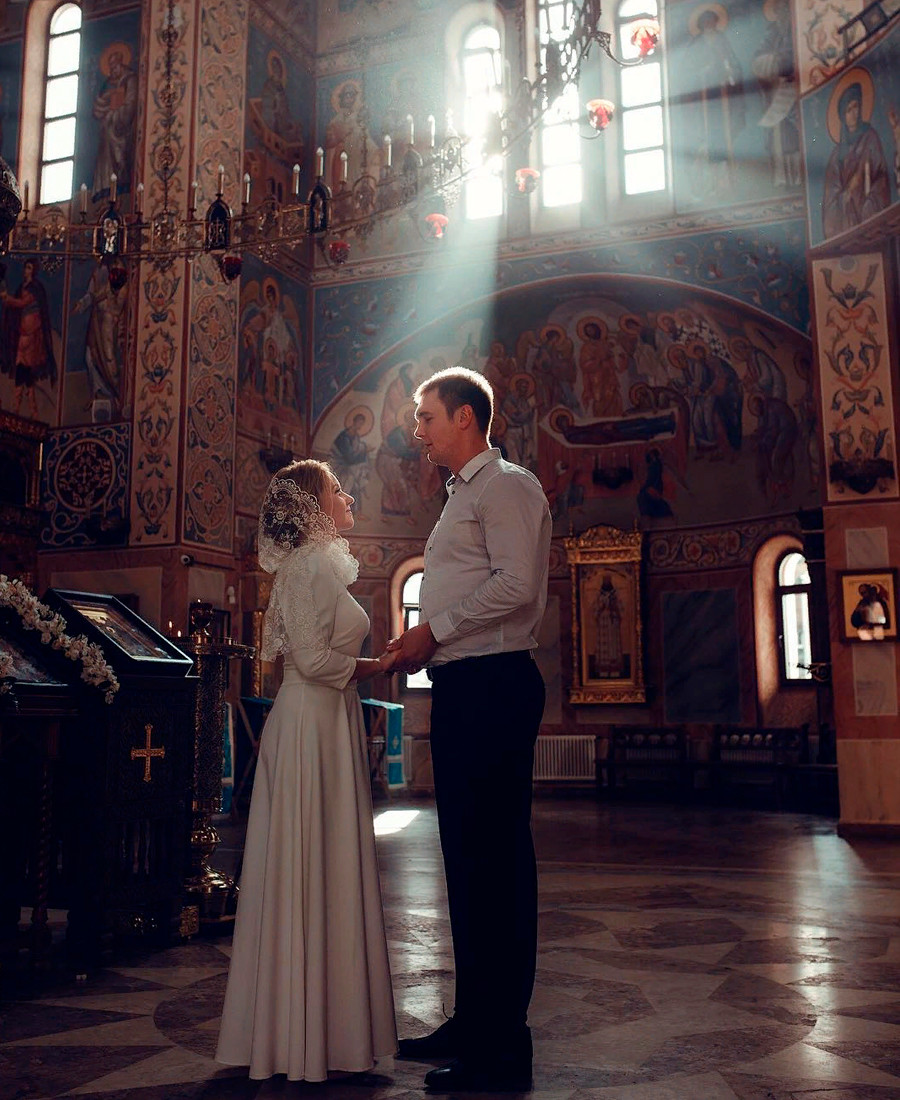 A spouse can apply to the diocesan authorities for a marriage to be dissolved two years after it was first contracted. The bishop of the diocese studies the request and if he decides that the marriage cannot be saved, he issues a certificate declaring the church marriage void and also permits the innocent party to be married in church a second or third time. The guilty party, on the other hand, only gets this permission after due penitence and the performance of a prescribed penance (known as an epitimia) - a church punishment that may consist of exclusion from Holy Communion for a period to be specified by a senior priest.

“I decided to have my church marriage dissolved after my husband was unfaithful and to marry for a second time, but the process was quick. I spoke to the priest and he told me that in cases of adultery the dissolution is automatic and no permission is needed. I now have a happy life,” according to Liliya from Krasnodar (surname and age withheld at her own request). 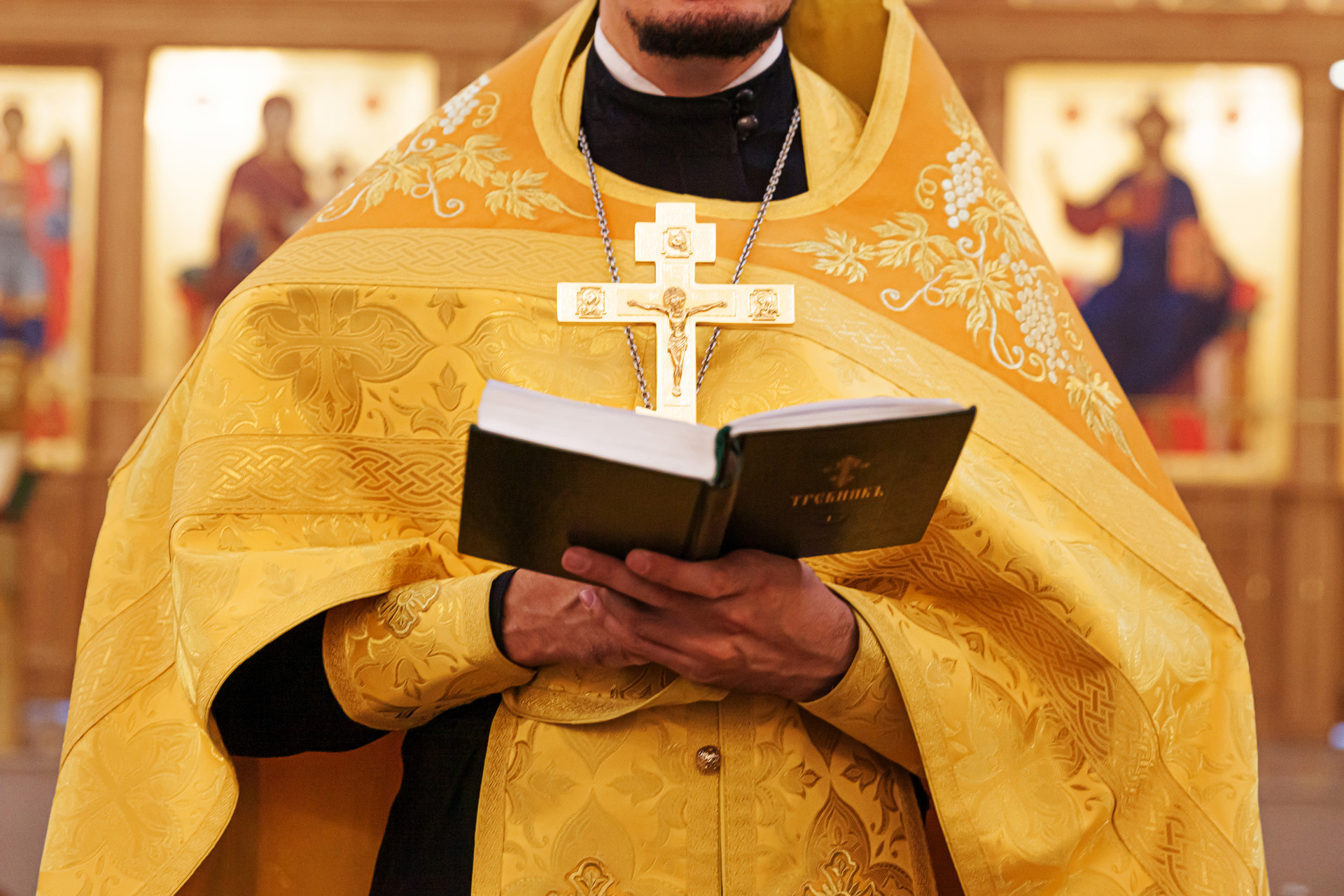 A decision on dissolving a marriage is sometimes taken by a commission consisting of several clerics or priests and then the process of a “church divorce” can be a long drawn out affair.

Women’s and Orthodox Church forums also hold discussions about the dissolution of church marriages. According to contributors, some divorced couples have to wait several years for an annulment.

“I applied to the head of the Church in Altai Territory two years ago following my divorce, but they still haven’t granted my request. They can’t tell me when I can expect a reply. The church does not like carrying out this formality,” complains Evgeniya from Barnaul.