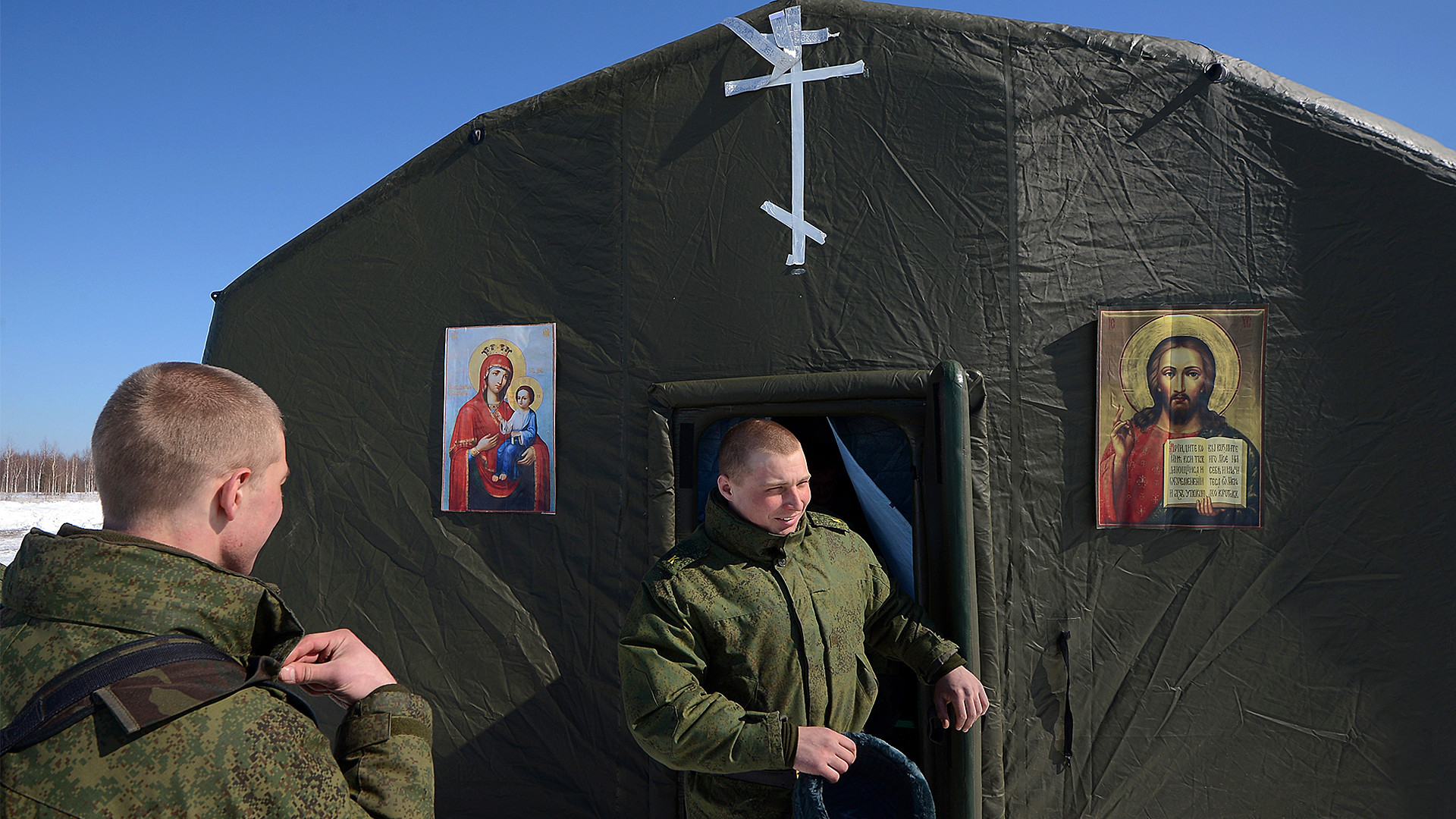 A mobile church set up at a landing spot

Maxim Blinov/Sputnik
Mobile chapels on wheels, inflatable churches and khaki-colored candles for the military are just a small part of the cooperation between the Russian Orthodox Church and the Defense Ministry. Here is how the Orthodox Church got its own military department and how it works.

One of the highlights of the Army-2020 forum, which was held by the Ministry of Defense from 23 to 29 August in the Moscow Region, was martial robes for the clergy. Photos of several models of cassocks, including camouflage ones, have caused a bit of a sensation online. In fact, the Russian Orthodox Church has long had its own military department.

The first military priests and a church on a KamAZ truck 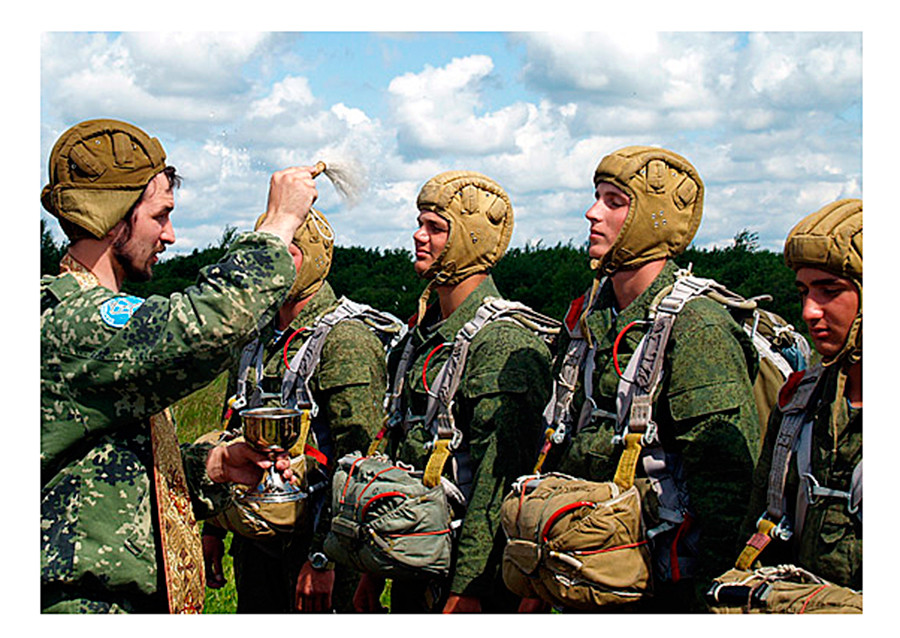 The Ministry of Defence of the Russian Federation

In 2009, then president of Russia, Dmitry Medvedev, ordered for the institution of the military clergy to be revived. Gazeta.ru reported that the post of assistant commander for pastoral work with believers would be introduced in military units and would be open to clergymen. A total of 242 vacancies were opened. In 2011, priests' influence in the armed forces expanded: they could not only conduct services for officers and soldiers, but also offer "moral guidance" to service personnel. In addition, priests consecrated all types of military equipment, from ships to missiles.

The report, however, continued to mention that there was an acute shortage of priests, with some 90 percent of positions unstaffed. Then in 2012, Medvedev allowed priests to take a deferment from military service.

A year later, the first batch of military clergymen graduated from the Defense Ministry's Military University, said Alexei Artemyev, a lecturer with the Information Support Department at the university.

“The Russian Orthodox Church seeks to position itself as a spiritually influential ideological entity in the Russian armed forces. It sees its main goal in developing those qualities in military personnel that would allow them to achieve spiritual superiority over the enemy,” wrote Artemyev in an article. 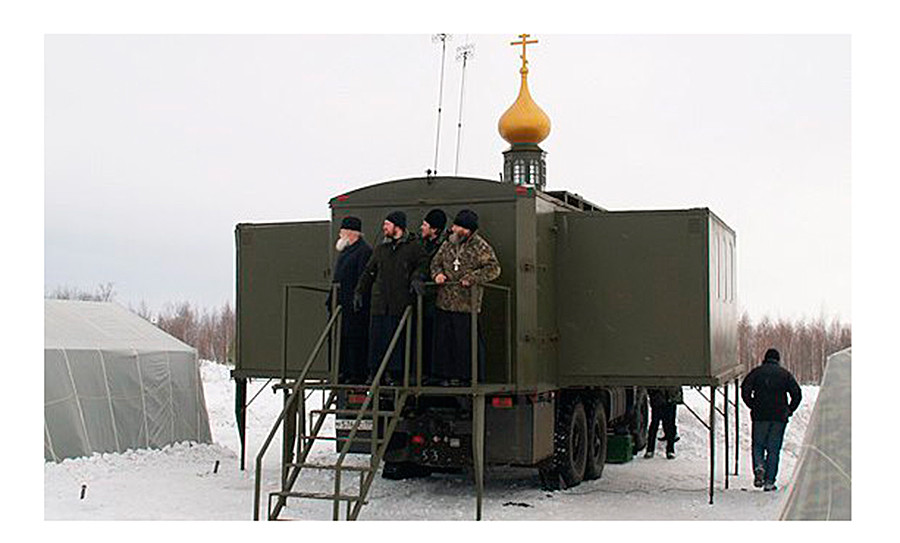 A church on wheels

In 2013, as "a morale-boosting exercise", the Airborne Forces began testing an Orthodox church on wheels, set up on the basis of a KamAZ truck. The idea was to use mobile churches for the "spiritual nourishment" of service personnel during exercises, armed conflicts and wars. The original plan was to set up churches in all military units of the Armed Forces, however, there have been no subsequent reports about further progress in this large-scale project.

In spring 2013, an exercise for Air Force priests was held on a snow-covered field in the Ryazan Region. Some 40 Orthodox priests jumped with parachutes, and learned to set up an inflatable church, consisting of a tent that the priests inflated with electric pumps. Crosses and iconostases were attached to the church walls with Velcro.

“How can the church be useful? Either by hitting the enemy on the head from above [by dropping it from a plane], or by deploying it on the frontline for praying,” said Boris Lukichev, head of the Directorate for Pastoral Work with Believers in the Russian Armed Forces. However, no further reports about a large-scale deployment of these churches followed. 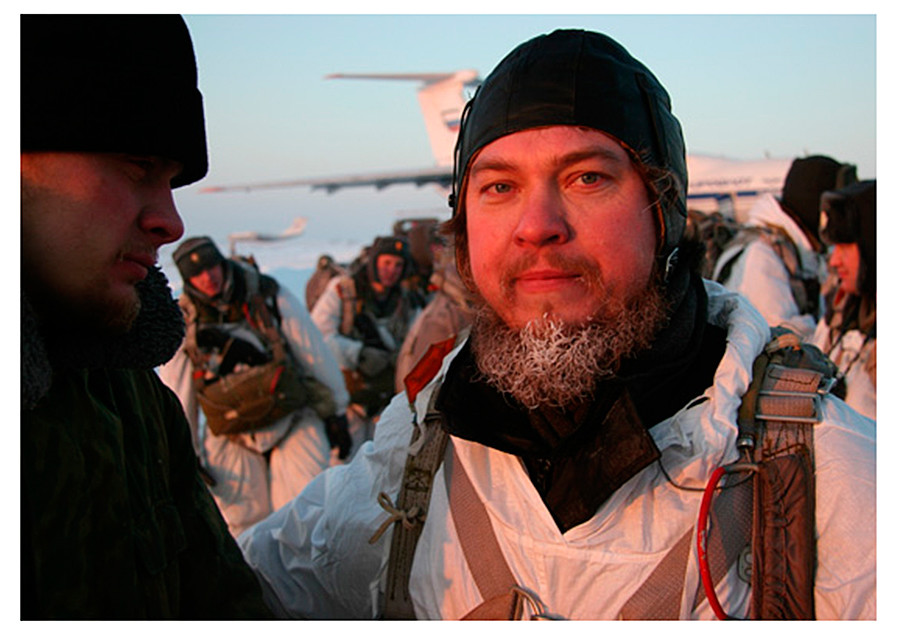 The Ministry of Defence of the Russian Federation

By 2015, there was still a shortage of military clergy: of the 242 positions available, only 132 priests were employed full-time, including two Muslim imams and one more for Buddhists. By 2019, that number increased to 200 clergy, the BBC reported.

In 2016, the Central Military District for the first time unveiled a special cassock for military priests. It resembled an ordinary military uniform, except that instead of the insignia, there was an embroidered Orthodox cross;and instead of the name and rank of the officer, there is the name and church rank of the priest. The uniform was intended for priests serving on field missions and military exercises. 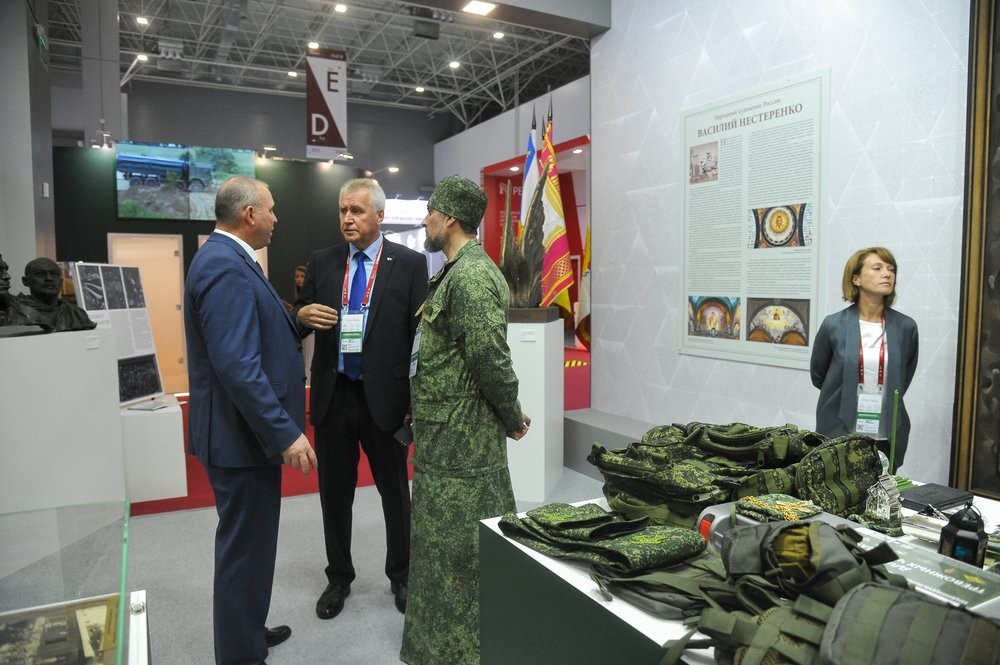 A military priest at the Army-2020 expo

Together with the new cassocks, the Army forum presented “military” wax candles in khaki color, and other church utensils. Despite all of these efforts, the Orthodox Church did not approve of the new camouflage vestments. 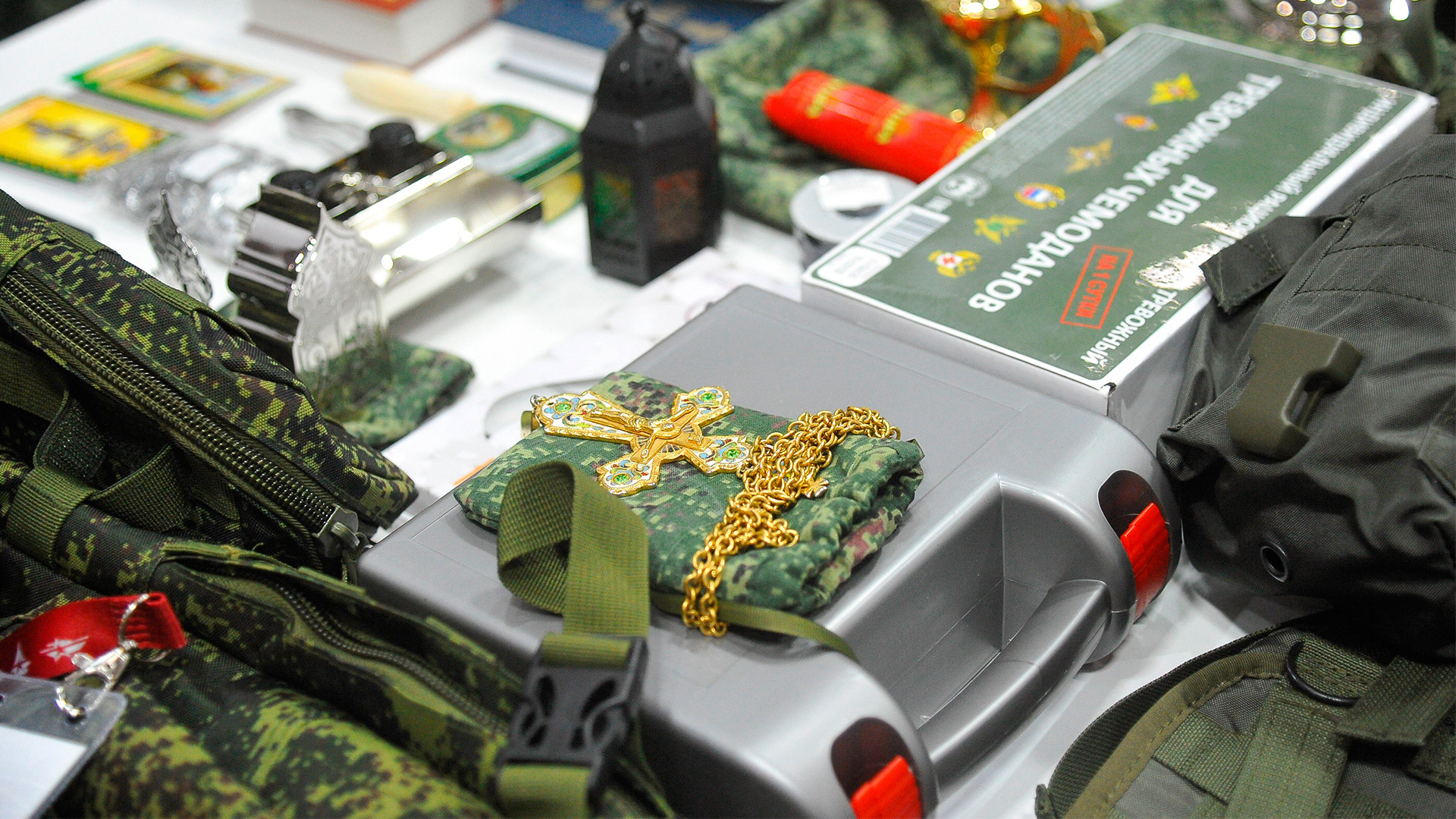 A cross of a military priest 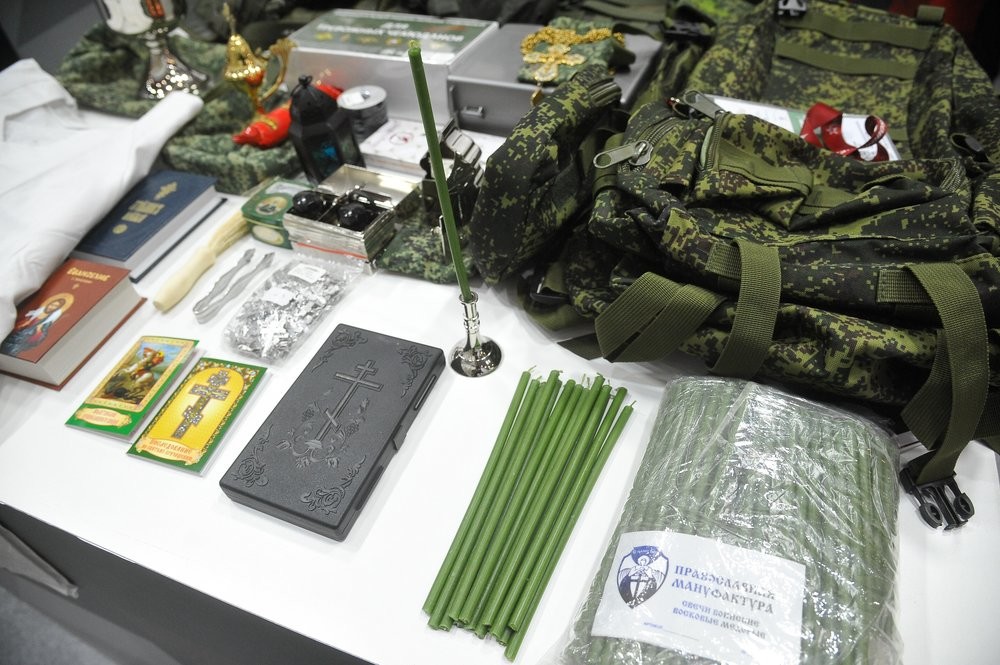 Military candles, a priest's uniform and other items for military Orthodox services

One of the main results of the department's labors was the construction of the main church of the Armed Forces in Patriot Park in the Moscow Region. According to Znak.com, the cathedral cost 6 billion rubles ($80.4 million) to build, with half of the sum raised through donations and the other half allocated from the state budget. When including the cross on top, the cathedral is 95 meters high, making it one of the tallest Orthodox churches in the world. 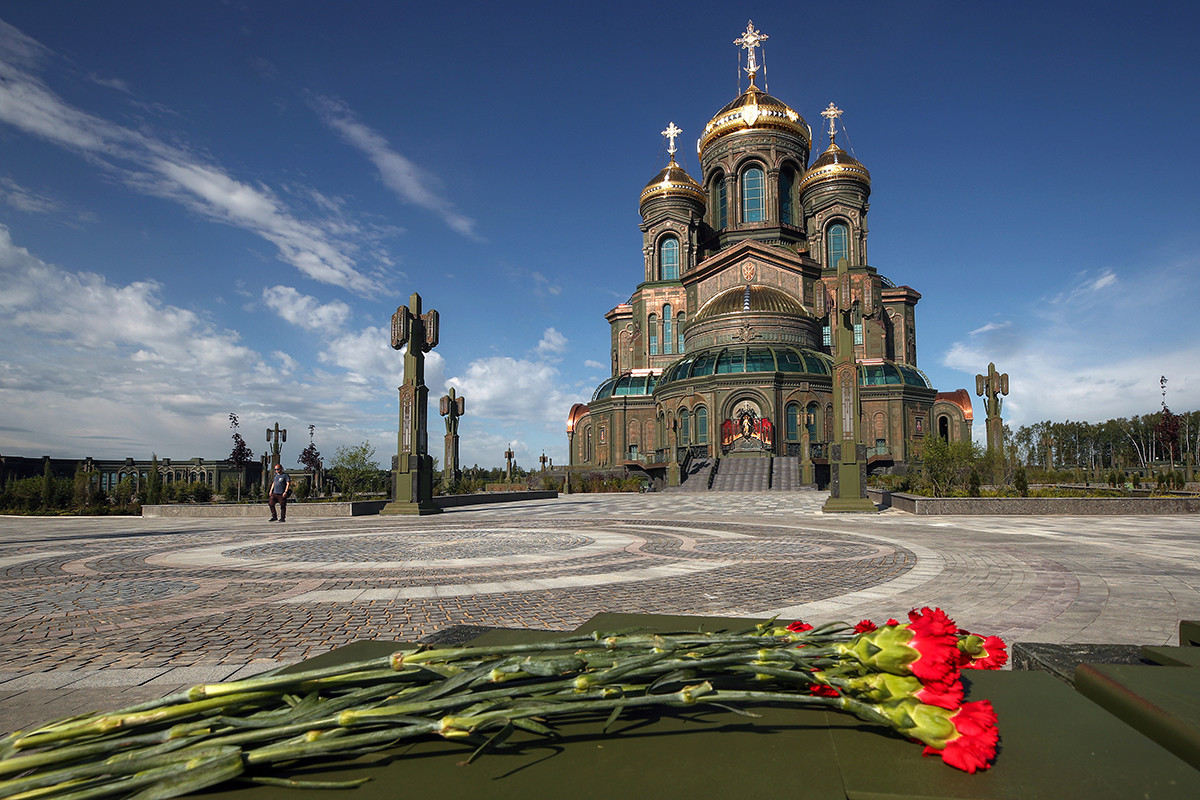 The Main Cathedral of the Russian Armed Forces

At first, the cathedral was decorated with a mosaic depicting Putin, Stalin and other political figures, but later it was removed. The cathedral was consecrated in June 2020, and in late July it held its first church wedding: two war veterans who had been married for 58 years.

The ceremony was performed by the church sacristan, Bishop Stephen. He noted that "there was a special honor in getting married in a place that forms part of our country's cultural heritage".