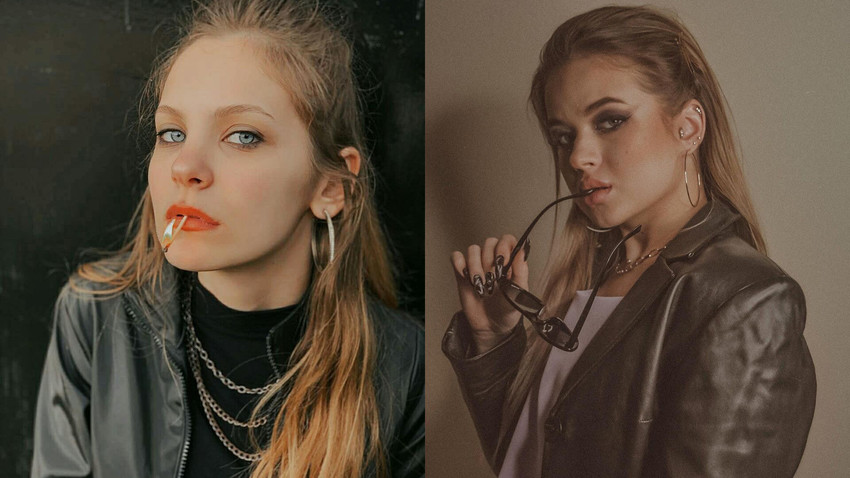 @nznznastya; @capitalinus
The latest fashion trend among young people in Russia is to take their inspiration from the esthetic of the flashy “criminal world” look of the past.

Sultry, smoky eyes, eyelashes with a thick layer of mascara, lips contoured with dark brown pencil almost half a centimeter outside their natural edges, hair backcombed and lacquered solid, a heavy gold chain and a leather raincoat - these are the first things one would think of if asked to describe the appearance of a fashion-conscious woman of the early 1990s.

Gaudy make-up, bouffant hair, a black turtleneck and a leather jacket or raincoat - all these were once symbols of the times. It is what almost every other woman, and not just glamor models, looked like in the late Soviet period. The proof is to be found in old photographs in family albums.

But the image of the dangerous femme fatale with a cold look in her eyes has a very specific source of inspiration: It is what the girlfriends of provincial gangsters in Russian TV shows looked like. And it is this image that Russian bloggers were looking back to when they launched a new beauty trend for “the local crime boss’s girlfriend” look.

The fashion for the esthetic of the ‘Roaring Nineties’ gained traction on TikTok, when user Viktoriya Andreyeva posted a video, in which she recreates the look of the wives of various underworld bosses from Russian TV shows and movies. Viktoriya first showed what she looks like in everyday life.

After that, she made her eyebrows dark and thin (many women at the time plucked their brows until there was nothing but thin “threads” left). Then she applied black eyeliner to her eyelid margins and dark eye shadow, put a copious amount of blush on her cheeks, did up her hair and topped it all off with “clothes from mom’s wardrobe”.

The video gained several million views and sparked a wave of similar makeovers.

In the comments, you can find many fans of the forgotten esthetic of the Nineties. People recall Russian women’s fondness for the products of luxury houses Versace and Dolce & Gabbana and the fashion for flaunting one’s wealth with gold jewelry.

Fashion commentators don’t rule out that the trend for the “Criminal Nineties” will conquer more than just the social media.

“The expansive soul of Russian women yearns, at heart, for the feast of life. And what feast and what fun can there be without Versace, a punch-up or karaoke? A passion for risk and bling and underworld romance as summed up in the words of the song ‘Mom, I’m in love with a dude’, demand to be out there in public,” sums up style expert Larisa Bulgakova.