These AMAZING Russian watches are desired all over the world

Lifestyle
Nadya Kuprina
The Chaykin Manufactory is the only one in Russia to produce ultra-complex mechanical timepieces coveted by collectors all over the world. This watchmaker and inventor has 86 patents to his name. 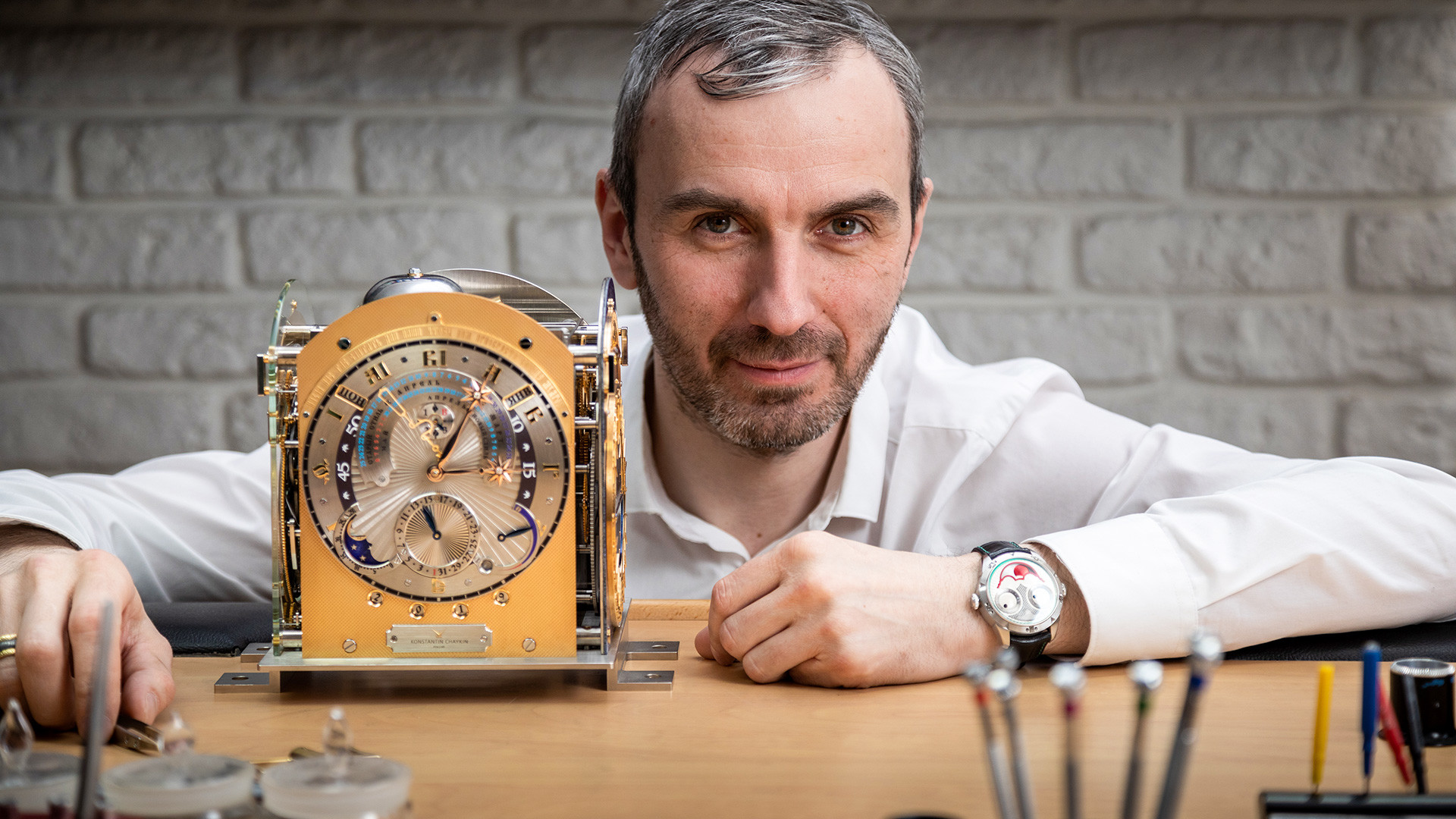 Konstantin Chaykin is an independent Russian watchmaker with dozens of inventions to his name. His creations have long gained worldwide recognition: for four years (until 2019), he was the first and only Russian to head the most prestigious association of independent watchmakers in the world, Académie Horlogère des Créateurs Indépendants (AHCI). In April 2021, he became the only Russian to receive a WIPO Medal for Inventors, which is awarded by the World Intellectual Property Organization to outstanding inventors in recognition of their contribution to national wealth and development. Furthermore, very few watchmakers globally have ever received this accolade. 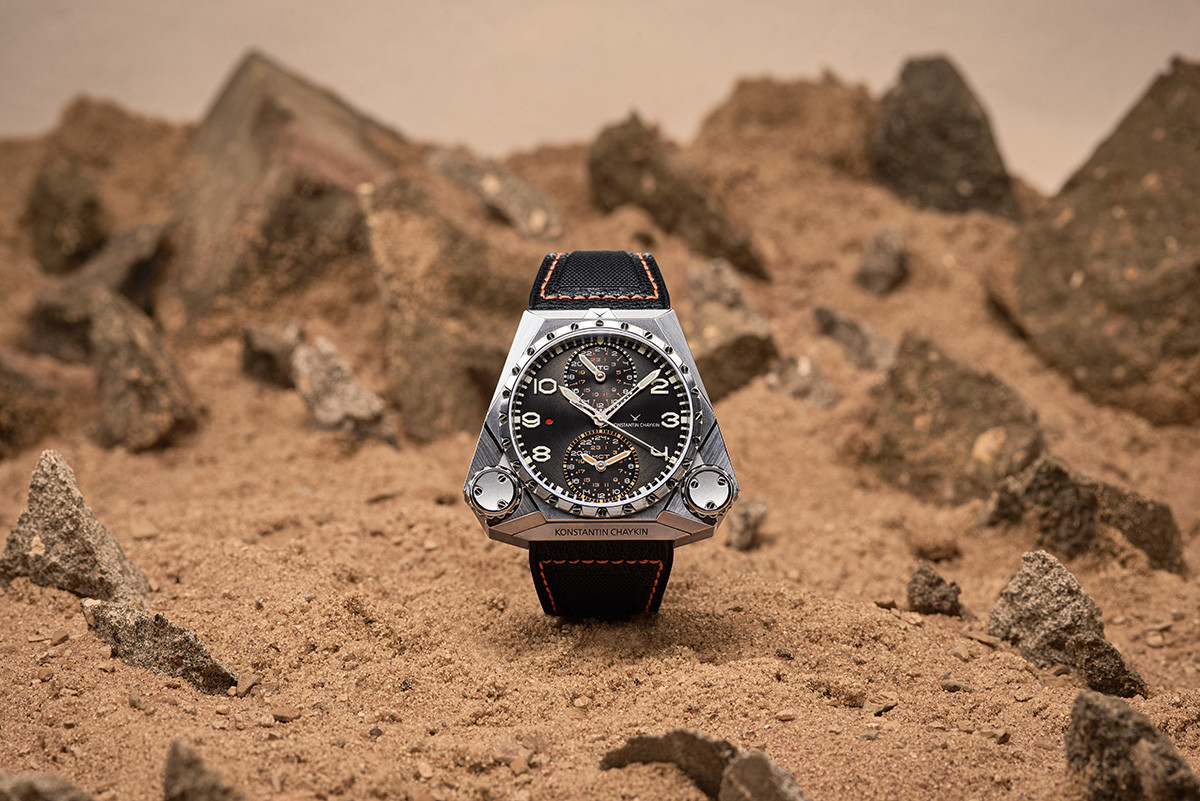 Watches created by the Chaykin Manufactory regularly take first places at leading international exhibitions, but his ambitions stretch even further: Chaykin's latest creation, the Mars Conqueror 3 watch, synchronizes time on Earth with time on Mars and is intended for pioneers exploring the universe.

Konstantin started a career in the watch industry almost by chance. “There is no relevant family history,” he tells Russia Beyond. “Except that my grandmother worked as a clerk in a watch repair shop on Nevsky, 23, in what was then Leningrad." As a child, following in his father's footsteps, Konstantin took up radio mechanics as a hobby. First, he joined a radio mechanics group at a pioneer camp ("A unique experience! Using Morse code and amateur radio, we - Soviet boys - could communicate with the whole world!"), then a radio mechanics club and, finally, a technical college. The talented young man was captivated by the exciting world of mechanics, pushing the boundaries of reality. “However, the excitement was soon dulled by service in the army (as a signalman, first in Karelia and then in South Ossetia),” he says. 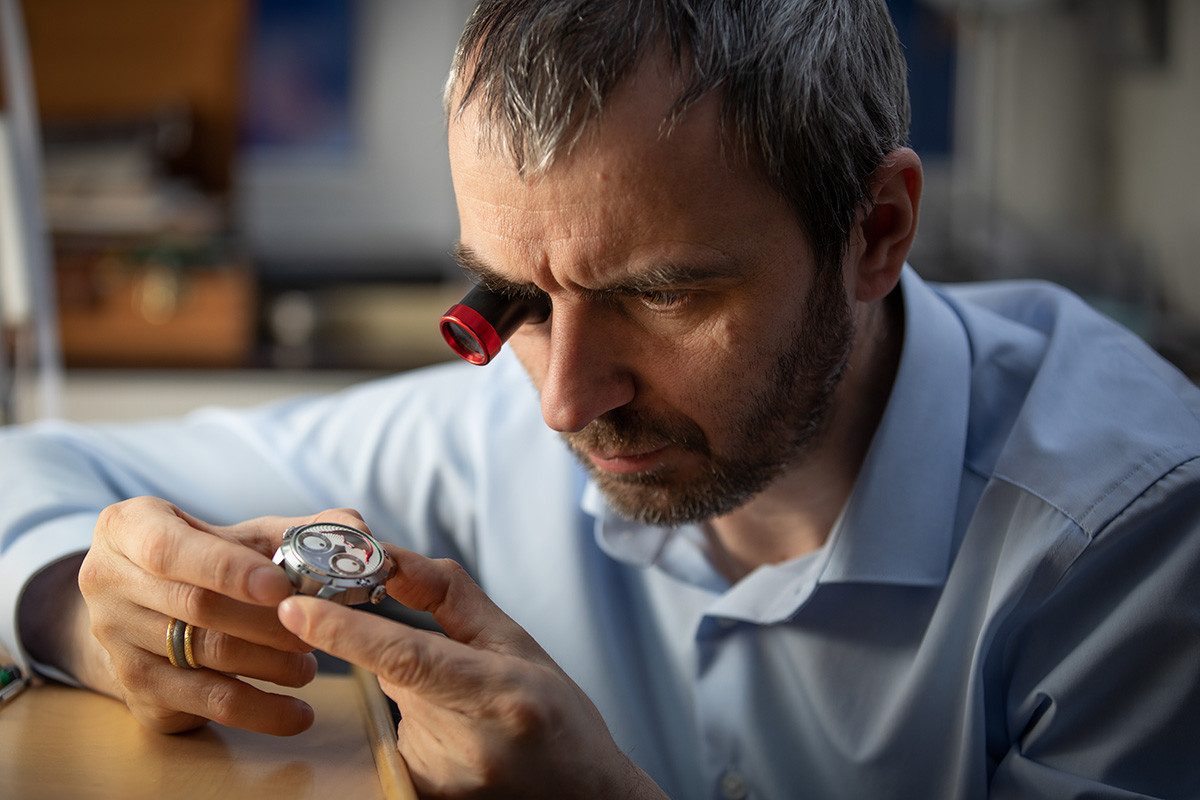 After demobilization in the 1990s, he tried out different jobs, from a fitter to a sales agent, until he started selling watches. “My partner and I quickly set up a business, which did not take much time, so I became interested in figuring out what was inside a watch, how it was made and how it worked,” says Chaykin. He began to disassemble and study watches, both modern and old ones, mastering the profession on his own. “Back then there was no YouTube or world wide web as such,” he recalls. “So I studied from books. But the main thing was that I studied by trial and error, and I think that was what conditioned me to see this profession as a constant creative quest. I am not interested in repeating what others have done, I am primarily interested in inventing, doing something that no-one has ever done before."

From the first tourbillon to a Martian collection

Konstantin observes that now he no longer needs to look inside other people's mechanisms. All paths have now been explored, all that came before him has been studied. When in 2003 Chaykin decided to open his own factory, he sold his collection of watches to raise start-up capital for his business. Recognition and orders came with his first major success - the first tourbillon created by a Russian watchmaker. 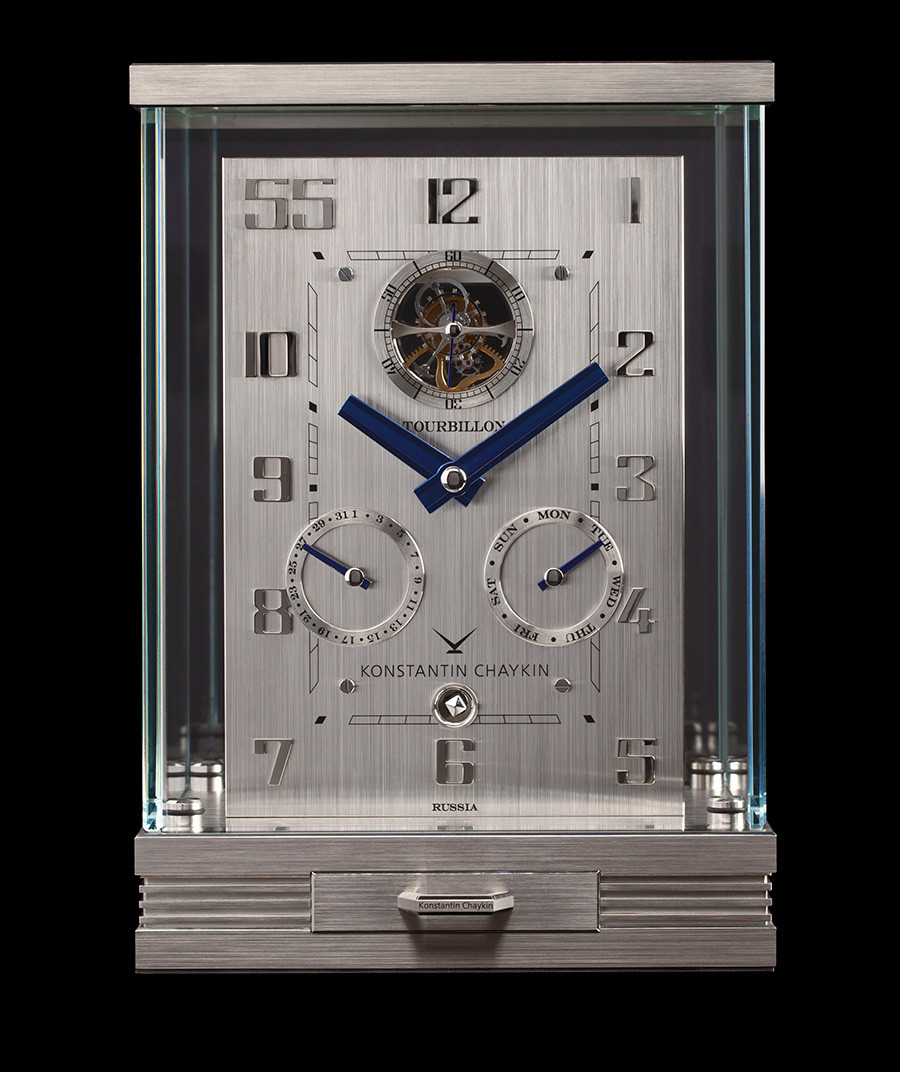 Before Chaykin, no Russian watchmaker had achieved it in 175 years. A tourbillon is a special element in a watch that negates the effects of gravity, making the timepiece more accurate.

“At the time, it seemed something very complex, from the world of fine watchmaking, which no-one in our country was doing,” says Konstantin. He made the first table clock with a tourbillon himself, literally with his own hands. The ambitious creation by an outstanding self-taught watchmaker, who came out of nowhere, was reported in industry publications and Chaykin became famous overnight. 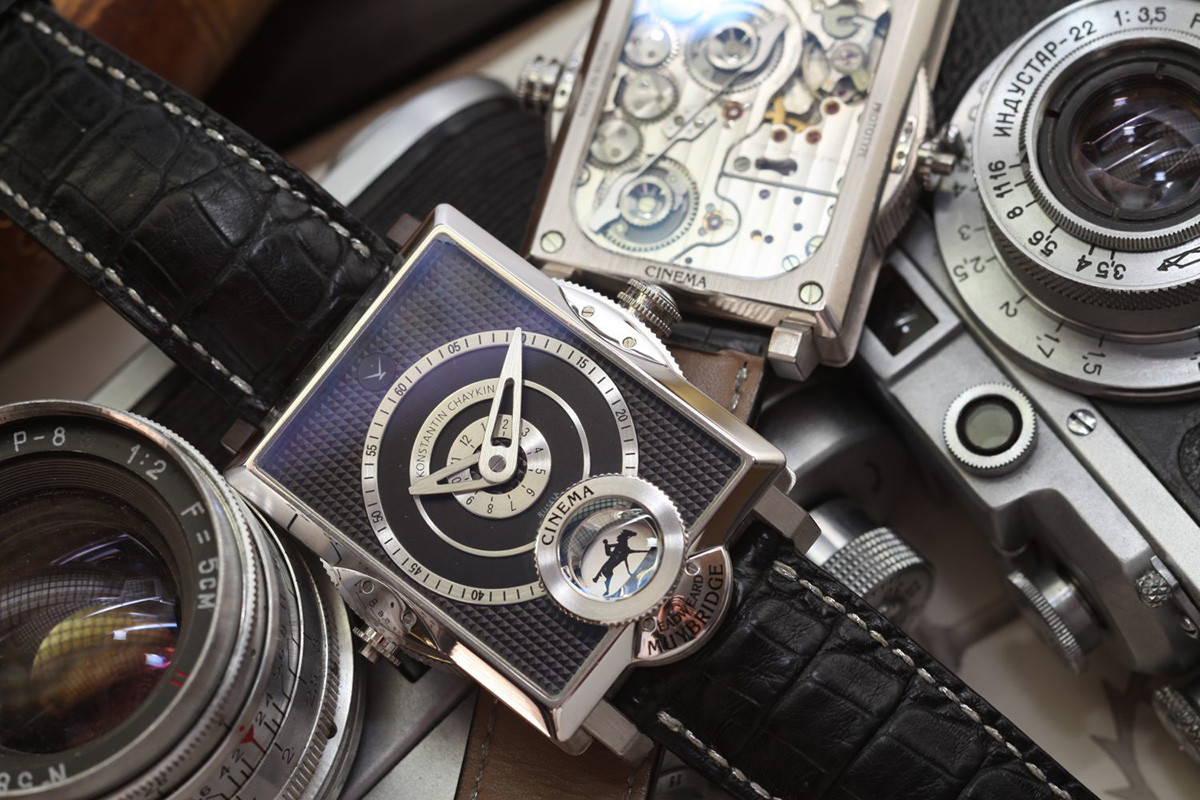 Further on, his watches became even more complex. “My first wristwatch (in 2008) could hold power for 10 days. I wanted to make a 'long-lasting' mechanism,” he recalls. Next came unique models that Konstantin still considers some of the most complex in his collection. 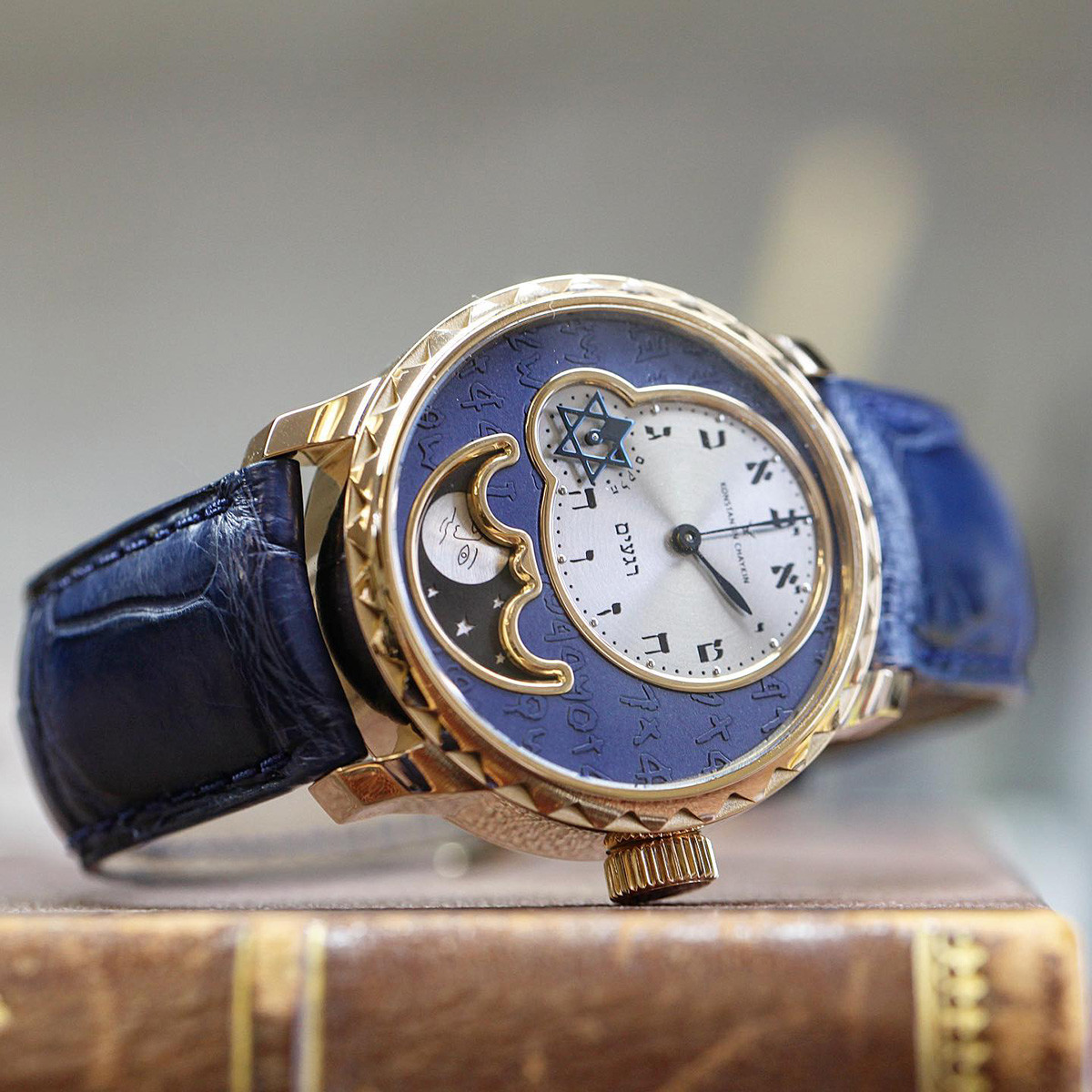 These are: the Decalogue wristwatch, which shows time in chalakim and regas, according to Jewish tradition; the Cinema watch, which has a miniature device like a movie projector mounted inside, showing moving pictures; the Lunokhod watch, which shows phases of the moon in a sphere in the heart of the dial and, finally, the Martian collection. 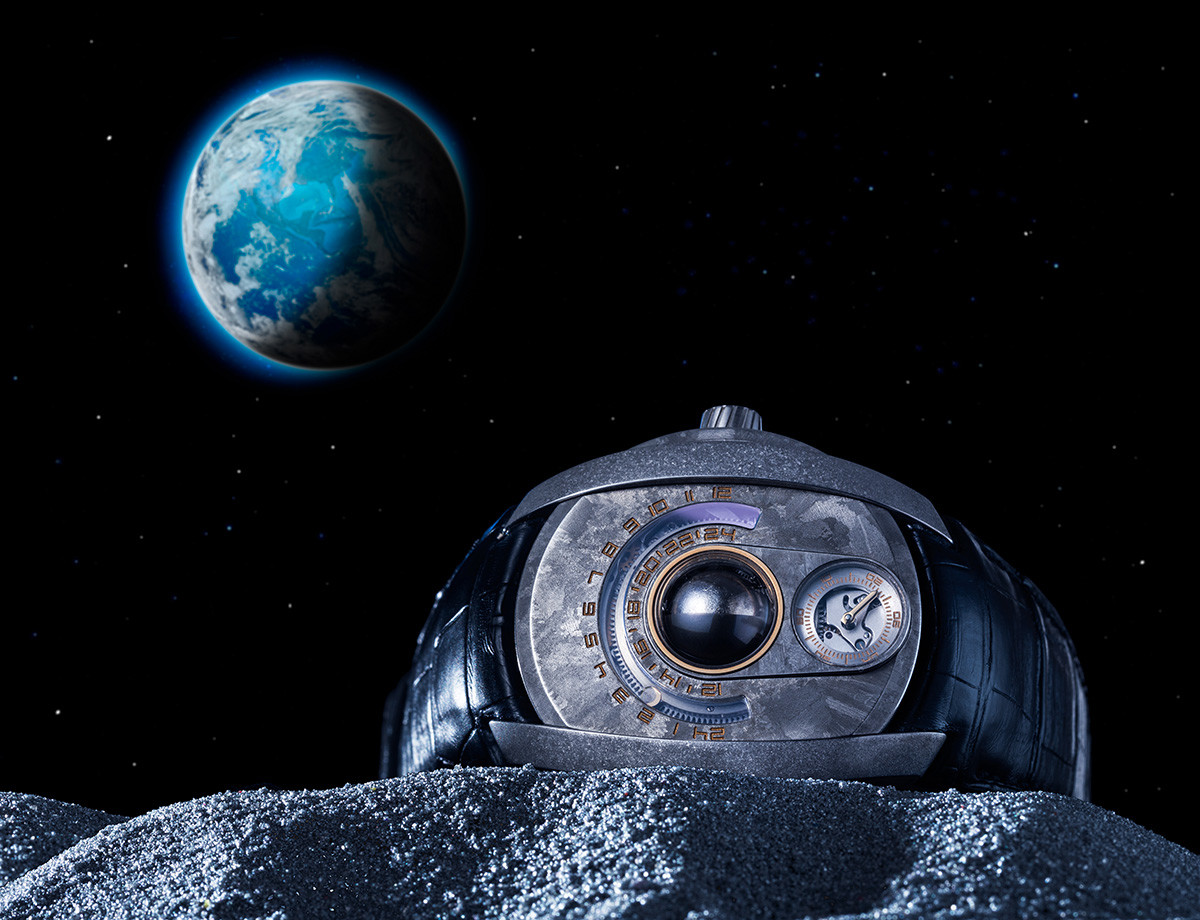 The factory's most popular and internationally best-known series is the Wristmons, wristwatches with “anthropomorphic” time indication. It began in 2017 with the already legendary Joker watch, which has been awarded all possible prizes and which accounts for the lion's share of the factory's orders to this day. 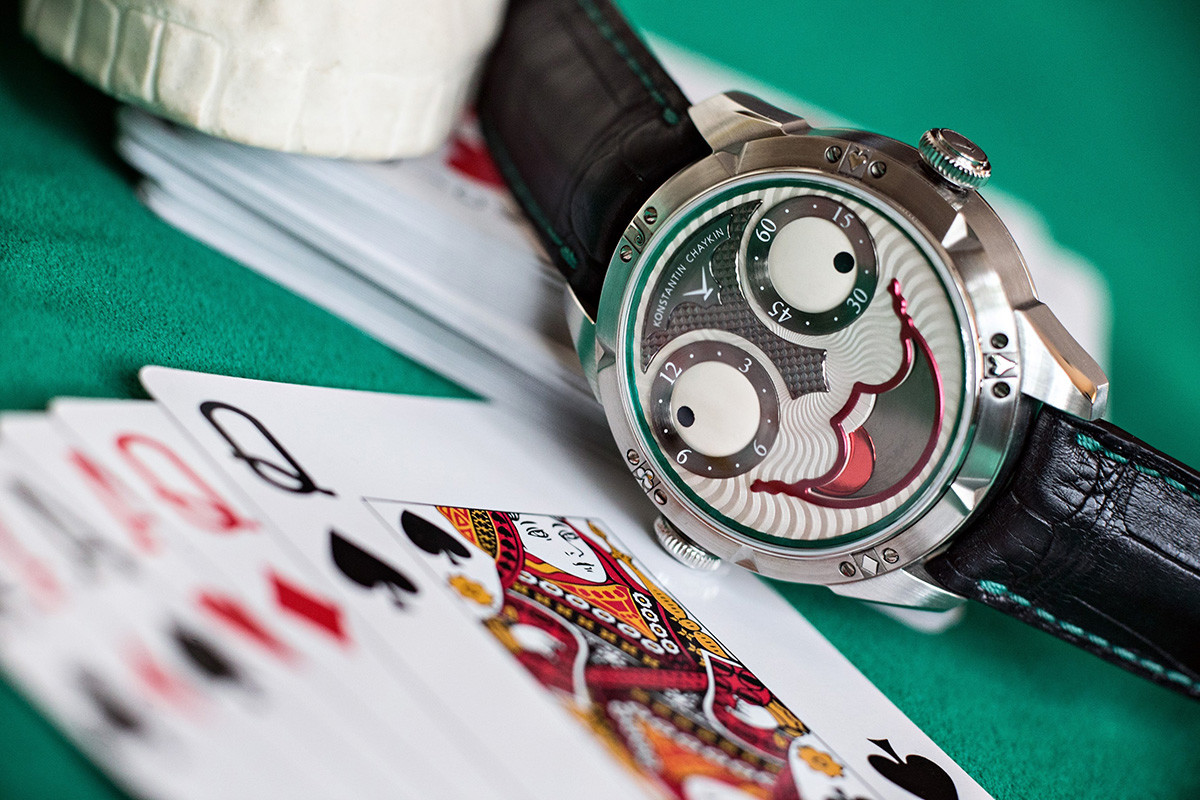 The dial of the watch depicts the joker's face with his characteristic grin (here it is used to indicate phases of the moon), while the hands take the form of the pupils of the joker's eyes, moving in two ‘eye sockets’ made of steel and enamel. Thus the "expression" of the face-dial is constantly changing – creating up to "20,000 different grimaces'', Konstantin says. 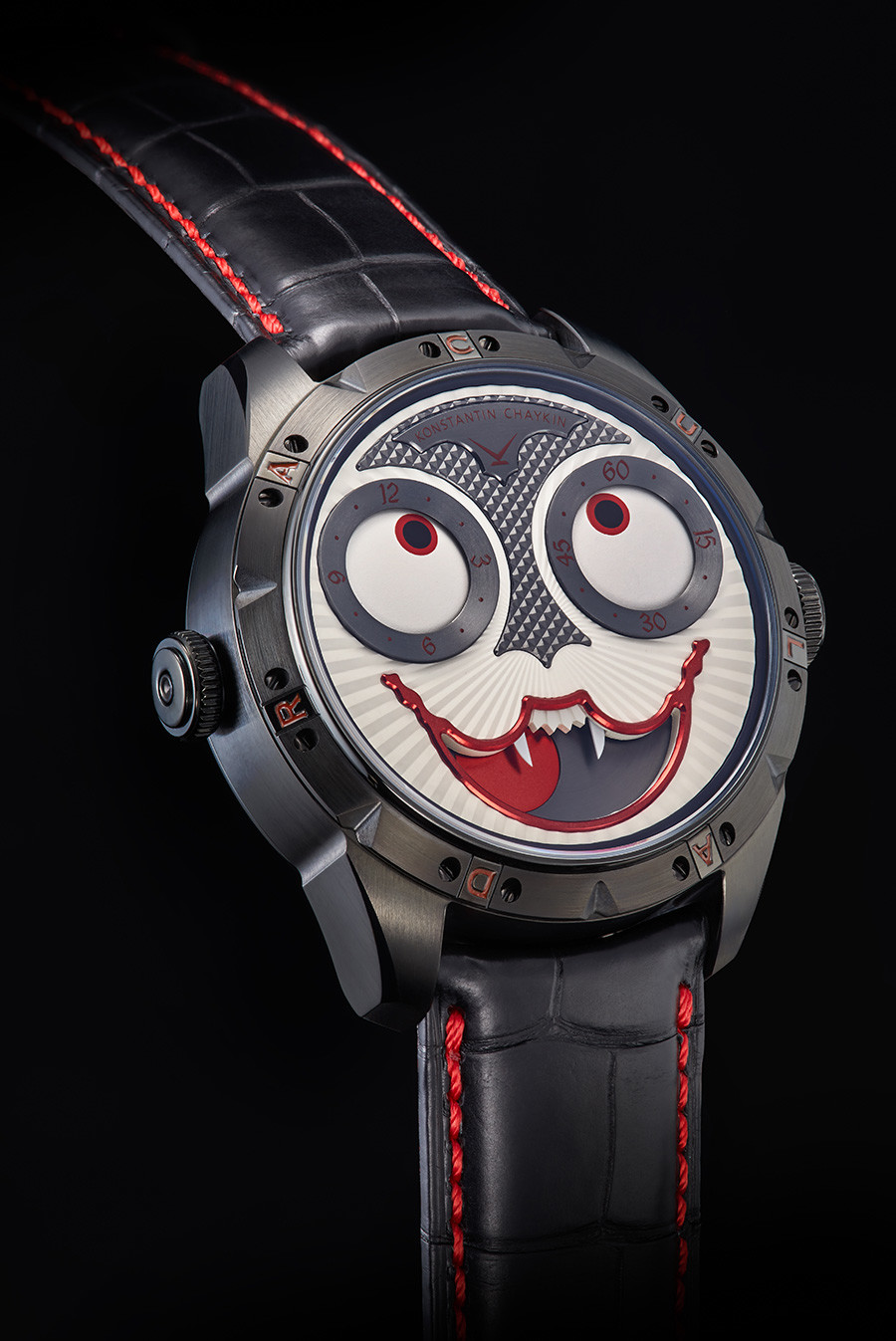 Another area for Chaykin's technical experiments are table clocks. For example, his Moscow Computus clock has been listed in the Russian Book of Records as the most complex clock ever produced in the country: it consists of 2,506 parts performing 27 different functions. 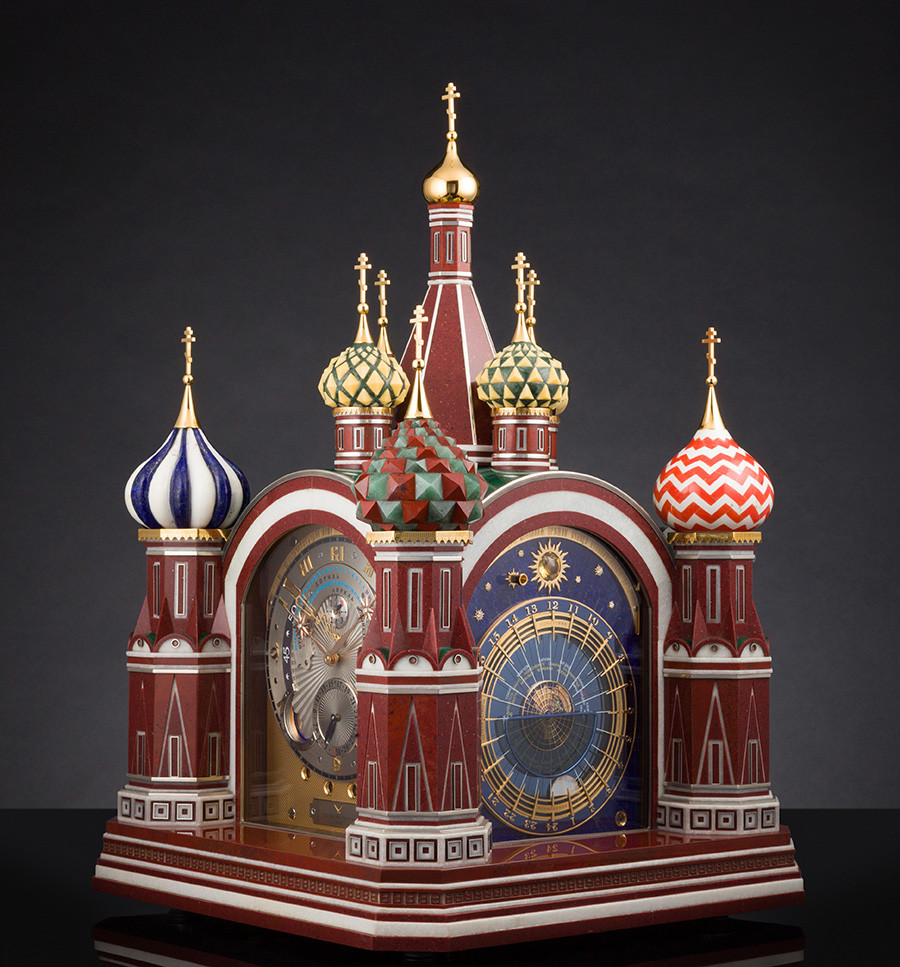 “Once I decided to solve an unconventional task that no-one had tackled before - to make a clock that would count down to and show the date of Orthodox Easter (which, as you know, is a movable feast),” this is how it all began,” he says. “One of the first models in this series was made as a gift for the Patriarch." It was this ultra-complex and revolutionary mechanism, which was presented at an international exhibition in Basel in 2007, that ushered Chaykin into the elite of global watchmaking.

Konstantin invents all his models himself. They are then brought to life by his staff (just two dozen people). They are all trained by the factory since Russia does not have a school of watchmaking as such. The factory's annual production capacity is about 150 timepieces (this year, they hope to make 200 pieces to make up for the downtime caused by the pandemic). Prices start at $10,000. Each timepiece is made by hand, with every single part given the most thorough attention under the watchmaker's personal control.

“A watchmaker is an occupation that combines up to 20 different professions,” Chaykin says. “It is super difficult. That is why it is just us in Russia so far. Of course, there are some large factories, both those left from Soviet times or revived. But there is so far only one watch manufactory producing unique expensive high-end mechanical timepieces. Incidentally, in terms of revenue, we outperform any factory."

Speaking about the future of wristwatches, Chaykin, a lifelong sci-fi fan, predicts that high-end mechanical timepieces of the like created by his factory will end up in museums. While humans will be getting their time from chip-based bioprostheses implanted into their wrists or eyes.