What it’s like to attend EURO 2020 in St. Petersburg (PHOTOS) 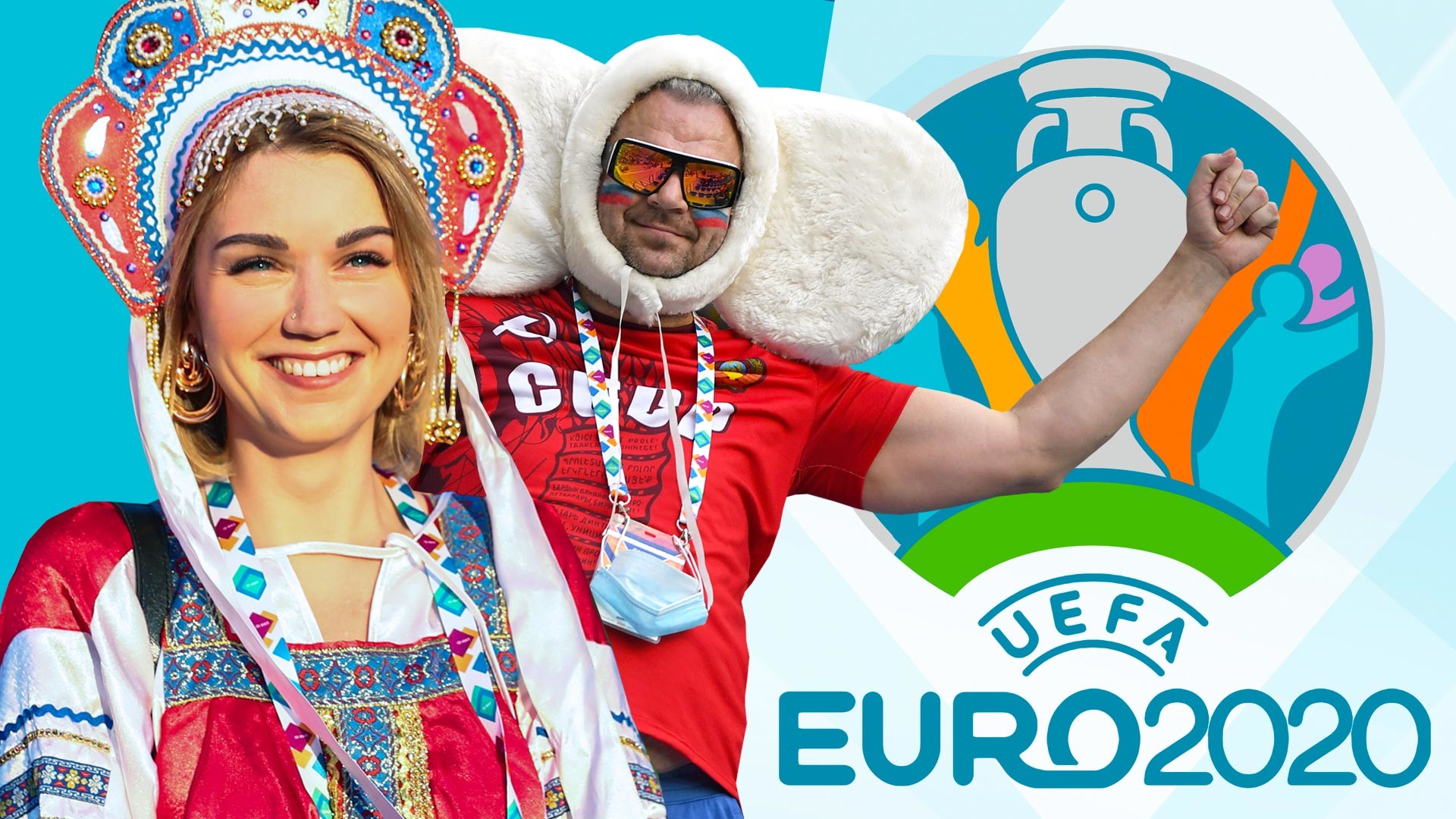 Kira Lisitskaya (Photo: Peter Kovalev/TASS; Kirill Kudryavtsev/Pool/Getty Images; Legion media)
Half-empty cafes with special Euro menus, Lionel Messi’s statue by the Hermitage Museum and scores of drunk football fans trying to argue with foreigners are just some of the things you’ll catch during Euro 2020, which has been moved to summer 2021.

A crowd of several hundred Russian tourists has gathered at the small colonnade of St. Isaac’s Cathedral. A part of them is trying to get the perfect photo with the city in the background, others are awaiting their turn to enter the colonnade and another portion is lining up to come down.

Suddenly, the annoyingly loud sound of a vuvuzela pierces the crowd, which begins to part, as a large man with a Russian flag over his neck barges through, shoving people around. He looks like a sort of Obelix-like chap who’s had one too many beers. A few kegs too many, to be fair. 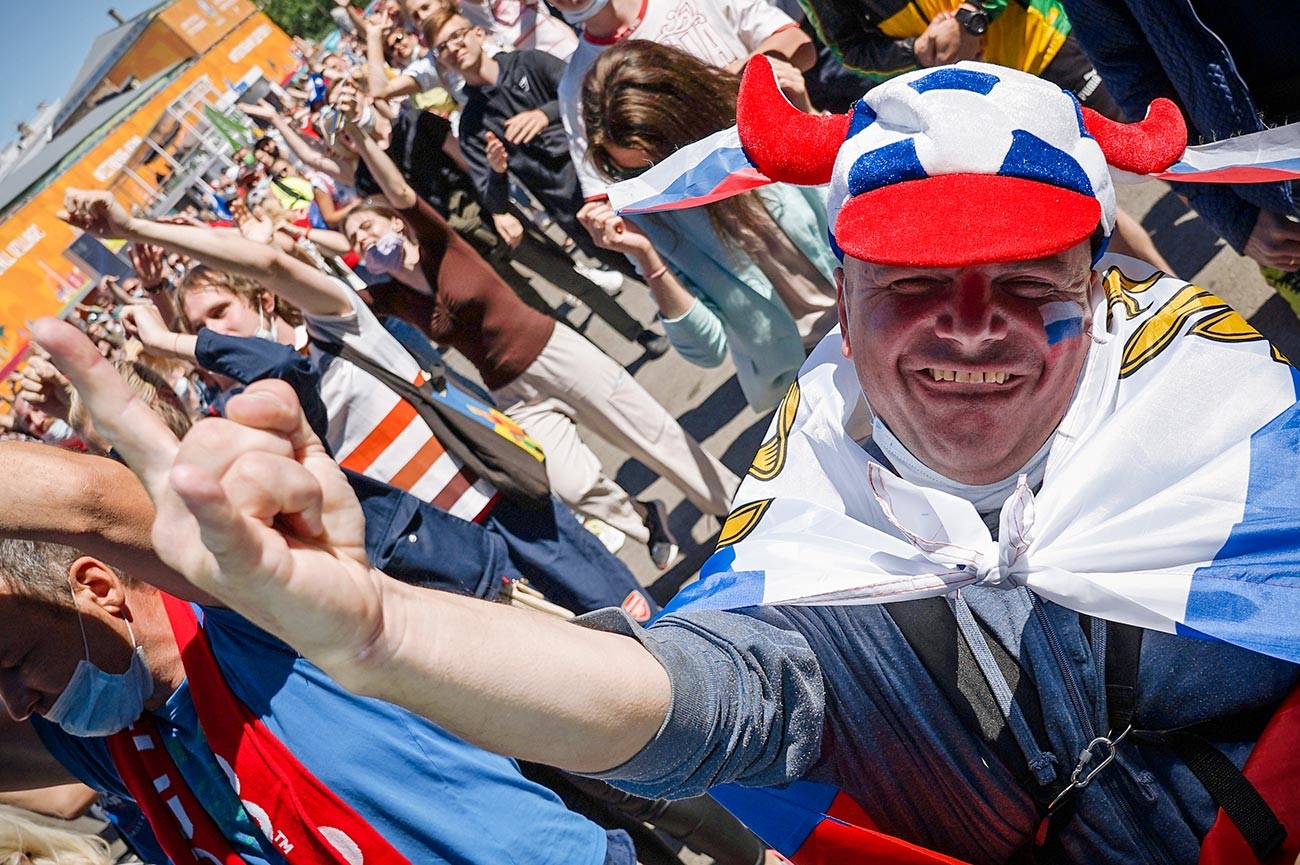 Fans during the broadcast of the match of the 2nd round of the group stage of the European Football Championship 2020 between the national teams of Finland and Russia in the UEFA Euro 2020 football village in St. Petersburg

“Are you aware that Russia is playing Belgium soon? We’re getting ready, the game is coming, gathering our strength!” he tells the first woman in his sight. “Yes, we’re aware, now let me take my photo!” she protests, while trying to take a selfie with the St. Petersburg skyline in the background. “You don’t understand anything! Ros-see-ya! Ros-see-ya!” he retorts and continues on his journey to find more tourists to bother.

Such scenes could be witnessed on June 12, on Russia Day, which coincided with the country’s first game at Euro 2020.

St. Petersburg was full of football symbolism on that day. Euro 2020 stickers were plastered all across town; on buses, in storefronts, sports bars and cafes. The downtown area came alive with signs pointing to fan zones, where visitors could watch the game on big screens, play children’s football and get their picture taken.

Not too far from the Hermitage Museum, near the Museum of Wax Figures, a statue of Lionel Messi was set up, with visiting Russians calling it “dwarf-like”. The city was ready to co-host the tournament, except for one detail: a catastrophic lack of fans. The one I mentioned earlier was a rare breed on that day. 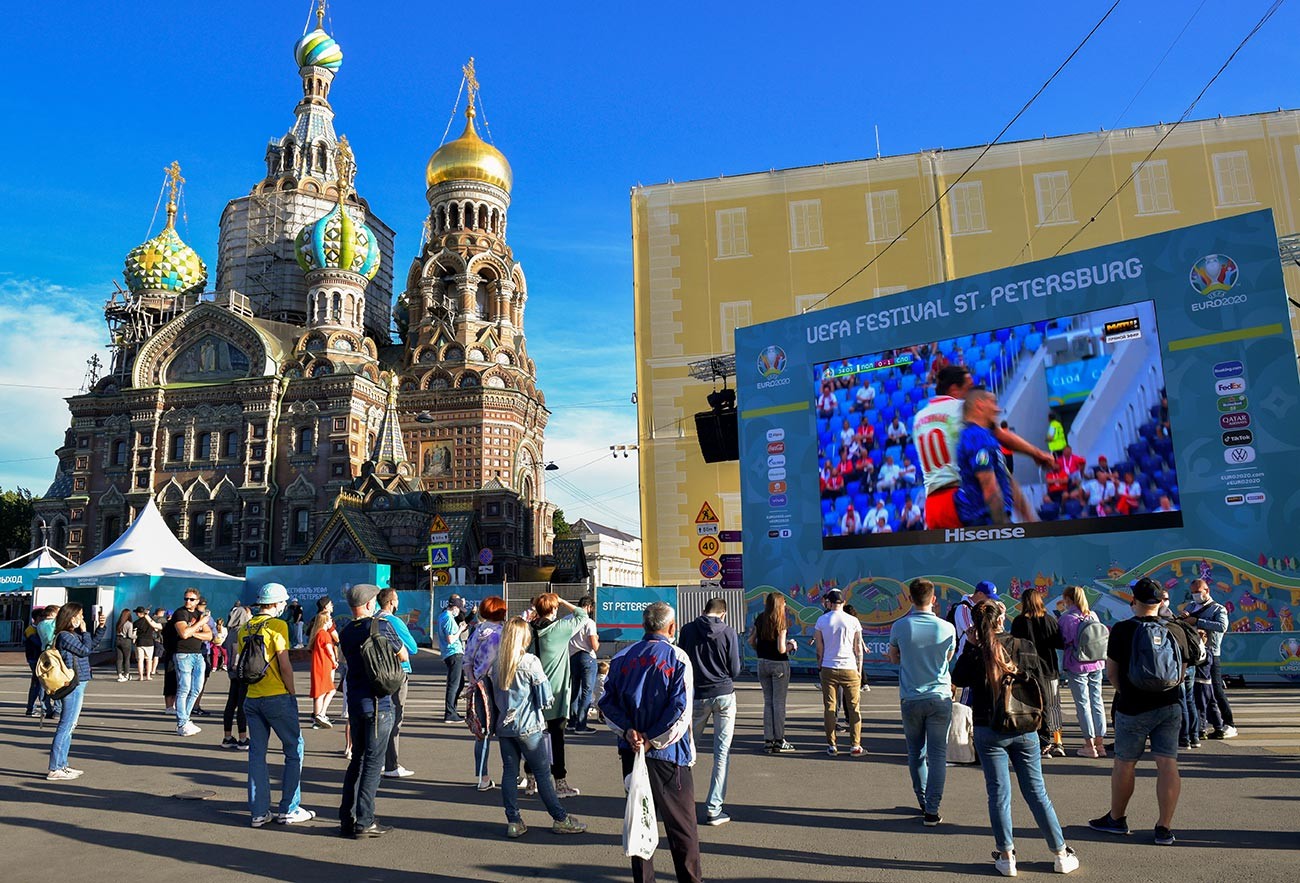 The screen with the broadcast of the Poland - Slovakia match in the fan zone in St. Petersburg

And it wasn’t for a lack of tourists - there were plenty, just not the football kind. Many had come to St. Petersburg to take walks and enjoy the long weekend on Russia Day.

A lot of cafes across town formulated their own “football menus”, which, for the most part, consisted of massive burgers, shawarmas, pancakes and classical borsch. But, even on game day, a lot of cafes were half-empty. According to a waiter at one of the ‘Korzhov’ bakeries, not many were even interested in the football menu: people mainly preferred to order the standard aperols and wine and opted for cafes with outside seating. Many locals went so far as to leave town altogether.

“I try not to show up on Nevsky Prospekt and the surrounding area, when the borders were open, it wasn’t so bad. But now, the majority of the tourists come to St. Petersburg. This football has everyone going crazy,” says Artur Morozov, a local. 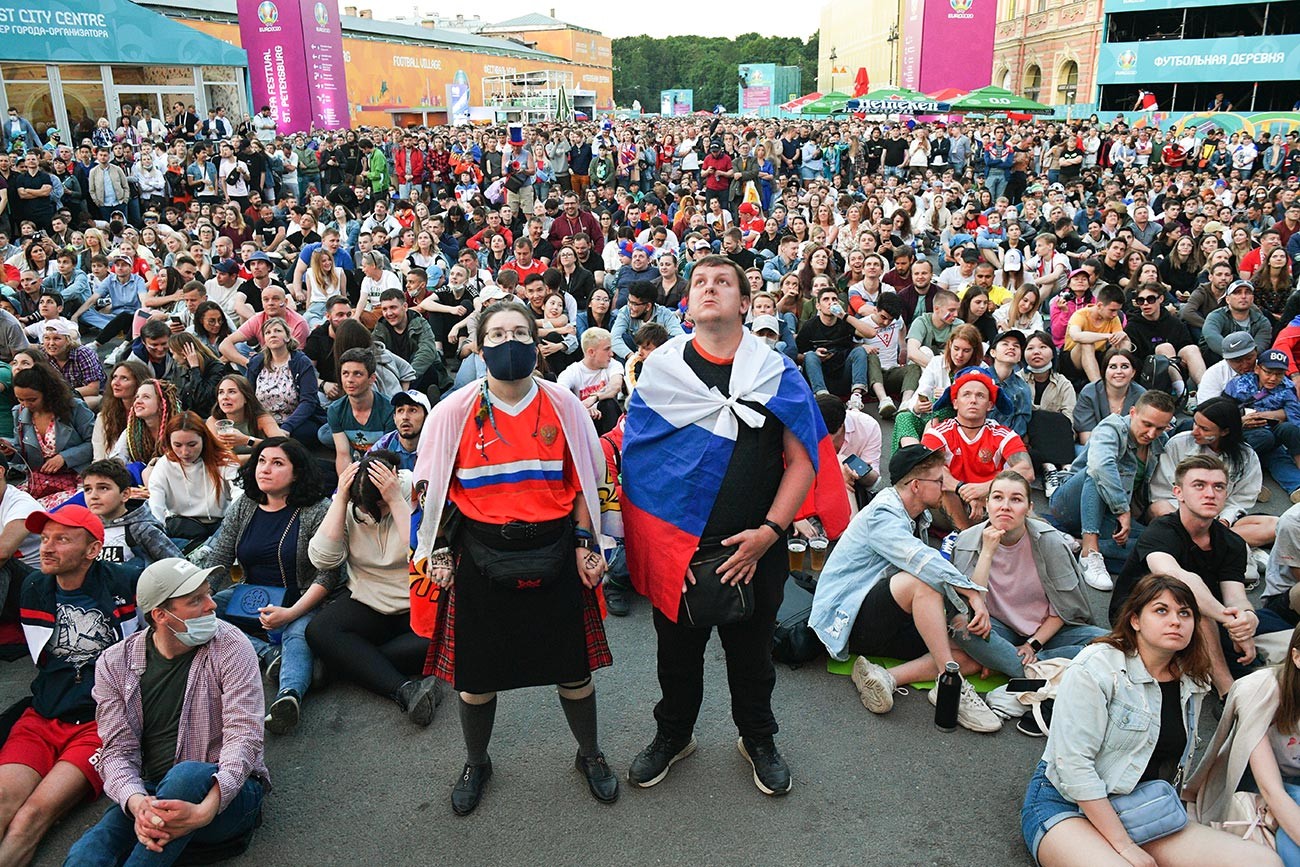 Fans watch the broadcast of the match of the 1st round of the group stage of the European Football Championship 2020 between the national teams of Belgium and Russia in the UEFA Euro 2020 football village in St. Petersburg

One of the main fan zones is situated on Konyushennaya Square near the Cathedral of the Resurrection of Christ. Tired volunteers chanted monotonously into the megaphones about free entry into the fan zone, but the crowds wouldn’t listen, creating congestion on a nearby street instead of using the proper entrance.

About 100 meters from there, stalls were set up with football shawls and Putin fridge magnets. According to one of the sellers, there wasn’t too much demand for football-themed souvenirs. And she hasn’t seen a great many foreign tourists around, only on a few occasions.

Meanwhile, St. Petersburg vice-governor Boris Piotrovsky announced that every match in the Northern Capital should expect up to 10,000 foreign attendees. I reported earlier on how Russia even set up visa-free entry for just such a category (all you need is a FAN ID). However, even I didn’t see that many foreigners; I had to search for their photos on Instagram, using their geotags. Most were registered by the stadium. 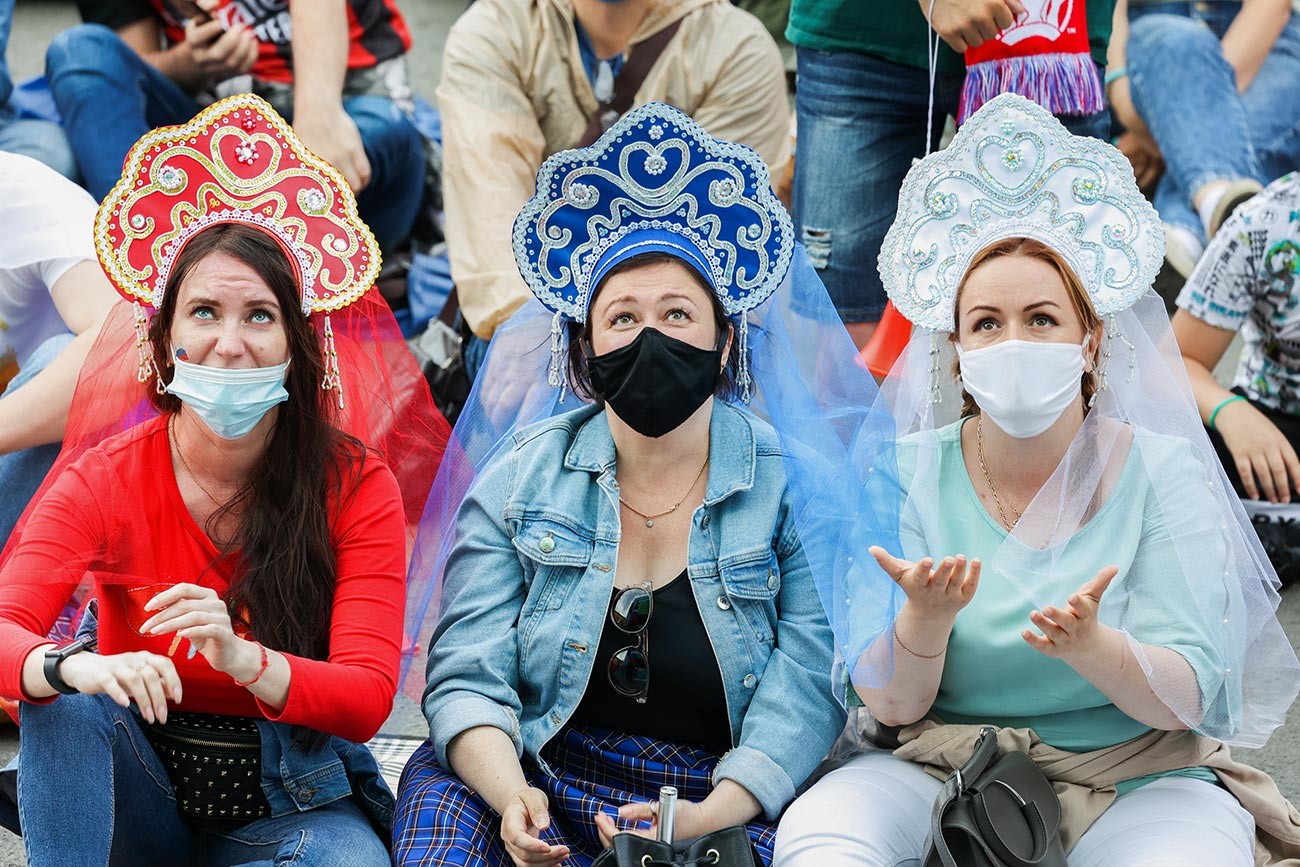 Pawel from Poland came for the Poland-Slovakia game. He arrived from Kaliningrad on June 11, having made the journey from Poland by car.

“The organisation was ok, but the security control at the entrance to the stadium was really thorough. Mostly we didn’t have any problems with Russian people, but one time in the fan zone, some guys started arguing with us when they spilled some beer <...> Mostly we liked your restaurants, the atmosphere of the city - I mean monuments, streets architecture, rivers, etc. Of course, I like Russian girls. <...> We didn’t like that people here either don’t want to speak or don’t speak English at all, even in restaurants or pubs,” Pawel responded when asked about his first impressions.

Olaf, another Pole, made it here by plane, then left the day after the Poland-Slovakia game.

“Organisation of matches is very good, I can’t complain about anything, actually. The Russians were really nice. We saw Petropavlovsk Fortress and Saint Isaac’s Cathedral. On this day, we tried to enter the Hermitage Museum, but there was a big line. Unfortunately, buying online tickets via the Hermitage website didn’t work. In fact, it was the trouble in this city - a lot of lines,” he said. 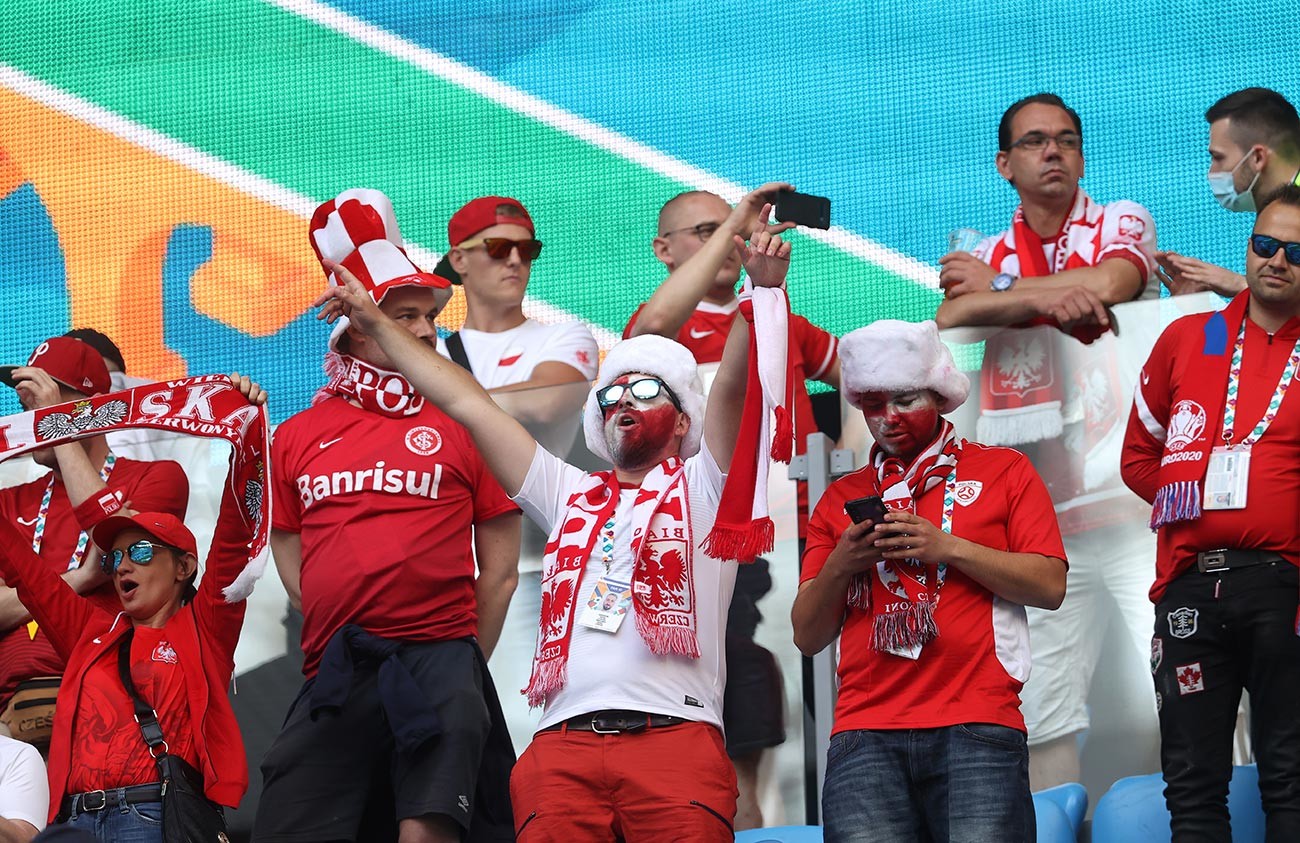 Fans of Poland show their support prior to the UEFA Euro 2020 Championship Group E match between Poland and Slovakia at the Saint Petersburg Stadium on June 14, 2021 in Saint Petersburg, Russia

“And who are these fellows, do I know them?” an elderly woman asked a fan. “Yeah, they’re great pastry chefs, they make really nice Belgian waffles,” he joked back.

“I prayed to the gods that I won’t get any calls for the stadium - you end up stuck for half the night!” exclaimed my taxi driver. An hour before the game, fans made their way in droves on through Primorsky Park toward the stadium, with the fan zones finally beginning to fill. However, their max capacity was only reached on June 16, ahead of the Russia-Finland match.

Those that didn’t make it into the fan zones that day ended up watching the game in sport bars across town. One of the bar chains I found myself in was all booked up several hours before the game. Beer was served in large bowls resembling football balls and, if you managed to guess the score correctly, you received 3.5 liters and some snacks to go with it. 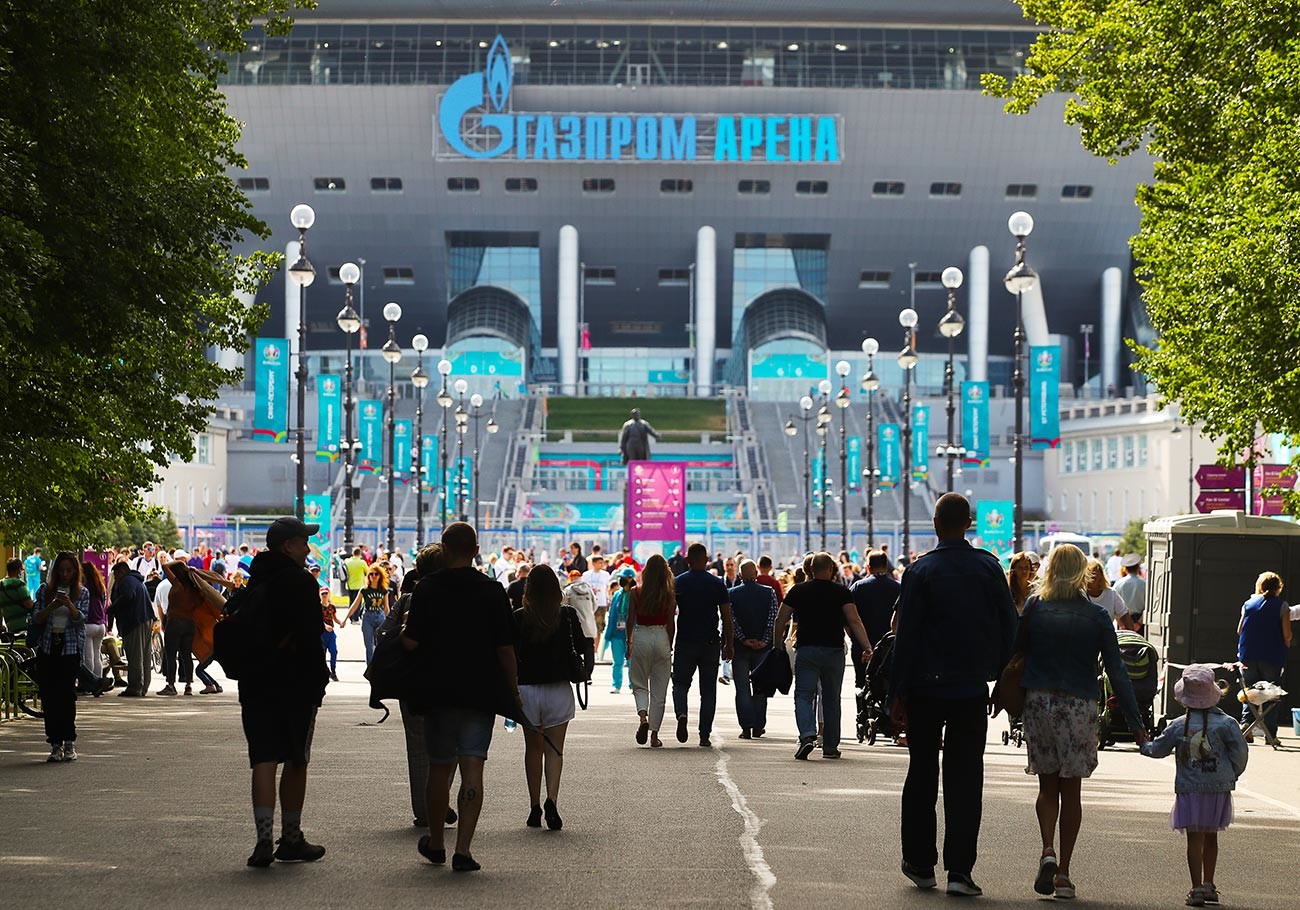 Fans at the Gazprom Arena stadium before the start of the European Football Championship match: Poland - Slovakia

“I’m trying to keep a sober outlook on things, so I went with 3:1 for Belgium - we can at least manage a single goal, can’t we?” Vladimir, who was there with his girlfriend, shared his prediction. For the next couple of hours, he was the loudest of all to curse the Russian team whenever it missed the ball. 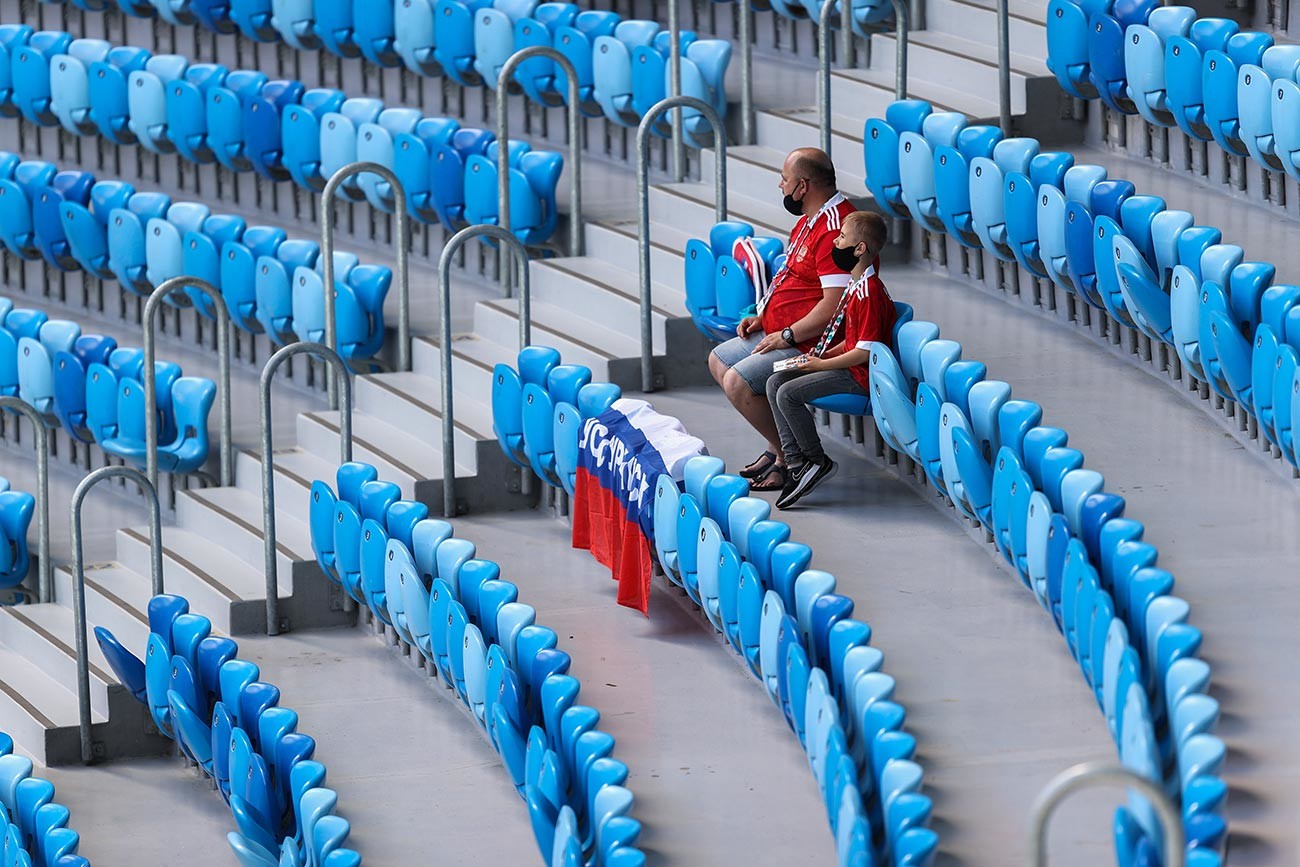 Russia fans wearing face coverings wait in their seats prior to the UEFA Euro 2020 Championship Group B match between Finland and Russia at Saint Petersburg Stadium on June 16, 2021 in Saint Petersburg, Russia

He and Katya finished two three-liter servings of beer. Some 10 minutes before the game’s end, he tearfully looked up at the screens, begging Russia to score at least one goal. By then, some of the tables had already been vacated, as disappointed fans were leaving the bar. The final result was 3:0 to Belgium. 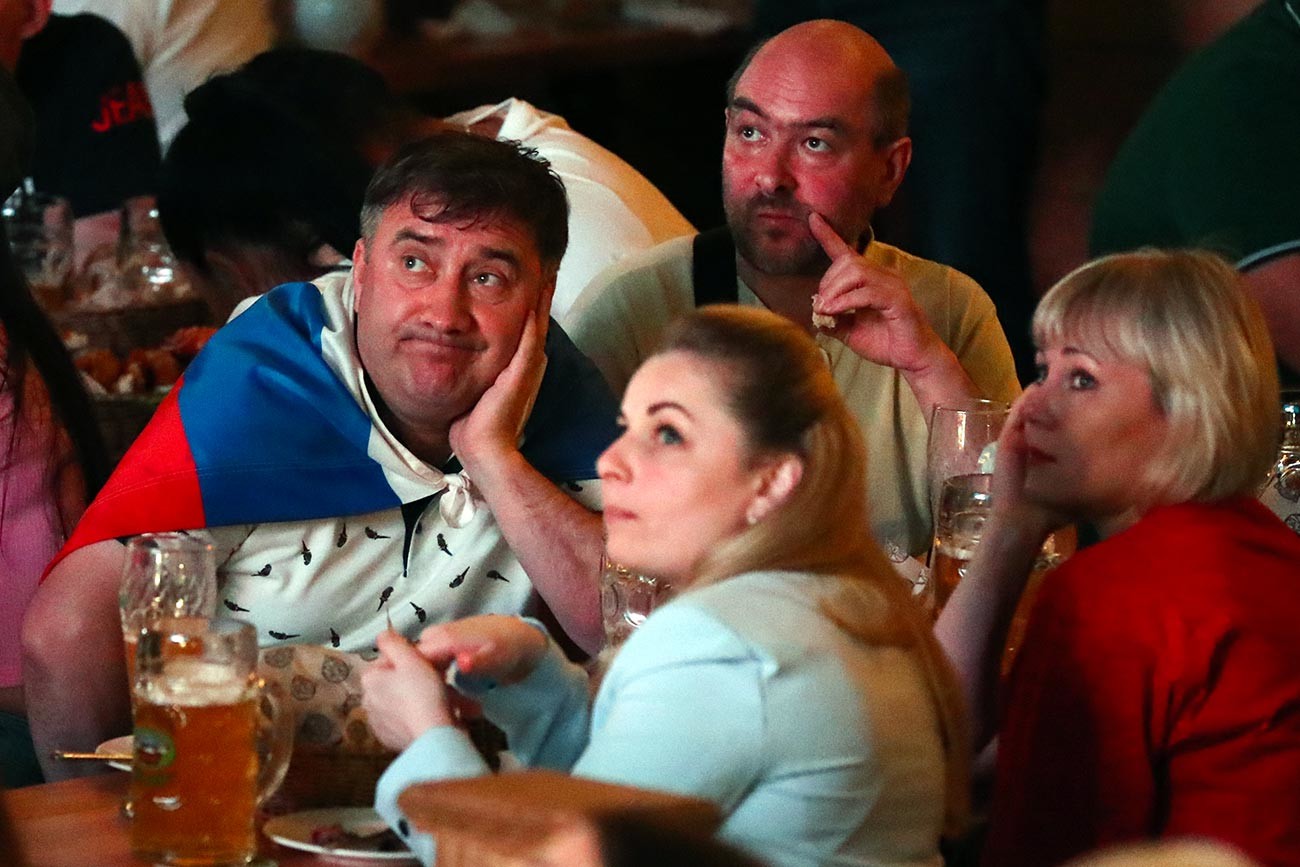 After the match, Vladimir was seen standing outside, with Katya finally getting a chance to smoke a cigarette after a tense match.

“So what are your plans now,” I asked. “Well, we didn’t win any beer, so we need to go get some more. The important thing is to not discuss football anymore,” Katya replied.