What has a Dutchman who’s moved to Russia learned from the locals? 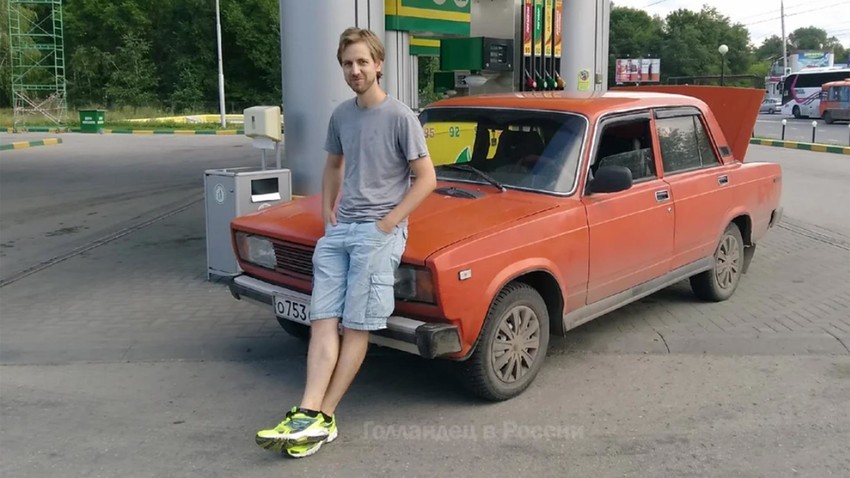 Machiel Sneep
Machiel first fell in love with the strange Russian soup made from salad with kvass (okroshka), then he stopped smiling to strangers and then he began to blog about how he was gradually becoming... Russian!

“Now, I’ll tell you which Russian words have Dutch origins: флот - vloot (navy), гавань - haven (harbor), матрос - matroos (sailor) and many others!” Thus begins a video posted by Machiel Sneep, a tall blond guy with a big smile. The 31-year-old is from Holland, but he has been living in Russia for more than five years now. In addition to his main job in marketing, Machiel runs a popular blog in Russian and a YouTube channel about what the two countries have in common and what sets them apart and about things he has learnt from Russians.

A Dutchman in Russia 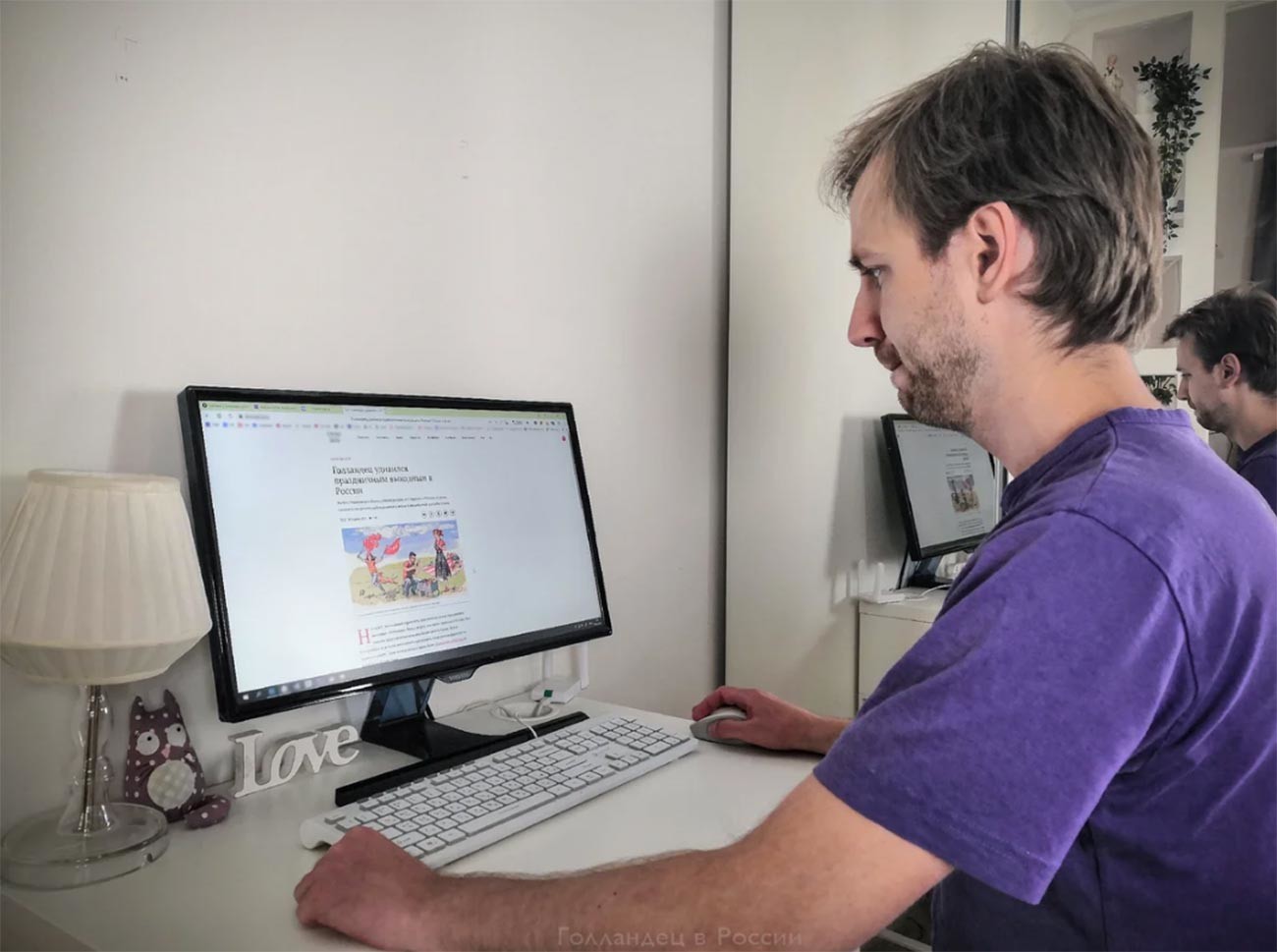 It was love that brought Machiel to Russia. “We met at the Eurovision Song Contest in Dusseldorf in 2011. Alya was there as a journalist and I worked for a Dutch company that sold all sorts of souvenirs there: T-shirts, scarves, mugs,” he recalls. “Then, she came to Holland to study for several months and we started dating.”

In 2015, having got married, they decided to move to Russia. “It was easier for me to move than for her,” Machiel explains. “To work as a journalist in the Netherlands, you need to know Dutch, so I thought that in marketing, it would be easier for me to find work.”

Machiel is currently working from home, for clients both in Russia and abroad. The idea to start a blog was suggested by his wife, also a journalist. She also helps him with difficulties that Machiel may have with some of the intricacies of the Russian language.

In his blog, Machiel often compares life in the two countries. For example, in Holland, children in kindergartens are given sandwiches and are not made to sleep after lunch; in Russia, anyone can call a doctor to get a medical examination at home and buy medicines at a pharmacy without any problems. Machiel and Alya choose topics for his blog posts together. “Then, I dictate the text to her and she types it on the computer." Machiel can type in Russian, but very slowly. “Five times slower than a Russian,” according to him.

The most difficult sound 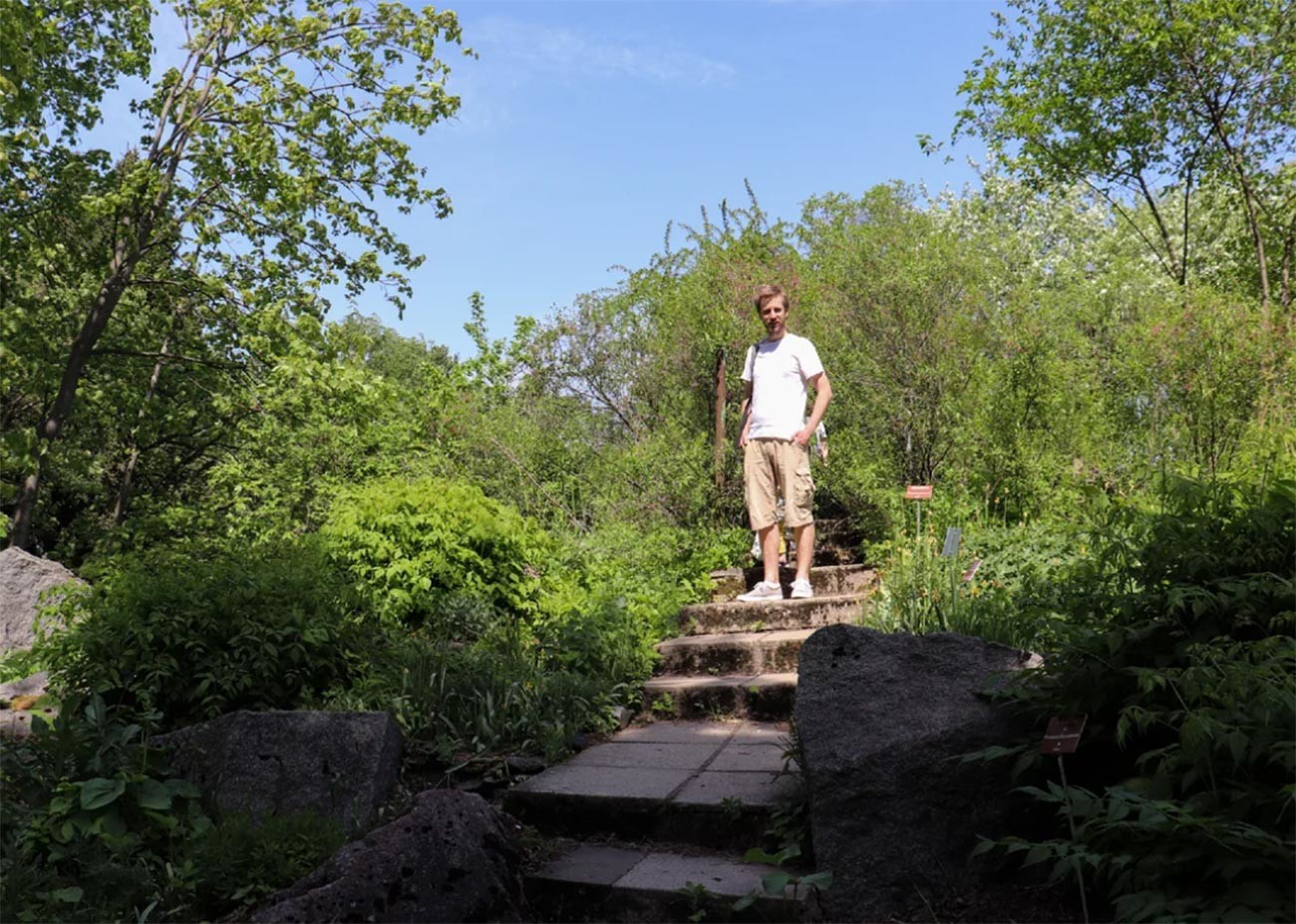 At the same time, Machiel speaks excellent Russian: He began to learn it back in the Netherlands, but he believes that the most effective way to master the language is to travel to small Russian towns.

“Unlike in Moscow or St. Petersburg, few people there speak English, so you will have no choice but to start speaking Russian. I even had to use sign language,” he recalls.

Like many other foreigners learning Russian, the sound that Machiel struggled with the most was the ‘ы’ sound. “At first, I could not even pronounce it and could not and did not see the difference between ‘ы’ and ‘и’,” says Machiel. “It still sounds very strange to me, as if a seal is trying to say privet (“Ы! Ы! Ы!”). The Dutch language also has sounds that are difficult for foreigners to pronounce - maybe that is why my wife is still not learning it.”

Machiel also has his reservations about Russian italics: “The letter ‘т’ looks like ‘м’, while ‘ш’ looks like ‘и’. “For me, a handwritten text in Russian is like a secret message or a prescription from a doctor,” he admits.

Their two children speak both Russian and Dutch. "I talk to them in Dutch and to Alya in Russian. Furthermore, sometimes Alya and I switch to English when we don’t want the children to understand what we are saying.” 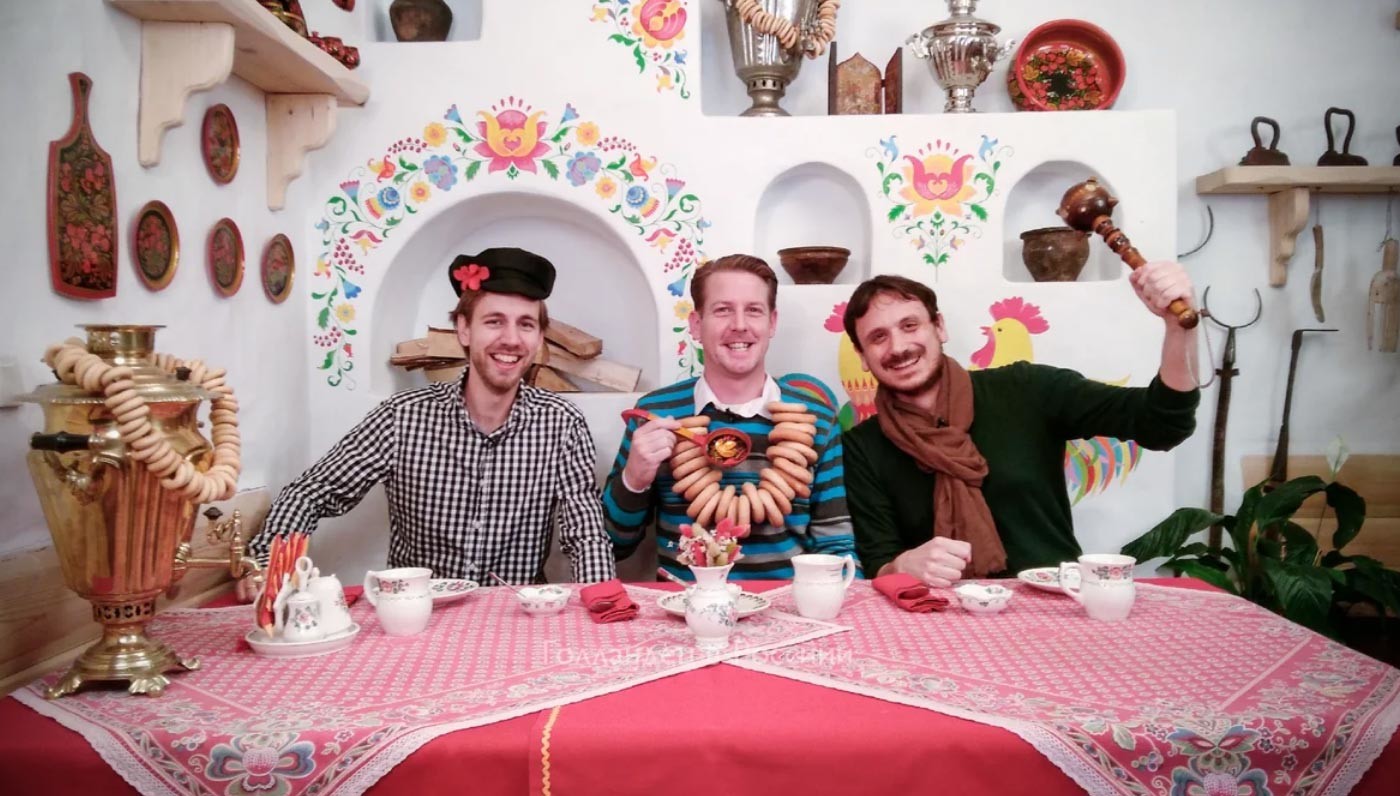 The cold soup made of salad with kvass is one of those Russian dishes that usually baffles foreigners. But not Machiel. “At first, I did not like the taste of kvass. At the very least I found it very strange. But then I decided to try kvass in okroshka – and it was delicious. But, still I don’t drink kvass on its own. And I don’t like okroshka with kefir, I find it too sour for my taste.”

In addition to this traditional Russian summer soup, Machiel has also developed a taste for tinned meat. “We don't eat it often, but it is tasty and quick to cook. We usually cook it with buckwheat.” He tried buckwheat for the first time back in Holland, when his future wife treated him to it when he came to visit her. “The buckwheat was too salty, but I ate it anyway. Next time it was better and I really liked it.”

What Machiel does not like are the majority of Russian cheeses. “I guess I haven't found my taste yet, but supermarket cheeses do not have a rich flavor or a pleasant cheesy smell,” he says.

No smiling to strangers 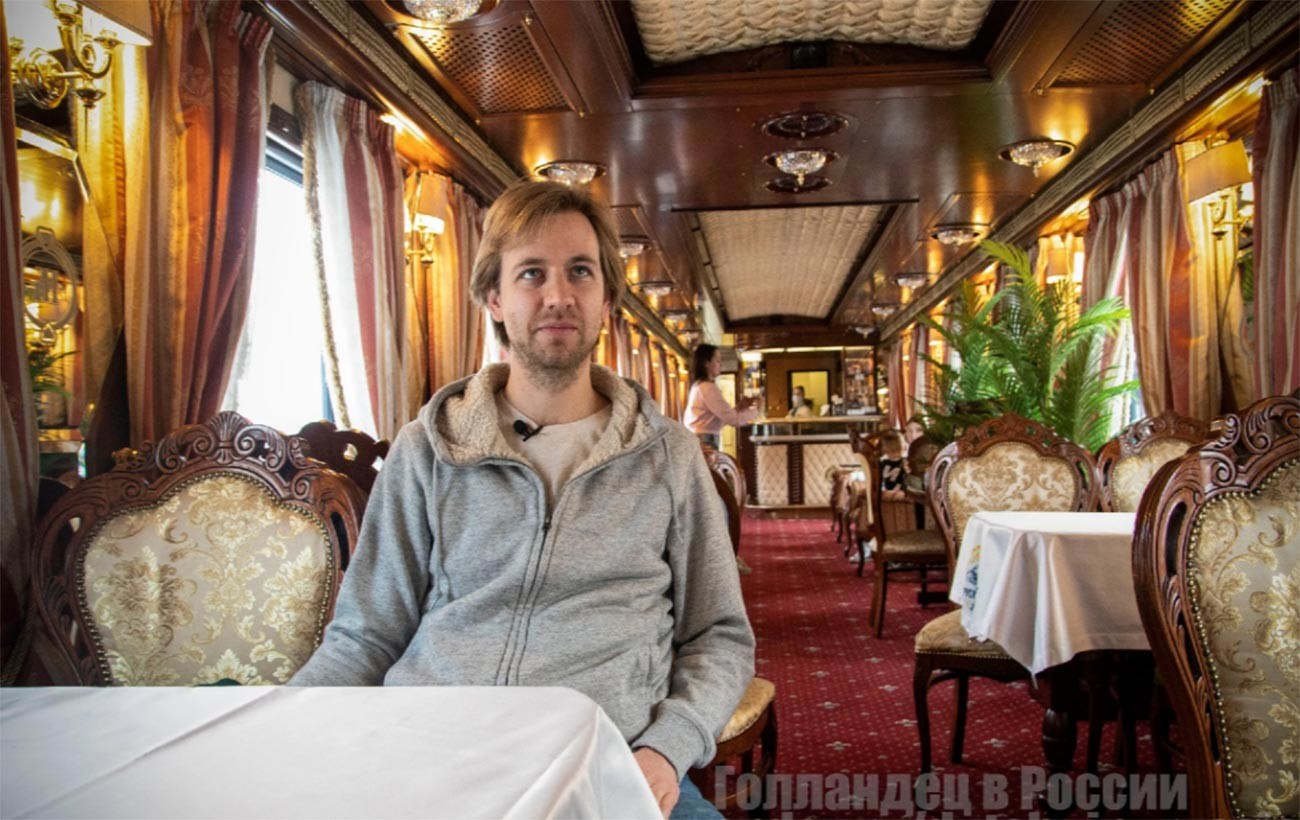 Living in a new country, Machiel has developed new habits, or rather, he has lost some of his old ones. “When I came to Russia, at first I thought: Why are Russians so sad? But then I realized: You smile only when you really feel like it. I have now become ‘Russified’, too: if you see me with a smile, it means it is sincere,” says Machiel. “Also, Russians are very hospitable. If they invite you over, they will not let you go without feeding you first.”

On Saturdays, Machiel has a day off, which he likes to spend on long walks around Moscow. “First, I go to play football, then I just walk the streets. I study the architecture, interesting parts of the city.” Machiel admits that they would like to travel more around the country, but, so far, they have not done it much. “We have visited St. Petersburg, several towns around Moscow, the Volga region and traveled to Karelia on the Ruskeala Express. It was a very interesting train and the park itself is beautiful. In the future, I want to go to Crimea, the Caucasus and Kamchatka!”