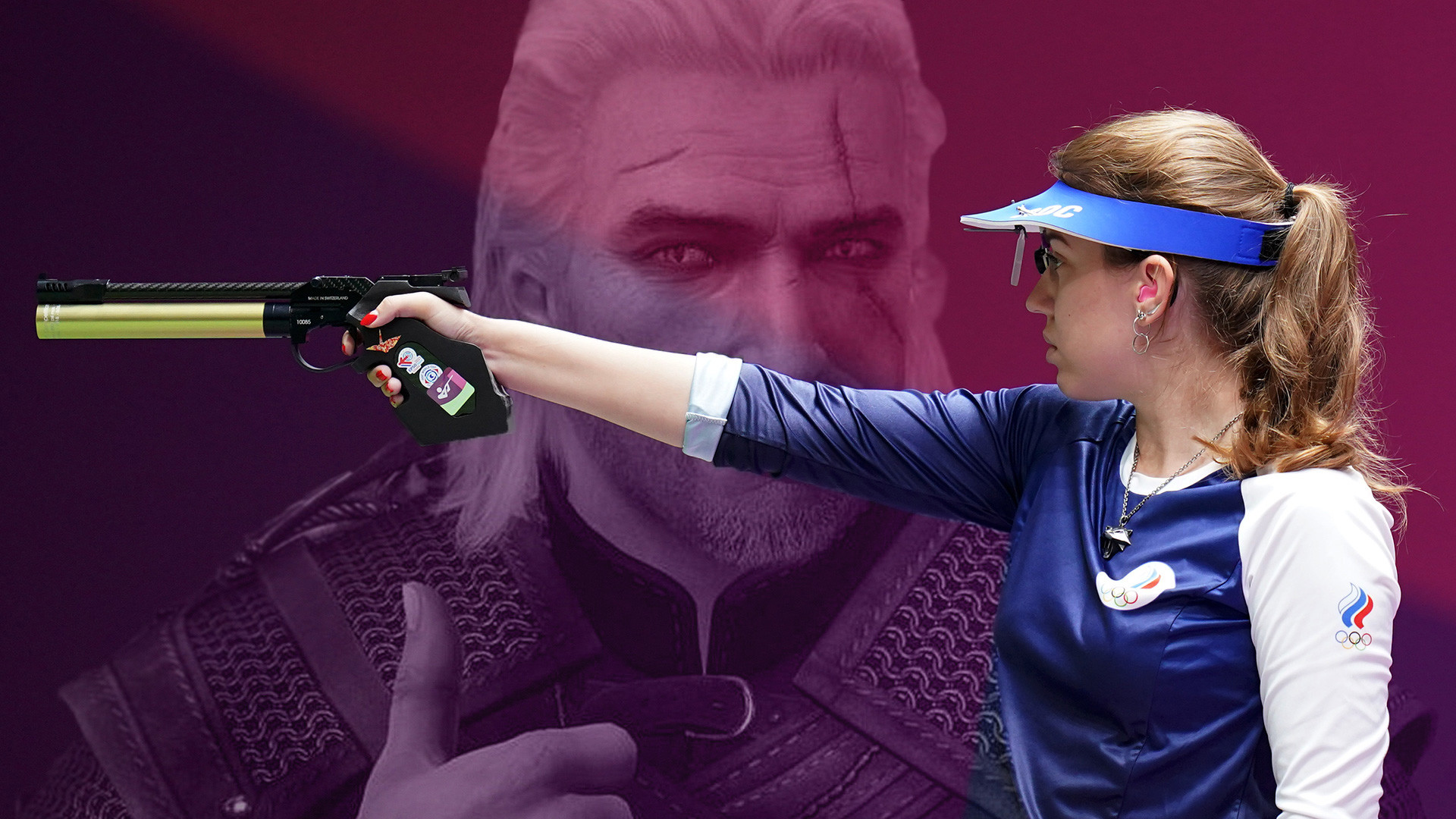 Russia Beyond (Photo: XinHua/Global Look Press; CD Projekt Red)
As a child, the two-time Olympic champion hunted ducks with an air rifle. Years later, she's winning medals, shooting literally with one hand in her pocket, and receiving congratulations from the developers of The Witcher games!

Dozens of people gathered outside the airport, all standing around a smiling young woman in a gray tracksuit, holding a bouquet of lilies. In front is a stage with a Russian folk chorus singing “Toss a Coin to Your Witcher”, which is one of the main themes from Netflix’s smash hit series -  The Witcher.

This is how 24-year-old Vitalina Batsarashkina was greeted on August 3, 2021 in her hometown of Omsk (2,200 km from Moscow). At the 2020 Olympics, which was postponed to 2021 because of the spread of Covid-19, she won three medals in pistol shooting - two gold and one silver.

At all of this year's competitions, she wore a cat school medallion from the universe of Polish writer Andrzej Sapkowski and The Witcher game series.

"I think it [the amulet] helped me relax and distract myself - that's the most important thing. I'm not going to change [the Witcher School]; I love cats," Vitalina told TASS.

Her accessory was noticed by CD Projekt Red, the developer of The Witcher games, which publicly congratulated Vitalina on her victory on Twitter.

We hope that your witcher medallion will bring you luck during Thursday's 25m Precision competition too!

Hunting in childhood and first competitions

The young "witch" fell in love with victories and weapons when she was a child.

Vitalina was born in Omsk on October 1, 1996. Her father is a professional kickboxer and both grandfathers are hunters. Since early childhood, she was playing ‘Cops and Robbers’ with the local boys. She first picked up a gun at age six, and almost immediately began going hunting with her grandfather.

"It was my grandfather's gun - a 12-gauge. What could I do then? Only take a picture with it. And when I sat in the boat with my grandfather on the hunt, he would shoot and I would plug my ears," Vitalina recalled. 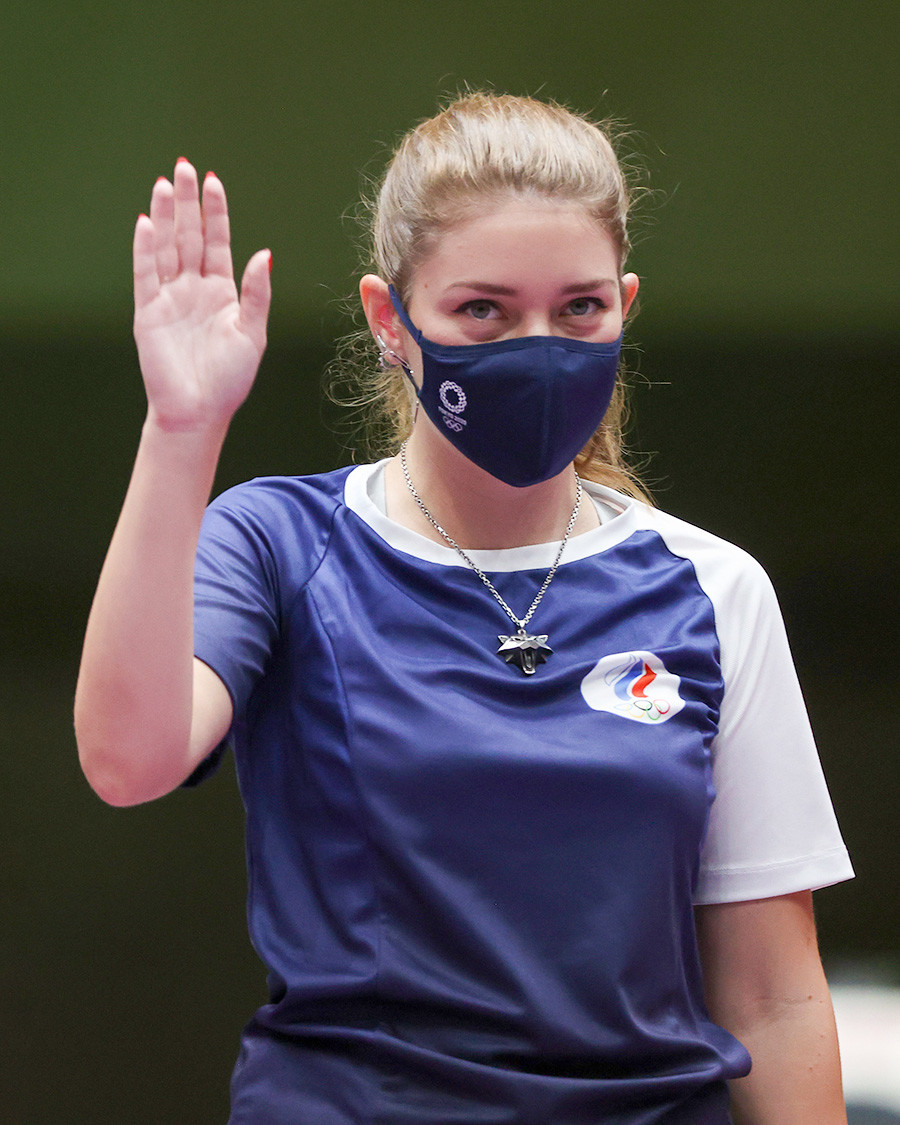 Then the parents took Vitalinato karate and badminton classes, but she did not take a liking to these sports, and at age 12, they enrolled her in shooting. According to her coach, Natalya Kudrina, Vitalina immediately proved to be a "frisky, daredevil child."

"She just really liked shooting and then painting over the bullet holes," the trainer said about the champion.

At the same age, Vitalina got an air rifle from her parents as a gift for International Women’s day. Vitalina and her friends started shooting at targets behind garages, and then she began hunting ducks with her grandfather. At some point, she started beating him with the number of birds killed. 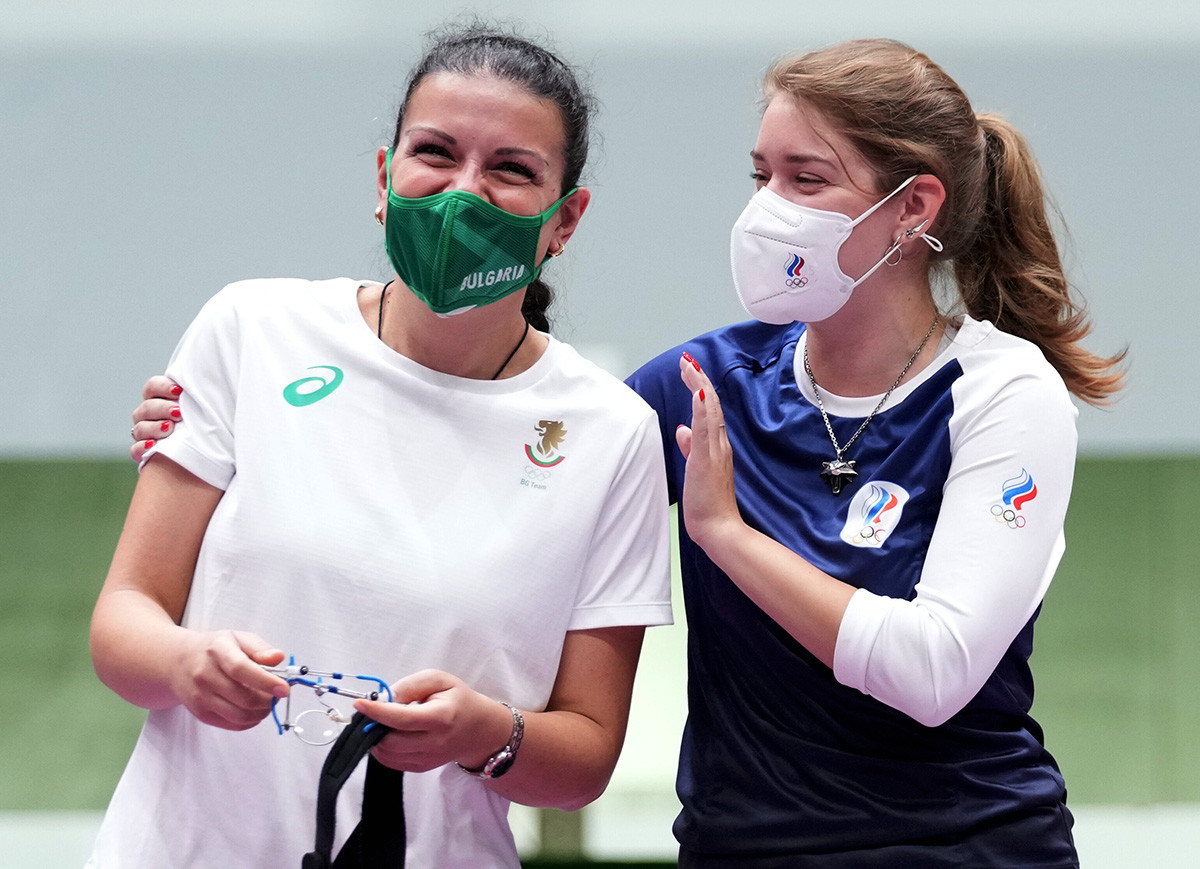 In her first team event, Batsarashkina won a bronze medal.

"My coach told me to watch the other girls shoot, and then I tried it myself. Next, she sat on the podium next to my mom and said: ‘Now, it's time to face my shame.’ Natalya Ivanovna sat blushing, but I didn't miss a single shot... Then the coach came up to me and said: ’Now we'll learn to shoot properly,’" Vitalina said about her first victory. It was then, according to the coach, that she developed a true taste for competition.

First love, a fascination with The Witcher, and the Rio Olympics

In 2014, at the age of 18, Vitalina won a bronze medal at the European Junior Championships in 10-meter air pistol shooting. That same year she met Ivan Ilinykh, a Russian junior athlete from Orenburg. A year later he finished his career, but they are still dating.

In 2015, Vitalina won first place at the Junior World Cup and then she first became interested in ‘The Witcher’ video game. 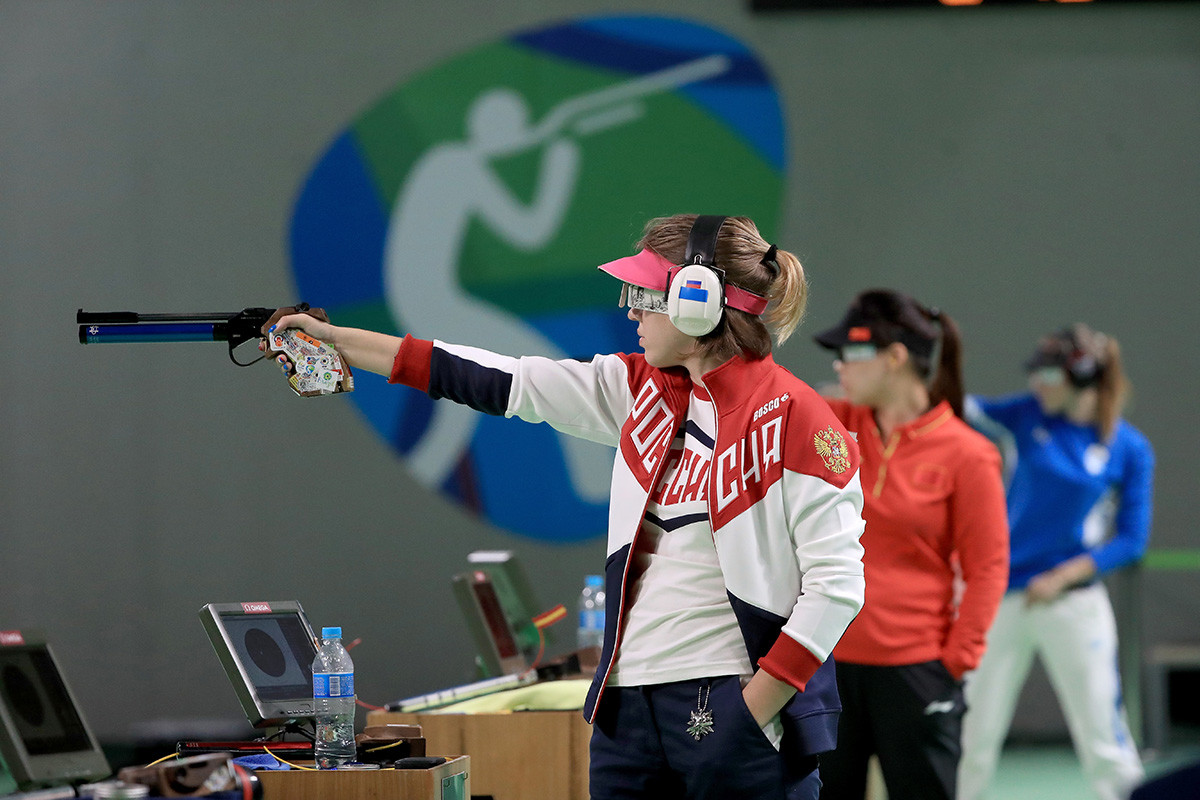 Vitalina Batsarashkina of Russia competes dduring the the Women's 10m Air Pistol event during the shooting competition on Day 2 of the Rio 2016 Olympic Games at the Olympic Shooting Centre on August 7, 2016 in Rio de Janeiro, Brazil

"I bought a console, a little later the game. I really liked it. By then I was aware that there were books, so I decided to read them... [The protagonist] Geralt is awesome. Although there are a lot of moments in the book that make you doubt it, "says the athlete about her favorite fantasy universe.

In 2016, Vitalina participated in the Olympics in Rio de Janeiro. Before the competition Vitalina beat the game together with a friend, who was just watching her play to follow the main plot.

At the competition Vitalina attached a sticker to her glasses with a trademark symbol of the Witch School of the Wolf from The Witcher. Then she won a silver medal in air pistol shooting from a distance of 10 meters in the mixed team competition and received a medallion from the cat school as a gift. 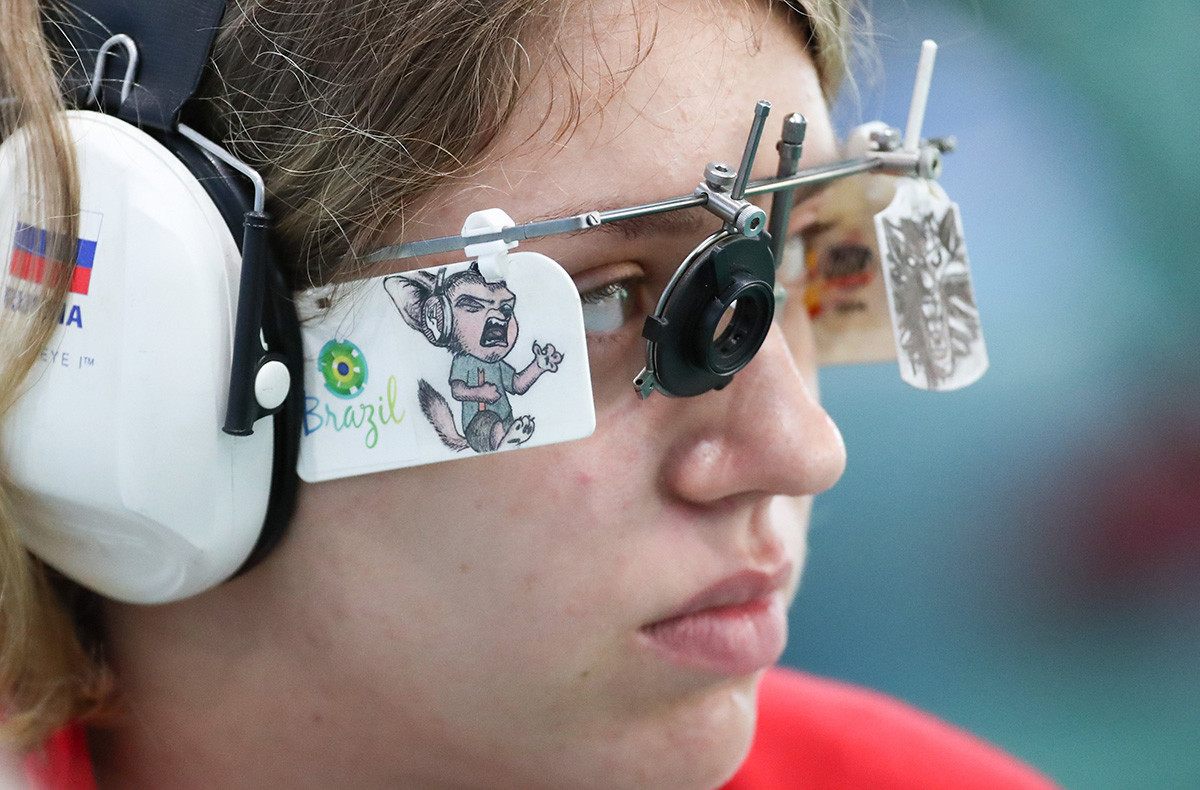 "There was excitement, although I didn't show it in any way. There were a lot of thoughts in my head, but I tried to ward them off, tune in for each shot... To be honest, in Rio, I didn't fully understand that I had won a medal. It's a very mixed feeling! ...I'm going to keep shooting until the end. Until they kick me out (laughs),” Vitalina shared her impressions of her first Olympic medal.

In 2018, Vitalina won a gold medal at the world championships in mixed team events.

However, an electronics malfunction in the 10-meter air pistol final created confusion. “Everyone took a shot, but I didn't - I put it off. I still had 27 seconds left. In theory, I could have easily picked up the gun and fired. But the organizers gave the ‘Stop’ command. Of course, I corrected them. And they gave me a new 50-second time slot to make my shot. Maybe this mishap helped me. I relaxed a little more, had time to rest," said Vitalina. 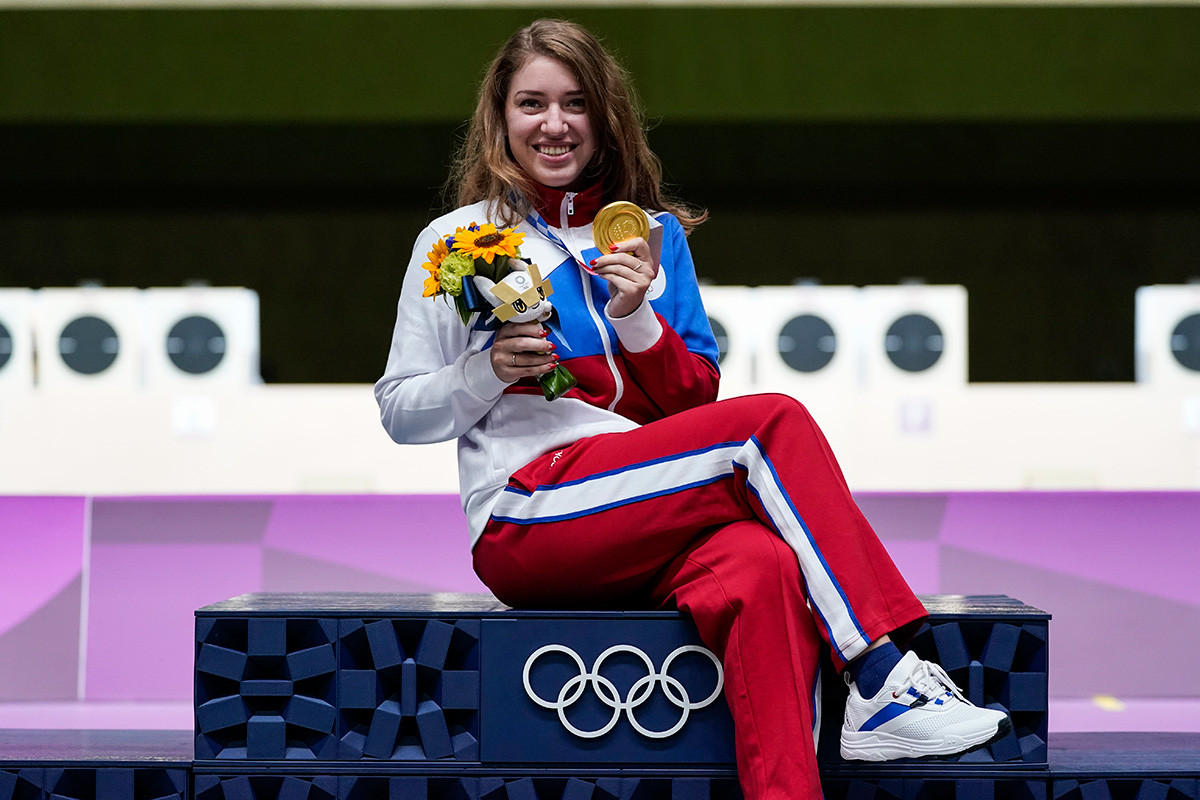 Gold medalist Vitalina Batsarashkina, of the Russian Olympic Committee, celebrates after the women's 25-meter pistol at the Asaka Shooting Range in the 2020 Summer Olympics, Friday, July 30, 2021, in Tokyo, Japan

After the competition, Vitalinawas given a six-month vacation. She plans to use this time to marry her boyfriend. However, she is planning to return to training much sooner.

"I think about Paris (the 2024 Olympics will be held in Paris - ed.),” said Vitalina. “There are jokes, like, maybe the baby is already coming or something. And I say that Paris will happen soon and there's no time to do anything else”.