Russia declares war on electric scooters. Who will blink first? 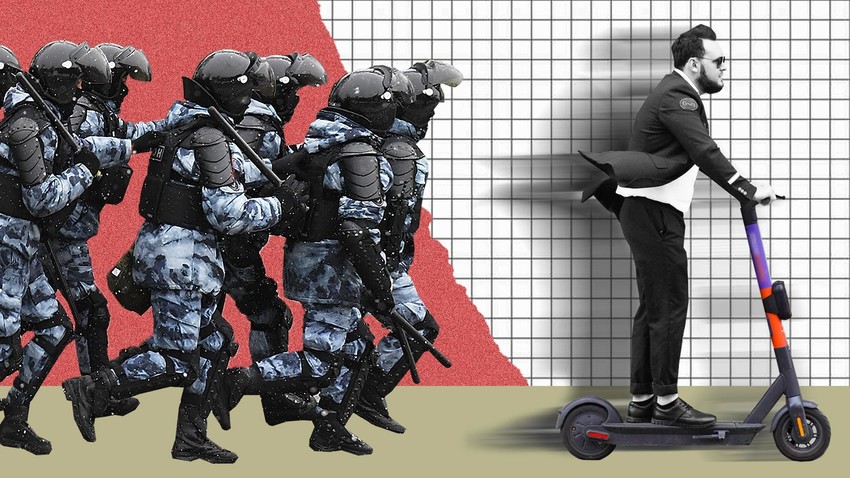 Kira Lisitskaya (Photo: Alexander Avilov/Moskva agency; Ilya Pitalev/Sputnik)
Silent, quick, deadly. For several years now the Russian authorities have been trying to get to grips with this new mode of stealth transport. With little success. The conflict has now reached a critical stage.

Electric scooters are gaining popularity in Russia, especially of late during the pandemic: in just one month, from March to April 2020, demand for them shot up by 350%, and by year’s end they had outstripped bicycles in the rental market. 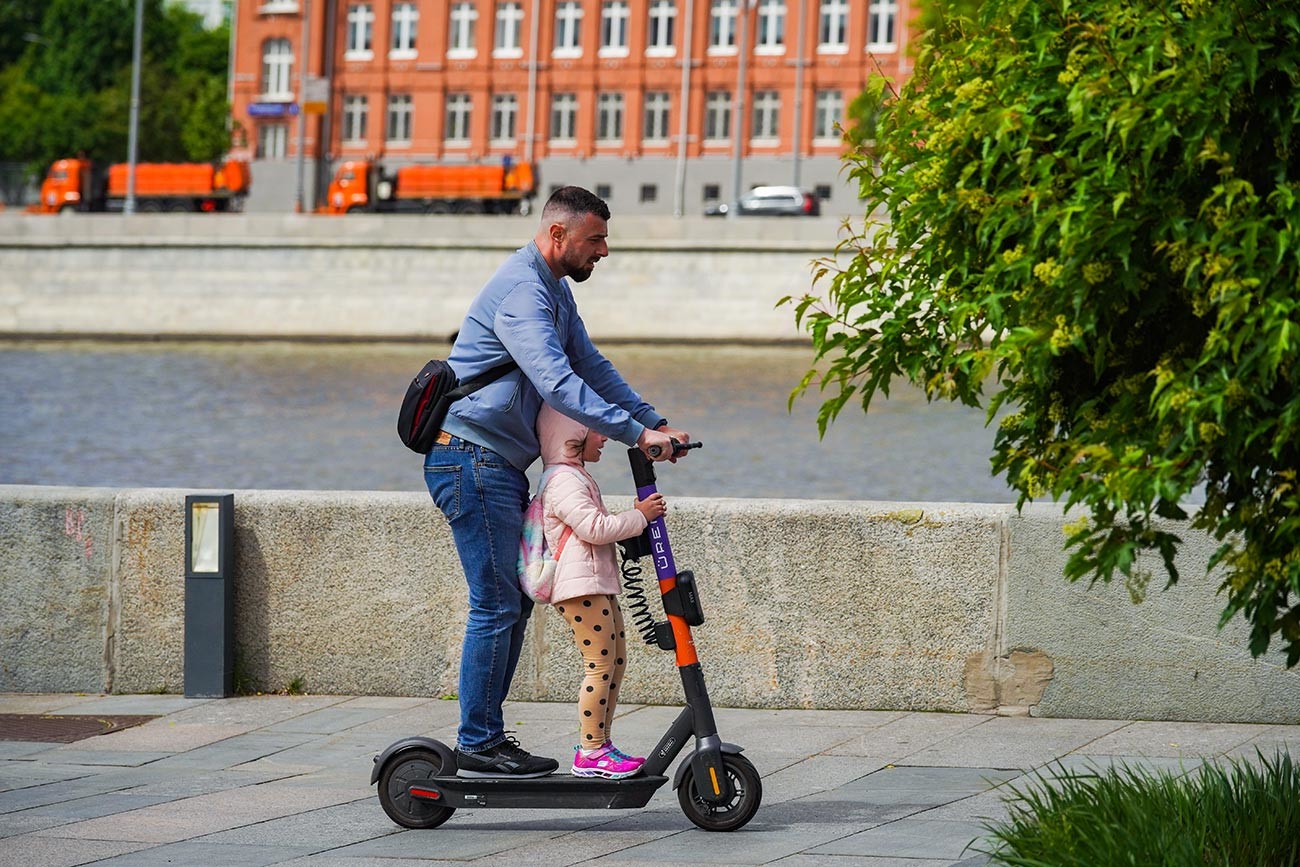 However, their very popularity soon became problematic. Following a string of incidents, some leading to criminal charges and prosecution, public anger is on the rise. Many want to see scooter-free zones introduced, likening the vehicles to traumatic weapons.

“I realized that scooters are the non-lethal weapons of the vehicle world.”

In a nutshell, scooters have become one of the hottest topics in Russia this summer. Here’s why.

They are not, in fact, non-lethal. No fewer than five people have died from scooter-related injuries in the past six months.

“I was walking down the street and saw them rushing at me in twos and threes. I had to stop because I couldn’t judge their speed or trajectory. It’s one thing if you can see them, but something else entirely if these hotshots come racing up behind you. It’s terrible. You start cursing the laws, or rather the lack thereof. Pedestrian rights in Moscow have long been ignored,” says Moscow resident Olga Vovikova on Facebook.

Russia’s first electric scooter rental service, Dilisamokat, appeared in Moscow in the summer of 2018. The city mayor, Sergey Sobyanin, even attended its opening. Since then, the market has grown steadily, and the list of major players is approaching two dozen nationwide. At the same time, the number of collisions between scooters and pedestrians has also grown in proportion. Some have resulted in serious injuries and fatalities.

David Zaleev, a ballet soloist for the Mariinsky Theater, was riding drunk along the sidewalk, clipped a passerby and fell off, after which he spent more than two weeks in a coma. On June 1 and 2, in different districts of St. Petersburg, two 4-year-old boys and one 5-year-old girl were struck by electric scooters; all the children were hospitalized, two in serious condition. And then there’s Maxim Molodshy, an employee of e-service E-motion, who this year himself suffered from colliding with a scooter on the sidewalk, almost losing his leg due to a tendon rupture. “The Ninebot scooter weighs 40 kilograms, and the rider weighed about 80 kilograms. The guy crashed and broke his skull. That’s the most common scooter injury,” he says. 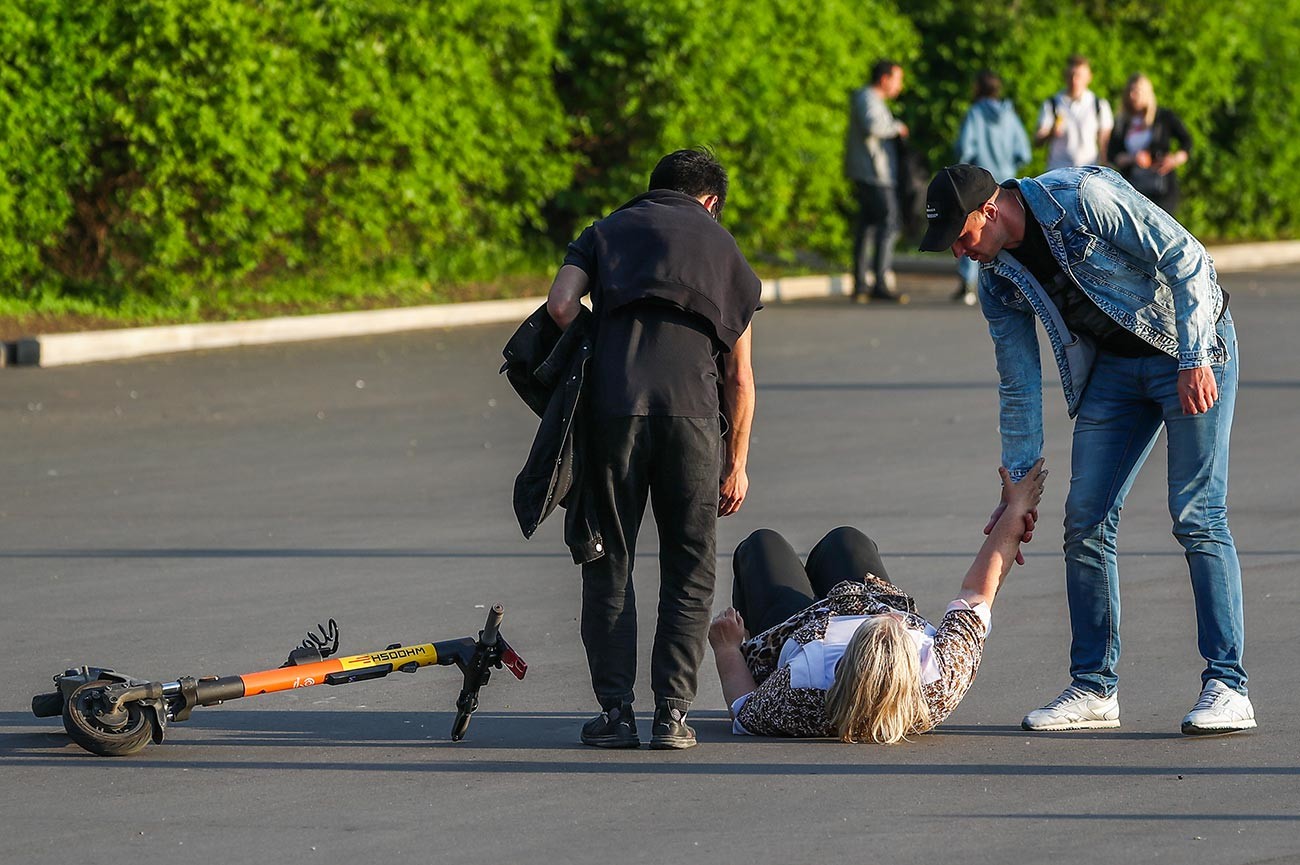 According to statistics from the Russian Ministry of Internal Affairs, in the first six months of 2021 there were 180 accidents involving electric scooters in Russia, resulting in five deaths.

Silent, heavy and, in many cases, able to accelerate to 30–50 km/h in just a few seconds, electric scooters have become a cause of fear. Another reason for the alarm is that even the law has no idea what to do about them.

No license, helmet or cycle lane

Kicksharing in Russia is still not strictly regulated, with no clear legal status at the federal level, despite the need for amendments having been discussed for a number of years. At present, this mode of transport is considered equivalent to vehicle-aided pedestrians (that is, people in wheelchairs, pushing a trolley, roller-skating, etc.). Because of this, scooterists have the right to ride on sidewalks, pedestrian and cycle paths and, in the absence of those, along the side of the road, but facing the flow of traffic. 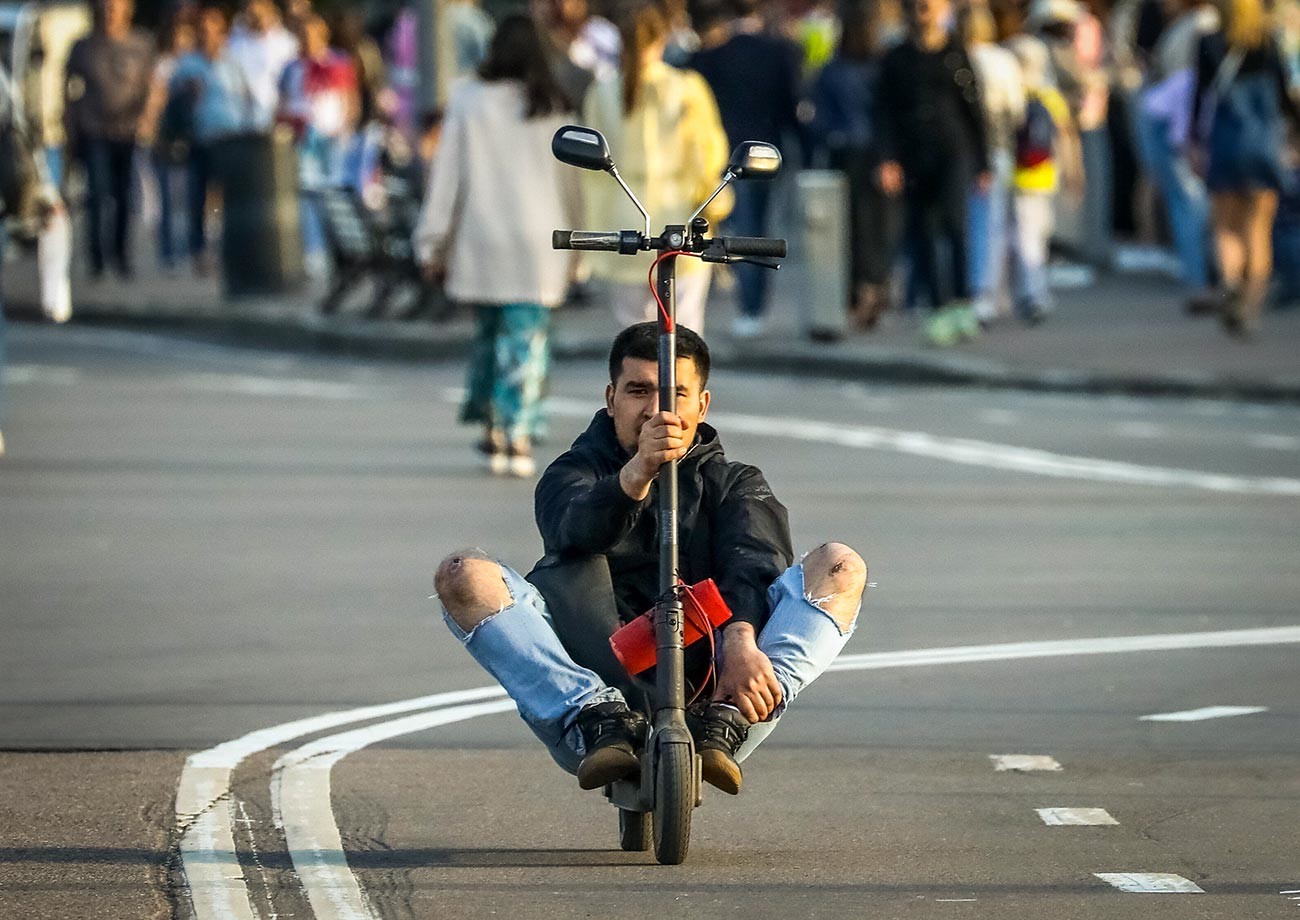 What’s more, riders can either hire a scooter or use their own. Rental services do not require documents at registration, only a bank card. The user simply has to check an “I am at least 18” box. If the power of the electric motor does not exceed 250 watts, there’s no need for a driver’s license. Protective gear is optional, too.

“Most of the current controversy around scooters stems from the undefined legal status of scooterists,” agrees Yulia Kamoylik, press secretary of kicksharing company Whoosh. “According to the rules of the road, they can be classified as pedestrians, cyclists or, in the case of powerful private scooters, moped users.”

The matter caught the attention of the Investigative Committee (IC), which began to address the problem with criminal proceedings.

In mid-May, the IC stepped in after two scooters knocked down pedestrians on the same night on Nevsky Prospekt in St. Petersburg. The culprits were quickly found, and one was charged with hooliganism. But the second criminal case was brought against Whoosh, one of the largest and most successful kicksharing companies in Russia, for failure to comply with safety requirements. 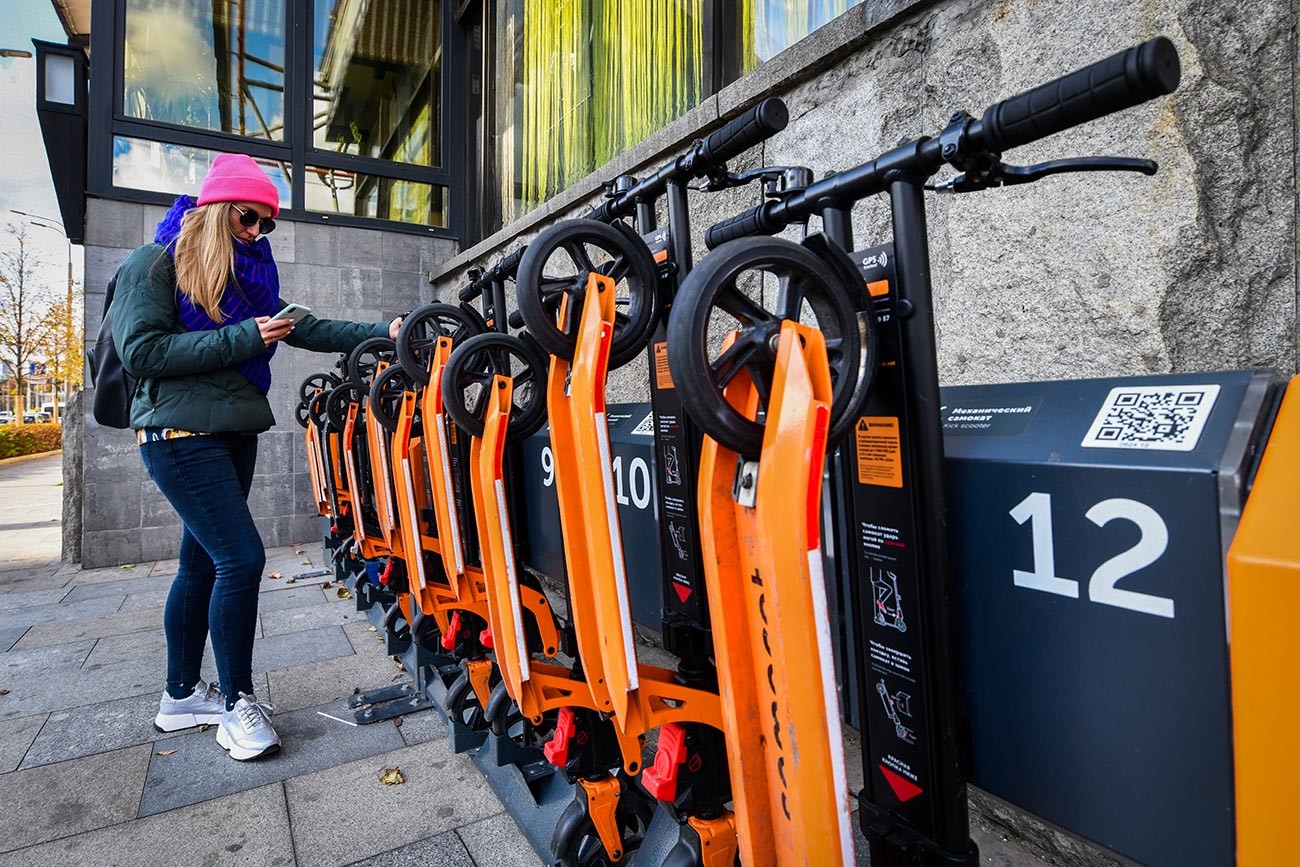 By early June, investigators had already searched the offices and warehouses of Whoosh and other companies too, including Urent, Eleven, Mangoo and Busyfly. As a result, six criminal cases related injury through negligence and hooliganism were opened. Similar searches soon took place in other regions of the country.

On the morning of June 9, residents of St. Petersburg discovered that kicksharing apps were no longer working. The head of the St. Petersburg Transport Committee, Kirill Polyakov, stated that the companies themselves had taken the scooters off the streets because of the IC’s actions. However, Forbes magazine, citing a source in one of them, wrote that they had removed the scooters only at the request of the IC: “The IC made it clear that if we didn’t remove them, they’d remove us.”

Slow down or shut up shop?

So far, rental companies are trying to negotiate the introduction of slow and red zones with local authorities, before the adoption of general rules. What these rules will look like is still a matter of debate.

The Civic Chamber, a consultative civil society institution, proposes to classify powerful scooters as mopeds, and the St. Petersburg authorities to register users against passport details and to set up a database of violators. The Ministry of Transport is discussing limiting the speed on sidewalks to 20 km/h and introducing a ban on riding in parks, near subway and train stations, and shopping malls. 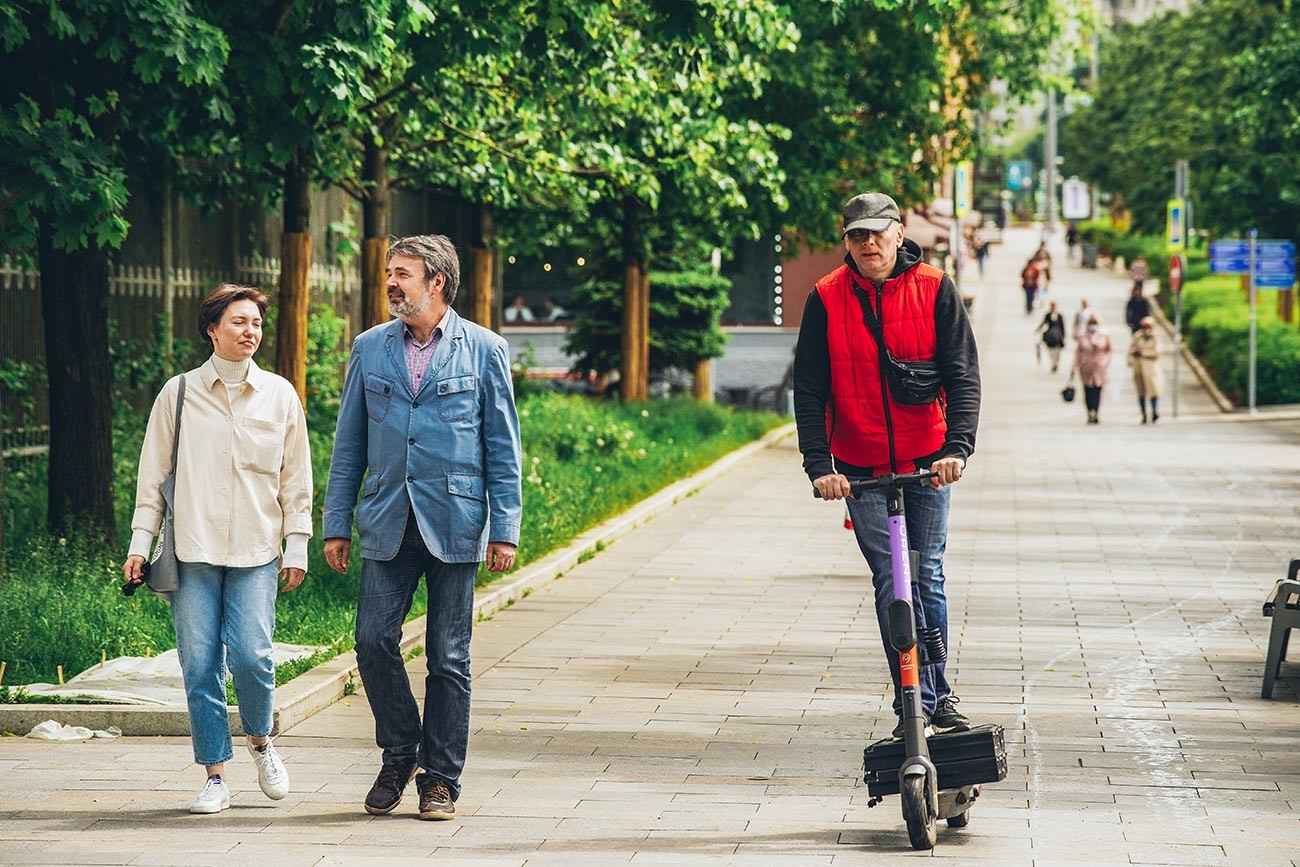 Opponents of scooters are not satisfied with these measures. “When I cross the road, I understand the danger and look around. Walking along the sidewalk, I am not obliged to keep a constant lookout for some a-hole flying toward me at a speed of 50 km/h. On the sidewalk I have the right to be immersed in my phone,” writes user Madegghead.

Nevertheless, it is unfair to shift all the blame onto kicksharing companies, says Igor Serkin, head of litigation at the law firm Cliff: “There are no set safety requirements for rental companies. Foodstuffs have them, as do specialized services like amusement rides. But what danger is associated with rental services? If you hire a car, should the rental firm monitor your driving? No. It should check your license. In the case of electric scooters, no such license exists [at present].”

Lack of infrastructure is often cited as part of the problem. In some European countries, electric scooters are only allowed on cycle paths. Here’s what Alexander Osipov, head of the public movement Small Electric Transport of Russia, has to say: “As part of our movement, we rode electric scooters in all the major cities of Russia from Vladivostok to Kaliningrad and realized that there was no adequate infrastructure, not even in Moscow and St. Petersburg. Cycle paths are a joke; they start and end abruptly, and riders have to use the sidewalk and other unsafe areas.”

But if scooters are recognized as vehicles and banned from sidewalks and parks, this will kill the rental business,” says Yuri Nikolaev, who runs the online portal Trushering. After all, most riders do what they do for fun.