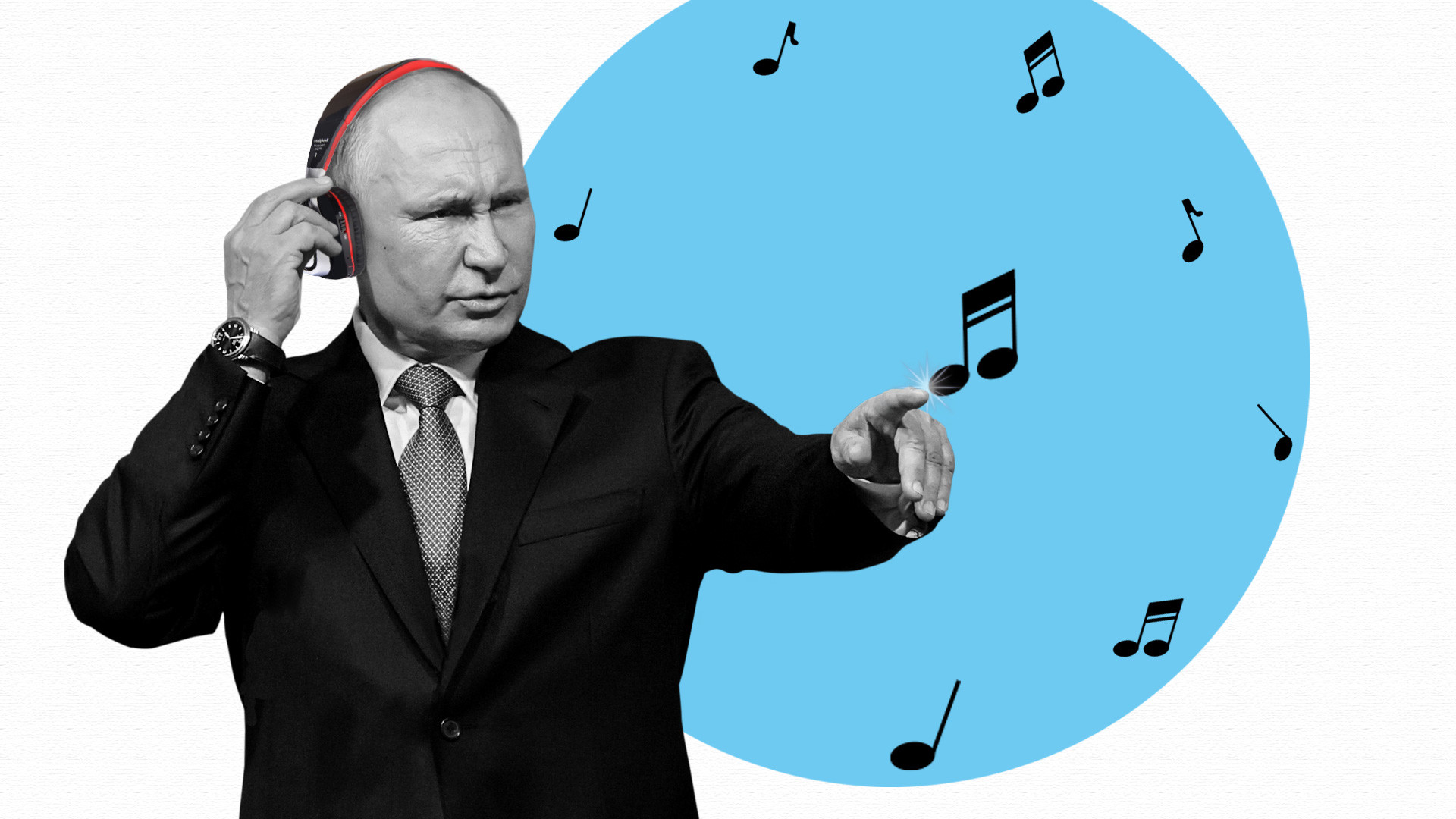 The Russian president has declared his love for classical music on more than one occasion. In particular, he has mentioned Pyotr Tchaikovsky - according to Putin, the composer’s First Piano Concerto has had a great impact on him.

“I like both contemporary music and so-called popular classical music. But music that is not too complex, because for that you would need a well-trained ear. As for traditional classical works by the world’s most popular composers, I like listening to those,” Putin said in an interview after his big annual press conference in 2018.

2. Mark Bernes - ‘Where Does the Motherland Begin?’

It is 2010 and the event is a charity concert in support of children with cancer at the Ice Palace in St. Petersburg. Among those present are famous actors Sharon Stone, Monica Bellucci, Mickey Rourke, Alain Delon and Ornella Muti, as well as dozens of other international celebrities. Some participants perform dance acts and others sing or recite poems about birch trees by Russian poet Sergei Yesenin.

Towards the end of the evening, Putin comes on stage (he was Russian Prime Minister at the time), sits at the piano and starts playing the tune of a popular Soviet song by composer Veniamin Basner with lyrics by Mikhail Matusovsky from the 1968 movie ‘The Shield and the Sword’. The song goes as follows:

“Where does the Motherland begin?

It begins with a picture in your ABC

With good and loyal friends

O perhaps it begins with a song that

Mother sang to us.

With things that whatever ordeals we face

Cannot be taken from us.”

Nowadays, it is one of the best known patriotic songs in Russia. Ever since Soviet times, schoolchildren have been writing essays on the subject of “Where Does the Motherland Begin?” and the song’s title has also been used for drawing and singing competitions and even served as the title of a TV series.

In addition to playing the above mentioned patriotic song on the piano, Putin also sang at the same charity event in St. Petersburg - it was the famous Louis Armstrong number. Despite his strong Russian accent, the entire audience gave him a standing ovation.

And at a women’s forum in 2011 Putin confessed that he was a fan of jazz.

4. Leonid Utyosov - ‘The Windows of Moscow’

On another occasion, the president demonstrated his skill on the piano at the residence of President of the People’s Republic of China Xi Jinping in 2017. Putin spotted the instrument on his way to the negotiating room and decided to play the tune of ‘The Windows of Moscow’, the most popular Leonid Utyosov song.

“I admire you at night,

I wish you happiness, windows...

It has been dear to me for many years,

And there is nothing brighter than

The unquenchable light of Moscow’s windows.”

Later, the president confessed that the piano hadn’t been tuned and he hadn’t expected the video to be made public.

“But it is not a problem. I don’t think I let you down,” Lenta.ru cited Putin as saying.

In 2009, the Guardian newspaper, citing its own unnamed sources, reported that Vladimir Putin was also a fan of Swedish pop group Abba, but because the group had broken up back in the 1980s, a secret concert had allegedly once been arranged for him with the British tribute band, Björn Again.

The newspaper said that the group played 15 Abba songs for Putin, including ‘Waterloo’, ‘Gimme! Gimme! Gimme!’ and ‘Dancing Queen’.

At the time, the president’s press secretary, Dmitry Peskov, denied that Putin had attended a secret concert. In 2018, Peskov said that Putin did indeed like “certain songs” by Abba. ‘Gimme! Gimme! Gimme!’ is undoubtedly to be found among them.

Before a concert he was giving on the Red Square in 2003, Paul McCartney met Vladimir Putin in the Kremlin, putting on a personal performance of ‘Let It Be’ for the president.

The president was left delighted and described McCartney’s rendering of the song as a “gulp of freedom”.

Dmitry Peskov also referred to Putin’s fondness for The Beatles in 2009 - he said the president liked The Beatles even more than Abba.

And, in May 2020, British newspaper The Daily Express reported that the president had another favorite number by the four Liverpudlians - ‘Yesterday’. As it is difficult to choose between the two, both songs make it onto Putin’s playlist.

Russia discovered back in 2002 that Vladimir Putin was a fan of this Russian rock group that, for the last 20 years, has sung about the Russian countryside, the hardships of army life and even the Crimean Bridge. In that year, the president attended one of the group’s concerts in Sochi and afterwards invited the members to his residence.

“The guys sing about us, our lives and do so in an accessible way and in a language people can understand. A big thank you to them for this,” the head of state said.

Subsequently, he has praised the group on more than one occasion and wished the band’s lead singer, Nikolay Rastorguyev, a happy birthday, declaring that his songs had acquired “cult status for several generations of listeners”.

8. Vladimir Vysotsky - ‘Dialogue in Front of the TV’

The president has repeatedly quoted the songs of this well-known Soviet singer-songwriter in his speeches. Among the songs quoted have been The Honor of the Chess Crown, A Little Song about Rumors and Dialogue in Front of the TV with the famous quote: “How can we afford it, Zina?”

“He [Putin] has a conscious or unconscious affinity with Vysotsky. He likes Vysotsky a lot,” according to Pavlovsky.

All the songs on Putin’s playlist can be found in the Russia Beyond profile on Spotify.