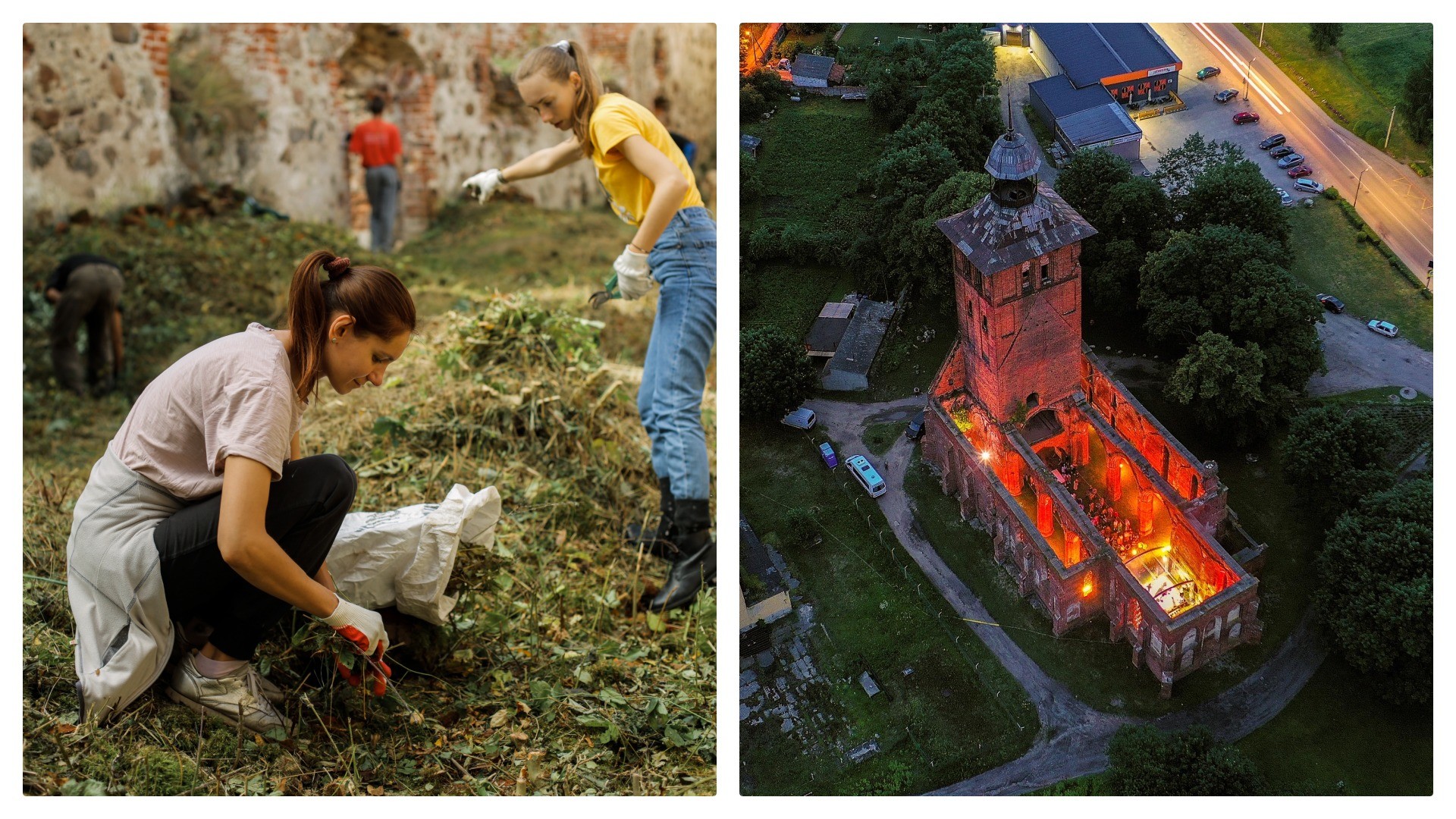 Andrei Novozhilov @peps39; Anna Greber @struzhka_v_dome
Kaliningrad, Russia’s westernmost region, which used to be German territory, has numerous castle ruins of the Teutonic knights. Centuries later, local enthusiasts are trying to save what's left of them from further destruction and hope to restore them someday.

The Kaliningrad Region is the westernmost part of Russia and a unique place. It became part of Russia following World War II, having previously spent several centuries as part of Prussia and, before that, the State of the Teutonic Order. The memory of this period in Kaliningrad’s history (which until 1946 was called Königsberg) still survives in the ruins of dozens of old castles and churches, some of which can be found in the middle of modern residential areas. Each weekend, a group of volunteers visits one of these sites to clear it of litter and fallen branches. They call themselves the Ruin Keepers. 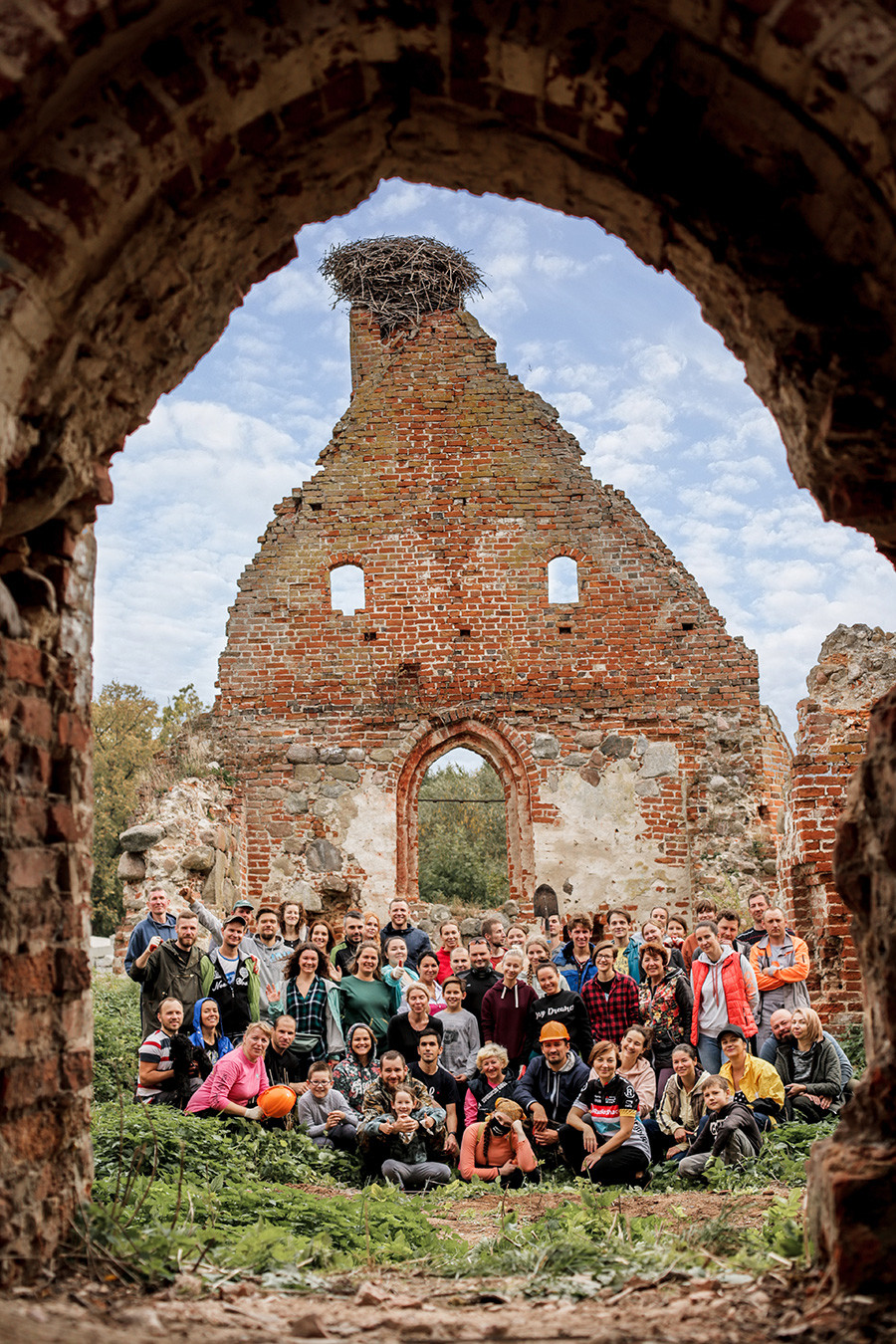 Volunteers at the ruins of the Lichtenhagen Kirche in Yablonevka

“It all began with a handful of people, whereas now our weekend events attract, on average, 70-80 volunteers,” says Svetlana Nazarova, the Ruin Keepers’ coordinator. The volunteers are mostly people from Kaliningrad and the surrounding area who work regular jobs during the week and devote their Saturdays and Sundays to saving old architecture.

This movement was founded in early 2020 by Vasily Plitin, a resident of the Kaliningrad Region. As a child, he, like many here, spent his free time playing in the ruins of Teutonic castles and abandoned Prussian churches. As an adult, he began to gather like-minded people to clean up the area, and gradually these occasional events turned into weekly ones after receiving wide publicity on social media. 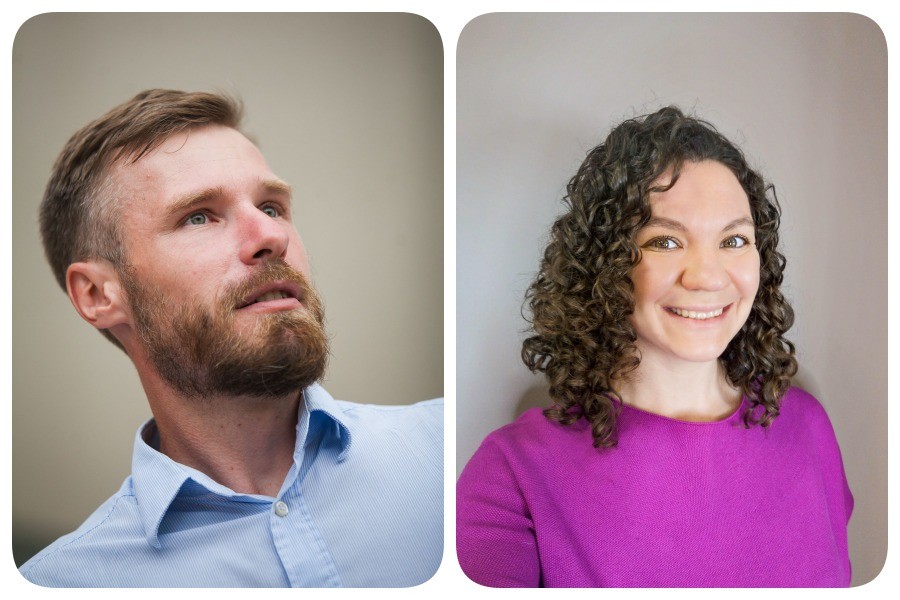 At various times, these buildings were used as defensive structures, barracks and for administrative needs, but over time their walls and interiors became dilapidated. Many were damaged during the war. At this point, their past glory has largely been reduced to ruins that are a familiar sight for local residents. One person might see skyscrapers from their windows, while another sees a ruined 600-year-old church.

“Sometimes local residents join us, but not so often,” says Svetlana. “As a rule, they do not care about these ruins at all. Furthermore, the ruins are often located in rundown areas and get vandalized by the locals.” 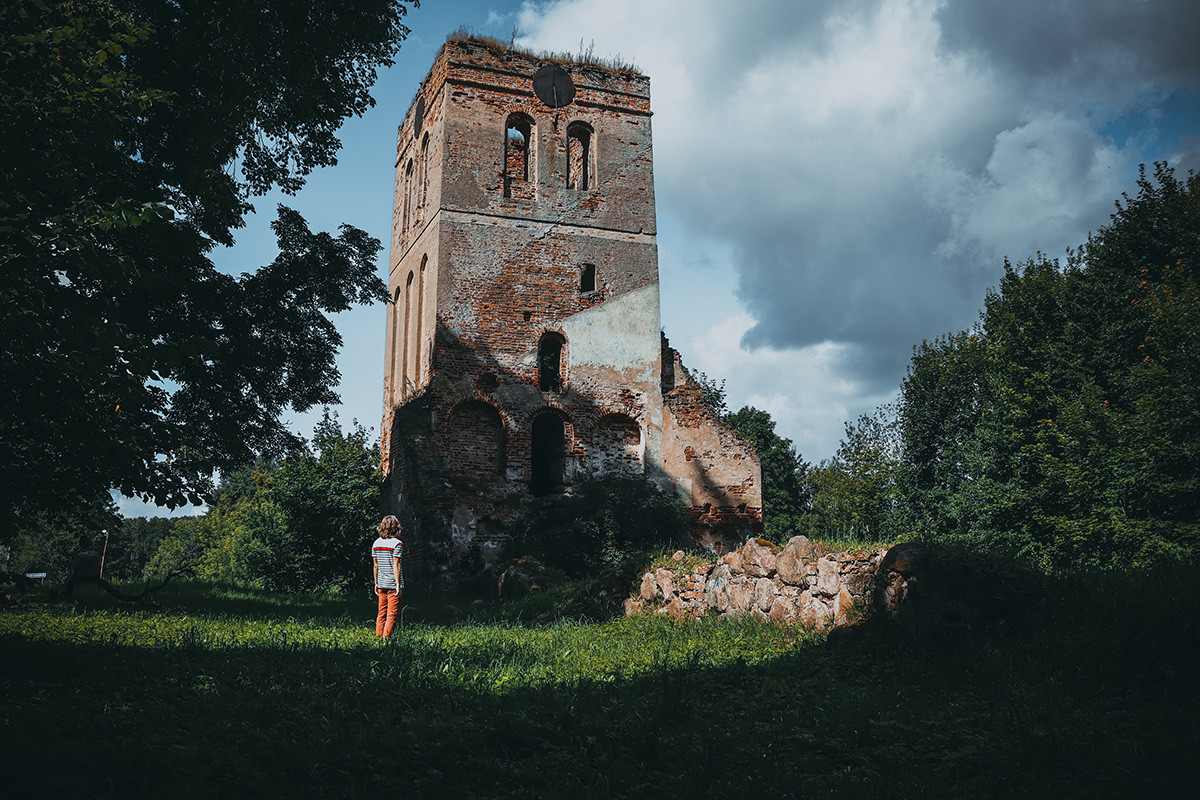 Since all these ruins are cultural heritage sites (and have also been under the jurisdiction of the Russian Orthodox Church since 2010), any restoration or conservation work is a complicated matter that requires special licenses, considerable funding and the involvement of architectural experts. The only thing that volunteers can do is to make the area around the ancient walls a little cleaner. And even these activities need to be coordinated with local authorities, who are very sympathetic to the volunteers and sometimes even provide them with special cleaning equipment.

The Ruin Keepers estimate that they have already cleaned nearly 30 sites, some of which required multiple visits. 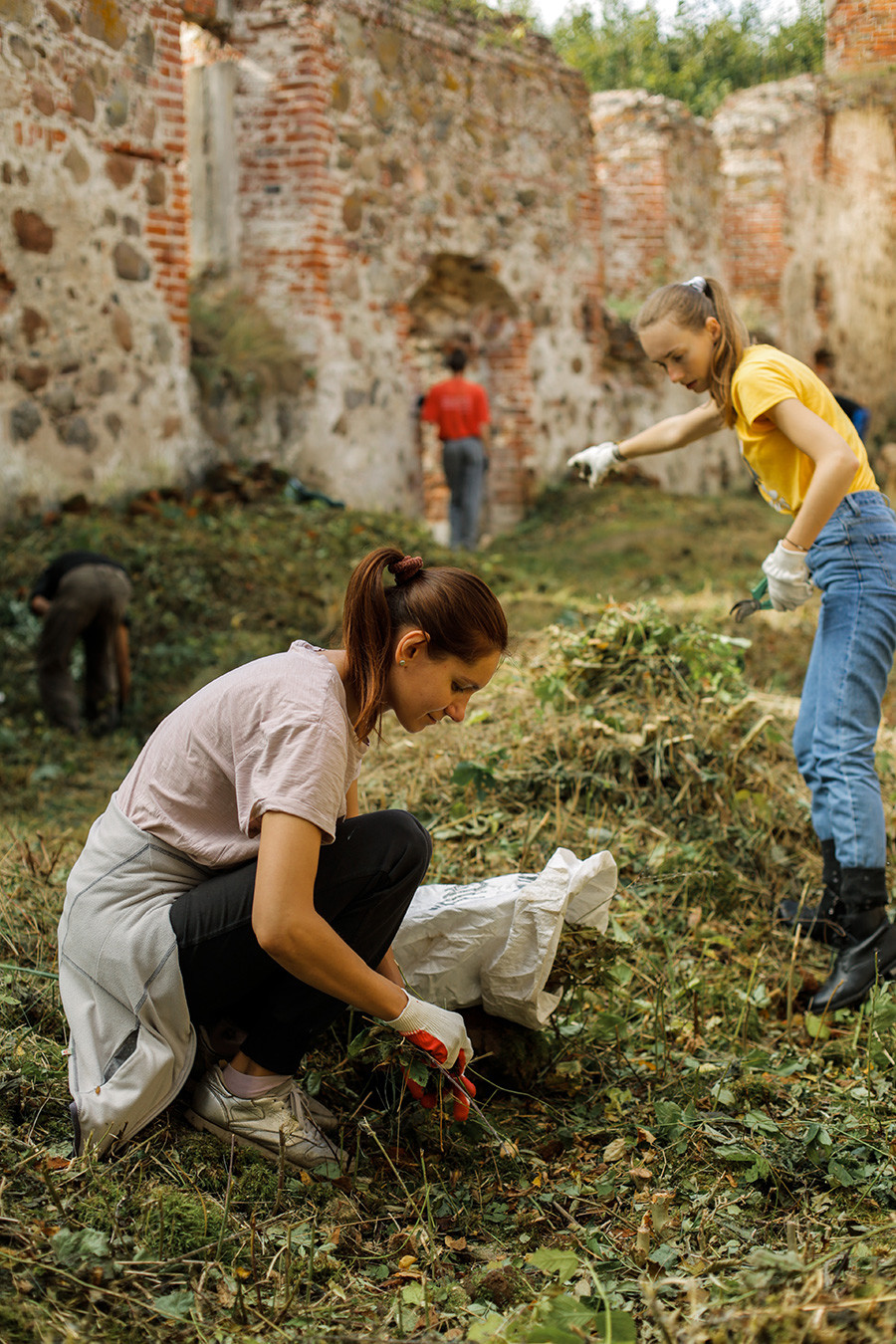 Volunteers working in the church of St. Barbara in Khrabrovo (former Powunden)

“Our main task is to remove vegetation and litter and neatly stack pieces of bricks and tiles that have fallen out,” Svetlana says. “For example, the site in the village of Ushakovo near Kaliningrad required five visits. We cut down trees that had grown inside the walls, mowed the adjacent area, including a former cemetery, cleaned soil from the tower and removed the stumps.” But it was all worth it since the result was a thing of beauty! 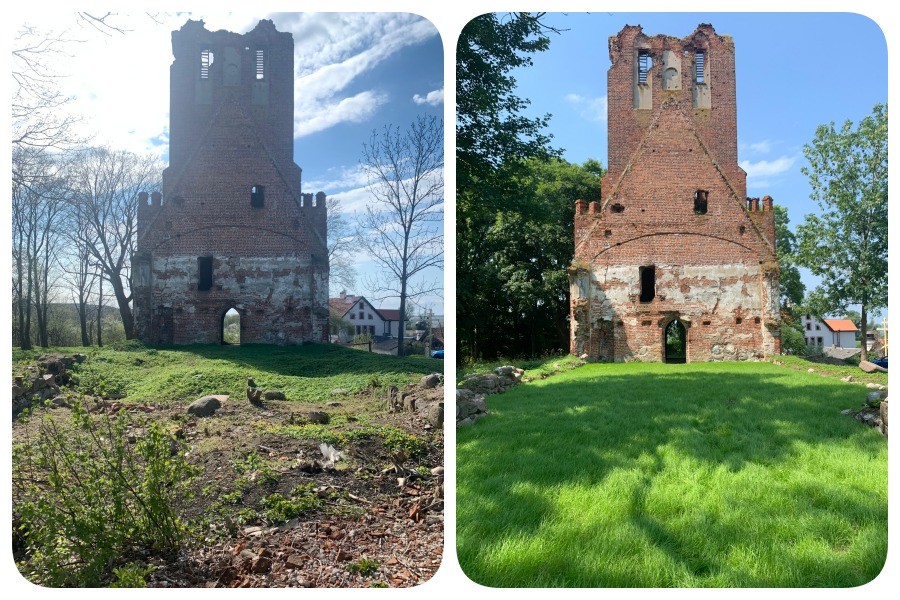 Before and after: Brandenburg Kirche in Ushakovo

Interestingly, after the ruins are tidied up, locals tend to treat them with more care and respect and stop using them as dump sites. If volunteers see that a site’s roof or walls are about to collapse, they notify the local administration in the hope that they will take at least some action to save a cultural site from being destroyed.

“Sometimes we choose sites that are located quite far from Kaliningrad. Getting there requires more effort, so in the future we would like to find local activists who themselves would monitor these sites,” says Svetlana. 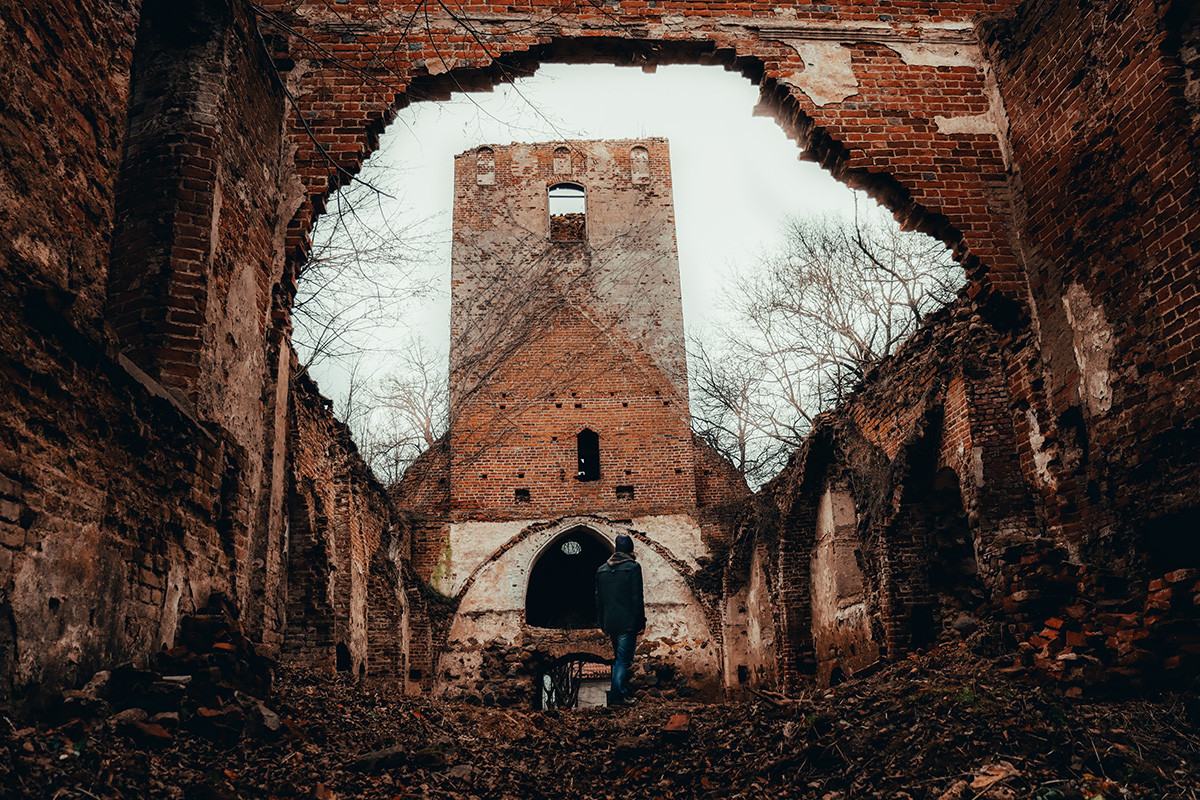 The Ruin Keepers believe that restoring all the sites in the region is probably both impossible and unnecessary. However, it is necessary to monitor their condition as they continue to crumble, and it would be great to include them on tourist routes, even in their present state. The organization believes it is necessary to save the ruins and that every year counts. “We need to save them from total destruction and make them accessible, safe and attractive for tourists,” says Vasily, who is involved with the project.

The Keepers would like these old castles and churches to be turned into historical parks, where visitors could come, read information about the sites and explore them on foot. 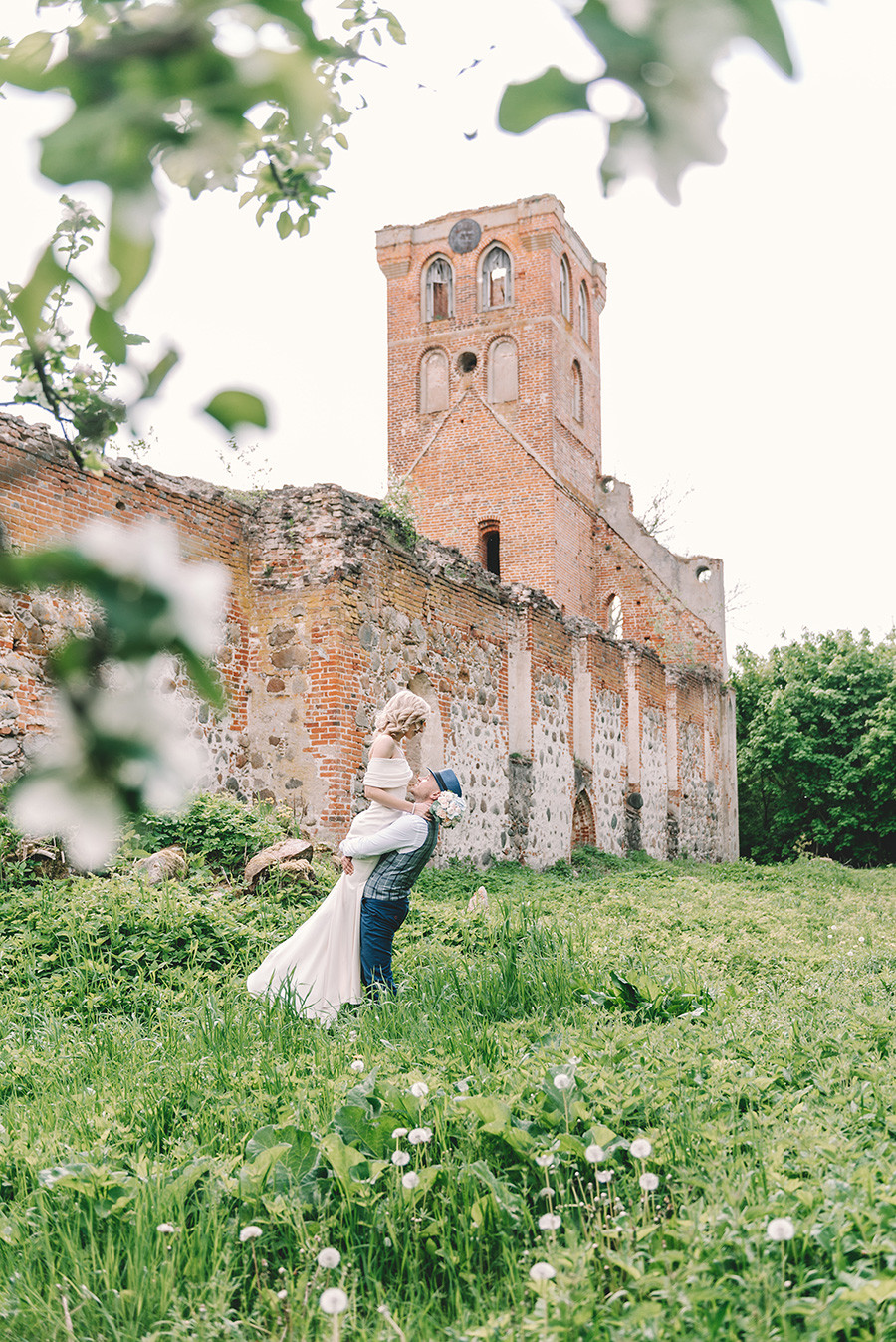 The region already has examples of successful Middle Ages-themed tourism, says Svetlana. For example, Nadezhda and Sergei Sorokin rented Waldau Castle (15 km from Kaliningrad), which was built in 1264, and are restoring it on their own. Previously, this castle was the seat of the Grand Masters of the Teutonic Order. During Soviet times, it housed an agricultural college, but now there is just a local history museum in one of the outbuildings. The Sorokins have cleared the grounds and partially refurbished the premises, which are now open to tourists. They even grow and sell a local variety of asparagus in the park. 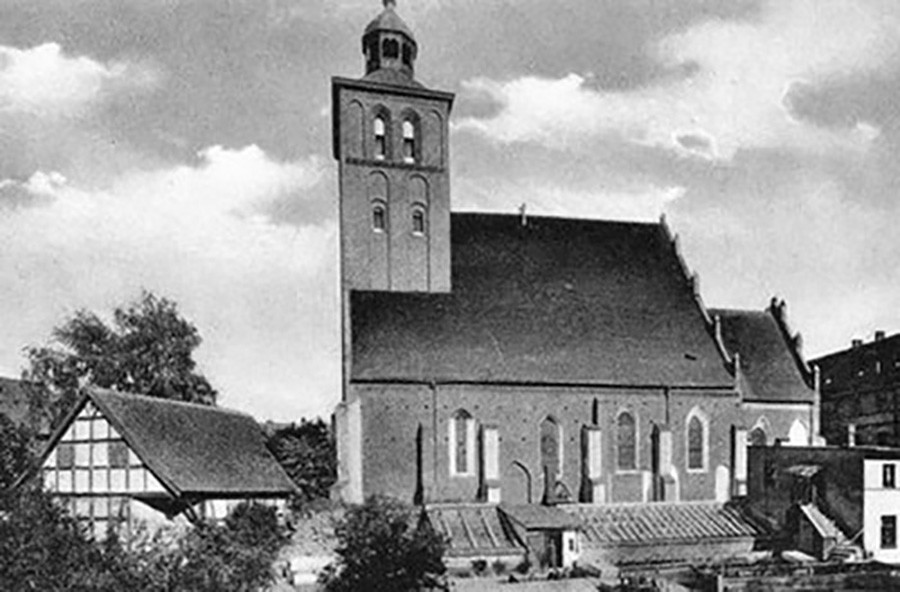 The ruins of the Wehlau church in Znamensk (50 km from Kaliningrad) have been given a new lease on life, with concerts and weddings held here. 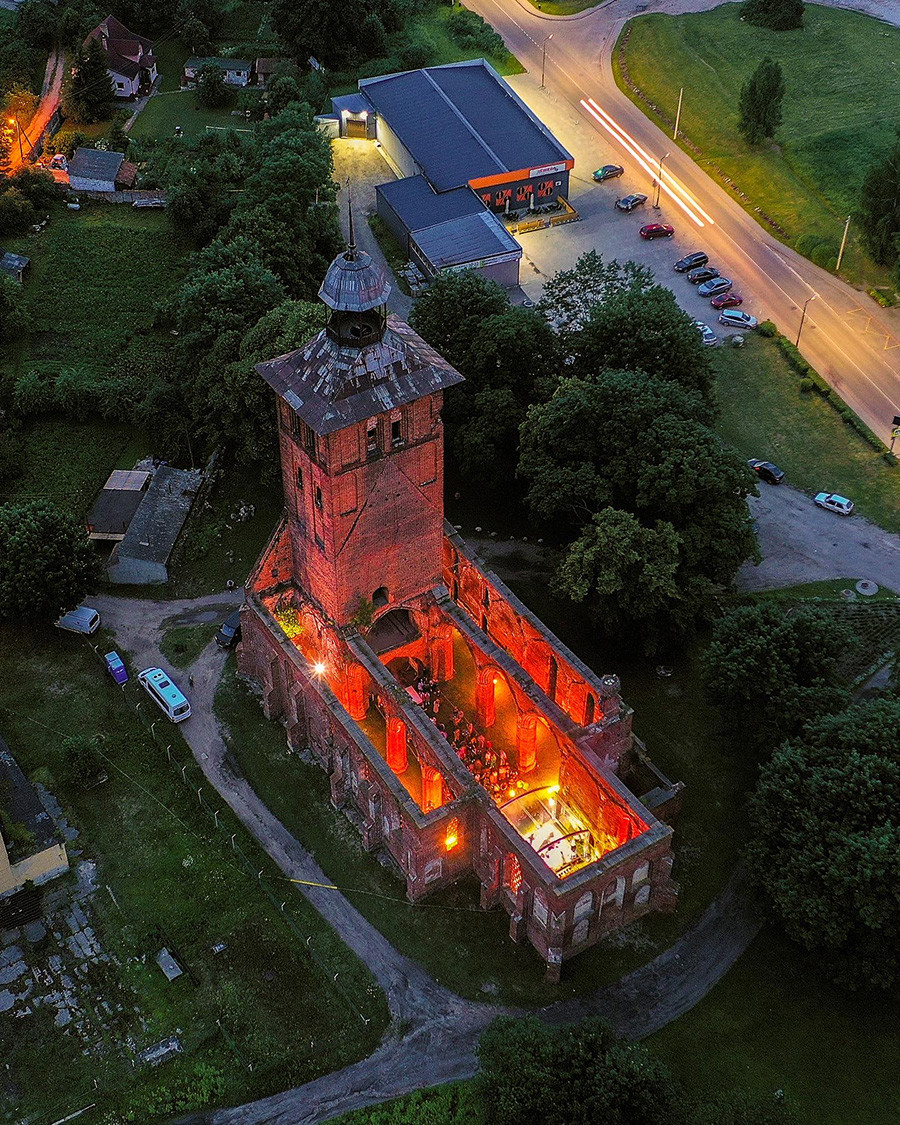 Mgzavrebi band performing at the ruins of the Wehlau (Znamensk) church of St. Jacob

Another example is Ragnit Castle, which is situated in the very center of the city of Neman (120 km from Kaliningrad). Over more than seven centuries, the fortress has lived through countless attacks and fires and was rebuilt each time. Ragnit was badly damaged during World War II, and until recently it stood abandoned. 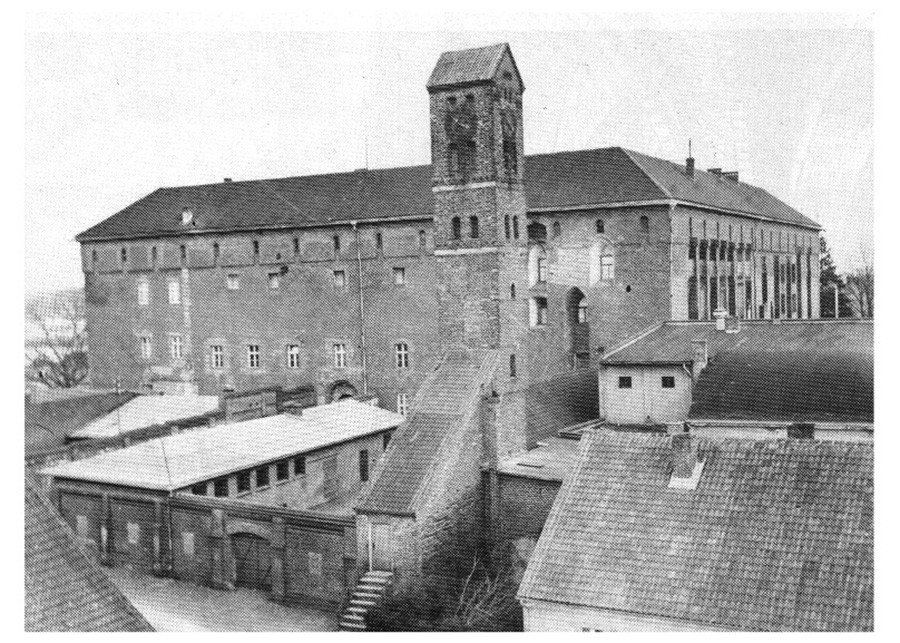 This went on until 2019, when the castle was rented by Ivan Artyukh, a local entrepreneur and history enthusiast. He works in cooperation with the Ruin Keepers and other volunteers, and together they continue to clear the ruins from rubble and litter and are already giving tours around the castle. 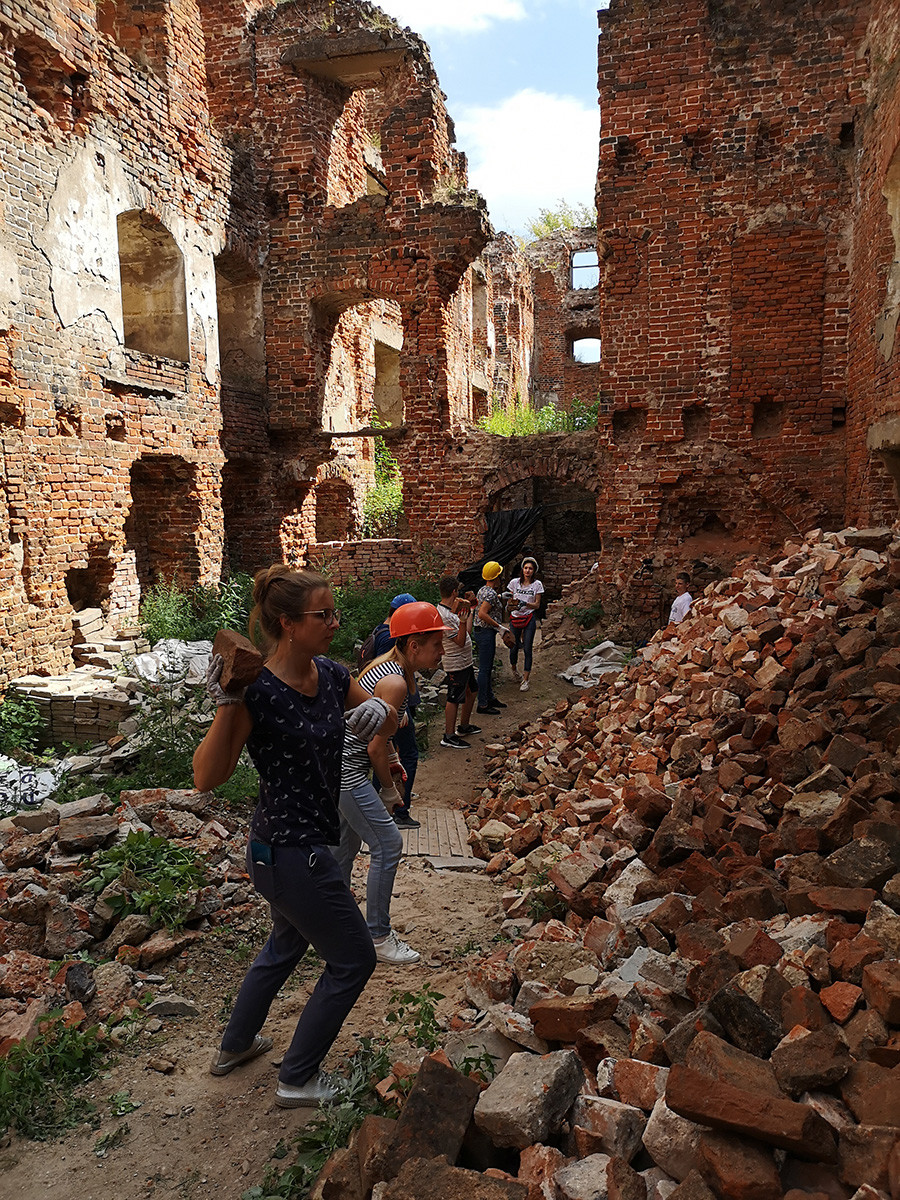 Volunteers working at the Ragnit castle

Ivan says that he and his team would like to restore the castle. “We are now preparing documents that will let us take part in the monument restoration program through an easy loan. If we are lucky, we'll get the loan and get down to the construction work,” Ivan told the Castles and Families project. 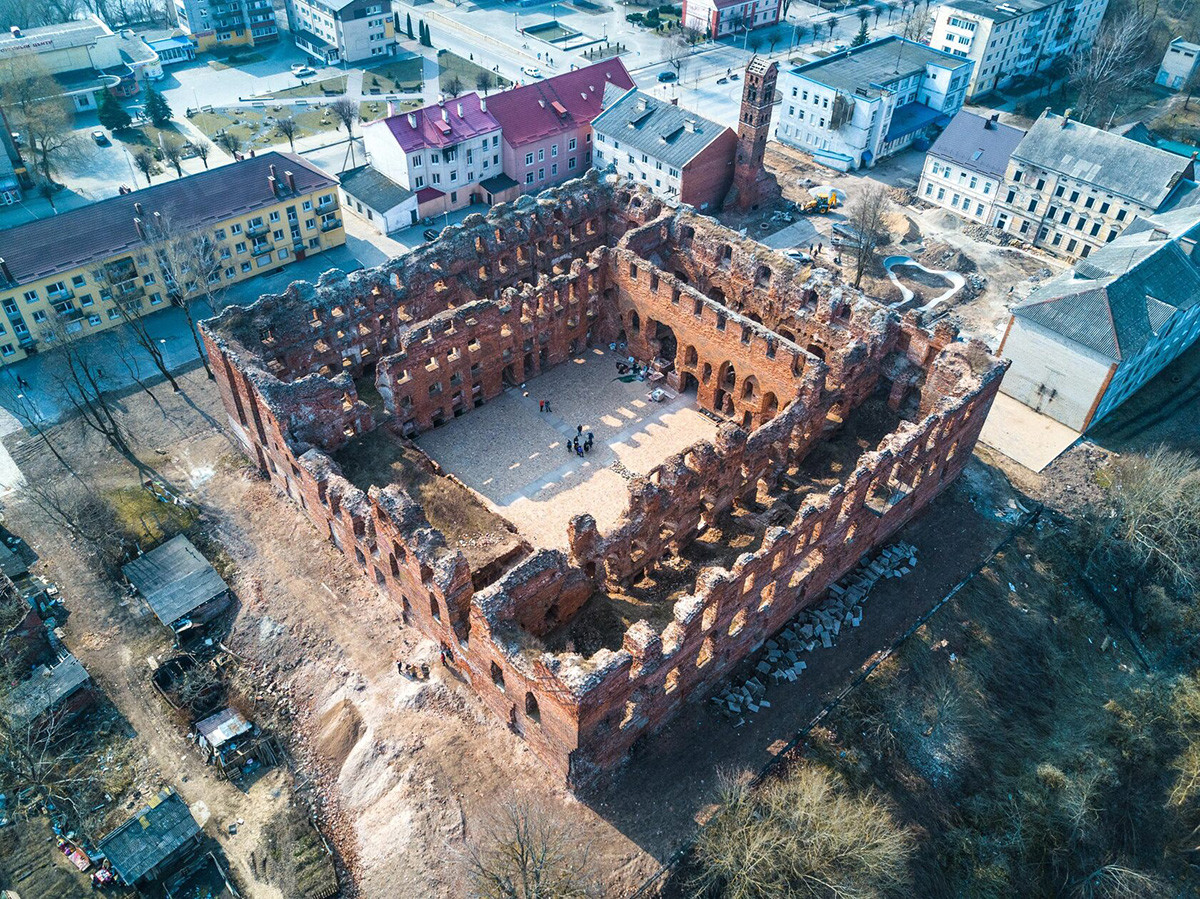 Russia Beyond thanks the Castles & Families project and Artyom Ganin for their support in preparing the article.