Aircraft No. 1: The airplane Putin flies on (PHOTOS) 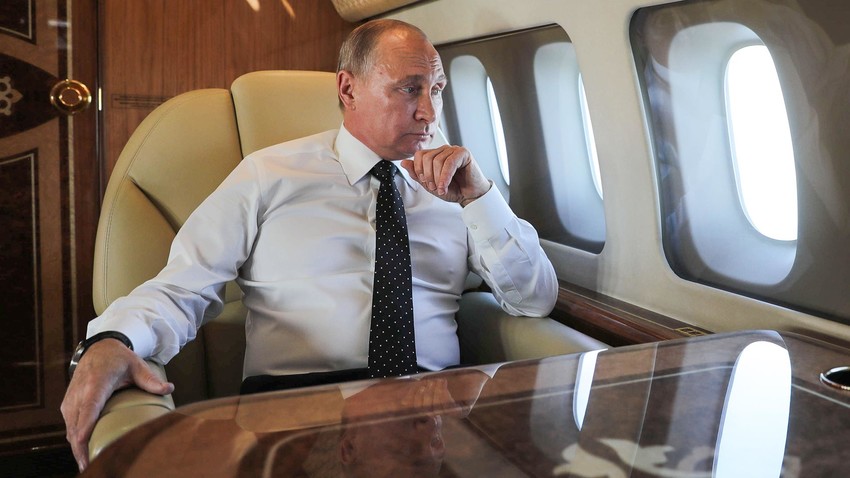 Mikhail Klimentiev/Sputnik
It has a nuclear control panel, a gym - and strict rules. Here is everything we’re allowed to tell you about Aircraft No. 1.

Unique, made in Russia, as safe as can be and, preferably, enormous. This is how ‘Aircraft No. 1’ - the presidential airplane - was conceived back in the middle of the last century. Since 1996, this function has been fulfilled by the Il-96-300PU - the only aircraft Vladimir Putin uses for his trips around the country and abroad. 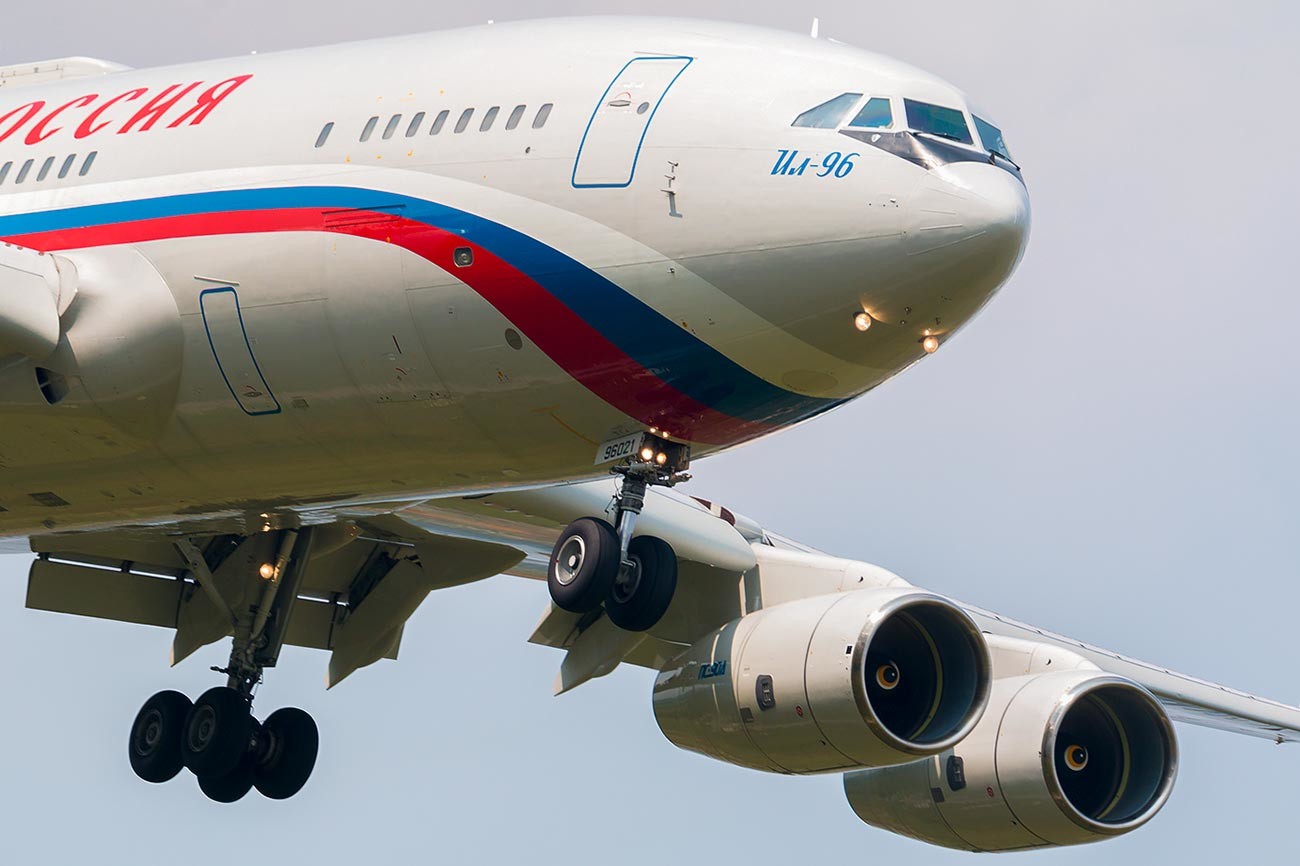 The Il-96-300PU is a large aircraft: 55 meters long with a 60-meter wingspan. It can reach a speed of up to 900 km/h (560 mph) and has four jet engines (while many planes of foreign leaders have two). The same engines are installed on aircraft of the Tupolev Tu-204 and Tupolev Tu-214 series - the two most popular Russian commercial aircraft, which are broadly similar to the Boeing 757.

The aircraft comes in a standard passenger version with a 300-seat capacity. Designed in the 1980s at the Voronezh Aviation Plant, it made its maiden flight on a commercial route in December 1992. Nevertheless, in 2014, Aeroflot fully retired its Il-96 fleet, while other airlines hadn’t even planned to purchase them. All in all, the plant produced 25 such aircraft, but most of them joined the fleet of the ‘Rossiya Special Flight Squadron’ (a subsidiary of Aeroflot), serving the president and government.

There is a simple explanation as to why the president took a liking to the airliner: The Il-96 passenger plane had been regarded as the most promising Russian design - the very height of Russian aircraft construction, as it were. But, it turned out to be too expensive for the airline companies: Its four engines required twice as much fuel and maintenance spending than foreign airliners. 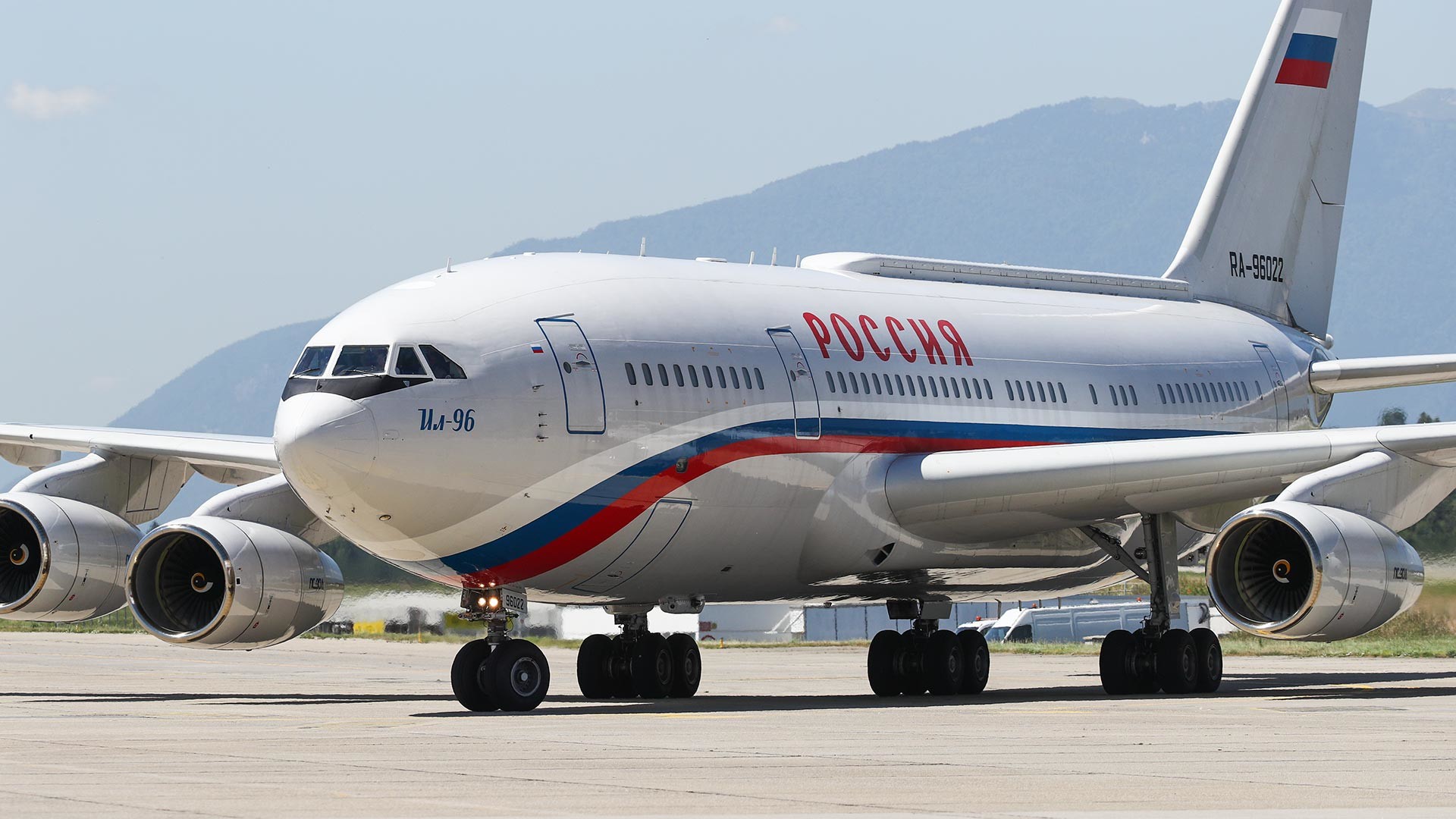 For the presidential aircraft fleet, however, it was exactly what was needed. “The aircraft has four engines. Even if two engines fail, it can still go up or down in altitude, it can still maneuver and continue its flight,” Maj-Gen Vladimir Popov said on YouTube. Even with only one functioning engine, the presidential airliner would be able to fly up to 800 km and land.

“There are a number of reasons why the Il-96 is currently used as the government aircraft,” explained Vladimir Talanov, a merited pilot of the Russian Federation. “First of all, it is indeed a very reliable and safe aircraft, something that the airplane’s exploitation over many years has confirmed. Plus, it has an element of prestige for a state leader - not every state leader can afford to fly on his ‘own’ airplane made by the country’s own manufacturers.” And according to former pilot of Aircraft No. 1 Vladimir Fedorushkin, “[Putin] says: ‘I don’t fly on foreign aircraft in principle.’ He was never afraid, no, you cannot call him a coward. It simply doesn’t fly in principle and that’s all.”

In total, the presidential version of the Il-96 has been upgraded five times since it was first made, the last time in early 2021.

What’s on the inside? 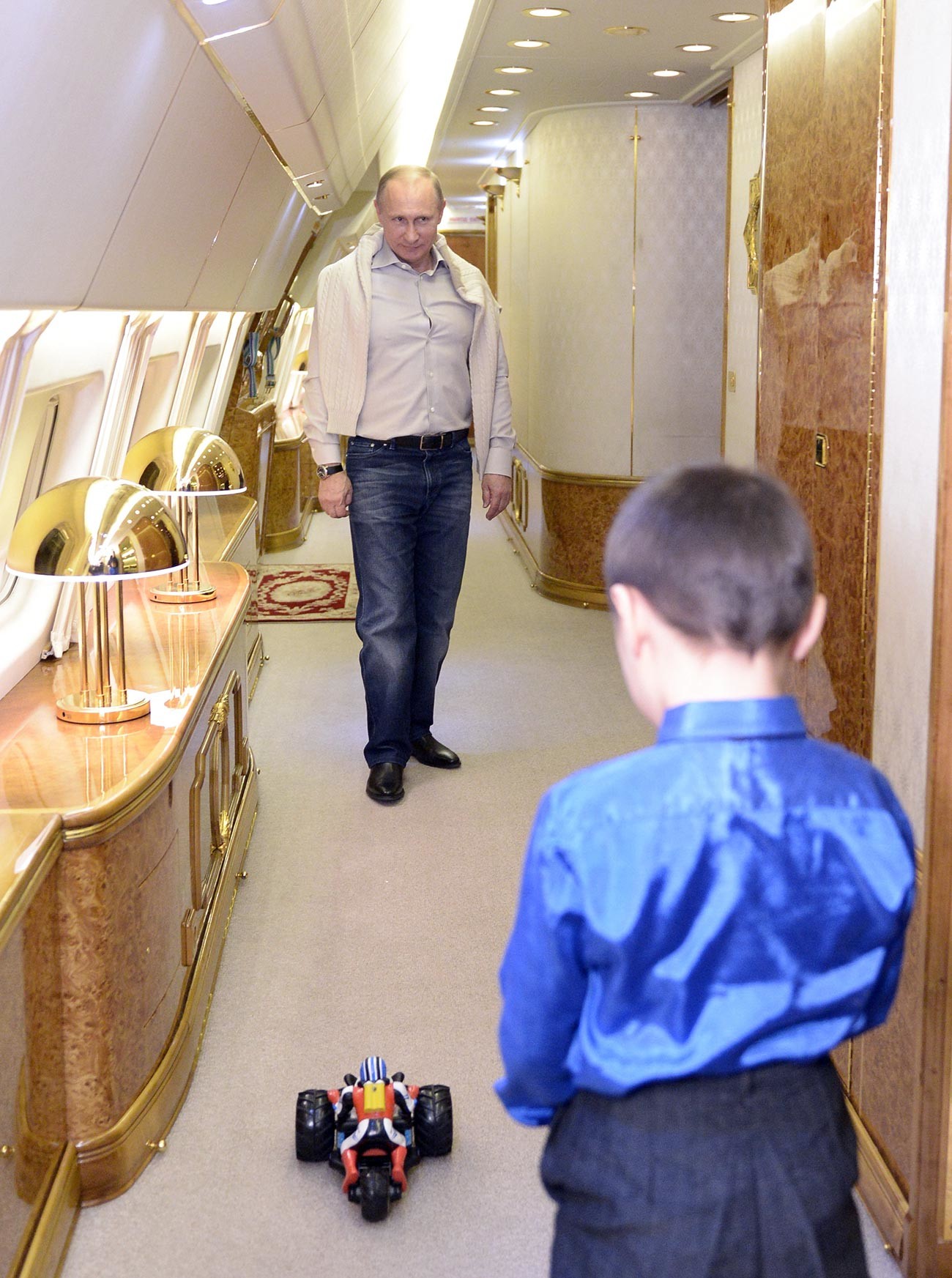 Vladimir Putin and the son of Bair Banzaraktsayev, the military man who died taking part in the rescue effort during the flood in the Far East of Russia.

At first sight, there is nothing to distinguish the presidential aircraft from other planes in the Rossiya fleet, apart from a small Russian flag on its tail. On the inside, however, the plane is quite unique, meeting the highest standards in terms of communications and safety. These have earned it the nickname ‘Flying Kremlin’.

With its specialist communications capability, it can transmit encrypted messages from any altitude to any point on the globe using any channel of communication. The ‘PU’ in its name stands for punkt upravleniya [Russian for “command point”] and, among other things, it is fitted with the “nuclear button”. It is also equipped with radar, electronic, electro-optical and visual control. All the equipment is duplicated to cope with unexpected contingencies - some of it several times over. Experts in on-board equipment from the Austrian aviation manufacturer Diamond Aircraft Industrie were responsible for the layout of the interior accommodation and installation of equipment. At the same time, the precise details of what is installed on board is a state secret. Much more is known about the “insides” of Aircraft No. 1 when it comes to the passenger amenities. 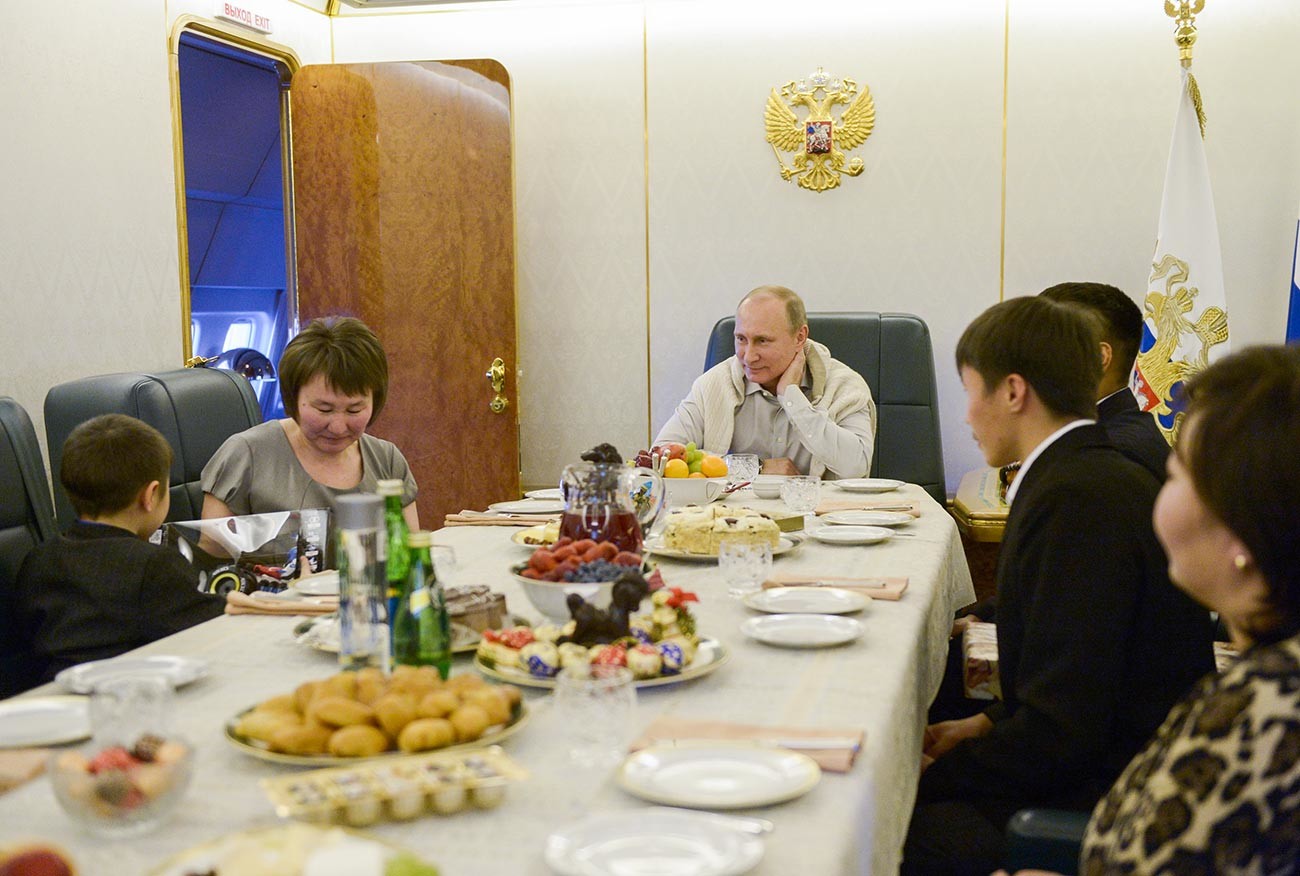 Vladimir Putin with the family of Bair Banzaraktsaev, the military man who died taking part in the rescue effort during the flood in the Far East of Russia.

Living and working conditions inside the airliner really are no worse than in the Kremlin: On board are the president’s private office, several meeting rooms, a conference room, a relaxation room for the president, a guest lounge, a mini gym, a dining room, a bar, showers and a separate medical unit with facilities for resuscitation and emergency treatment. All the decor is in light tones, with highlights in the colors of the Russian tricolor and the interiors are adorned with embroidered panels based on historical prints, made by craftsmen of the Pavlovo Posad Shawl Manufactory.

The appearance of the interior was revealed in 2018, when Putin allowed a Bashkirian schoolboy named Arslan Kaypkulov to come on board for a tour. He had been dreaming of making a video about the aircraft.

In practice, the name ‘Aircraft No. 1’ does not refer to a single plane. There are always several similar reserve aircraft: carrying guards, assistants and journalists. The reserve aircraft follows the “main” one at an interval of 15-20 minutes. If the main aircraft develops a fault and has to land, the job of the reserve aircraft is to pick up the passengers and continue to fly them to their destination. 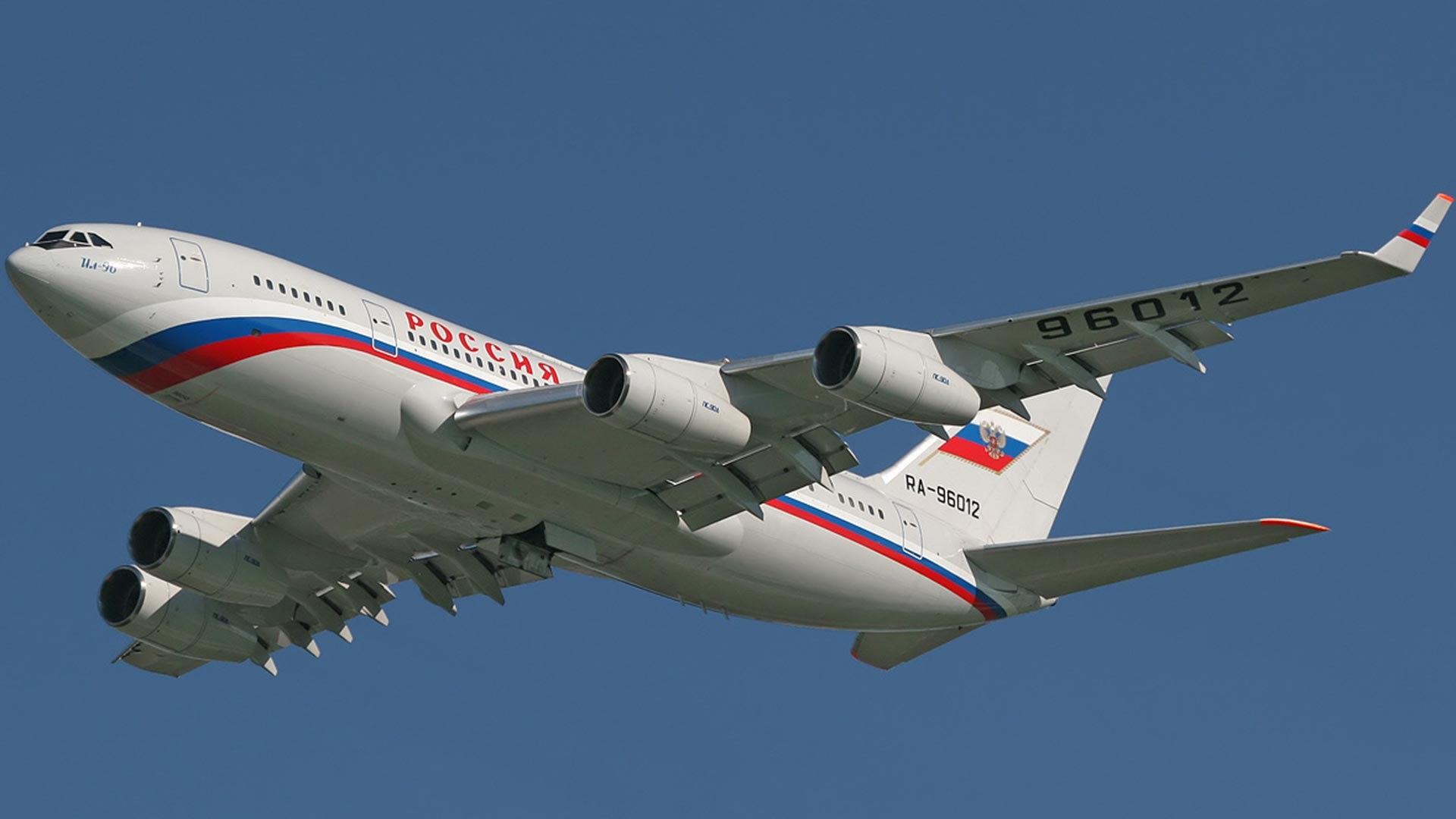 Since 1977, the rule has been to send out not one reserve aircraft, but two (a reserve for the reserve). This rule was imposed after U.S. President Richard Nixon flew to Moscow and Leonid Brezhnev decided to take him for a flight on an Il-62 (the plane the head of state used in those days). The passengers took their seats, but one of the engines failed to start. They transferred to the reserve aircraft, but this one was not able to take off either. 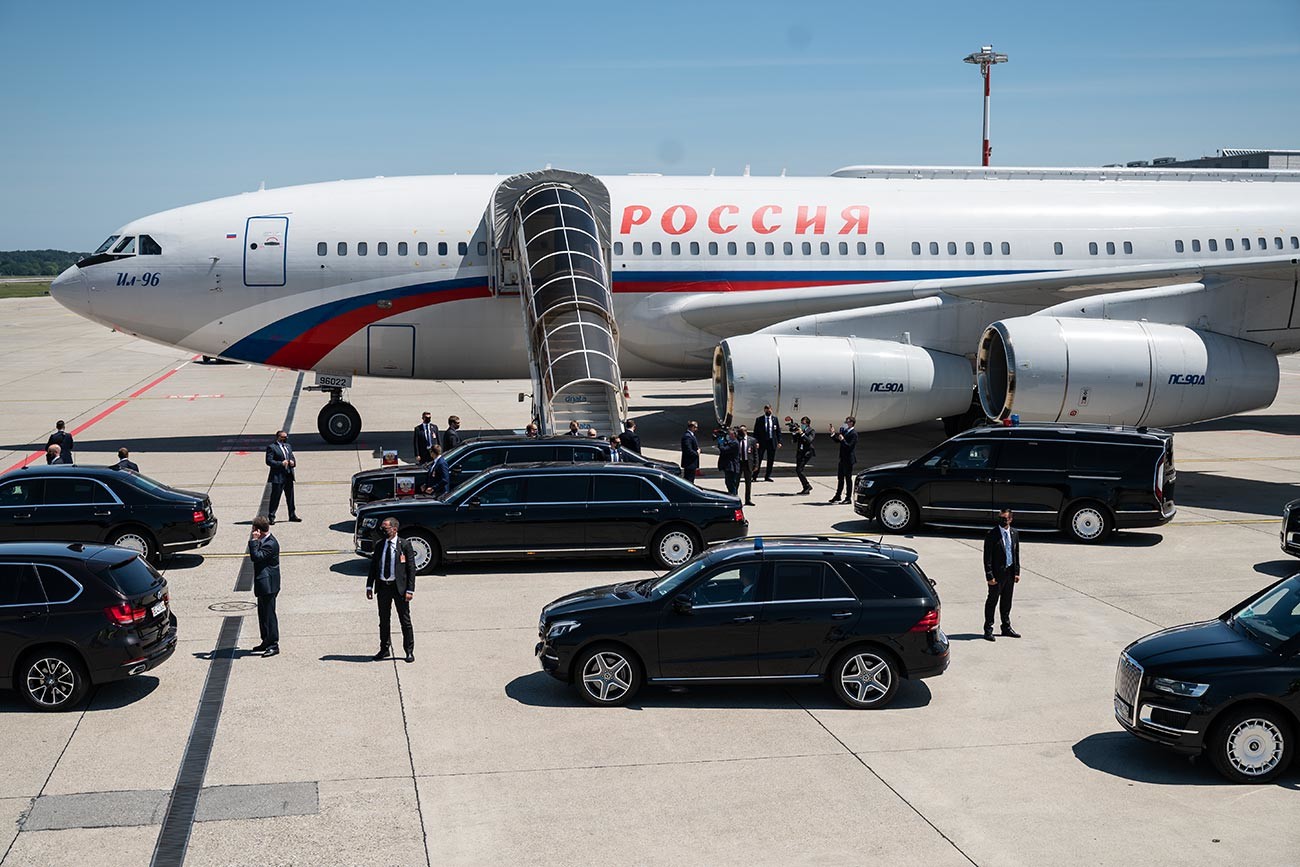 Furthermore, all the “president’s planes” are in service for no more than 15 years after coming off the production line. At the end of this operating period, the airliners are handed over for the use of other government agencies and the president is put on a newer plane.

The presidential aircraft has to meet a number of strict requirements, the principal one of which is that everything has to work. This applies both to the planes themselves and to the personnel. “Even if a single seat does not recline, we frequently change the plane and do not send it out. Or we close off a particular row to stop anyone sitting there,” says Putin’s former chief pilot, Konstantin Tereshchenko. While all other airlines assign deferred status to certain defects (those not presenting a safety threat) and the aircraft in question is allowed to continue on its way, this is not done for the presidential aircraft. 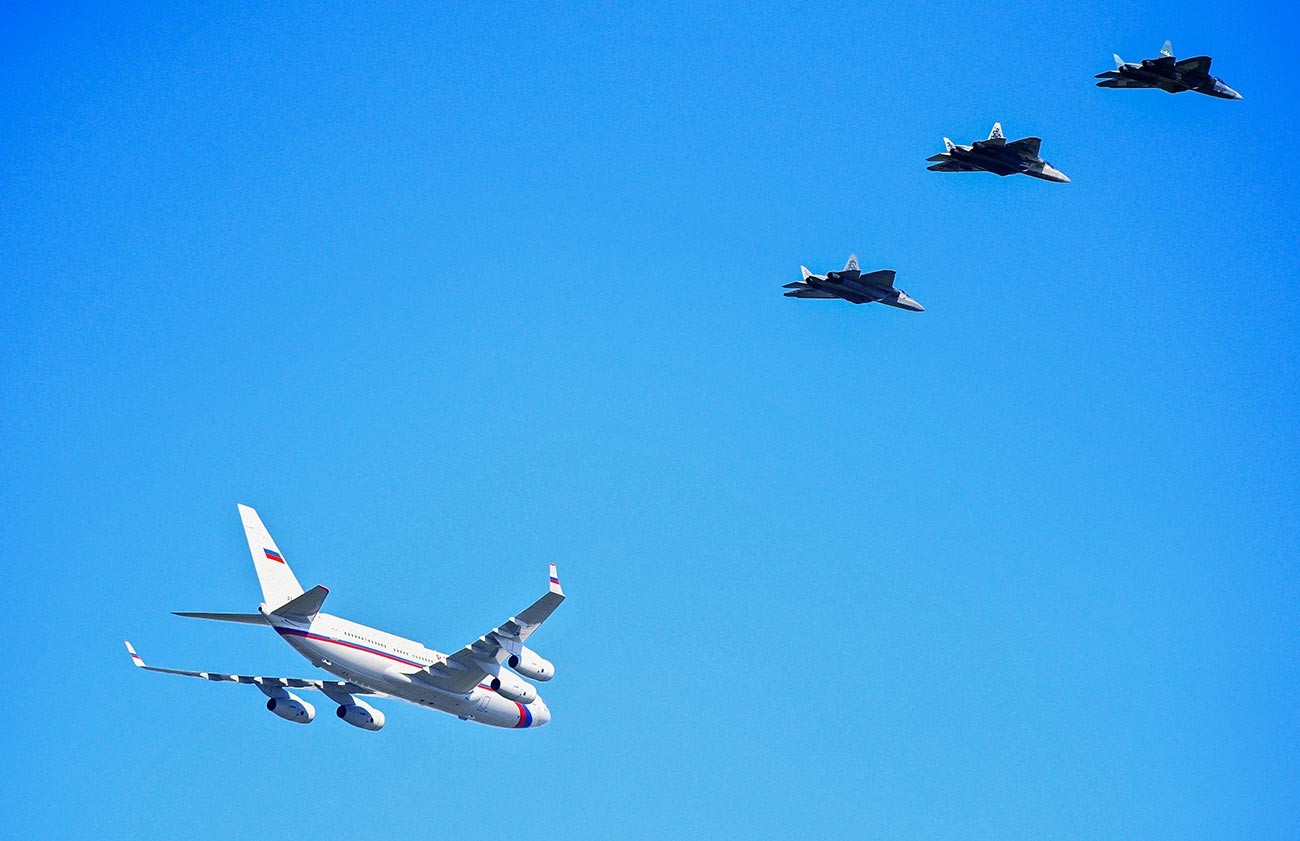 Su-57 fighters are escorting the plane of Russian President Vladimir Putin on its way to Akhtubinsk.

Another hard and fast rule is that it should be able to operate completely autonomously, like a submarine. This means that servicing and repair of ‘Aircraft No. 1’ is carried out exclusively by in-house technical personnel and no other persons can touch it at other airports. 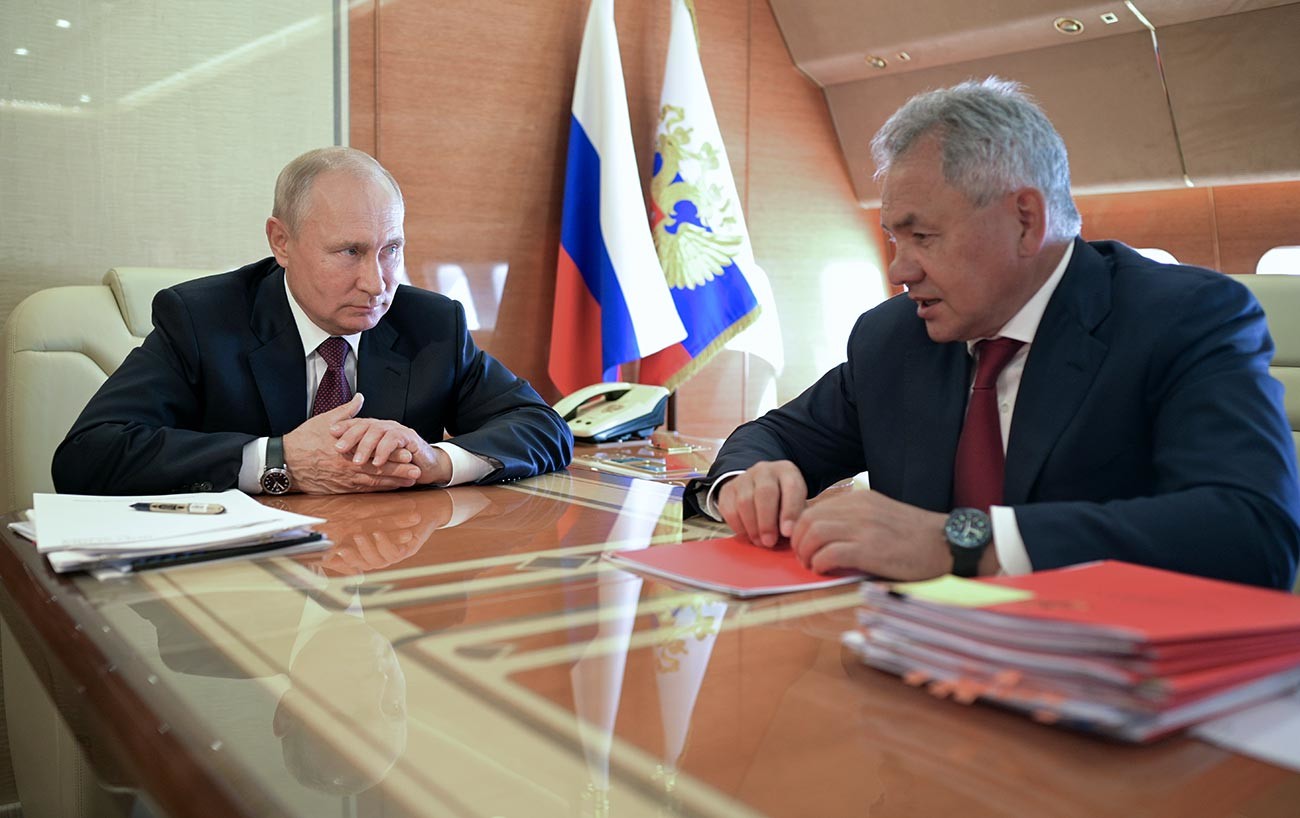 Vladimir Putin and Russian Defense Minister Sergei Shoigu are meeting on board. 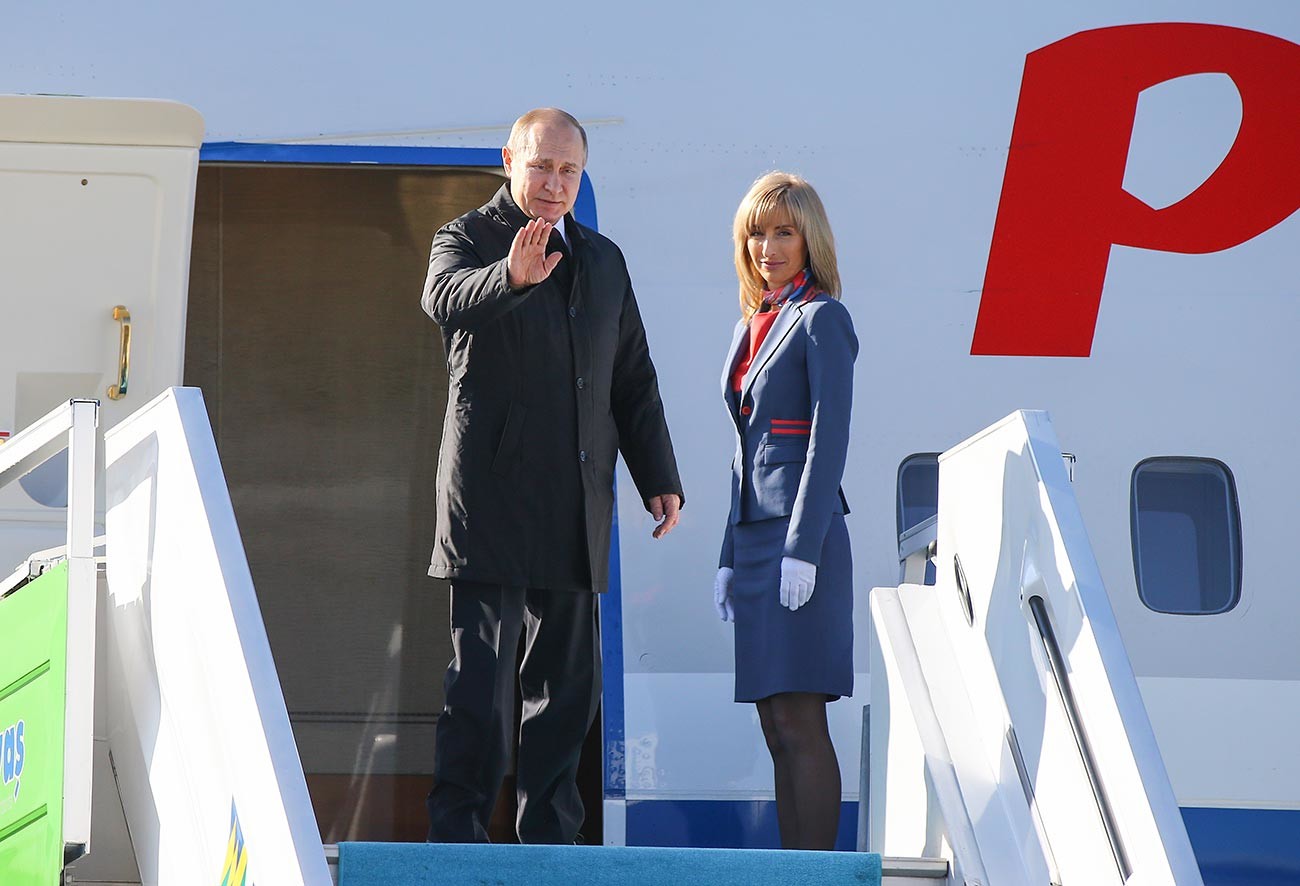 Vladimir Putin boards the plane at Esenboga International Airport as he leaves Ankara after attending the Turkey-Russia-Iran Tripartite summit.

The traffic control personnel are the same as for commercial civil flights. The only difference is that for the main aircraft the flight levels and air corridors are freed up and set intervals are observed in relation to other aircraft both front and rear. The same happens for the reserve aircraft, but in a slightly more limited way. According to Tereshchenko, whereas in former years the main aircraft’s separation from other aircraft could have been two hours, these days this separation has been reduced severalfold.