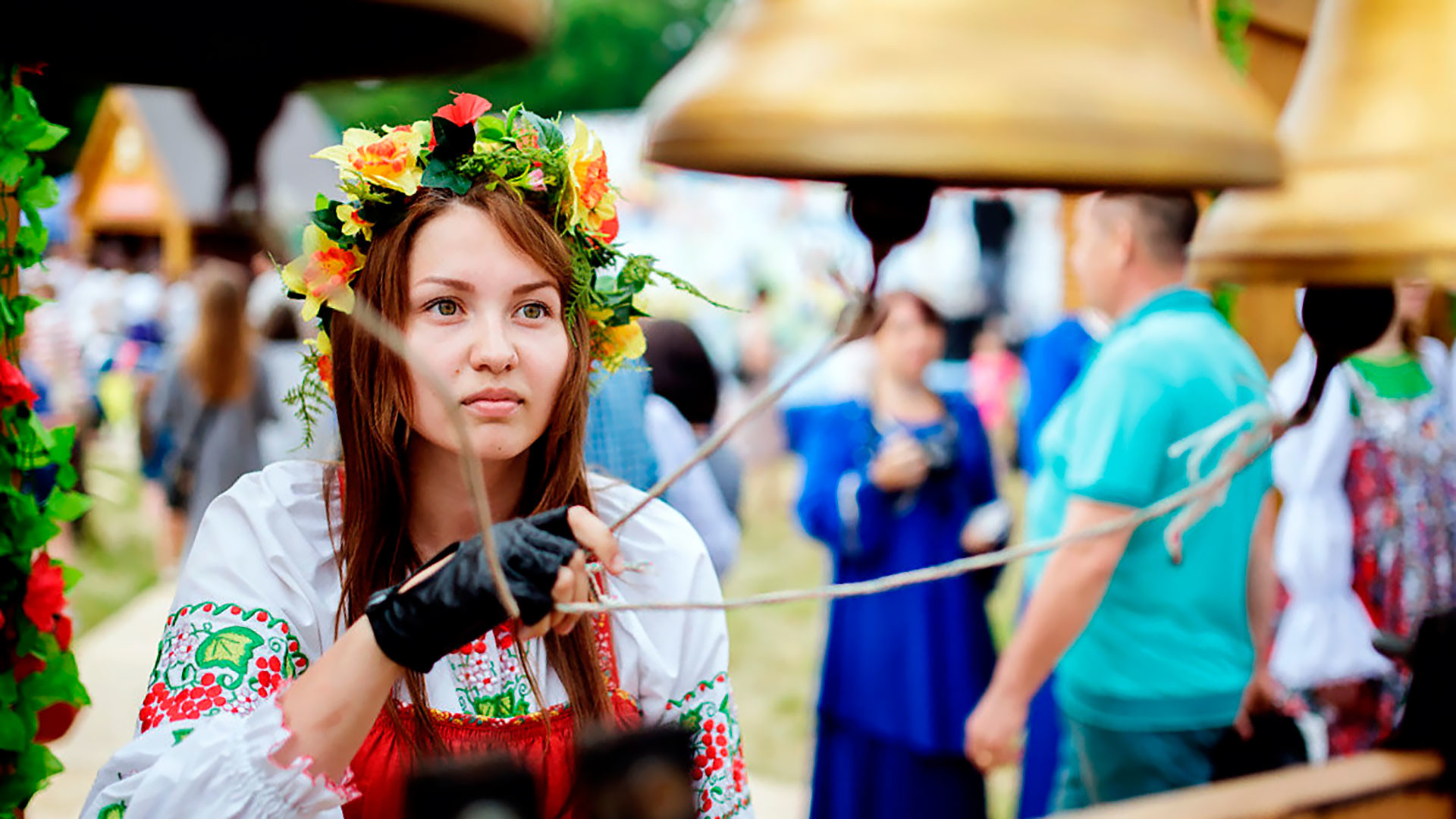 Ksenia Plekhanova Archive
A growing number of girls in Russian Orthodox families learn to be bell ringers from a young age, operating bells weighing tons. Furthermore, it turns out they can be just as good at it as experienced male ringers. How do they do it?

A young woman in a black skirt and a headscarf is climbing up the wooden stairs of a church tower, briskly managing several flights of stairs, while I am struggling to keep up with her. She enters a room with brick walls and a small bell tower, grabs six ropes tied to the bells and starts ringing them.

There is a pair of construction headphones lying on the bench, and I instantly regret not having put them on right away. The loud ringing makes my head spin, and it takes me at least a minute to get used to the peal and begin to hear a seemingly familiar, but long-forgotten melody in it. The young woman ringing the bells does not need headphones or earplugs. 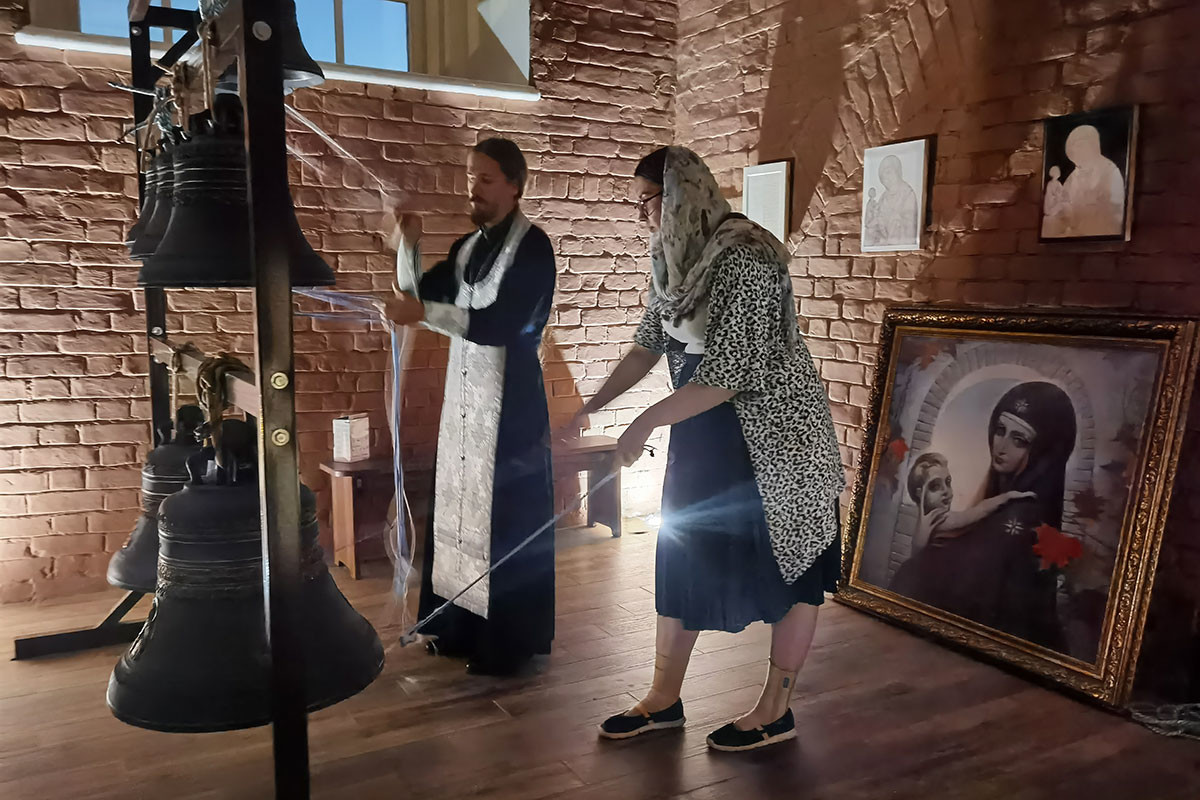 “I'm fine with this, my ears have long got used to it,” she says with a laugh, puts several ropes connected to the smallest bells in my palm and continues to ring them, controlling my hand. After just 10 seconds, the effort makes my arm go numb from the wrist to the elbow, the ringing I produce sounds terrible. The next one to try her hand at bell ringing is a girl, no older than five, who followed us to the bell tower - even she manages to produce a much more melodic sound.

Ksenia Plekhanova, 27, has been a bell ringer for 14 years, and she is far from the only female bell ringer in Russia. She says half of the bell ringers she knows are women, and in the past decade, a third of the participants in Russian bell ringing festivals have been female. This observation is borne out by women bell ringers from other parts of Russia. Many girls choose this pastime in childhood and are ready to devote their whole life to it.

Learning to be a bell ringer and the first exams

Boys and girls begin to learn bell ringing from school age in Sunday schools or in special schools of church bell ringers. Having a musical education is not a requirement, the main thing is to have a sense of rhythm and to want to learn. In the classroom, future bell ringers mainly reproduce the melodies that their mentors have taught them and, building on those, begin to improvise their own. Also, future bell ringers are taught the theory (including lectures on different types of bells) and learn how to ring in morning and evening church services and their different stages. The curriculum also covers ringing for weddings and funerals. Training can be either free or not and can last from two months to two years - there are no uniform standards. 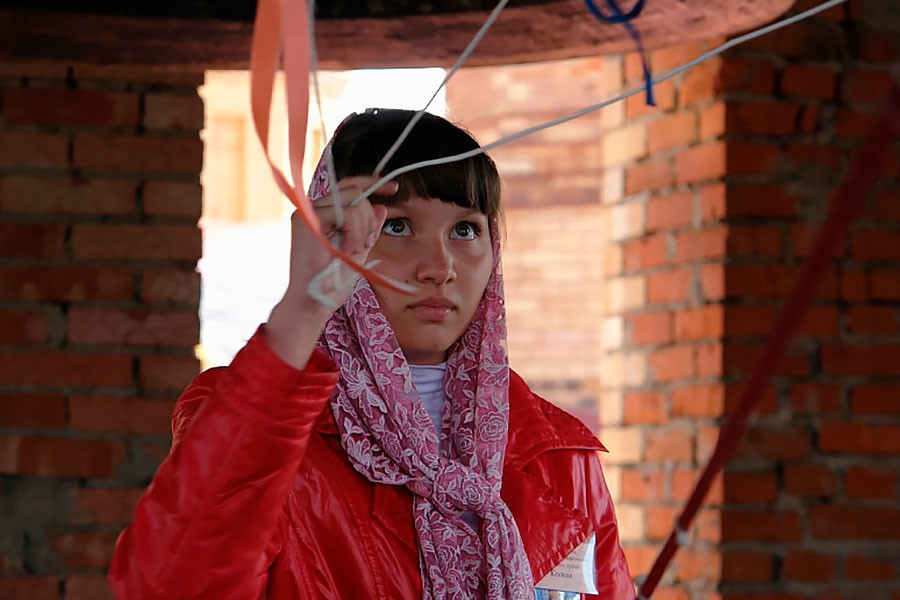 Ksenia Plekhanova was born into a family of Orthodox believers in a small village near the settlement of Alekseevskoye. From early childhood, she and her parents attended the local Church of the Resurrection of Christ and the Alekseevskoye Chimes festival: it is at festivals like this that bell ringers from all over Russia give concerts on belfries and conduct master classes. While studying at a Sunday school in 2008, at the age of 13, Ksenia tried ringing a bell for the first time – she was shown the ropes by boys who already knew how to do it.

“Although my mother is an accordion player, I have never had an ear for music or a singing voice, only a sense of rhythm. Other bell ringers were looking askance at me, saying: What is a girl without an ear for music doing here? Only my mother and grandmother believed in me. But I somehow managed to catch and reproduce the beginning of a chime (which the smallest bells are used for - ed.) from the first attempt, which few people can usually do,” Ksenia recalls.

Since then, Ksenia began to learn how to ring bells and spend a lot of time at the bell tower.

She says she could spend days and nights there, which even became a source of tension with her parents, who wanted to see their daughter at home more often. Ksenia easily managed to combine her hobby with her studies, although she was teased and nicknamed a “monk" at school. 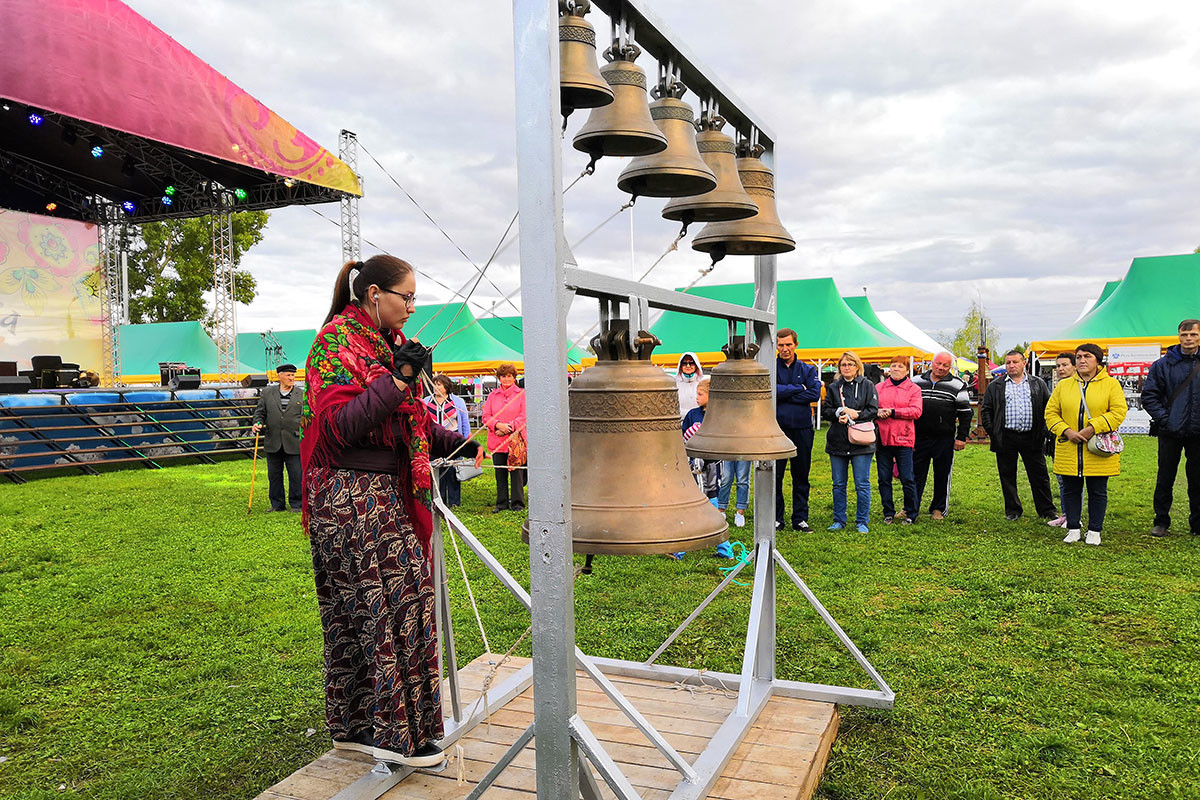 Already in 2010 she performed at one of the Alekseevskoye Chimes bell ringing festivals and in 2011 she began to teach bell ringing to other children. Also, Ksenia passed the bell ringer exam.

“During training, we were given six alto bells (middle bells - ed.) and two pedals, on which one could beautifully play any melody. When I was taking the exam, I was given just three small and one big bell and was told: 'Ring'. [That combination of bells was not enough to produce a beautiful chime - ed.] But I coped. Since then, every time I climbed the bell tower, I felt morally stronger than everyone else. And I was telling myself: 'I can do it, I can do anything',” Ksenia recalls.

Crisis of faith and a search for the right church

That same year, 2012, Ksenia's grandmother died, after which the girl suffered a crisis of faith. At the insistence of her parents, she entered the Kazan Federal University to study landscape design and stopped practising bell ringing for a while.

“Over time, I began to experience something of a withdrawal syndrome. When I heard bell ringing nearby, I couldn't get any peace, thinking: how come it is not me ringing those bells? I soon realized that I had made a mistake and returned,” she says. 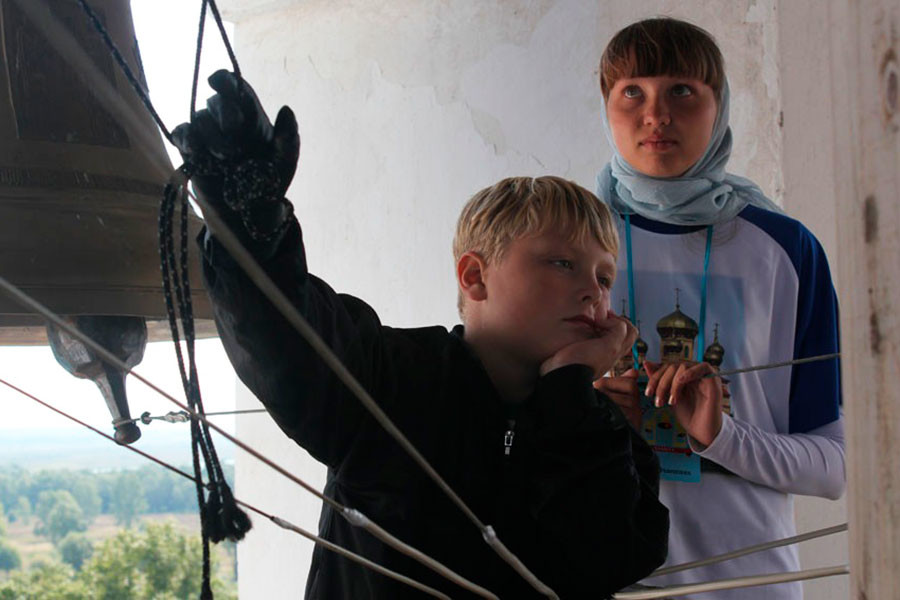 Today, Ksenia works as a senior bell ringer in the Church of St. Sergius of Radonezh at the Lozhkin Almshouse in the center of Kazan: in 2021, it had its bells replaced with new ones.

“The moment they were brought and I was allowed to ring them, I flew up the bell tower stairs faster than anyone else. When I rang them for the first time, I was overcome with emotion and had goose bumps for not less than 10 minutes. Now I have a renewed desire to go to church,” she says.

Following in Ksenia's footsteps, two best friends, 15-year-old Veronika and 13-year-old Yekaterina are studying bell ringing at the Alekseevskoye church. Both girls, whose parents are also believers, have attended Sunday school from an early childhood. In 2020, Veronika joined the recently opened bell ringing courses at the church, and Yekaterina soon followed suit. 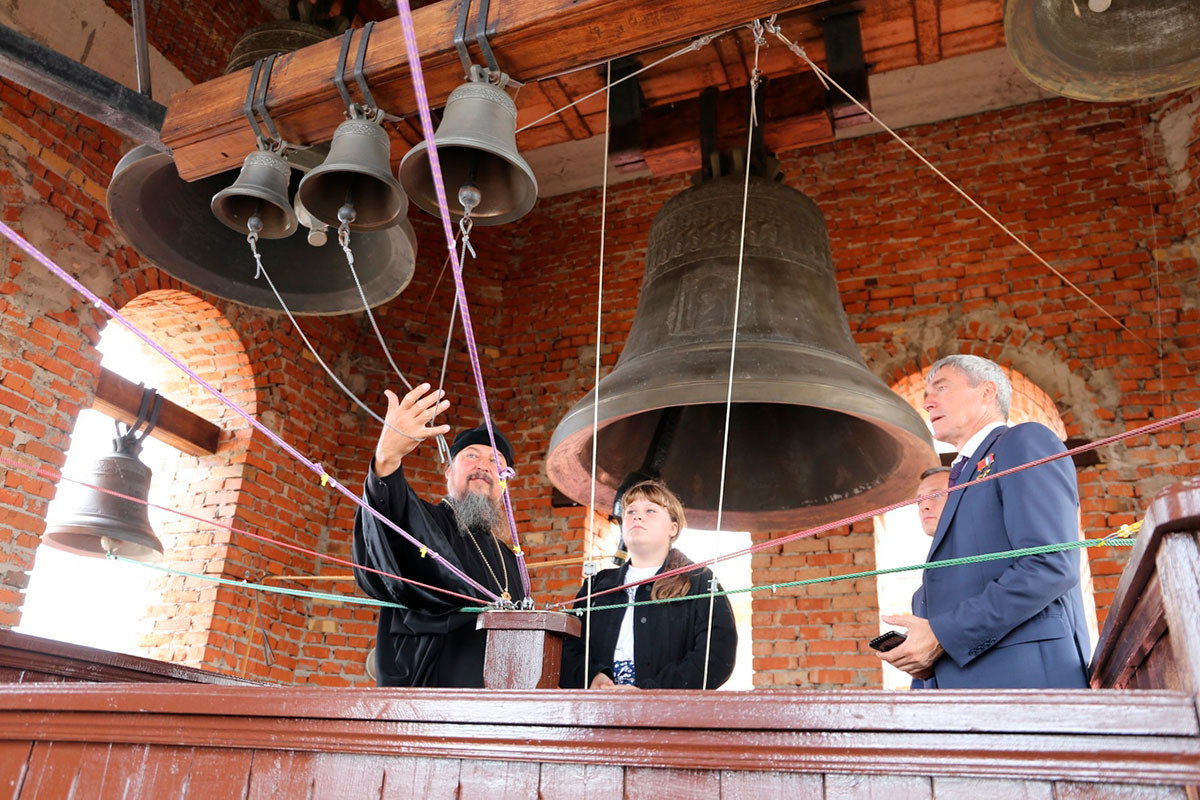 “To begin with, they just showed me what the belfry looks like. At first I learned to ring on a small portable belfry, we learned small short chimes. At present I know only a couple of chimes and know how to ring two bells. It was much more difficult to learn on the big bell tower, but I like it better - the ringing calms me down and cleanses me, as it were, it is so beautiful. Also, I like just to sit at the bell tower and look at the surrounding view,” says Veronika.

Yekaterina feels the same. She also loves sitting at the bell tower and watching people hurrying to work or going about their business - although sometimes she just sits there watching TikTok videos on her phone. She does not tell everyone about her bell ringing hobby as some of her classmates do not understand it.

There are still more men taking part in bell ringing festivals, but girls have their own advantages in this field, says Leonid Lebedev, the senior bell ringer at the Alekseevskoye church.

“I am now teaching bell ringing to three girls. There are more boys at festivals, but girls work harder, they clearly want to learn. Take Veronika for example, I never had to induce her at all, she herself expressed a desire to learn - perhaps, looking at the boys. She is doing better than Katya, but Katya will catch up soon too,” says Lebedev. 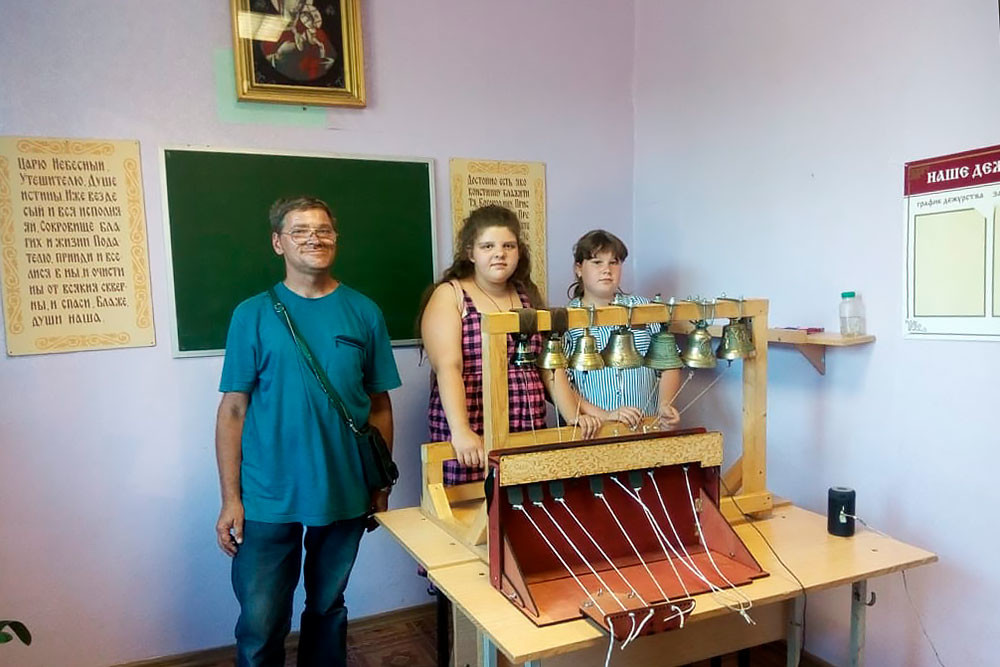 Ksenia Plekhanova says that although historically bell ringers in Russia were men, now there is no gender division in this field. The main barrier is the physical complexity of the process: girls give it up faster than boys if it becomes difficult for them to control the bells.

“Men produce a rougher ringing. And they manage to strike all the bells at once, which is hard for me. It's still a mystery to me how they do it,” Ksenia admits.

Some bell ringers, she says, learn to play dubstep on church bells for fun and talk about online bell ringing. Ksenia is wary of that - in her opinion, bell ringing is best enjoyed offline. 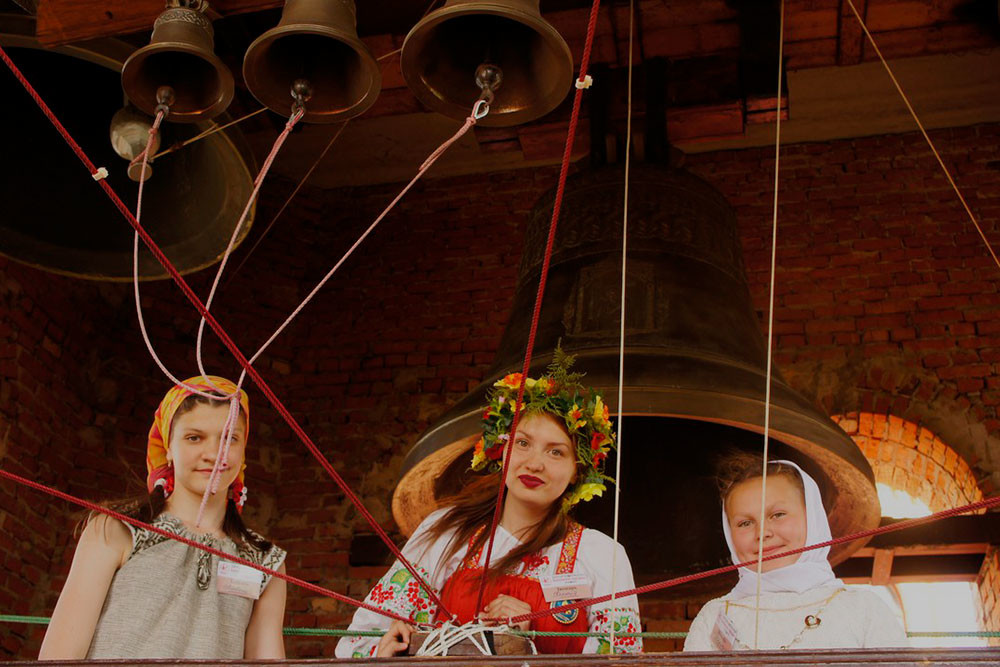 Ksenia says she has always preferred peals produced by female bell ringers, which are slower but more heartfelt.

“Some girls have every sound of the bells reflected on their faces, many channel the sound through their hearts and minds. For me it is so sacred that sometimes I don't even blink when I ring. I am very empathetic, so when I ring the bells I convey all these emotions, and I feel better afterwards. I go down, soulful and overwhelmed, and I feel good and calm,” Ksenia concludes.