No, Russia DID NOT have its ‘first royal wedding in 100 years’! 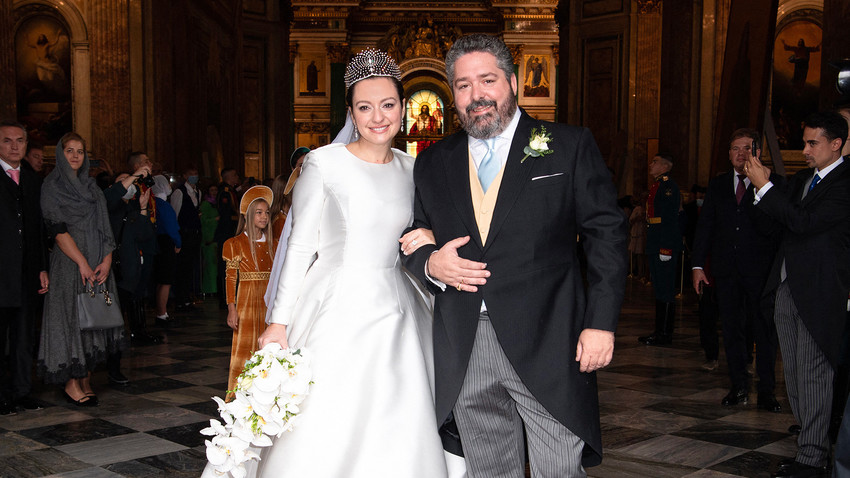 Legion Media
Media outlets around the world are trumpeting the "wedding of the century" of George Romanov and Rebecca Bettarini. We explain why this wedding has nothing to do with the Imperial House of Romanov.

Georgy Romanov and Rebecca (Victoria) Bettarini were married on October 1, 2021, in Saint Petersburg’s St. Isaac's Cathedral. The world and Russian media called this event "the first Romanov wedding in 100 years in Russia" and the couple was dubbed as the heirs to the Romanov Imperial House. But they are not.

“[The Russian] Imperial House ended its existence in 2007, when the last rightful and undisputed member of the Imperial family died in Montevideo. This was Princess Catherine Ioannovna (1915-2007), great-great-granddaughter of Emperor Nicholas I. After her death, the Russian Imperial House ceased to exist,” says Russian historian Evgeny Pchelov, candidate of sciences in history (Ph. D.) and one of the leading experts on the history of the Romanov dynasty.

However, there are still people who claim the right to be called “heirs of the Romanovs” and even dream of reviving the monarchy in Russia. It is through their efforts that the wedding held in St. Isaac’s Cathedral in St. Petersburg on October 1 was covered in the Russian and Western media as “the wedding of the heir to the Russian throne”.

Why does the imperial throne in Russia no longer exist?

“I very much love a Russia country [sic],” Rebecca Bettarini said in pidgin Russian in an interview after her betrothal to Georgy Romanov, held at the Ipatiev Monastery in Kostroma. “We hope for visiting more Russia together [sic],” Georgy Mikhailovich added, also in pidgin Russian.

These phrases in broken Russian are not surprising, since the newlyweds were brought up in families that do not speak Russian. Despite this, many Russian and foreign media correspondents titled them “majesties” during the couple’s visit to Russia and Georgy Mikhailovich was often referred to as ‘Grand Duke’ and ‘heir’. 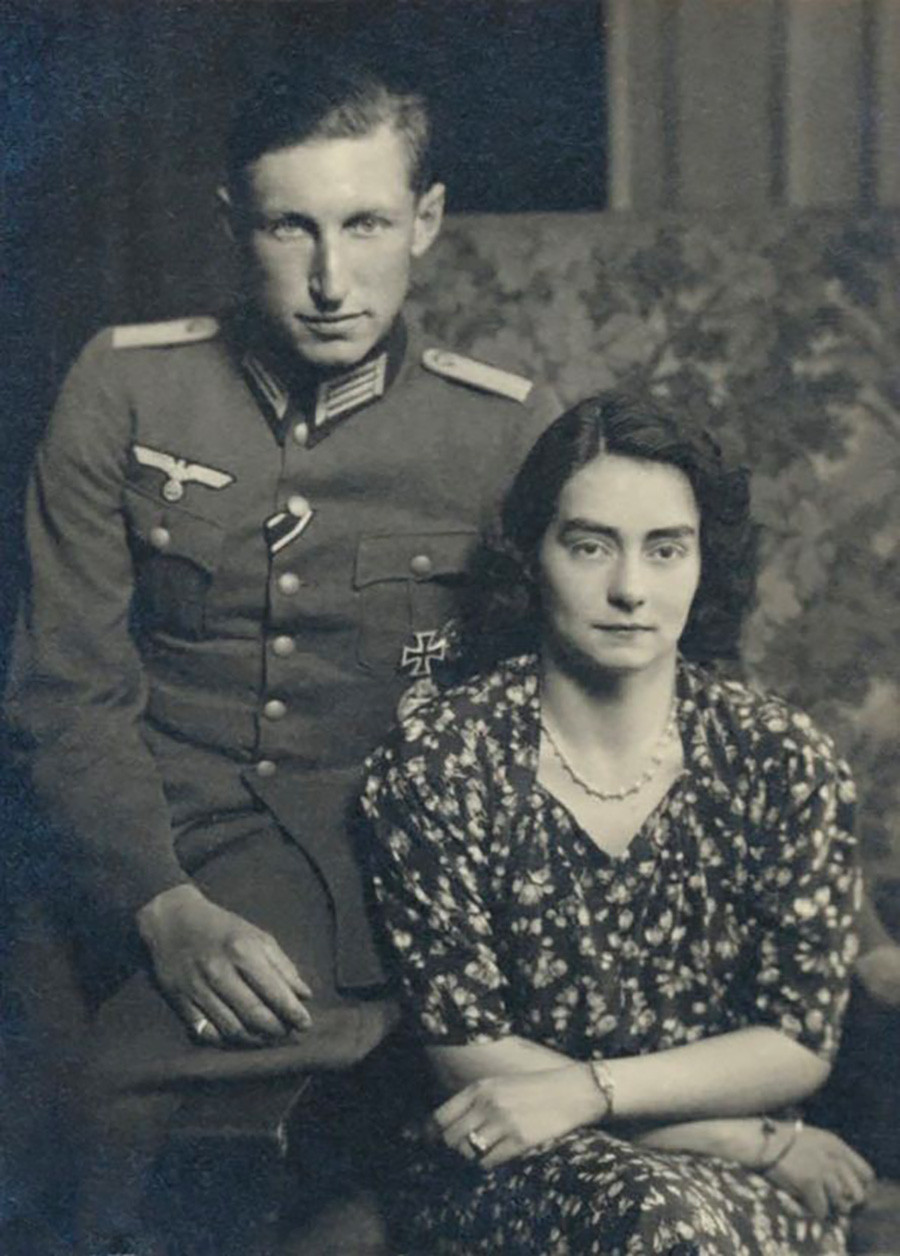 Georgy and his mother Maria Vladimirovna (b. 1953) received Russian citizenship in 1991 by decision of then-President Boris Yeltsin. Prior to obtaining a Russian passport, George’s last name was Hohenzollern, as he is a descendant of the Prussian Dynastic house, the son of Prince Franz Wilhelm of Prussia (b. 1943). His great-great-grandfather, German Emperor Wilhelm II (1859-1941), had once declared war on the Russian Empire in World War I. His paternal grandfather, Prince Karl Franz of Prussia (1916-1975), served in the Wehrmacht during World War II and was awarded the Iron Cross.

Alexander Zakatov, director of the office of the non-profit organization that calls itself the ‘Russian Imperial House’ (an organization of the descendants of Nicholas II’s cousin Kirill Vladimirovich (1886-1938), to which Georgy Mikhailovich and his mother Maria Vladimirovna belong), said in an interview to ‘Rossiya 24’ TV channel: “The succession continues in the sense that if [Russian] people ever want to restore monarchy, they can do so in accordance with all the traditions, all the historical path.” However, it is the tradition that is the biggest problem here. 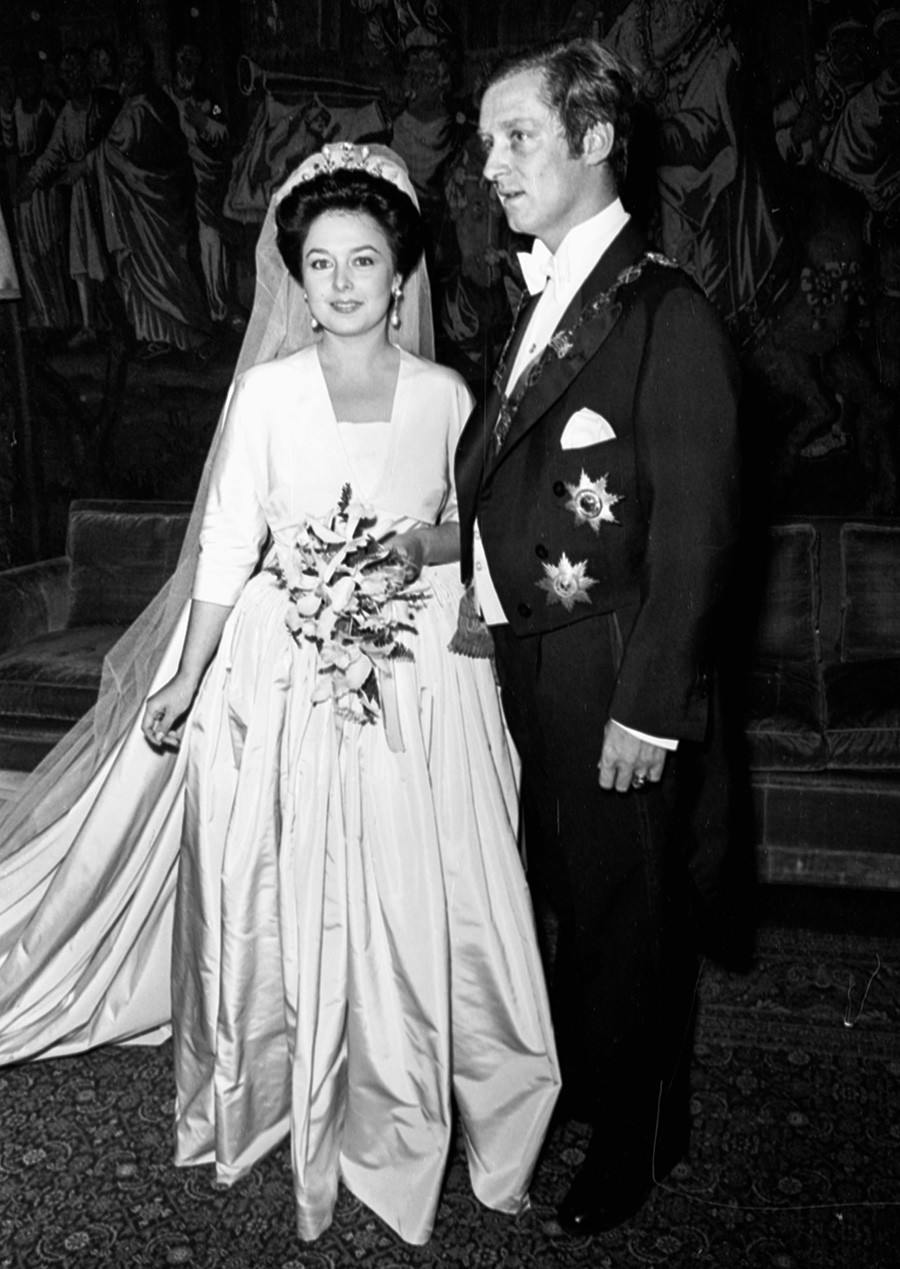 Ivan Matveev, a historian of the Romanov dynasty, notes that there are no longer any heirs to the throne: “All of this is history. We must now study it, analyze it – but it is already the past.” Indeed, neither the 1797 Pauline Laws that defined the succession to the throne, nor other laws of the Russian Empire have had legal force for over 100 years.

In addition, on March 2, 1917, Emperor Nicholas II abdicated in favor of his brother, Grand Duke Mikhail Alexandrovich (1878-1918). The next day, after a consultation with his entourage, Mikhail Alexandrovich signed the act of non-acceptance of the throne. According to this document, the Romanov dynasty could be restored only after a Constituent Assembly had been formed, which would approve the restoration of the monarchy. On March 4, 1917, power in Russia passed to the Provisional Government. Although the Constituent Assembly was subsequently formed, no decisions were made by it to restore the monarchy and power in the country passed to the Bolsheviks, led by Vladimir Lenin. The concept of the “imperial throne”, therefore, has not existed in Russia since March 3, 1917. 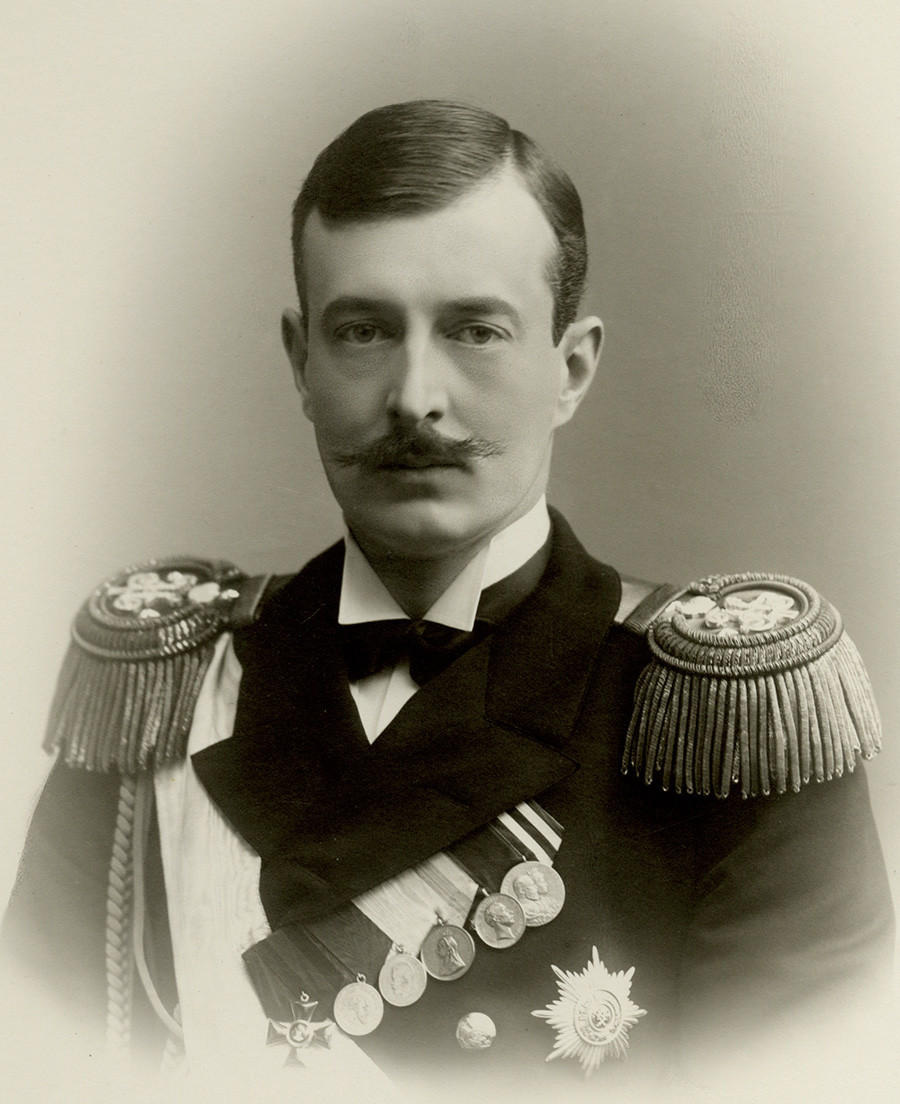 Why, then, does Georgy Mikhailovich title himself Grand Duke and heir to the throne? His mother, Maria Vladimirovna, is the granddaughter of Grand Duke Kirill Vladimirovich, a cousin of Nicholas II, who, in February 1917, supported the revolution by wearing a red bow and who personally placed the Imperial Guards’ Corp under his command at the disposal of Mikhail Rodzianko, Chairman of the State Duma. Subsequently, the sailors of the Imperial Guards’ Corp occupied Tsarskoselsky and Nikolayevsky railway stations to prevent the troops loyal to Nicholas II from reaching the capital, thus indirectly accelerating the fall of the monarchy in Russia.

On August 31, 1924, more than seven years after the fall of the monarchy in Russia, Kirill declared himself Emperor of All Russia under the name of Kirill I. This claim was disputed by most of the surviving descendants of the Romanov dynasty at the time. In spite of this, Kirill’s son, Vladimir Kirillovich (1917-1992), while not declaring himself Emperor, did use the title ‘His Imperial Highness the Grand Duke’ and considered himself the head of the House of Romanov. 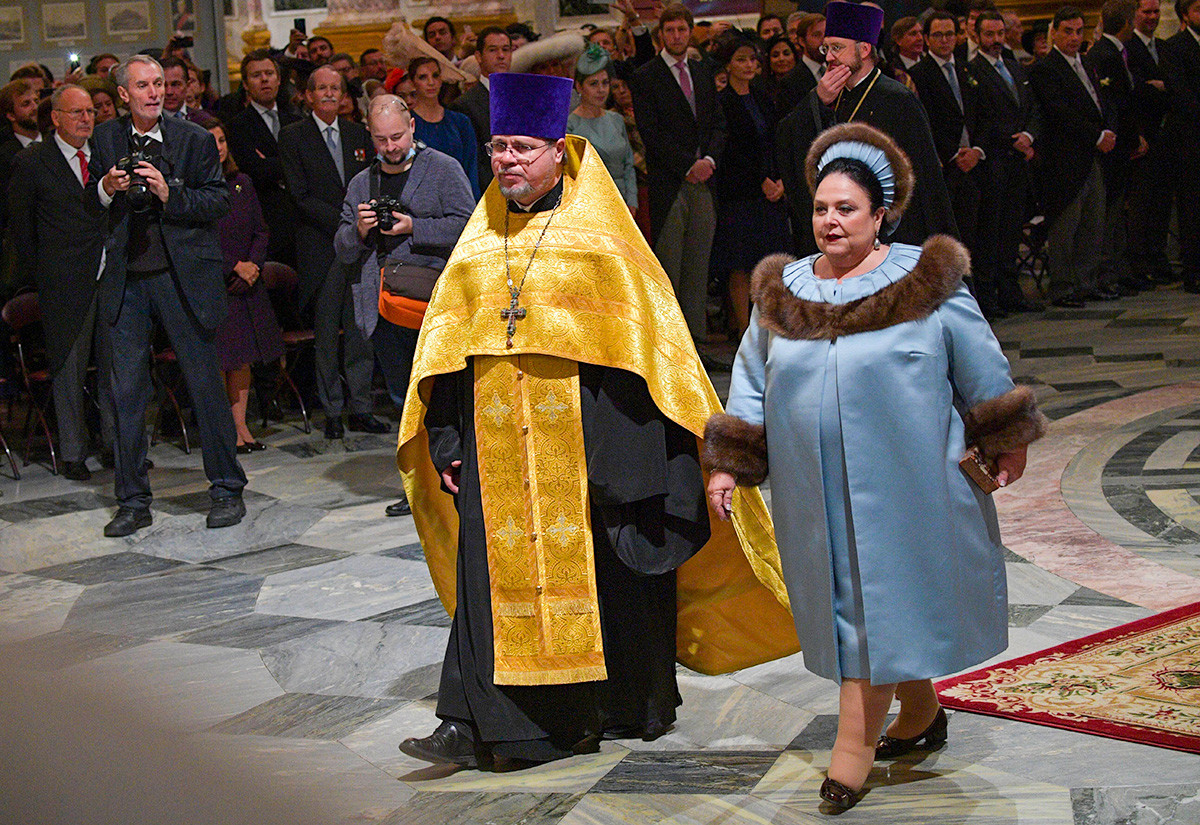 In 1948, Vladimir Kirillovich married Leonida Georgievna, the daughter of Prince Georgy Bagration-Mukhransky, a member of the Georgian dynasty, which, in the early 19th century, swore allegiance to the Russian Emperor and its members receiving titles of Russian princes. Then, Leonida and Georgy’s daughter, Maria Vladimirovna, married Prince Franz Wilhelm of Prussia in Madrid in 1976. In 1981, Georgy Mikhailovich was born of this marriage.

In 1989, Vladimir Kirillovich proclaimed his daughter Maria heir to the Russian throne. But, three years later, he passed away. After her father’s death, Maria Vladimirovna issued a “Manifesto on the Acceptance of Headship in the Imperial House of Russia”, in which she declared her son Georgy the heir. Maria Vladimirovna’s actions repeatedly aroused protest reactions from descendants of the Russian aristocracy. For example, Pyotr Sheremetev (b. 1931), a descendant of the famous count’s family living currently in France, bluntly stated in an interview to ‘Rossiya 24’: “She walks around visiting soirees with a ‘royal’ crown on her head! This is so ugly and vulgar! How can you go to the ball with a fake crown? These people, they’re simply fraudsters.”

“Wedding of the Century” 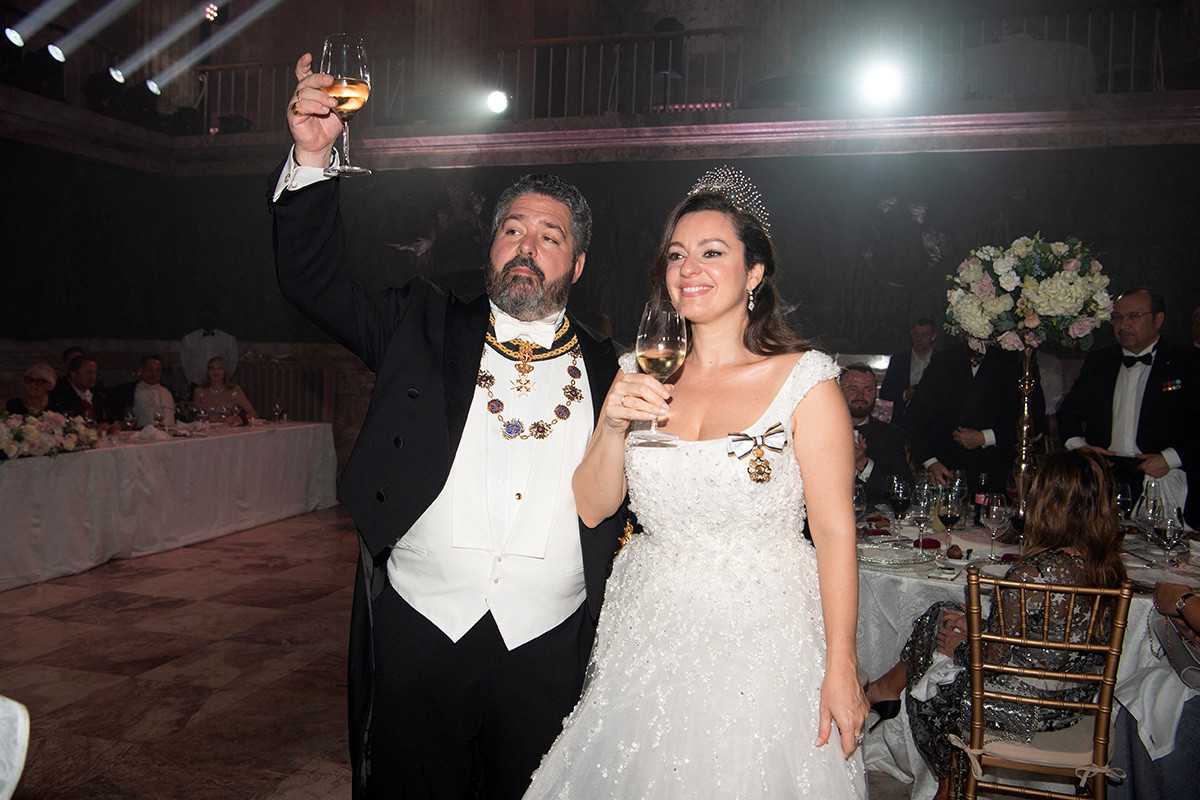 The newlyweds decorated with fake orders and awards of the non-existent dynasty.

The wedding of Georgy and Rebecca Bettarini took place in St. Isaac’s Cathedral in St. Petersburg on October 1. It was not necessary to get any special permits – a ceremony costs around 20 thousand rubles (approx. $300). Incidentally, the original Romanovs never married at St. Isaac’s Cathedral; weddings of members of the Imperial family usually took place at the Grand Church of the Winter Palace.

Articles about the wedding are replete with mistakes – above all, the words “the first marriage of the descendants of the Romanovs in their homeland in 120 years”. Even a publication like the New York Times could not avoid the embarrassing mistake. We already stated that Russia is not the motherland of these people. But, as Ivan Matveyev points out, even in the three years between the February Revolution of 1917 and the emigration of the last member of the Imperial Family in July 1920, six marriages were contracted by the Romanovs while still in Russia.

Moreover, George was not even the first of the Romanov descendants to marry in Russia after the collapse of the USSR. The first was technically Prince Dimitri Romanovich (1926-2016), who married Countess Dorrit Reventlow (b. 1942) in Kostroma on July 28, 1993. Prince Dimitri Romanovich himself was an opponent of the restoration of monarchy and believed that Russia “should have a democratically elected president”. 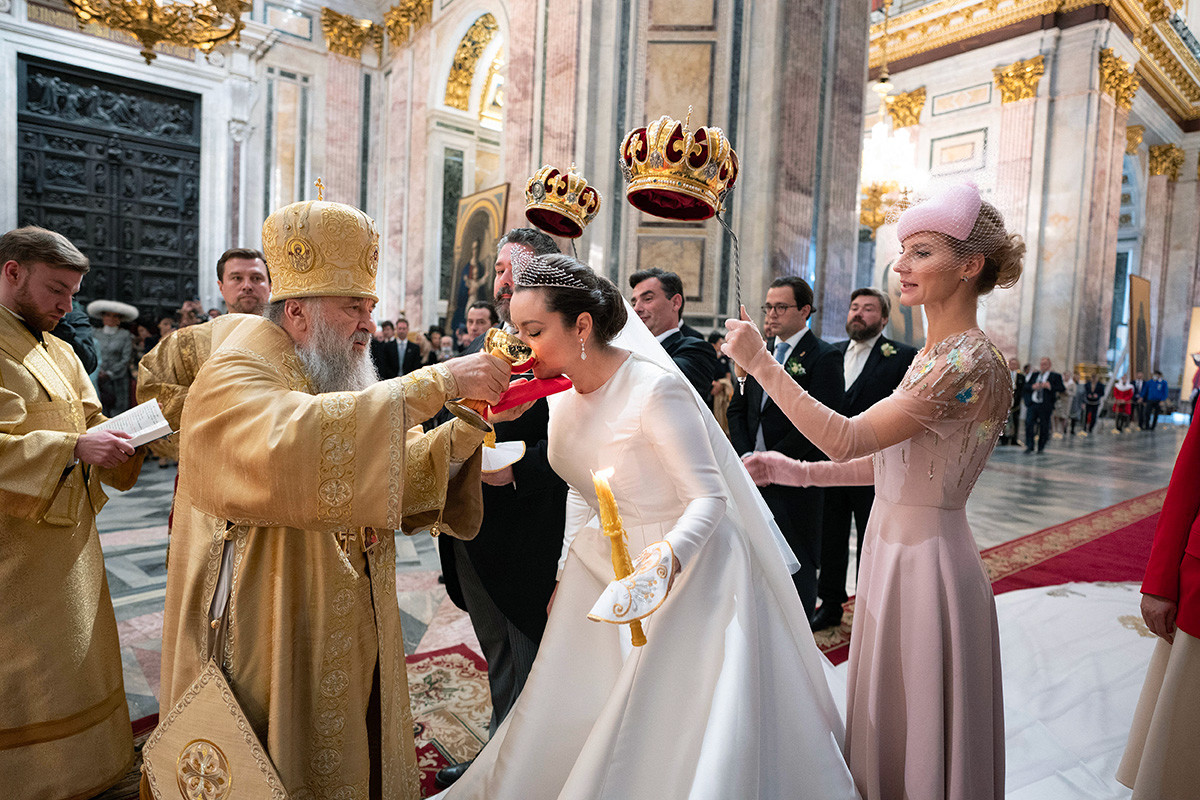 The newlyweds and their "best men," one of whom is actually a woman.

The wedding was not attended by any Russian officials – neither the Governor of St. Petersburg Alexander Beglov, nor Russian Foreign Ministry spokesperson Maria Zakharova. There was no congratulatory message from President Vladimir Putin. Not a single Russian TV channel aired the ceremony, not even ‘Tsargrad’, a patriotic Orthodox Christian channel whose founder, businessman Konstantin Malofeev, sympathizes with the Kirillovich branch and actively supports their cause.

The absence at the wedding of the groom's father, Prince Franz Wilhelm of Prussia, was also striking. It is even more revealing that during the wedding itself, the names of the bridegrooms were announced by the Orthodox priest using the usual formula: “Servant of God, Georgy and servant of God, Victoria,” without any titles; thus, it was demonstrated to the audience that the Russian Orthodox Church, which honors the memory of the holy martyrs Emperor Nicholas II Alexandrovich and his family, does not consider it possible to name the bridal couple with their nonexistent titles.

The bride's veil with the Russian Empire's emblem literally dragged across the floor...

Perhaps the most bizarre episode was the fact that the bride’s veil had... a double-headed eagle, the emblem of the Russian Empire, dragged along the floor of St. Isaac’s Cathedral during the ceremony. A clear affront to the dignity and memory of both the Russian Empire and the Romanov dynasty. At the after-ceremony buffet, the bride and the groom dashingly drank vodka to the camera flashes of the media present. 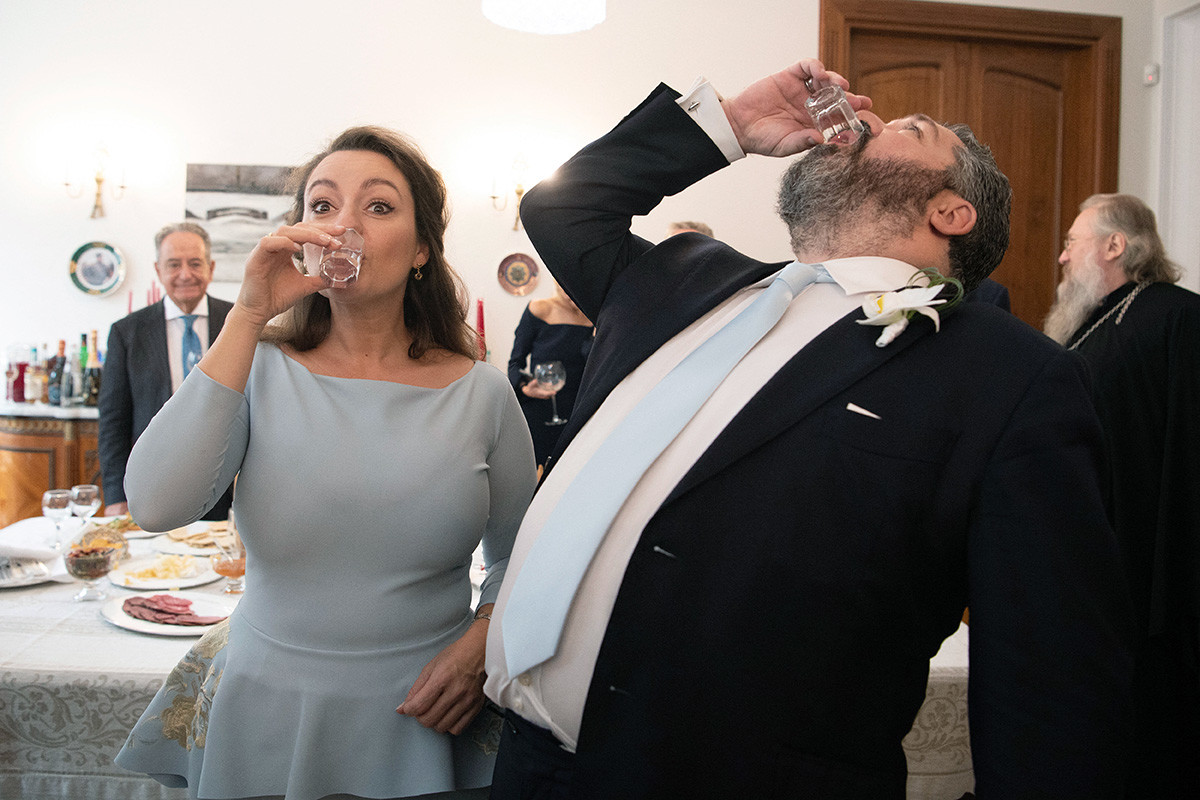 Nothing of this kind was or could be at any royal wedding in Russian history. A princess who drank vodka would have been immediately exposed as a member of the common people, while the prince could probably drink, but in a male circle and certainly not on the wedding day immediately after the ceremony. This small detail shows what scant knowledge the participants and organizers of the ceremony have of the traditions of Tsarist Russia, and where their obsessive desire to “be Russian” has taken them.

After the wedding, the couple was met by a guard of honor with raised sabers while exiting St. Isaac’s Cathedral. The ‘saber arch’ is a specific wedding tradition adopted among the British and American military men at their weddings. Georgy Mikhailovich did not serve in the army and does not have a military rank, which makes this ‘saber arch’ look ridiculous and offensive. As it was reported on October 6, Russian Defense Minister Sergei Shoigu has inflicted undisclosed non-judicial punishment on the military officials of the Western Military District, who sent military personnel to take part in the wedding ceremony. 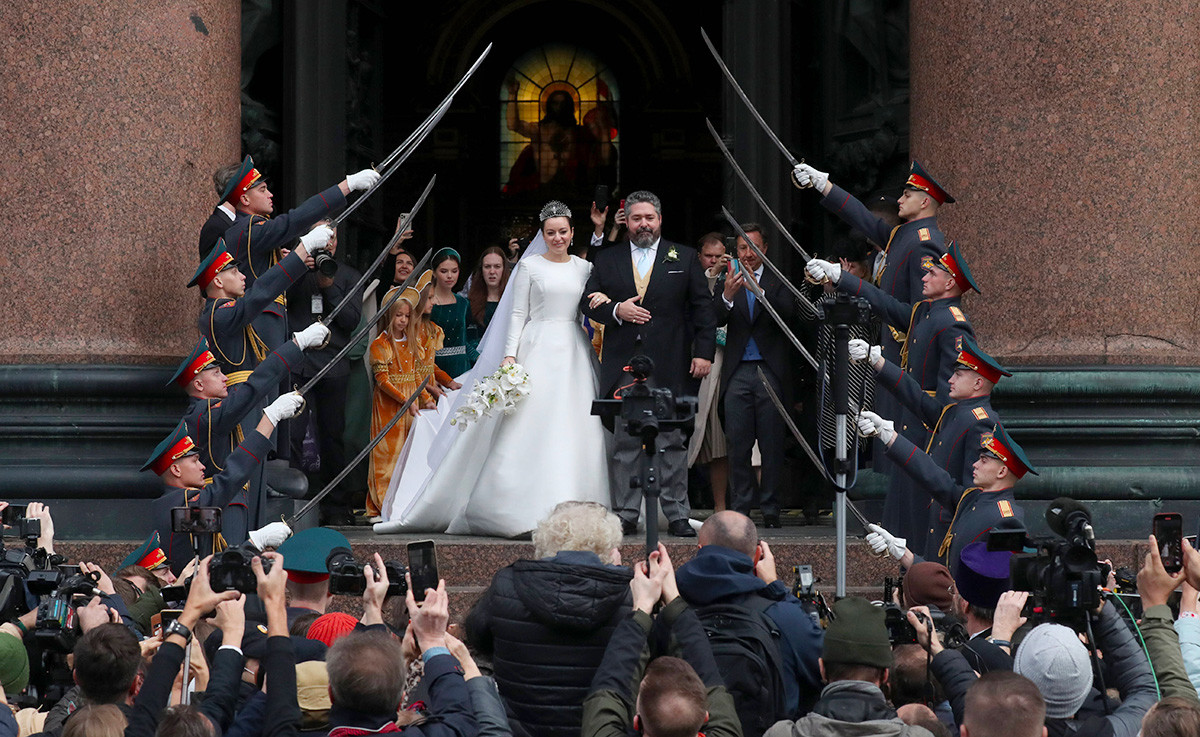 The newlyweds and the bizzare sabre arch.

The whole event can only be described as a farce, a bricolage of various wedding and monarchist traditions, forgotten and distorted even by the newlyweds, who consider themselves heirs to these traditions.

“The saddest thing,” historian Evgeny Pchelov points out, “is that these people are completely devoid of adequate self-esteem and only make everyone around them laugh at their ridiculous appearance and behavior. This way, they are indecently exposing the House of Romanov and the history of the Russian Empire, in whose name they try to speak.”

The author of the article holds a candidate degree (Ph. D.) in Russian history since 2010.