10 popular excuses Soviet people used to have a drink 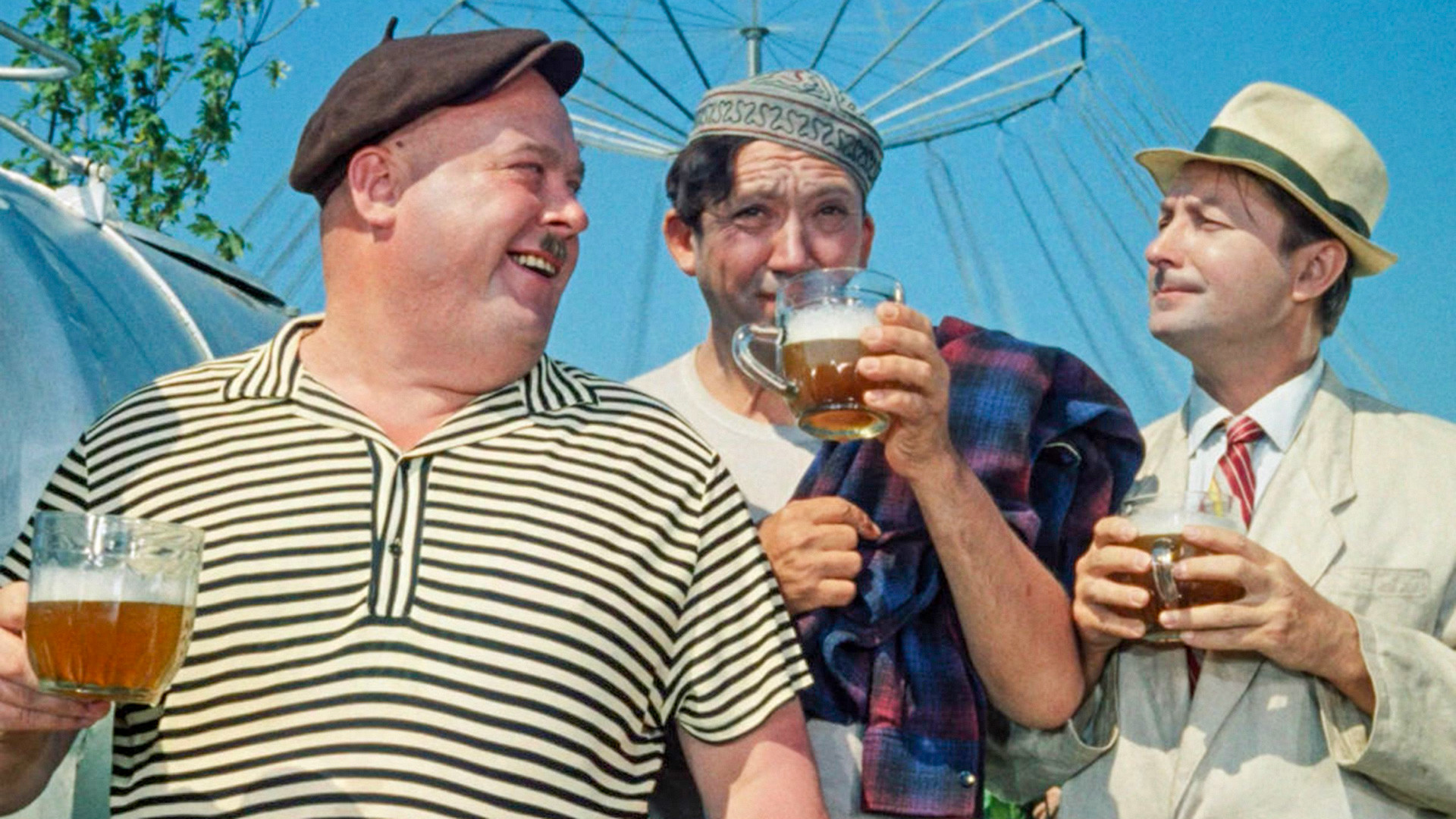 Leonid Gaidai/Mosfilm, 1967
A Soviet person desperate for a drink could find a reason to indulge themselves on any day of the week, all year round. At the same time, there were “legitimate” occasions for having a drink that were universally recognized and did not raise objections either from the drinker’s family members at home or colleagues at work. 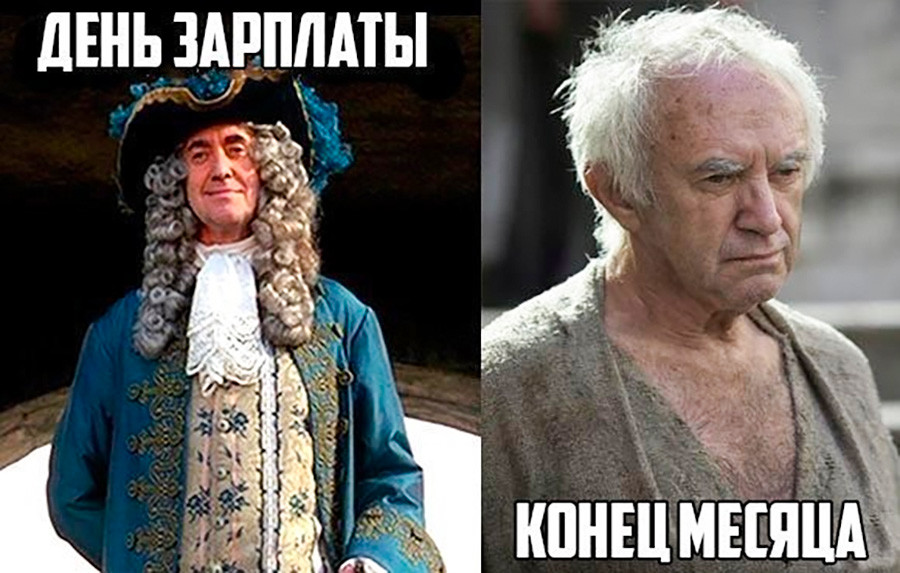 Pay day VS End of the month

A Soviet person seldom had any extra money to spare. This may be the reason why the modern market economy has so many financially illiterate people - they simply did not know what to do with money, which they never had. That is why when people in the USSR received a salary or a bonus, they would often spend practically all of it on drinking and partying on the same day... After all, we only live once (The remaining money, if any, was used to repay debts). 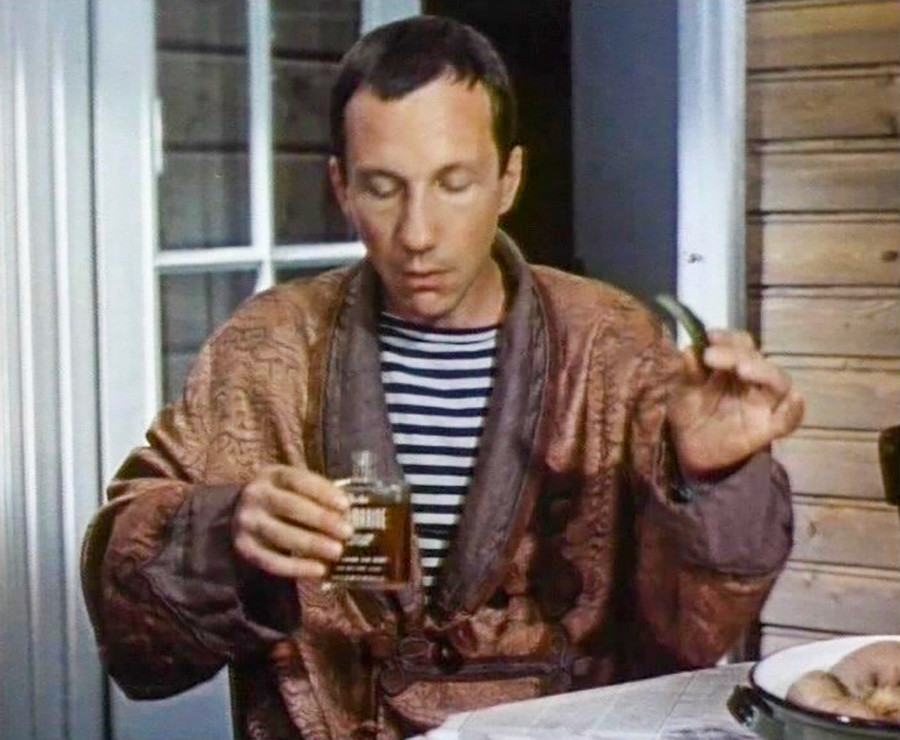 A still from 'Gentlemen of Fortune' movie

There could hardly be a more legitimate reason for having a drink than an approaching weekend. Friday evenings were the merriest time of all, with huge lines forming outside beer stalls. Having completed a week’s work, one could drink with a clear conscience and without worrying about a hangover, since the following was a day off! 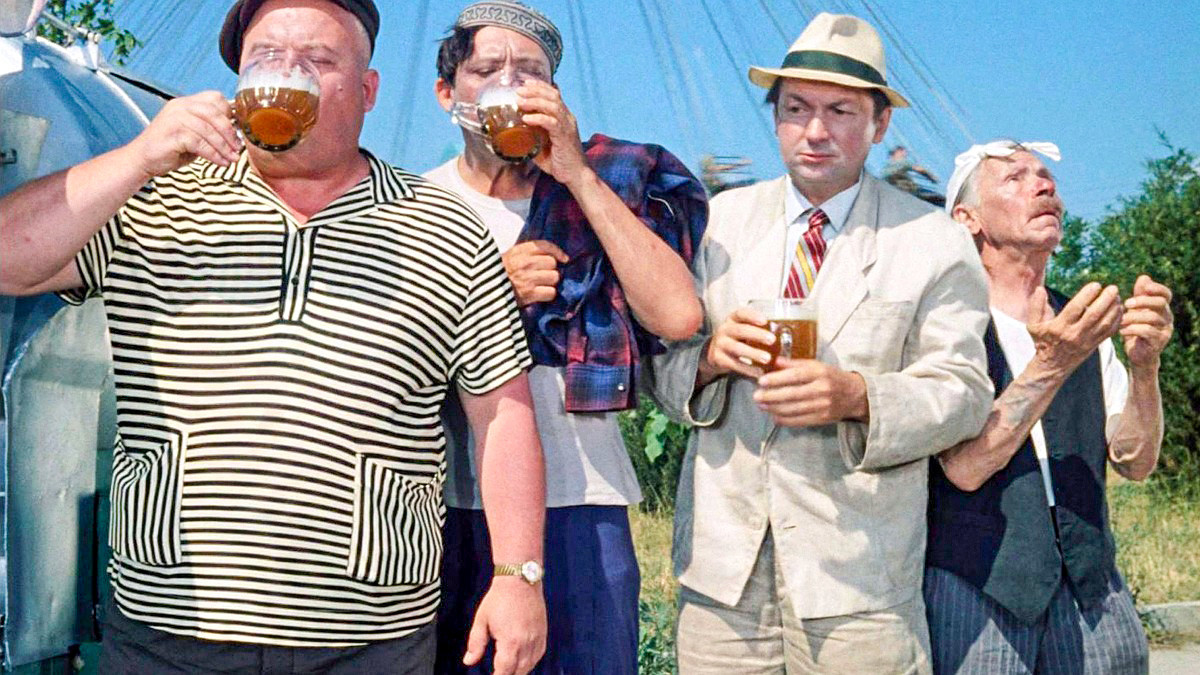 You didn’t expect that, did you? Wednesday is still referred to as a “little Friday”, when one could “rehearse” Friday-night partying and slightly cheer oneself up when faced with the prospect of having two more days of work before a weekend! That said, one could find a reason to drink not only on any day of the week, but also on any day of the year. There were even humorous calendars published called 365 Reasons to Drink, which listed “special occasions" for each day of the year – from accountants’ professional holiday to Bastille Day.

4. End of the working day 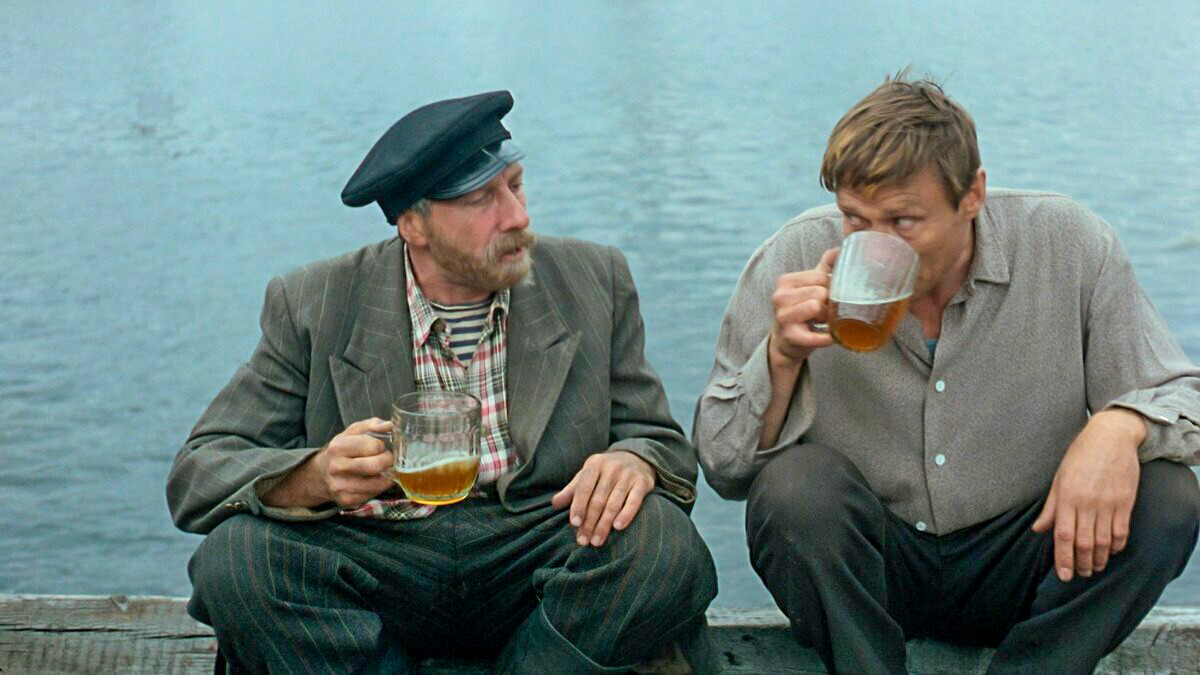 A still from 'Love and Pigeons' movie

“I had a difficult day,” was a line that any Soviet wife knew all too well! Translated into plain Russian, the phrase essentially meant: “Leave me alone.” People in the USSR did not have many forms of entertainment to choose from after work - or they could not afford them. That is why, for many people, the only one way to relax, say, after a hard day of work at a factory was to have a drink. And there was a lot of sympathy for that. 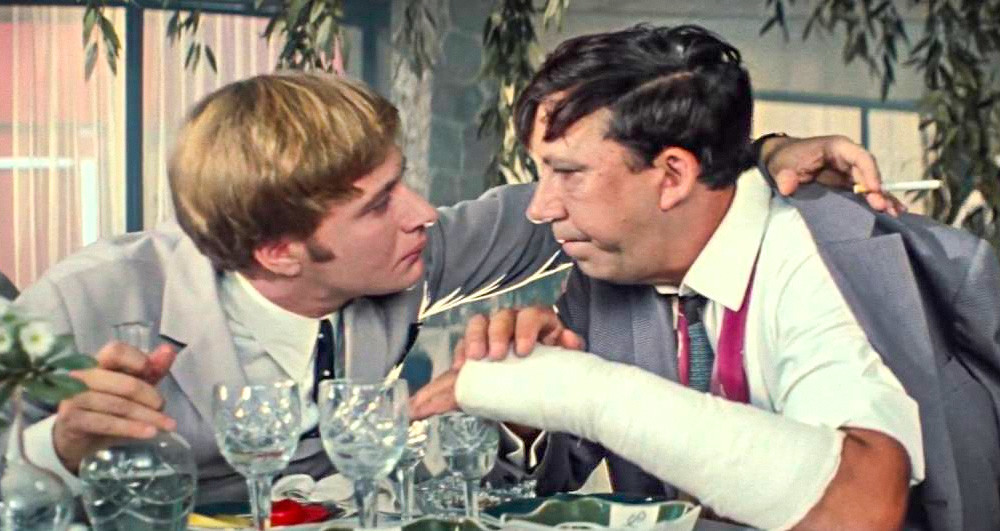 Drinking alone was considered unbecoming and even heavy drinkers would often say: “I am not an alcoholic to be drinking alone!” But if you meet a friend, especially by chance, especially someone you have not seen for a while, that is a completely different story… and a perfect excuse to share a drink. Furthermore, those who refused to drink with a friend – even if they had a good reason for that – could even be subjected to some shaming. “Don’t you respect me?” was the phrase used by all Soviet drunks, as immortalized in Leonid Gaidai’s cult comedy The Diamond Arm.

6. Finding a spare ruble in your pocket 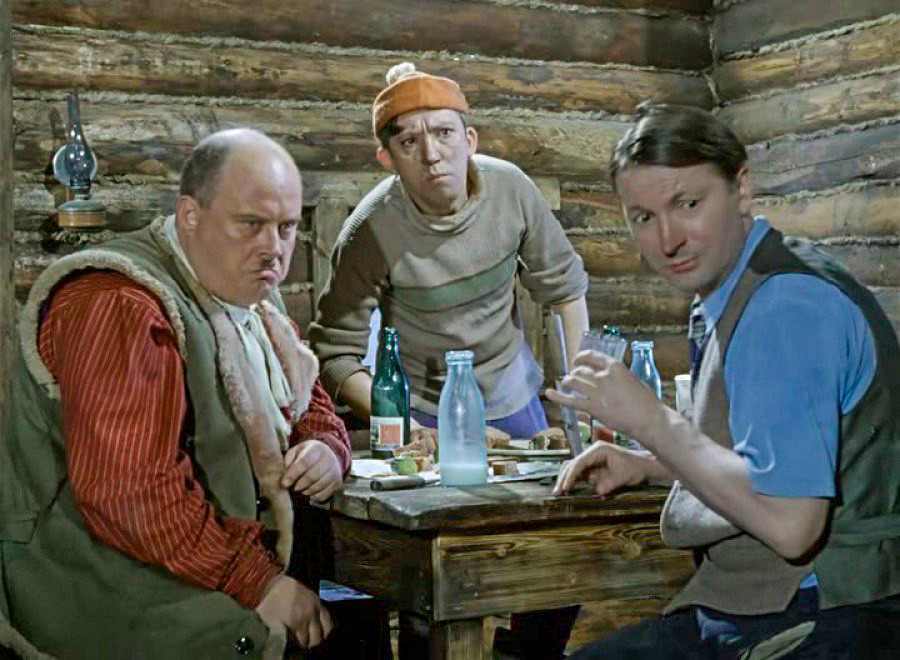 A still from 'Bootleggers' movie

“Sharing three-way” (сообразить на троих) is a phrase that carries a raft of cultural and historical codes. Firstly, it yet again confirms that drinking alone is not a good idea. Secondly, it refers back to Nikita Khrushchev’s anti-alcohol campaign in the 1960s. Previously, one could order 100 ml of vodka at a café and have it with a sandwich, which was quite civilized and reasonably-priced. However, after the reform, cafes and other catering establishments were banned from serving strong alcohol. Thus, the only way to have some vodka was to buy a whole bottle of it, which, of course, was impossible to drink alone. Hence the perpetual search for two more “drinking companions”, sometimes even from among strangers. A bottle of vodka cost 2 rubles and 87 kopecks, so each contributed a ruble and the change was used to buy a simple snack (for example, processed cheese). Once a bottle was purchased, the trio would drink it on a bench in a public garden or right outside the store (Many Russians have stuck to this “habit” to this day, despite all the official bans on drinking in public places).

7. A journey on a commuter train 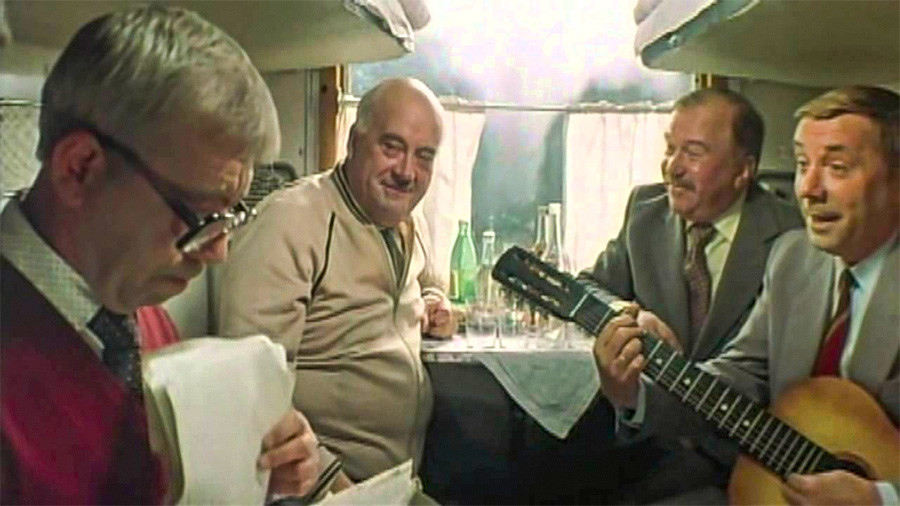 “And I had a drink right away!” This phrase from an expert in drinking on commuter trains, Soviet writer Venedikt Yerofeyev, has become a meme in its own right. His postmodernist book Moscow-Petushki (a.k.a. Moscow To the End of the Line) is a real odyssey of a hero who is travelling to see the woman he loves, drinking with various random companions on the way. A commuter train was an ideal place to have a drink – you took it after work, it was warm and there was never a shortage of potential drinking companions. As a rule, a bottle of vodka could be easily finished even before the train set off.

8. A colleague’s or a family member’s birthday 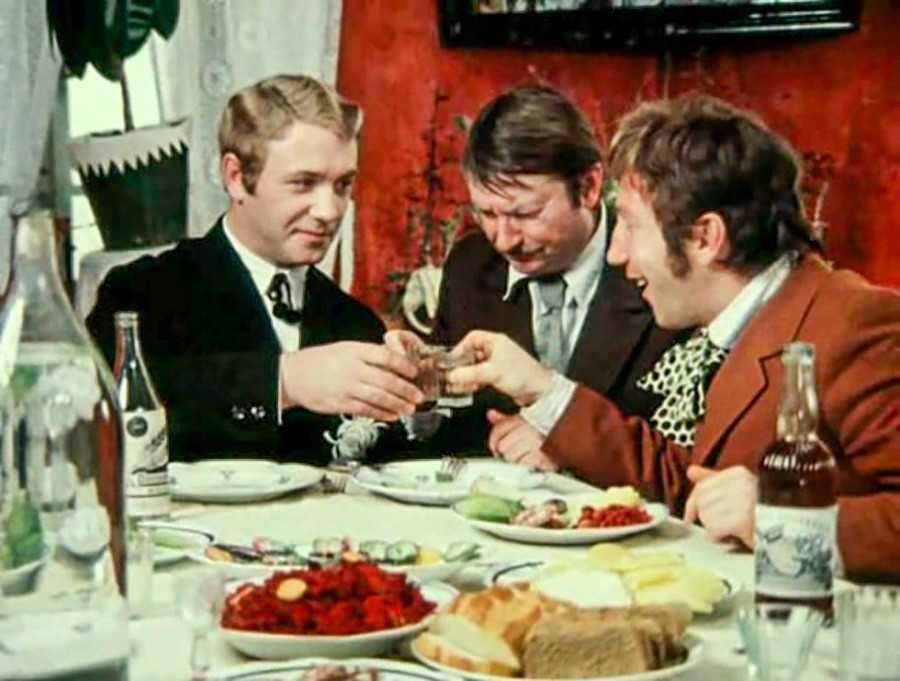 At work, a colleague’s birthday celebrations could start right in the morning. The management often turned a blind eye to this practice - after all, there was no other form of team building in the USSR. Often, fellow workers would collect money for a birthday present for a colleague and the latter would then spend it all on drinks and some snacks for their colleagues. In addition, it was customary for a colleague who had something to celebrate, like one’s birthday or the birth of a child, to bring some food and drinks to treat their fellow workers by way of celebration. When it came to family birthdays, drinking to the health of the birthday person was the most natural thing in the world. In Soviet times, birthdays were usually celebrated at home, rather than in cafes or restaurants. So, if somebody had a bit too much to drink, they could always lie down for a while. By and large, wakes were very similar to birthdays. Everybody gathered at the table, drank and ate – but they did not clink glasses. By the end of the evening, guests at a wake could even become merry, remembering funny stories about the deceased.

9. “Washing in” a new purchase with a drink 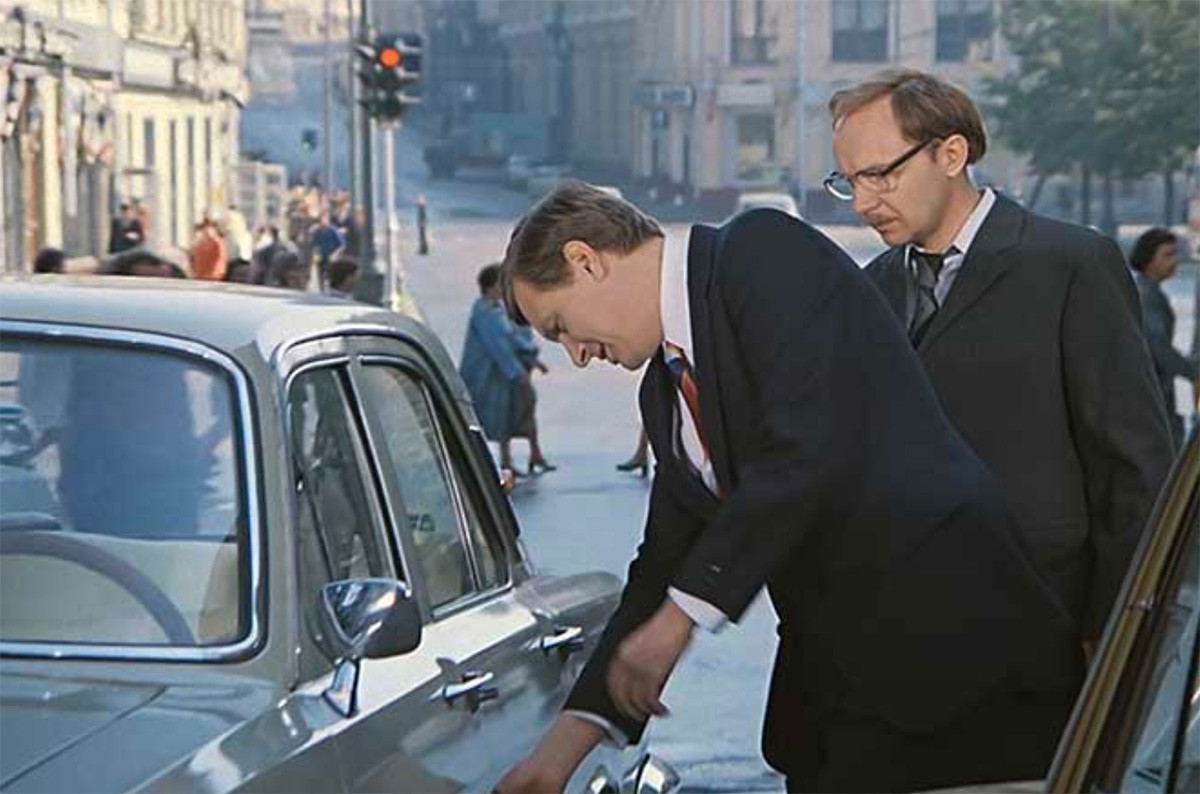 A still from 'Office Romance' movie

Another occasion when one was supposed to treat their colleagues to drinks was after the purchase of something new, especially something expensive: an apartment or a car. The idea was to show off a bit, but also to share your good fortune with others (as if making up for the fact that you had extra money for such a purchase so that others would not be offended). In addition, this обмыть (“washing in”) a new purchase with a drink was considered a good omen, symbolizing that the new acquisition will serve its owner for a long time and will make them happy.

10. New Year and other holidays 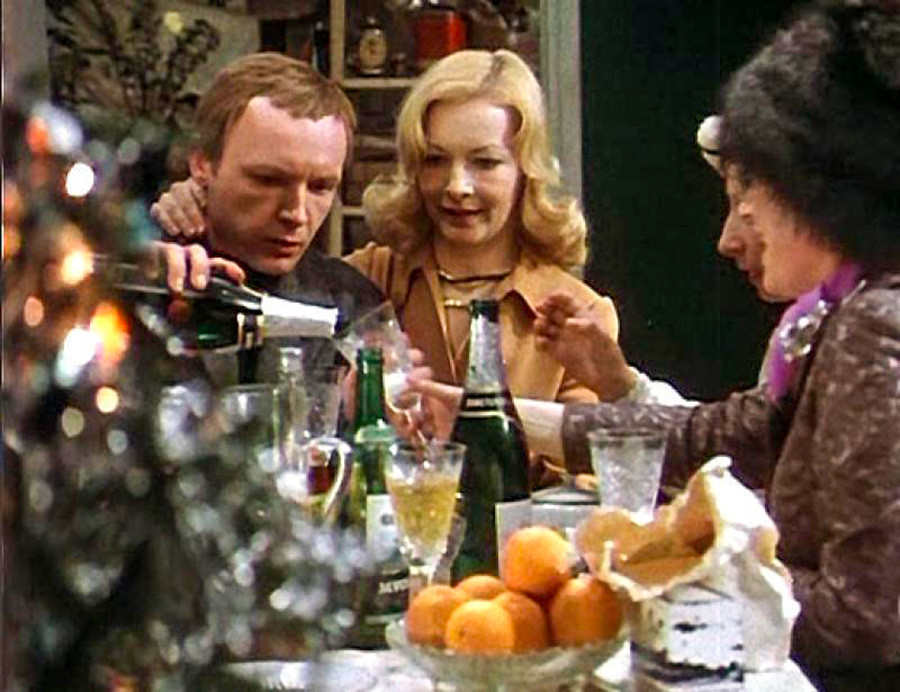 A still from 'The Irony of Fate' movie

It is hard to think of a better excuse to have a drink than an official public holiday. On Defender of the Fatherland Day (February 23), one should drink to the health of the men who serve their country, while on International Women’s Day (March 8), everybody drinks to lovely ladies. However, the most popular holiday and occasion for a drink in the USSR was always the New Year. The plot of a classic Soviet movie, The Irony of Fate, which still remains one of the most popular films among Russians, centers around the consequences of drinking a bit too much during the festive season.