Would you survive a week in the Russian army? 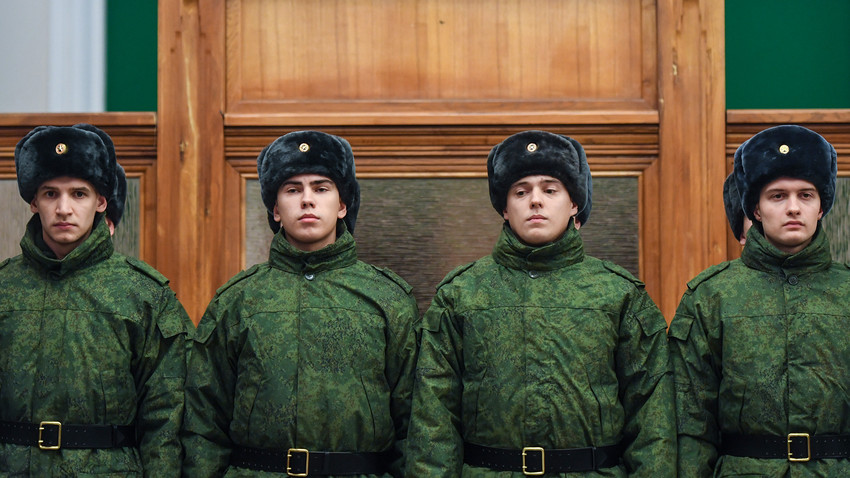 Kirill Kukhmar/TASS
If you had to do military service in Russia, you could look forward to “rubber” Wednesdays, “gay” Thursdays and lots of other surprises throughout the year.

In addition to contract service, Russia still has compulsory conscription. All young men on turning 18 or graduating from university must serve – these days only for a year (reduced from two). Many still fear the army because of the harsh living conditions and hazing. Some compare conscription to a year’s prison sentence.

Much, of course, depends on which military unit you go to. In any case, conscripts are advised to treat the ordeal with humor, view it as an experience, and even try to enjoy military life.

Here’s what would await you and how to get through it. 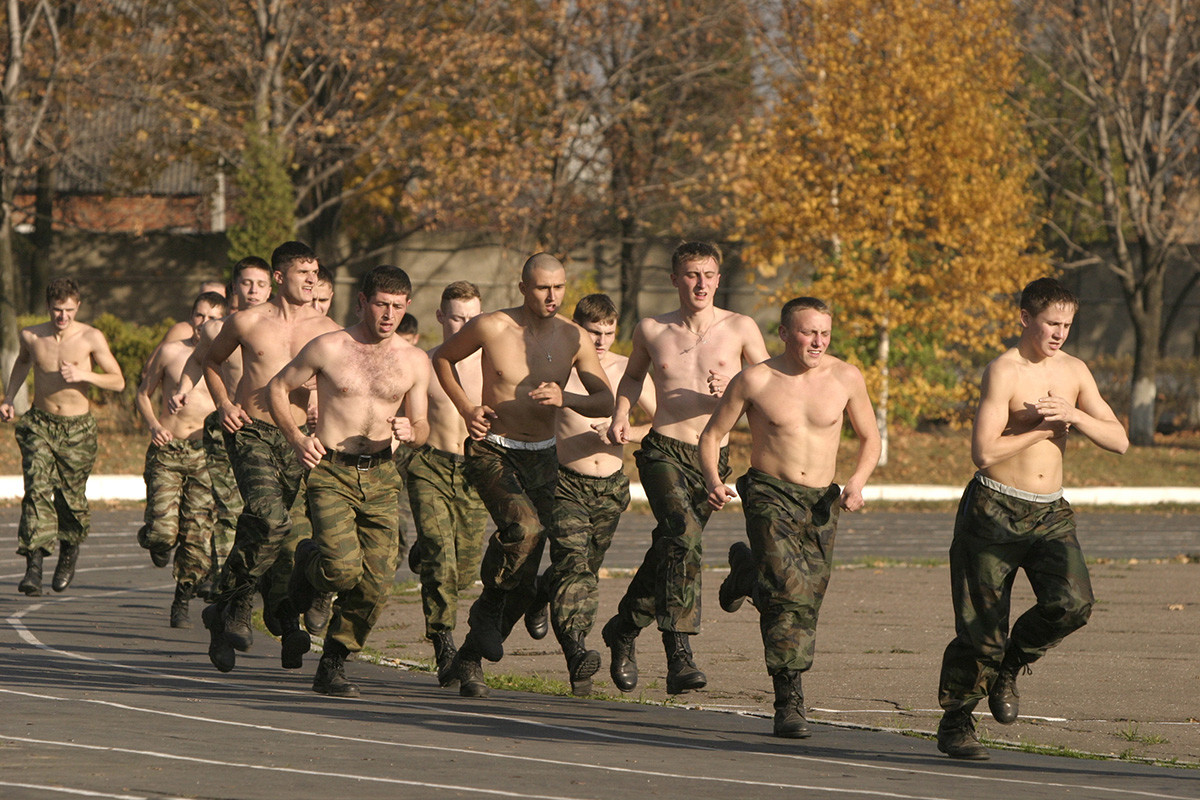 The start of the working week in the army is always a whirlwind of events. The morning begins with reveille at 6 a.m., accompanied by the commander’s cries of “Rise!” and an obligatory cross-country march. You and your fellow conscripts will come spilling out of the barracks and, in snow or shine, go on a several-mile run around the unit and surrounding area, singing a call-and-response song.

Monday is the day when the commanders really drive you, to shake off the weekend. Even the slightest step out of formation is punishable by a dirty-work shift.

It is best to spend this day on combat duty or at the shooting range, away from the eyes of the unit officers. This is because, according to an obscure military tradition, it is on this day that up-and-coming Napoleons try to show their superiors how effective they are at whipping their underlings into shape.

If you stayed at the unit and didn’t get sent to the shooting range or put on combat duty, you will spend the day marching on the parade ground to the bellowing of the commander, or scrubbing the latrines. 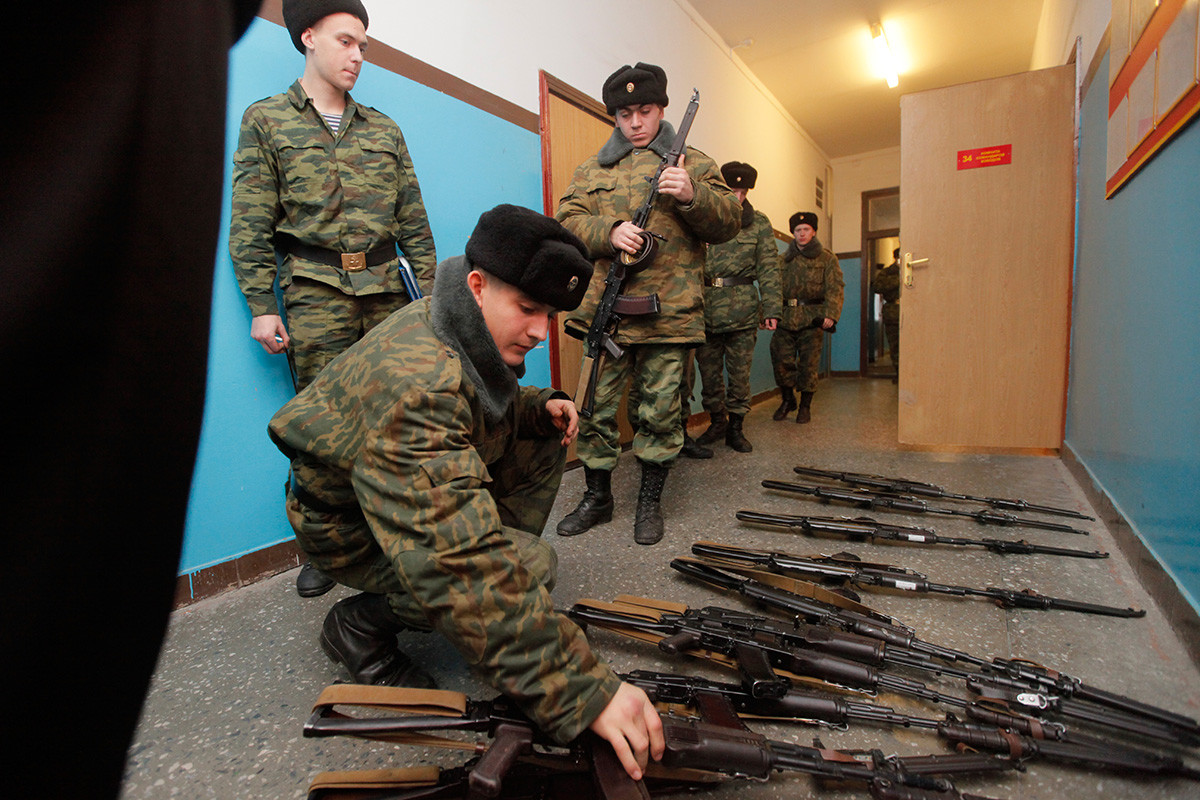 On Tuesday, all personnel are sent to the shooting range. In the first few months of service, this is always a favorite activity. But it gets tedious after a while.

Ninety percent of the time you will be taught to fire an AK-12 and a Yarygin pistol. Shooting takes place in parallel with weapons-handling training and other combat techniques.

For more about soldier training, including special forces, see our article here. 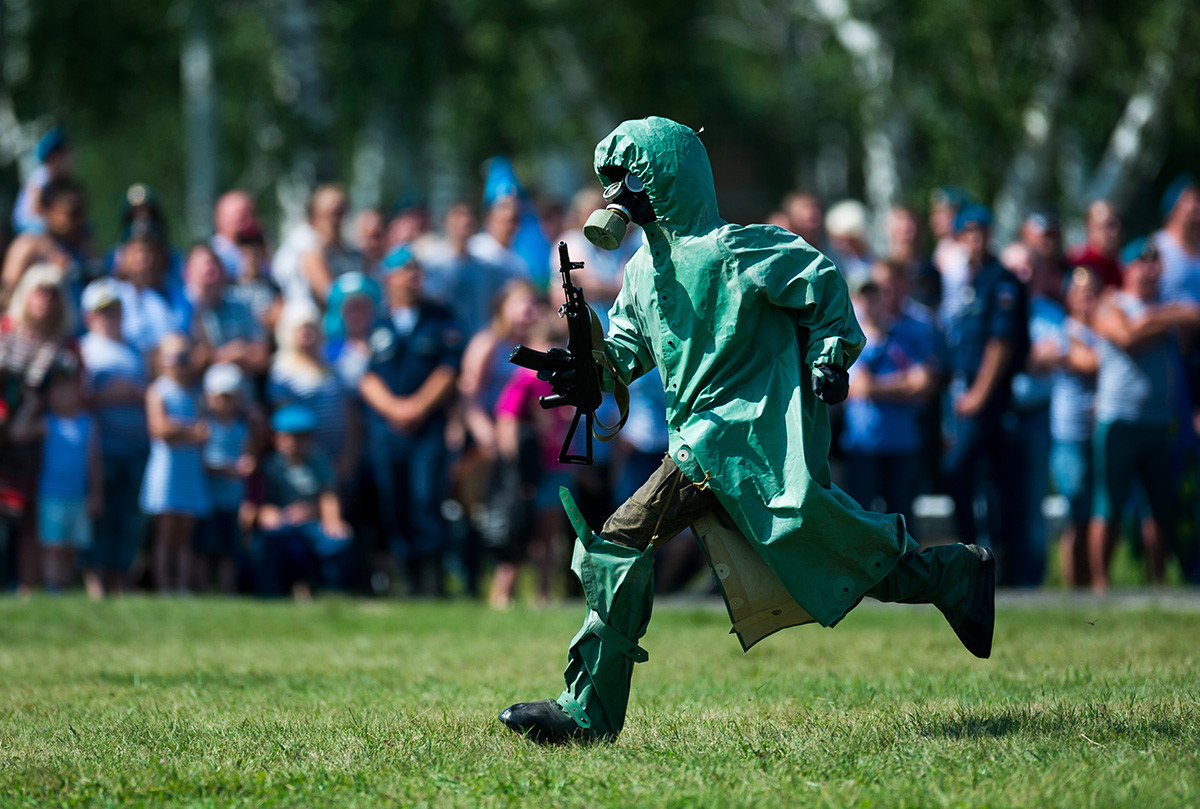 Wednesday’s motto is: “What if there’s a war?” On this day, you will practice tactical and technical combat actions at the unit and in the forest wearing... hazmat suits.

The suit consists a whole-body rubber garment with gas mask, as worn, for example, by rescue workers at Chernobyl in the HBO series of the same name. This impermeable, very stuffy outfit should (theoretically) save you from radiation after a nuclear strike or biological weapon attack.

In the morning you will be taught how to put the suit on, and in the afternoon, still wearing it, you will be sent on another run, plus terrain skills practice. 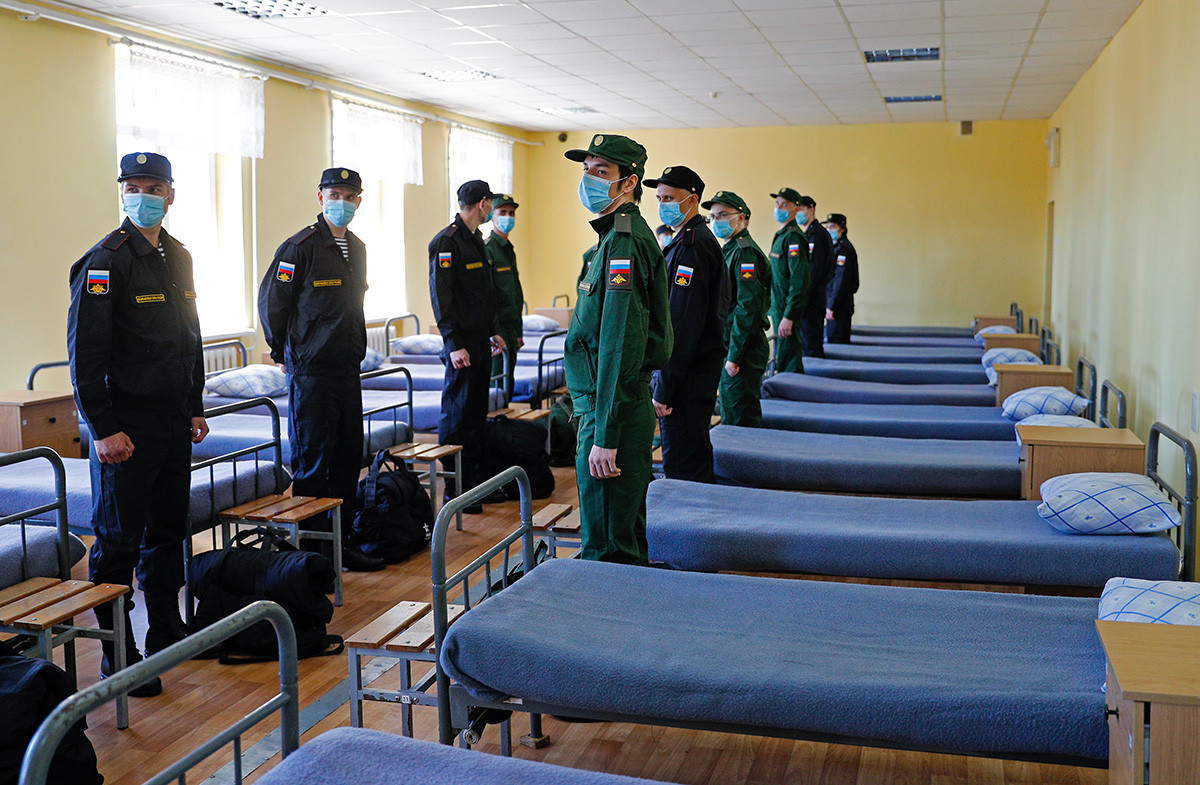 Thursday is medical day, when doctors examine the entire personnel of the unit.

Soldiers call it “gay” because everyone strips to their undies or birthday suit, while doctors carry out a close inspection. The examination is mandatory, and medics are instructed to report any signs of beatings or injuries not reported by the conscript himself. The army is always keen to deal with any hazing incidents internally.

After the morning checkup, you are sent to the bathhouse, where even soap-dodgers can’t avoid a mandatory wash. 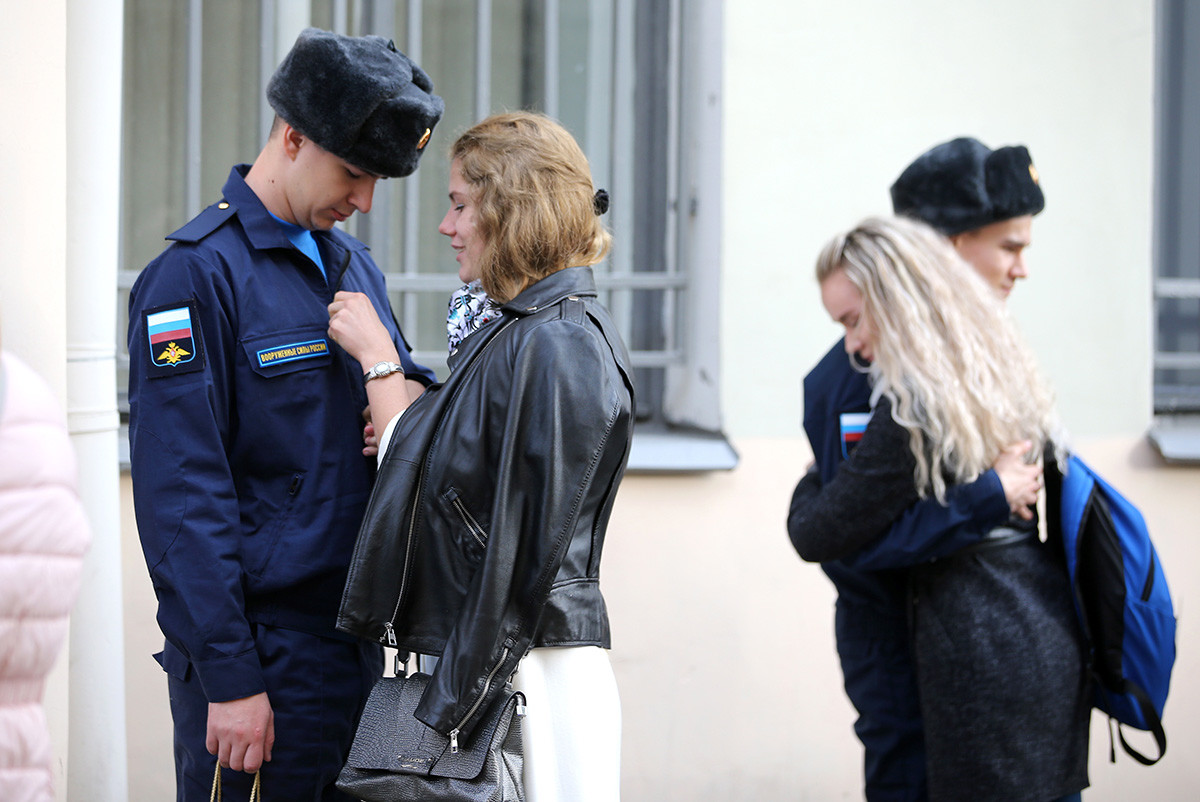 Friday is when the weekend leave orders arrive. This is the most anticipated day of the week, when, if lucky, you are released into the civilian world for a couple of days and allowed to spend time with family and friends.

Every soldier looks forward to Friday in hope. Your weekly report arrives at lunchtime, detailing all your achievements (and screwups) on duty. The best are allowed home for the weekend. The rest remain at the unit to defend the Motherland over the weekend and do the “housekeeping”. 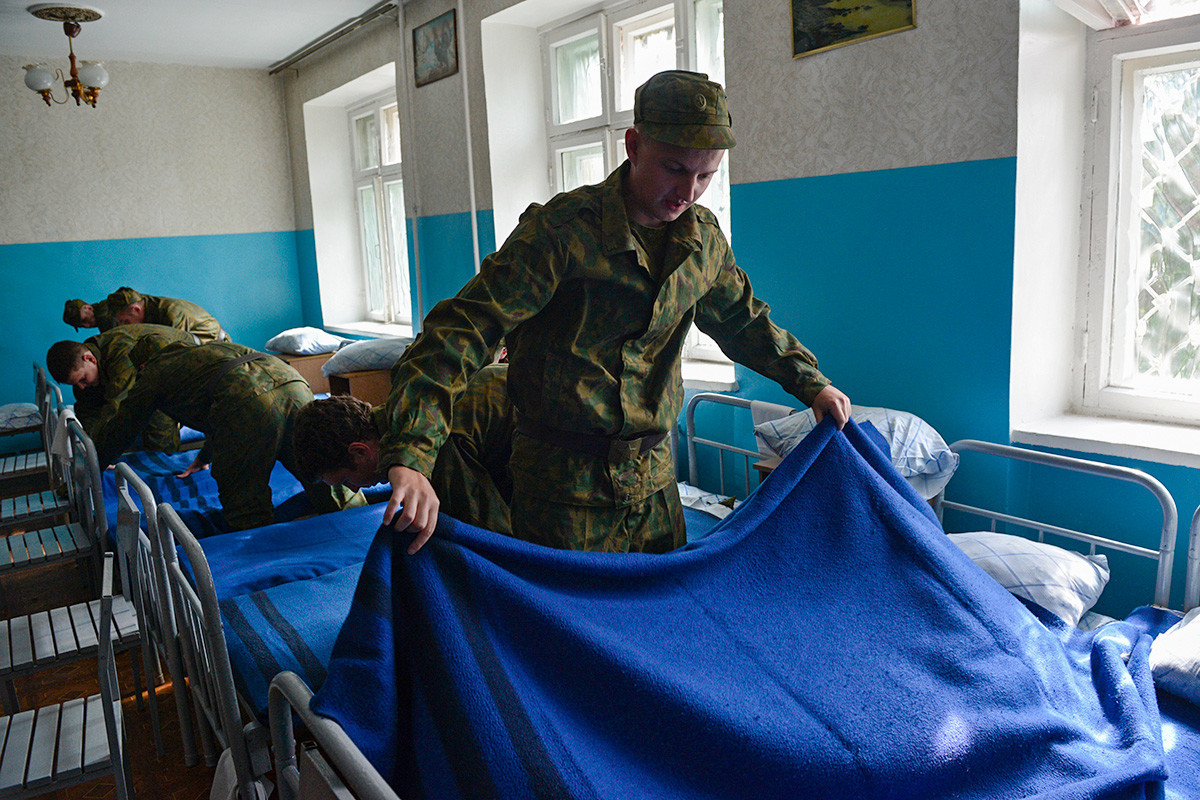 Saturday is “maintenance and cleaning day,” when everyone who didn’t get to go home to his family and girlfriend is sent to clean the unit barracks and grounds.

The first half of the day adheres to the “too much foam is never enough” principle. You literally float in the stuff as water gets poured all over the barracks, which are then scrubbed to a shine.

For those who say you should discard dropped food, the Russian army is the only place in the world where a sausage on the floor is cleaner than one in your hands.

On Saturday, you will learn what real cleanliness is, and begin to respect your parents more (assuming they do the cleaning back home). 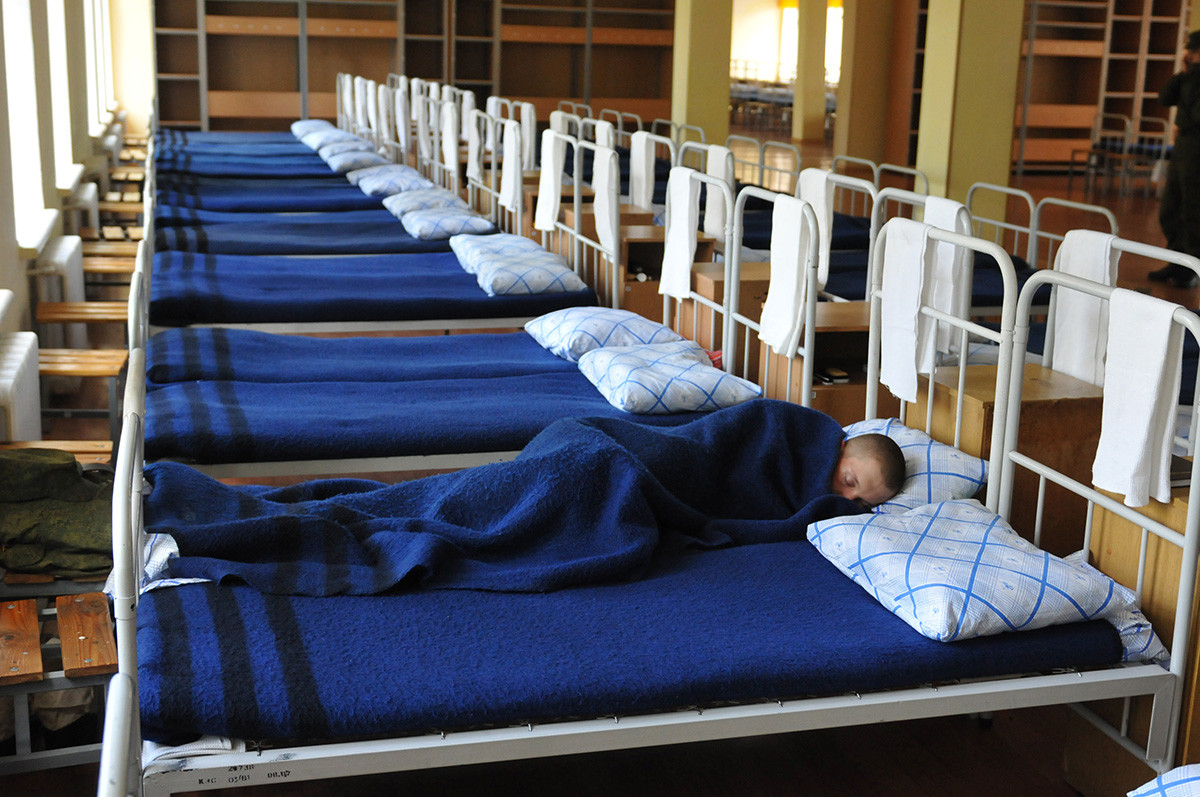 Sunday is when you can sleep for longer. “Longer” means 30 minutes more in bed. It is also the only day you’re not forced to do an early-morning cross-country run.

You can spend Sunday doing your own stuff: go for a stroll, work out in the gym, meet with visiting relatives, read a book or even get some more shut-eye.

The last option is a special luxury in the army, because although officially soldiers should get 6-8 hours’ sleep a night, in reality it is always much less. So everyone tries to snatch forty winks whenever the opportunity presents itself.