What do Russians celebrate on November 4? 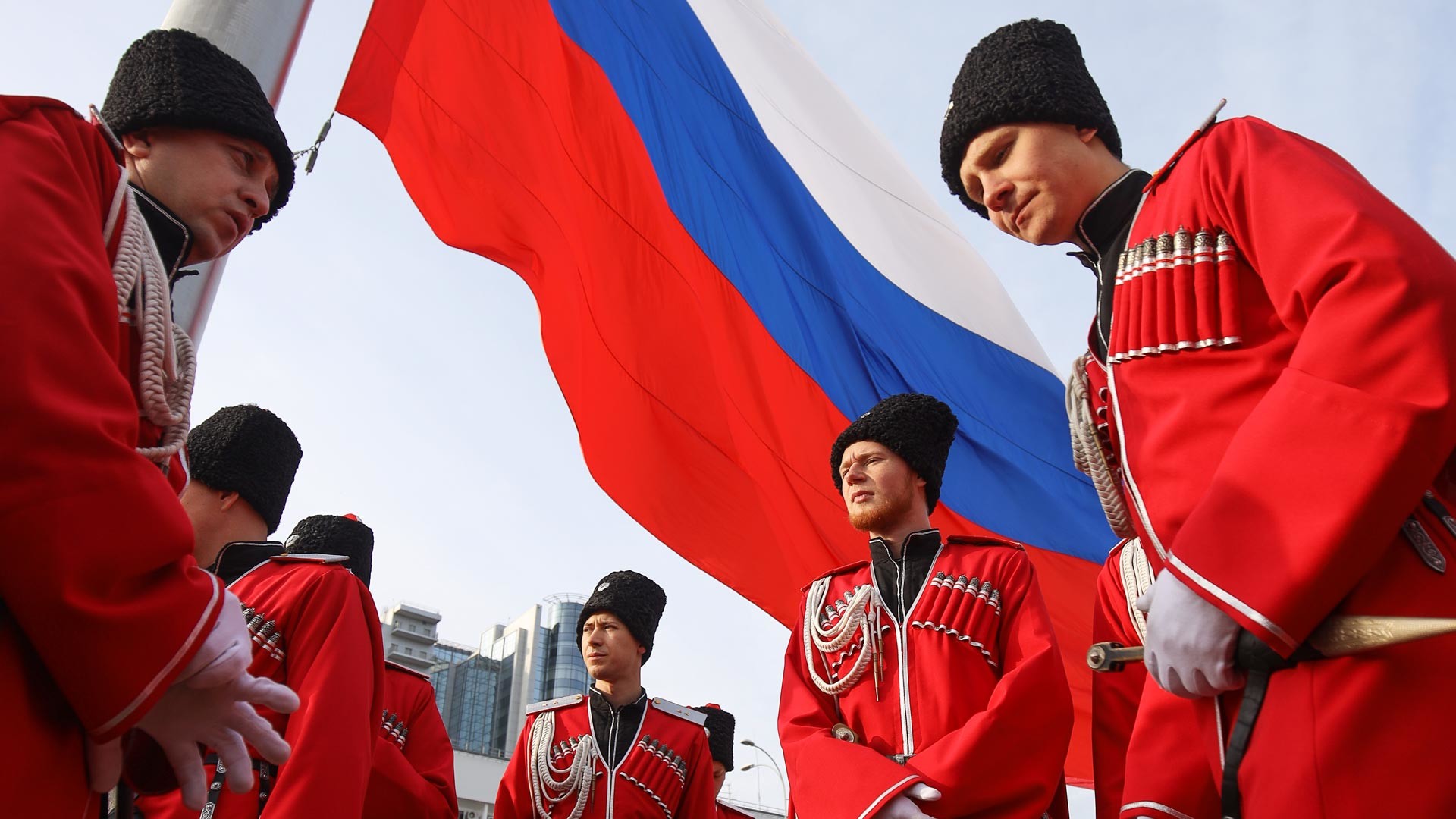 Vitaly Timkiv/Sputnik
This quite recent official holiday is a little over 15 years old, but early November was chosen for a reason.

Among the nation’s favorite official holidays is one of its newest – National Unity Day. It falls on Nov. 4 and often the authorities add another day to it, sometimes even shifting the weekend.

It gives Russians something to look forward as the cold and dark set in. Some take the opportunity travel to warmer climes; others sit at home wrapped in a blanket. But what does this date commemorate?

National Unity Day was officially introduced in 2005. Unfortunately, even now, far from all Russians understand what they're celebrating. But the date is rooted deep in history, more specifically, the early 17th century, when the Russian people united to save their land from foreign occupation. But first things first.

The year 1584 saw the death of Tsar Ivan the Terrible, leaving the sickly Fyodor Ioannovich as his only heir (having accidentally killed his first-born son). Because Fyodor had no offspring of his own, after his death in 1598, the Rurik dynasty, which had ruled Russia since the 9th century, came to an end.

The Russian nobles (known as boyars) elected a new tsar. That was Boris Godunov, the brother of the wife of the late Fyodor Ioannovich, who had wielded great influence over the ineffectual tsar. However, just a few years into his reign, an imposter, claiming to be Dmitry, the youngest son of Ivan the Terrible and thus the true heir to the throne, invaded Russia with a Polish army. In fact, Dmitry had died as a child in murky circumstances in 1591. 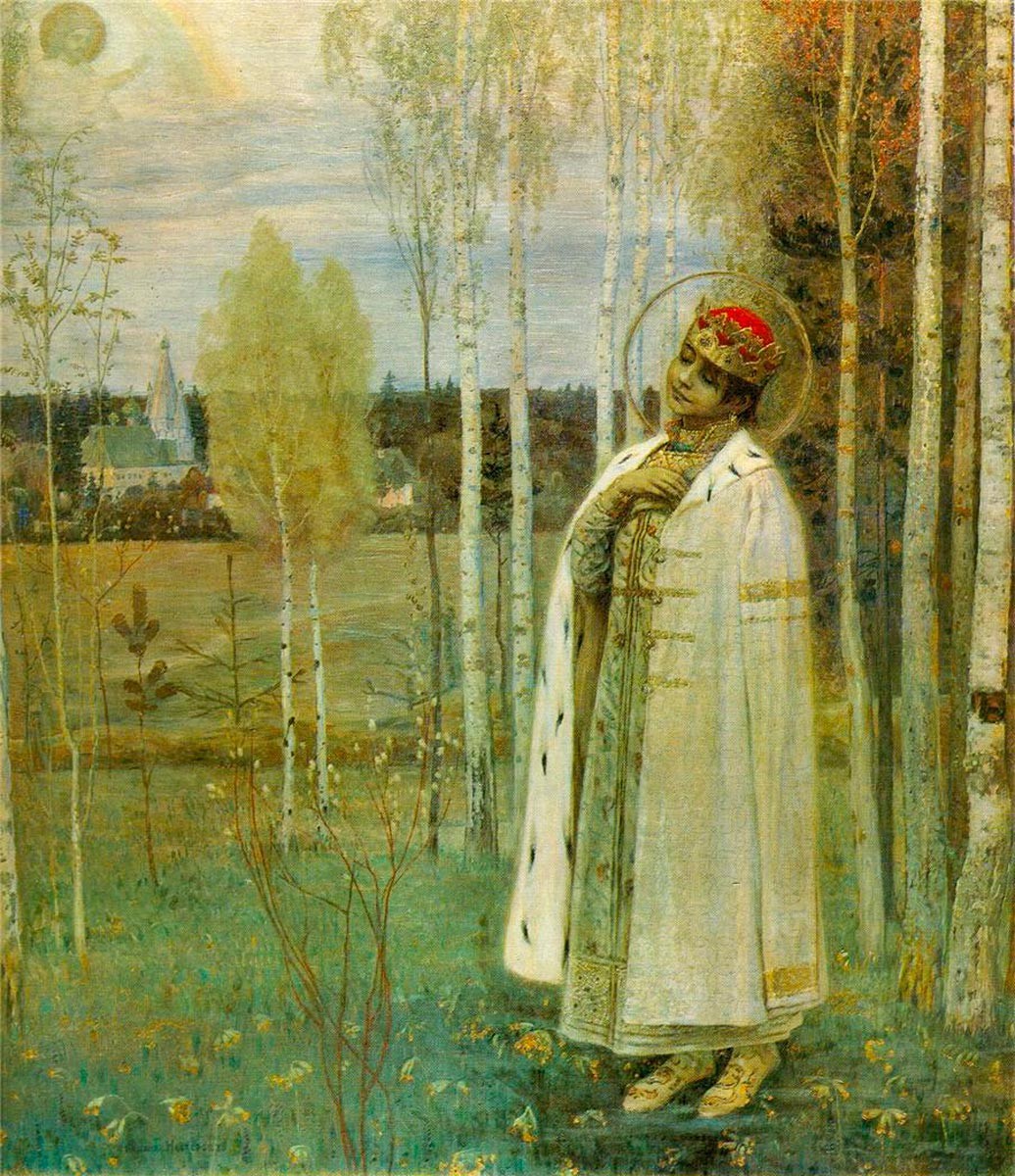 The rumor spread that he had been murdered on the orders of Gudonov, so as to be rid of a potential rival. This was picked up and exploited by the pretender to the throne (and another two after False Dmitrys after him). The myth later entered popular culture thanks to Alexander Pushkin’s Shakespeare-inspired historical play Boris Godunov, which also spawned a famous opera by composer Modest Mussorgsky.

False Dmitry I (the name by which history remembers him) was recognized as the heir to the Russian throne by the Polish–Lithuanian Commonwealth, Russia’s powerful neighbor to the west. He agreed with the Poles that if they supported his claim militarily, he would reward them with Russia’s west-lying lands.

The Time of Troubles

The early 17th century witnessed one of the most turbulent periods in Russian history (which is saying something), known as the Time of Troubles. After Godunov’s death in 1605, the boyars could not decide among them how to carve up power. This vacuum allowed False Dmitry I, together with the Poles, to invade Russia, seize Moscow and occupy the Kremlin. He even got married their, in exuberent style, to a Polish noblewoman, Marina Mniszech, and crowned her as tsarina.

After a while, however, the boyars got their act together, regrouped and put the impostor to an inglorious death. The boyar Vasily Shuisky became tsar. 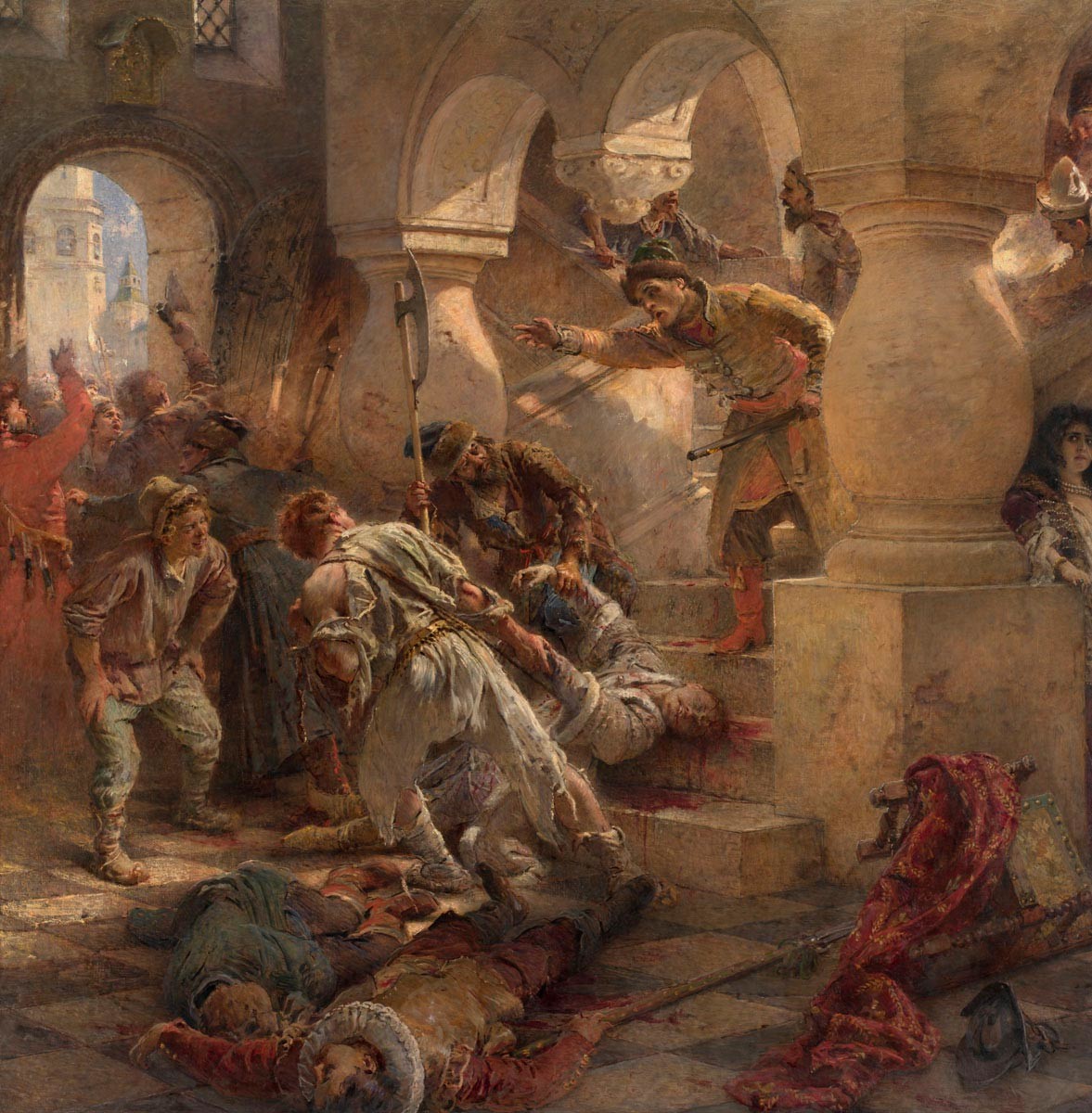 But no sooner had they dispatched the first False Dmitry than another popped up, again claiming to have survived the alleged assassination attempt in 1591. Even Marina Mniszech recognized him, and the Poles gathered another large army in support of him, seizing Russian towns and cities one by one. In 1608, False Dmitry II set up a residence for himself near Moscow, in Tushino (for which reason he acquired the nickname “the Tushino thief”). He had not yet taken the capital, but vast swathes of Russia were effectively under his rule. Even many Russians went over to his side, genuinely believing him to be Ivan the Terrible’s son.

When Vasily Shuisky turned to the Swedes for assistance, the Polish king, Sigismund III, enraged, openly declared war on Shuisky. False Dmitry II played his own behind-the-scenes game, attempting to lure the Tatars and Turks to his side, while some of his supporters swore allegiance to the Polish king. This resulted, in 1610, in the impostor being killed. Meanwhile, the Poles had again occupied Moscow and the Kremlin. Shuisky was exiled to a monastery, and the council of boyars, the Semboyarshchyna (“seven-boyar rule”), formally took charge. The boyars signed a treaty with the Poles, recognizing Vladislav Vaz, the son of the Polish king Sigismund III, as their tsar. 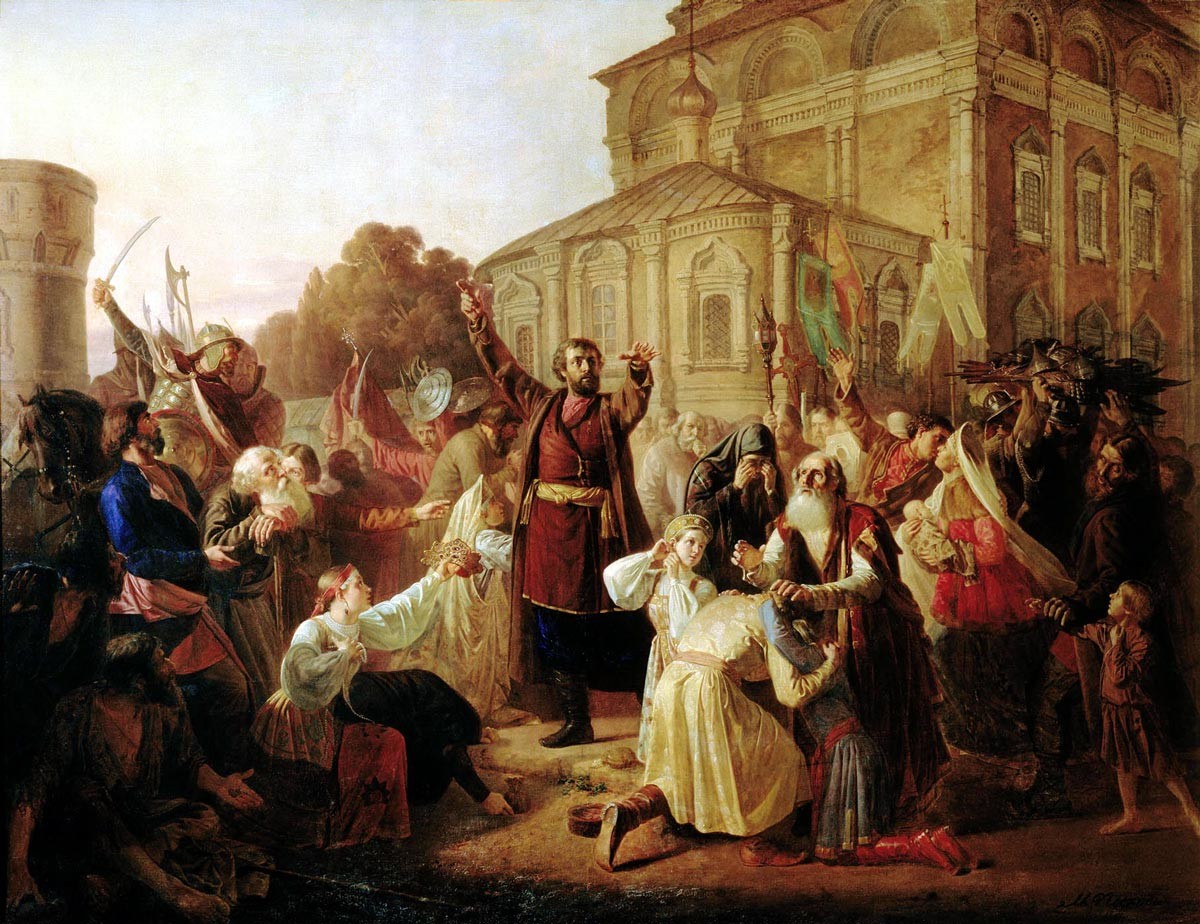 Mikhail Peskov. Minin's appeal to the people of Nizhny Novgorod in 1611, 1861

During the Russian-Polish war, the Russian people for the first time formed a people’s militia to free the country from the foreign invaders. The first campaign to retake Moscow in 1611, however ended in failure and butchery.

The second campaign, in 1612, was led by Prince Dmitry Pozharsky and the merchant Kuzma Minin, whose bronze monument now graces Red Square. Minin, a man of high standing from Nizhny Novgorod, gathered volunteers, while Pozharsky led the military unit. For the first time in Russian history, commoners fought shoulder to shoulder with nobles against an external threat. 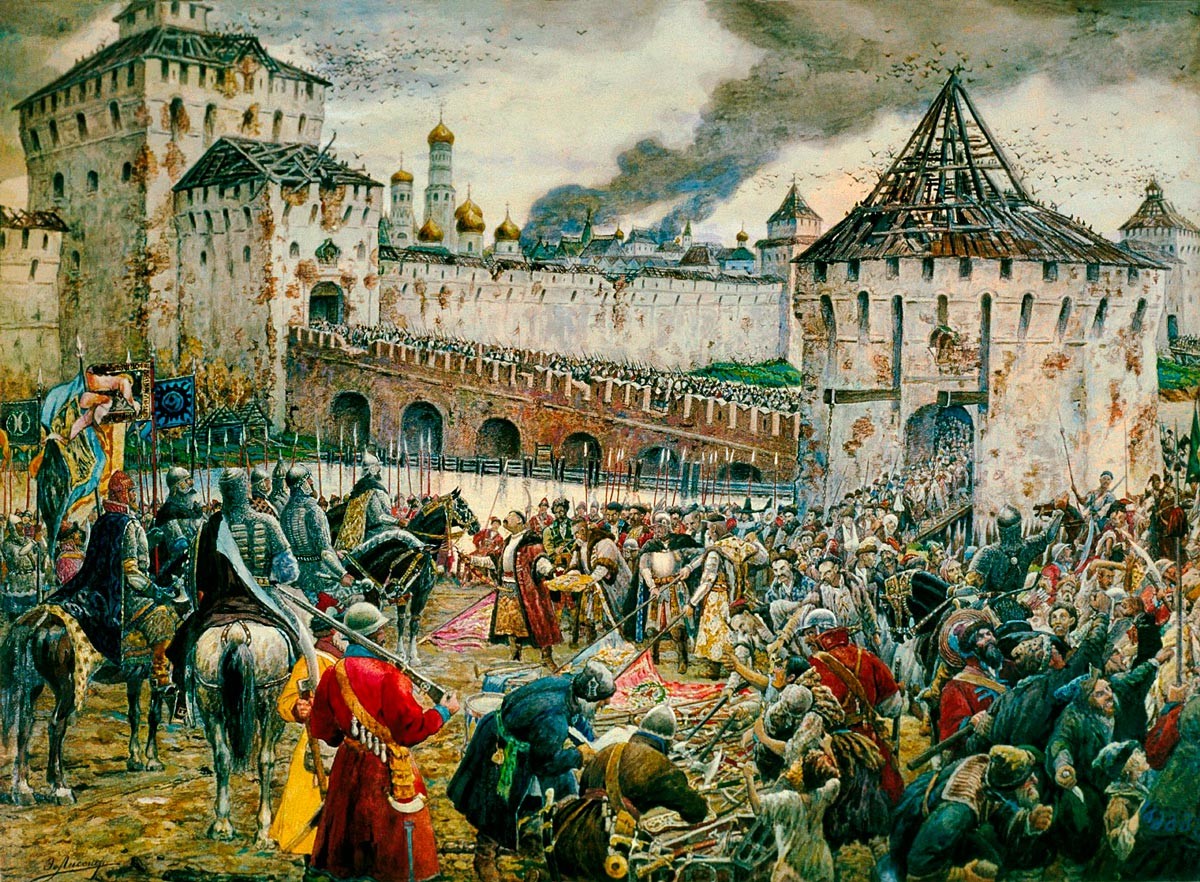 Ernst Lissner. The Poles surrender the Moscow Kremlin to Prince Pozharsky in 1612, 1938

After repelling several attacks by the Polish troops, the militia reached Moscow and laid siege to central Moscow, including Kitay-Gorod and the Kremlin. During the long siege, many in the Polish army starved to death, the remainder surrendered. The Russians cleared the Kremlin of the occupiers, sparing a significant number of them. Read more about the militia’s feat here.

The need for a new holiday

In 1613, after the Time of Troubles, the Romanov dynasty began its 300-year reign. In 1649, the second Romanov tsar, Alexei Mikhailovich, established Oct. 22 as the Day of Commemoration of the Deliverance of Moscow and Russia from the Poles in 1612. According to the Gregorian calendar, which Russia later adopted, this date falls on Nov. 4, now National Unity Day. 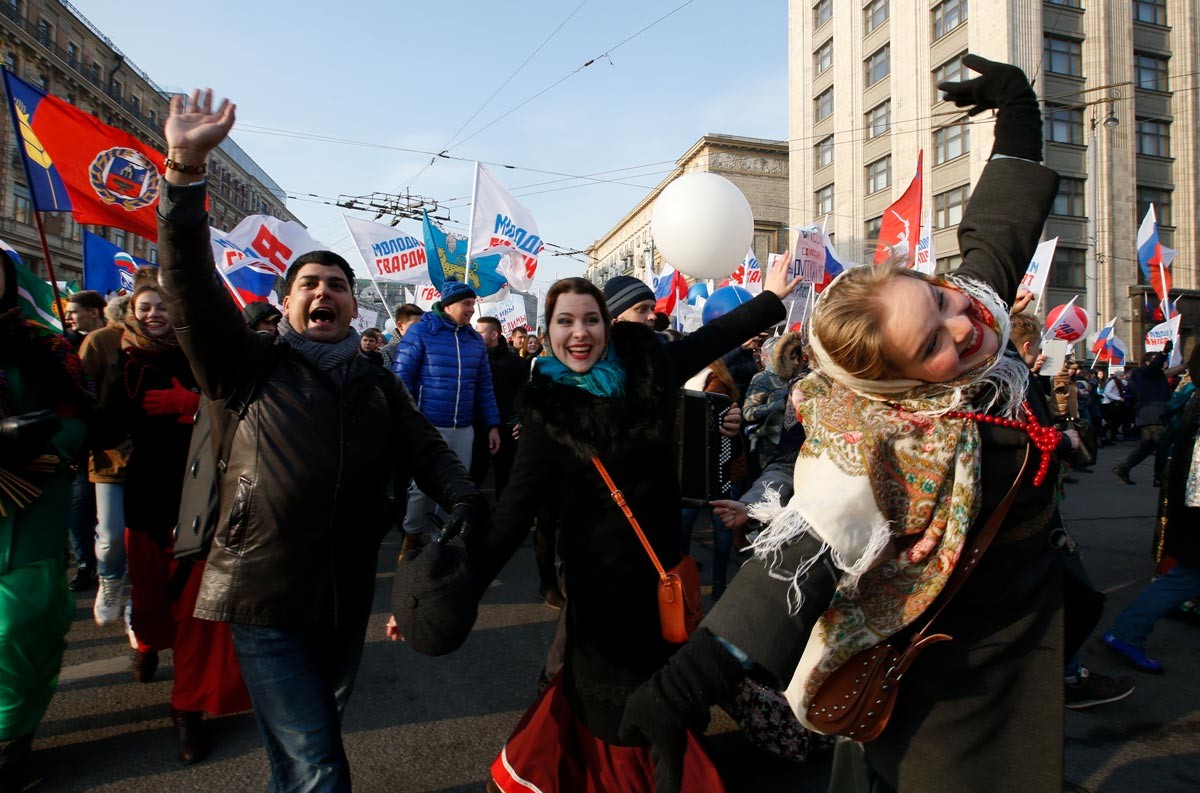 But there is another reason for celebrating National Unity Day in November. On Nov. 7, from 1918 to 1991, the Soviet Union marked the anniversary of the October Revolution of 1917 (according to the old-style Julian calendar, the date was Oct. 25). After the fall of the USSR, this holiday became obsolete. But the nation was used to having an extended break in November, and so an alternative was found to keep the masses happy.

“[The new holiday] appeared for a number of understandable reasons. First, in a country where more than 160 languages are spoken, where dozens of ethnic groups profess all religions of the world, the idea of unity is a prerequisite for peaceful coexistence and state development,” writes former Russian culture minister Mikhail Shvydkoy. “Second, the creation of a new Russian, not Soviet, nation demanded new symbols. An event close to Nov. 7 had to be found to compete with the Soviet tradition.”

“Before this, Russia had no holidays associated with the pre-revolutionary period. It essentially became the day of Russian nationalism,” says one of the ideologists behind the holiday, former Deputy Prime Minister Vladislav Surkov.