Check out this couple’s UNDERWATER wedding in Lake Baikal! (PHOTOS+VIDEO) 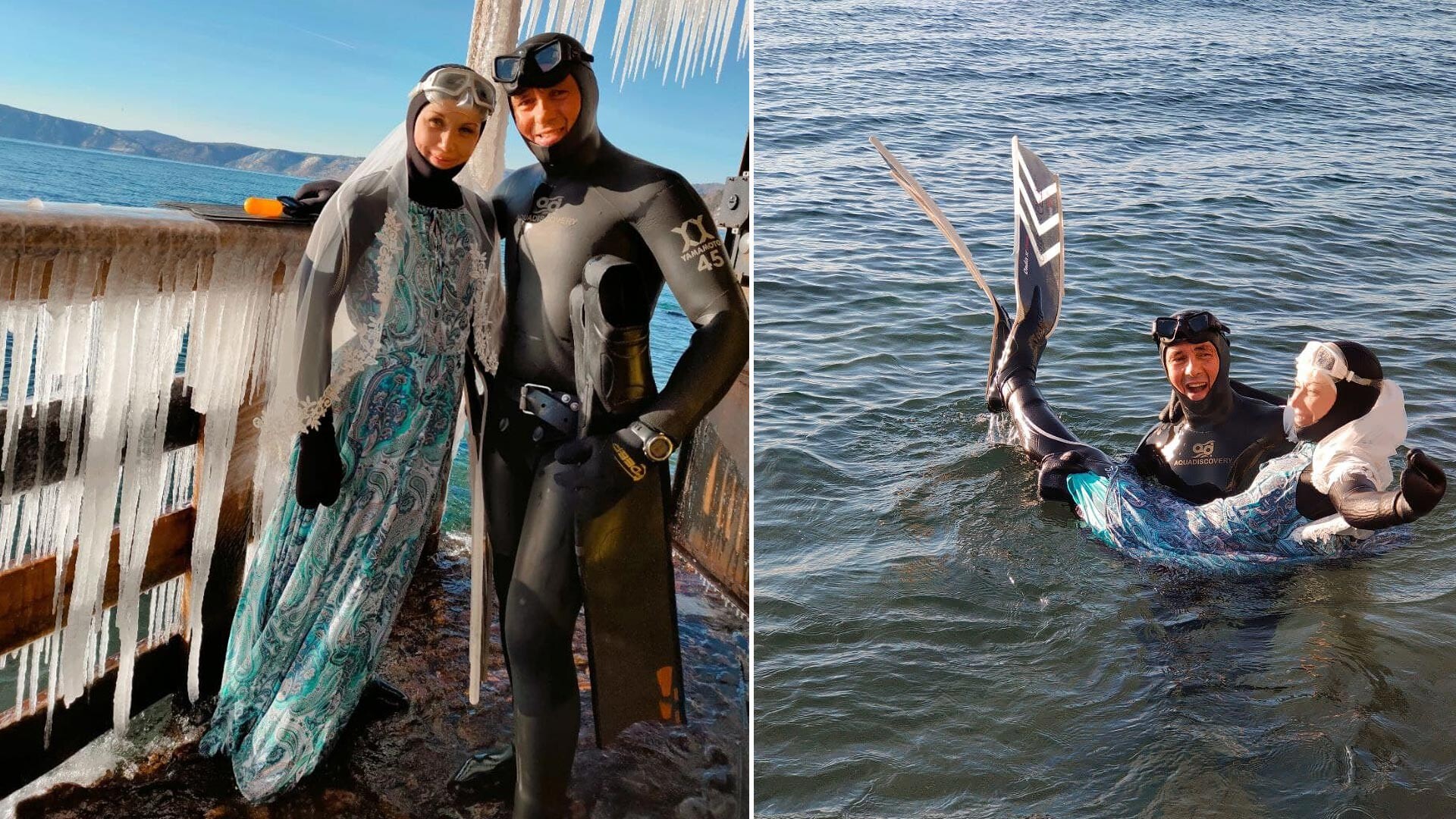 Personal archive
A wedding dress over a wetsuit, complete with a ‘khorovod’ round dance - all of it in the water and in freezing November temperatures!

It’s -7°C outside, the water in Lake Baikal is somehow warmer at 4°C. A bride in a blue sundress over a wetsuit, complete with a veil, submerges herself together with her groom. They swim in sync, like a couple of mermaids, before slowly resurfacing and doing circles in the water.

The newlyweds are actually a pair of freedivers from Irkutsk - Natalya Chernykh, 49, and Dmitry Sokolov, 50. 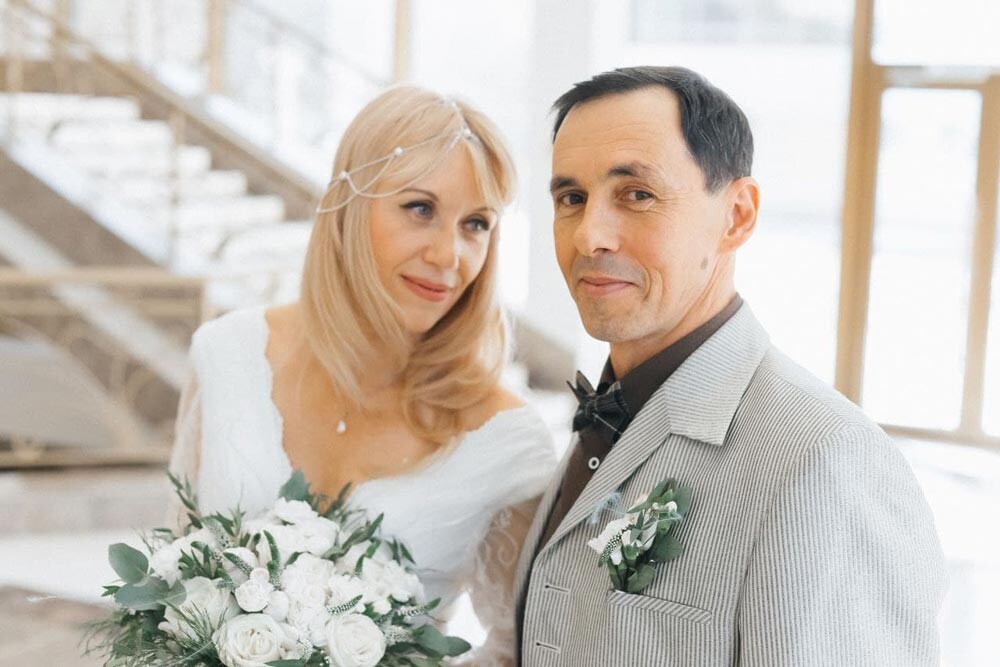 Natalya is the 2019 Irkutsk Region and 2020 Krasnoyarsk Krai free diving champion. Dmitry is Russia’s 2019 breaststroke silver medalist and also holds a master of sports qualification in freediving. He also made it into the Guinness World Records, as well as the regional one, after diving to a depth of 100 meters underneath the ice without an oxygen tank.

Dmitry and Natalya met in April 2018 while attending a swimming pool masterclass in underwater hunting, where Dmitry noticed Natalya’s athleticism: she’d been swimming since age nine, before transitioning to speed diving and underwater orientation. After class, he asked if she wanted to try her hand at freediving. 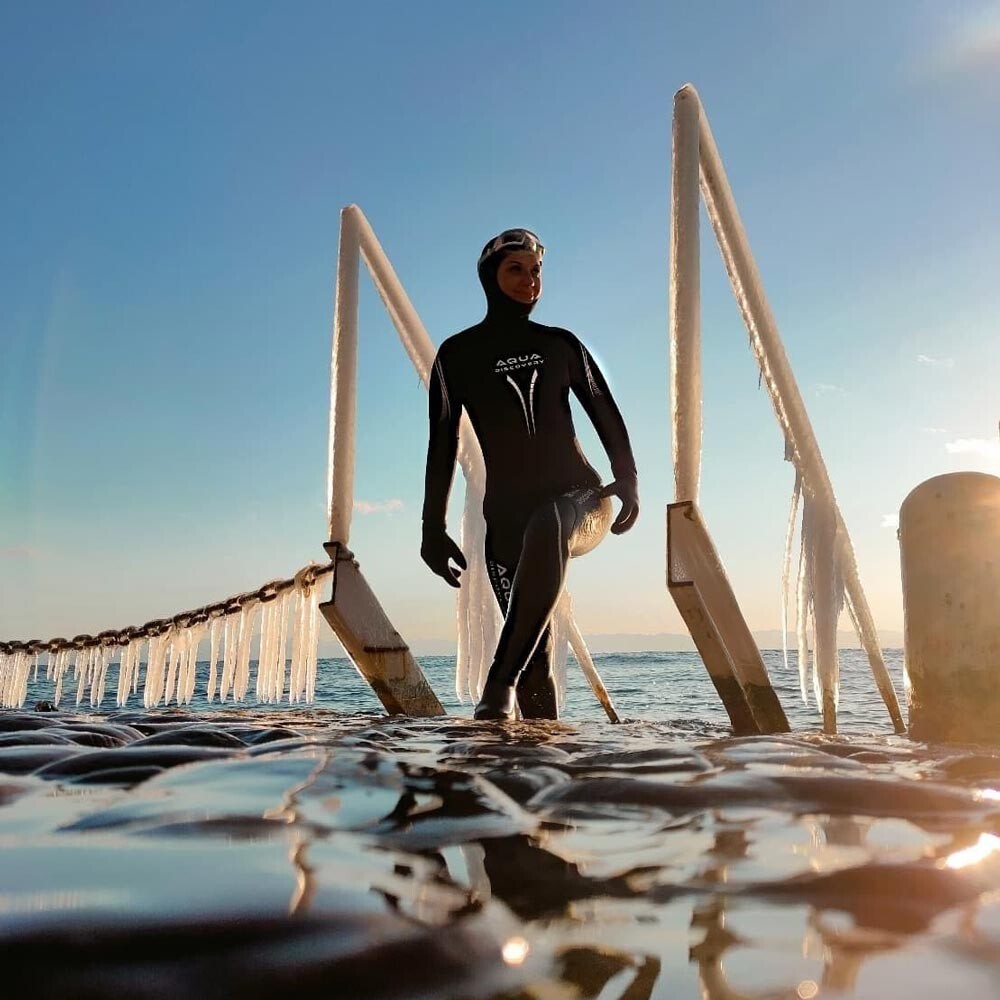 “I thought: why would I want something like that? I’m 45, my child is seven, he requires my attention. Why would I train three times a week, going from Angarsk to Irkutsk, which is a 40 km drive? Dmitry had to persuade me repeatedly by phone before I finally decided to undergo introductory training,” Natalya remembers.

As someone who likes to try new things, she agreed and the two have been together ever since, gradually beginning to date. And, in 2020, Dmitry proposed. 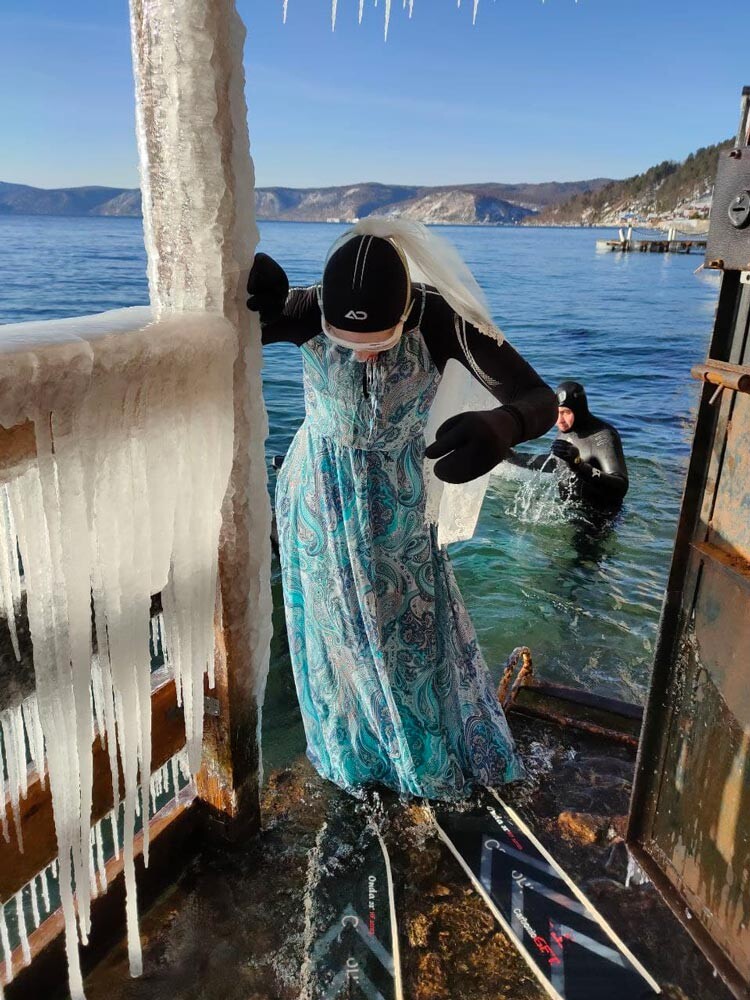 “He suggested we meet for a walk down an embankment in Angarsk. We have a designer tree there, which young people use for hanging locks. Dmitry stood on one knee under the tree and opened a box with a ring. It came as a complete surprise,” Natalya recalls.

The couple tied the knot in November 2021, having a regular wedding ceremony; then, a month after that, rehashed the whole thing underwater (which they initially planned on doing). 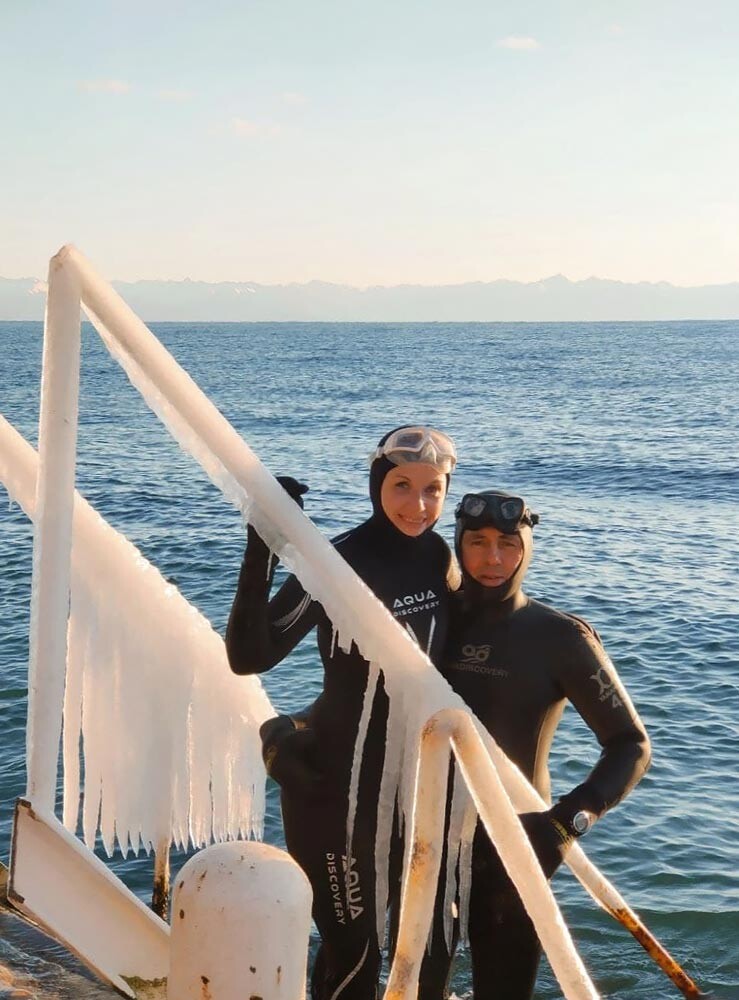 Ten freedivers submerged themselves in the depths of the Baikal together with the newlyweds, circling them in traditional khorovod fashion, wearing sundresses. According to a preplanned scenario, the couple waited for the command to dive, before making clockwise circles, as the rest of the freedivers swam counter-clockwise circles around them. Natalya’s wedding dress didn’t fit the thick 9-mm wetsuit, so she had to wear a loose sundress and wedding veil.

“It looks so ridiculous on land, but really beautiful in the water,” she says. “Although the veil kept getting unfastened and disappearing in the water. Dima had to dive down and recover it numerous times, reattaching it to my mask.” 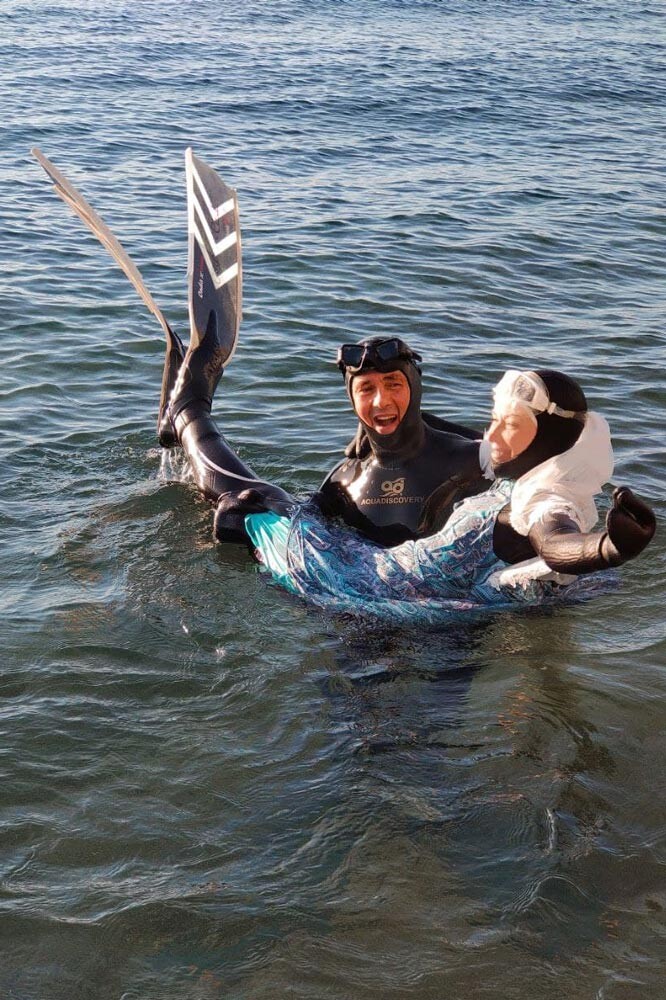 According to her, some guests kept losing their skirts and frequently ran out of breath during the lengthy underwater parts of the ceremony, so it was difficult to achieve total synchronization. 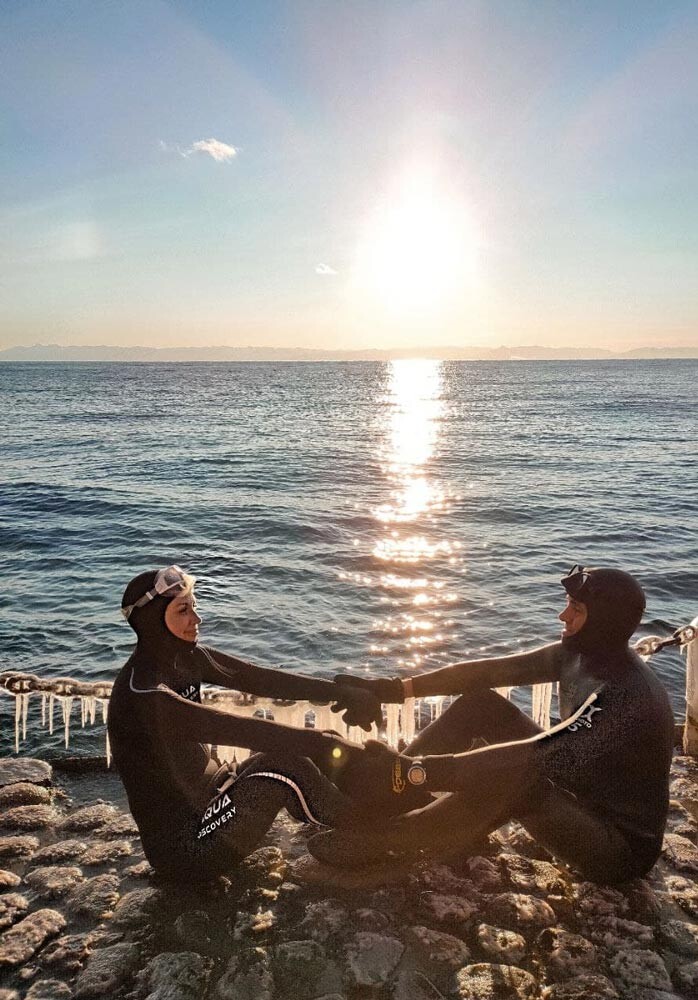 After the diving portion was completed, part of the group went swimming to the Shaman’s Rock, a protected area in the Baikal. The couple then went to the banya, before rejoining the guests after their swim for barbeque and cake. 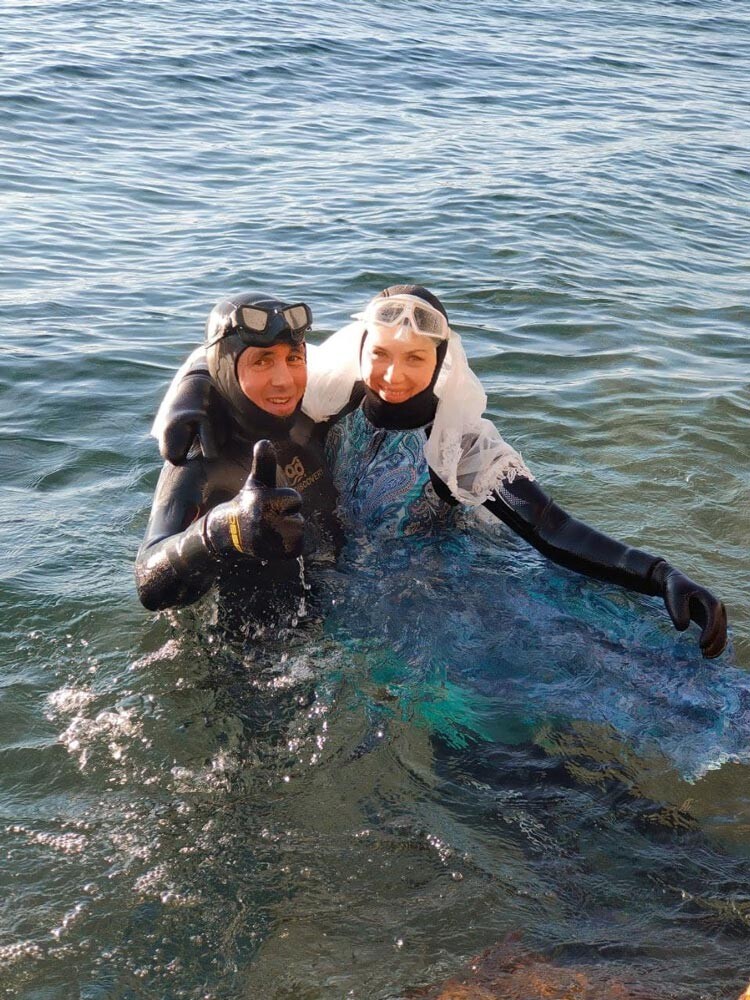 “All in all, it played out quite spontaneously. While the ceremony on land took thorough planning, the water-based one felt more like a fun rehearsal - it would be nicer to have the underwater portion during the summer… But it’s still great that we went through with it,” Natalya concludes.