How Christmas was celebrated in tsarist Russia (PHOTOS) 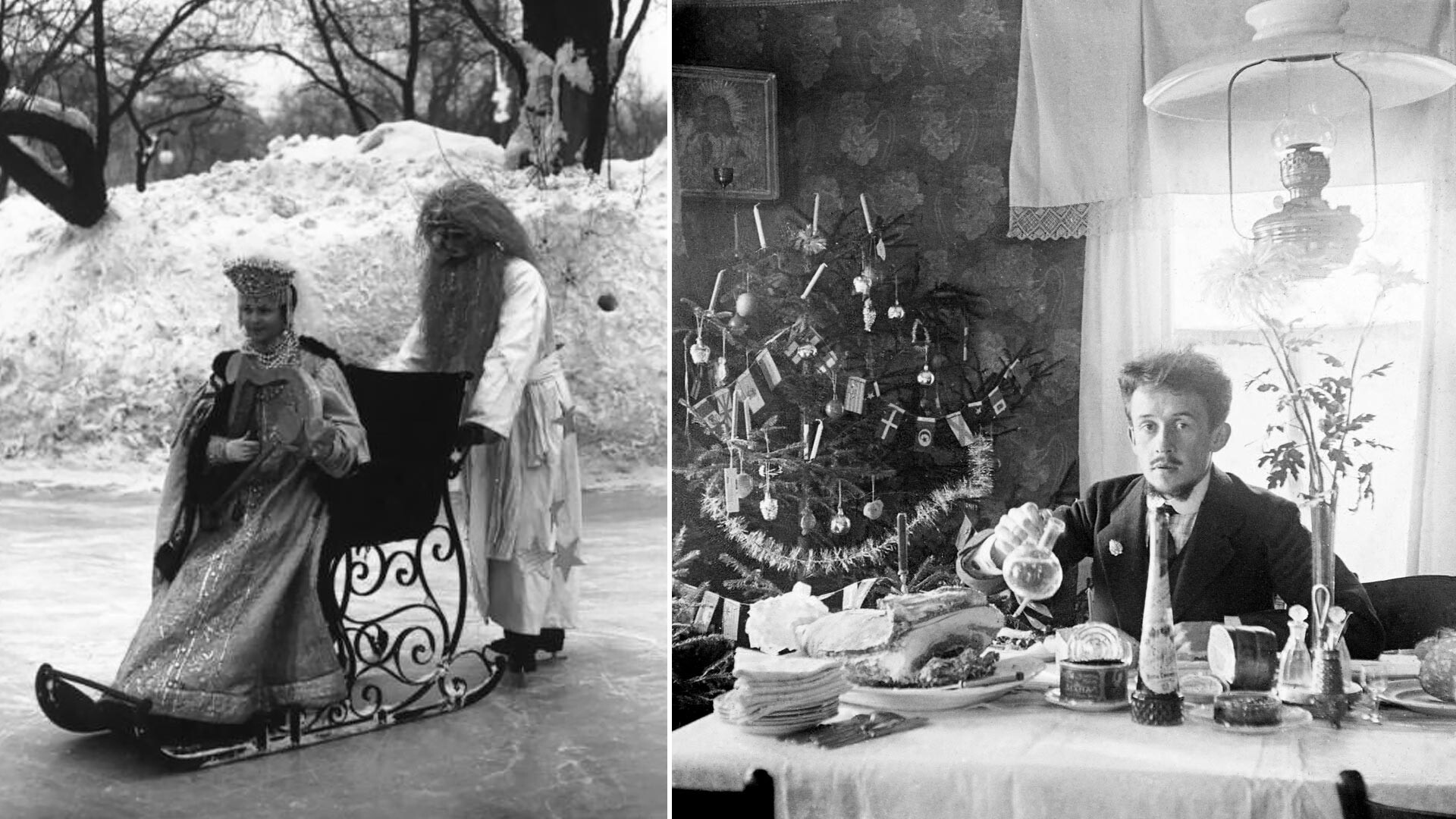 MAMM/MDF; Georgy Nedosytov/Alexander Akilov archive/russiainphoto.ru
The Bolsheviks abolished the old Christian tradition of celebrating Christ's birth and instead introduced a lavish secular celebration for New Year. But what was Christmas like before the 1917 Revolution?

For people who were born in the USSR and residents of modern Russia, the main winter holiday is the New Year, and it’s celebrated on a grand scale and often in a large group of people. There is a lot of food, including traditional mayonnaise salads, caviar sandwiches, tangerines and champagne, as well as the annual New Year address from the President that is broadcast on TV right before midnight; then followed by partying until dawn, with firecrackers and outdoor fireworks.

This is why many Russians are incredulous to hear that people in other countries often go to bed right after midnight on New Year's night (or do not celebrate the holiday at all).

Still, the Russian tradition of celebrating the New Year is not that old: it first emerged in the 1930s. The Soviet government saw it as a holiday primarily aimed at children so that they could receive gifts. Furthermore, the USSR borrowed the main attribute of Christmas – a decorated Christmas tree. Gradually, the holiday also developed into a celebration for adults, who got used to having a festive season in the middle of winter. 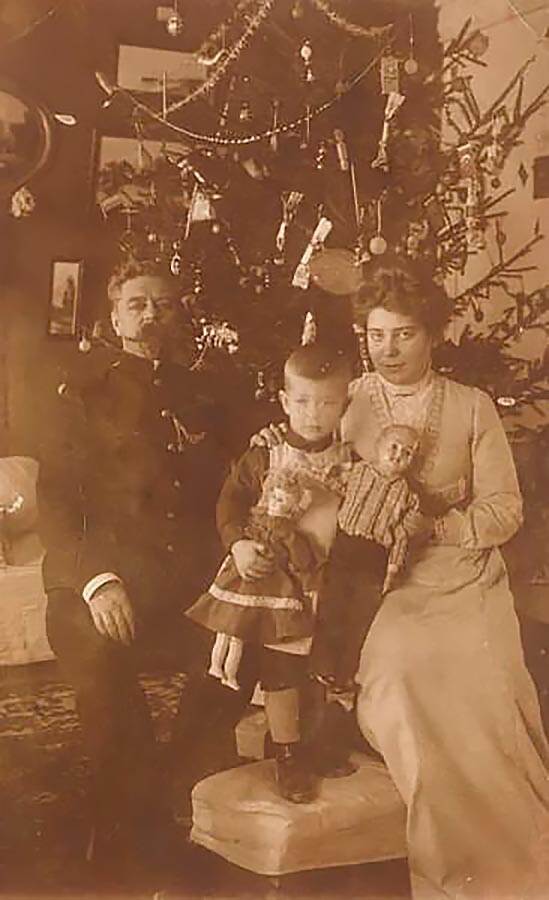 Before the 1917 Revolution, Christmas in the Russian Orthodox Church was celebrated on December 25, the same as in the Roman Catholic Church. In 1918, the Bolsheviks switched to the Gregorian calendar, and so the holiday moved to 13 days later. Thus, Orthodox Christmas is still celebrated on January 7. 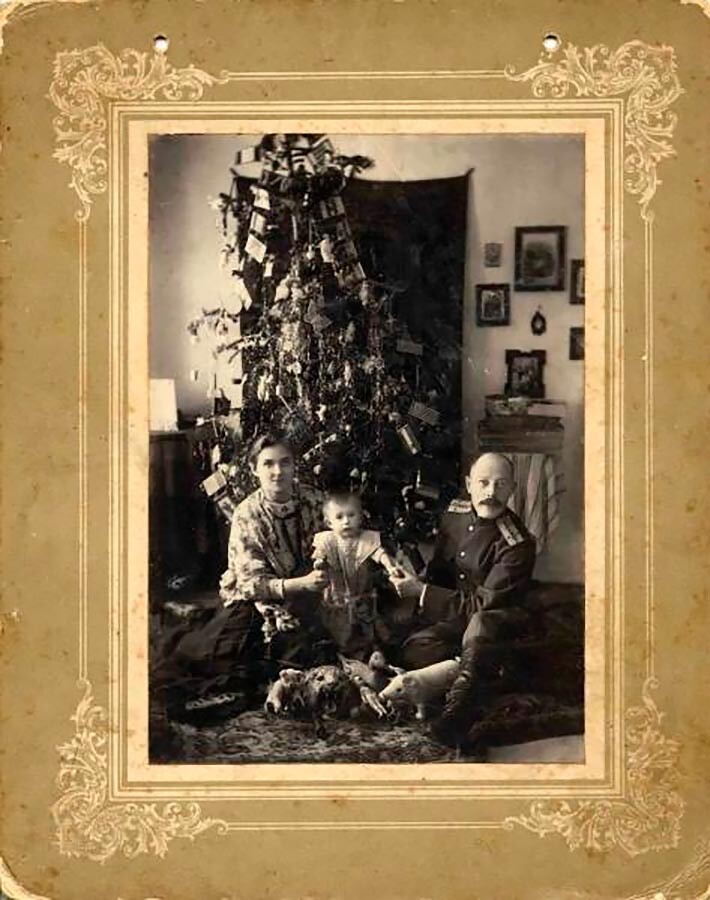 Christmas was always more than just an overnight celebration. It was an eagerly anticipated holiday. Christmas Eve marked the start of a two-week period known as Christmastide (Rus: svyatki), a time of revels and masquerades. This tradition had ancient Slavic roots. 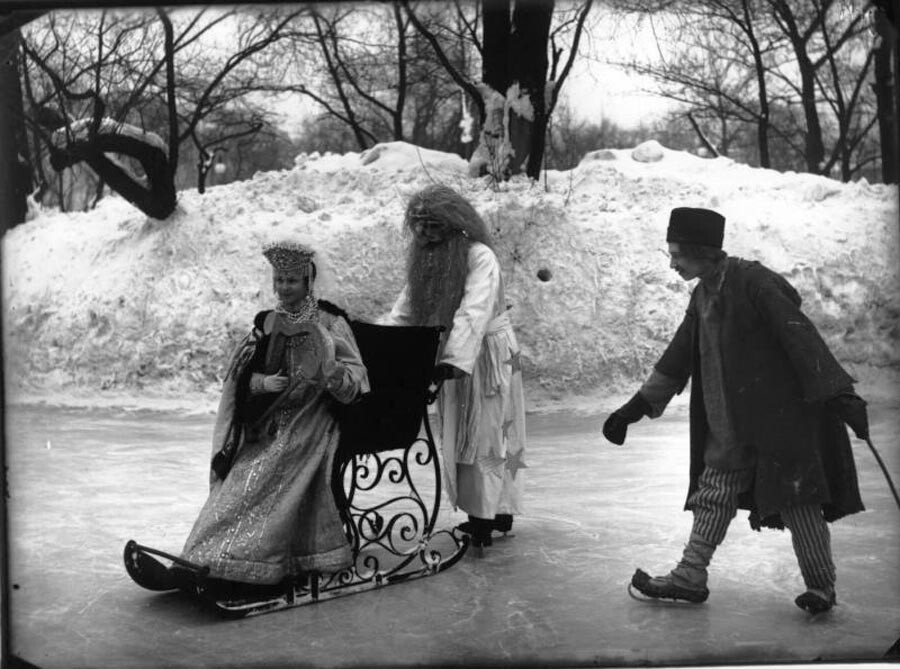 This is how Leo Tolstoy describes this merry time in his novel War and Peace: “The mummers (some of the house serfs) dressed up as bears, Turks, innkeepers, and ladies - frightening and funny - bringing in the cold from outside and a feeling of gaiety, crowded, at first timidly, into the anteroom, then hiding behind one another they pushed into the ballroom where, shyly at first and then more and more merrily and heartily, they started singing, dancing, and playing Christmastide games." 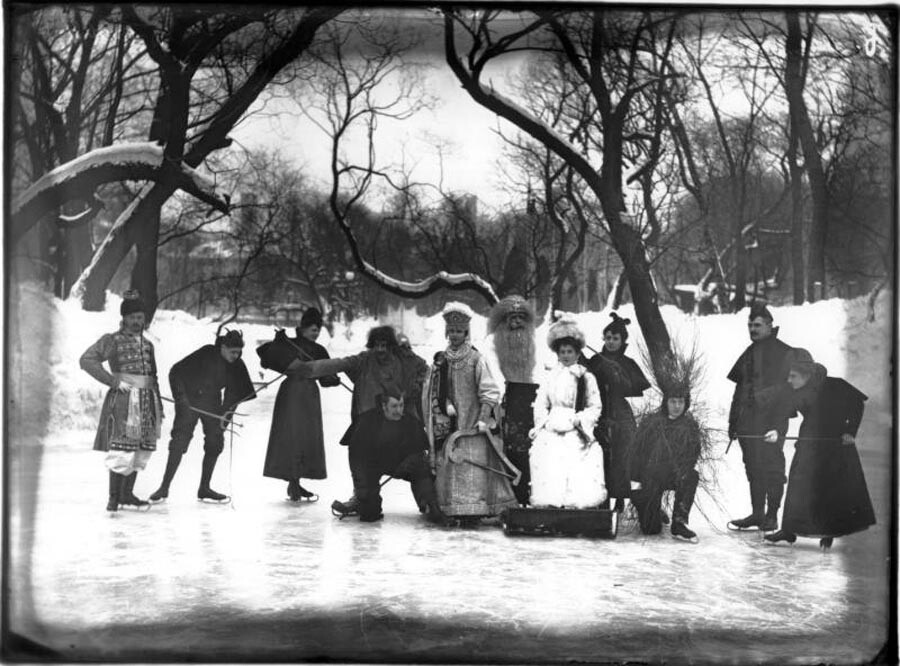 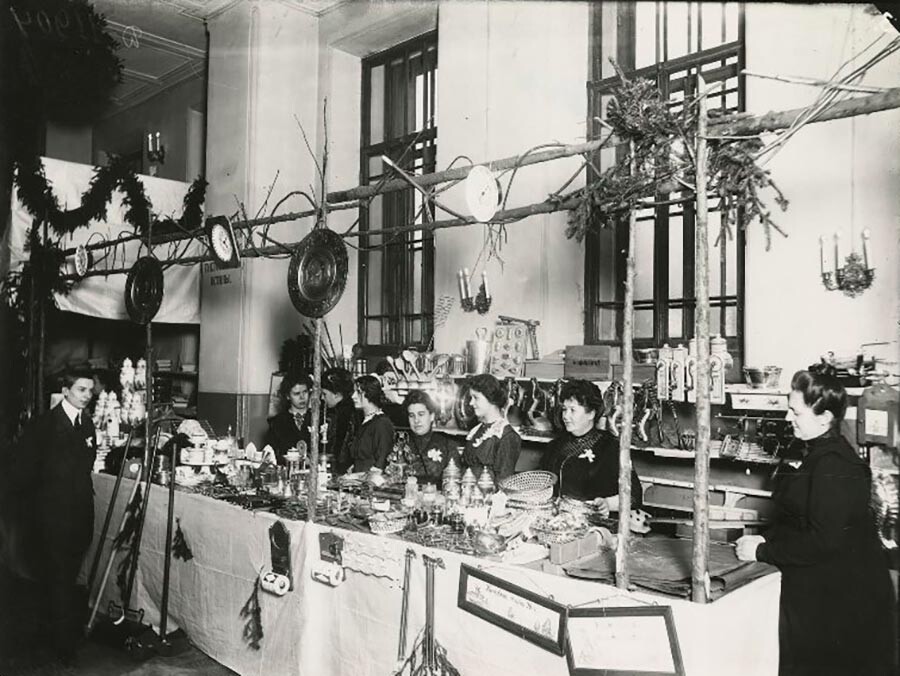 The main thing was to make sure that all the children received gifts. City officials often arranged gifts for poor and homeless children. 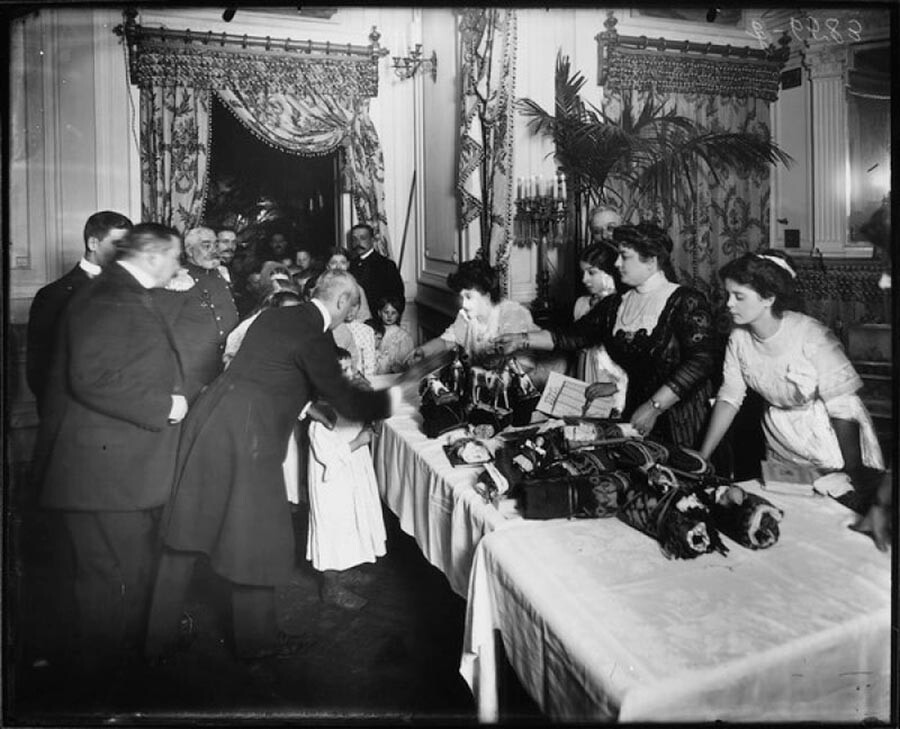 In the late 19th and early 20th centuries, it became fashionable to send Christmas cards. To ensure timely delivery, senders wrote and posted their cards well in advance. Interestingly, famous artists were often involved in the design of Christmas cards. The tradition was adopted in Soviet times as well. 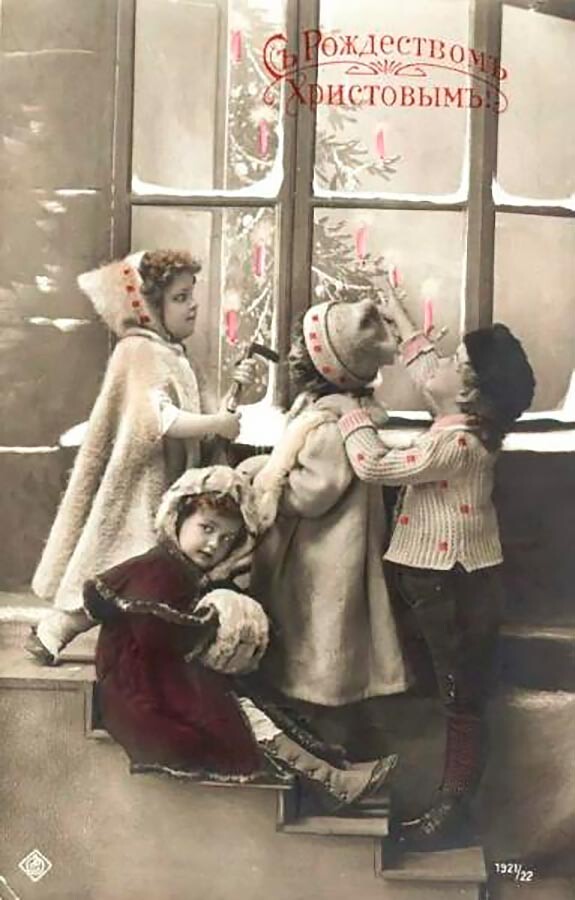 Selecting a Christmas tree was also an important event. In upper-class families, it was usually done by a servant who went to the forest to pick a tree, while representatives of the lower classes did it themselves. 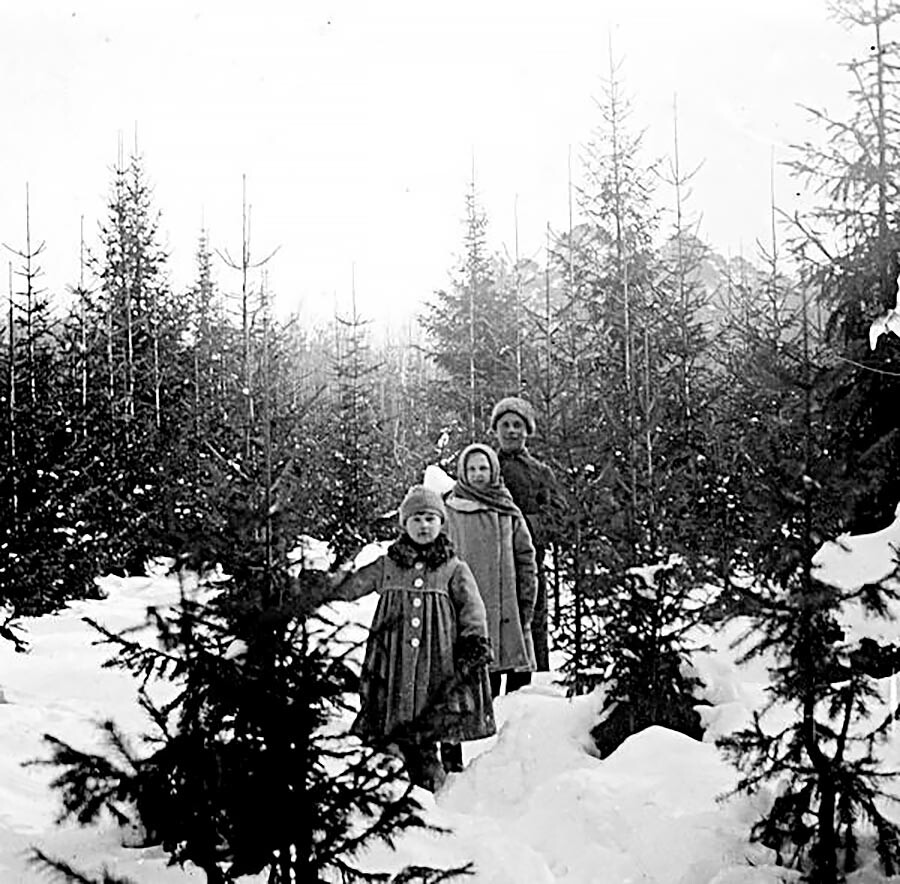 Those who lived in the cities usually bought their Christmas trees from special bazaars, which are not unlike the ones you can see in Russian cities today. 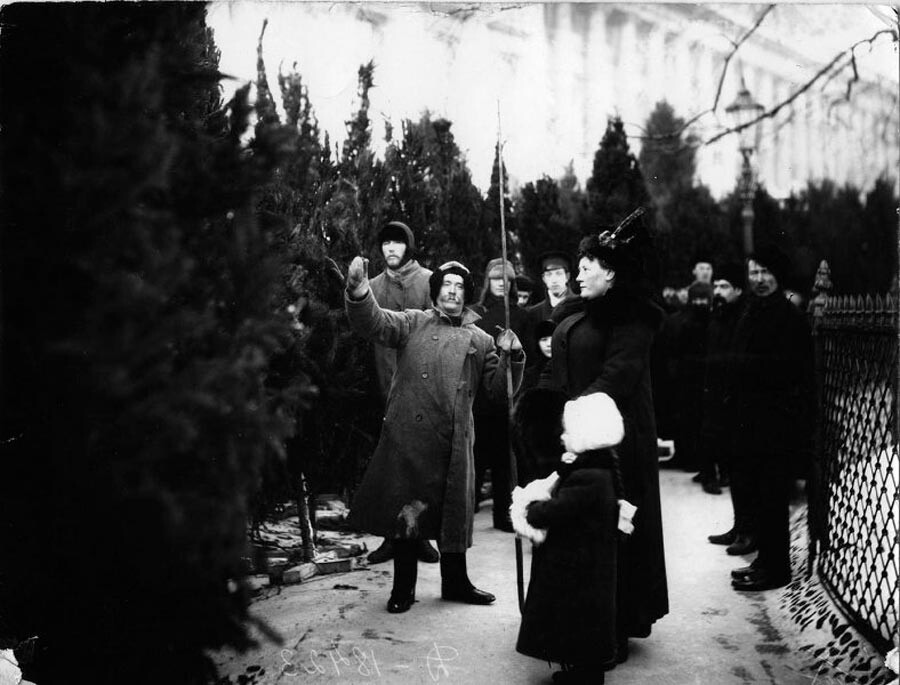 However, transporting a large tree to one's place was not always easy and usually involved the use of a horse-drawn vehicle, either hired or one's own. 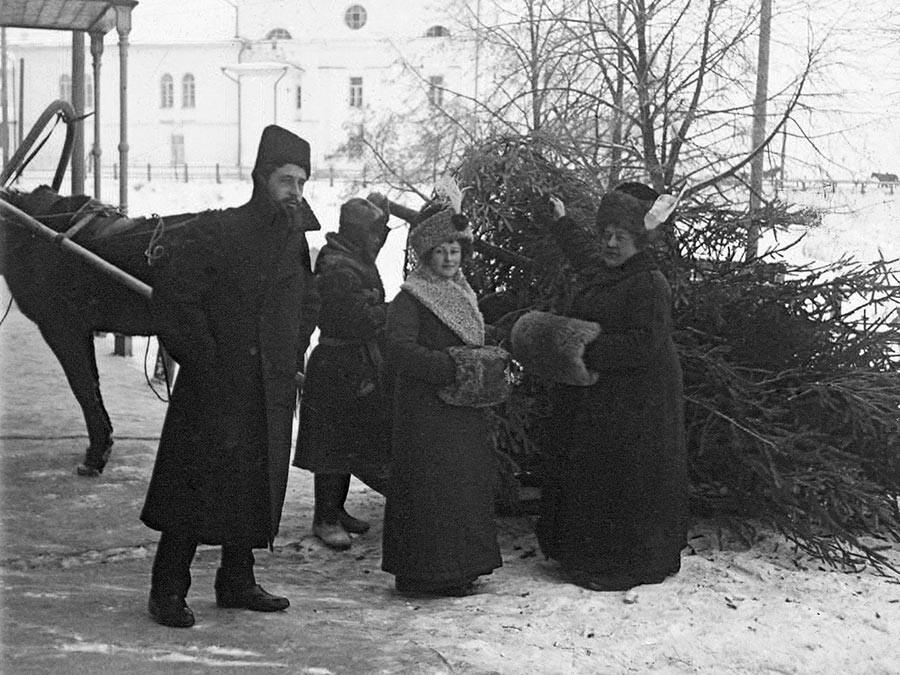 The Christmas tree was usually decorated in secret and hidden from the children. When everything was ready, they were summoned with a bell to see this Christmas miracle in all its glory. They were often very impressed! 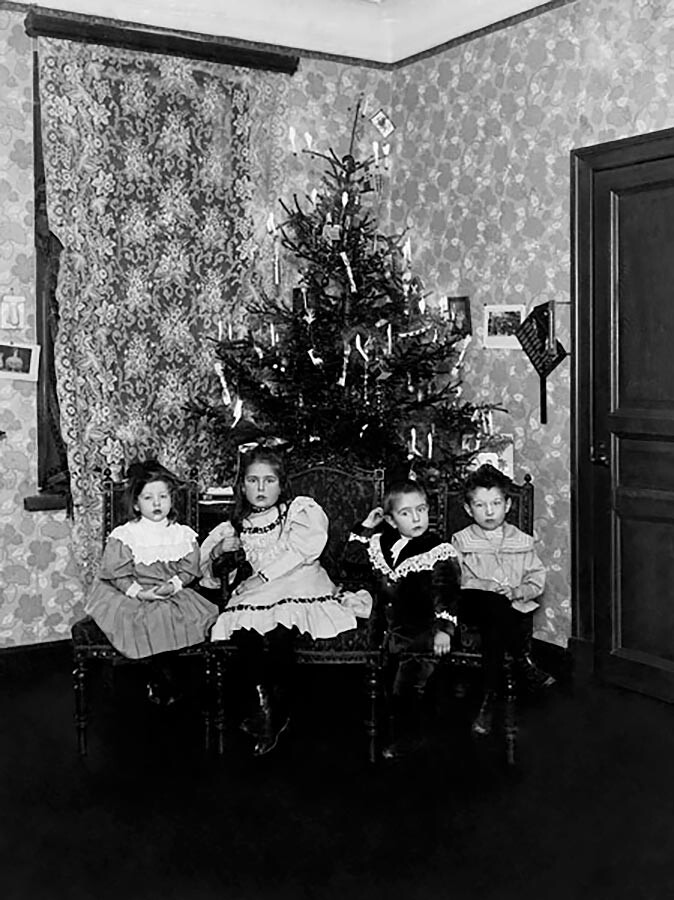 This is what Leo Tolstoy wrote about Christmas in 1870: “On Christmas Day there was a magnificent Christmas tree. Hannah and I together with the children had wrapped nuts in gold paper, dressed up dolls, made boxes and flowers. The Dyakovs brought a huge number of wonderful toys that had so tastefully and lovingly been chosen by our dear friends. During the day we all went skating... and the mood was unusually cheerful and happy." 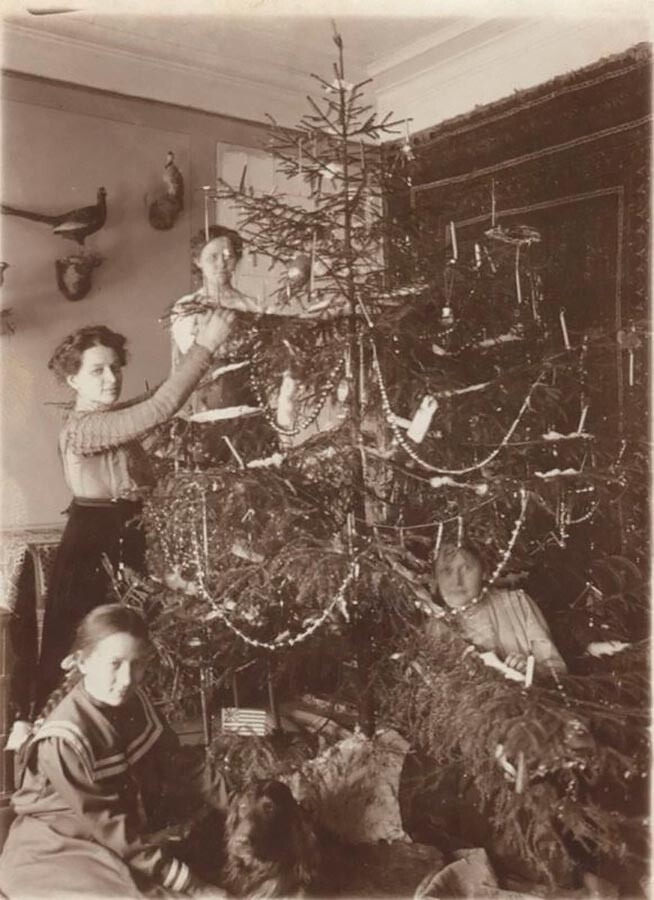 "From time immemorial the Sventitskys' Christmas parties followed the same pattern. At ten, after the children had gone home, the tree was lit a second time for the others, and the party went on till morning. The more staid people played cards all night long... Before daybreak they would all have supper together," was how Boris Pasternak described Christmas celebrations in an upper-class family in the early 1900s. 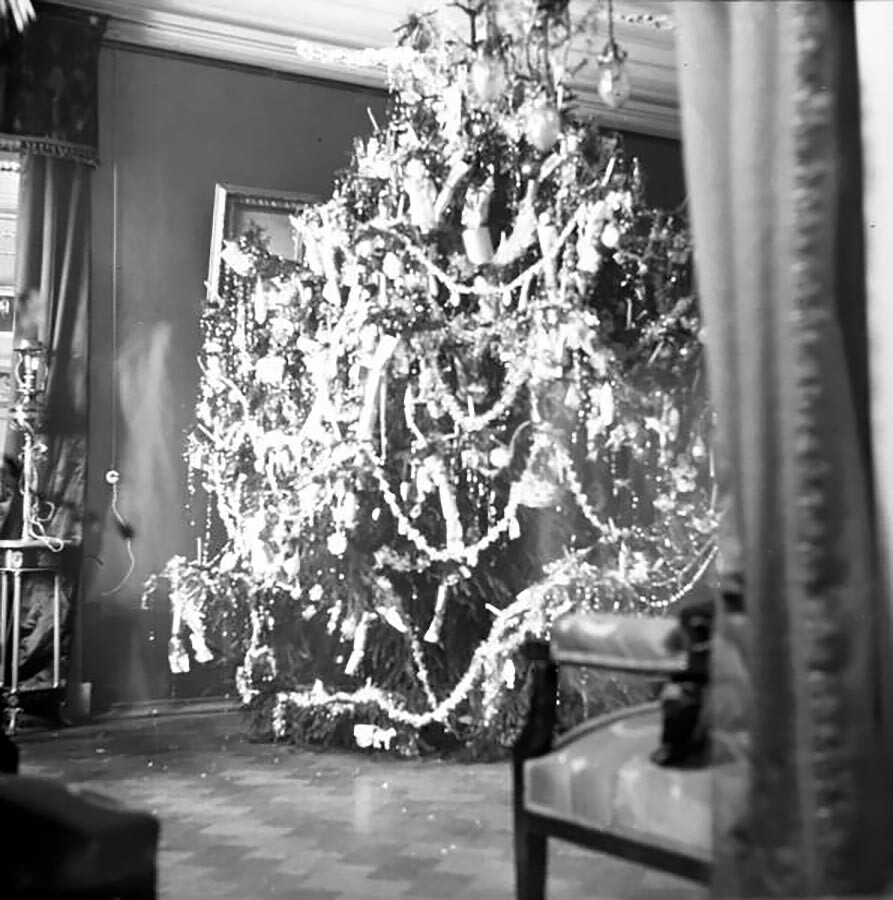 "Rustling their dresses and treading on each other's toes, those who were not dancing but walking and talking moved like a black wall past the hotly breathing Christmas tree with its several tiers of lights. In the center of the room the dancers twirled and spun dizzily," Pasternak wrote. 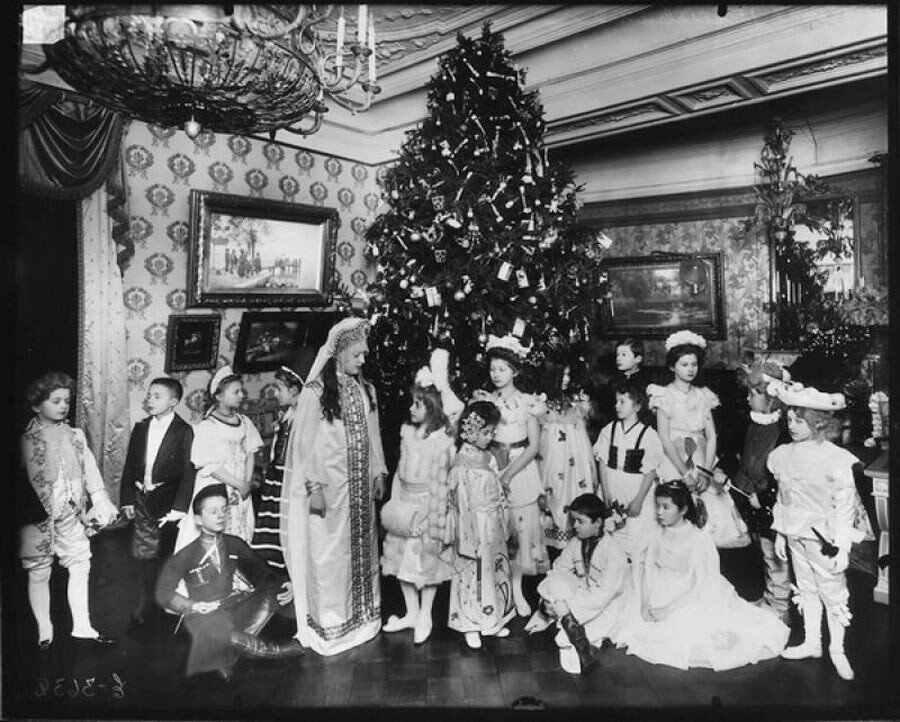 The Christmas dinner was another important part of festivities, with the planning and preparations done well in advance. Christmas was preceded by a strict fast, so the feast that broke it usually featured ham, caviar, and pies with different fillings. 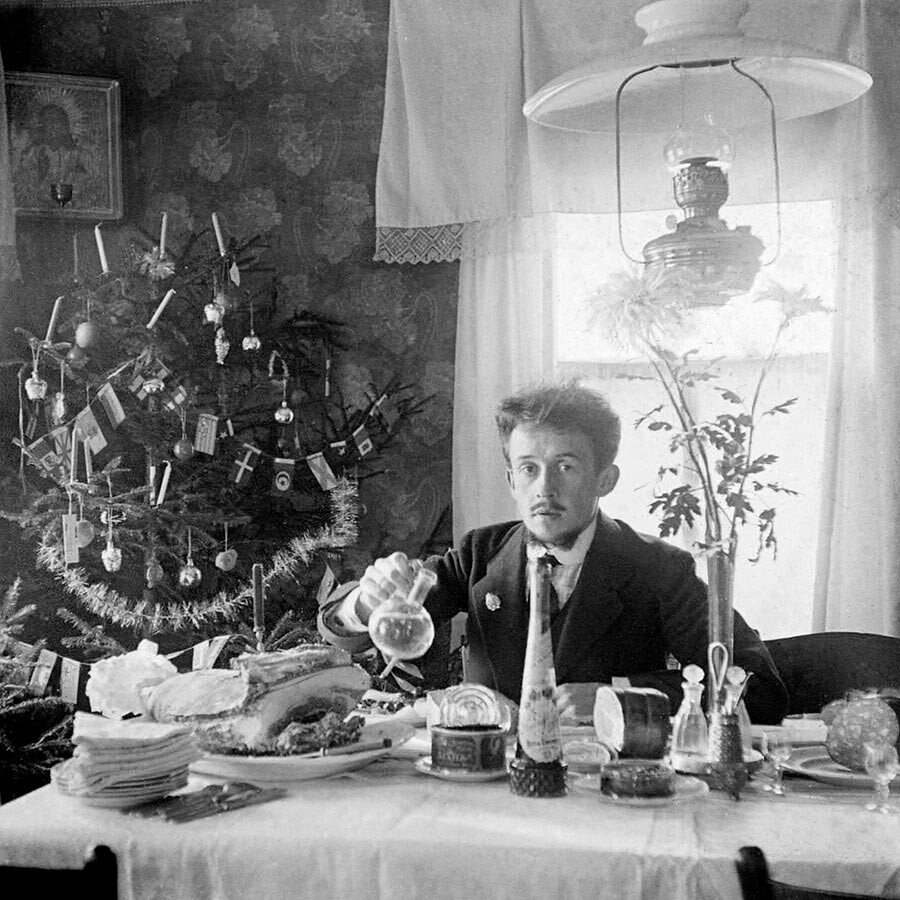 Christmas dinners and receptions were held until the New Year. 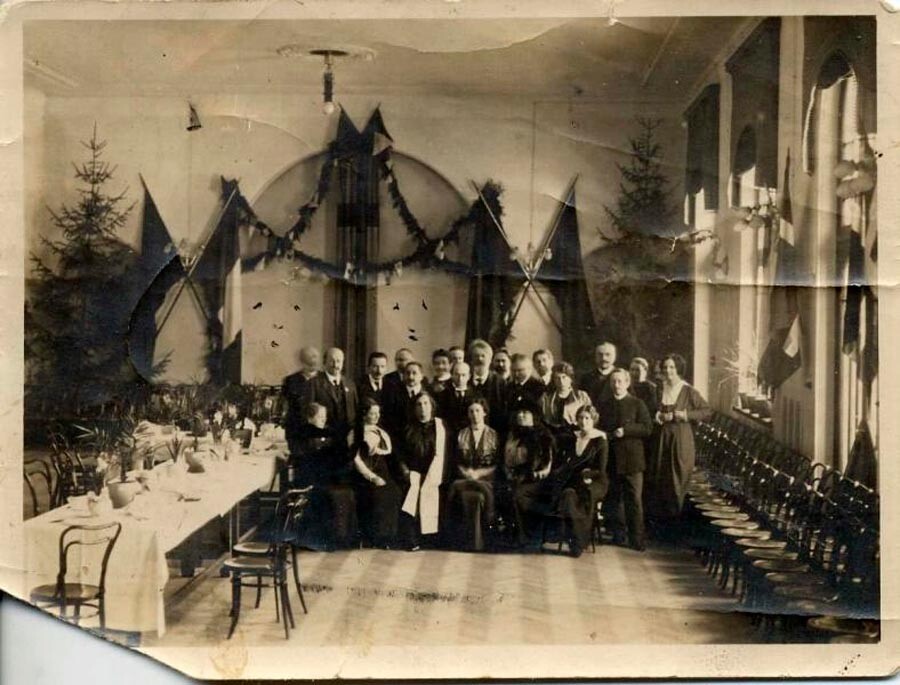 Christmas was not forgotten even at the war-time front. Wherever they went, Russian troops had regimental priests. During World War I, in 1914, an impromptu Christmas truce was observed. In that year, Russian Orthodox believers still celebrated Christmas on December 25, the  same as Catholics and Protestants. 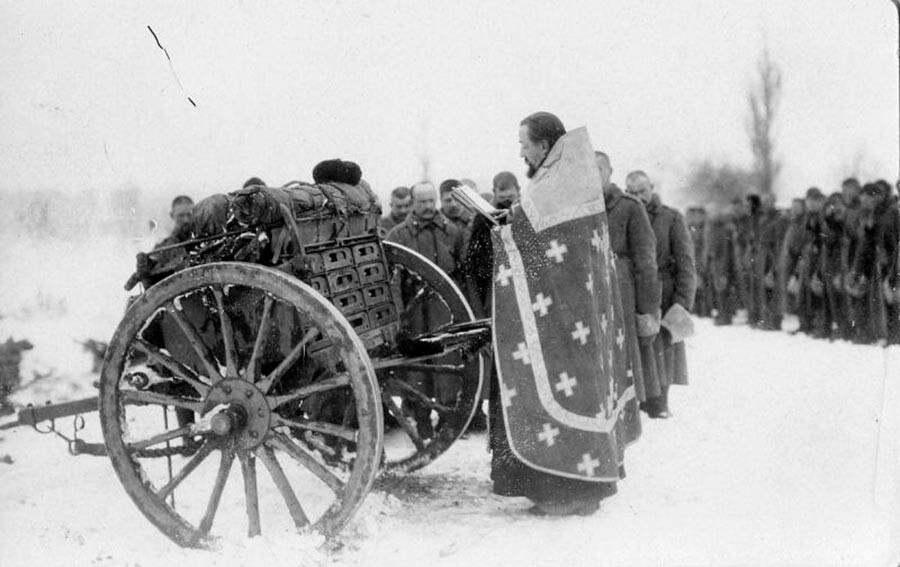