5 facts about yevrazhkas, the fluffiest ‘hooligans’ of Russia’s Far East 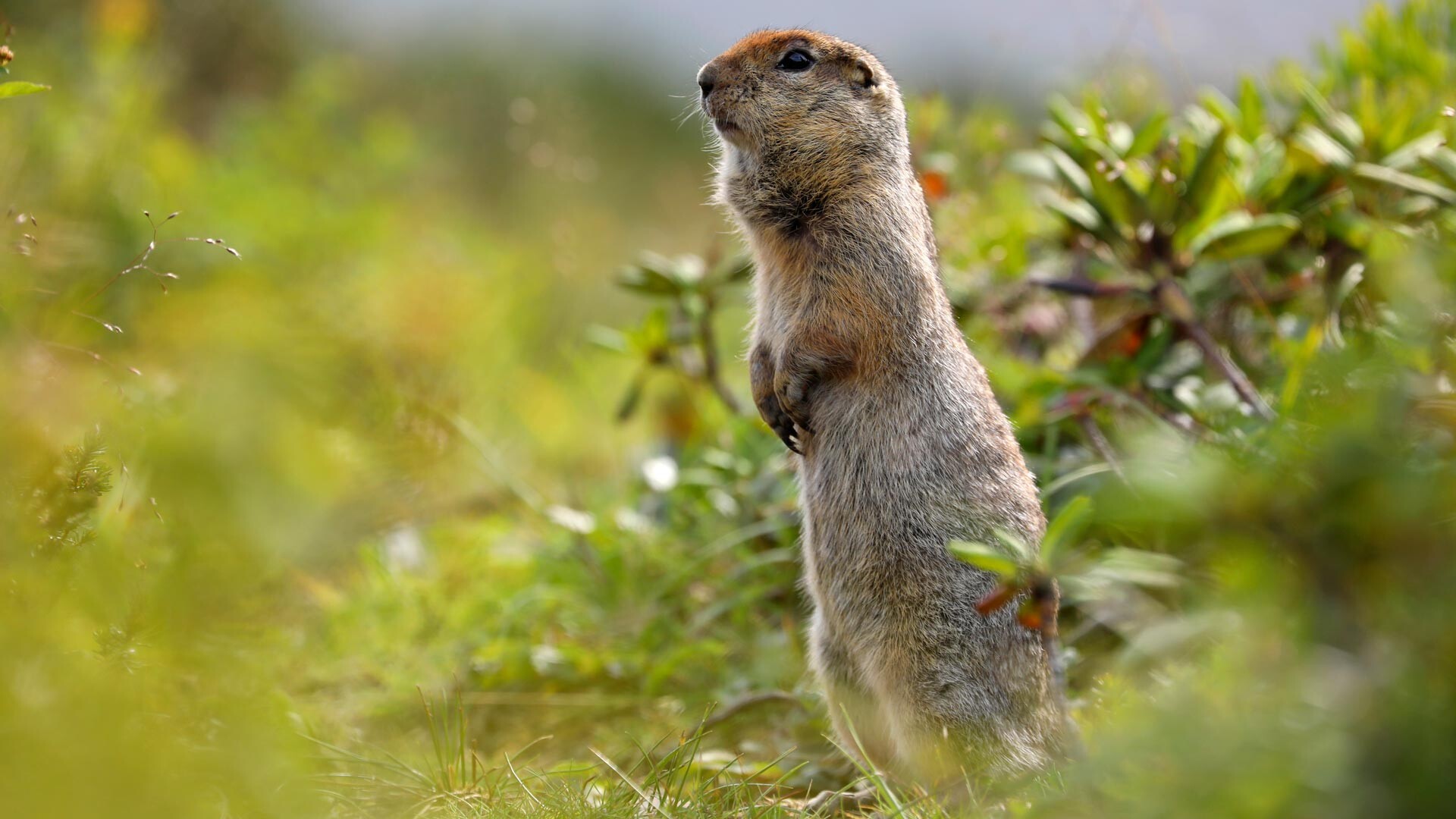 It's time to grab some food...

Yekaterina Shtukina/TASS
All tourists visiting Chukotka and Kamchatka in the Russian Far East are fascinated by these small animals. People are ready to cuddle and share any food they have with them, but it is better not to do so!

Any tourist exploring Kamchatka’s volcanoes and Chukotka’s stunning landscapes in the summer stands a good chance of coming across this animal. Officially, this small, furry animal, averaging 30-40 cm in height and weighing less than a kilogram, is officially known as the Arctic ground squirrel. In Russia, it is called the American, or Beringia, ground squirrel, since it lives in the Russian Far East, as well as in Canada and Alaska. But it is much better known under its popular nickname, yevrazhka. 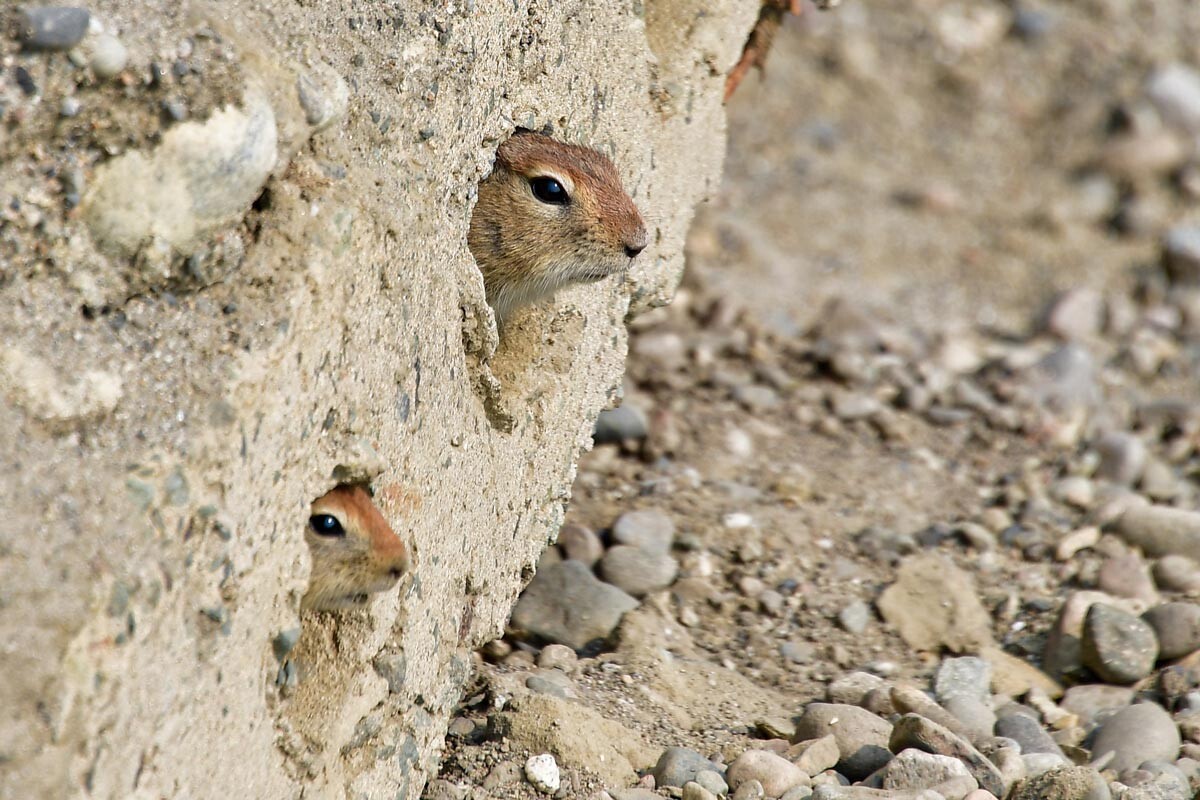 Hello, tourists! What do you have for us?

The animals that tourists are most likely to come across in the Russian Far East are not bears or polar foxes, but these small rodents. Yevrazhkas are often referred to as robbers, because they can sit in ambush in the most unexpected places and wait for humans to appear. Their sole goal is to get hold of some food. It should be noted that they go about this task in a very civilised manner: if you stop for a rest somewhere in the mountains, first you will be approached by one hungry yevrazhka, looking at you with its sad, imploring eyes, like the puss-in-boots from Shrek, then it will be joined by another. And while you are filming your TikTok videos, you won’t even notice how all your food is suddenly gone! They have a well-rehearsed operation going there.

2. They have no fear of humans 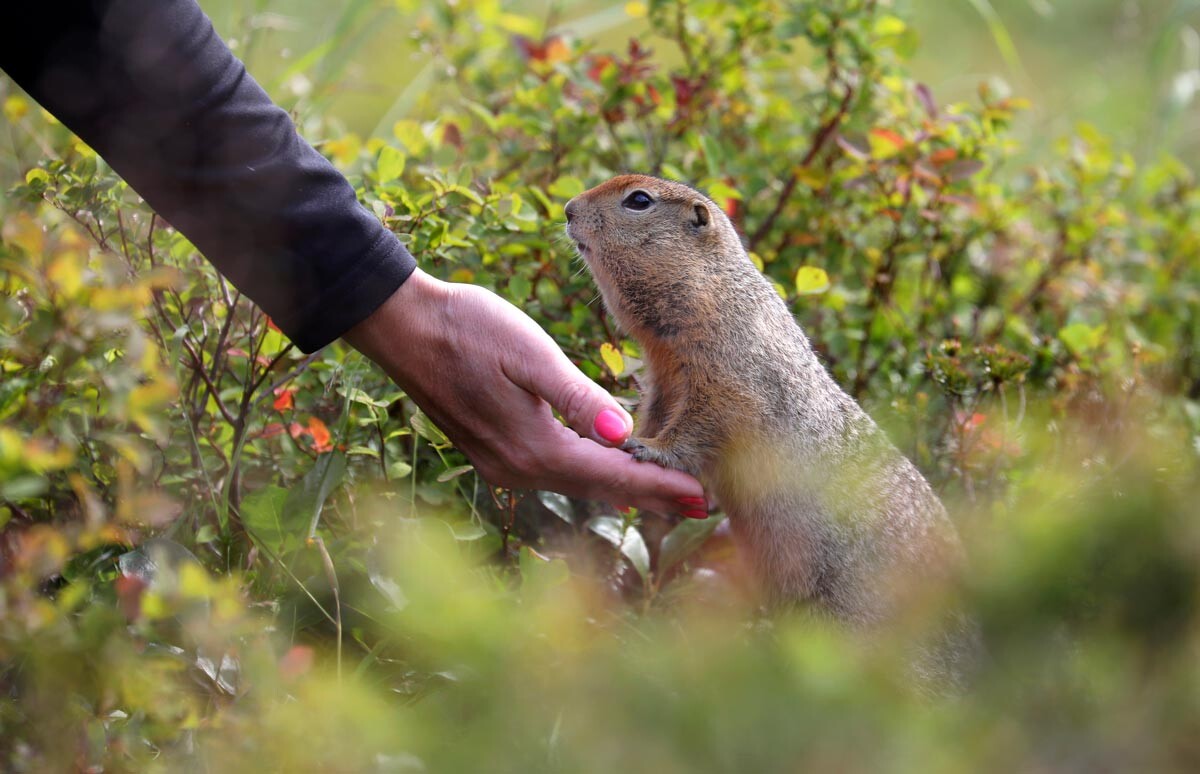 Why is your hand EMPTY?

Usually, wild animals hide from people, sensing danger in them. But not yevrazhkas! Among all the animals of the Russian Far East, they are the most sociable. They approach humans immediately. Which is not the case with dogs, from whom yevrazhkas usually hide in their burrows. Tourists say that yevrazhkas even “troll” dogs. “Dogs see a ground squirrel, run after it, it whistles and runs into its burrow, while another yevrazhka sticks out from another burrow, whistles, the dogs see it and run towards it. I saw with my own eyes how in half an hour they drove a couple of dogs to exhaustion and the dogs lost all interest in them,” one tourist recalled.

The noise yevrazhkas make is very similar to bird chirping – which sounds rather odd, given what they look like. As a rule, they make a sound when they sense danger, thus warning fellow yevrazhkas. However, in this video, a yevrazhka is chirping in response to human speech.

Remember: never stroke a wild animal - it may bite and it may have rabies!

4. They love sleeping and eating 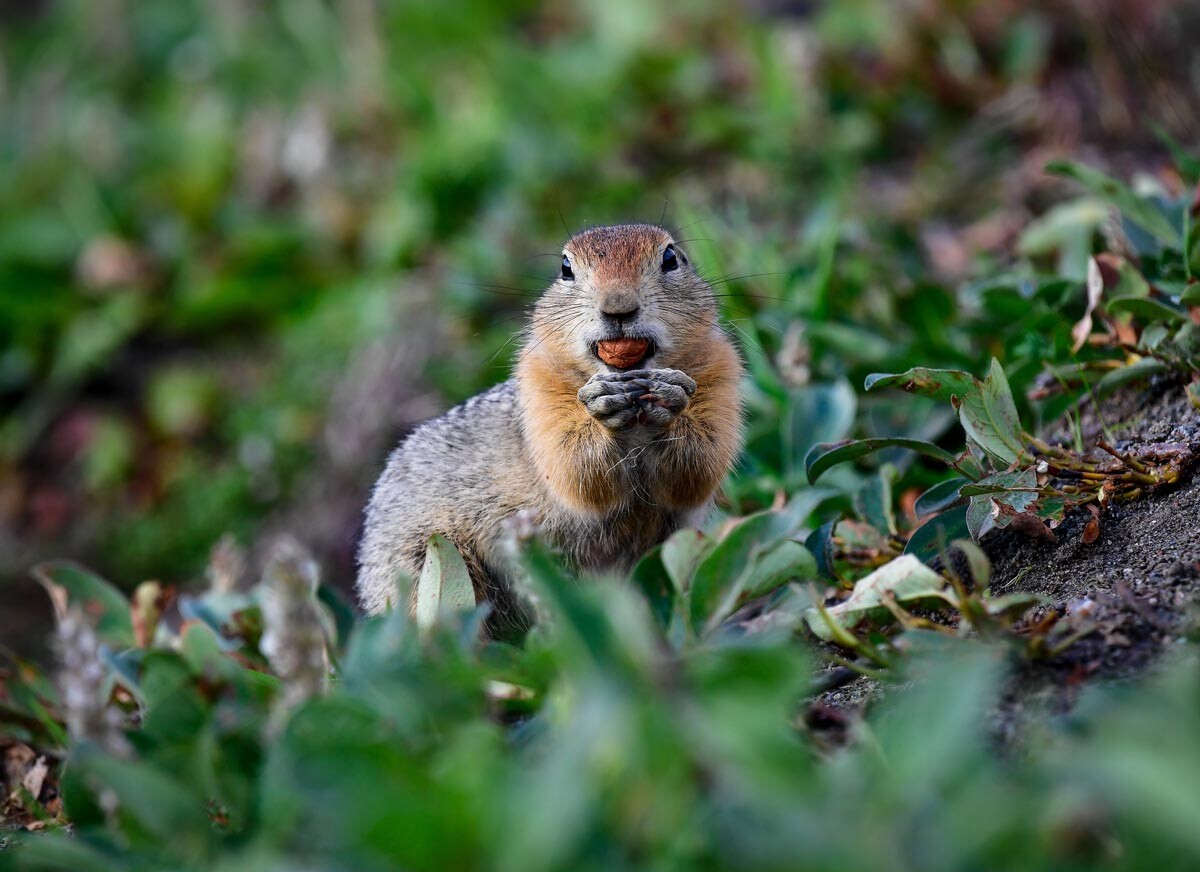 Will save it for the winter!

Yevrazhkas’ two favorite pastimes are sleeping and eating. They sleep for up to eight months a year, so the only time you can come across them is during the short polar summer. They hibernate from September to May, in burrows three meters deep (can you imagine what it is like to dig such deep burrows in permafrost?). During hibernation, they lose about half of their weight, so, as soon as they wake up, they immediately go searching for food. Yevrazhkas are omnivorous, so they readily eat berries and insects alike. And they are not averse to human food either, if they can get it.

5. They can die from overeating 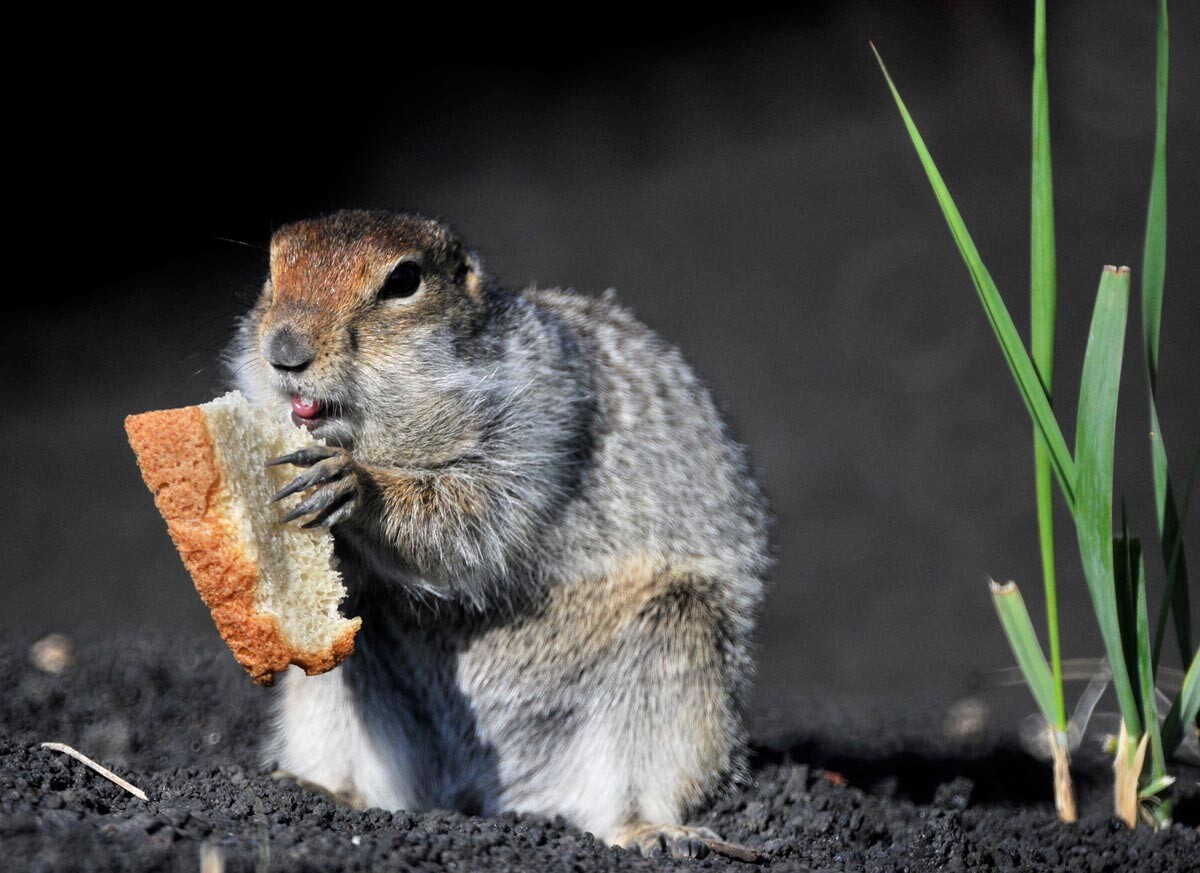 For tourists, feeding a yevrazhka is part of the local experience. But zoologists say that it is better not to feed them at all: otherwise they will breed in tourist places instead of looking for food in the wild. Over time, this will attract predators to these locations, which will ultimately lead to the extermination of the yevrazhka population.

Arctic ground squirrels eat anything that smells good and is edible, but it is not necessarily good for them. They steal cheese, chocolate and nuts from tourists and are particularly fond of sweet crunchy cookies. But experts say that yevrazhkas should not be given any sweets no matter how much they ask for them. The reason is not only the ingredients, but also that yevrazhkas can die from overeating. If you find it very difficult to refuse them, just give them some nuts, however, only raw ones!